Roadside St. 12 Jack Bauer, no, not the one on the TV – the real one, cooler than that Sutherland guy. The former Kiwi elite national champion has stepped up from Scottish Continental team Endura to the big time with US World Tour outfit, Garmin for 2012. And if you’ve been watching the Giro on TV then you’ll be aware that the man from the other side of the globe is a major part of the Garmin pink machine. We caught up with Jack just before stage 12 to Sestri Levante where the team buses parked up outside a marble cutting yard. 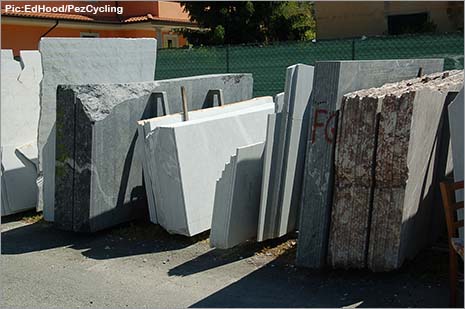 Marble is the choice of flooring for most Italians – there aren’t many carpet shops in Italy.

We started by remarking on how skinny he’s looking; 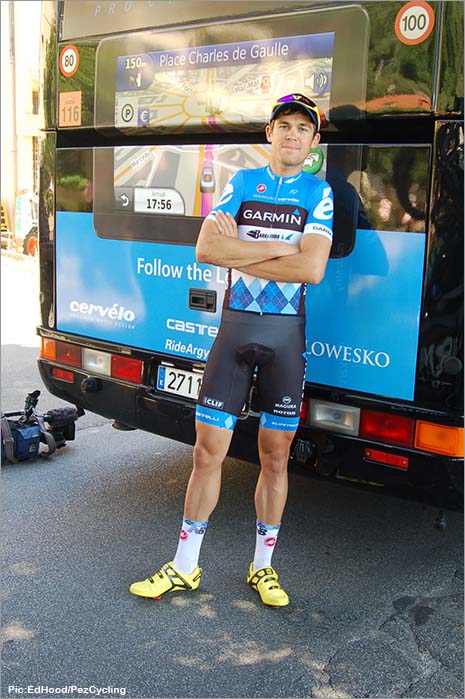 ‘Yeah, well, I heard there are a few hills coming up!’

We asked about how he’s enjoying the razzamatazz of the Giro;

It’s my first Grand Tour, my longest race prior to this was the Tour of Britain, which is only eight days.

I came into it with an open mind – but it’s uncharted territory for me, now.

But the thing which really stands out for me is how the local people are behind the race.

There’s folks holding up babies and there’s old, old folk with walking frames, all out watching the race in every town and up in the hills.’

We mentioned that it seems like most times you turn on the TV and the peloton is riding tempo, it’s Jack in his yellow Oakleys at the front. 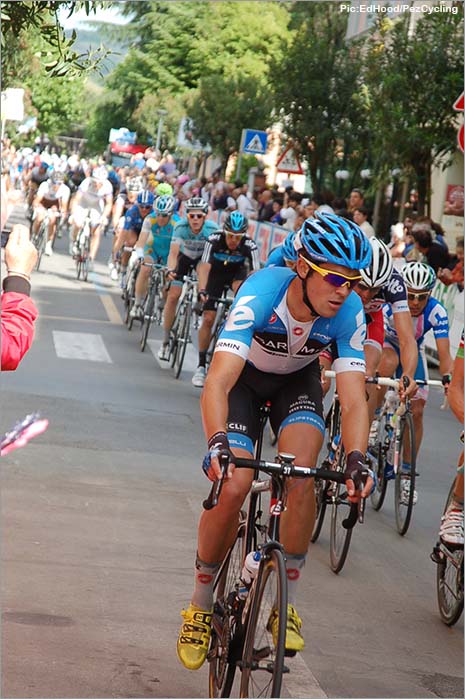 ‘I like having a job to do, Ryder is in great form and my roles is to support him, deliver him and let him finish the job.

I usually ride tempo towards the end of the stage, taking Ryder into the final climb

I provide his food and drink during the stage, help with his clothing and positioning him.’

And was that TTT as savage as it looked?

‘It was the most painful 30-odd minutes I’ve ever spent on a bike!

From the first minute to the last it hurt – but it was fantastic to be one of the counting members of the team. 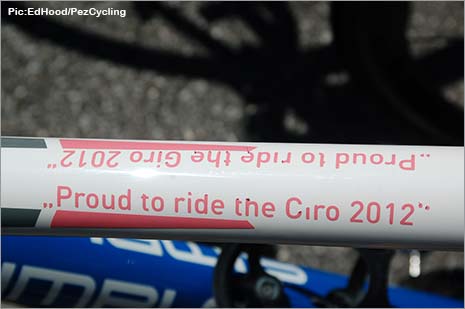 In fact, I’m really happy just to be one of nine guys selected to ride the Giro from the 30 on the team.

Our winning margin was only five seconds – but the team is so fastidious in it’s preparation for team time trials.

We had so much support – the guys from Giro, Mavic, Castelli and Cervelo were all there, contributing to the technical side of the ride.

Our new P5 is just an awesome bike.

I was originally going to be behind Ryder or Alex Rasmussen – that’s where I was in training and it was going well, I was comfortable on the wheel.

But then they decided, because I was going well that I should follow Peter Stetina in the race, he’s our little climber guy, so there wasn’t much shelter for me there!’

And what about that big gap between rest days ?

‘It certainly seems a bit crazy; and whilst I’ve never ridden a race of this length before, so whilst I’m not familiar with evenly spaced rest days, it’s starting to drag a little, now.

But having said that, it’s been an awesome 12 days.

Even though you wake up tired every day and your legs are sore at the start, they ride in as the stage progresses.

And we’re lucky because we have great masseurs to work with us after the stages.’

And what about the New Zealand media – are they making a fuss ?

‘There’s just me and Jesse Sergent from New Zealand on the race – we chat every day in the peloton – but as far as I’m aware, there are no media from back home on the race.

I’m not too sure about what our home media are saying – the internet connections in Italy don’t seem to be the best !’

And after the Giro ?

And I’d like to go to the Olympics – New Zealand gets one time trial and two road places, but someone has to ride both.

I’m putting my hand up for that !’

Jack Bauer, from kermis king in Flanders to key man with a World Tour squad in the Giro.

Jack’s words in the bag, we headed off northwards along the Forte dei Marmi seafront – if you’ve see the film, ‘Stars and Water Carriers,’ this is where Eddy Merckx suffered a rare time trial defeat at the hands of Felice Gimondi and Ole Ritter in the 1973 Giro.

Flat, featureless and quiet – the beach season hasn’t come alive, yet – there’s not much to photograph or report. 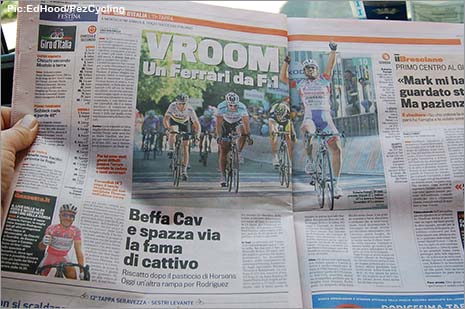 The Gazzetta gave 9/10 to Ferrari for yesterday – he won’t get that, today.

And we do get a nice pic of one of the marinas, just as we head inland and into retail park hell. 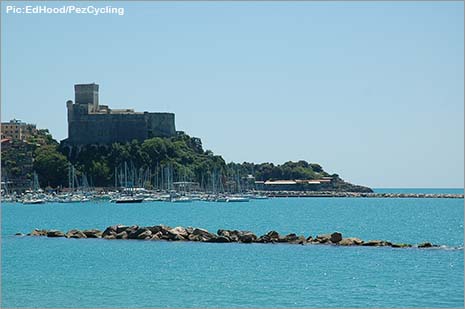 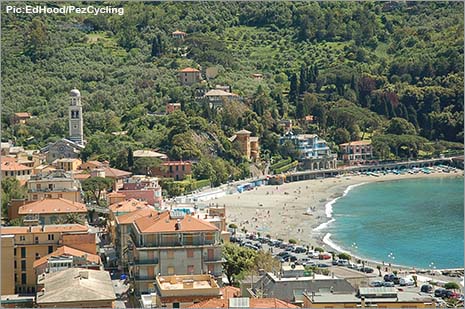 But things go scenic on us at Lerici, with glorious views across the bay. 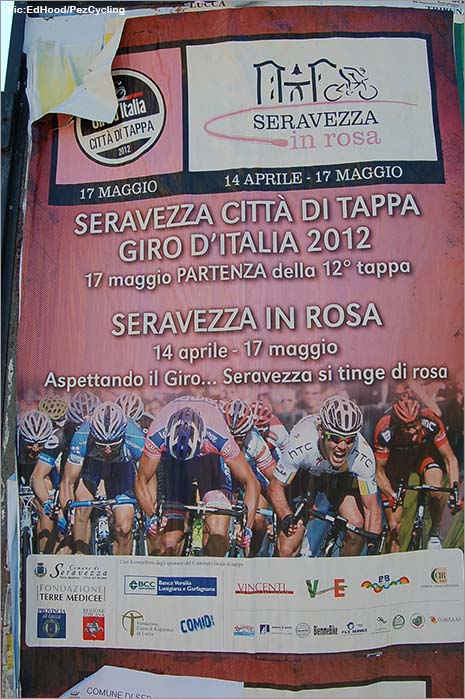 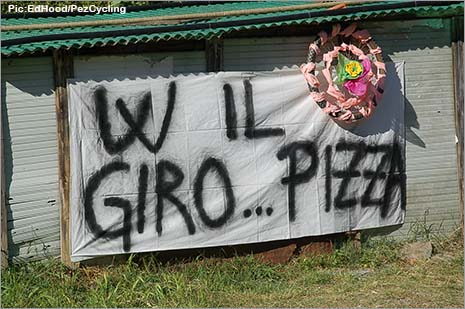 La Spezia, home of Ale Jet – and spectators are out in force.

The first GPM of the day is up out of La Spezia, a nasty 4th cat. which Cav, Goss, Ferrari and Co. ain’t gonna like.

Great views, but no pictures, we’ve let the head of the race get too close and Dave has to do his Lewis Hamilton thing with the Panda to get us ahead of all those flashing lights, flags and police bikes. 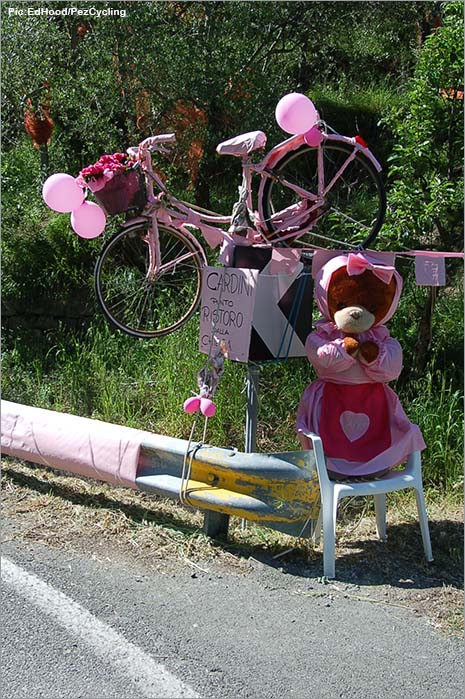 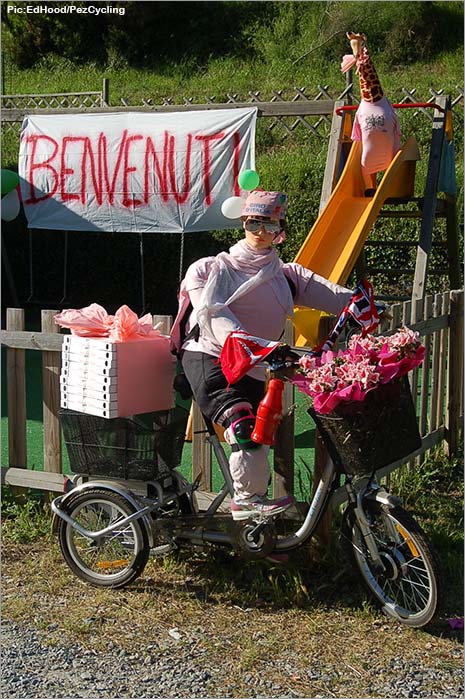 The road plays hide and seek with the sea – heading in to the hills then diving back to the coast.

The second GPM is a 3rd cat – Valico Guaitarola – and not nice. 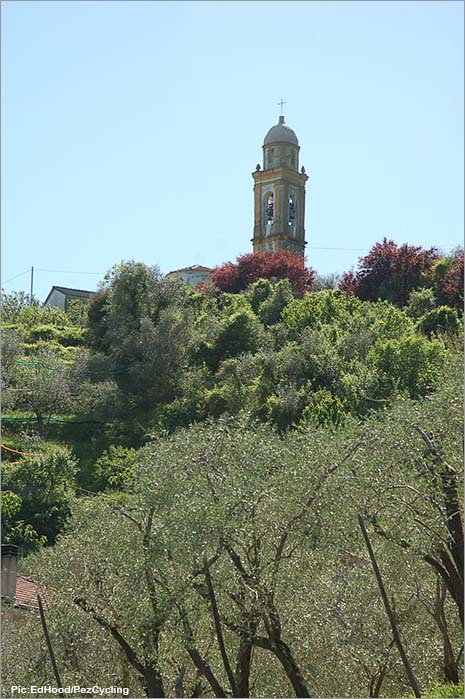 The percorso is sinuous, the climbs hard and the sun hot – not a day to have a ‘jour sans.’

The third climb, Valico La Mola is categorised as the toughest of the day as cat. 2 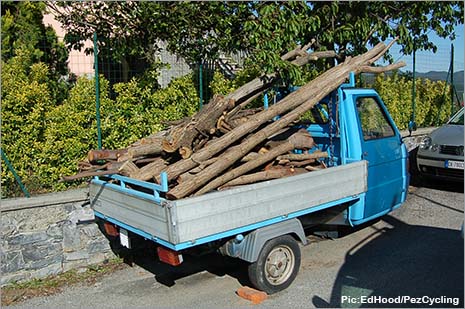 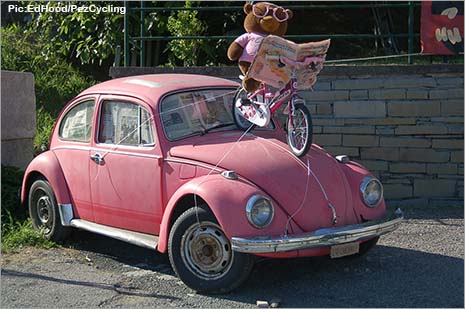 But once again the categorisations have us scratching our head – the third cat seemed tougher to us. 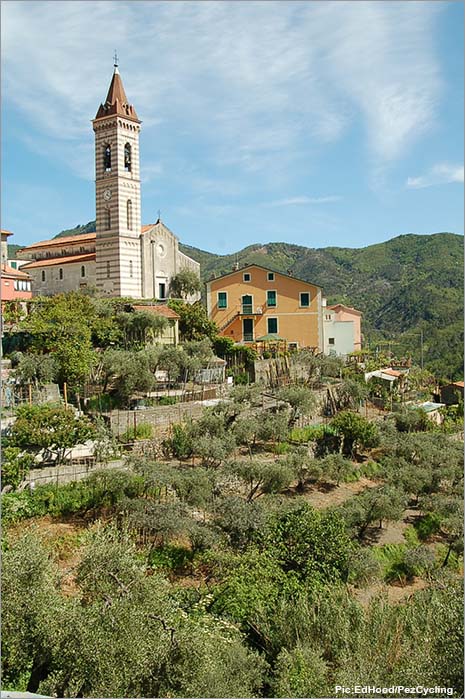 And whilst the final climb of the day is a cat, 4 – it’s brutal. Not that long but steep with hairpins by the score – very hard.

We park over the summit and head back to the 50 metres to go banner.

The sun is high and hot as we await what may well be the first major shuffle of the pack.

‘Otto corridore’ the old gentleman translates for us frm the radio car- a break of eight with Jackson Rodriguez the best known. 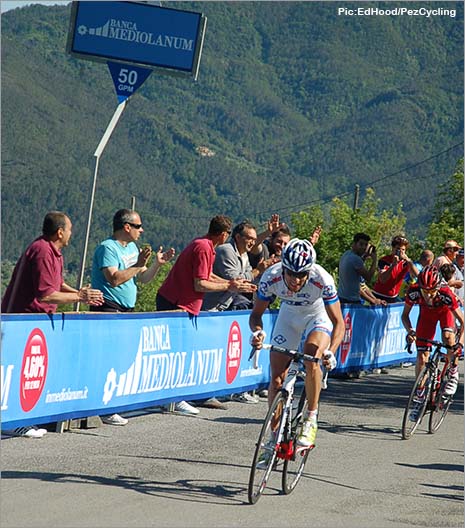 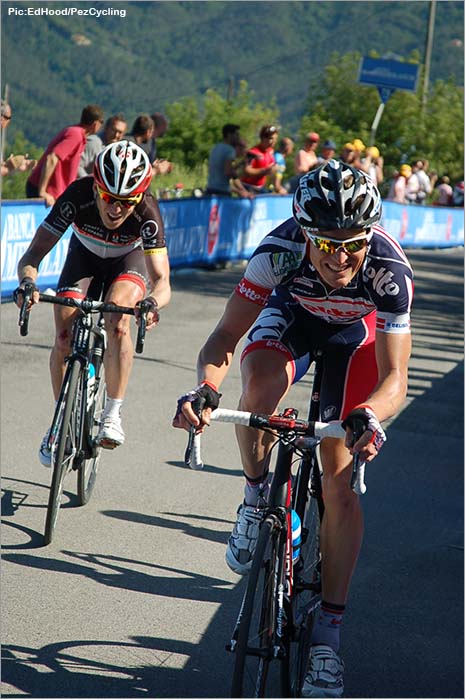 F des J come first over – Casar, then BMC – Santambrogio, a Movistar, a Shack, a Lotto, we think it’s Bak, an Euskaltel, a QuickStep and a Vacansoleil are scattered behind. 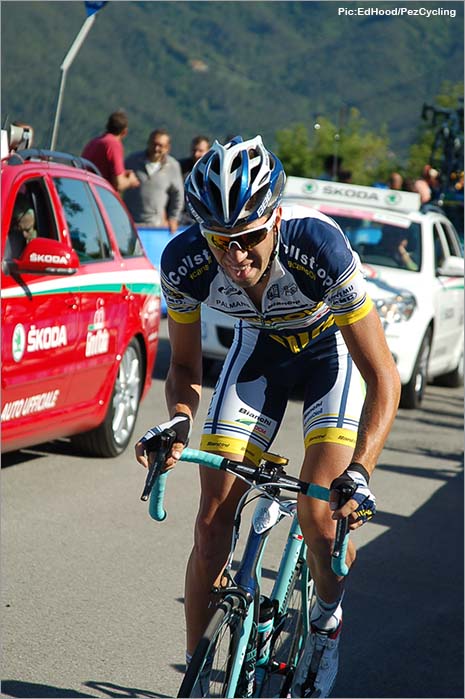 As well as his boss, there’s Scarponi, Rodriguez, Kreuziger, Schleck – Ryder is last in the group, hurting, but he’s ceded no time to the rest.

Sky have two there – Uran and Henao.

There’s a big gap back to the next big group, but there are men all over the mountain. 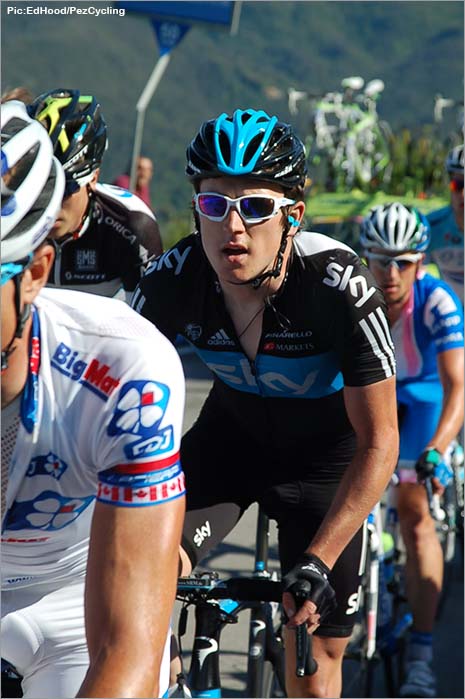 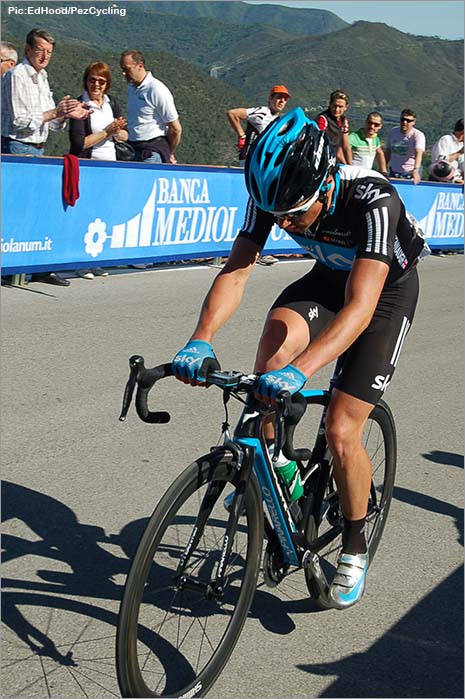 They’ve been working like Trojans for Cav – and have to finish, this is part of their team pursuit preparation for London. 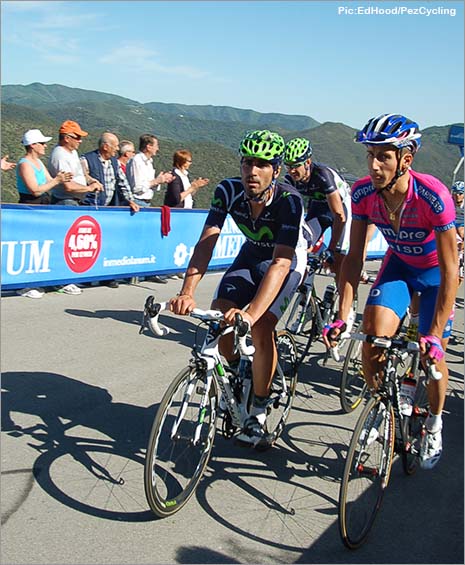 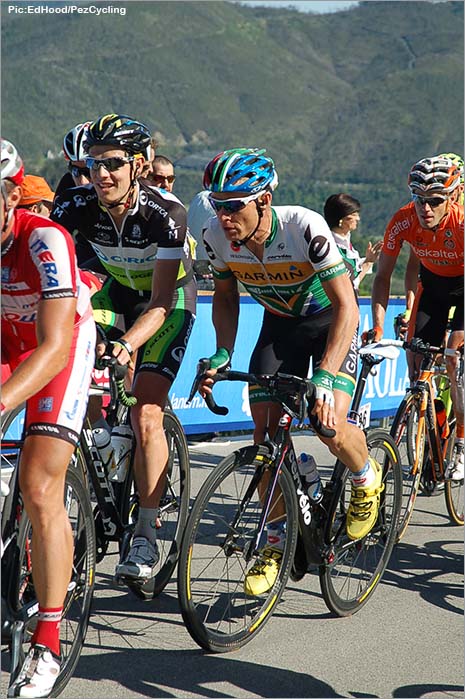 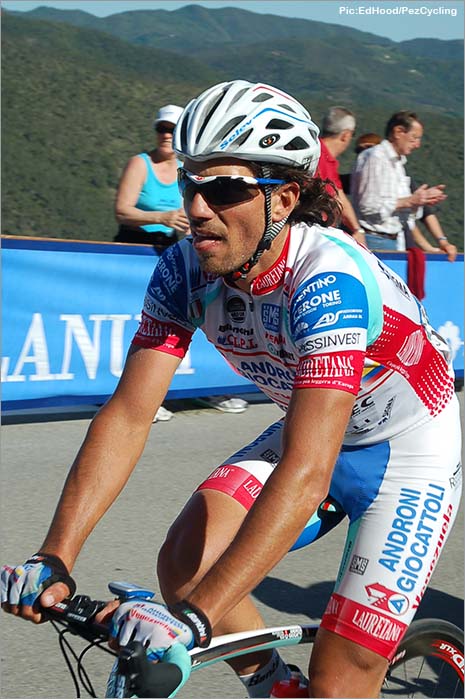 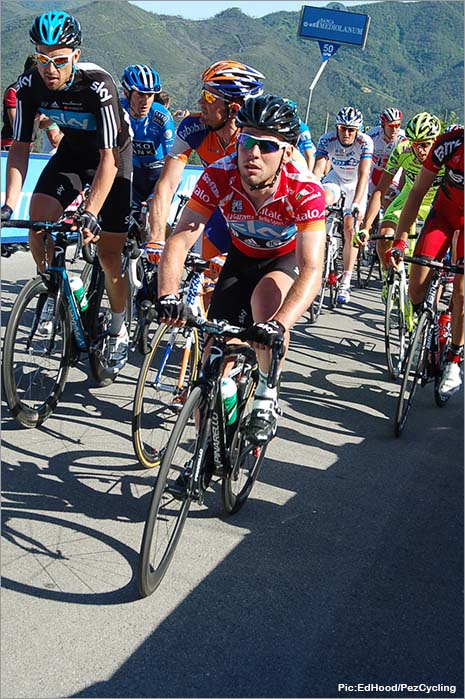 He leads the gruppetto,

The gruppetto passes and the crowd begin to jump the barriers – but the ‘fin corsa’ van hasn’t passed.

There are still riders out there.

The solitary policeman tries to control it – but it’s hopeless against the human tide.

The road is almost clear when we see blue lights – a solitary rider, with the ‘fin corsa’ van behind him. 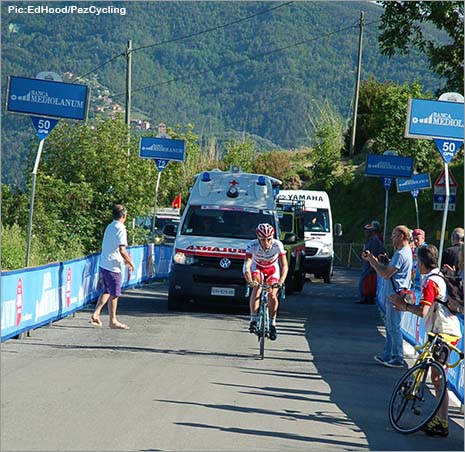 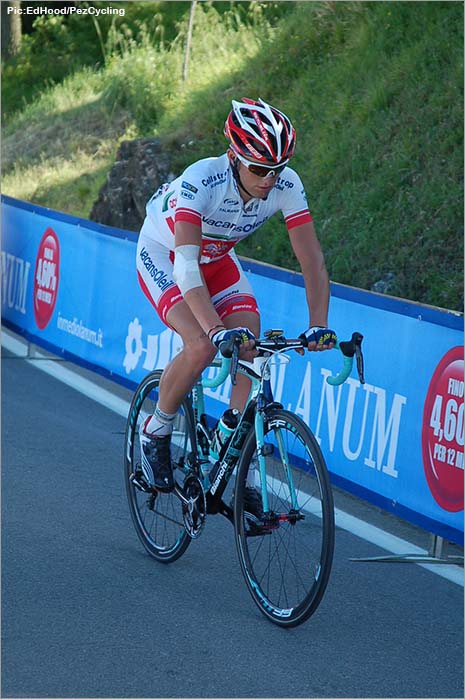 Those of us who are still left clap or cheer – but it looks certain the time cut will claim him.

All the jerseys and flowers will be gone when Marczynski gets home – but for us, he’s our man of the day.