Roadside St.15: It’s not like this is easy. Sure I get to chase the Giro for a few days, Mrs. Pez says ‘have a nice holiday’… and off I go, half-way across the world, luggage lost, fatigue extreme, patience nil… standing in a freezing downpour as the Giro goes past. Then I see something that sets me back on course…

In spite of the glamorous lifestyle I try to portray as leader of this website, the truth is that my European race-chasing sojourns are limited to 1 – 2 a year, so when they come around, they’re a pretty big deal – to me at least. Every single one of my 12 days away from family to chase and report on my favorite Grand Tour is like rare gold – so you can guess my reaction when United left my luggage in Chicago, and even 10 hours after I’d landed in Italy, no one knew where it was.

So, like any – and every Giro experience I’ve had, the plans changed – although this time much sooner than I’d hoped. Instead of driving directly from Milan up to Auronzo di Cadore to join Thomson Tours for a few days on their King of The Mountains tour, I was getting the run around from United’s pre-recorded ‘customer service’ phone line at almost midnight local time – which was about 32 hours later than the last time I’d slept. 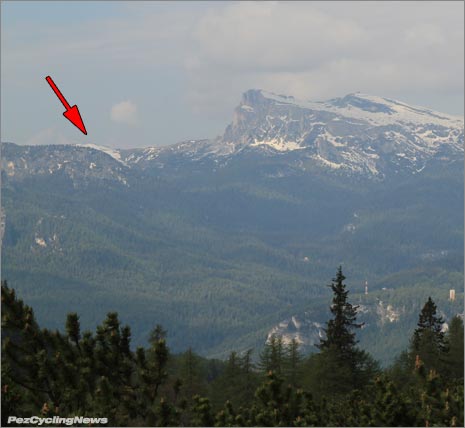 The View to the Giau from the Passo Tre Croce. That red arrows shows where I’m headed.

Tired – ticked – and stressed. On the upside, I did enjoy a fine negroni and bressaola, rucola, and grana pizza to ease me into la vida italiana.

It reminded me of an unavoidable flow to covering these races – that without fail, there will be one or two crappy days that on the surface serve to discourage and depress, but taken in the bigger context, also add a fuller appreciation for the good days that always come.

So about 24 hours after I’d landed, I get a phone call from a lady in Venice who says she has my bags at the airport lost and found. How they got to Venice I’ll never know, but I jumped in the car and bee-lined it from Milan. I arrived at the luggage counter at 5:58PM – only to find they’d closed early (6:00Pm officially). 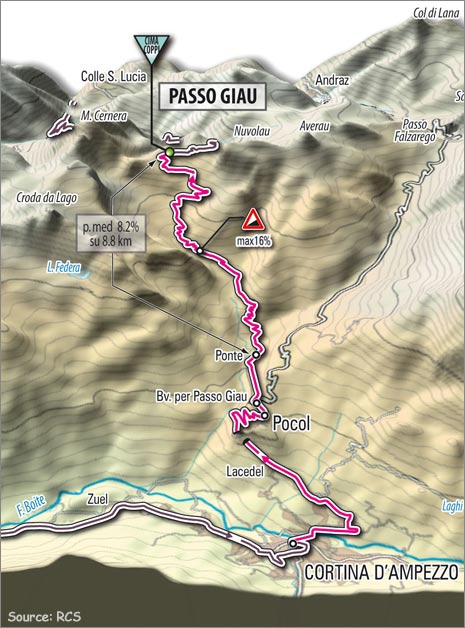 Long story short – I did get my luggage and by 6:40 was enroute for the drive up to meet Thomson Tours in Auronzo di Cadore. I made it in time for dinner, and a negroni… so my turn of luck had a distinct affect on my mood – dog tiredness be damned.

Regardless – it’s great to be back on the race, even if I do feel some pressure from Ed, Ale, and Matt who’ve filed the kind of reports that make me wish I was here. I hope I can do my boys proud – so let’s get this party started.

Saturday AM I was enroute to Cortina, to meet my long time Giro-bud Mino, who’d agreed to drive my car over the Giau, so I could ride it, and then head to the race passage of the uber-steep and even uberer-ugly Passo Fedaia. I met Mino at the Giro in 2005, and almost every year since we’ve met up for a day on the race, and he’ll often drive my car, or we drive the stage together. Good times. 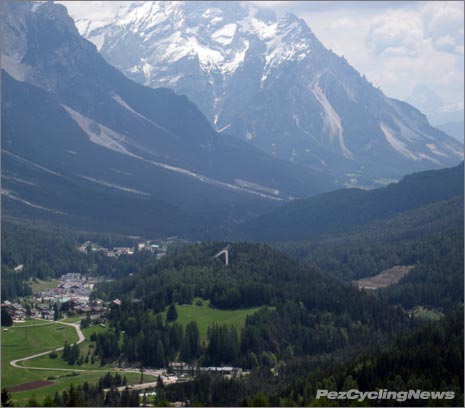 Let’s the say the views of the valley from the Giua’s low slopes speak for themselves.

Not having a lot of fitness in my legs this year, I had no great hopes of setting any records up the Giau, but ever since seeing the route plan in October, I’d wanted to notch it into my list of great Italian climbs I’ve done. I drove it with Mino back in 2007, but was rained out of the ride that day.

So I’d see if Matt’s recent experience with SSFF (Sunburned at the Start, Frozen at the Finish) would hold true. My roll out of Cortina was sunny and hot, and the route was already lined with countless fans pedaling up this year’s highest point to the Cima Coppi. 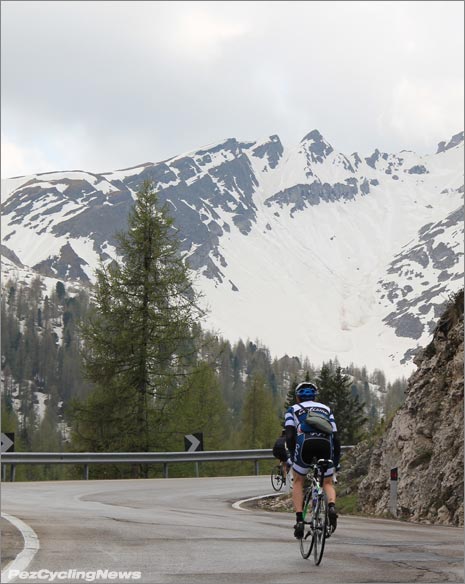 This is a nice climb. Italy is full of ‘em, but I’ll stand up and say this ranks up near the top of my list. The grades are never too hard, but hard enough, and the 15km length will for sure out a sting in the legs. Plus the top at 2236 meters puts you right at the top of the Dolimites – from the summit you look at neighboring peaks in every direction. This really is the top of the world around here.

True to form the weather started to turn about halfway up. The warm sun had been covered by the now habitual afternoon clouds… and as I stopped at the car to pull on a warmer vest – a shower immediately poured forth from yonder heavens. 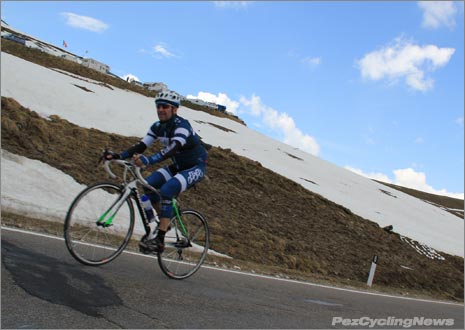 With no one to impress but myself, I happily jumped into the car to let it pass, which was about 5 minutes later. With the roads wet and the wind coming up, the temps had dropped to around 12C degrees, and the second half of the climb took on a new personality. 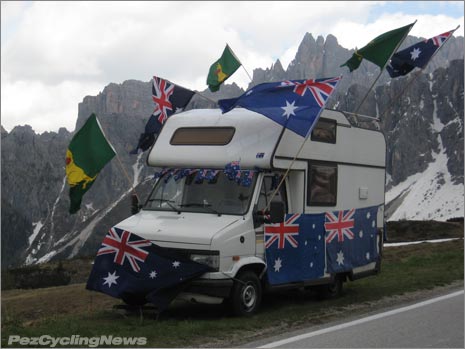 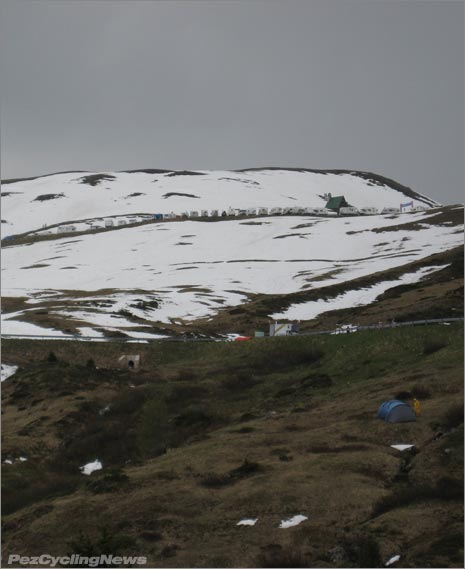 Perseverance usually pays off, and the signs of the snow covered summit, did the trick. With a solidly cold wind bellowing through the saddle that holds the pass, there was little time to waste doddling at the top, although that celebratory shot crossing the Cima Coppi is worth taking for the record books. 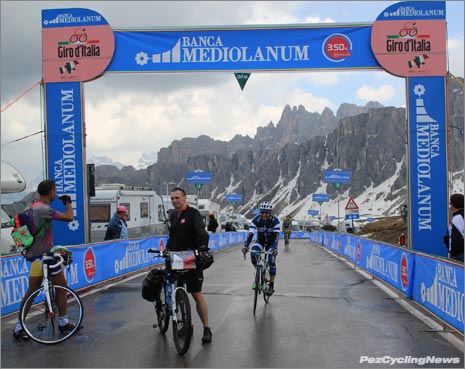 The weather here in May can change daily, hourly, even from one valley to the next. Looking towards the Giau descent I was greeted with shining sun on glisteningly wet roads. Setting aside any hoped for heroics on the drop to the valley, it was more than reward enough to be heading back into sunshine. 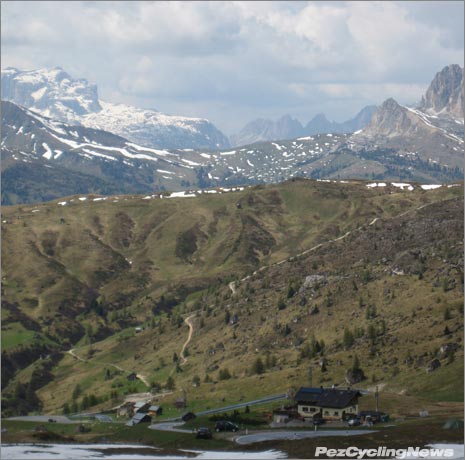 The recent showers had set treacherous conditions on the pavement, and I didn’t envy the boys with the team contracts today. Unless you’re used to these types of descents – long, fast, twisty turny – you’ll soon find that riding is a whole new ball game. And with the tragedy of stage 3 still so fresh, staying conservative was the order of my day.

But that leaves time to actually enjoy the views – which are just plain spectacular around here. 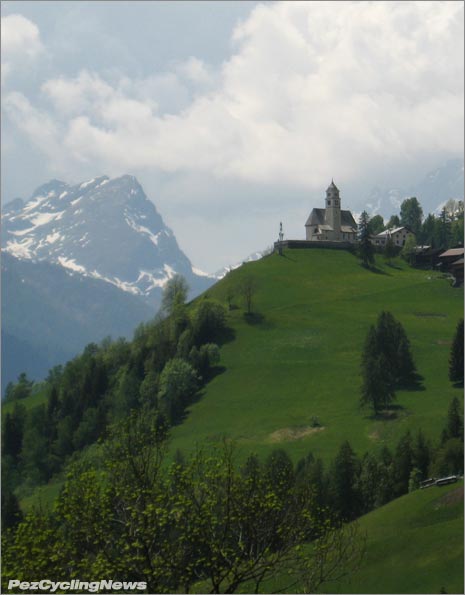 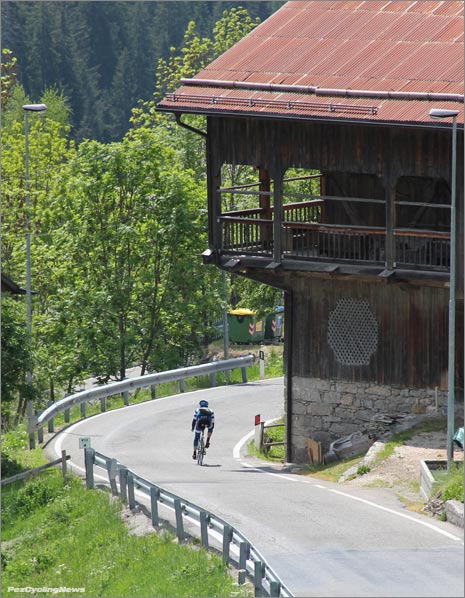 There are two tunnels near the bottom of the valley, and road crews were putting up temporary lighting in the first one when we passed – seemed like a good idea to me since it was pretty long. The second one followed just after, and would remain naturally lit. If you’ve ever ridden through one of these crazy tunnels – you know how damn scary they can be. There’s something about losing sight of your bike into pitch darkness, (even if you can see a dot of light at the end of the tunnel), that throws your balance into a very sketchy zone, and that I’ll never get used to, nor do I want to. 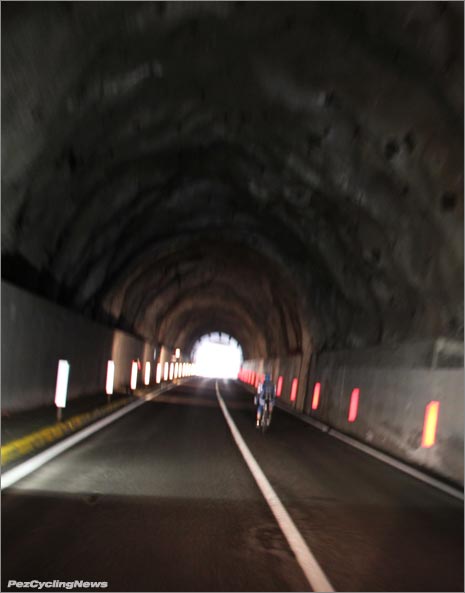 After a good couple of hours on the bike, Mino and I decided pizza was the best call, so the bike was stowed and lunch was ordered. Our day on the Fedaia would be taken as foot fans, and I lost no tears knowing I’d not be riding its horrible slopes.

This climb is long, and just so steep, that the switchbacks at the top are sort of a sign post of relief, since they signal a shallowing of the grade from the 14% full frontal assault that makes up so much of the lower slopes. I reported in this climb last in 2006, and I see little need to repeat it. 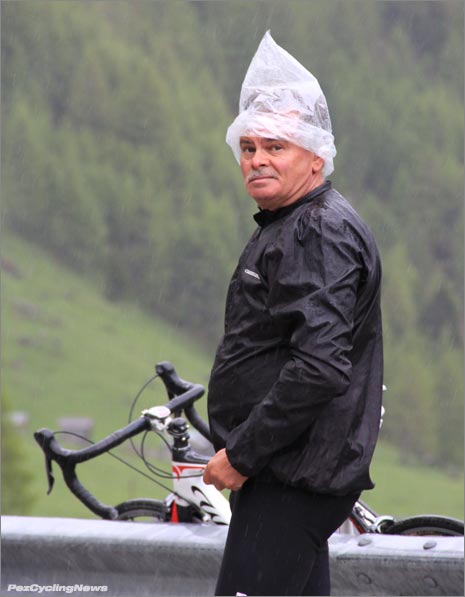 To make matters worse, the clouds closed in and literally minutes before the race arrived, the cracking thunder signaled a butt-ugliness no person should endure. The ensuing rain and cold would turn this day truly inhuman.

The race was broken to pieces, with every man for himself as riders struggled through in ones & twos. Rivalries were put aside as any fellow rider was better company than facing this stuff alone. After the gc men, the faces revealed looks you wouldn’t wish on your worst enemy, and the ‘glamour’ of professional cycling was replaced with eyes that said “take this job and shove it.” 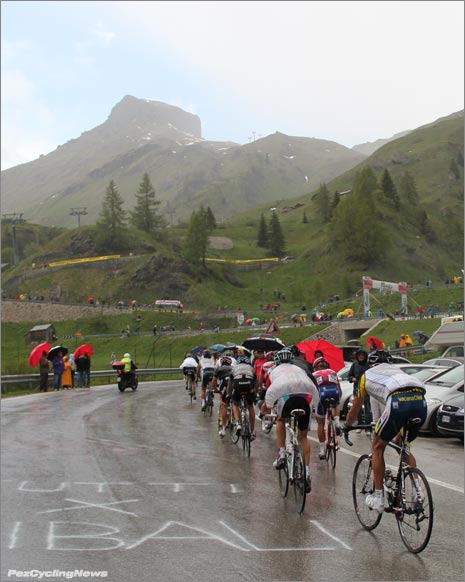 Amid the human destruction we watched parade slowly by were two things that – amazingly – laughed in the face of the pain. 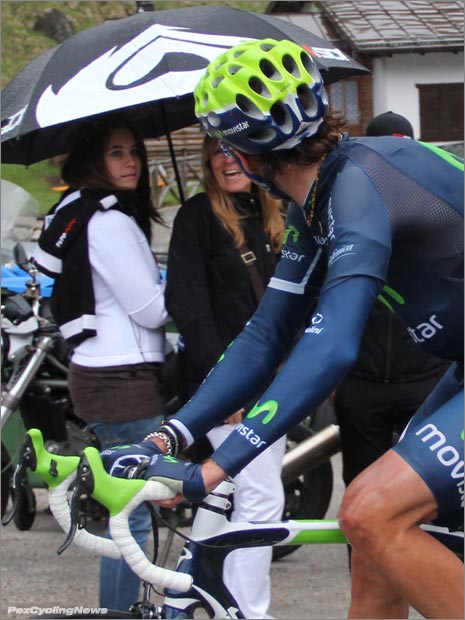 This Spanish rider noticed two girls watching from under an umbrella and exchanged what appeared to be an unexpected offer to meet up later. The chuckles of those within earshot reminded everyone how much bigger life is than cycling. “Of course the Spanish guy would say that…” commented the Italians next to me.

And while the gruppetto came by in dribs and drabs, fans pushing riders up the slopes was almost game-like – everyone was taking a turn. You couldn’t blame the riders – this climb was just too cruel. And only when I edited my photos did I notice long time Pez pal Dario Cioni helping one of his teammates up this 14% stretch – . 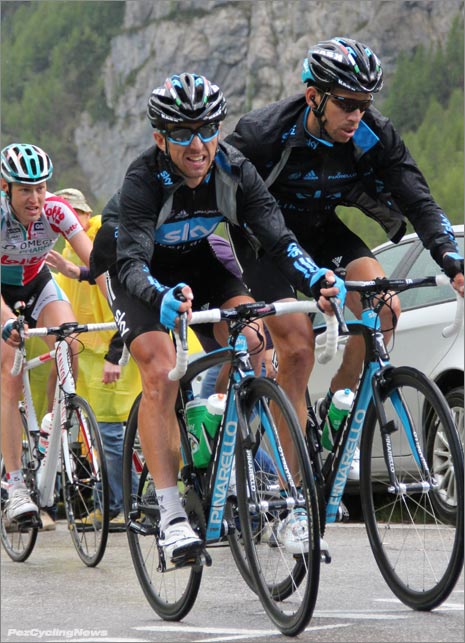 Given my rough start to this trip, sometimes it just takes a look at someone else’s day to add some much needed perspective. I’d say things for me have definitely turned around.

That’s all for now – ciao a domani –
Pez

Travel: Meet France From Inside Tours