Roadside St.18: Going to the Giro is fun, but come on, it would suck if you didn’t meet anyone. Today was one of those days that make life great – all because I met up with some old friends, and made some new ones – thanks again to the bike.

The big challenge chasing the Grand Tours is running out of time to do everything – concoct a plan for the day’s roadside viewing, get to the stage, get in a ride, …oh and see the race. Then get enough rest to go all day from 7am till midnight or later. Yesterday’s cross country drive from Belluno to Bergamo put paid to any roadside action, but I made up for it with today’s ride over the Passo Ganda. 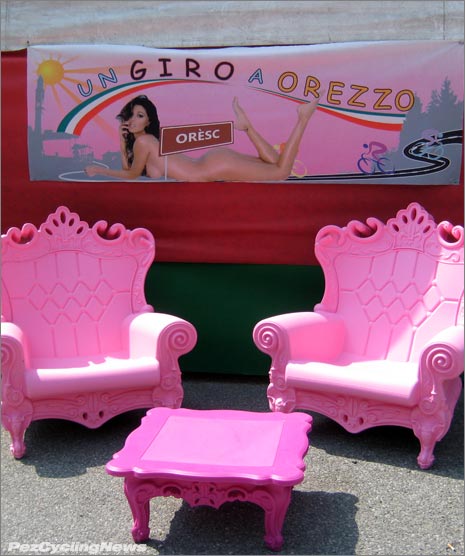 Pull up a chair and make yourself comfortable – today’s story is a good one. 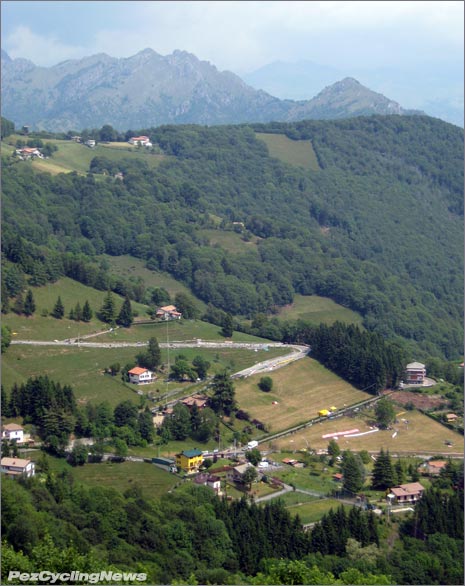 The Passo Ganda revealed itself as a beautiful climb worth doing again.

It never fails, there comes a time during my own race reporting that I’m so far behind trying to get everything done, that I have to take a few hours or even a day to get caught up. For some reason – those emails just never stop pouring in – so yesterday I took the AM to log back in and clear the inbox. 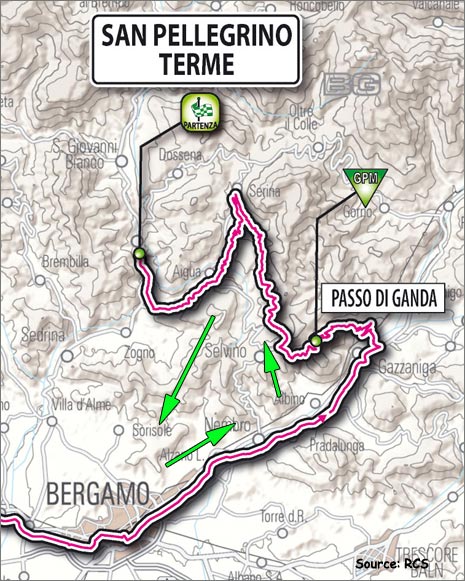 A nice little 3.5 hour ride today from Bergamo, up the Passo Ganda, down the Selvino – and back home.

My sense of hope that I might sneak in an afternoon ride in Bergamo turned to disappointment as I drove head-long into one of the blackest storm clouds I’ve seen – and slowed the car from 160kph down to 80, set the wipers on full, and started entertaining thoughts of a Plan B like a desperately needed nap to try and snap me out of my continuing jet lagged haze.

The gods of the Giro must want to keep me on my toes, though, as the storm passed, and at 5:30 I was heading out for a short spin around this terrific northern city, with long time PEZ-Pal Gary Vasconi of Capo clothing. We see each other about once a year at Interbike – and usually make the well-worth-it effort to have a dinner – which started as a celebration of our long time partnership when Gary and his partner Rob Carbone agreed to supply the official PezCycling News team kit way back in 2004. After a bunch of successful years – Capo has earned its way into the top tier of technical cycling clothing brands, and are now expanding into the UK and Italy (which is where most of their gear is made in the first place).

Gary has been here in Italy interviewing dealers, and by an amazing stroke of good fortune, we actually pulled off a good (but short) ride, followed by the mandatory cocktails and dinner. That was fun. My 1:00AM lights out…not so much. But some things are worth staying up for. 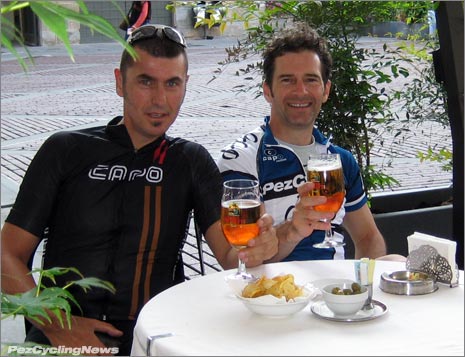 Toasting a bunch of successful years, and good friendship in Bergamo’s Citta Alta with Gary Vasconi of Capo Clothing.

This morning, 7:00AM came way too soon, so it was 8:00 when I hauled the ol’ carcass outta the sack. But the sun was shining and I was enroute by 9:30 looking forward to whatever adventure awaited. 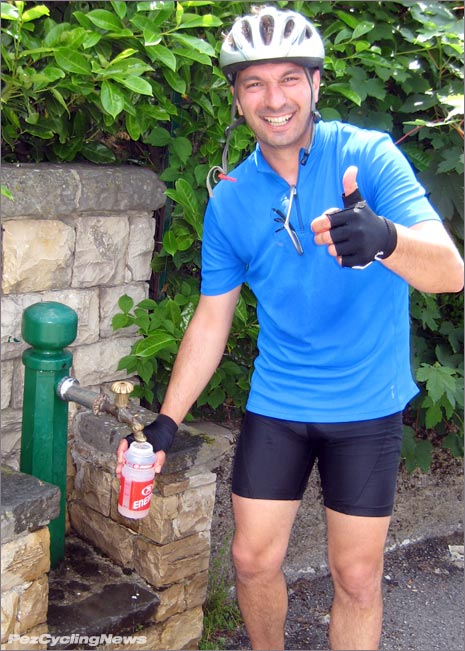 About 10 minutes into the ride, and already lost (okay sort of – I just had not found the corsa yet) – I pulled up alongside another rider. I asked if he knew the way to Passo Ganda, and since he was heading there himself, we joined up and were off. Wagner (say Vahg-ner), took the day off from his job in Milano to come see the race, which would be passing through Bergamo about 3:00 enroute to the 1043 meter Passo Ganda as the day’s obstacle before the finish in bottled water town of San Pellegrino 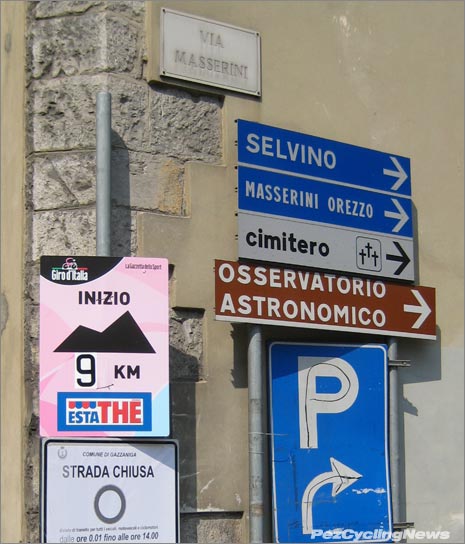 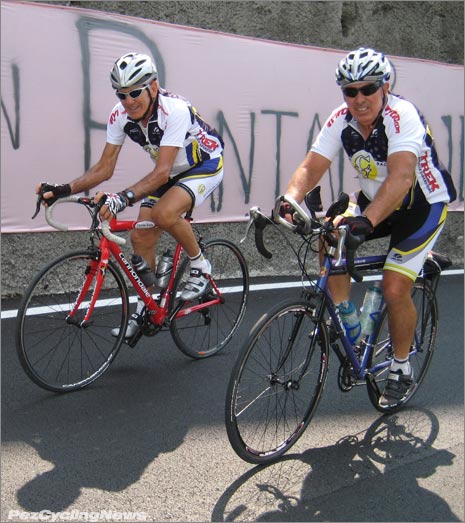 Not long after that we pulled up behind a couple more guys – looking strangely familiar. A quick ‘ciao’ turned into a “hey I know you”…

Darrell Oge and I met at my week with Cycling Camps San Diego back in February. He’s been riding his bike around Italy the past few weeks and met up with his Italian friend Vincenzo for a few days at the Giro. But the story gets better, since I originally did not recognize Darrell, but I recognized his kit because I’d seen a story about them both in this morning’s local paper here in Bergamo. 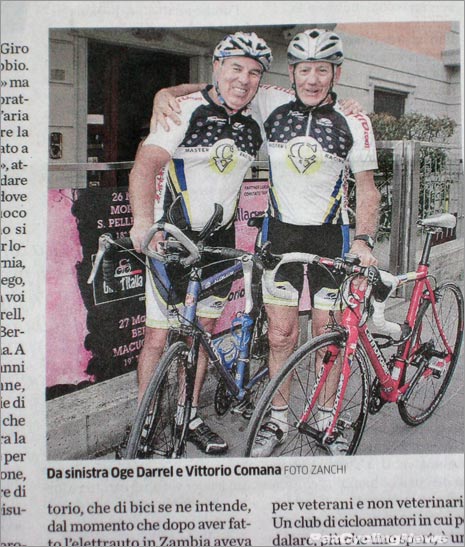 Darrell & Vincenzo made it into the local paper.

Vincenzo is actually from Bergamo, but left after World War II to one of Britain’s African colonies, where he met his wife who’d moved down there about the same time from Florence. After making a family and life for himself there, he followed his sons to California when they went off to college, and he now makes his home in San Diego. 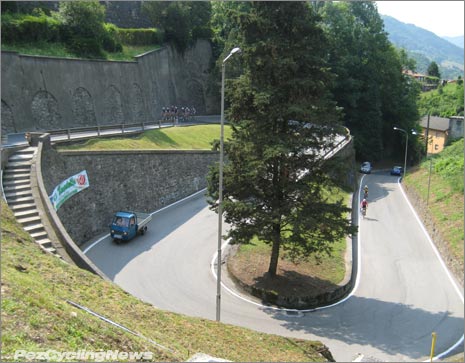 Small world stories out of the way, we got onto the job of knocking out this climb, which gains about 600m over 9.2km. The grade runs in the 5-6% range for about 6km then starts getting steep towards the top with a pitch at 14%.

This is a great climb – lots of switchbacks haul you higher up the side of the valley, and each one offers a better view to the north and south as you wind your way up.

The grades were a pleasant change after a couple of days in the much steeper and longer Dolomites. This is the kind of climb I’d love to live near – not too long, not too steep… juuuuuust right. 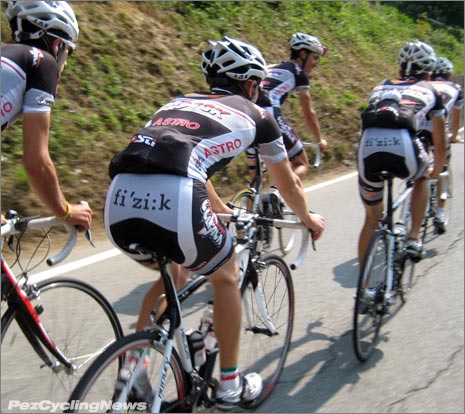 The climb was full of riders and fans making their way up to catch the race.

I settled in to a nice slow climb, then dialed it back. Not knowing when I’d pass this way again, I wanted to soak in as much of the ride, the views, and the atmosphere as I could. 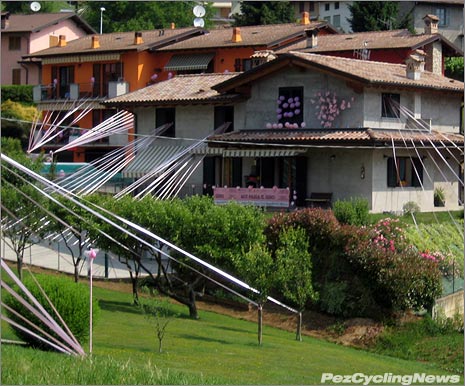 This region around Bergamo is mad for cycling, and it was clear by the number of decorated homes and banners we passed. 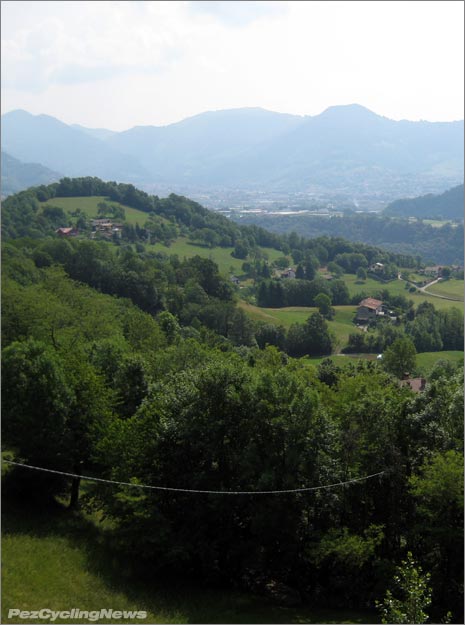 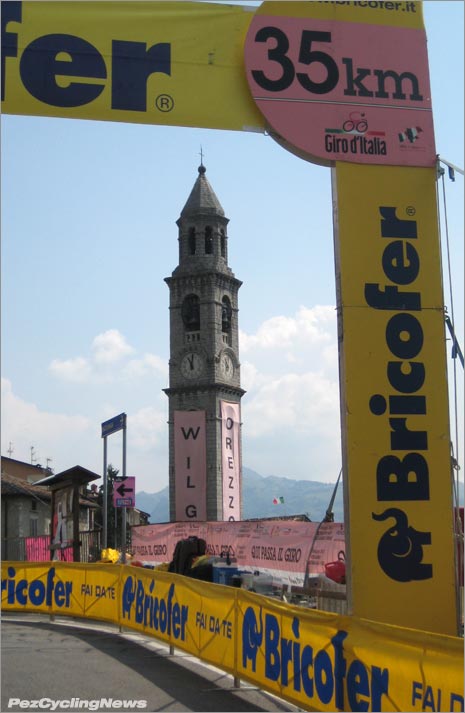 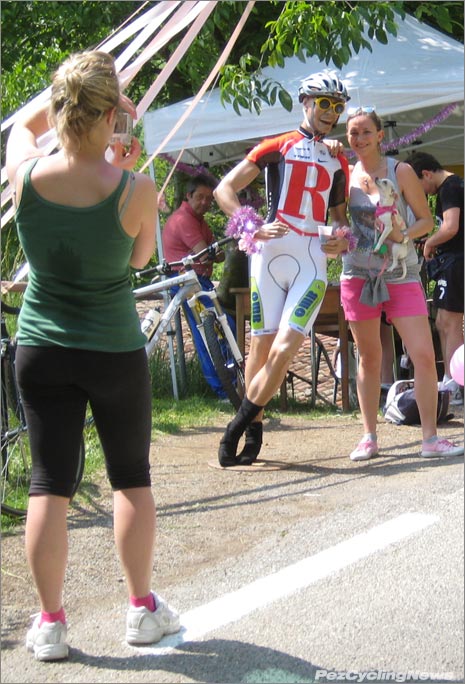 There was a big stretch of road dedicated to Yaroslav Popovych, including this opp to pose with a remote likeness of him.

The top of the climb was a welcome sight, and although the corsa hung a sharp right to begin the descent, another road carried on to a tiny village of Ama, which overlooks the Val Seriana. I rolled into its tiny piazza (which was only about the size of a large driveway), only to be confronted by one of my favorite smells in Italy – the roasting barbeque. 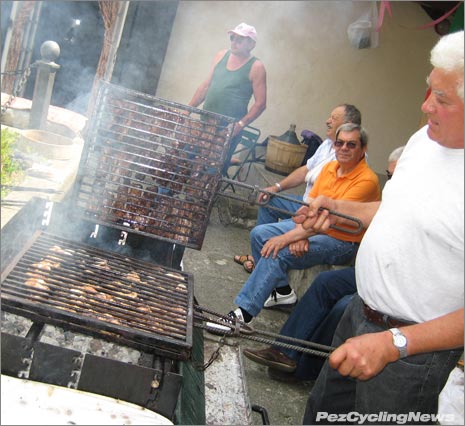 Smoke billowing from behind some parked cars called for immediate investigation, whereupon I discovered the man in charge looking very in control of the grill, while a bunch of his buddies offered moral support via sitting in lawn chairs.

I requested a photo, and a young guy (named Dario) started speaking English, so I asked if they had a view of the valley that I could photogragh. “Of course, come on in” he said and disappeared into the house. 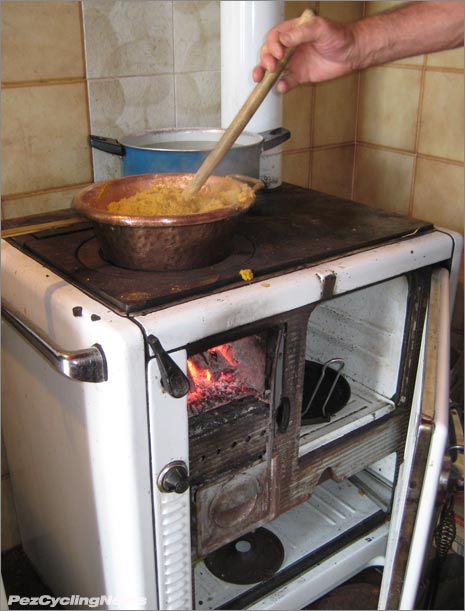 We walked through the tiny kitchen (I’ve seen bigger closets), and we squished past another team of 3 – his mother, aunt and uncle I guessed – preparing more food. Uncle was stirring a big pot of polenta – a very popular dish in this region – which he was cooking over a special wood burning stove – the photo above explains this appliance better than any words I can muster…

Before I know it I’m being handed a glass of their homemade wine, and some freshly cooked bits of lightly battered and fried in olive oil zucchini – delicious. Unfortunately I was on the clock and still had many kms to go, so took my leave and bid this fine family arrivaderci. 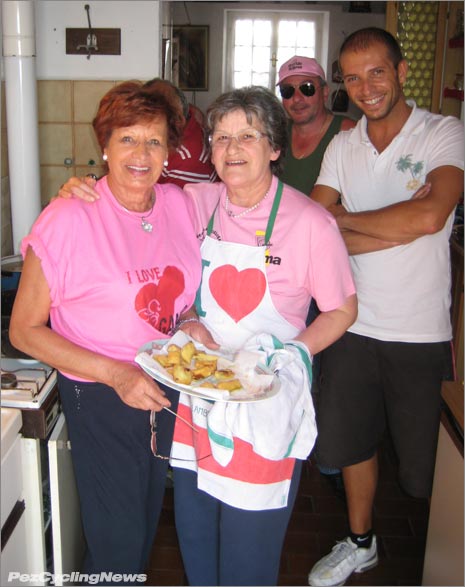 Dario’s mother asked if I’d take her picture, and I was happy to oblige.

Another day for the PEZ Hall of Fame….