Giro di PEZ: From The Balcony

Roadside St.10: An afternoon to the Giro. I always wondered how it could be if the Giro was passing just in front of my house. So this is the story how I managed, with the help of Clara, to make it happen.

The stage 10, coming after the rest day, it’s a sort of another rest day for the riders. Flat, quiet stage from Termoli to Teramo, on the Adriatic coast of Italy, heading to north. The weather is uncertain and there’s quite a wind blowing transversal from the sea. It doesn’t seem like May; the sea is grey as it happens during the early spring days. It’s one of the stages I like, one of the stages making the Giro. 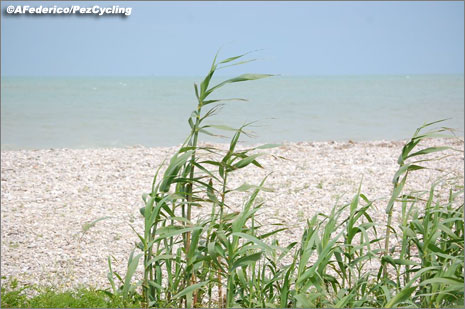 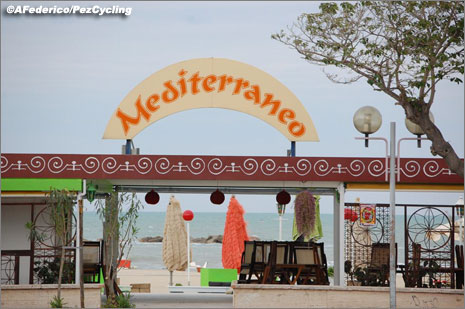 Not a day for a swim, but Roseto is preparing for summer.

Some of you will probably think that a stage of this kind is just a day lost, with the bunch rolling boring to the last 20 km to prepare a crazy final. But the Giro is not just the Zoncolan or Finestre and, even if thousands of people will move to the Alps in the next days, the magic of the Giro is going through the every day roads. The magic of this sport is to come inside people’s houses invading the roads, stopping the traffic and allowing seconds of dream to the people. Anybody during those seconds forgets the daily pains and opens the heart. 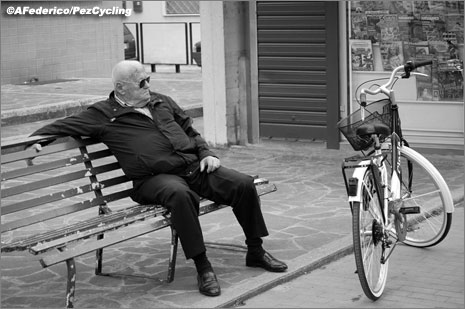 Waiting for the Giro. 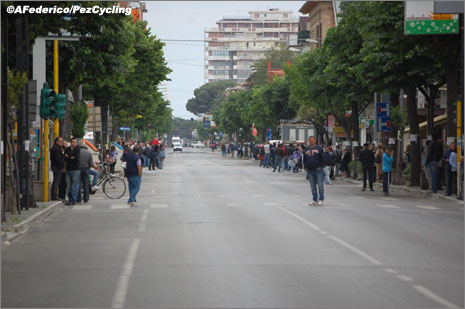 The road is empty, the people wait.

When I was a young guy, I was always wondering if in my life I could have the luck to see the Giro from my window. A silly thought, but for a person who travels thousands of kilometres a year to chase cycling, this thought was becoming more and more important year after year. When I moved into a house having a private road access I just thought the dream was over. 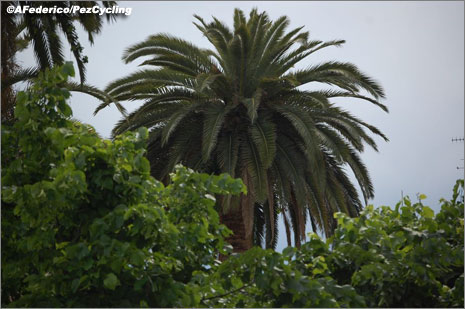 Today the road took me to a town called Roseto degli Abruzzi. It’s a town of 25.000, in Abruzzo, south Italy. It’s a summer-town, one of those places doubling its citizens during the month of August. Now, out of the season, it’s quiet and calm. A long road with trees and few people on the way waiting the Giro passage. I stopped here because my train was doing so when I was in the navy, going down to Termoli. It was a long trip from Genova to Termoli, almost a day, but when the train was stopping in Roseto I was coming in the last hour. Places and people sometimes cause mix and this is that kind of situation. Sometimes you take choices with strange criteria, and this was for sure the case. 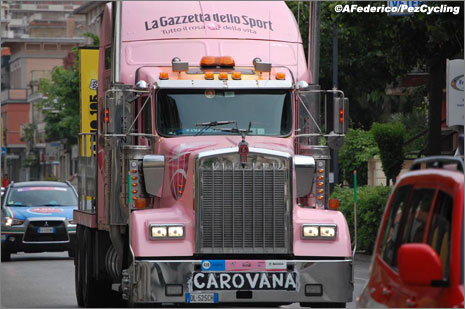 So, this is how I arrived here. Walking down into the road it was quite clear it wasn’t a day for pictures. A straight, large road, high speed of the bunch. No chance to make something special. That was the thought when I had the idea. 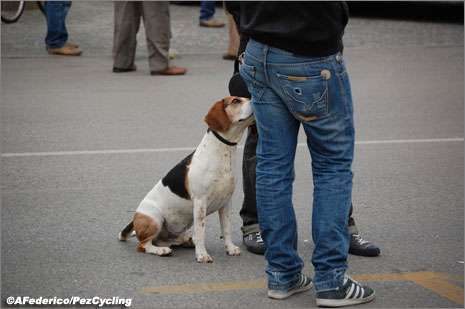 Everybody wants to know the news of the race.

Make the dream possible! Looking to a balcony, I saw some people waiting for the incoming race. The position is perfect, just above the road where, in a couple of minutes, the Giro will pass. Having the Giro just below the balcony, it’s just a matter to be over there. In these cases, it depends a lot how the people react: I’m ready to be laughed at to my face but, well, in the right case the effort will be paid back in total. 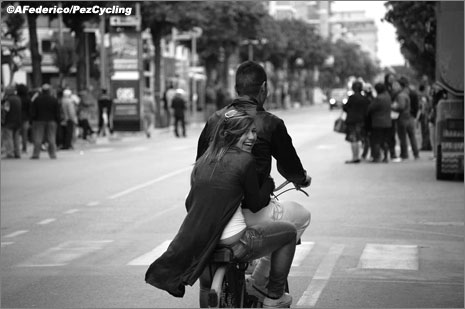 The most difficult action is to find the right family name on the intercom – “Madam, I’m a Giro photographer, I would like to make a shot from your balcony” – in any other cases they could call the police but, the Giro is the Giro and Clara, the owner, opened her house to me. I just told a little lie, I’m not really a photographer, but it would be hard to explain how PEZ crew interprets the journalist job. 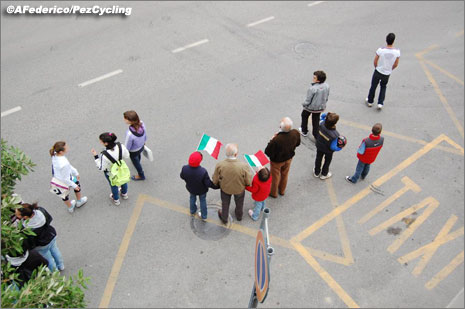 I’m on. It’s my moment. The Giro is coming just below the balcony. There are three people ahead with a couple of minutes on the bunch, but today it’s not so important how the race will develop. 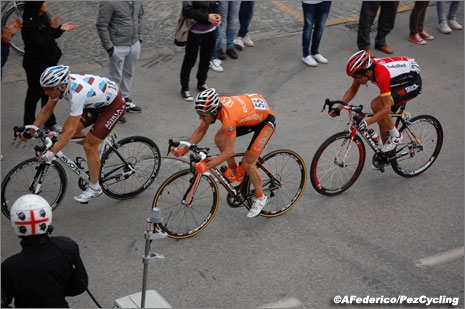 Today it’s important to be here, in the real Giro. The Giro of the people and of the every day roads. There will be time for the high mountains and for the terrible climbs. Today the normality is the magic word. The people down below are screaming, and the bunch is already coming. 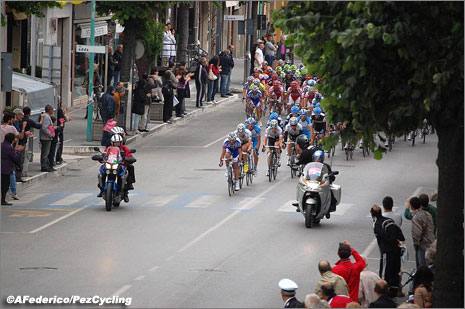 A very fast passage, just the second to identify the “maglia rosa” and to make a picture of him. The race is over. Clara and her friends Annamaria and Mario want to know where they will find the picture from their balcony and it’s the moment for them to meet the PezCycling world. 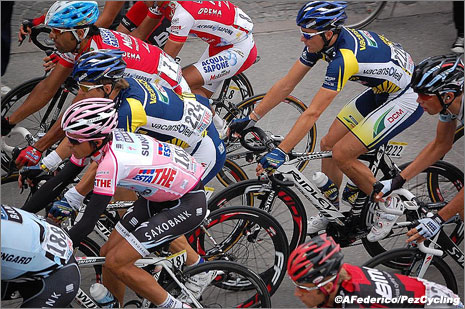 Leaving the home Mario has the last word – “See you next year!”. A few minutes ago we were strangers and now we plan for a new event. That’s the magic. That’s the Giro. 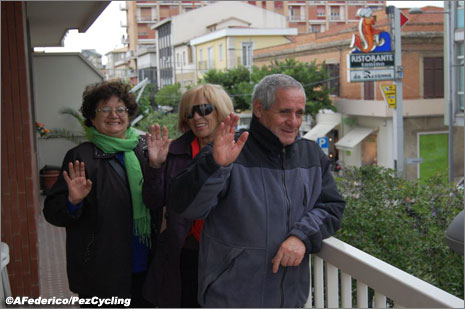 Thanks to Clara and her good friends. See you next year!

Tomorrow, I will make a short ride on the hills surrounding Castelfidardo in the Marche region. The Loreto Sanctuary, will watch the green hills all the night, waiting for the Giro. Follow me!

Toolbox: Living With the Risk of Crashing