Roadside St.16 In the parking lot outside my car window, a family is enjoying some wine and sausages out of the hatchback while the rest of us sit parked on the road. They’ve got the right idea – they’re still enjoying the day. And even though the rain is falling again in drops, it’s been a hot one – reports of up to 30C degrees at the start, and very humid. And while things got off to a slow start – they picked up speed and finished once again with a bang. 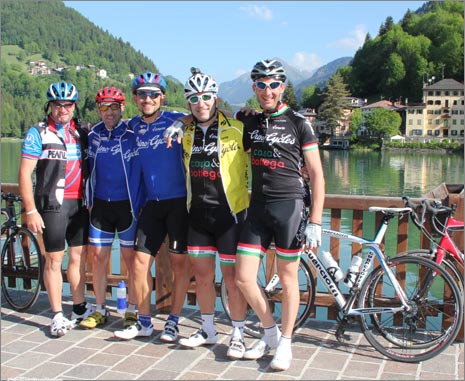 I said goodbye to some new friends after a couple of excellent days with Thomson Tours, including these five guys who are all Italian – but of the Australian persuasion – we had some good laughs making fun of all the things we love about this country.

After an early start driving from Alleghe down to Belluno for today’s Time trial, I was hoping for a somewhat reasonably paced day. But… it’s now after 6:00 and we’re stuck in a not-moving line of cars trying to exit Nevegal. So with a good 2-3 hours of work ahead, I best crack open the laptop and get at ‘er. 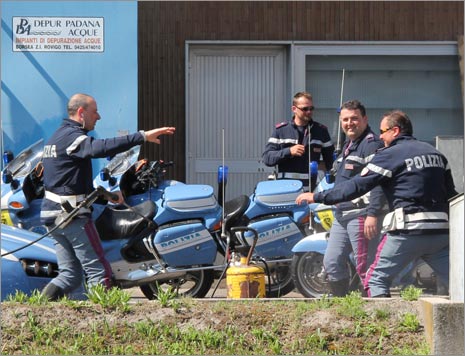 My guess is that one of the funnest jobs in Italy would be in the moto division of the police force. There was a whole crew of these guys washing their cars and bikes ahead of today’s stage ( – looking good is a national pass time here) and these guys decided a quick water fight was in order. 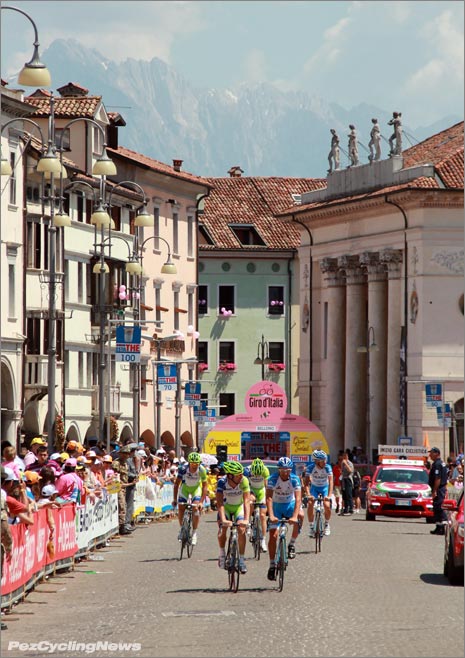 The main square in Belluno was already cooking by 11:30 – signs of a good day ahead.

Like most of our days on the Giro, the plan we start with usually nary resembles the final product of what we write. So some days it’s easier to resign yourself to the fickle hands of fate and let the day write itself, and just enjoy the ride. 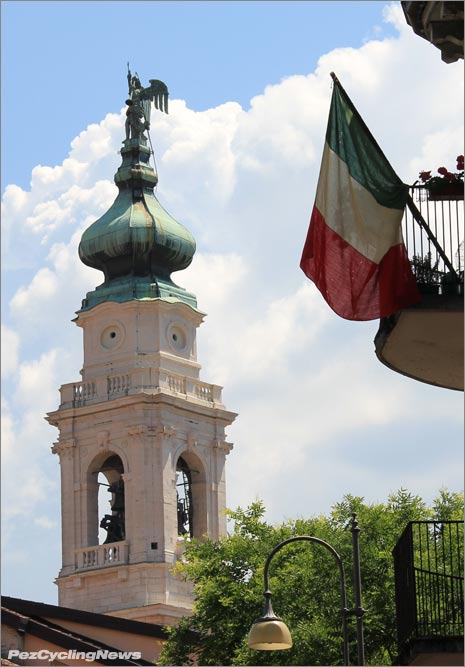 Belluno is a pretty little town nestled at the foot of the Dolomites – towering peaks to the north east and west, and the summit of the mountain time trial at Nevegal some 13km to the east.

Wondering what the day’s story might look like, I aimed for the villagio di partenza, usually rife with fans, freebies, and daily distractions. Maybe it was the heat of a hotter than normal day, but the baking town centre was more conducive to dozing hostesses, and those that weren’t sleepy seemed occupied with either texting, smoking, or both. 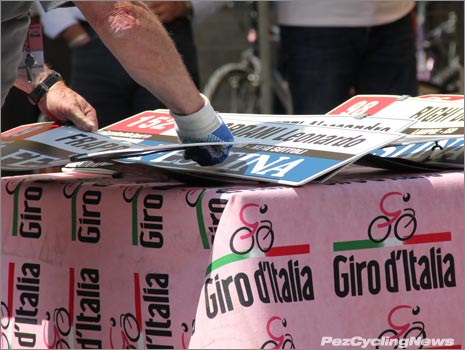 A quick call to my pal Mino and the day got back on track as we decided to follow one of the riders on his run to the top. It really does rock having a local man to handle the required ‘negotiations’.

Around about 2:00PM we were in line by the start house, wondering who we’d get in the draw to chase a ride. 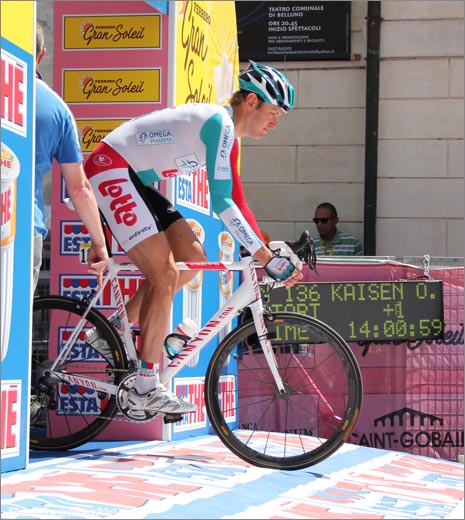 #136 – Lotto’s Olivier Kaisen of Belgium. Just as he rolled into the starthouse, one of the officials stuck his head in our window to remind me that my credentials did not allow for photos during the race.

“Okay, maybe just a few, but not too many…” he said as Kaisen rolled down the ramp. 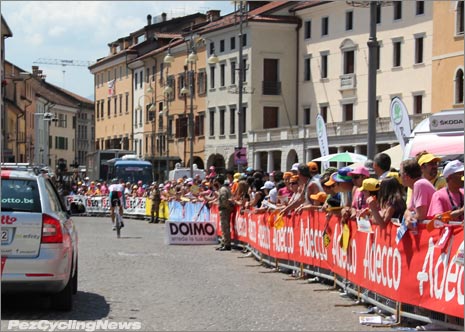 Maybe they were waiting for the race to get underway, or maybe finally waking from a warm morning’s slumber, but as soon as we hit the course the fans started to come alive, and the further we went the more this turned into the place to be. 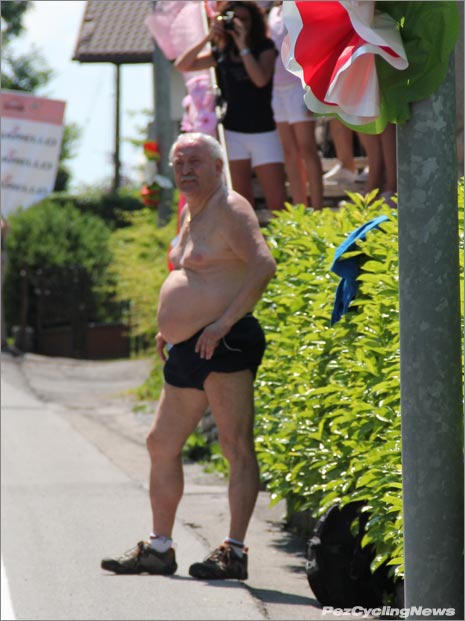 Sitting 32 places from the end, our money wasn’t exactly on witnessing a blistering time being set on the corsa. But the higher we climbed, the more wild the fan cheers, and whether it had any effect on Olivier or not, it sure made our chase up the climb a lot more fun. 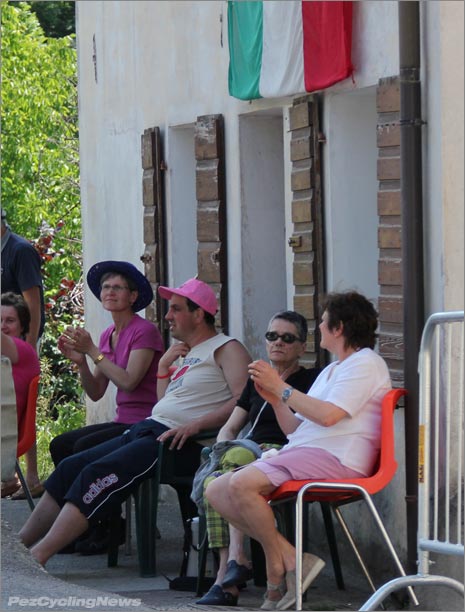 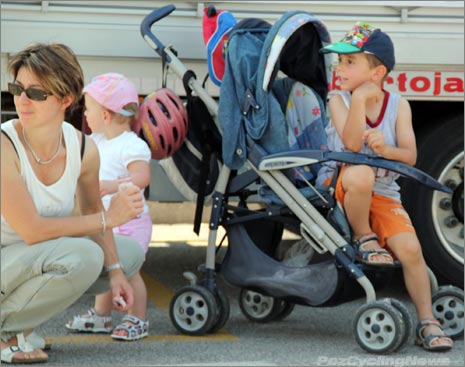 Our climb would last a bit more than 30 minutes, 33:30 officially, but the stuff we saw will (for better and for worse) register for much longer… 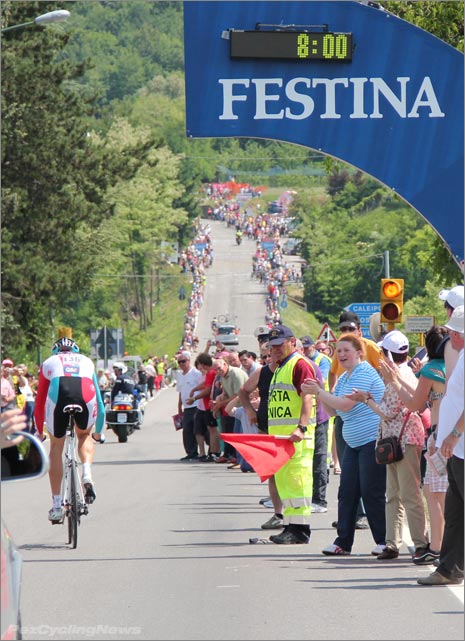 Passing the fans flashed by in more clips than a Lady Gaga video, but each one stood out for some reason or other. There’s little I can say about the parade of tifosi rolling by outside my window, so in this case it’s best to let the lens do the talking. Of the hundreds of shots from today, here are the 21 that best define the day. 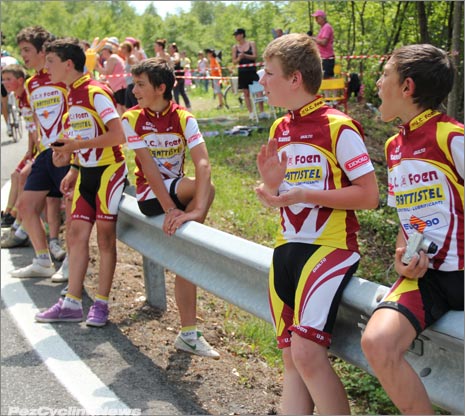 Here’s something you don’t see at home – a whole squadra of kids. 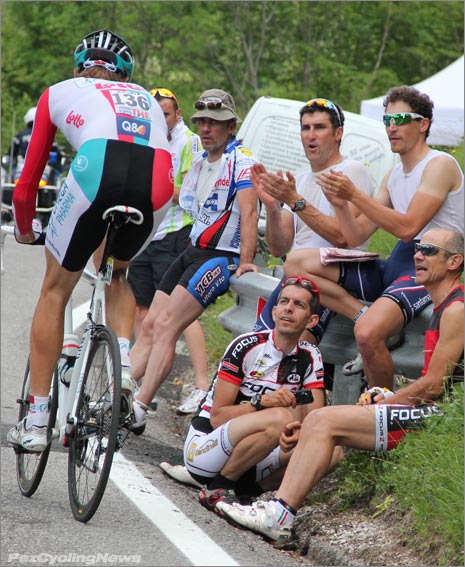 Kaisen ground out the climb. The middle section got pretty steep hitting 14% at one point, but with over 4km above 10%. 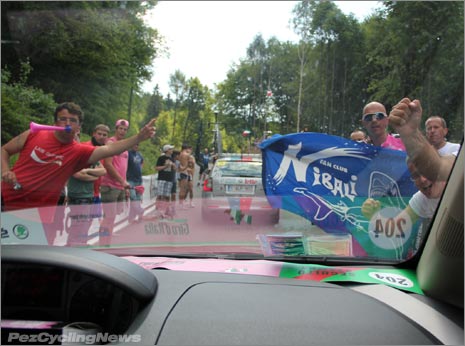 I was reminded of a Belgian day – since the higher we went the more rambunctious and beer soaked were the fans. These Nibali supporters looked like they were going to smash our car in their frenzied jubilation – and Nibali wasn’t due to start for another couple of hours. 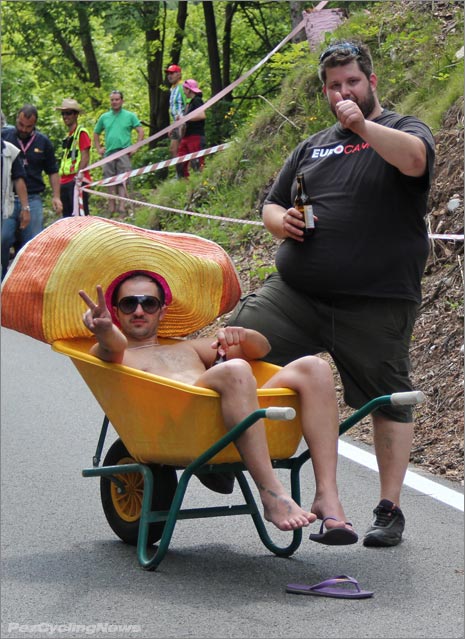 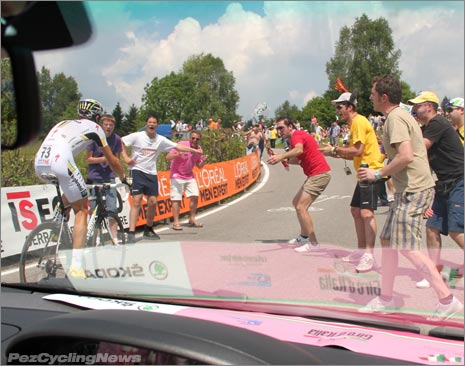 Just as the climb started, our rear view caught a glimpse of HTC’s Patrick Gretsch already closing. It took a while, but pretty soon he was coming up – not fast, but there’d be no stopping him either. His progress slowed in the steep section – a testament to just how tired these guys are after the toughest Giro corsa in years. And then he was by. 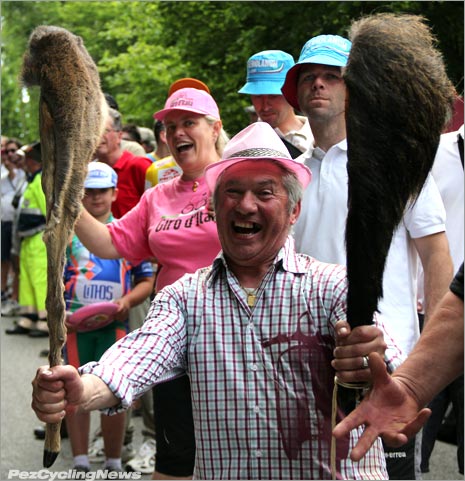 A lot of fans pack their own lunch. At least I think they do… 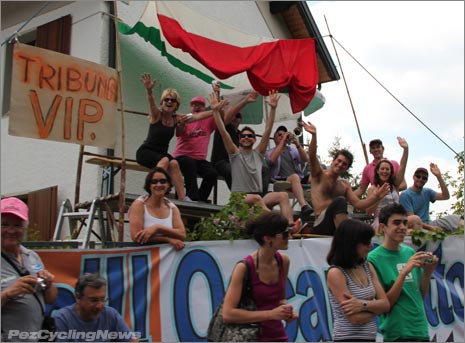 Why let official VIP access stop you from enjoying the pleasures of ‘behind the rope’ access? Turns out Jered & Ashley were just across the road from here. Of course we missed each other. 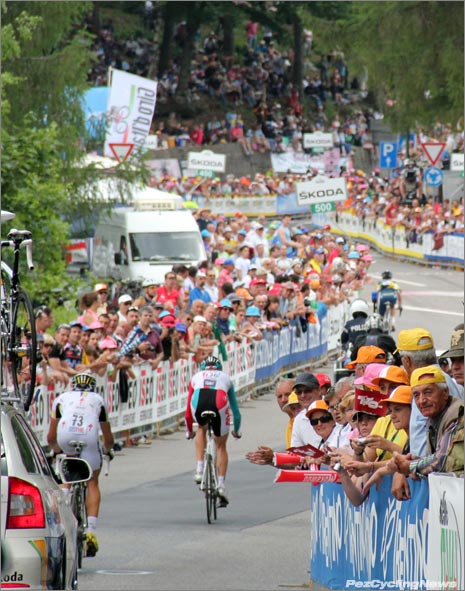 Gretsch’s appearance must have lit a fire under Kaisen’s saddle, because the two went toe to toe for the last 3-4km – a real duel. And even though Kaisen lost the war, he went down fighting – awesome to watch.

DiLuca. Regardless of his tainted past, none of that seems to have affected his popularity. The crowd went nuts when the 107th starter steamed past, and then a again as he rolled back down to the team bus, people were calling and chanting: “stop stop Danilo!” We see it all the time with sports stars – past transgressions make little difference to long term popularity. 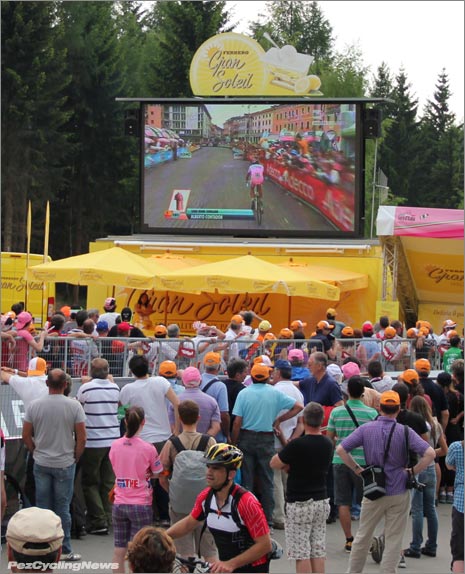 Contador. This race is in the books, and most people I’ve talked to consider Alberto about 3 levels above the rest of the riders here. Who cares if the race has been an utter contrast to the sporting excitement of previous years, Bert is a great champion and watching the world’s best stage races is nothing less than awesome. He stomped ‘em again today by another 34 seconds, then dedicated the win to his late friend Xavier Tondo. 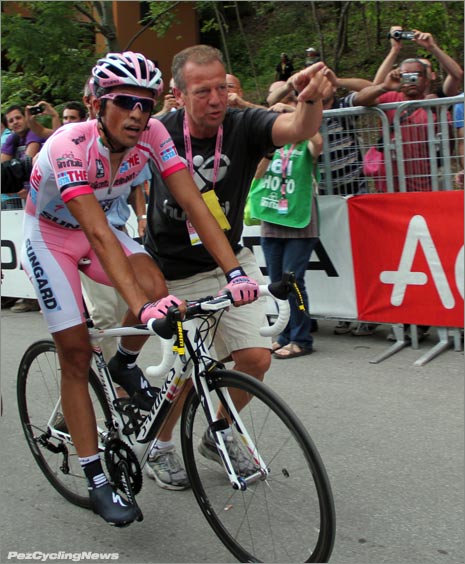 That was huge day – it’s now 9:15 local time – and I stink so bad even I can’t stand it… time to file this puppy, hit the showers, and find some dinner.