Giro di PEZ: In Love With The Dolomiti

Roadside St.16: Finally, after sixteen stages, the big day was upon us. A big day for the riders for sure, but also one for Ashley and myself. Our panorama pic from the Passo Giau, originally taken for Castelli, and then later used by the Giro d’Italia as their image for the 2012 Giro, is one that really started to get our name out. With that in mind, it was with feelings of excitement and pressure that we woke up to a beautiful morning in Bruneck…

Of course, that pressure was all self-imposed. The Giau shot was a special one, and definitely one that wasn’t going to be repeated on a camper-laden Giau later that day. But still, no matter what we did on Wednesday, it was always going to be put alongside that one for comparison.

So, with this admittedly silly pressure, I figured it was best to start the day with a bike ride, because no matter what, each day that includes a bike ride is better than one that doesn’t. I met outdoor and travel photographer extraordinaire, Dan Patitucci, at 9am in front of our hotel, and then it was off to the Passo Valparola. 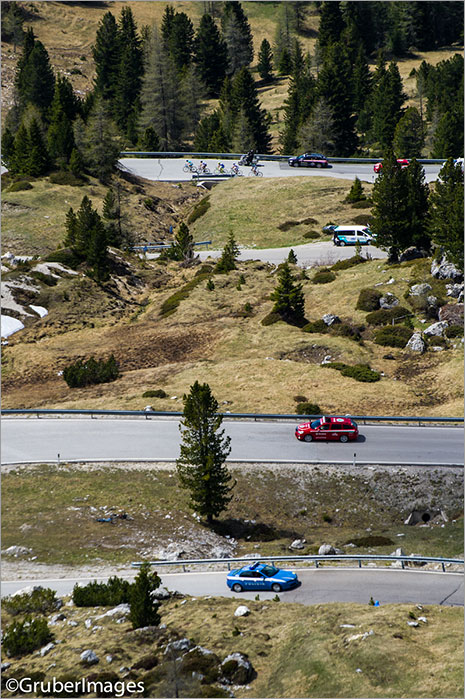 It’s not known as a hard climb, but the numbers lie. Ok, they don’t lie, but they’re misleading. There are some significant stretches of downhill and flat in the official 14 kilometers of the Valparola, so when it goes uphill, it goes uphill in earnest, and of course, it feels all that much more earnest-like when you start heading over that 2000m level. I didn’t realize until later that the pass was at 2200ish meters, which might explain some things, namely that whole I don’t feel like I’m getting enough oxygen feeling.

In other words, I felt terrible. I hate feeling terrible on the bike, but that’s part of bike riding sometimes, right? My mountain run from the day before was not sitting well on my legs. At the risk of sounding like a whiner, I’m a bike rider. I ride bikes constantly. I do not (for the most part) walk, run, swim, play soccer, etc, etc. So when I do run or hike, I’m left mostly crippled for the next couple days. DOMS greeted me in the morning, and kept me company all the rest of the day. Lovely.

What I meant to say was – I had a blast! I had a lot of fun chatting with Dan in between (at first) small, hushed gasps, and the later, just full on nasty breathing. The views all the way up were the kind that leave you with a feeling of longing when you see them in a picture, and leave (at least me) with a feeling of perfect contentment when I’m in the midst of them.

Up, up, up we went, and at the top, Ashley was there, clothes were changed, and it was back to business. I said bye and thanks to Dan and some more new friends, and turned the focus to taking pictures…which of course meant going for a hike. I was so happy to go for a hike. haha.

We found some good spots, enjoyed the buffeting winds along the mountainside, and waited. 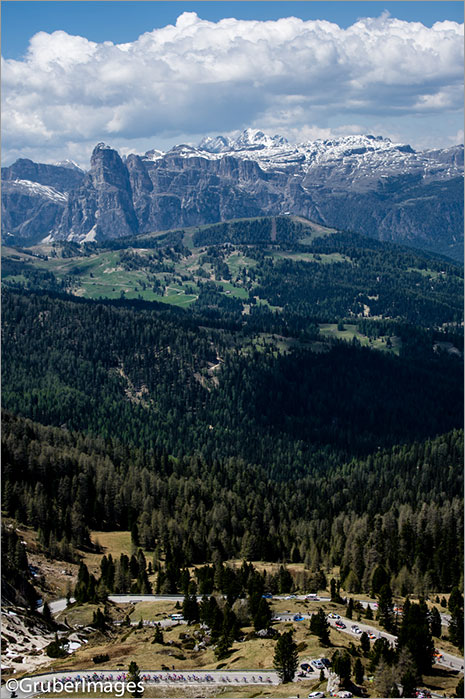 The break approaches up the final set of switchbacks on the first pass of the day, the Valparola. 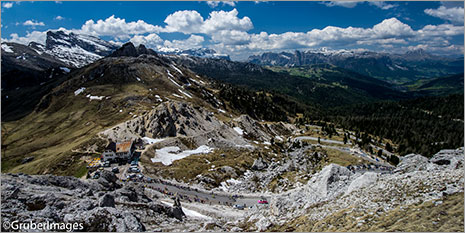 And then they came. From high up, watching a bike race is a curious experience. The typical speed, shouts, honks, whooshing of the bikes, random words between riders, breathing…it’s all gone. It’s quiet up there. It’s just the wind and a very slow moving field. It almost doesn’t look real. 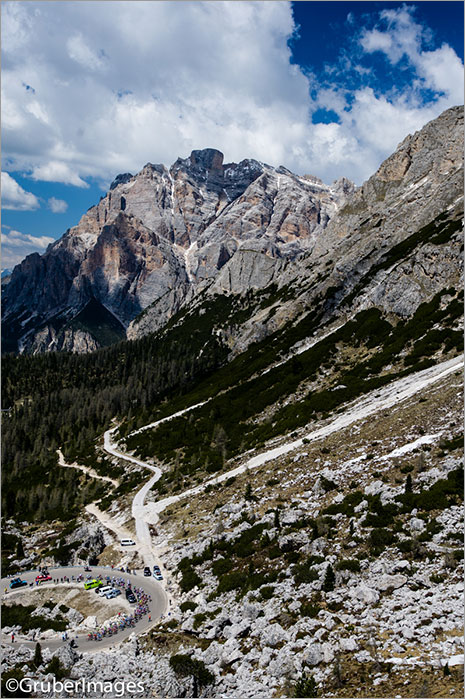 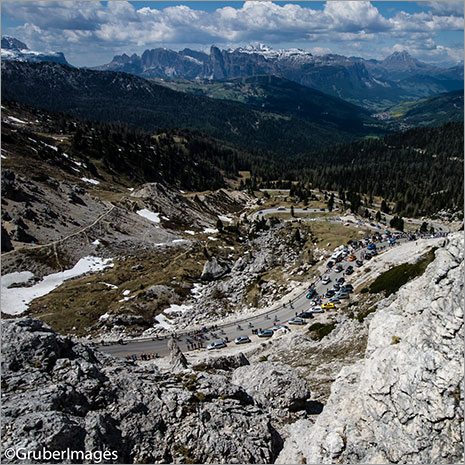 The break was about five switchbacks ahead of the field from my vantage point and chugging along nicely. The field had only begun to splinter, which had to be a nice sign for the day’s gruppetto, as it was always going to be a long, hard one for them. 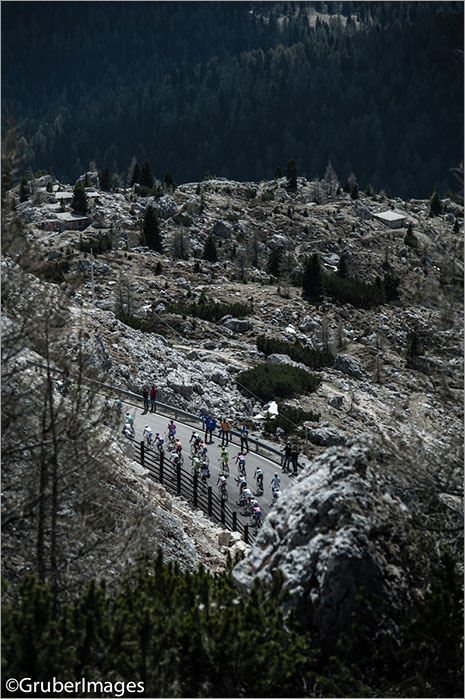 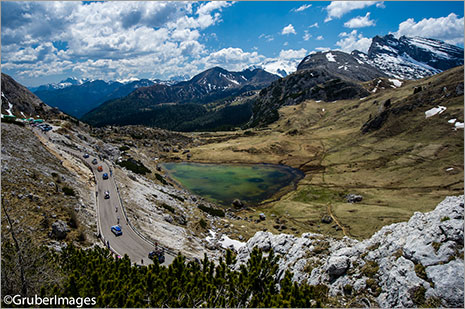 Down from up high we came, into the car, right behind the final car in the caravan, and off we went in the direction of the Giau. The riders had two bonus climbs to take in before confronting the stern grade of the Giau, but there wasn’t any chance of that for us, unfortunately. 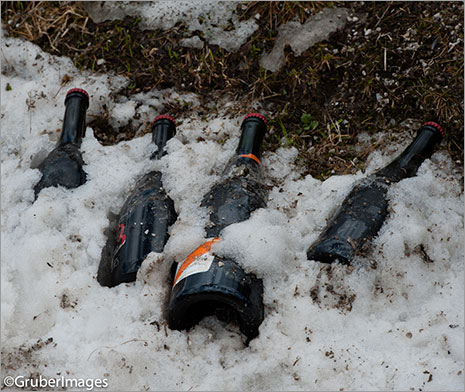 You have to keep your adult beverages cool somehow!

The crowds were out in their Wednesday-best, ranging from cycling kit, to bundled up casual wear, to of course, the crazies in any number of mostly indescribable get ups. 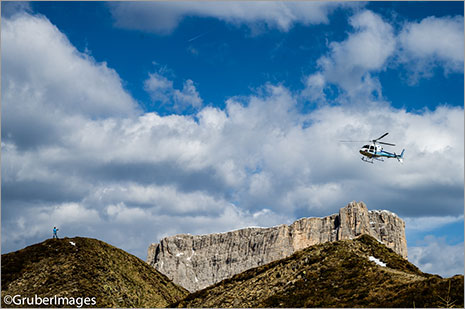 The race helicopter, and off in the distance in blue, that’s Markus Neuert of CycleFilm.

We found a spot just over the top, parked, and went for another hike. We combed both sides of the pass in search of a special spot, but in an amusing revelation, it occurred to us, that the pictures with the race in them were going to look the same as those without it. The road was lined with cars, people, campers, tents, and tarps. From afar, the mass of fans and their accoutrement became a funny looking provisional gutter – and I loved it. 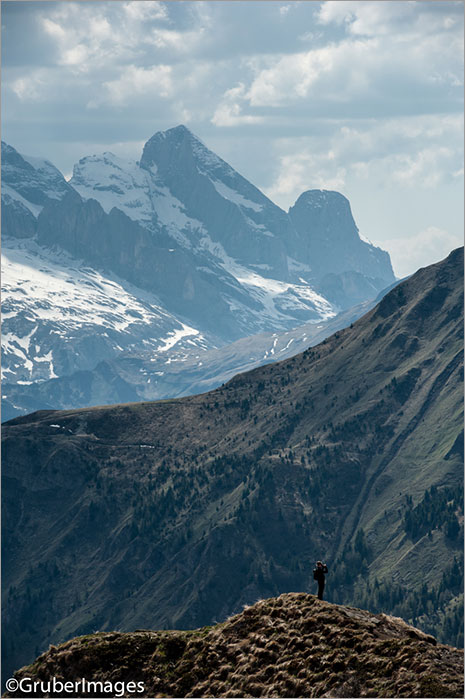 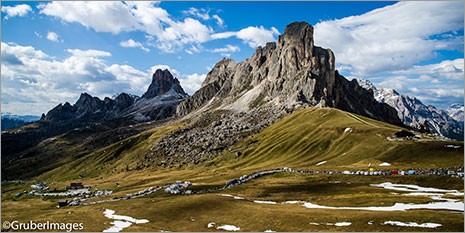 The view to the fantastic madness below.

We went back down together for a few minutes before the race arrived, ran into our good friend, Jason Cardillo, from the fantastic cycling camp, Velo Veneto. I felt bad, as I realized that in my mostly exhausted state and somewhat frantic desire to find the unfindable perfect spot, I could barely hold a conversation. At this moment, I’d like to apologize to everyone that I speak with from here on out, or have spoken with recently – I can’t be held responsible for my words, lack of words, or incoherency, please understand. 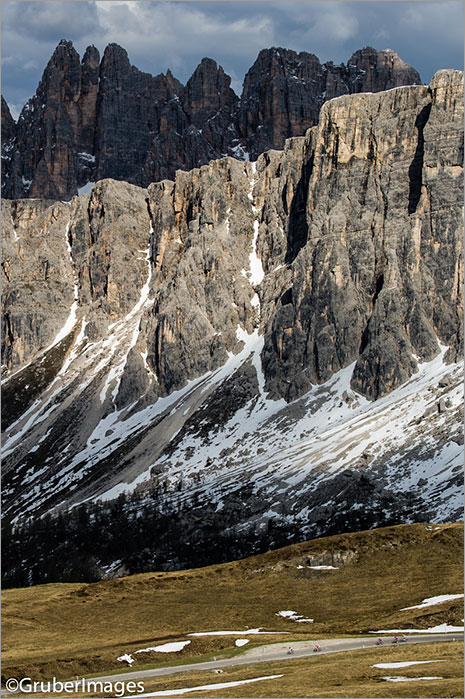 The descent to Cortina d’Ampezzo. 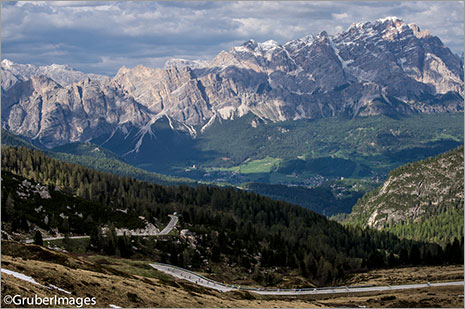 After apologizing to Jason, I went back up the mountain, to a spot where I didn’t have to speak with humans, and that was probably a good thing. Ashley stayed at the very top of the climb to get the riders as they crested the Giau and began the entertaining descent into Cortina d’Ampezzo. While I listened to the chirps of the marmots, watched the helicopters buzz by right in front of me, and enjoyed the serenity of the big mountains, Ashley was getting an earful from another photographer and then a policeman, who yelled at her while the photographer yelled at her. Long story, but the contrast between our two experiences leading up to the race passage is pretty painful, yeah? 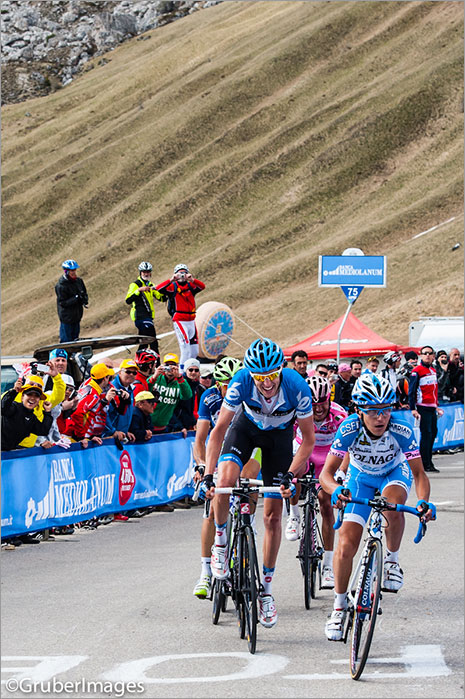 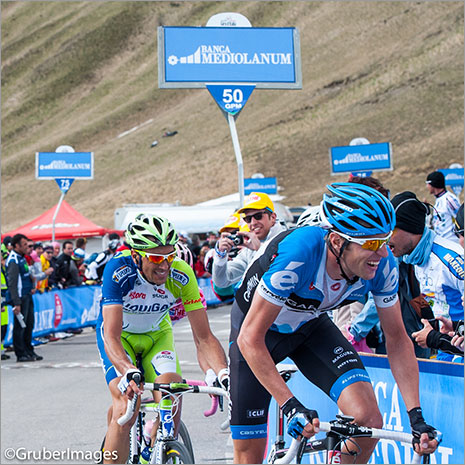 Hesjedal not looking quite as good as Pozzovivo, but then again, he’s about two meters and twenty kilos heavier. 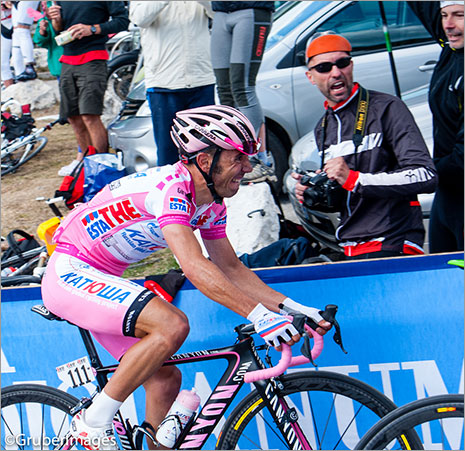 The Maglia Rosa grits his teeth. 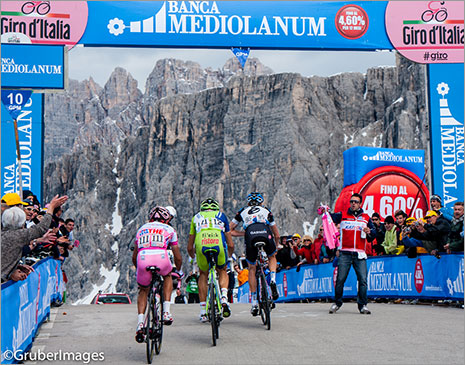 The leaders crest the climb. 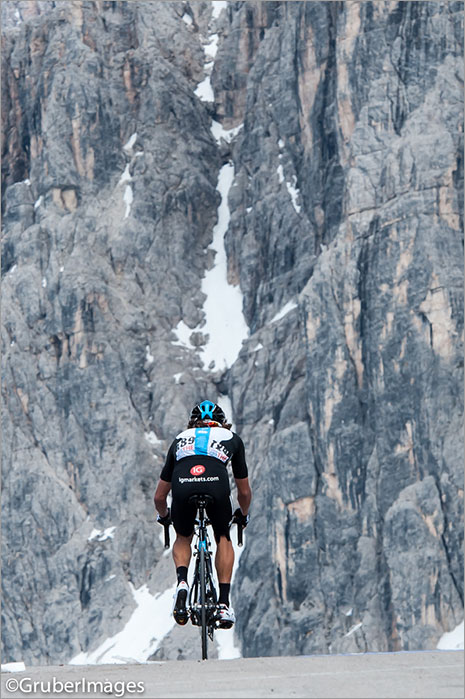 Rigoberto Uran was right behind.

And then they came. I could see them from a long, long way off. The group was six, and even from way up high, it was clear who was there. Down below, the faces were contorted, all of them, save for Domenico Pozzovivo. Pozzovivo looked like he hadn’t even begun to pedal, which is kind of unnerving considering that everyone else looked like they were in the final throes of giving birth. 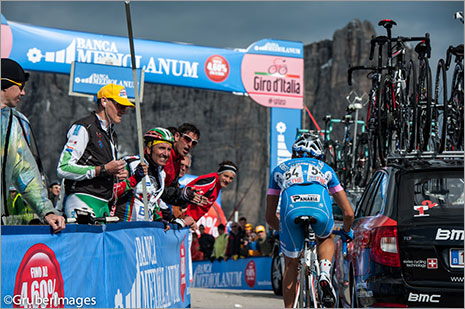 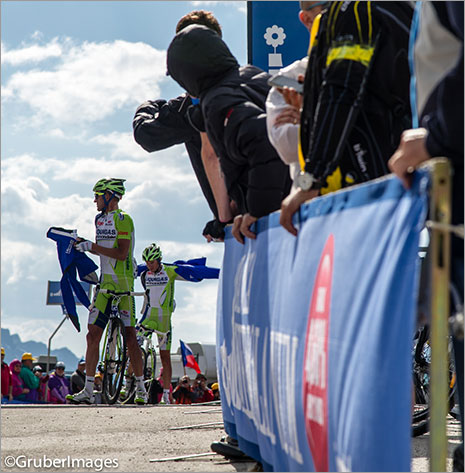 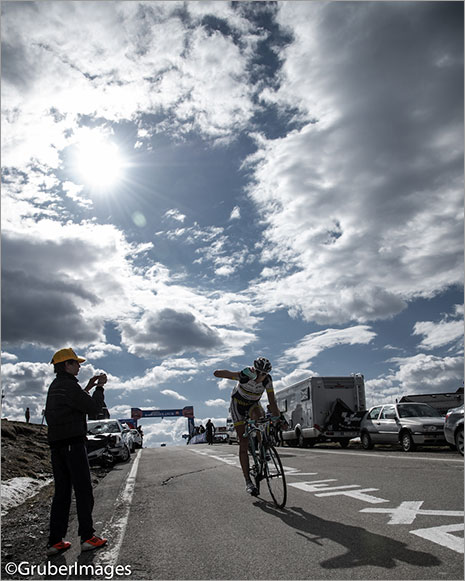 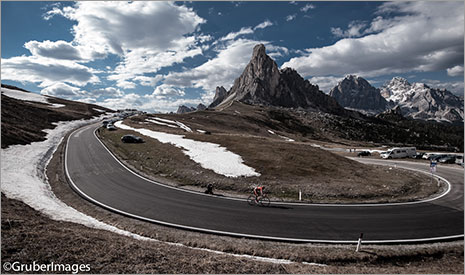 We had a lot of time following the first riders, so we kept moving, kept looking for pretty spots. In the end, I think we did ok. It was beautiful. I hope the pictures convey just how special the Dolomiti are as a theater for the race, that is in my opinion, the most beautiful of them all. 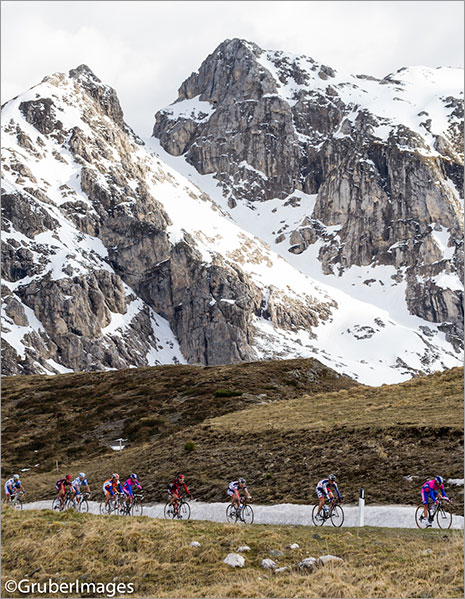 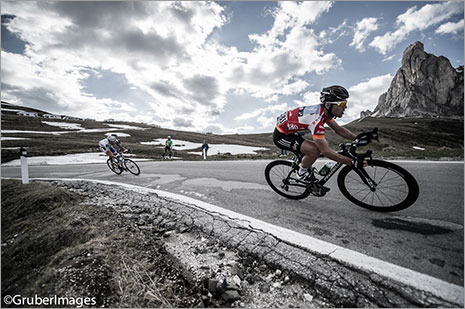 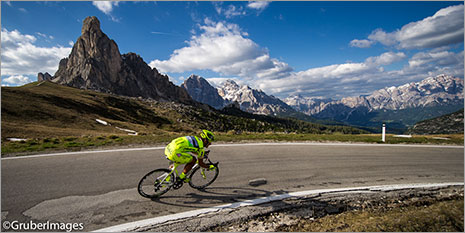 In his customary place in this year’s Giro, Andrea Guardini was last man on the road.

Another day done. I wish we could do it over again. That was a good day.