Roadside St. 20: As we’ve seen so often on this Giro, the best laid plans often become merely a starting point for a daily adventure unimaginanable just the night before. After yesterday’s leg-busting day riding 6+ hours over the steepest roads I know, today became a welcome ‘car-day’ in the mountains around Bormio.

Those Best Laid Plans
Swinging open the shutters at 8:00 this morning revealed a much friendlier sky than had been suggested last night. That was a good sign for a planned ride up the front of the Gavia, before descending and climbing the Tonale to see the stage 20 action. 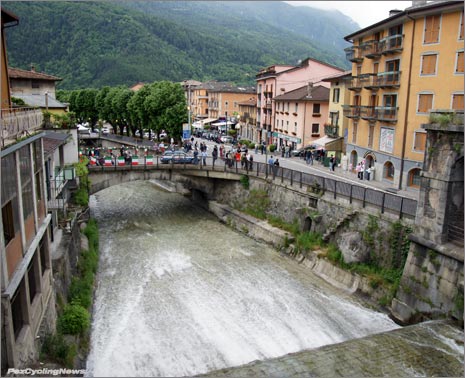 Edolo is the perfect base for riding in these parts – all the rides end with a descent.

The only protest came from my legs – ‘thou shalt not ride’ was their commandment, which was confirmed upon climbing the 4 flights of stairs back to my room after breakfast.

Last night I’d sketched out a few options, none of which really stood up as Plan A. Sometimes all you need is a good night’s sleep, because as clear as the day was this morning, my Plan A shone brightly above my still sore legs. 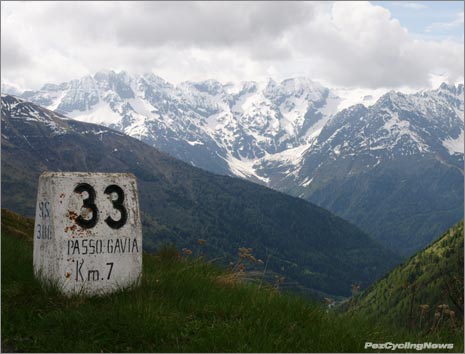 Gavia Ho! The views from up here are nothing short of spectacular.

I smiled to myself as I thought of the riches my day would offer – a drive over the Gavia to the start in Bormio, arriving in time to enjoy the start village bounty of free beer samples, espresso shots, iced tea, pasta, cheeses and whatever else I could consume in the pre-start frenzy.

Then a return trip over the 2618m Gavia while the race headed off to conquer peaks a-plenty like the 2315m Forcola di Livigno, 221m Passo di Eira, and the 2291m Passo di Foscagno. I’d find my way to the press room atop the summit finish at Tonale with plenty of time to get the story cracking, and if all went like I imagined, I’d enjoy a nice hot lunch in there somewhere. 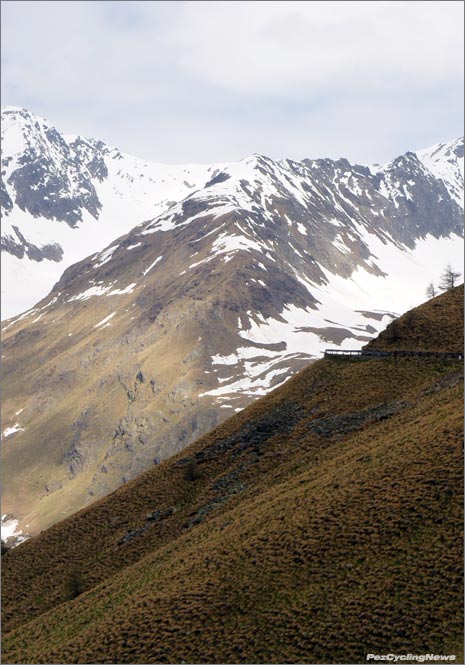 It’s 6:15PM local time as I write this- not from the press room, but instead from the tiny table/ desk in my room at the Albergho Angelo in Edolo. The hotel here is great – small, family run, not the quietest rooms (ie: I heard a trio of snoring guests the past few nights from rooms nearby), but priced right and worth checking into if you don’t need internet. They do have it – but useable only on one house computer, which means I’m emailing these words and pics to Jered for final posting.

Once that’s done – I’m blasting off for a 2 hour drive to Verona, and hopefully a jump on tomorrow’s final stage TT.

But I digress – I’d last enjoyed the Gavia in 2006 by bike, and driving over the 18km climb today was a rare treat as the roads were closed except to a few dozen cyclists and hikers who wanted to get an early start on the climb, hoping to see the race come through around 5PM tonite. 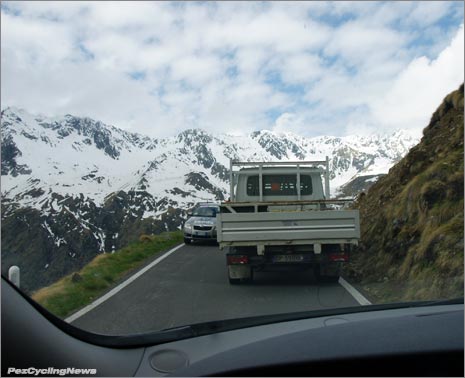 It’s a beautiful climb, the narrow road is often one-car only, and a couple times we were blocked as road crews did last minute fixes to the surface.
The sun continued to shine as we climbed to the highest point of this year’s Giro, and the amount of snow still up top was most winter-like. 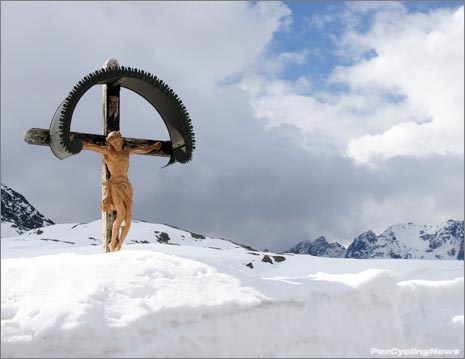 It was a balmy 5C degrees up top, and for now looked like an awesome day for a bike race. The only thing about the weather here at this time of year, is that it changes about as fast as my daily plans.

But the sun stayed out all the way down to Bormio, some 40ish kms of descending from the top, and although we made it there in just 90 minutes from Edolo, we were delayed a few more by local traffic… 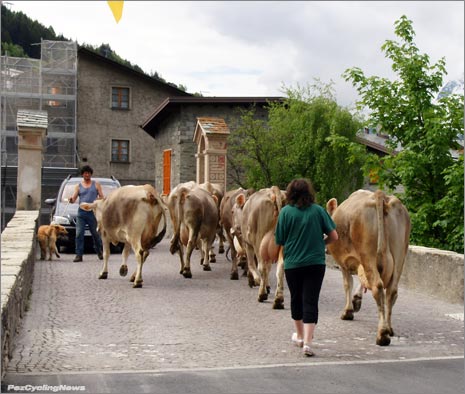 Into the start village, the usual frenzy was in full swing. Regardless of how small or remote a town the stage rolls out from, there are thousands of fans eagerly waiting to see the sport’s biggest stars. 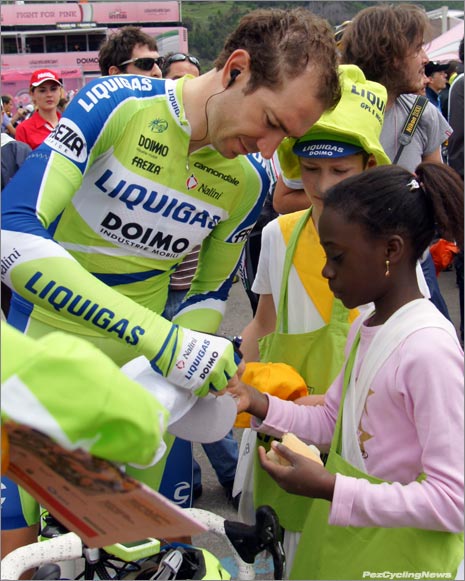 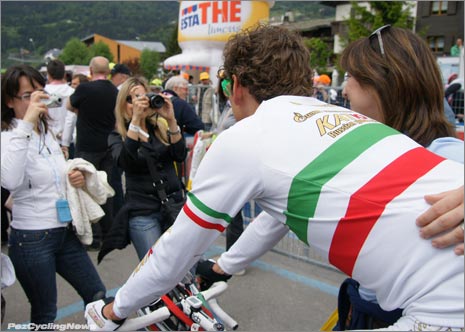 There’s a show that runs on RAI during the opening hours of the stage, something called the ‘Giro Cafй’ I think – where an endless stream of Italian celebs (past, present, and future) yabber on to fill those 2+ hours of not much happening in the bike race. I’d seen it a couple times on tv – and now here I was gawking away at the set right here in the villaggio. 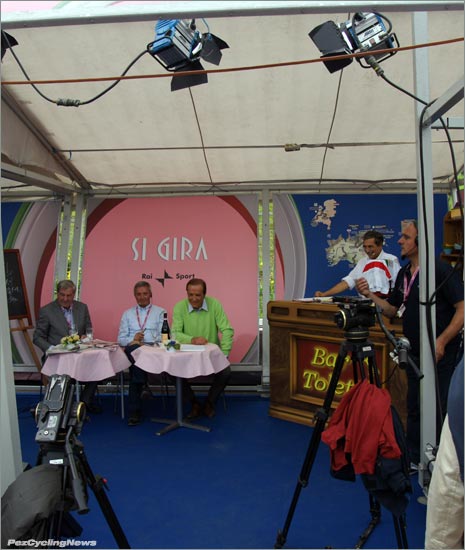 The unquestionably sexy – and Italian – Barbara Pedrotti was on stage and filling all blank air space with words, questions and factoids about each rider as they approached the sign on. The big boys get called to the front of the stage to answer a few questions for the fans, and how she keeps the chatter going is a mystery to me, but I’m sure her looks have as much to do with holding audience attention as anything. 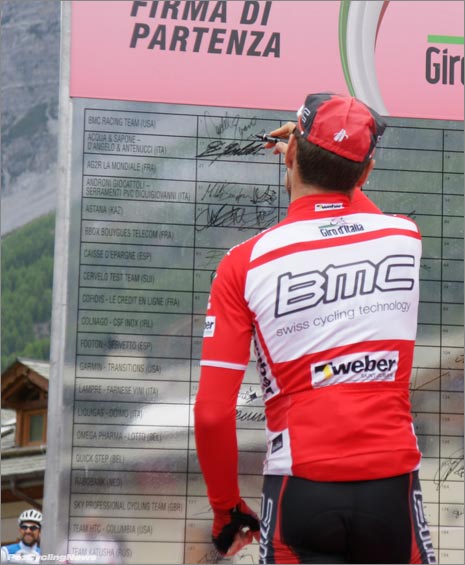 Cadel is loved by the fans here, and regularly gets a huge ovation at sign on. It struck me how much quieter the fans were when Vinokourov signed on. I suppose he’s payed his dues according to the rules of cycling, but perhaps public opinion doesn’t follow those same rules. 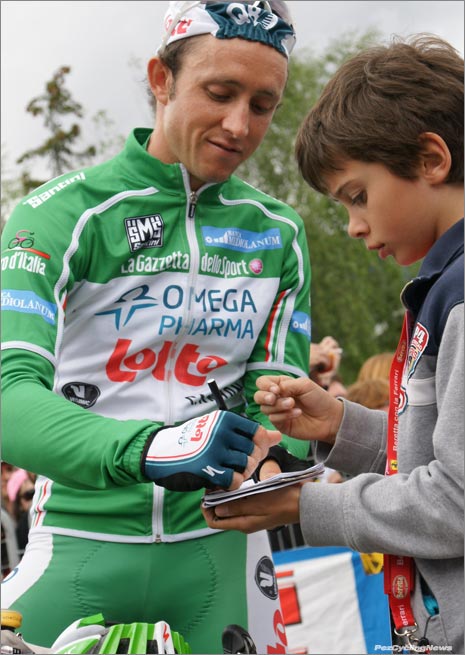 Matt Lloyd was still in green – but technically in second place in the category after Basso took both the pink and green jerseys yesterday. By midway in today’s stage after scoring more points, Matt was rightfully the owner of the KOM jersey – although at writing I’m not sure if he’s kept it at stage end. 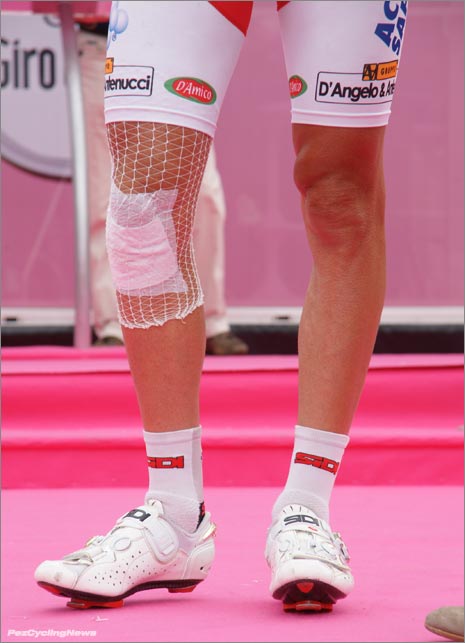 Standing right in front of the intro stage, you can’t help but notice everyone’s legs. Stefano Garzelli has been a factor many days of this Giro, and struck me as looking much younger than a guy who’s been around so long should. 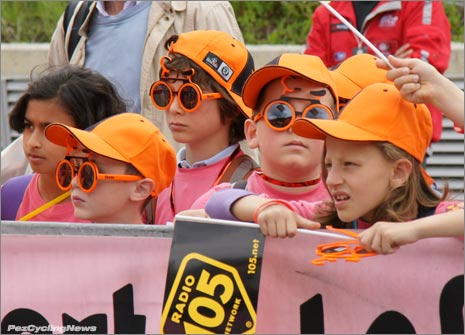 It also struck me that most of the fans here likely won’t have a clue who wins later today, but they could care less. This rolling circus is about getting close to the big stars you see on tv and in the papers, and it looked to me that no one was complaining about the details like – ‘what’s that pink jersey stand for…?’ 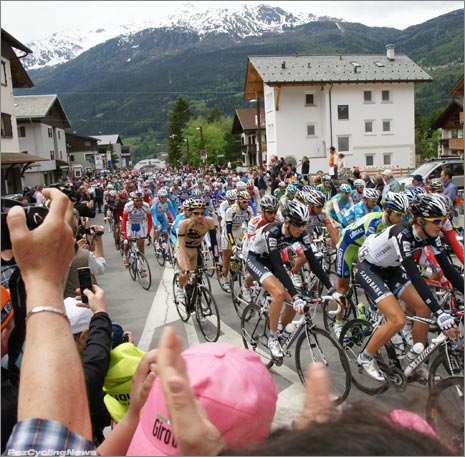 A few minutes past the promised start time of 12:20, the race rolled out of Bormio, with riders looking at another long day of climbing ahead, and most local fans looking to find a nice lunch.

For me it was time to revise my plan, as word had spread that my vehicle pass wouldn’t get me access to the Gavia – it was closed to all but the race proper. So down the valley I sped – direction Mortirolo – with a chance to climb it a second time in two days – and take the short cut over the mountain. 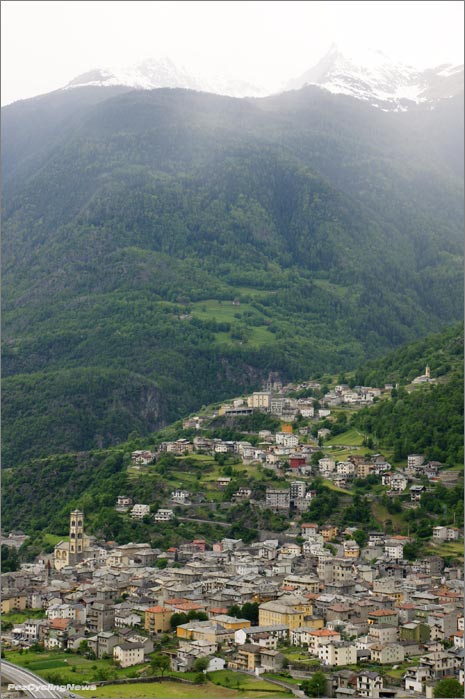 I chose the easier climb of the Mortirolo which starts in Grosio, and although it’s not as steep and the road is slightly wider – I’ll say this climb requires 100% concentration from behind the wheel – as guard rails are sparse, and very steep cliffs are abundant. 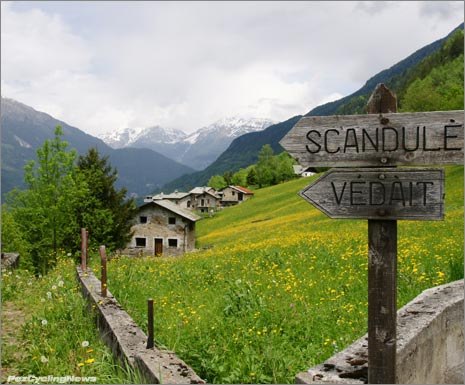 The views from the climb are spectacular – but perhaps more surprising are the number of houses, abodes, and other signs of life that dot this region. Pretty peaceful livin’… 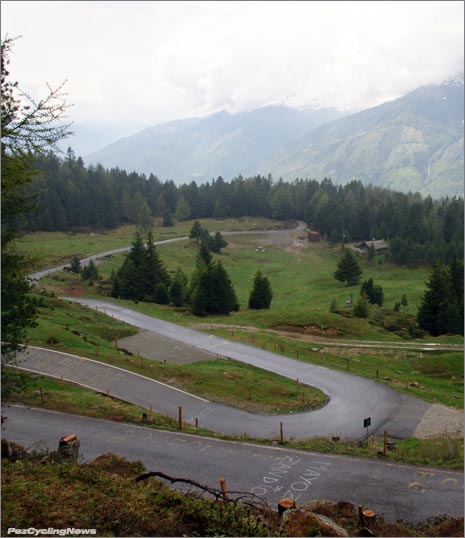 Sure enough, as I joined the race course from yesterday’s stage, the cloud shrouded mountain top turned on the tap and the rains came down. No worries for me- I was safe and dry in the rental car.

I stopped to survey the summit of the Mortirolo, where just 24 hours ago, this expanse was filled with tents, banners, a jumbotron, and thousands of fans who’d arrived here under their own power.

The silence today was eerie, peaceful, and amazing. The air was crisp, and I filled my bottle from a nearby stream. I was way off course from my original plan, and still a couple hours from my destination.

But none of that mattered.

Like I said – some days it’s just not about the bike race.