Rest Day Roadside: Welcome to a different Italy where the people speak German, the chalets look Austrian and the roads are twisting, narrow and in some places, unpaved. Don’t let any of that fool you however, as the people up here get ready to prove tomorrow that their national colours are still red, white, green and PINK!

Today’s plan was to take a look around some of the team hotels and take a look at the equipment the squads would be rolling out on tomorrow.

The drive to the start for tomorrow’s 12.9km mountain time trial in San Vigilio di Marebbe, took about two hours more than I had anticipated it would take (yes, sat nav, the limit here is 90, but 40 on these twisting roads will do just fine!) but was an amazing trip through the ski resorts and high fields of the Sьdtirol region.

The roads along the plain at the top are flat and fast, but very narrow with no shoulder, leaving me wondering just what the heck bike riders who come up into this area actually do.

I passed the Acqua & Sapone squad just about to turn out onto the main road and was thinking that they were probably thinking the same, but then I spotted Garmin out for a roll and all became clear. 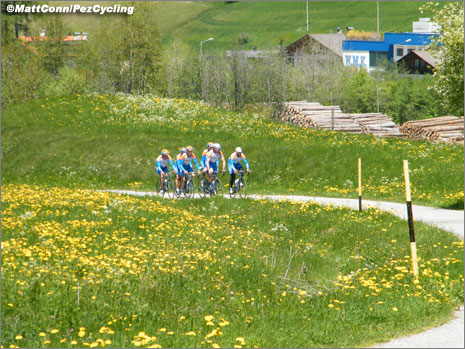 Right the way through this region there are a series of bike roads that run alongside the main traffic thoroughfare and with mountains on either side and only those with a death-wish on the main roads, the cycle paths were getting a workout from locals and visitors alike.

We also caught up with Cameron Wurf out the road. Wurf had been for a ride with the team in the morning, but the trip to the coffee shop was a little less than he needed, so he ripped out 40minutes behind the car later in the day. 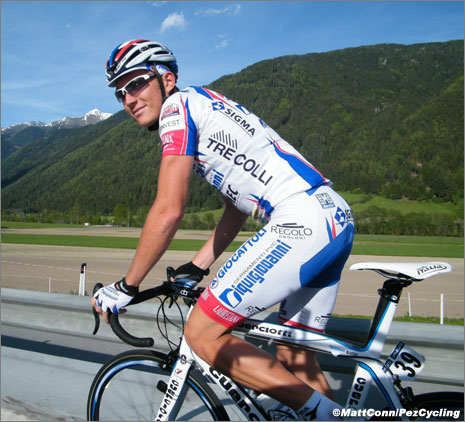 Team Check
The job of a mechanic on a Grand Tour is not an easy one. Apart from preparing all of the bikes prior to the race, the mechanics work long hours, every day to make sure that the riders on their team have the best possible equipment in top working order, for every one of the 3469.3km in this year’s Giro.

On my way into the press centre at the start in San Vigilio, I stopped off to see the Omega Pharma – Lotto team whose mechanics were in the process of cleaning yesterday’s grime and dust off the race bikes.

I chatted to mechanic Geert Eelsing as he washed Dutch rider Michiel Elijzen’s bike and he told me that today was actually very relaxing for the support staff at Omega Pharma.

“We had nothing to change on the bikes after yesterday’s stage as the bikes for the time trial will be exactly the same set up as they were for the Zoncolan stage,” Eelsing said. 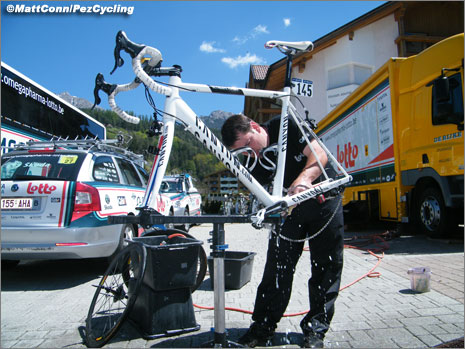 Getting all of the race bikes and spare bikes set up for these two days was no easy task however, with Eelsing saying that after the stage to Asolo, they worked well into the night to have everything ready for the start in Mestre.

“It’s actually very good for us with our hotel right here near the start as we don’t have to pack up the truck tomorrow morning and transfer everything to the start. So, with no bike changes to make and no following cars to prepare and no time trial bikes to worry about, it’s like we get two rest days in a row.”

Eelsing also said that this was the first real rest day for the staff as the transfer from the Netherlands was a whole day of driving and then setting up the bikes or the team time trial. With the three or four days before the start and then the change over of all the wheels and tyres for the strade bianche of stage 7, Eelsing said these back to back ‘easy’ days were a long time coming. 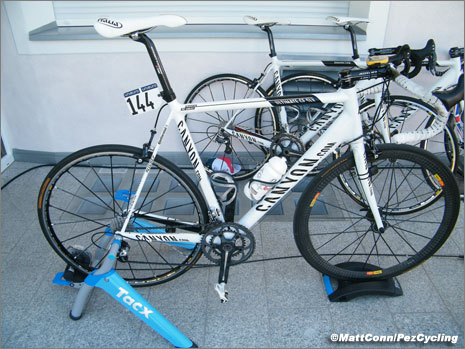 Francis De Greef’s Canyon was set up in the trainer and looked to be one of the next up for a wash.

So what gears were they riding?

“All of the bikes for tomorrow stage will have 34/29 as their lowest gearing and we won’t have to worry about spare bikes as the mechanics will be following on the motorcycles of the organisers with just wheels.”

Back on the highway and either a long flat detour or a twisting mountain ‘short cut’ from the Partenza, are most of the other teams. Sharing the same hotel (With Quick Step and Rabobank next door) are Liquigas, Garmin and HTC Columbia. 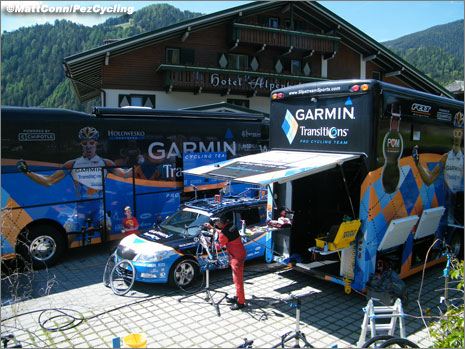 While Garmin were set up in the front, HTC Columbia and Liquigas were around the back. 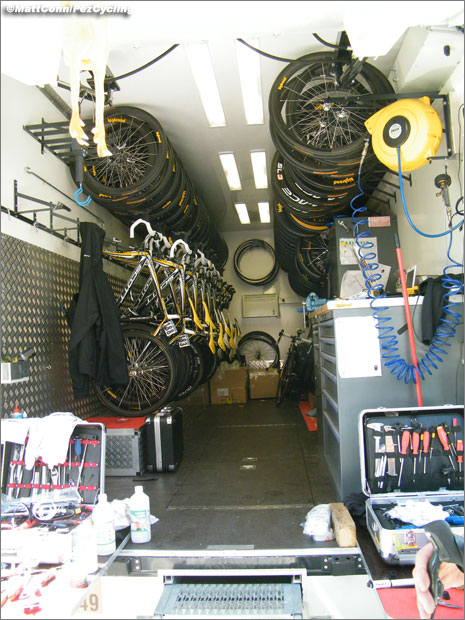 Just like the guys from Lotto told us, the HTC crew were busy getting the bikes ready and stacking the truck to be ready to drive to the start in the morning.

With the whole day to get the jobs done, and not much to do to the bikes that were used yesterday, re-wrapping the bar tape on Craig Lewis’ Scott and checking all of the tyres, was about all that was required to go with the regulation wash and blow dry. 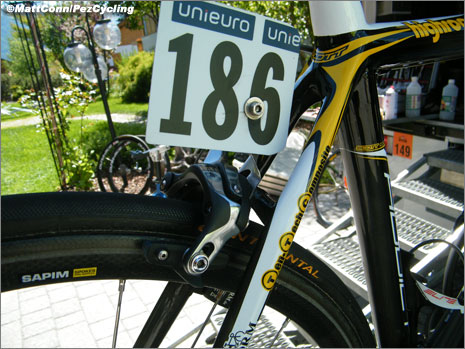 The only change to the bikes was that in the time trial, the riders will be using these lower profile wheels than normal.

Next door, the yesterday’s stage winner’s bikes were receiving a lot of attention (from the media, but not the mechanics). Both Basso’s race bikes were there and when the mechanic changed the race number from the bike he won yesterday’s stage on, to the one he would be riding tomorrow, I asked him what differences there were between the bikes. “None.” 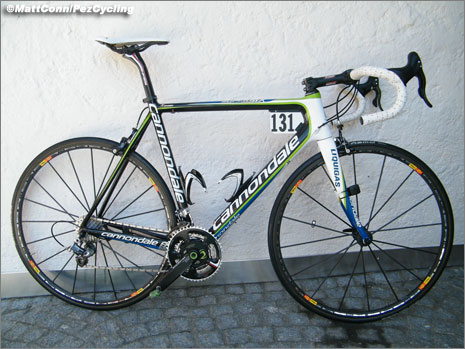 On the back, the Liquigas boys will be grabbing a 29tooth cog when the going gets really tough.

Co-team leader Vincenzo Nibali was finishing off his press conference and heading back to his room for some relaxation. Like many of the other riders and journalists at the race this year, he thinks that Scarponi will be the man to watch in tomorrow’s time trial. 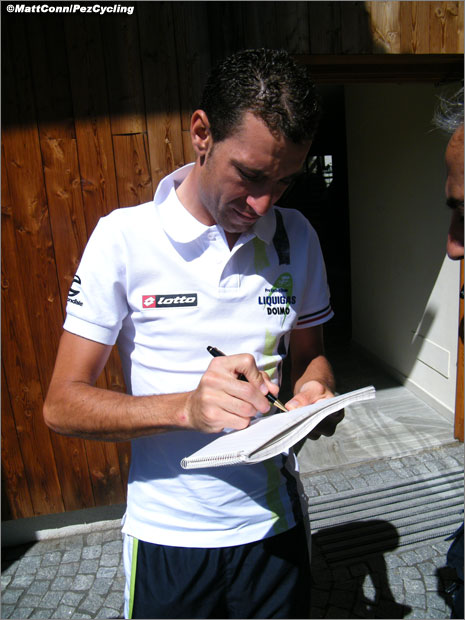 To The Climb, Batman!
The first rider hits the road at 10O00am tomorrow morning so there won’t be much chance to have a look at the course. After visiting the Omega Pharma Lotto boys in the village, I took the shorter (in kilometres, but longer in time) route of the first part of the time trial to make it back to the hotel. 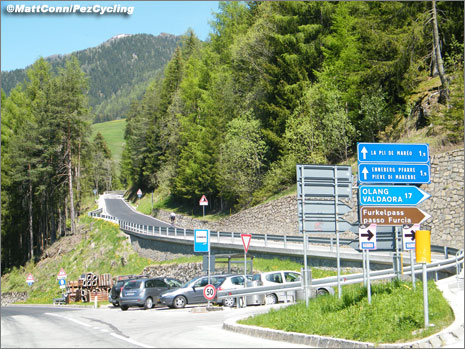 The race book describes the stage as…

Individual time trial entirely on a climb, divided into three sections. The first, from San Vigilio to the Pieve di Marebbe, is on wide roads with light climbing and a succession of curves broken up by brief straight line sections. 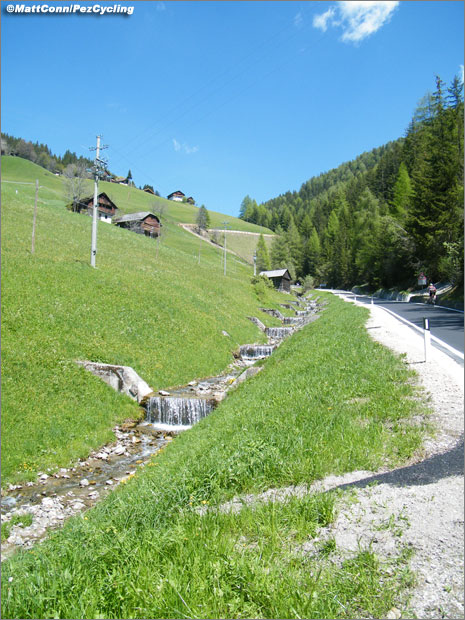 The straight section up by the stream with the curves visible way up above.

After the turn, things get a little nasty… The next section climbs nearly 600 vertical metres in just 4.5km on the road.

The second part is a rapid ascent, particularly the section where the turns are, where the gradient is always above 10% and the maximum is 16% just before the Passo Furcia. 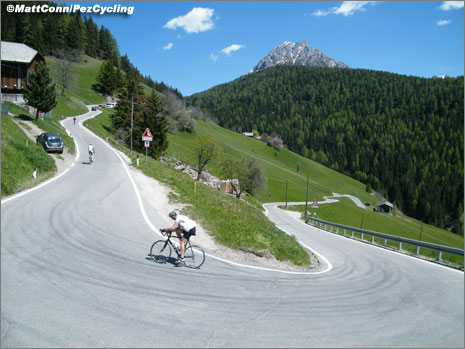 Here are the curves and you now only have 7km and 700m of vertical gain to go!

The actual climb of the Kronplatz or Plan de Corones, starts at the Passo Furcia with 7.6km covered and will also be the location of the intermediate time check tomorrow. 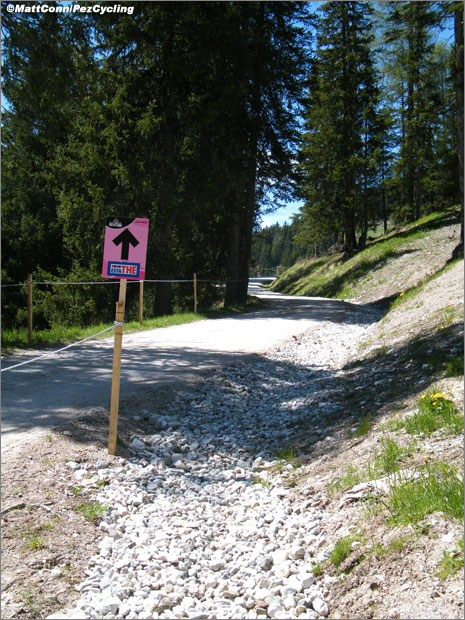 In the picture above you can just see the last section of paved road before the course turns left and heads into the forest for the final, unpaved section of the climb.

At the Passo Furcia the third section starts. Entirely unpaved (the Italian ‘sterrato’ is a much better word), charachertized by lung sections with a gradient that is always around 20% and with a maximum of 24% 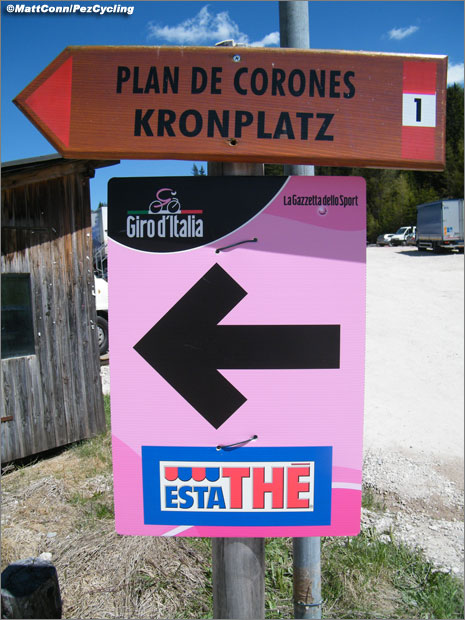 Tomorrow the plan is to head to the top on the cable car and work back down to the finish, so stay tuned for some pictures from the gravel section and some painful grimaces from all of the riders who have too drag themselves up there for our entertainment.