Roadside St.18: After yesterday’s superlative laden adventure through the Dolomiti, the Giro left Italy’s most beautiful mountain range just as quickly as it came and headed to the Veneto plain. We were once again on the road in search of pretty places – we had no trouble finding Valle di Cadore.

We spent a good portion of last night washing our clothes by hand in the bath tub. At one point, Ashley and I were standing in the tub together, stomping on our clothes in murky water, laughing at how ridiculous it all was. When the morning came and our pile of freshly, mostly cleaned clothing was still anything but dry, there was only one thing to do – line our dashboard with clothes and let the combined force of defrost and the sun do its magic.

The looks we got from the policeman on the side of the road as we headed to the stage start were memorable. I can only imagine what the view must have been like looking in. I reckon we must have looked like a couple of hobos who had stolen Giro car passes.

The morning started out with the fantastic news that a helicopter ride lay in our future – as in today. We were giddy for a thousand rational reasons, but the number one reason was of course: a helicopter ride! I had never been in a helicopter before, so to get the chance to ride around in a helicopter AND take pictures, of the Giro no less, it was a dream come true. 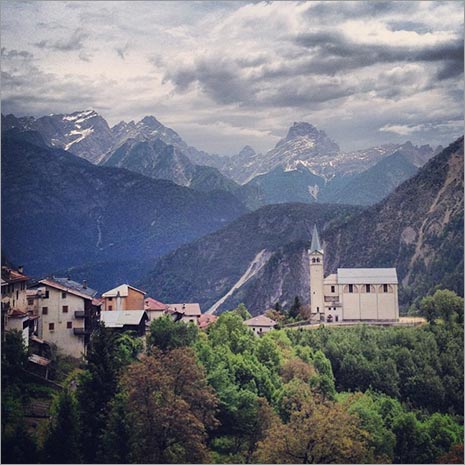 Valle di Cadore – the most welcoming town we’ve ever come across.

And just about as quickly as it was mentioned, the opportunity evaporated. A VIP filled my slot, and that was that. It’s hard to be bitter though – considering what a VIP will ante up for a ride like that, I would have booted my butt out of there even faster.

Tremendously deflated – we were driving to the start line at the time – we weren’t sure what to do. I hadn’t done any real course research, because the helicopter ride made that all but unnecessary. Fortunately, these were home roads for Ashley and myself. We spent most of last year in the area, which the stage would pass through a bit later on in the day. 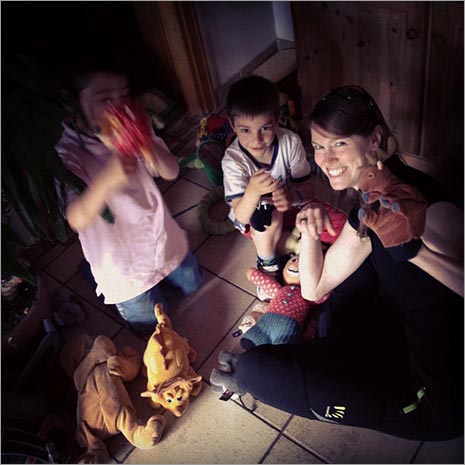 Pietro and Filippo helped make sure this was a race passage we won’t soon forget.

Unfortunately, that wasn’t much help, as the day was all about leaving the big mountains, which means one thing: valley roads. Meaning – we had one shot early, and then we could do a risky rally over a couple of big passes, or, we could shoot for later in the stage and a safer combination. The morning’s disappointment left me feeling a bit frisky for some reason, so when we rounded a bend not far from the day’s start and before us lay the small town of Valle di Cadore with its huge mountain backdrop, old houses, and island of a church, we knew we had found our spot.

Moments later, when we got out of the car to walk around and see if this really was the spot, we had our suspicions confirmed when a stranger yelled at us from three stories above us – would you like some coffee?

Sure, that sounds nice!

He invited us into his house from three stories above with no prior conversation, no nothing – he was pretty much just the friendliest person we could have ever imagined running into.

Roggero was his name. He had a wife, Miriam, and two sons: Pietro and Filippo. We spent the next hour or so chatting with them, smiling, laughing, completely taken aback by just how special this was. 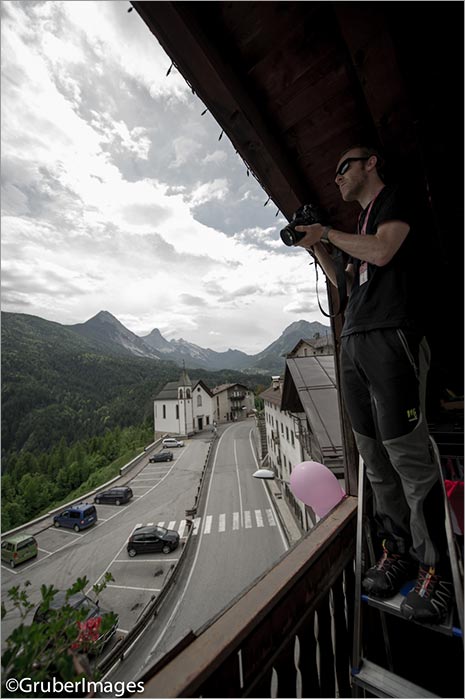 We’re wrecked right now. I feel like an exposed nerve, volatile in every way. Before today, I had wrongly assumed that this volatility was only a negative thing. Today, it was a positive. It meant so much to be taken in by a complete stranger – it was like he somehow knew that these two figures bumbling out of the car below needed some friends. We were only too happy to be the object of such niceness. It was overwhelming in the best way for me. For the first time in a long, long while, I stopped stressing about the race, and just enjoyed trying to make out Ashley’s conversation with our new friends. My Italian is rotten, hers is getting to be quite good, so for the first time in my life, I find myself doing a lot of listening – and I’m more than ok with that. 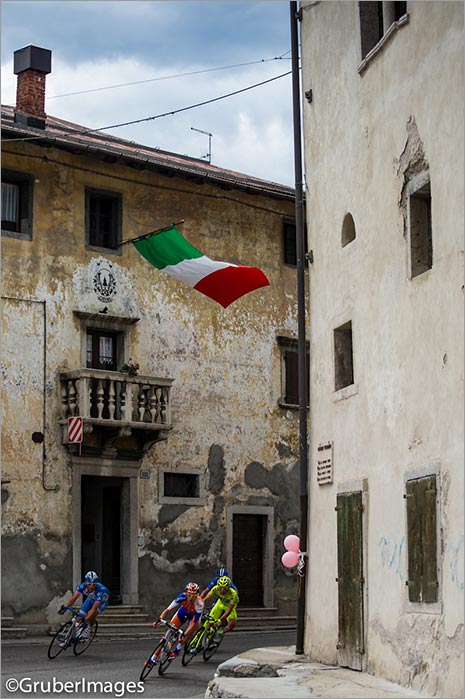 The break rolls into view.

Unfortunately, the playing with the two little ones and getting to know you time came to an end, but I felt rejuvenated, excited, ready to go. Roggero provided a small step ladder, so that Ashley could get just that extra little bit higher on the balcony, and I headed down to the road to find a spot at the big curve in the middle of town. 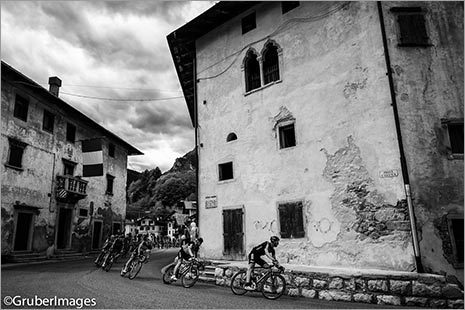 Back roadside, I found more nice people – they were everywhere in Valle di Cadore. It didn’t take long before they found that I was American, was shooting for the Giro, spoke little to no Italian, but plenty of German. Once again, I had that overwhelming feeling of gratitude and appreciation. I don’t think I’ve ever felt so thankful for friendly strangers. 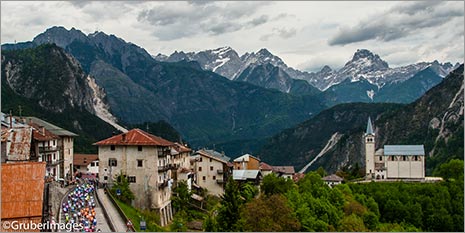 I would say that the race careened unexpectedly around the blind corner, but that’s impossible considering the army of lead cars and motorbikes that precede each passage. Even with the lead vehicle warnings, the race burst into view in surprising fashion, and it was gone just as fast as it came. 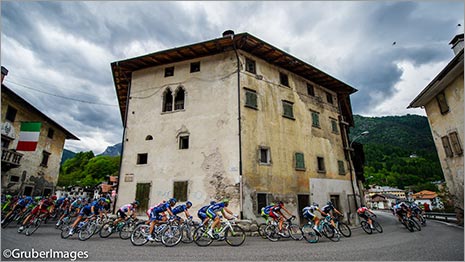 The field negotiates the corner that nearly had the number of a speeding policeman just a few minutes before. 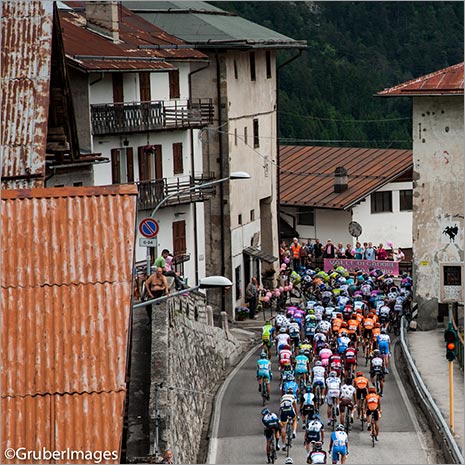 I clicked like crazy until they were out of sight, and then turned back to the small town of friends. I said good bye, met up again with Ashley, said good bye to our friends Roggero, Miriam, Pietro, and Filippo, promised to return at some point (and I really do promise), and we were on our way, back into our little bubble.

We hoped to rally across two passes – Cibiana and Duran, then boogie down the valley to intersect the race again near Cesiomaggiore.

It didn’t happen. We made a good effort, but no dice. 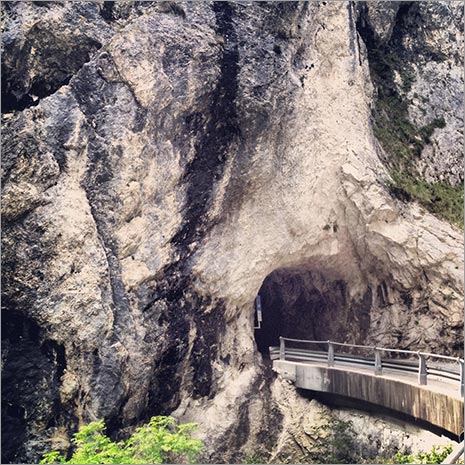 If you ever get the chance to ride your bike through the Valle del Mis – go for it. It’s wonderful.

For once, I didn’t freak out, didn’t stress – it was just a moment of – oh well, I guess that’s it for today. Tired, we looked back at the map and realized just how close our old stomping grounds were in Fonzaso. Instead of heading into the Veneto proper and our hotel for the evening, we crossed another pass, enjoyed the rocky tunnels of the Valle del Mis, and eventually wound up on the doorstep of Manifattura Valcismon, that is to you, me, and most everyone else – the home of Castelli and Sportful. 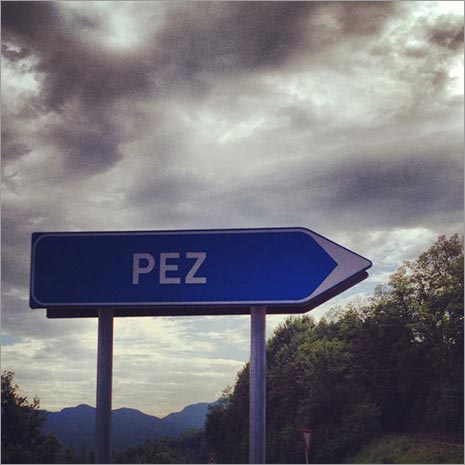 Once again, it was a welcome moment to see good friends in person for the first time in many months. It was a day that I absolutely didn’t expect in every way, and while it didn’t end up being the most fruitful on the picture front, it was a bountiful harvest of happiness.

I’ll take that, thank you!

*****
For LOTS more images from the Giro, please head over to Flickr.