Admittedly, working out exactly which tram to get from Amsterdam’s Burgerweeshuispad out to Damrak proved a little beyond my fuddled brain, and that was without venturing anywhere near the ‘Resin Cafй’. But PEZ, did in fact, eventually, find its way to the teams presentation. Read on!

The signposting for the indoor Team Presentation was also a little bit on the sparse side … in fact, we didn’t see a single indication until we stumbled across the Theatre Beurs van Berlage itself. Inside, though, the stars were out in force … 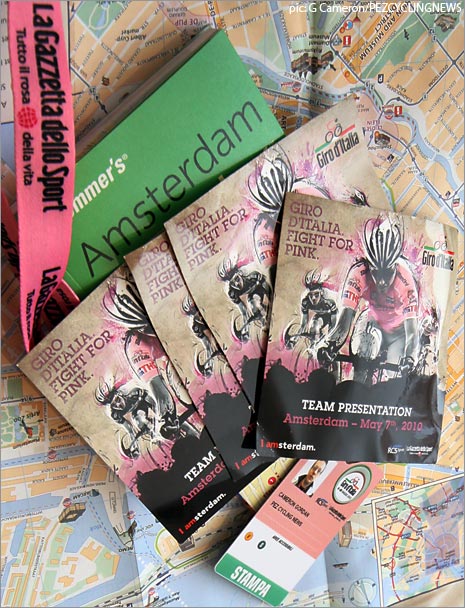 … I’m not being unkind in not telling you about Androni Giocatolli and Ag2r. We just missed them because when we rolled into the venue slightly bedraggled, we were rebuffed at the door of the auditorium by a security guard not to be messed with. We thought our luck was out but an “anonymous donor” to whom we are very grateful handed us some invitation passes: “There are no seats left, but here you go …. I don’t know you, by the way!”

We’re in! Down to the front to see what’s going on, and we’re in time to see Garmin-Transitions hit the stage, to a hearty welcome. Team-leader David Millar gets the lucky ticket; he has to sign the model’s shirt and does so with aplomb, carefully (very carefully!) dotting the ‘i’s in his name! Bet he’s glad his parents called him David now … Millar is a class act in front of a microphone and tells everyone that he loves the Giro. On wearing the maglia rosa: “I would love to … but we have Tyler [Farrar], too, who we’d like to get in the pink.”

Footon-Servetto take my glamorous photographic assistance by surprise, if not shock. Their kit isn’t as bad as I’d been led to believe, but with the lights glaring down, through the viewfinder it looks, apparently, like they had forgotten to get dressed! Eros Capecchi, the breakaway specialist, is their top guy and gets the face time with the lovelies.

Next up is Team Milram, led by Linus Gerdemann. Now I’ve never met the rejuvenated German, and we had to laugh … it’s definitely a ‘one expression fits all’ day for Linus. Happy, sad, angry, distraught, confused, outraged, chilled … it looks like he just has the same slightly dazed look on his face. The Giro can do that to you!

Caisse d’ Epargne are on, and the neatly-suited Neil Stephens is in the DS role for them. Star man on the road is definitely Ed Hood’s favorite, Marzio Bruseghin. He might not have won much in his long career, but he always puts in a ride on the Corsa Rosa.

Team Sky get a surprisingly warm reception with the scholarly Michael Barry leading the way. The format for all the teams is the same. Gorgeous model parades in at the head of affairs, followed by eight team members, the DSs and then a younger model in team kit comes on with the team leader.

Bradley Wiggins is the chief on the road for Sky in this Giro, and he fairly drags his Pinarello down the steps and along the stage with ‘devil-may-care’ nonchalance. Brad, knowing his missus will probably be tweeting about it, has the good grace and manners to cover his eyes as he signs his name on the shirt. How will the Giro go for Brad asks the exquisite Yolanthe Cabau van Kasbergen?

“Dunno really … we haven’t gone through the game plan yet,” deadpans Wiggo. “It’s three weeks. I don’t even know what we’re doing tomorrow yet!”

Yolanthe is a peach. She hands the magic marker to Anders Lund of Team SaxoBank who promptly tries to sign her instead! The Saxo boys are minus Bjarne Riis, who’s off trying to sign sponsorship deals and they’re also minus the Schlecks, Cancellara and Voigt. They do have Richie Porte and Gustav Larsson for the TTs and Chris Anker Sorensen might come into form after his collarbone break, but otherwise: “We’ll pick one stage and go for it full gas.”

Andre Greipel breaks the steps as he … literally … hits the stage. Adam Hansen is hiding second from the right of his HTC-Columbia team line-up snapping his own record of events. “I’m really happy with the season so far and that’s how I hope to keep going in the Giro,” says Andre the Giant.

The years don’t really seem to have affected Stefano Garzelli too much. The Acqua & Sapone boss looks trim and determined, and gets a fine reception from the gathering.

Then we have the first big test of the clap-o-meter. How will the audience react when Astana come into view? To loud applause and a few very vocal roars of encouragement, it’s Alexandre Vinokourov. He’s divided fans around the world since his comeback, but wins at the Giro del Trentino and Liege-Bastogne-Liege show the Kazakh hero is back in business. Can he win?

“Aaah … why not? For me, if I win some stages and finish on the podium, it’s a very good result.”

Another popular figure is Carlos Sastre. Quite where Carlos actually finished in the 2009 Giro is open to speculation given that Di Luca’s been busted and Pellizotti’s now facing the chop. Sastre has a bit of a flirt with the hostesses. “There are plenty of mountains in this Giro … just none in Holland!” they tease. Carlos fires back: “I think this is a really hard Giro d’ Italia. It’s going to be stressful from the beginning … but the team will help me,” before pinpointing the last week’s stages to Zoncalan, Plan des Corones and over the Gavia as the key days. “All those stages are important.”

It’s great to see Robbie McEwen back in the big time after an injury-wrecked couple of seasons, and I might put a few Euros on the pocket rocket to win a stage or two in the opening week for Katusha.

Fillipo Pozzato looks every inch the successor to those Italian legends of old. There’s big cheers for him as he namechecks Mario Cipollini, the last rider to win a Giro stage in the national champion’s jersey. Of course, they didn’t invite Simeoni when he was wearing it, which reduced the odds a little. Still, he gives us a lesson in male styling, and the Katusha model has more than stars in her eyes when Pippo gets busy with his pen.

Lampre send out Damiano Cunego with the team which is a nice touch – Gilberto Simoni gets the limelight as he starts his fifteenth and final Giro. My Italian’s not great but I’m pretty sure he said the team would be combative and that it was a Giro for adventure, and that he wanted to win to close his career in style. If he makes it to Verona, he’ll get a bigger cheer than the winner.

Talking of cheers, home favorites Rabobank hit the stage to a raucous reception. Bauke Mollema opts to the take the bike for a precarious spin around the hostesses and our hearts are in our mouths before he comes to a halt. “It’s beautiful to be here in Amsterdam!”

Penultimate team out is Liquigas, and the clap-o-meter tells us that Ivan Basso has been forgiven. It’s a warm welcome for the 2006 champion given his past alleged misdeeds, but can he defend home honour against the foreign challengers? “It’s an important moment in our season … we’ll do the best we can.”

Last but by no means least, it’s the guy with number 1 on his back, world champion Cadel Evans. Basso is still being interviewed stageside by Italian TV, as the cheer goes up for what seems to be the most popular rider of the night.

Does Cadel remember the day he blew up beyond all belief, losing the Maglia Rosa in 2002? “Unfortunately, yes, I do remember some of it!”

He’s starting with numero uno on his shirt, but will he hold that position when the race is run? “I don’t know if I deserve the number 1 … if I do end up with that number in Verona, I’ll be very happy.”

And that was that, a quick farewell from the hostesses, sadly, and they were off. The auditorium couldn’t have emptied faster supposing Yolanthe had just stripped down to her undies out in the street!

On the way out to find a tram, we bumped into Federico Meda, who’s press officer on the Giro. He knows ‘The Pez’ very well, but it was the first time we’d got to say ‘Ciao!’

The big show starts in Amsterdam’s Museumplein tomorrow afternoon, not at 13.00 CET or even 13.30 CET, but at a very Dutch, very precise 13.55 CET when Milram’s Matthias Russ rolls down the start ramp in the opening time trial. We’ll be there to keep you posted on all the shenanigans.

Ciao, or even Tot ziens, from the Giro!