Roadside St. 9: “Martin, let’s check out the Rough Guide and see what it says about the towns on the stage route today.” There’s not much to draw you to the territory immediately north of Naples. The towns just outside the city are collectively known as the ‘Triangle of Death’ for their Camorra connections and make up a bleak combination of poor housing and industrial messiness.’ ‘Hmmm, think we might do the start and finish but skip the bit in the middle?’ 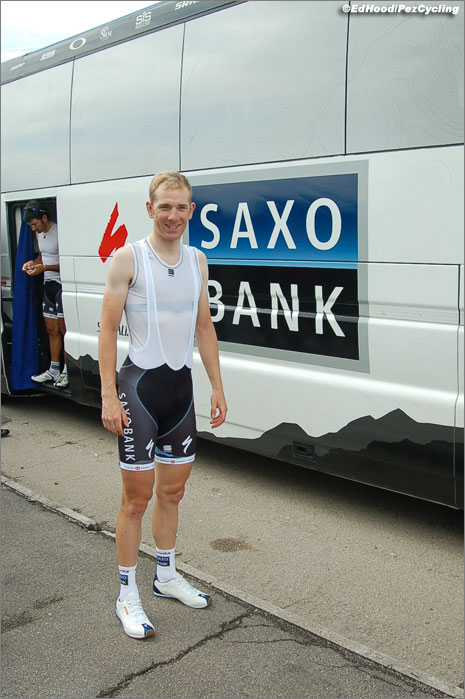 First on the hit list was to catch Michael Morkov at the Saxo Bank bus, we snapped him in trainers and vest; ‘I’ve no clothes on!’ he joked.

Start time was pressing due to our having had the usual swearing session at the Italian road signage, so we agreed to talk at the finish. 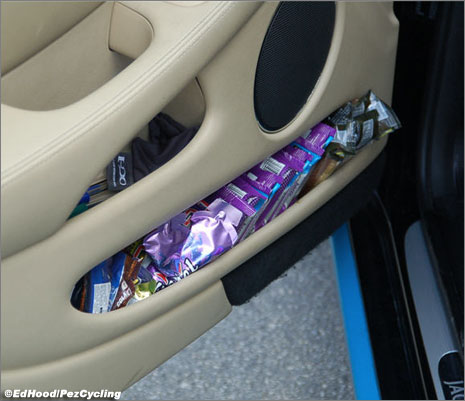 But we took time to snap the reason why Sky run those expensive Jaguar team cars – look at the energy bars you can get in those door pockets! 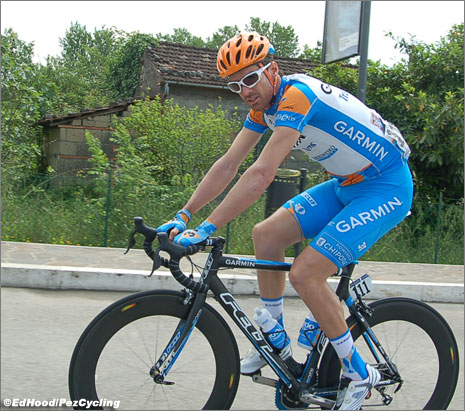 En route to the start we passed David Millar, looking a little weary but having a smile and a ‘how are you?’ for us. 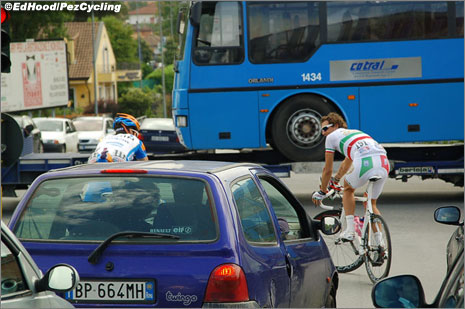 He caught up Pippo at the lights and they chatted as they waited on the signals going green – please note that two of the worlds best riders do not jump traffic lights!

The sign on – noise, fans, colour and a beautiful girl intro-ing the riders, she gives the first name; ‘Filippo… ‘Pozzato ! the crowd finish the name for her.

Cunego is very popular and all of the riders are aware of their responsibilities as far as hand shakes and autographs go. 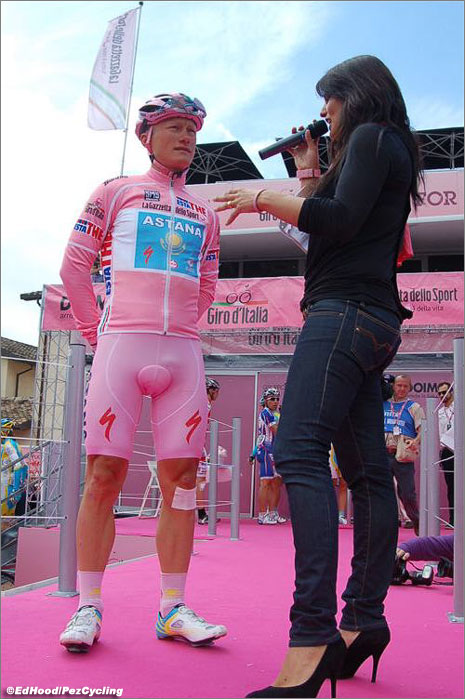 And there’s Vino; sorry to disappoint but there’s no booing or cries of ‘dirty Kazakh!’ just warm applause and cheers. 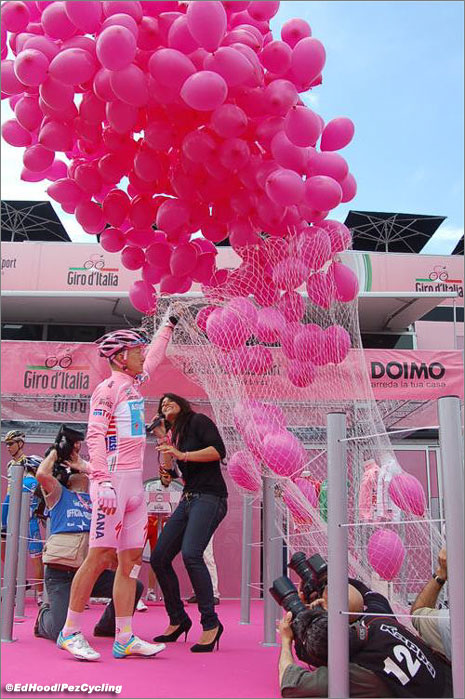 His Italian isn’t the best but he struggles through the interview and helps unleash the pink balloons.

Dan Lloyd reckons that Vino will find the mega climbs of the last week just too much. But we shouldn’t forget that the man is hugely experienced, he was winning the Four Days of Dunkirk in 1998 and has a Grand Tour, the Vuelta from 2006 on his palmares. 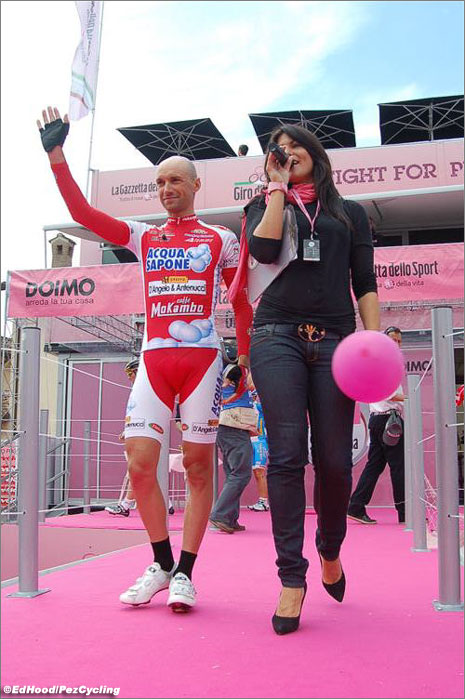 Garzelli is still popular and polished, he’s had plenty practice – a pro since 1997 when he was 9th in the Giro. 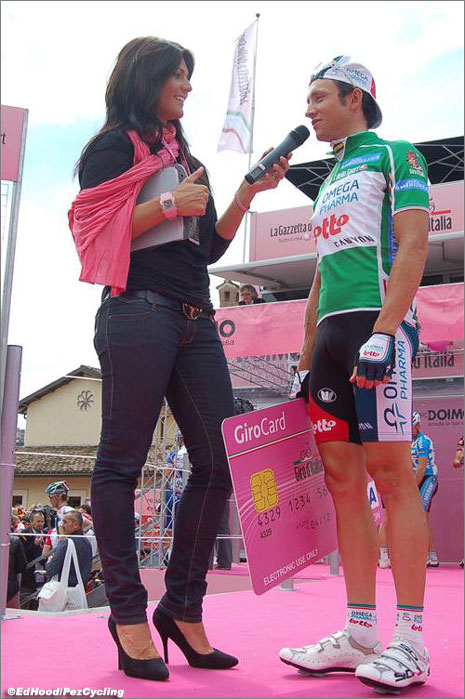 Matt Lloyd is all smiles – why wouldn’t he be? A stage win and the montagna jersey on his back. ‘There are no big mountains in today or tomorrow’s stages for you to ride up, will you go to the beach?’ says the beauty with the microphone. ‘I’ll take it tranquillo’ laughs the Aussie. 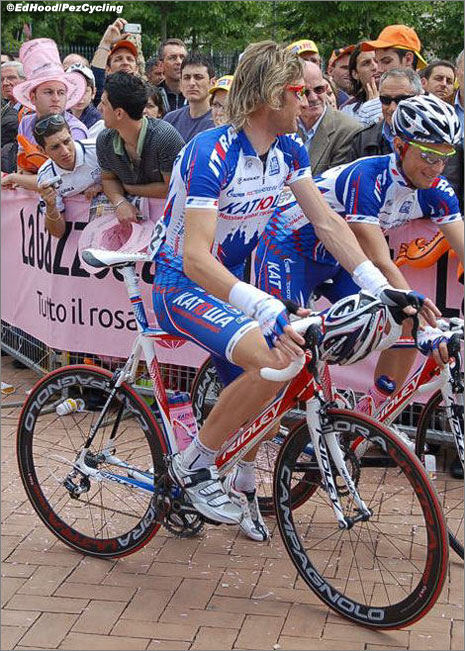 Karpets has shed his beard but still has the flowing locks – he’s cool. 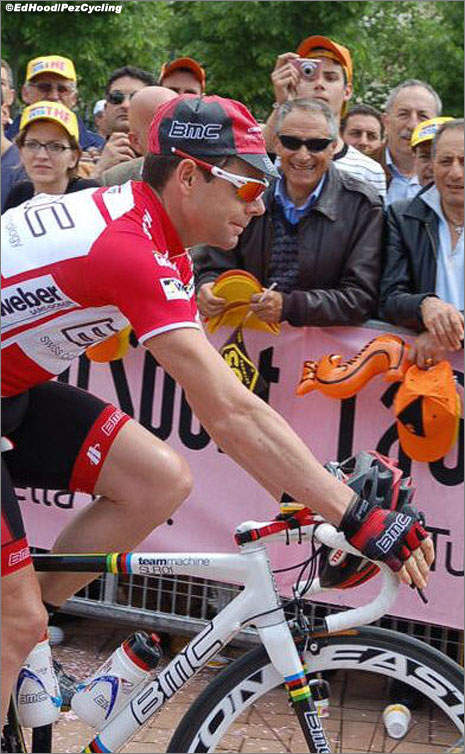 And there’s Cadel – I dare say he smiles sometimes; no rainbow on his chest though, he has a one point lead over Vino in the ‘clasiffica generale punti’ and wears ciclamino. 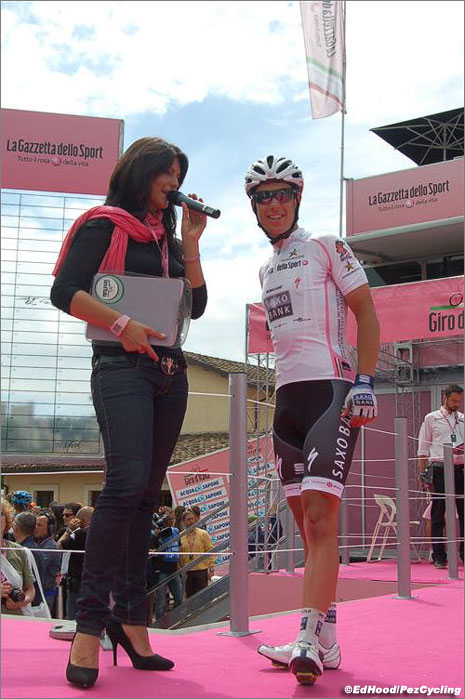 During live coverage of the Netherlands stage where Cadel was losing his jersey, Eurosport did a ‘split screen’ showing the same thing happening to him in 2002 – good production. 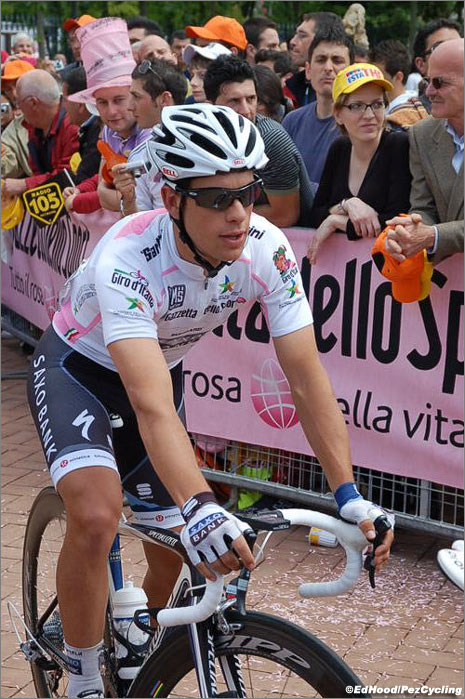 ‘Hey Richie!’ I shout and the little Tasmanian Devil gives us a smile, resplendent in the white jersey of ‘giovani’ – best young rider. 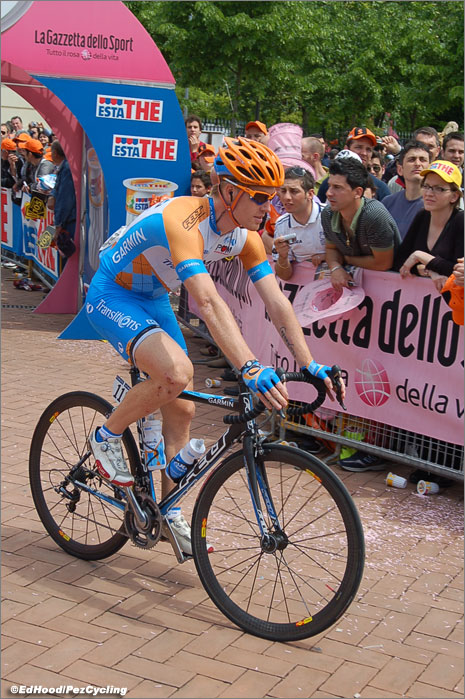 Garmin’s sprint king, Tyler Farrar stands out, a big man amongst the frail husks of humanity that are the climbers. 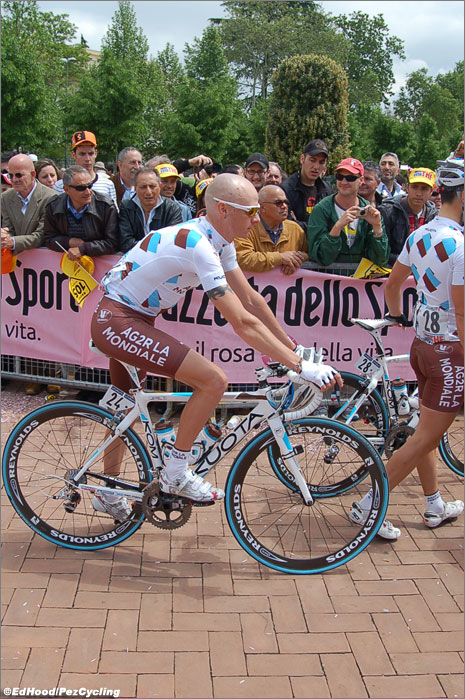 John Gadret, for example, skinny as a twig, with his shaved head giving him an other wordly look surrounded by quiffs and heavy gel work. A year or two ago he was up sparring with the Cunegos, Simonis, Bassos and Garzellis of this world, in the Giro, before he crashed out. He looked very effective on Terminillo, yesterday – there’s a mountains stage win in him, on the right day. And he’s not a bad cyclo-cross rider, either. 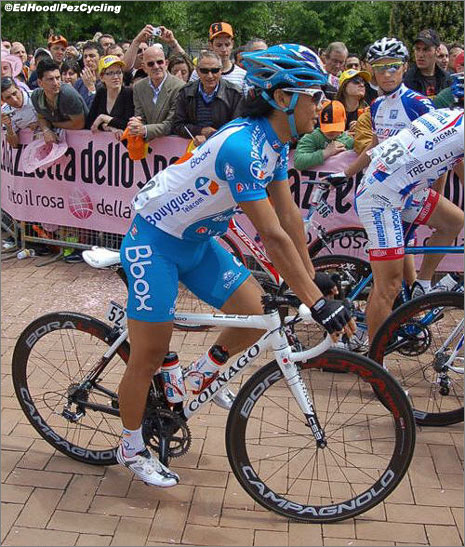 Arashiro will be happy that pesky Beppu isn’t here to prevent him from being best Japanese rider, like he did in le Tour last year. The BBox man has already lit things up in this Giro with his stage five exploits. 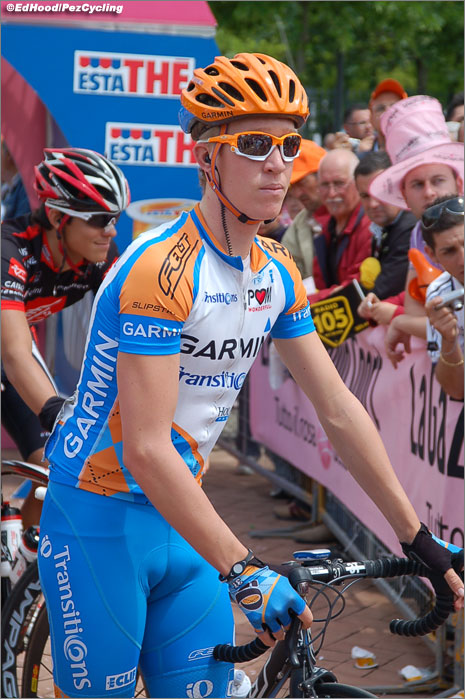 Cameron Meyer looks a little lost, not the Colossus that dominated the Track Worlds; Martin holds his bike as the Garmin man ascends the stage to sign on.

Whilst he’s tinkering with Cam’s Felt, big Steve Cummings appears; ‘all right, Steve? was that a skinsuit we saw you in on Terminillo, yesterday?’

‘Yes, Wiggo and I always wear them, we have pockets in then and they’re more comfortable – why wouldn’t you?’

Strade bianche? ‘I didn’t mind it, I like the Giro for that, it’s quirky.’

But time is ticking by and it’s nearly roll out; whistles, horns, police pushing the ‘civilian’ photographers back, riders needing a last minute coffee – or pee.

Finish town interviews with Liquigas PR Paolo Barbieri and Michael Morkov – no rest for the wicked.