Roadside St. 15: Five climbs, 229kilometres, the third big day in a row, hot and humid at the start and snow over the highest passes. If you are a rider, there wasn’t a lot to look forward to for the next 7 hours. For those of us watching, however, it had all the makings of the toughest and most exciting day of the 2011 race.

For the third day in a row I could be writing about SSFF (Sunburned at the Start, Frozen at the Finish). It was a hot one again at the partenza and for the first few hours of racing, but I can happily report I didn’t get rained on at the finish today. Not because it didn’t rain (it did!) or because it wasn’t freezing (it was!) but simply because we decided to hang out on the early climbs and not go to the finish in Gardeccia. Unluckily for the riders left in the race, they didn’t have that option.

With the area around Conegliano famous for its wine production, what better place to hold the sign on at the start, than in the middle of a vineyard? 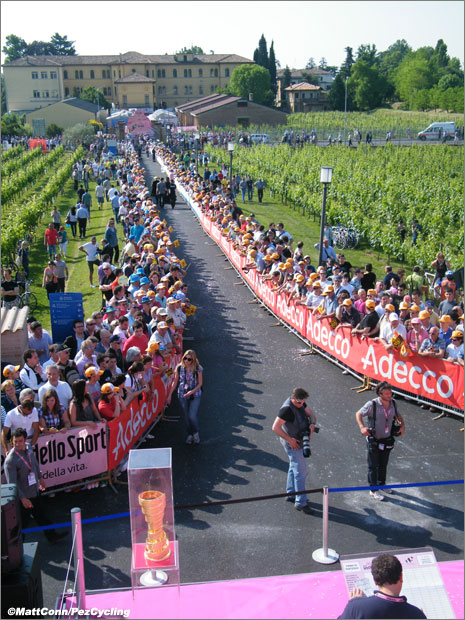 An Early Start
After yesterday’s super hard stage, followed by a cold ride down the hill to the team buses and then a long drive down the mountain to the hotel, what could be better for the tired riders, than the news today’s 229km stage from Conegliano to Gardeccia/Val di Fassa, was to start 25minutes earlier than scheduled? The roll out for today’s 5 climb stage was a bright and early 10.00am. 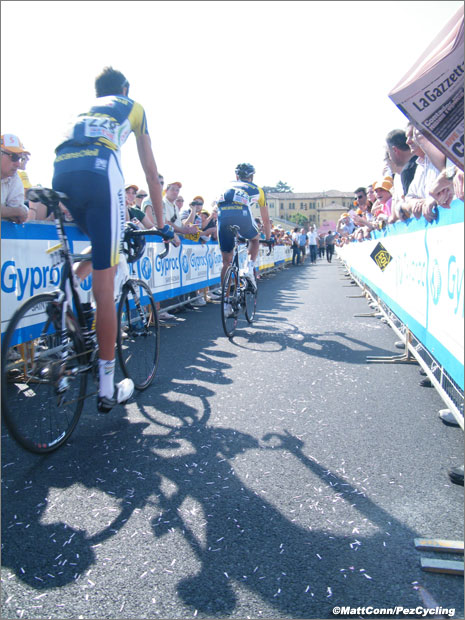 Someone has to be first (Saxo Bank pretty much have “last to the sign on” sewn up) and it was the riders from Dutch squad Vacansoleil-DCM who picked their way through the local invitees and everyone else with a pass, to go and sign on for the day’s stage.

Matteo Carrara had dropped from 9th to 13th on the Zoncolan stage, but was still sufficiently highly placed to play the “Im not chasing or working” game, if a member of the team made it into the early breakaway. The added bonus on offer for stage 15 (aside from the chance of being first across the line) was the opportunity to be first over the Cima Coppi climb after 178km.

Coming down off the stage from signing on, Johnny Hoogerland was walking awkwardly and looked to be in pain on the steps. In complete contrast, fast-man Alberto Ongarato looked cheery and fresh. Not exactly the the kind of look you would expect on the face of a sprinter, on a day with several thousand metres of climbing to be done. 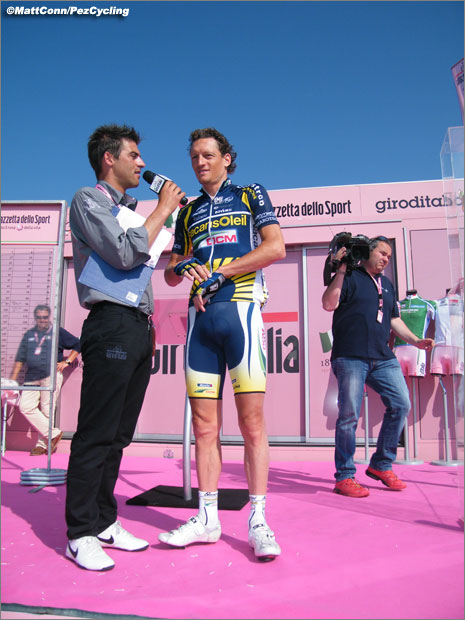 I asked Ongarato if this, being his last Giro d’Italia, made it special or changed the way that he looked at stages like today?

“First or last Giro, you still have to ride every stage and something like that doesn’t really matter while you are on the road.”

Ongarato told us that his objective for the day would be just to make sure he made the elimination time and to stay in the race to complete the final week. 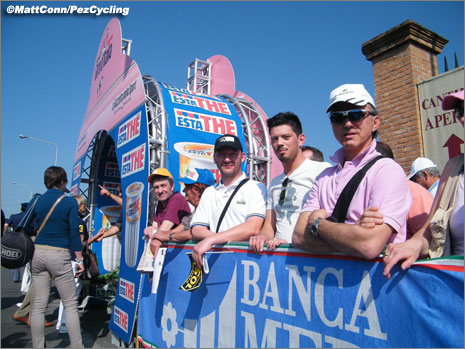 Local fans with a prime spot to see the riders arrive for the sign on.

As yesterday’s stage featured the climb of the Zoncolan and today’s had several times that level of pain, the bike set-ups for the riders was unchanged from the major overhaul they received two nights ago. Pez regular, Dario David Cioni’s spare ride was in prime position on the outside of the team car, as befits the second best placed GC rider on the team. 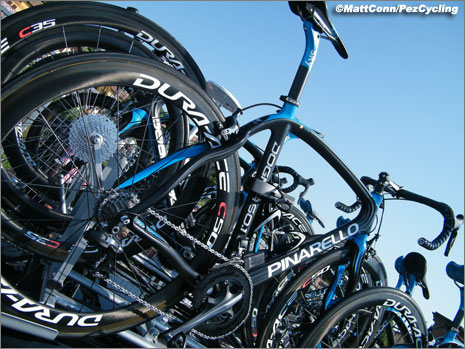 Cioni started the day in 35th place overall, just over half an hour behind Alberto Contador, while the best placed rider on the British team is Thomas Lovkvist in 21st at 13m 24s. 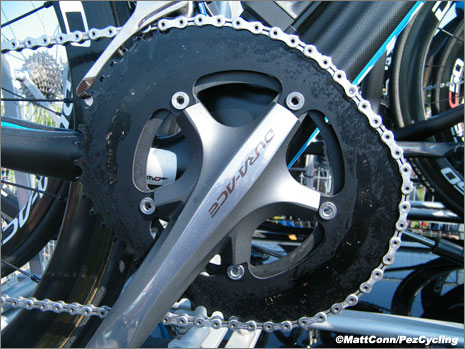 A close-up look at the bikes reveals some handy work with a magic marker to hide the fact that the elliptical chainrings possibly don’t fit in with the commercial deal the team has for their groupsets.

As more and more riders started to file in and the tight space that had been allocated to the team cars today started to get even tighter with people, cars and bikes, we decided that a dash to the car to ensure we were ahead of the race, was the most sensible option. 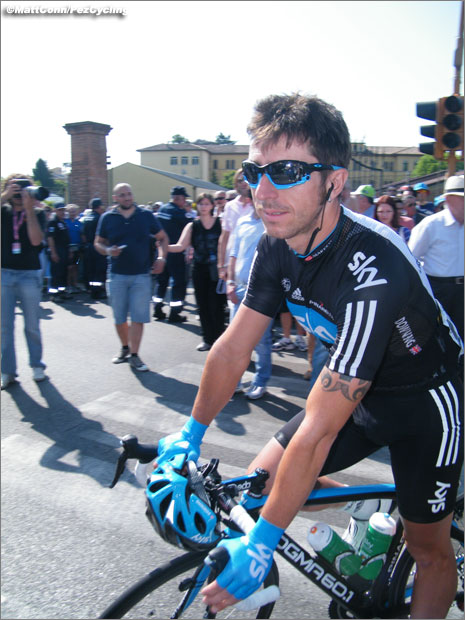 Brit Russel Downing was off to sign on as we were off to wait for the riders at Piancavallo.

Climbing Climbing And More Climbing
As well as a mountain finish at nearly 2000m, today’s 15th stage features the 2011 Cima Coppi. The title is awarded every year to the highest peak to feature in that edition of the Giro d’Italia. This year, the climb is the Passo Giau which will see the riders pass the line at 2236m. The Cima Coppi prize was first awarded back in in 1965 to the first rider to cross the highest point of the race, which that year was the Stelvio. The winner then was Graziano Battistini, who, according to the race book, (and I quote) “cutted the finish line carrying on hand the bike along the last 300 metres of road that had recently been invaded by an avalanche.”

After hail yesterday, we can only hope there will be no avalanche invasions today. 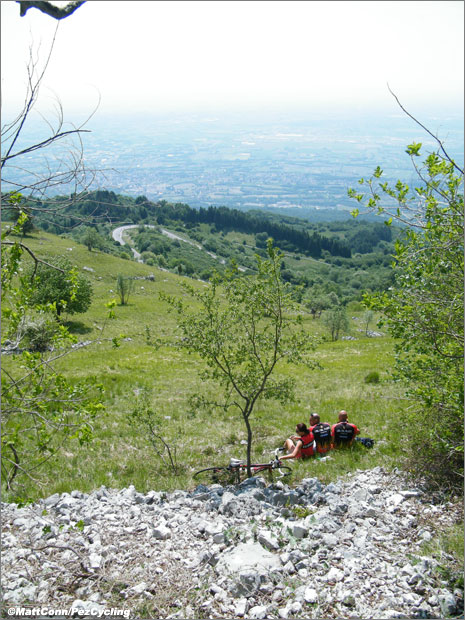 Rather lower than the Cima Coppi, this is the view back down the hill from the opening climb to Piancavallo.

The first climb of the day, Piancavallo, would bring the rider up above the flat plains near Aviano, which is home to a very large US community thanks to the presence of the NATO airbase that is clearly visible from the climb, but apparently appears as farmland if you look on Google Earth.

We weren’t a long way ahead of the race today but there were still plenty of riders making their way up the hill for a good vantage point as we drove the first part of the 14km climb. With parts as steep as 14% our plan was to get up above the hairpin bends so that we had a clear view of the riders approaching. 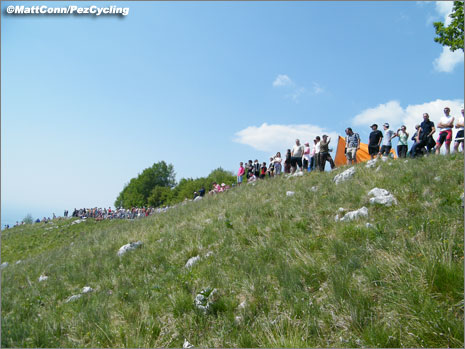 Plenty of fans had ridden up to. Most will ride back down, rather than follow on to the finish in Gardeccia, some 190km along the road.

By just a few kilometres up the climb, there were already two groups away. The first group was made up of Sella, Hoogerland (seems that leg wasn’t as bad as we thought) Aramendia, Kuschynski, Seeldrayers and Popovych. 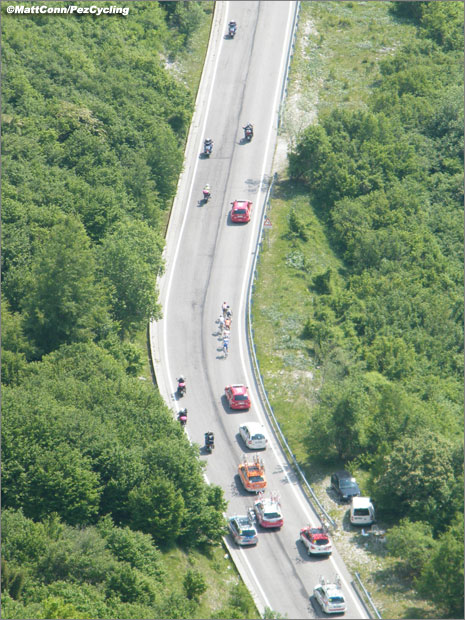 The switchbacks of the climb as well as our height, allowed us to track the approach of the first group, the chasing group and then later, the peloton. By 5km into the climb, there were already riders doing it tough in the cars and they were still visible far below, after the first group had passed us by. It was going to be a long day for some. 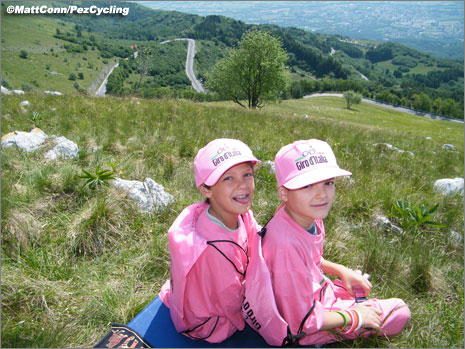 Having been fitted out in the Giro’s finest, Faier (7) and Garison (8) were happy to pose for the Pez cameras.

With the leaders about to pass by our point near the top, the peloton was making their way through the long steep curves below. 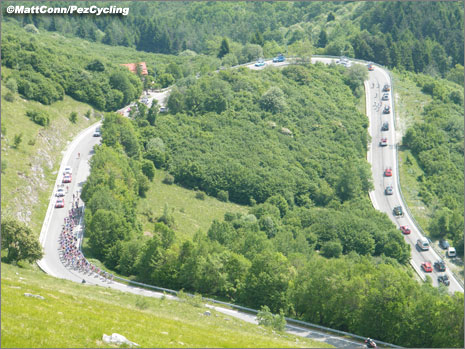 Emanuelle Sella led Yaroslav Popovych through at a steady tempo. Sella likely had much more in the tank, but there was a long way to go and he would need the help of the others to have any chance of making the finish ahed of the GC riders. 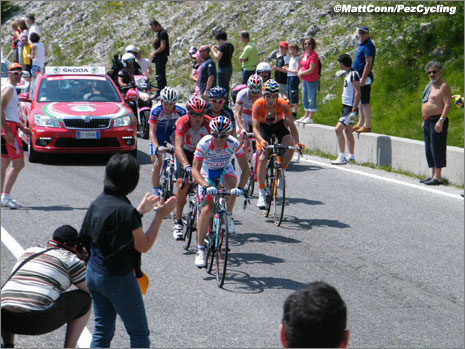 The chase group had some big names, including Sastre, Garzelli, Di Luca, Weening and Tschopp along with Pirazzi, Nieve, Losada, Pasamontes, Petrov, and Deignan. 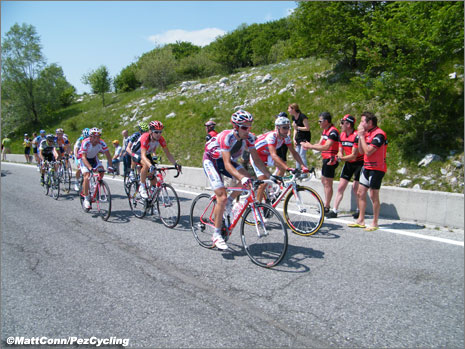 Tschopp and Garzelli were both on the hunt to add a second Cima Coppi prize to their trophy cabinet, but with so far still to go, it was going to take a huge ride by anyone in this or the front group, to hang on until the end.

On the way to pick out our vantage point, we were stopped by some Pez fans who wanted to say “Hi”. The guys had ridden up to watch the race and depending upon whether you look over their shoulders, or look on Google Maps, you may or may not be able to see where they work on the plain below. 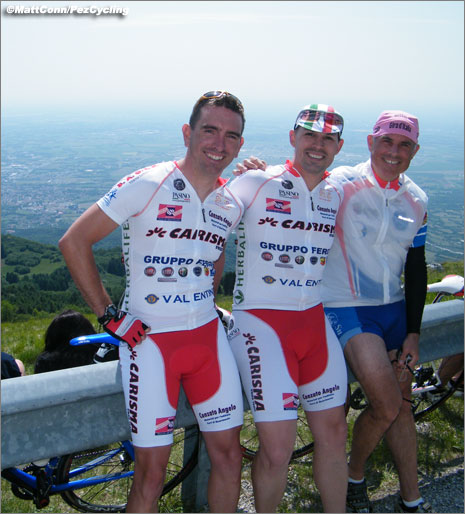 Clayton Cole (Colorado), David Golden (Milwauke) and James McCord (San Diego) made the effort to ride up the climb to see the Giro as it passed close to their European home.

Having been part of the day’s early break, Olivier Kaisen was dropped early on the climb and was fighting on behind the second group of Garzelli and Nieve. Right behind Kaisen, putting in a strong acceleration to catch up as he passed by us, was his Omega Pharma Lotto team mate, Jan Bakelandts. 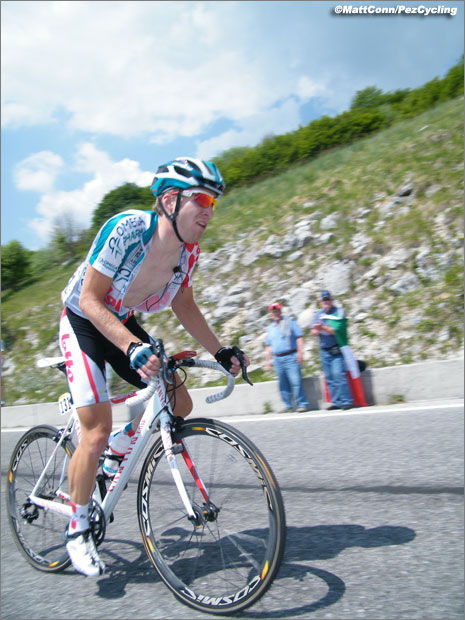 It is still amazing to watch how easily riders like Contador climb sections like this. The maglia rosa came past on the outside of the group, seemingly doing it easy, while further back down the group, things were proving to be more of a challenge for those whose legs had yet to recover from yesterday. 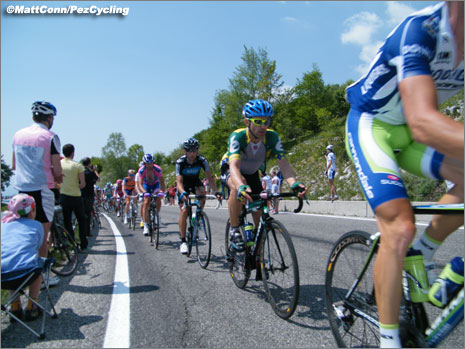 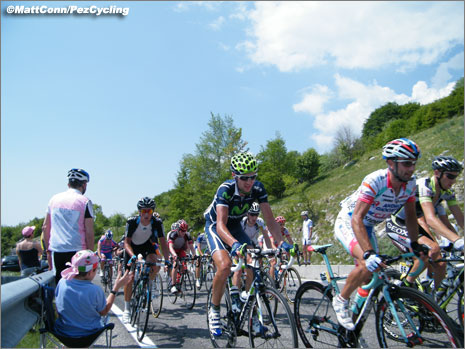 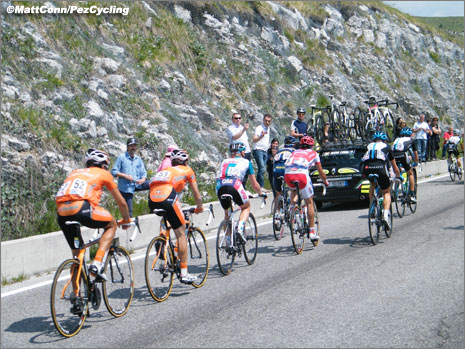 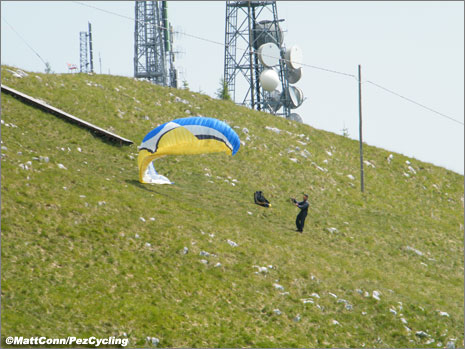 There were still some who had a bit more riding to do before they could even say they had made it to the top. 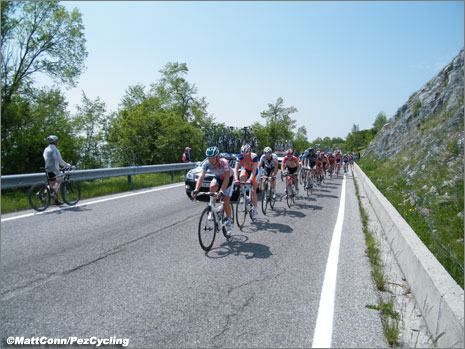 The last group on the road came past us, some eight minutes behind the race leaders, with Quickstep’s Italian rider David Malacarne, fittingly being the final rider to pass us on our brief stint at the 2011 Giro d’Italia. 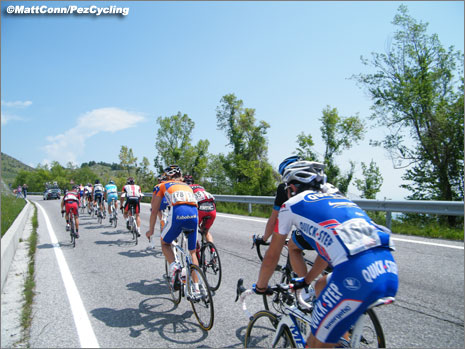 Ciao Ciao!
That was all we had time to catch on what would be a long travel day to get home from our short trip to the Giro.

Word on the street is that The Pez found his luggage, made it to meet up with Thomson Tours, slept in a bed and actually rode a bike today!

So, with the knowledge that from tomorrow, the Boss will be taking over Roadside reporting, I will leave you with a Pestes inspired final photo. What better way to finish off the Giro than a Pizza Diavola as we headed for home? 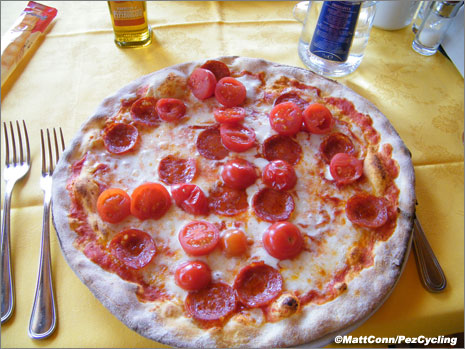 A big thanks to Marco for allowing me to sleep while he drove to the hotels and to Jered for editing all of the pictures for my stories (do I actually do anything? I hear you ask!).

My biggest Thank You goes out to everyone for reading and especially to all of the Pez fans who stopped us along the road in the past three days. It was a pleasure, and we hope to see you all again soon.