Roadside St.21: By now you’ve heard the news and read the race reports – and for me it’s still sinking in – and I wonder what it’s like to be Ryder Hesjedal this morning. Waking up as winner of the Giro d’Italia, a major Grand Tour, the first winner from his country – and while the race was three weeks long – so much happened over 34 minutes yesterday in Milan.

I was there to see it, and what’s still sinking in for me as a Canadian, is that I witnessed a piece of history that is as is personal as only watching your home team win can be. 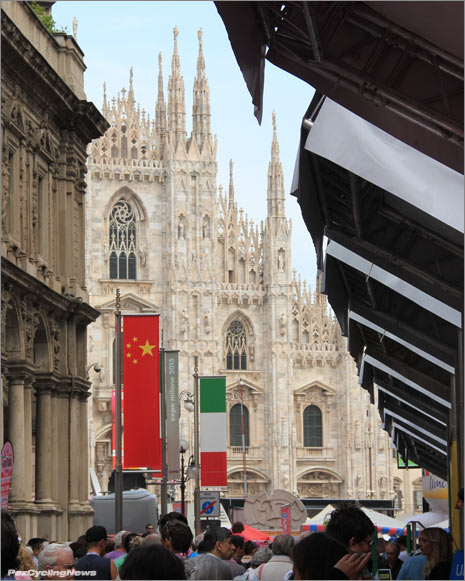 The beauty of Roadside coverage, is that you can often approach the day without too much of a set plan, because no good adventure ever goes according to plan, so you just gotta be ready for whatever comes your way. And while most of the regular journos were hunkered down in the subterranean press room, tapping out the news of the day to rest of the cycling world, I was on the street, and headed to the startline as my first stop.

The first riders were off at about 1:55PM local time, and the crowds were much bigger than last year – even this early in the day. 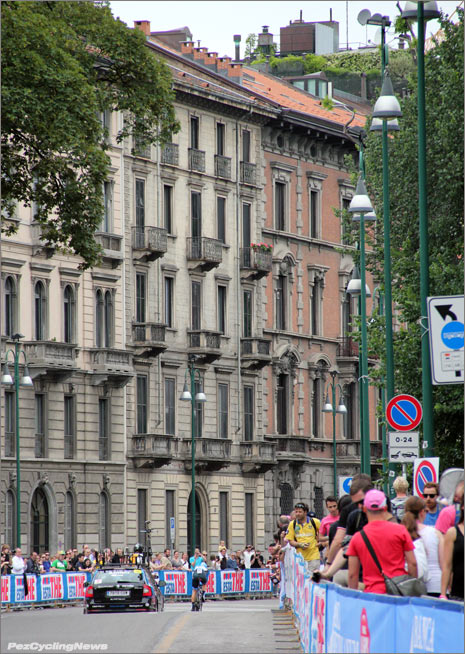 Alex Rasmussen started 6th on the day – meaning he was right near the end on gc, but went on to take 4th place on the stage – not a bad way to end the race. 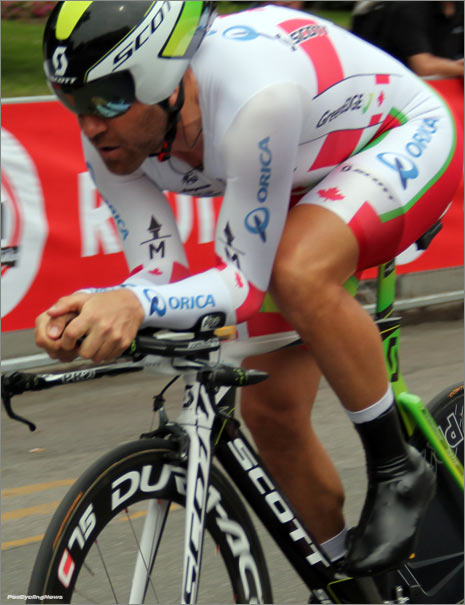 Canadian TT champ Svein Tuft blasted through shortly after, and rode himself to 9th place on the stage. 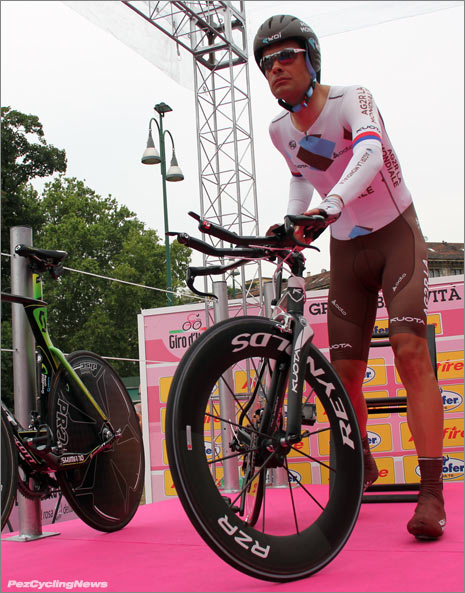 Waiting your turn in the starthouse is a nervous affair. I watched a few of the early starters climb the stairs and sit uncomfortably in folding wooden chairs as they waited the final couple of minutes before walking their bikes into the start house. This AG2R rider was fully focused. 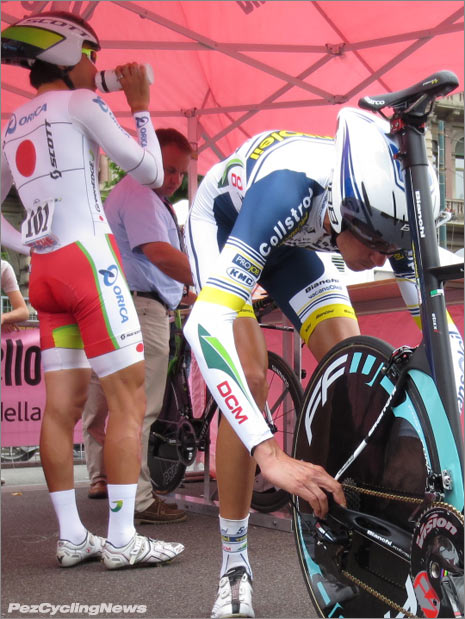 Just before climbing into the start house, riders’ bikes are checked by the UCI officials. Here Mirko Selvagi gives his wheel one last check while Fumi Beppu gets his bike the UCI thumbs up.

Is was shortly after this that a security guy booted me out – apparently my press creds were not sufficient to be hanging around in here, so it was down to the team busses for a look. 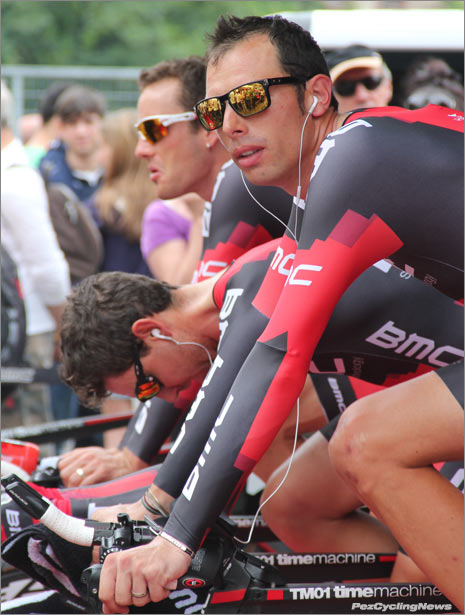 The Team BMC had a pretty good sized crowd around as several of their riders were warming up together. Former World Champ Alessandro Ballan kept tabs on the tifosi alongside two of his team mates. 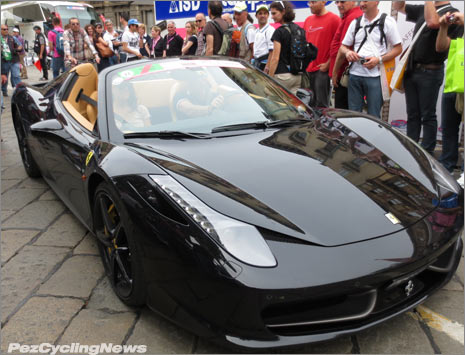 This is also where the case cars line up to follow their riders, and you see a full variety of vehicles coming through, but I’d never seen one quite this cool. Not sure where the spare wheels are gonna go… 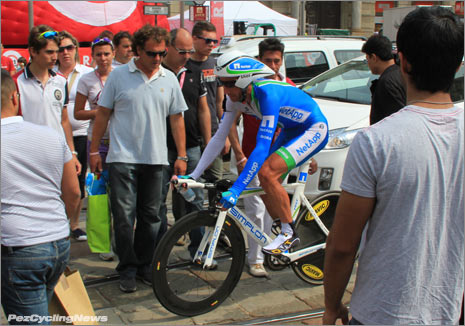 While Milan hosted a very similar TT last year, the crowds seemed way bigger to me this time. Maybe it was because of the competition not being decided until today, versus last year’s already known outcome, but the whole area around the Duomo and all the way down to the start line was jammed with people. Riders finishing their rides and finding their way back to the team buses had to play along with the street life, as sharing the road was the only way to get through.

But now it was time to make my way to the finish area so I could see the top guys do their full runs. After fighting my way through even thicker crowds, I found my way into the media cage that always sits just beyond the finish line. 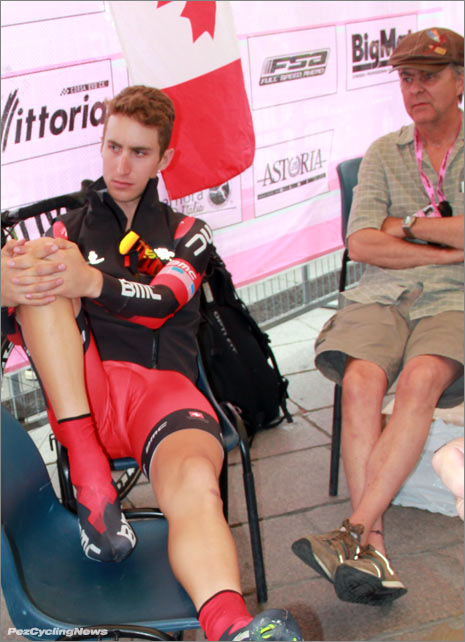 I was a little surprised to see Taylor Phinney watching the race here, but had a quick chat and asked about an interview in the coming days (he said sure thing…) I didn’t realize it at the time, but that’s Ryder Hesjedal’s dad on the right. Always nice to have some family support when you’re going for the big one. 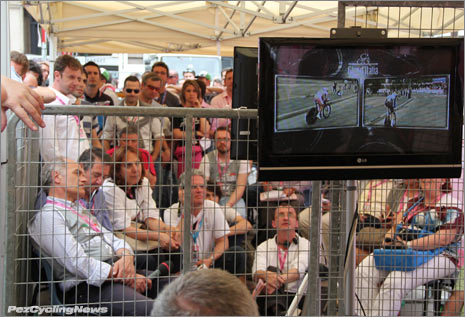 With both Ryder and Rodriguez on course, the tension was palpable, as all eyes were glued to the tv screens.

Jered and Ashley endured a real trial by fire on shooting their first grand tour, starting with the theft of their computers, backups, and clothing back on stage 4. Doing double duty shooting photos for RCS and covering the Roadside for PEZ in the final week just turned up the heat. But they made it to Milan – exhausted of course, and while the chaos of the day allowed for only a few minutes together, I was pleased I saw this opportunity to capture Jered in action – he’s a guy on the way up on the world of cycling photography. 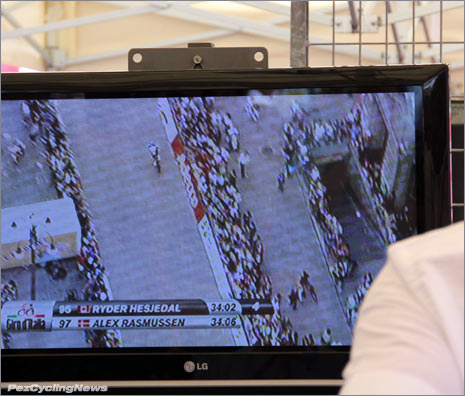 The minutes passed quickly – I could feel time speeding up and as Ryder crossed the line as winner, I knew it was about to get pretty crazy back here. For a few minutes the security held the press back, but I could see a few yards away that Ryder was already swamped by well wishers. I could barely see him through the throng, but I could follow his movement by the Canadian flag on the hockey stick he was holding. People were going bananas, and I’d never seen such a tightly packed crowd of media surround an athlete – even in Italy – this microfone, tv camera, recording device wielding mob shifted and flowed like it’s own entity.

Finally Ryder made it out and to the relative peace of doping control, so for us it was time for another jam to the front of the stage and the awards festivities. The Piazza del Duomo was packed, and I was happy to be on the inside of these barriers – fully aware of the coolness I was about to watch.

They wasted no time getting stage winner and huge crowd fave Marco Pinotti up there. The looks on peoples’ faces were genuine and clear and even stronger because with no stage tomorrow, the emotions were free to flow. 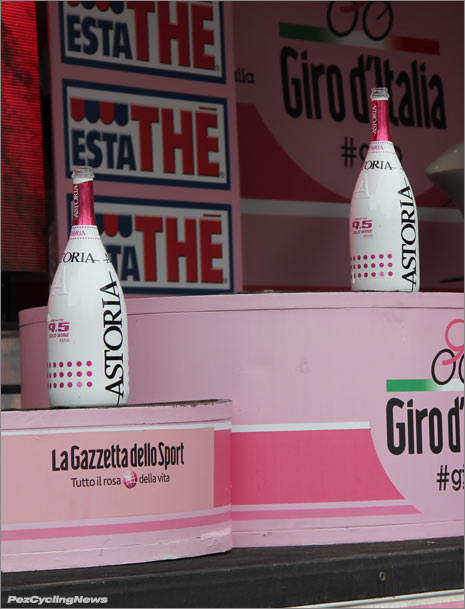 Next up one of the production girls brought the three big bottles of champagne, already opened – simply shake, and spray. 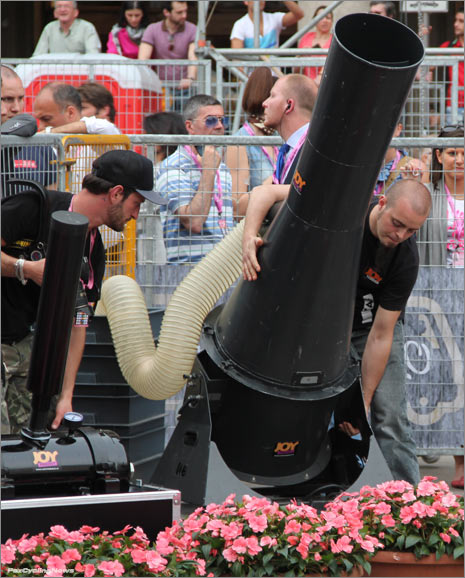 The pyro-technics boys make a last minute check of the confetti cannon seconds before the Giro podium winners appear. 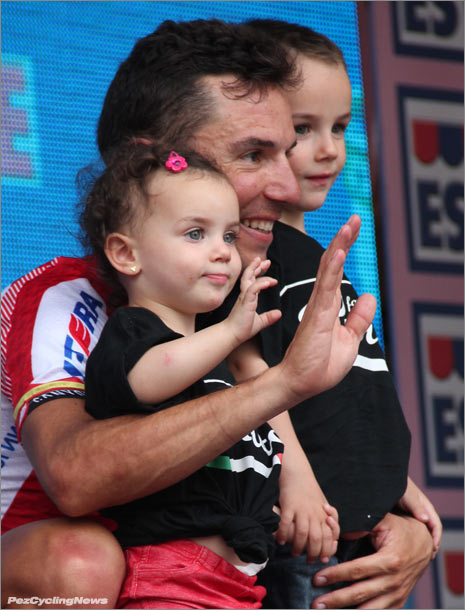 The Giro podium winners are presented in reverse order from 3rd to 1st, so after Tomas de Gendt came out, 2nd place finisher Joaquim Rodriguez walked through the stage opening with his two young children. My own kids are just a bit older, so I watched him intently, imaging how cool that must be to share with your kids – even if they have little, or no idea what’s going on. Clearly a moment for dad, but then what’s wrong with that? 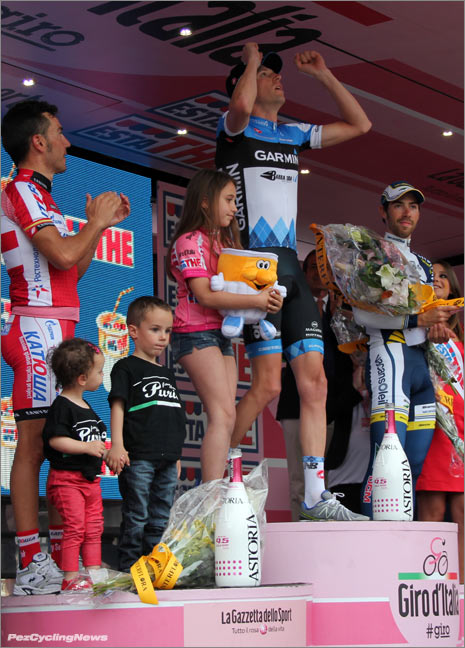 And then it was the moment we’d all waited for. Ryder strode out from the back and quickly climbed to his step atop the podium. For a guy who’s been criticized by Italian media for being “chilly”, there was no mistaking the happiness, joy, and sense of this fantastic accomplishment he was feeling. 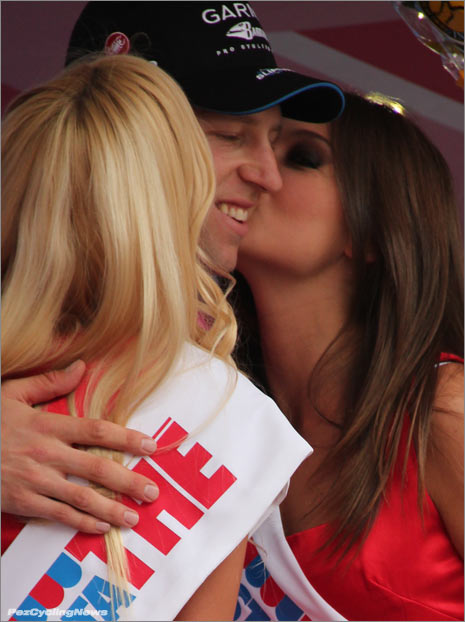 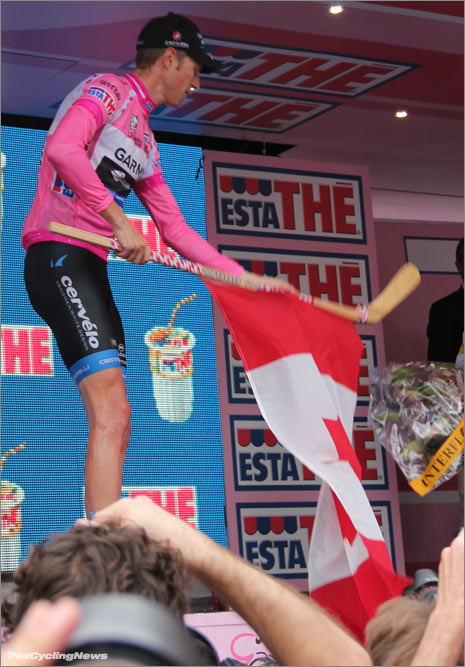 Someone handed up the hockey stick for a ceremonial slapshot, and then it was time for the trophy. 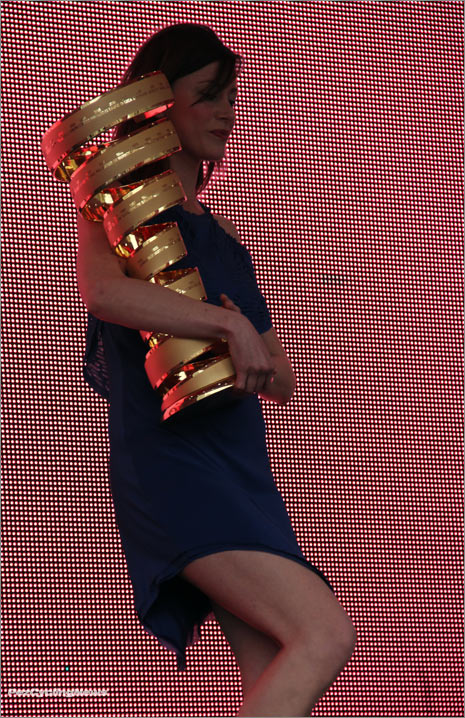 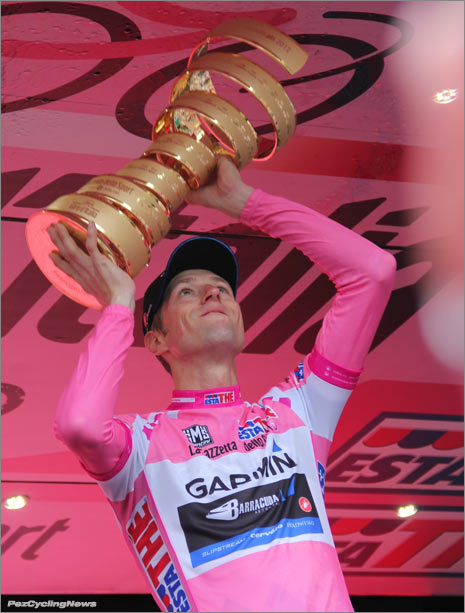 The look on Ryder’s face was fun to watch – he spent a long time studying the trophy, feeling the weight of it in his hands, looking at it… a look of complete awe mixed with satisfaction emanating from his eyes. 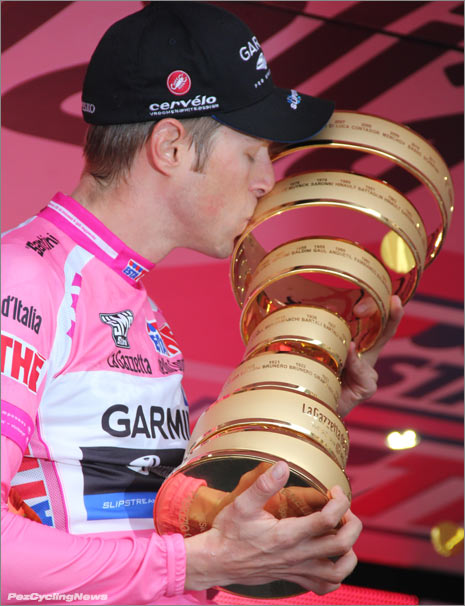 A few minutes later the trophy was doing the rounds backstage, as the Team Garmin staff and riders took pictures and enjoyed their success. A few minutes later I found myself face to face with team boss Jonathan Vaughters, our eyes locked.

He replied: “Thanks, thanks very much.” He was clearly pleased. 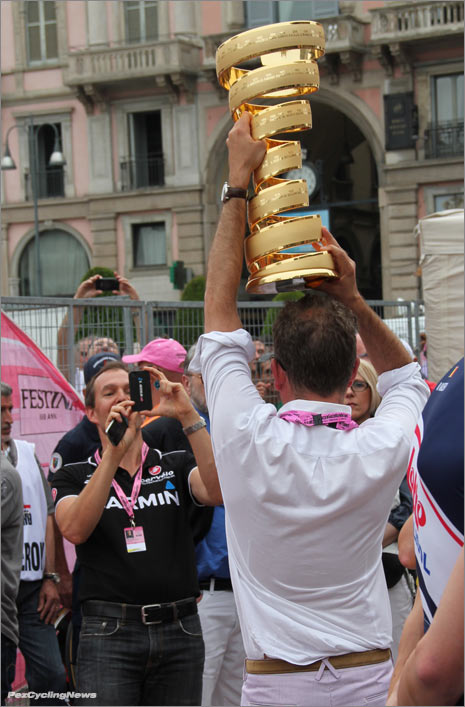 Back on stage some minor comedy ensued. Garmin-Barracuda had won the team prize, and the organizers needed them on stage to keep things flowing. The problem was that Ryder was occupied somewhere else, so about 5-6 of the riders went up and accepted the award. 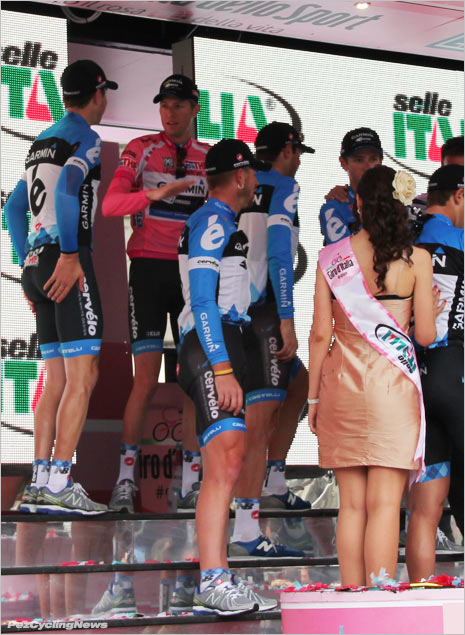 Just then, the stage screen slides open and out pops Ryder (“hey guys – what’s up?”). He took his time hugging and thanking each of his friends as they all soaked in the moment. 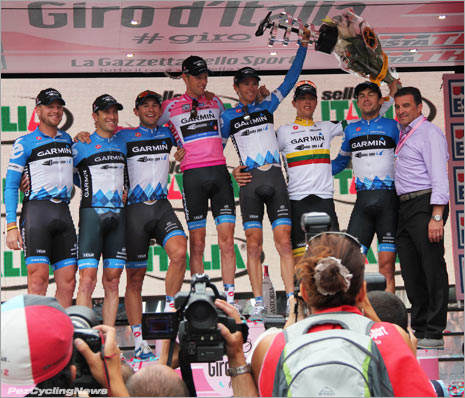 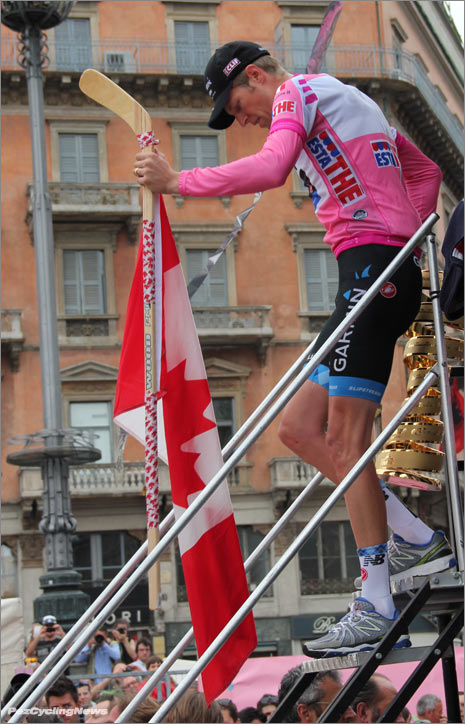 And with the awards ceremonies done, it was time to leave that stage, and enjoy more congrats and celebrating what’s just happened. 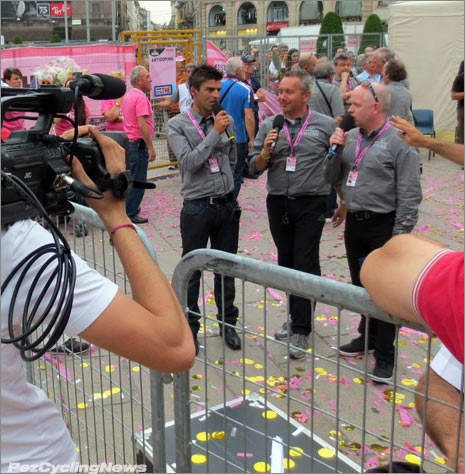 As things came to a close, I saw former Cycling TV announcer Anthony McCrossan also making history as the first ever English-speaking announcer to call the race action – in English – at several Giro stages. I’d always assumed the announcer who covered the on stage action at the after-race ceremonies was seated in a booth somewhere nearby. But when I took a second to take in my surroundings off to the stage side – I discovered a small crew doing all the mic-work right in front of my face. Including Anthony. I took this shot as they wrapped up the day’s proceedings, thanked everyone for coming and officially closed this stage, and this edition, of the Giro. Much hugging ensued.

Then I glanced back to the stage to see that it really was all over – in fact I was one of the very last out. As quickly as it happened, it was over. Funny how that’s exactly what it’s like watching a bike race from the roadside. 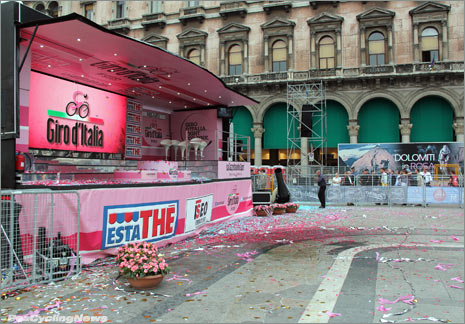 And with that I’ll say a huge thank you to all you readers for joining our 8th edition of Giro Roadside coverage, and an even bigger thanks for the men & women of the PEZ-Crew who made it all possible – Gord & Valerie for starting us off right in Denmark three weeks ago, Les & Alessandro for taking us through the first stages on Italian soil, Ed & Dave for the long stages and big slog from south of Rome all the way to the northwest corner finish in Cerevinia, Jered & Ashley for battling on through much adversity of the final week to capture the fantastic images as only they can, and finding internet and time to get the tales of their first grand tour posted each day, and of course Alastair and Dave who were the backbone of our daily race reports.

From here, a group of us will be meeting in Bormio for a few days riding, then meeting up with even more of the Crew in Lago di Garda for the second half of the week. It will be the largest ever gathering of PEZ-Crew, for the sloe purpose of riding our bikes, and a bit of celebrating 10 years of PEZ. Stay tuned for reports of our antics in the days ahead.

I need to get this posted, check out of the Milan hotel, pick up a car and make my way north. Next stop – Bormio!

Ciao and thanks for reading –
Richard Pestes