So the 2010 Giro is underway, and although I didn’t see every rider roll off the start ramp, I’m sure I’d have heard about it by now if one of them had mistaken it for a water feature and ended up in the drink. It was a great day of racing to kick off the 2010 Grand Tour season. PEZ was on the scene for every bit of the action.

The race start was pretty pink against a rainy, grey Amsterdam sky. Situated in the Museumplein, it was just round the corner from our hotel which meant an easier start to the day. Just roll out of bed, into the winter wooly hat (yes, it was that chilly) and off to the start to see what was happening.

As the team buses were arriving, we got some words of wisdom from Aussie legend Neil Stephens. Now in the driving seat for Caisse d’Epargne, he’s in charge of a relatively inexperienced Grand Tour team. What did he reckon for the day ahead?:

“The tram lines … they’ve done a good job of covering those up. I think that whoever came to approve the circuit did it on a nice sunny day. This circuit in the wet and in the dry … it’s quite different. It’s quite slippery. The main objective is to do well but not take any risks.” He wasn’t wrong; the champfured pavement edges were lethally slippy, and typing this in the Sala Stampa (press room) post-race, I’m amazed that the medical communique lists only two fallers: Pozzovivo and Canuti. 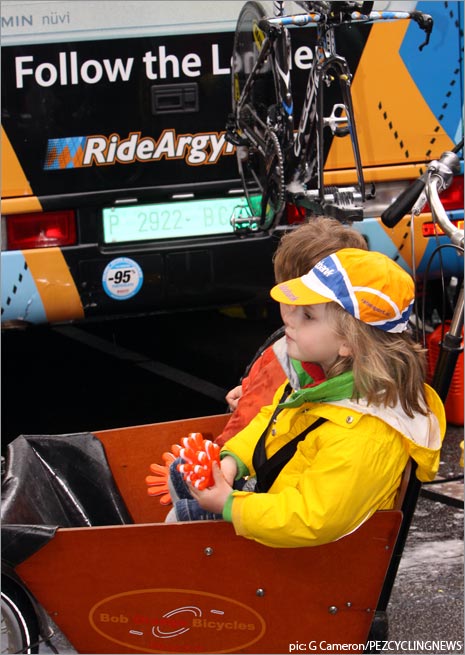 Some young locals are taking no transport chances, and opted to be chauffered in style. I reckon a barrow-bike is a safer option than a high-end TT bike for the tramlines and road furniture.

Michael Albasini, meanwhile, was most definitely making his own way around town, and even had the energy to tow his suitcase with him.

He wasn’t the only one either, but this young lady at least had someone to help her take the weight.

Things were starting to buzz around the team buses. Garmin-Transitions’ glorious Felts were being lovingly sprayed and polished, ready to carry David Millar to an eventual 7th on the day.

The BMC boys were working up a sweat under cover, and it would turn out to be a very good day for them. Maybe it was the advice they were receiving from the avuncular-looking owner Andy Rihs. I overheard him telling Michael Schдr that spikes or snow tyres might have helped navigate the corners and tram tracks.

Sky were going for maximum incremental gains today, which included placing a screen around two sides of the warm-up area, and going as far as to make Chris Sutton prepare in total darkness, a novel technique. Might catch on now that Wiggo’s done the business?

Back inside the Villagio Partenza, a peculiar but welcome dance-based distraction was taking place in liberal Holland. It involved a breakdancer, a belly dancer, a sort of S&M-inspired turn, and a Burlesque artiste – the clear winner for me! Definitely going to recommend this to the GB Olympic Organising Committee, if they’re short of ideas.

The fans were taking all vantage points to check out the riders steaming off the start ramp. With the opening of a Grand Tour coming to your country, there’s no point being nonchalant. The Giro is a big deal.

The clock tick-tocked closer to the magical 13.55 CET and Matthias Russ launched himself onto the course. Accompanied by a blaring ‘Pirates of the Caribbean’ theme tune. Pretty apt given the expanse of water at either side of the launch ramp, but which adventurer would turn out to be a Captain Jack Sparrow?

As Russ shot away, the pink balloons marking the Giro’s opening made more serene progress, drifting aimlessly up into the grey.

Alexander Efimkin was off shortly after, looking mean. But the raindrops were starting again after a brief flirtation with a dry half-hour, so we decided it was worth heading out on course to see the action.

Families crammed every window sill above the Stadhouderskade, and seemed to be having a great time. Just as good as the guy who was busy quaffing his way through a nice bottle of red a couple of balconies down.

This being Holland, a bike-friendly culture, every rider was being cheered and applauded. None more than the homeboys from Rabobank, though – we could follow the progress of the Oraanje team as the wall of sound got louder and closer, before erupting as Dmitry Kozontchuk flew over the canal bridge.

It’s a day out for young and old, maybe more for Dads reliving their own childhood aspirations. There were a lot of Dad/Son combos out by the roadside, with the kids resplendent in Rosa. Cycling’s not perfect, far from it, and the sport might have had a bad rap from some … but in Holland, if your son grows up to be a pro, the parents are happy.

The pair above weren’t the only interested spectators. The police horses dutifully checked things out as BMC’s John Murphy sped past. It was time for us to make haste, too, along Ruysdaelkade, by the canal, then onto the Apollolaan and Olympiaweg beside the final 2kms of the course as the riders faced a long painful drag to the Olympic Stadium finish line. Judging by the pelters coming from the team car Jeff Louder might have been flagging.

The business end of stage one was in full swing when we got behind the lines and into the finishing straight. Peter Weening had just finished speaking to his public, but the former Tour de France stage winner wasn’t getting off that easily and was pursued as he made for the sanctity of his team bus.

Next home was a suffering Michael Elijzen – the Belgian posted 48th on the day, just 26 seconds down.

David Millar seems a different man these days, much more relaxed and at ease with himself. Maybe it’s marriage? Whatever the reason, he looked well pleased with his ride which sees him a late-stage suicide break of six seconds off the Maglia Rosa.

There was no doubting the excitement in the announcer’s voice as Bradley Wiggins flew into view, rounding the final corner 100 metres from the line. He roared past the photographers and TV crews without so much as touching the brakes. No messing. The ride of the day.

Brent Bookwalter had been waiting around for quite a while, and pretty much unhassled as the press pack tried to come to terms with the fact that he was in with a real chance of winning the TT. He looked sanguine about his result when Wiggins came home faster, but it’s been a huge day for the 26-year old American.

Vinokourov came in to a big reception and was immediately chased by camera crews, journalists, photographers, fans, probably stalkers, too. It was a fine performance from the Kazakh veteran and means he’s bang in the mix for the overall. Who’d bet against him?

Last starter, last man home, Andre Greipel. A solid ride from Andre the Giant, but he’ll need some help from his team to get him to the line first in Utrecht tomorrow and Middelberg on Monday if he’s to make sure of getting the pink jersey off Wiggins.

A great day to start the Giro, and a great ride to win it. Congratulations to Wiggins, and from Amsterdam … Tot ziens.