Roadside: It’s PEZ’s very own ‘race of the two seas,’ today. We spent the night in Salerno, on the Mare Tirreno; it’s not a beautiful city but that’s not surprising, it was bombed flat in 1943 when the Allies landed. But amble down to the sea front, look right and it’ll take your breath away… 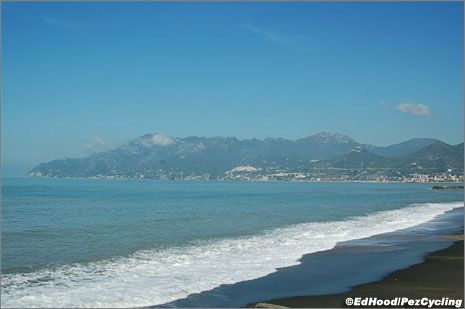 Soaring into the clouds is the glorious Amalfi peninsula – where you’ll find some of the world’s most glamorous resorts and where the world’s finest Limoncello liqueur comes from. 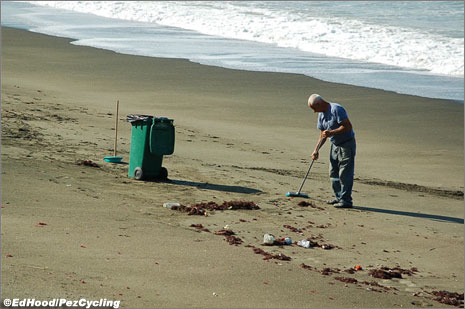 And whilst Salerno isn’t grand, they’re very proud of their beach – they even have guys out sweeping it.

But we’re headed for another sea, today – the Mare Adriatico, all the way over on Italy’s west coast.

Bitonto is the stage town, apparently the ‘world capital of olives,’ the Rough Guide is unimpressed though and we couldn’t find a mention. 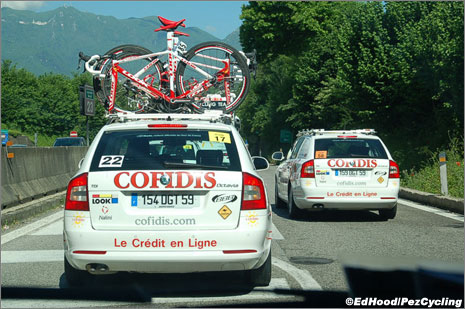 We’re tracking the Cofidis vehicles up to the Avelino start and an interview with Rubens Bertogliati, the sun is out – all’s well with the world.

Well, it was, until a race official wouldn’t let us through the partenza to get on the percorso.

Plan B is to take the motorway over the hills and pick up the race route again at Carosa.

Italy is mountainous on it’s northern frontiers with France, Switzerland and Austria – the mountains give way to the vast plains that run from near to Turin by way of the meandering course of the River Po to the Adriatic at the Golfo di Venezia.

The actual ‘boot’ of Italy has a mountainous spine with coastal plains to the Tyrrhenian Sea in the west and Adriatic Sea in the east. 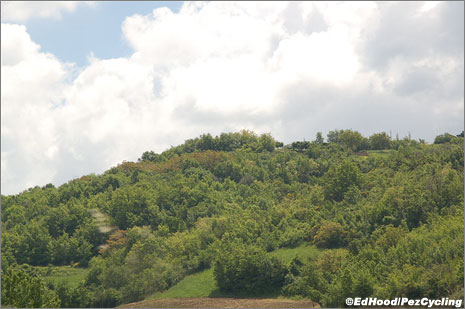 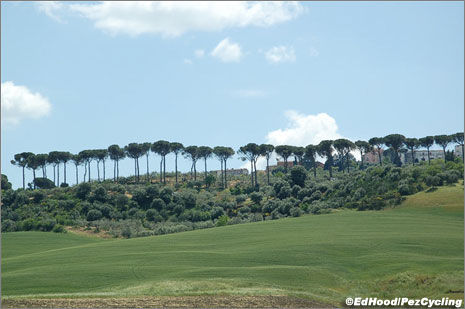 Puglia is the heel of the boot of Italy and has been occupied by the Greeks, Spanish, Romans and even the Normans. 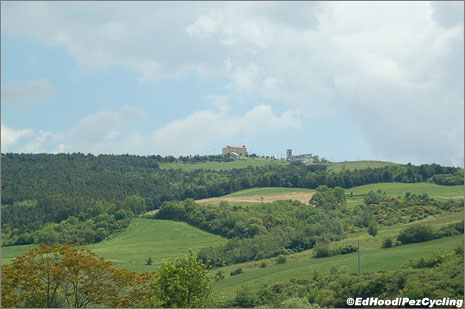 Away from the coast it’s hilly; not the soft, round green mounds of a Tuscan landscape, rougher, less cultivated and less green than it’s equivalent to the north. 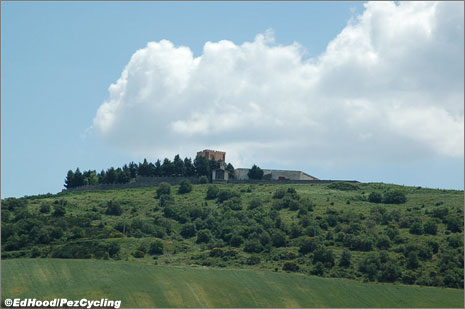 But the towns are on the hilltops here, too – this used to be wild country. 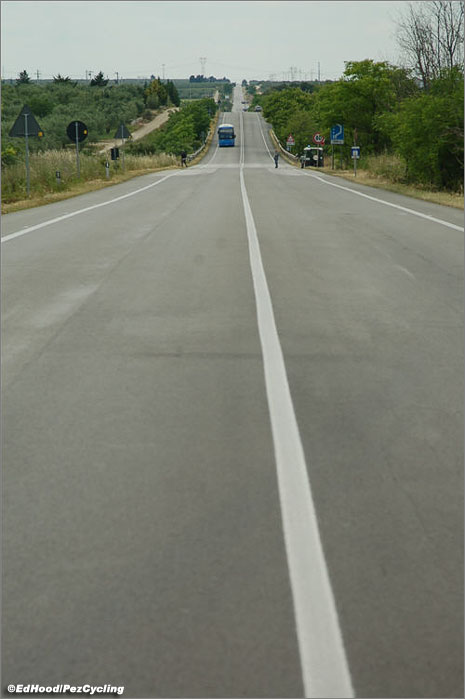 Carosa appears by way of the motorway and we’re on an endless gently rolling plain with arrow straight dual carriageway; this’ll make for exciting TV – I can hear Viktor ranting already.

The wheat from the fields here is said to make Italia’s best pasta. 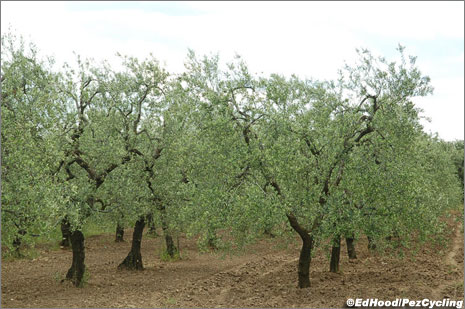 Olive groves proliferate and the flags indicate that there’s a stiff head wind – looks like a bunch sprint to us. 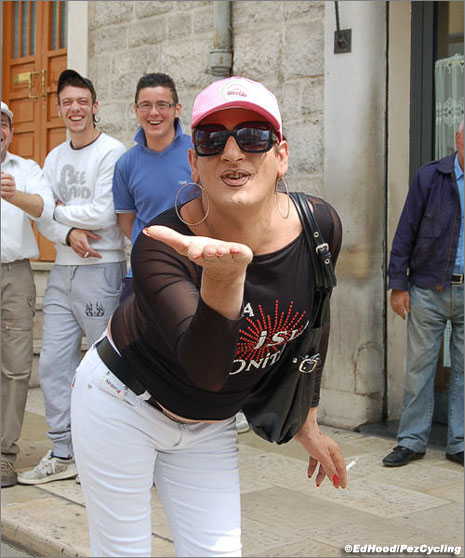 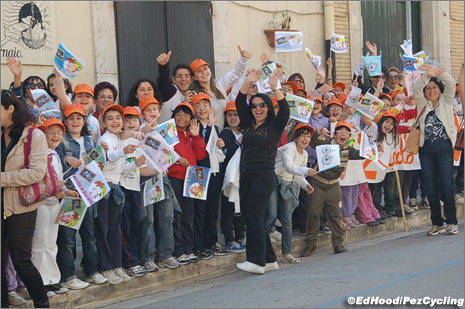 The little towns ‘make holidays’ with school kids by the pavements and folks out on their verandas.

At Corato, the organizers excel themselves with a British time trial style dual carriage way ‘turn,’ we come in to it as the race caravan comes out of it – bizarre.

As Martin and I agree, it is the ‘Tour of Italy’ so it has to come way down here, now and again – however flat and featureless it may be. 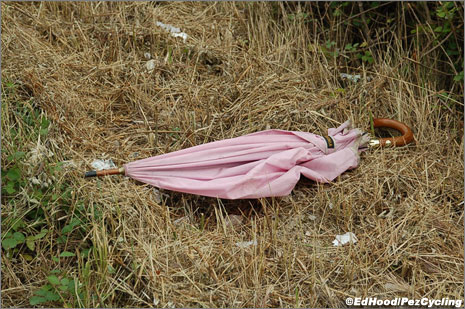 At one of our photo stops we spy an abandoned pink umbrella – here since the last time the Giro visited, no doubt.

The temperature climbs to 23 degrees and there, in the far distance is the Adriatic, blue as an Italian team jersey. 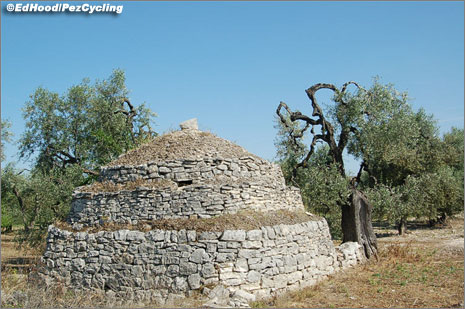 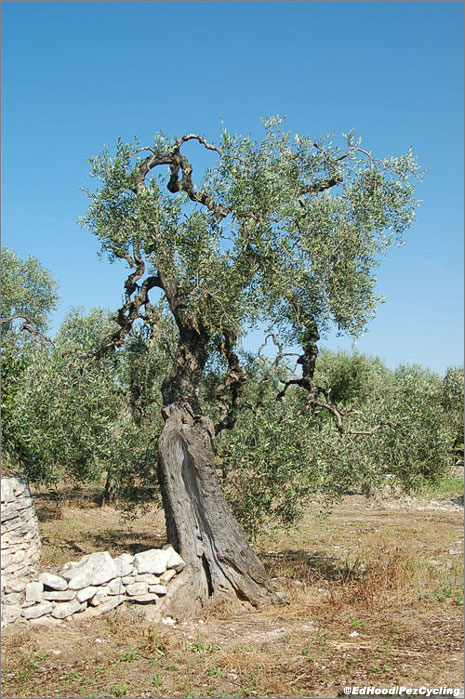 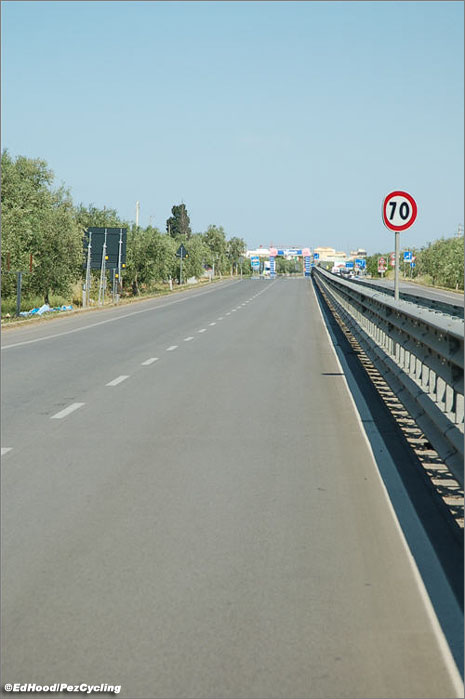 It’s classic ‘train’ terrain – a break will concede one minute per kilometre in the finale on a road like this – we can imagine Big Adam Hansen dispensing justice along here. 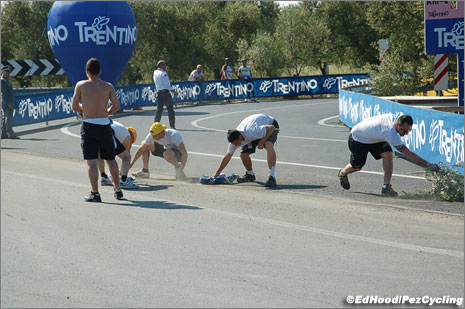 Inside four to go, race personnel sweep frantically at a 90 left to get rid of the gravel – nice work, guys.

Bitonto, hot dusty, and the finish circuit is wild – well surfaced, but with lefts, rights and a super fast downhill through the red kite.

We take the run off to the team bus parking – let’s get some shots after the finish to go with yesterday’s start pics. 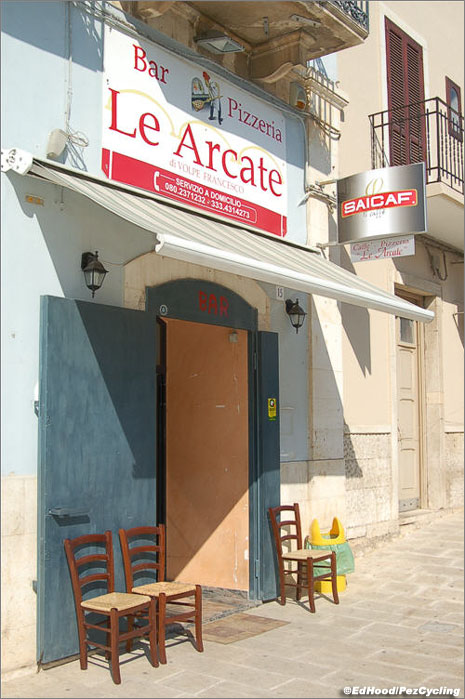 Peroni for Martin, Dreher for me – I remember when Roger De Vlaeminck sported those colours.

Up to the bus park; lets see what’s happening at the Garmin bus. 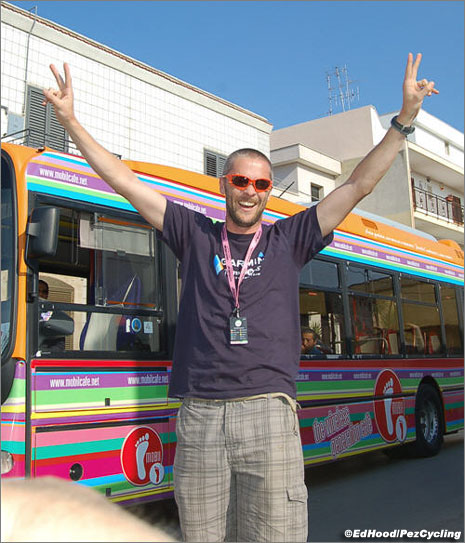 Toby, the physio is whoopin’ and a hollerin’ 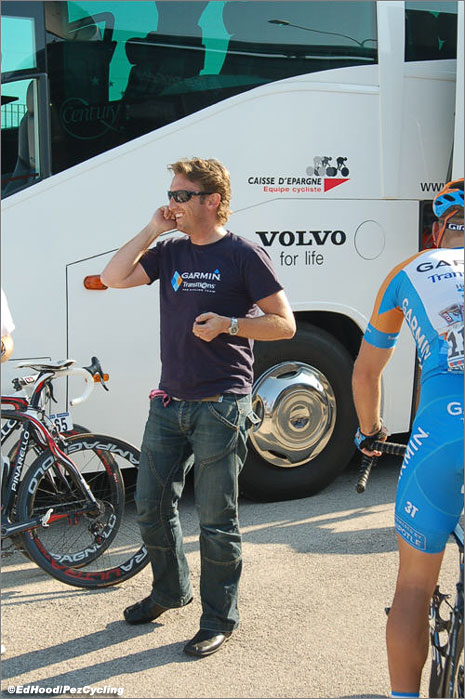 Matt White is on the cellular with a smile a mile wide. 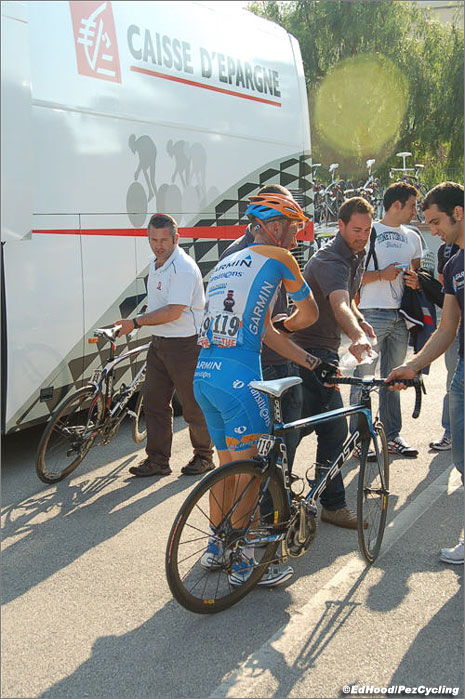 A tired looking Svein Tuft gets hand shakes and pats on the back as he abandons his bike to the mechanics. 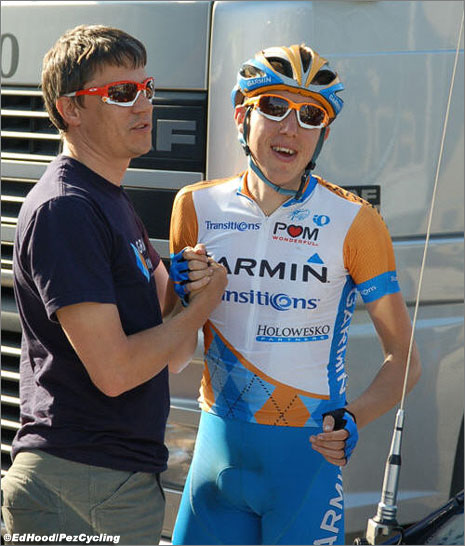 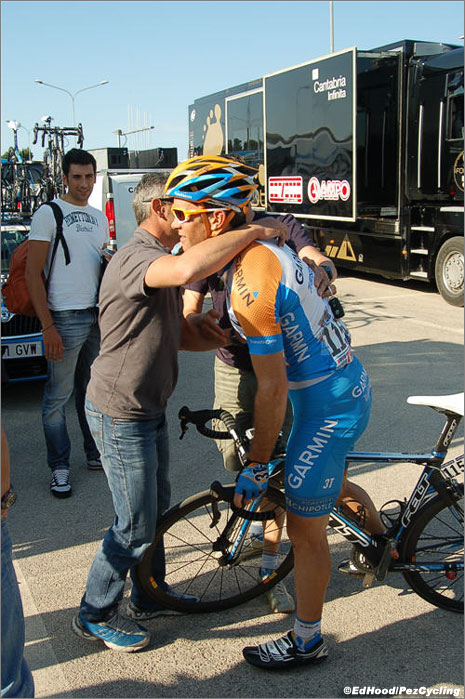 Julian Dean gets the biggest cuddles for that kamikaze lead out. 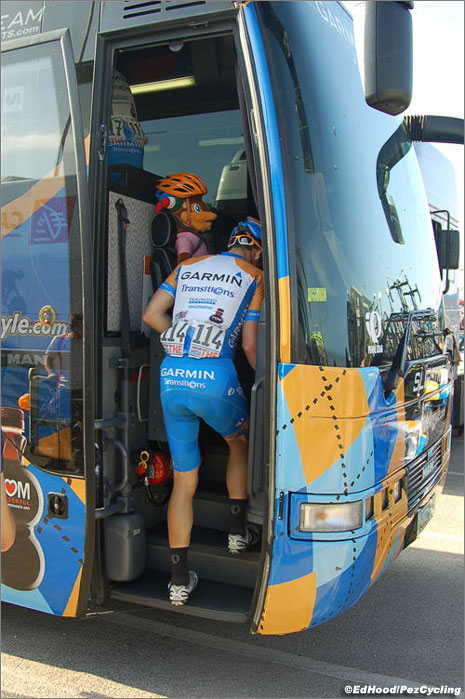 And Jack Bobridge shakes the hands and steps on the bus – he was the one piling the coal on the fire on those long straights. 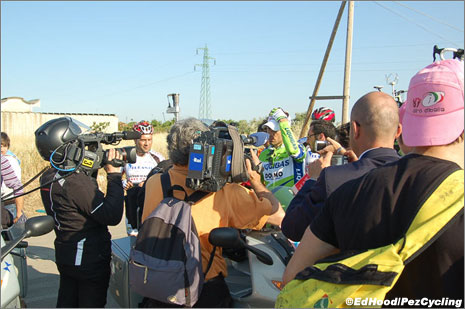 Over at Liquigas, Nibali patiently answers questions but is actually thinking about a shower and a massage. 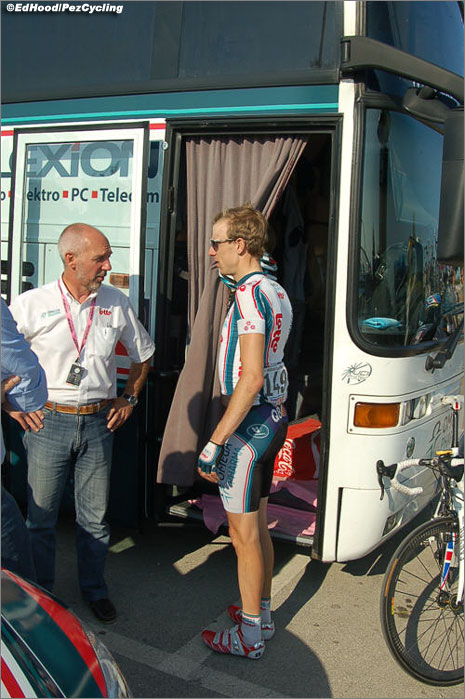 Lotto’s Charly Wegelius explains his ‘close but no cigar’ break to management before he slips on the bus. 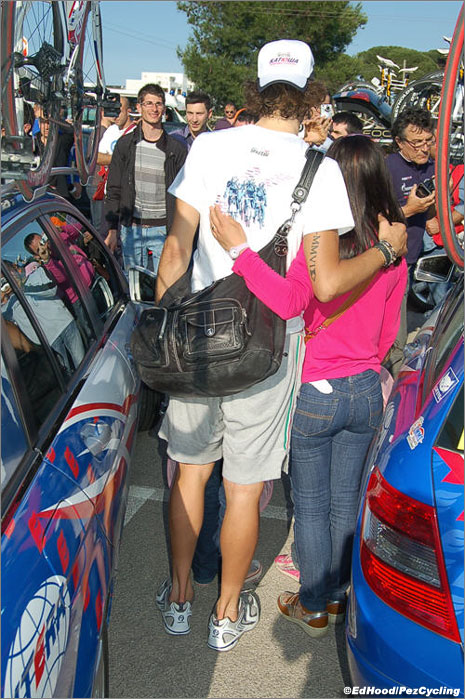 Pippo is the most popular man on the race, he can’t move without fans mobbing him – nice man bag, Filippo. 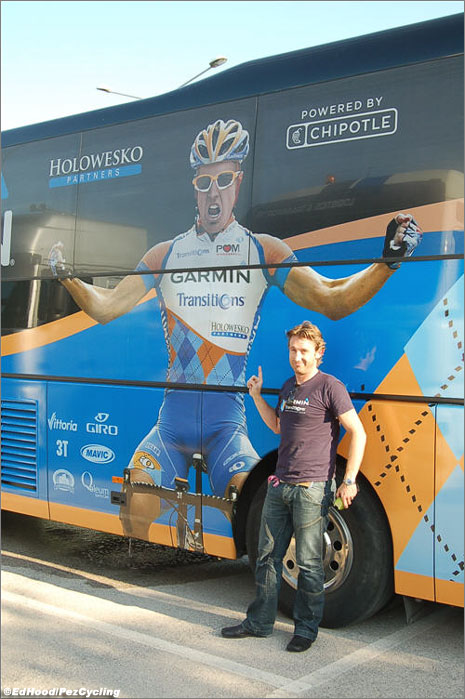 And finally we have to get Matt White to pose for a shot with Tyler. 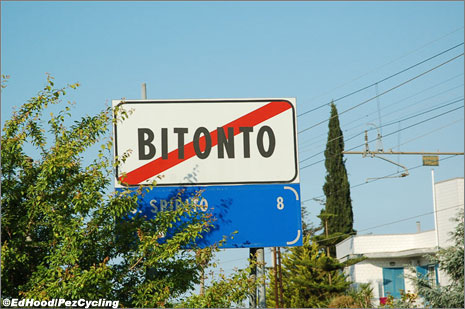 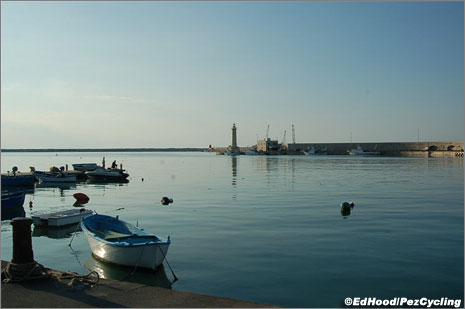 But we have to get one shot of the Adriatic – after all, it was the race of the two seas.