Well, we’re here, eating pizza in Viareggio. The flights went well, we even had time for a quick look at the leaning tower of Pisa. And tomorrow we join the race, my fifth Giro, Martin’s first – after his three Tours de France. Let’s have a look at the story so far… 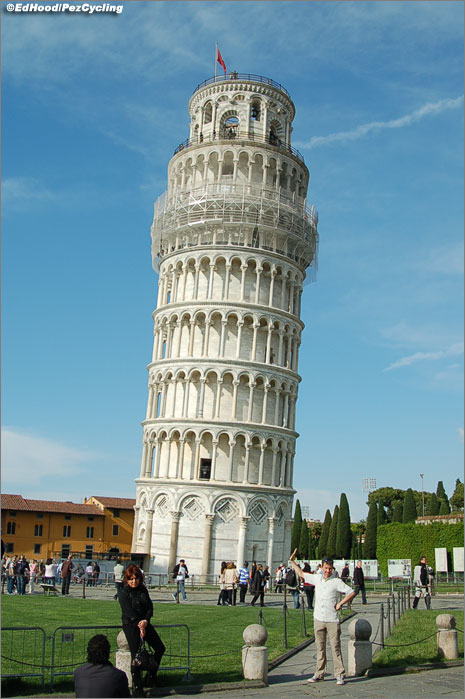 Stage One
That thousand pounds per day that Pinarello are allegedly paying GB’s Greek super bike wizard to help design the ultimate time trial bike paid off on Saturday when Bradley Wiggins grabbed prologue glory around the streets of Amsterdam.

Meanwhile, over at the Gazzetta website the headline ran; ‘Aspiring Baronet Wiggins conquers first Maglia Rosa’ – those Italian sub editors just have so much more flair. 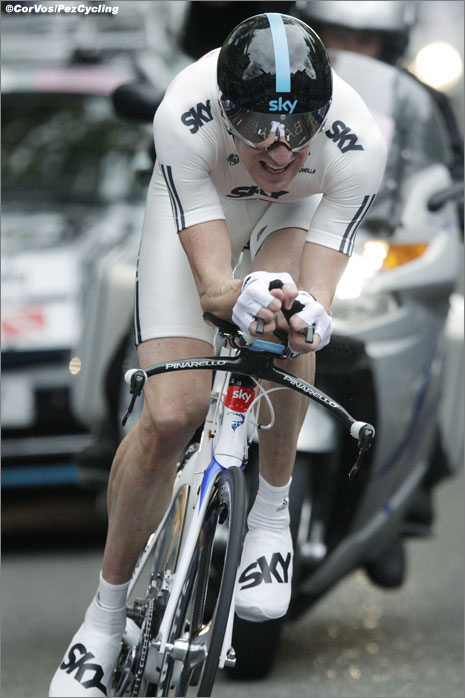 In the supporting copy Brad said; ‘I’d love to have a crack at the GC in the Giro and I may end up in a position where it would be difficult not to.’

Apart from perhaps putting the chicken before the eggs, there’s the small matter of his employer’s requirements.

Beautiful though the Giro is, it’s not le Tour and the Murdoch family – ultimate pay masters at Sky – would swap half a dozen classics, the Giro and Vuelta for the one thing that really counts – a Tour podium place.
That’s the one that hits the spot; in the UK a giro is a type of check that the government uses to pay unemployment benefit – but the Tour de France with it’s yellow jerseys and Lance Armstrong; that’s a different story.

Stage Two
When Tyler Farrar came down in one of the numerous crashes during stage two, there were emails to Eurosport quipping that his Transition lenses weren’t working too clever.

The man from Washington State with the squarest shoulders in the business had the last laugh though. 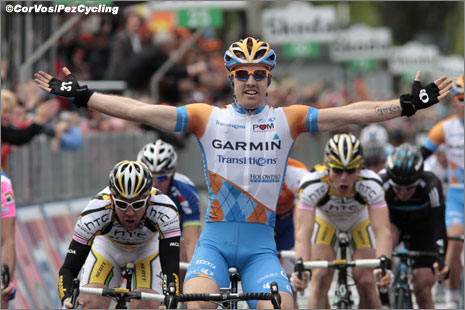 Excellent team work from Garmin got him back to where it matters and he was too quick for the survivors and kamikazes in that 300 metre finishing straight.

The road conditions aroused a lot of comment, but they’re the same for everyone – and one never sees Lance on the deck in an early, twitchy stage – but one guy with a little flag on a traffic island does seem a tad inadequate.

Brad was caught in one of the crashes and a late split to lose pink to Cadel Evans – that Giro/Tour quandry was starting to sort itself out for the Englishman.

Stage Three
Another day, another series of crashes and another pink jersey. This time it was Cadel’s turn to abdicate that sexy pink tunic; but at least he has a nice alternative to wearing a boring old team jersey. 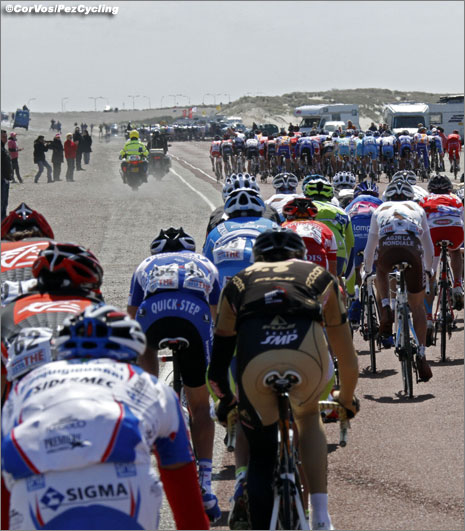 Up among the madmen, Greipel still wasn’t hitting the right notes, Brown was desperate but Weylandt committed early and finally we got a 2010 smile from QuickStep DS, Patrick Lefevre – we think.

Young Englishman Adam Blythe impressed, jousting with the fast men in the top 10.

Brad? Let’s just say that now there’s absolutely no reason to have to worry about ‘going deep’ in the mountains to defend a GC place – that crash on the coast road saw to that, and he missed the split, again. 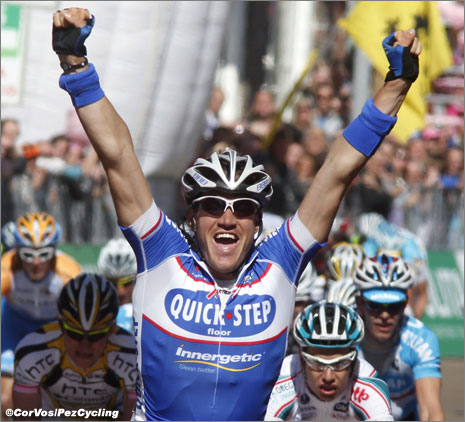 And in the pink? Vino! Love him, hate him – but hard to ignore him.

Rest Day
An early one to facilitate the trip to la Bella Italia.
The riders hate early rest days, it makes the middle part of the race seem very long.

Stage Four
The team time trial, that most beautiful of races.

Sky went deep; Wiggins, Barry, Cioni, Cummings and Henderson rode themselves beyond the pale – check out those faces in the last kilometre.

But Liquigas are masters of this art, too – remember Sardinia, two years ago, where they were superlative? 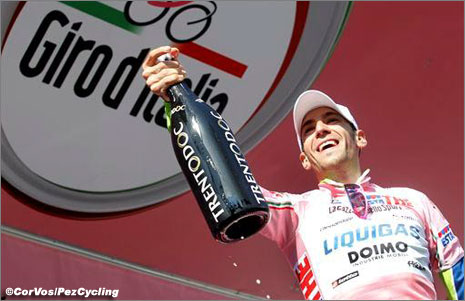 And that pink jersey just couldn’t stay on the one pair of shoulders for more than one day – ‘The Shark,’ that’s Sicilian Vincenzo Nibali to non fans, reaped the rewards of his Liquigas squadra’s endeavours.

Meanwhile, back at The Guardian – a newspaper which prints full colour pictures of the Tour every day – Sky’s hard work merits not a word.

The Giro as important as the Tour to the British media? Sure.

Stage 5
It’s been a bad week for Viktor, first a taxi ran him over, landing him in the hospital, then a French stage win – it just gets worse.

Jerome Pineau underlined the fact that there’s been a sea change in the French riders over the winter with QuickStep’s Lefevere definitely smiling. 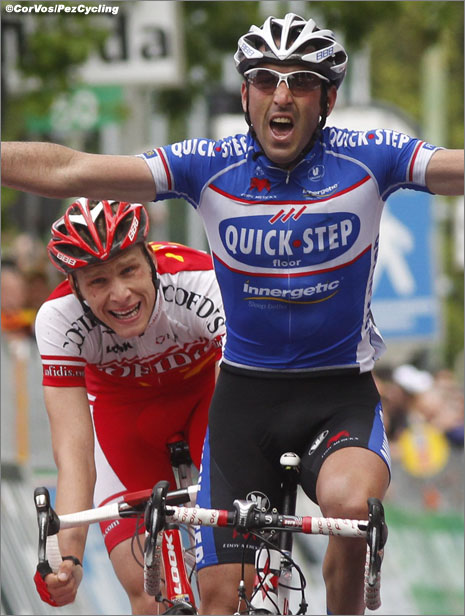 The maglia rosa must like the shoulders of the Messinese – that’s native of Messina – who first caught the eye with bronze in the World Junior Time Trial Champs at Zolder in 2002, and was happy to stay there.

Stage Six
And that brings us up to date. When we heard that ‘Lloyd’ had won the stage today, we thought it was ‘Big Dan’ Lloyd from Cervelo, but it was actually 2008 Aussie champ, Matt who was getting the interviews on Italian TV.

PEZ friend and Swiss TT champion, Rubens Bertogliati was a fine second – we’ll need to ask him about that, in person. 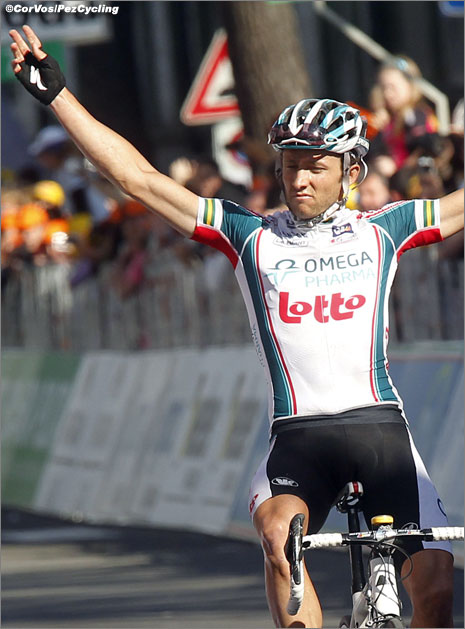 Nibali is still in pink but tomorrow it could all change – hills, strade bianche and well, we don’t know what else.

But whatever it is, PEZ will be there. 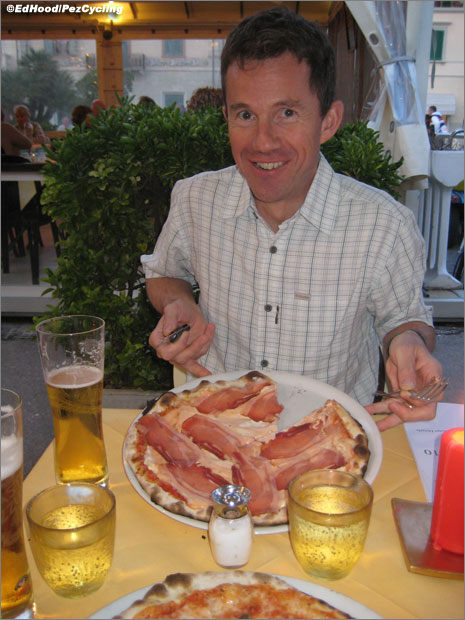 We’ll try hard to match the sterling work done by Gordon Cameron and The Boss, Mr. Pestes himself – but first, we have a pizza to demolish.