Roadside St.16: I’ve never enjoyed a day off as much as yesterday. We have been chasing this year’s Giro d’Italia, our first ever earnest attempt at a Grand Tour, since Verona, so twelve consecutive days was a trial by fire to say the least. Today, we got back into the rhythm with a beautiful, if uneventful trip from Lago di Garda to Pfalzen.

Before moving forward, it must also be noted, that we had both of our computers, all of Ashley’s clothing, and all of our external hard drives stolen the day of the team time trial in Verona. That was an auspicious beginning.

Nearly two weeks later, and that disaster seems like a distant memory – as long as I don’t think or talk about it. It sits nicely, just out of view, as long as I ignore what that theft meant to us: all of our images from the last three years, gone. Some will say – why didn’t you back them up? We did, but it’s hard to leave back-ups behind when you live out of a car, you know? We need to figure out a better solution for the future, but rest assured, it was a painful lesson to learn.

So, let’s fast forward twelve stages and a rest day, and it’s a bright, sunny, perfect morning, the day after one of the worst day’s of weather I’ve seen in a long while.

We’re working for the Giro d’Italia right now – trying to take pictures of everything that’s pretty. Seriously, that’s it. Our assignment is to show to everyone just how beautiful this country and this race really are. 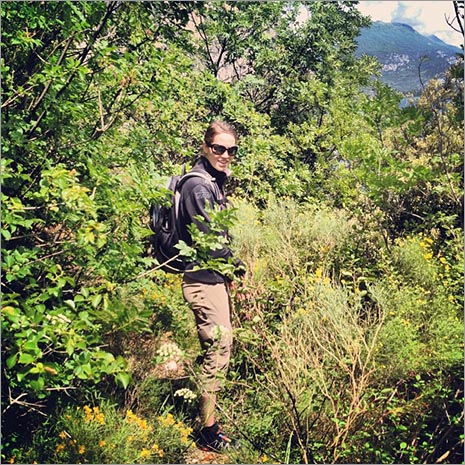 In search of pretty viewing spots, Ashley and I have ended up in the bushes a fair bit the last couple of weeks.

Today’s stage, like every other day at the Giro, was a beautiful one, unfortunately, we only managed two stops along the route. We caught it early along the shores of Lago di Garda, and then again on the final climb to the town of Pfalzen. We had hoped to get another stop in the middle of the race, but it just didn’t work out.

Shrug. We do a lot of shrugging these days. Sometimes it’s an angry shrug, sometimes it’s resigned, but it seems that chasing the race is defined not by what goes right, but what goes wrong, and each and every day offers up so many wrong everythings. I guess, after a certain point, we’ve started to realize that it’s not things going wrong so much as it’s things going the way they should when there are so, so many variables in action for every move we make. 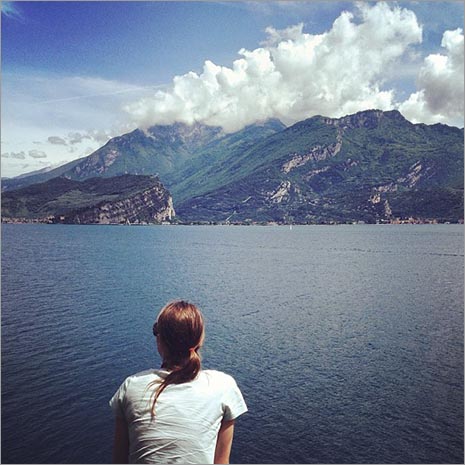 Not to mention the fact that we’re falling apart, which means one big thing beyond the traditional frayed nerves and grumpiness – memory. We’re losing it. We forget everything.

Today, for instance: we found a nice spot along the road that hugs the lake. We then set about doing what we enjoy doing very much – hiking to a pretty spot. We climbed and climbed and decided that Ashley would head down and set up shop next to the road, while I’d go ever higher to a small outcropping, which overlooked the road far below. Great idea. It was perfect. Unfortunately, when I reached the top, and Ashley reached the bottom, I realized that I had both of our memory cards in my pocket. She had no memory for her camera, and there were only a few minutes before the race would arrive. 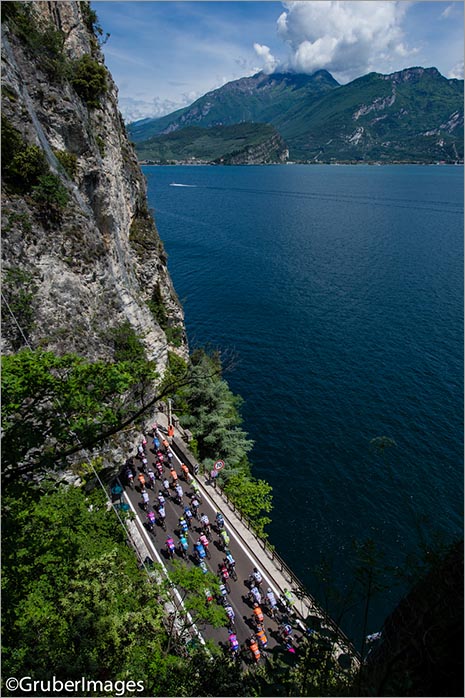 While I wasn’t able to get back to my previous spot after our horrible moment of forgetfulness, this one wasn’t too bad.

The peaceful fun of a nice hike through the woods suddenly became a nightmare. I sprinted down the mountain and back to her, handed her the card, only to find that she had gotten one from another photographer, sprinted back to the rock, and found another place maybe a fifth as high as I was before. It was still pretty ok. No complaints here.

That was just the 728th thing that has gone awry. It worked out, but it took some serious life force to take care of. 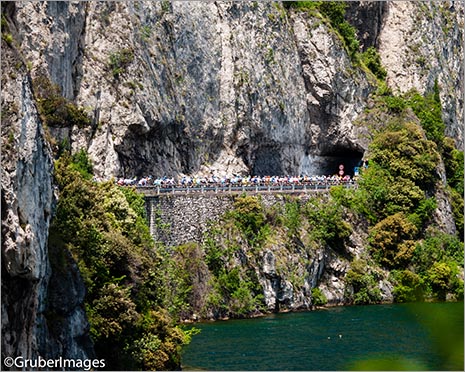 Ashley’s view of the opening part of the stage along Lago di Garda.

After that drama, we settled in to a nice drive along the race course, punctuated by an accidental illegal entry into the course – we were JUST ahead of the break. We were escorted to our rightful place in front of the flapping flags of the lead car and set off to find our hoped for second spot. It didn’t work out. We saw lots of pretty places, but nothing that really jumped out at us to stop and do something good. After nearly two weeks, we’re starting to get a little bit picky. I don’t think that’s a bad thing though. It makes the work at the end of the day a little bit easier.

The drive from Garda to Pustertal was a familiar, enjoyable one for us. We spent 13 months in Innsbruck back in 2008/2009, so this was an area that we frequented, and it’s one that I love dearly, especially the area just to the northeast of Bozen. It’s wild, it’s overgrown, it’s quiet, it’s special, and it’s an area that I’d really like to spend a lot more time in. We’ll make it happen at some point.

We had planned on making our final stand for the day in the town of Kiens. It was here that the mostly flat race was hit with a stiff climb of a couple kilometers before the final two kilometers into Pfalzen. It was a pretty little town with some little bits of bricked roads (can’t call them cobbles), a big church, and some switchbacks. Sounds like a good spot to me!

We parked in a traditionally awkward position, collected our backpacks, and set off in search of a good spot. Instead, we found some friends that we’ve made over the last year via the internet, Dan and Janine Patitucci. They’re the geniuses behind Patitucci Photo and DolomiteSport, and really good people. We were really happy to meet them – and about to enjoy dinner with them in a few minutes. That dinner date is worth a huge sigh of contentment. It’s in a time like this that a dinner with friends means so much more than normal.

We chatted, saw more people we knew – Igor, Markus Neuert, Kei Tsuji, Veeral Patel, Jim Fryer…it was pretty amusing to be in a place we’ve never been before with so many familiar faces. It’s like that a lot, actually. 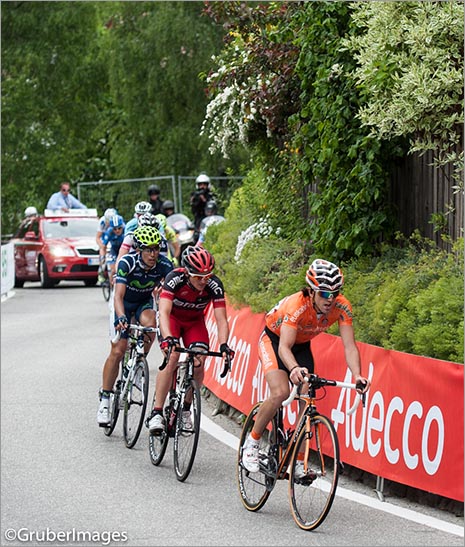 The roadside view of the break… 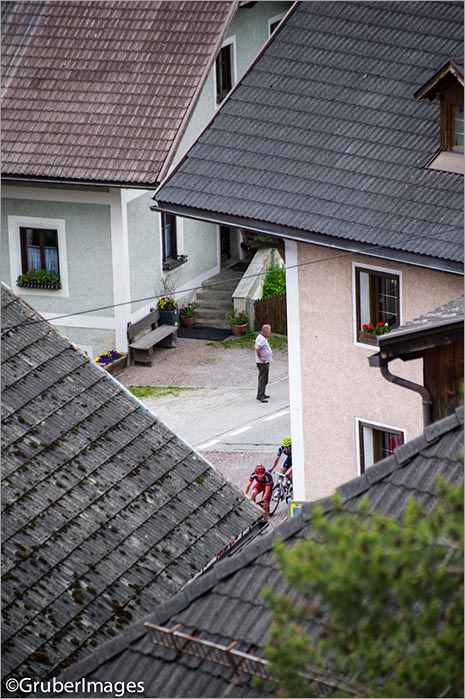 …and the squirrel’s eye view.

After some enjoyable chats, we got to business, found our spots, and waited. The break had twelve minutes, so the race would likely be decided around these few switchbacks. I was more keen on the wide shot that would look really nice with the peloton in it though, so I didn’t get much of the action from below. 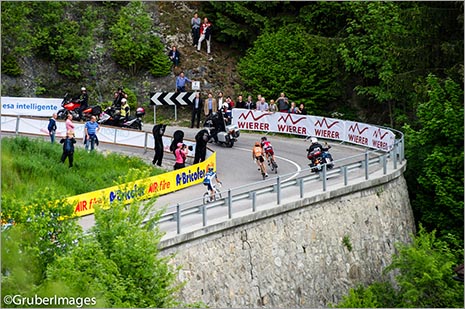 It wouldn’t be long before Insausti (Euskaltel) would leave Frank (BMC) behind.

Ashley, however, was right in the midst of it.

A little less than ten minutes later, and the field was upon us. 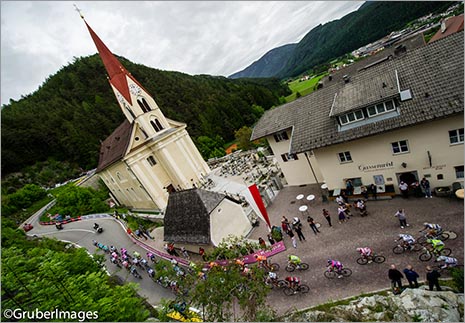 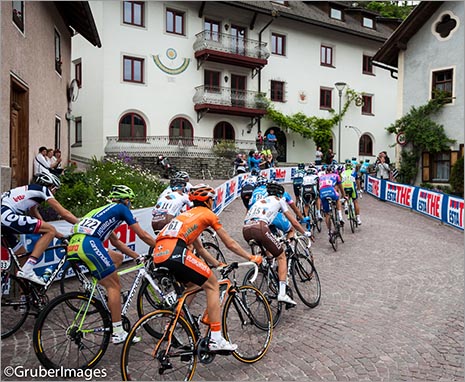 A minute or so later, the last rider went by, and that was it.

I couldn’t believe our good fortune when we got to the car to find that today’s hotel was only ten kilometers away. I’ve never been so happy for a short drive. 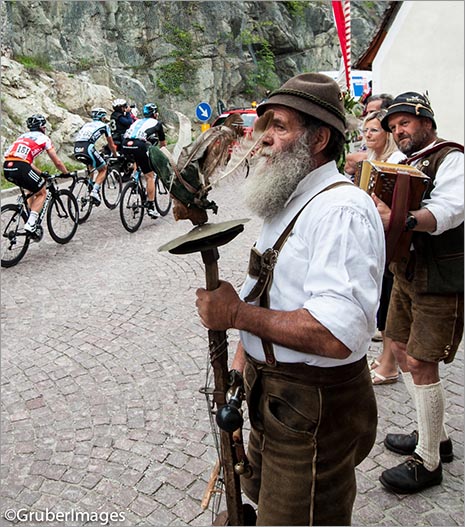 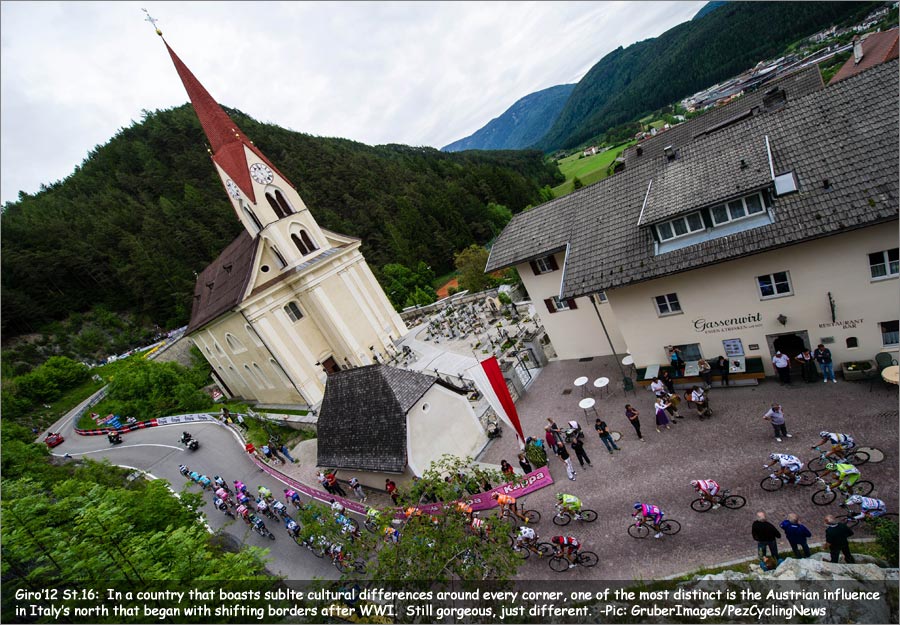 With the click of the submit button, that’s it for us today. Dinner is up next, then it’s time to turn our attention to what will likely be one of the more beautiful days of racing we’ll see this year – tomorrow’s glorious romp through the Dolomiti. Can’t wait.