Roadside St. 2: The printed weather forecast on the board in our hotel’s reception hadn’t promised much. A ridiculously jovial tick under the graphic of a dark cloud with tumbling raindrops said “Pouring Down!” for Saturday, Sunday and Monday. Guess what? Hauling the curtains open, bleary eyes adjusted to the fact that it was dry. Bet the riders were pleased, too … 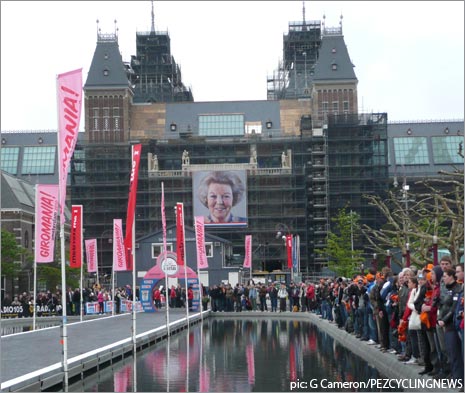 Queen Beatrix of the Netherlands gazes down beatifically from the scaffolding around the Rijksmuseum – there are major renovations going on, but we’re assured Rembrandt’s ‘The Night Watch’ can still be seen. The royal is watching over her populace and her visitors from the 34 nations represented in the Giro’s 2010 starting line-up.

Not watching proceedings quite as intentedly was young Nadja, with her mum Sjoukje. The fruit juice and croissant were much more important, and who can blame her? I was still coming down from a Sugared Waffle high myself.

Amusingly, or disappointingly depending on your viewpoint, the poster just outside the Villagio Partenza drew the ‘drugs’ and ‘cycling’ threads together a little tighter, but at least here in Holland, some things are legal.

Coming from the UK where cyclists are treated with a distressing amount of contempt, the difference here in the Netherlands is staggering; everyone rides no matter how old, no matter how glamorous. Whole families hit the streets together, and go to see bike races together.

The riders on the Giro do their jobs promoting sponsors by tearing across half of Europe at dizzying speed. This, though, looks more like how it should be done – at leisure. It also fits in very nicely with the old bike-racing mantra. “Don’t stand when you can sit.” 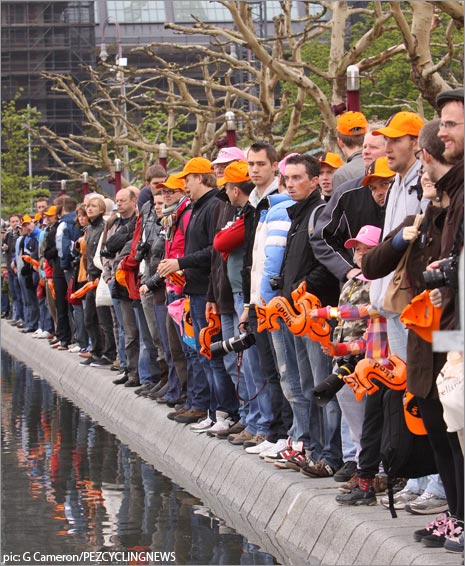 The barriers are lined three and four deep, and I don’t think a water feature would keep the fans at bay in some sports, but here things are ordered, well-mannered. Everyone’s patient, on a chilly day, and Skoda have done a fine job handing out their orange caps and comedy glasses. 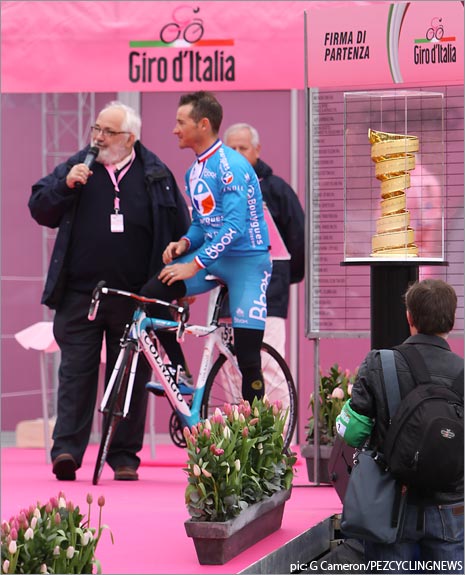 Thomas Voeckler had the right idea today, turning up to sign on first, a good twenty minutes before anyone else. At least that meant he was back in the bus and warming up before the other riders had braved the cold.

Poor Matt Lloyd, he just doesn’t get temperatures like this back home. The skinny climber hasn’t got a lot of body fat to shield him from the chill and he looked thoroughly miserable waiting for the queue ahead to finish signing their names.

Brent Bookwalter is a man in demand after his breakthrough yesterday afternoon, getting interviews on stage, cornered by TV crews and signing a replica red points jersey, which he’s wearing today. 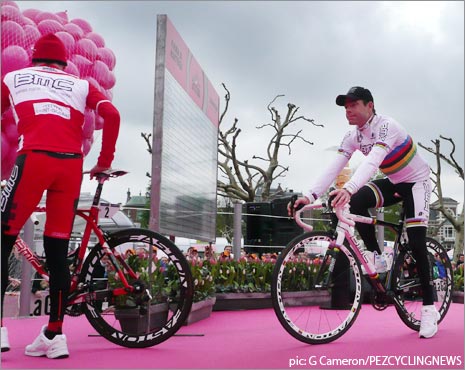 His attire for at least stage two fits rather nicely with the BMC team colours, and gives them a neat photo-op next to Cadel’s world champion rainbow bands.

Fillipo Pozzatto is next on stage, looking every inch the star as he floats across to the lectern to sign his name. He looks like he’s going to give us a Sunday sermon as he grips on tight to the edge of the lectern, a sermon on how to wear a national champion’s shirt, before thinking he’d just be wasting his time.

One guy who knows all about wearing important kit is home hero Joop Zoetemelk, a legend that comfortably two generations of Dutch male talent has failed to imitate. The ex-Tour de France winner and ex-World Champion looked in good shape giving an expansive interview for Dutch TV.

He’s clearly still a big draw because as soon as his name was announced, the faces in the crowd started to disappear behind viewfinders and camera LCDs. It’s this kind of moment that reminds me why I love doing this; to keep some sort of a distance when your supposed to write objectively isn’t always easy, and that feeling is multiplied when you experience the depth of feeling these old champions arouse.

Talking of old champions, Gilberto Simoni’s been around the Corsa Rosa a few times in his day. He was able to understand the hostess’s questions in English perfectly, even if he answered in Italian. I know whose legs I prefer though … sorry, Gibo!

And this is who those shapely pins belong to, the lovely, multilingual ‘Voice of the Giro’, Barbara Pedrotti, with the maglia rossa, maglia blanca and maglia verde lined up behind her.

There was a sudden meleй as departure time drew near. Riders started to arrive for the sign-on in their dozens, then scores, as the minutes disappeared, but good humor seemed to reign.

Carlos Sastre maintained a serene presence throughout, patiently giving interviews as his bodyguard, Inigo Cuesta, hovered in the background.

Not quite sure what conspiratorial goings-on were being played out here, but this Italian conversation lasted a good few minutes before being broken up.

Ivan Basso is still a big hero to the tifosi despite his checkered last few years. He also seems to have plenty friends in the peloton. A couple of QuickStep riders gave him an encouraging round of applause as he made his way to the sign-on – “Hey, EEE-Van …” – which he acknowledged with a rapid handshake which saw him cruise right on past them and directly to the front of the queue. It helps to be a patron! 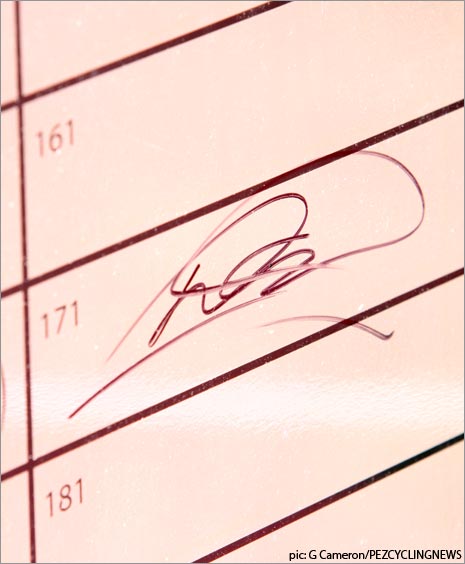 There was a paper sheet to be signed by all the riders, and also a perspex board, but that seemed to be reserved for ‘special’ ones: only Evans (#1), Sastre (#71), Basso (#131) and Maglia Rosa Bradley Wiggins (#171) got the privilege of putting pen to plastic. In the background, David Millar was discussing yesterday’s result: “Brad did a great ride, he won fair and square.”

The divine Yolanthe Cabau van Kasbergen wafted onto the podium and sashayed down the ramp to help wave the riders off. It should make for a quick stage if they want to come back for another look! 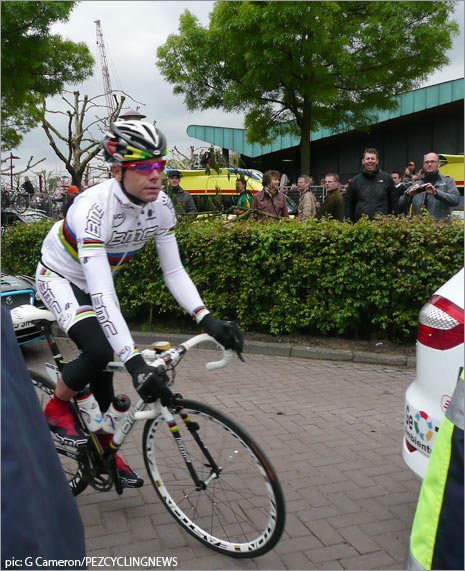 As the riders were lining up, Cadel Evans was heading in the opposite direction, back through the team cars to pick something up, but he had seven kilometres of neutralised road before the real start. The very cold looking peloton – bandanas, gillets, long-fingered gloves, knee warmers and all – did make the start at 12.15 prompt on their way to Utrecht. I headed off to feed my rapidly-growing waffle habit, washed down with a hot chocolate chaser. Wow … high times in Amsterdam. From the Giro, it’s ‘Ciao’ and ‘Tot ziens’ for another day!