Roadside St. 21: The Giro has just wrapped (minutes ago) – and I’ll go on record as saying this has been one of my best days ever at the race. Too much happened for just one report, so I’m gonna get it started with how this amazing day took shape…

By now you know the story – Plan A begat Plan B, etc. After last night’s drive down from Edolo, suffering through a roadside meal of crappy pizza (yes – they do have that here in Italy), and finding my way into Verona’s centro storico after dark (yet amazingly finding the hotel on my first attempt), I was in dire need of some sleep. 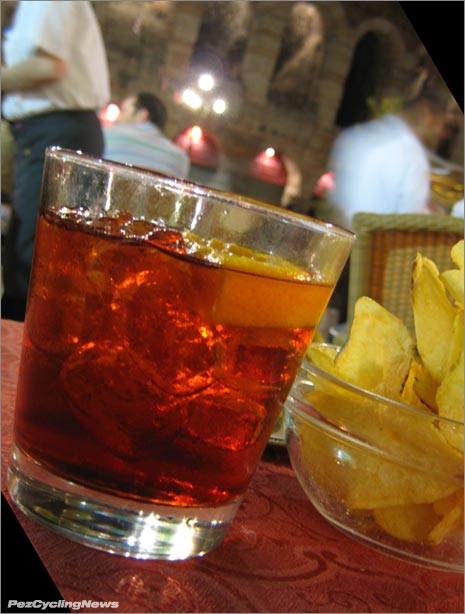 Problem was – Saturday night in Verona’s old town, and just a block from its famed eons old Roman ‘Arena’ (ie: upscale shopping and bar/ cafй district) which was crowded with stylish Veronese, well, there’d be no sleeping until I’d dulled my 2+ hours drive-adrenaline with a much required nightcap – in this case a negroni – taken at one of the many Arena-side cafй/ bars.

The Arena also happened to be the sight of today’s final Giro stage, and in addition to the Giro roadies setting up the start/ finish line structures, there was a concert in the Arena, and just across the Piazza, some kind of Italian music awards show. You bet the place was hoppin’. 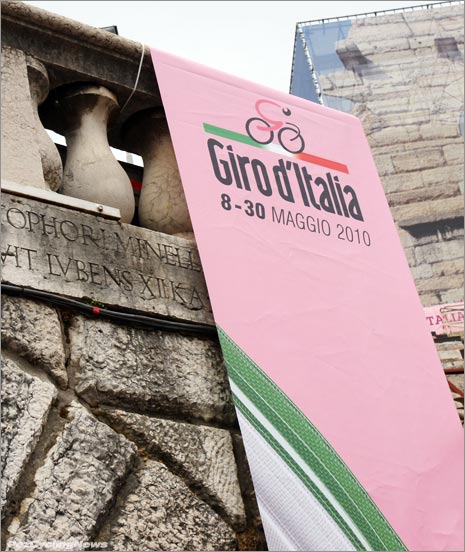 But my negroni did the trick, and three long days on the road caught up to me in the shape of an 8:00 am wake up, which sadly meant I’d miss out on an early ride with ex-world champ Maurizio Fondriest. I know… there’s no excuse. But you gotta trust me – fatigue on these gigs is worse than you know.

So I took a page out of Ed Hood’s book, and promptly located this morning’s Gazzetta dello Sport, a suitable cafй, and a traditional Italian breakfast of cappuccino and brioche. 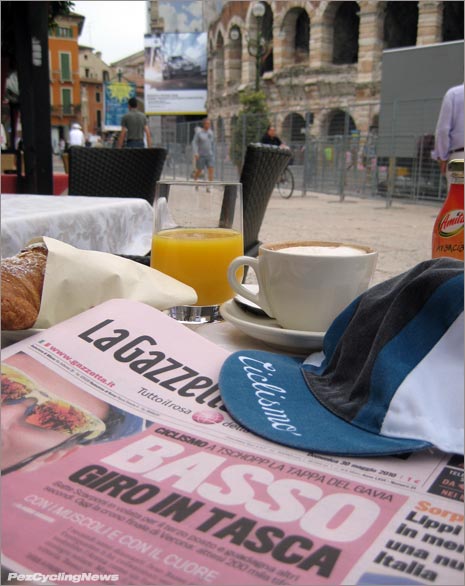 The race is all but done, and today’s 15km TT on the World’s course from 1998 and 2004 is pretty much a formality, and a great reason to throw a big party.

A walk across the piazza revealed that today’s stage would feature a ceremonial finish inside the Arena, which seems to get as much use today as in Roman times. 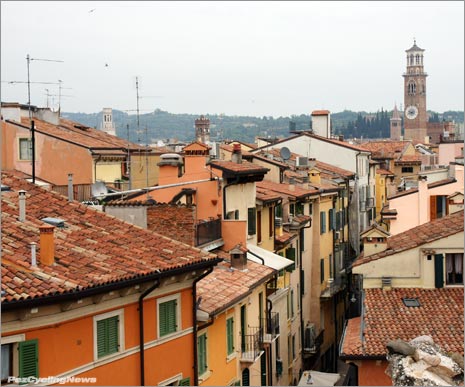 Last night’s concert was long gone, the props from a recent production were stacked outside, and the evidence of a long night of work by the Giro crew was clear. 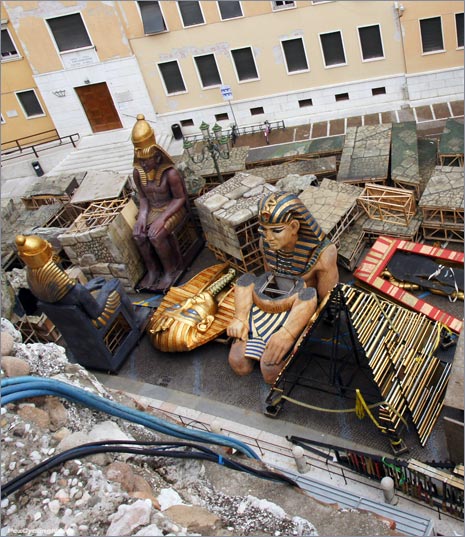 Inside had been transformed into a theatre for cycling, and with a pleasant day forecast, a cooler setting to bring down the curtain on a pretty exciting bike race I could not think of. 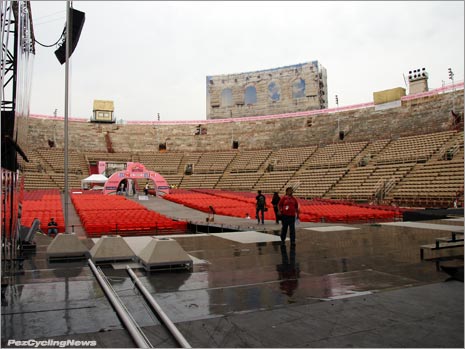 This is an amazing structure, and I was invited in for a look around by the Giro’s media relations officer Matteo. There’s something about standing inside an empty auditorium, and looking up at those unfilled seats, that’s even more incredible when you realize some guy did this same thing nearly 2000 years ago. 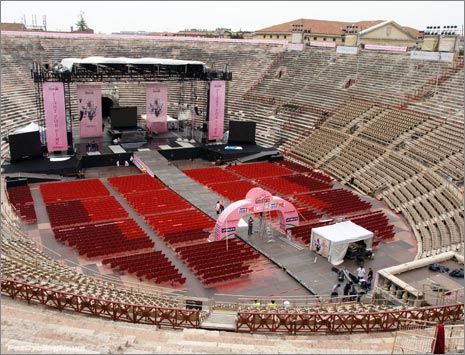 I hiked to the top to scan the view, and take in a rare roof top view of an old Italian city. The finish line crews were still at work, as were the barristas and waiters at those ringside cafes. 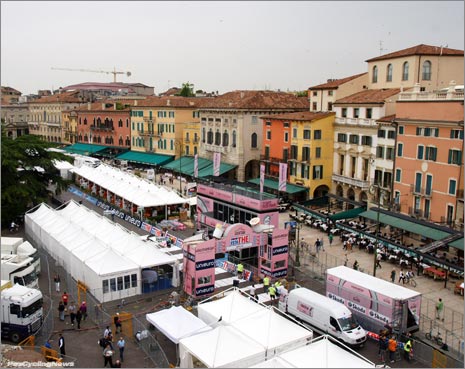 Back at the hotel, I noticed a young Team Sky rider checking in. Chris Froome joked about being “kicked out” of the race on the Mortirolo (at least he’s got a sense of humour about missing the time cut), but enjoyed the race and wants to come back again. He was meeting his dad Clive, who’d just arrived from South Africa. 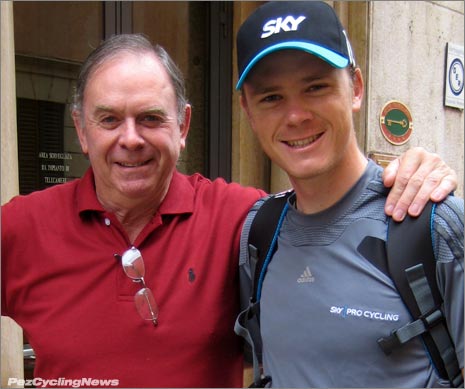 Over at the start line, I finally met Maurizio Fondriest in person – after riding his very nice TF1 around Italy for the last 5 weeks, and talking on the phone a few times this week to hopefully work in a ride. That last phone call was a classic – basically two of us standing with our backs to each other saying:

He was part of a sponsor-event team time trial for vips, fans and clients, that ran before the actual race started. 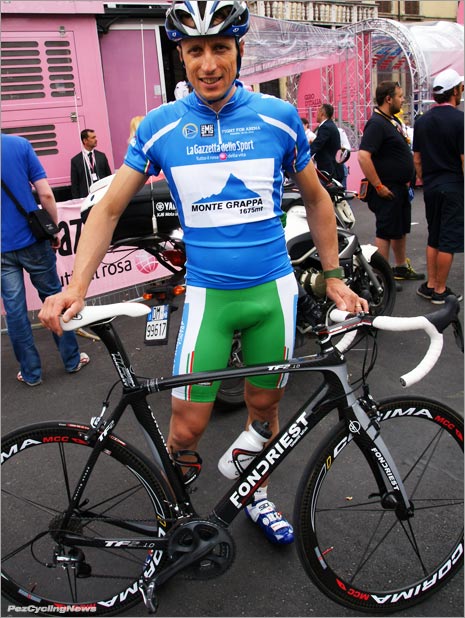 Then it was into the villagio departito, where I bumped into my old pal and stage 4 driver Mino. We met back in 2005 at a hotel near in Arcore, where the Lampre team was staying. Seated beside each other one night for dinner, and each dining alone, we started piecing together a conversation in bits of Italian and English. Since then we’ve met up at every Giro, and Mino usually joins me to drive the car one day, or just hang like we did today. 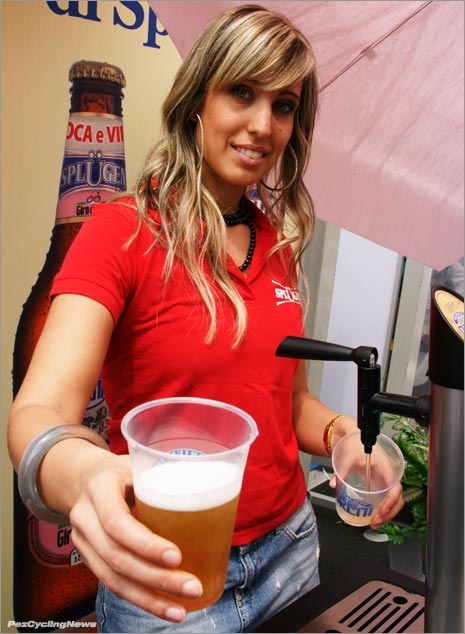 As any good friend should, Mino suggested we partake in one of the free Splugen beer samples. Of course I readily accepted. 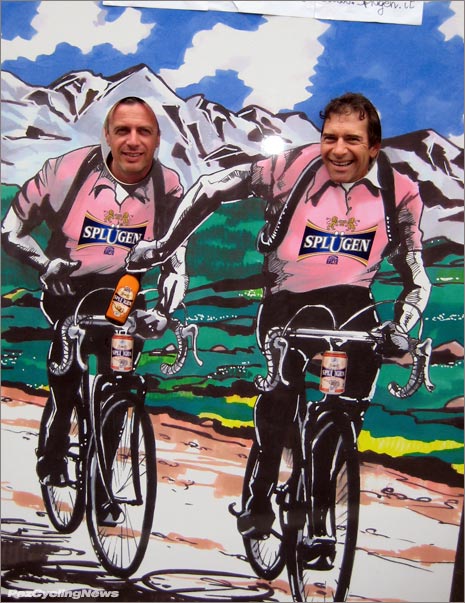 And I assure that this picture was taken on purpose, and before we’d indulged in aforementioned free samples. 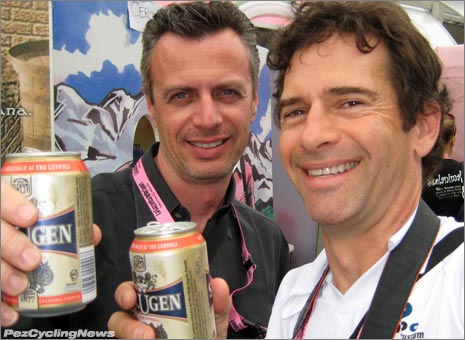 From here the day was about to shift into a whole new phase that first included a ride in the Katusha team car chasing Juan Horrach (arranged on the fly by Mino), then going backstage in the Arena as the big boys took the start ramp, and seeing first hand the emotion that comes at the end of a three week, thousands of kilometers journey around this country.

That story is coming. 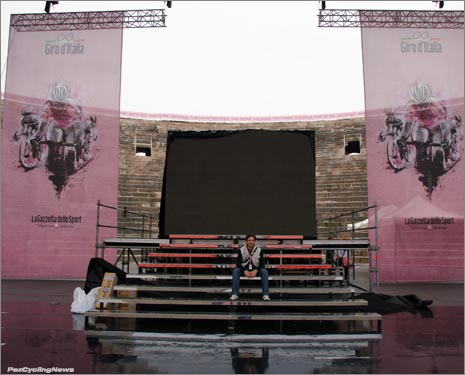 But I’ll leave you with this – here’s the closest I’ll ever get to standing on stage at a grand tour finale. And yes – it’s pretty damn cool.

Thanks for reading.
Ciao a domani –
Pez