Race Report: Richard Carapaz won the first Grand Tour of his career and the Movistar rider is the first Ecuadorian to win the Giro d’Italia. In the final 17 kilometre time trial to Verona, he rode the test of his life. Vincenzo Nibali (Bahrain-Merida) took second and Primoz Roglic (Jumbo-Visma) snatched third place from Mikel Landa (Movistar) with a strong ride. The stage victory surprisingly went to Sunweb’s Chad Haga. 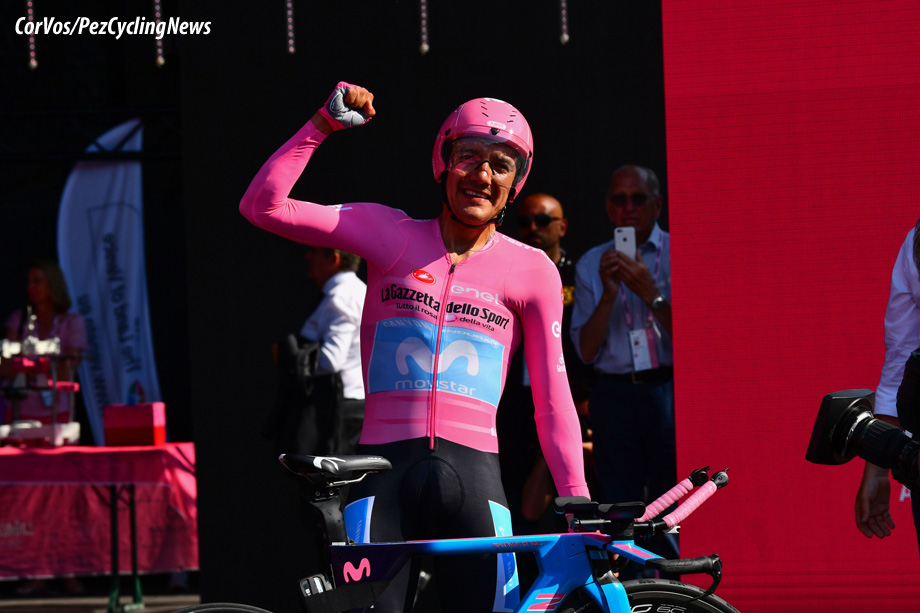 On a beautiful day in Verona’s historic Roman Arena, Richard Carapaz (Movistar and Ecuador) took the 2019 Giro d’Italia from ‘never say die’ home boy Vincenzo Nibali (Bahrain-Merida) and pre-race favourite Primoz Roglic (Jumbo-Visma and Slovenia.) In a Giro of surprises there was another in the result of the final time test over the wide and fast Torricelle Circuit – as used in the UCI Road World Championships road races in 1999 and 2004, with a 4.5km climb averaging 5 per cent gradient – with Chad Haga (Sunweb and USA) taking the victory by four seconds from European Time Trial Champion, Victor Campenaerts (Lotto Soudal and Belgium.) Nibali was best of ‘The Bigs’ on the day, putting three seconds into Roglic – a very impressive display. 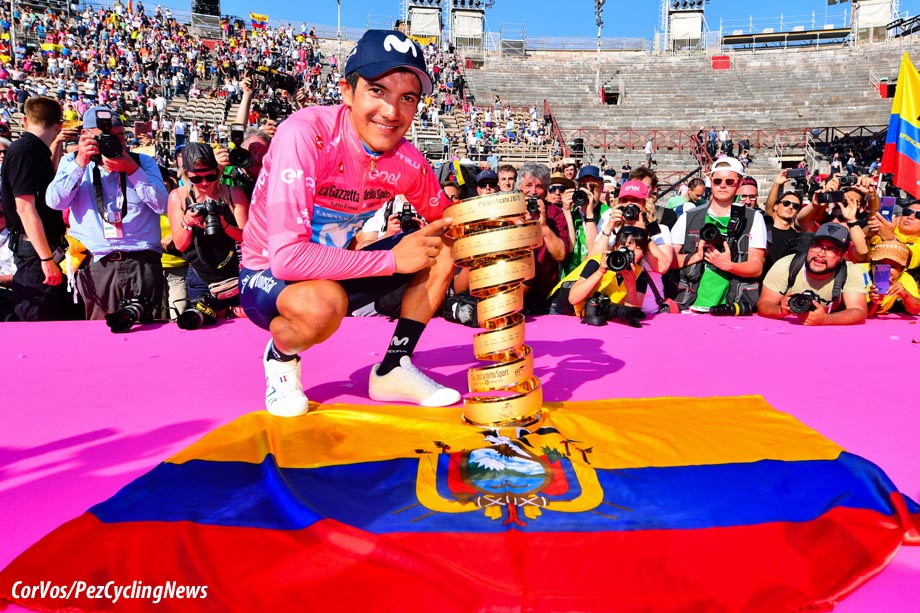 Route
Stage 21 – Verona-Verona ITT 17.0km – total elevation 250m
The final stage is an Individual Time Trial on the Torricelle Circuit (the same as in the World Championships), covered counter-clockwise. The first part is on broad, straight boulevards, followed by an ascent sloping for 4.5km at 5% in a series of steps, on narrower roadway. Split time is taken at the summit, where mountain points are up for grabs. The route then descends for 4km, still on broad and straight roads. The last 3km along the city streets, including some sharp bends, lead all the way to the finish in Piazza Bra and the Verona Arena. 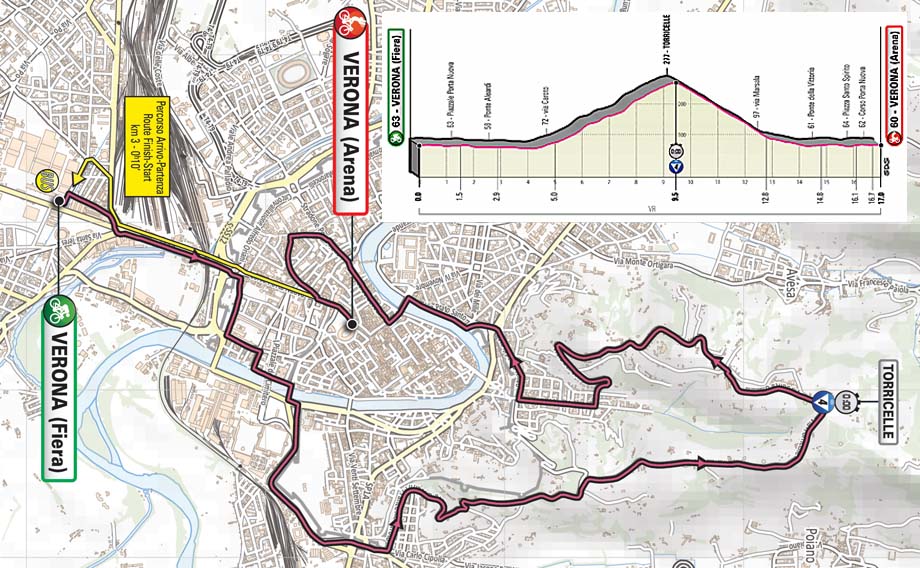 Final kilometres
The final kilometres are on broad, straight urban avenues. The final time is taken in Piazza Bra, before entering the Arena. The home straight is 150m long, on 6.5m wide asphalt road. 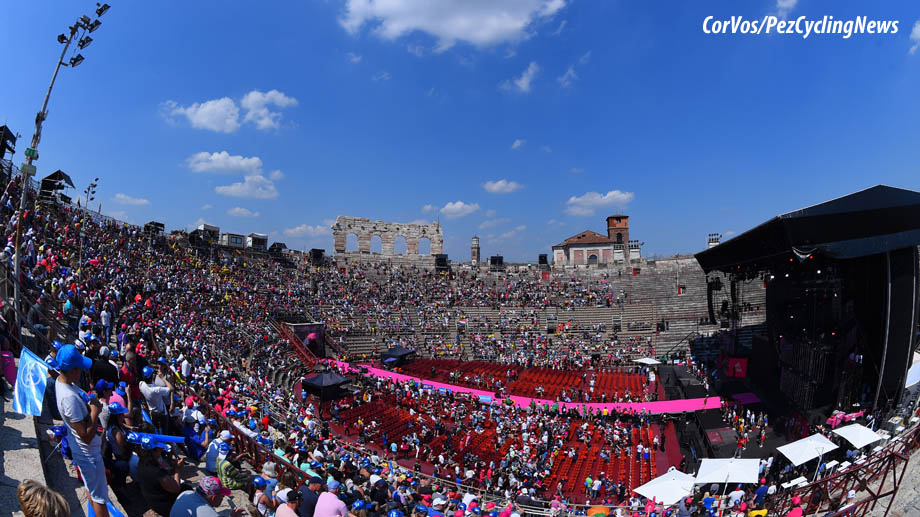 The pre-‘Bigs’ rides surprise was that the leader was NOT Lotto’s Belgian World Hour Record Holder, Victor Campenaerts; rather Team Sunweb Yankee, Chad Haga with 22:07, some four seconds quicker than the Belgian ‘chronoman’. 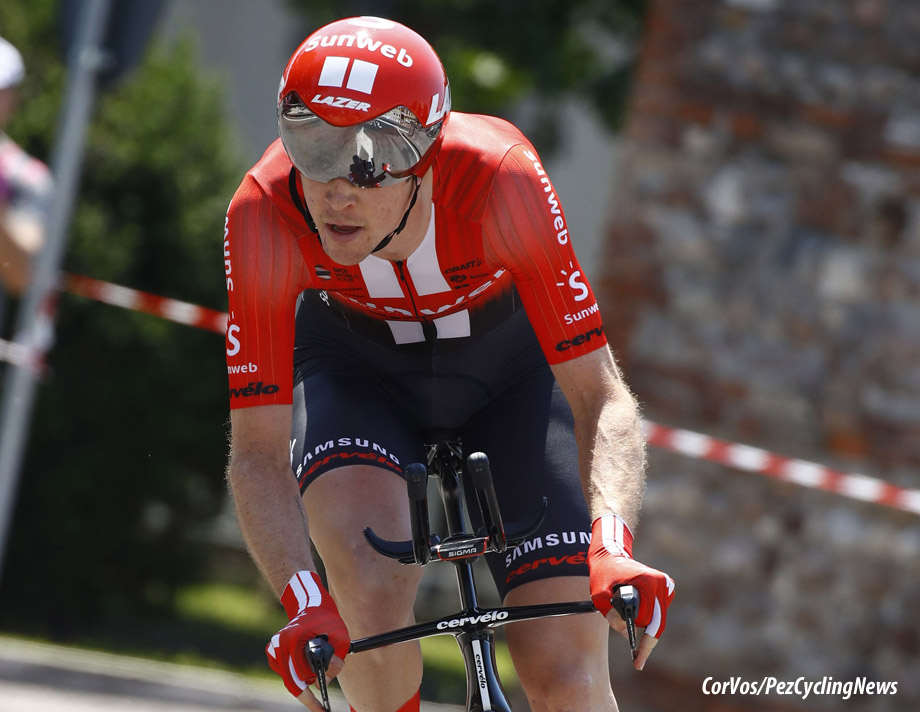 But early specialists apart, today is about the last ten starters and the final fate of those top ten places – and more particularly, top three places. Ilnur Zakarin (Katusha-Alpecin and Russia) 10th on GC, he’s safe there with 11th placed Hugh Carthy (EF Education First and GB) three minutes back – get round, keep it between the hedges is the name of the lanky Russian’s game… 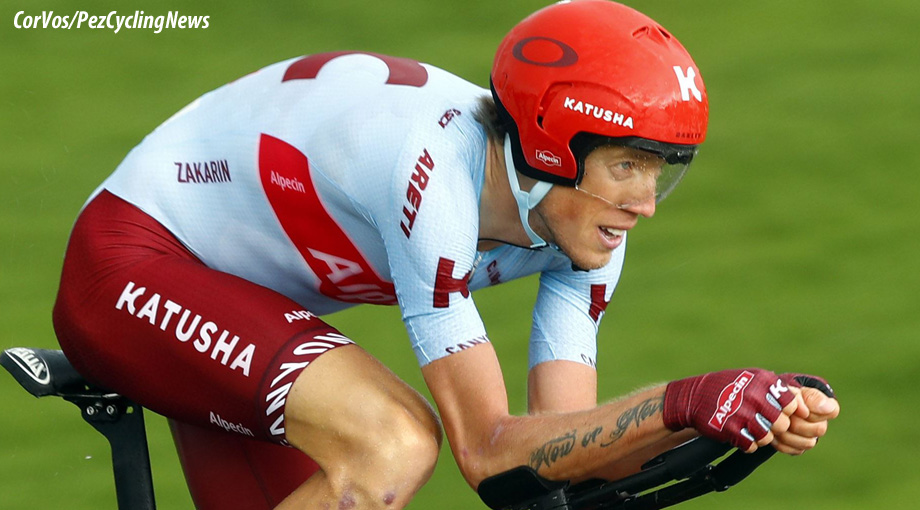 Pavel Sivakov (Ineos and Russia) 9th on GC has three minutes on Zakarin but can he over haul 8th placed Simon Yates (Mitchelton-Scott and GB) who has 1:20 on him?

Unlikely but a great first Giro for Sivakov – the best U23 rider in the world back in 2017 – but ‘disaster’ isn’t too strong a word for Yates’ Giro with not even a consolation stage win. The Aussie team must be so thankful that little Colombian Esteban Chaves has found himself and gave them a stage win. 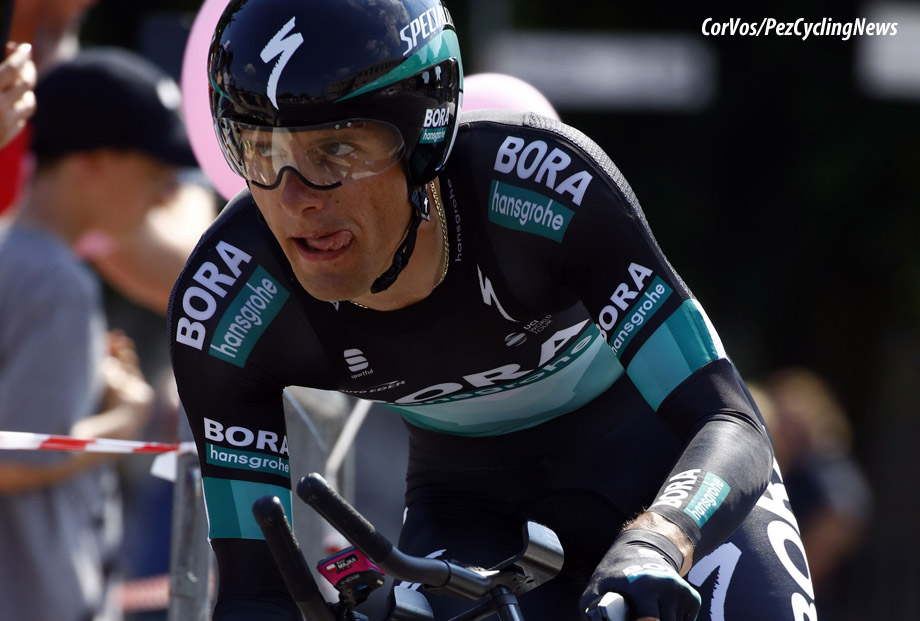 Rafal Majka (Bora-Hansgrohe and Poland) is 7th with 33 seconds on Yates, he should be safe – can he overhaul 6th placed Miguel Angel Lopez (Astana and Columbia) who has 10 seconds on him? It’s possible. In defence of his white young rider jersey Lopez has two minutes on Sivakov, he should be safe there. 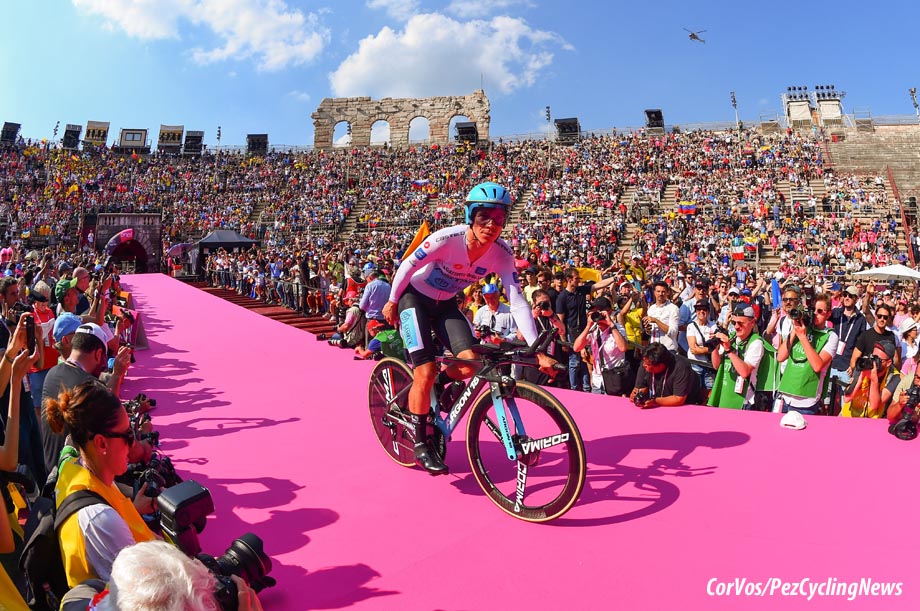 Bauke Mollema (Trek-Segafredo and The Netherlands) is 5th with one-and-a-half minutes on Lopez but little chance of catching his three minute man, 4th placed Primoz Roglic (Jumbo-Visma and Slovenia) who has two-and-a-half minutes on him and is favourite to win the stage in my book. Mikel Landa (Movistar and Spain) is 3rd but has only a 23 second buffer on Roglic and may well finish just off the podium. 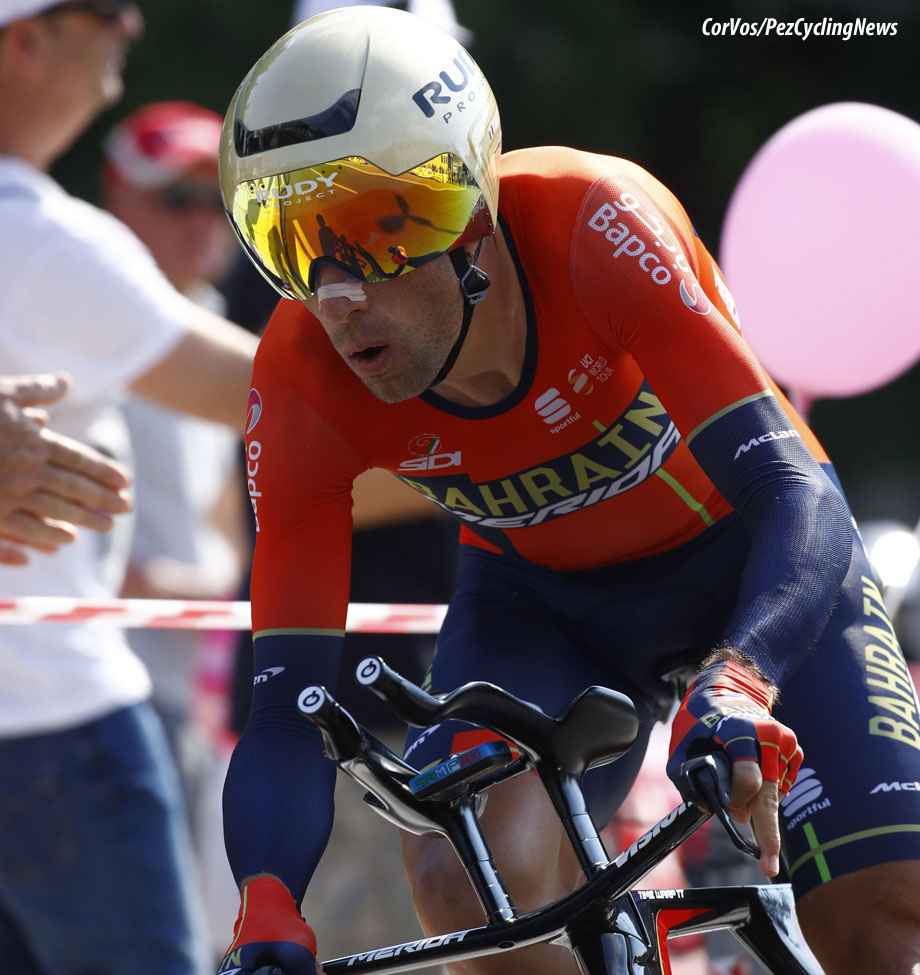 Vincenzo Nibali (Bahrain-Merida and Italy) sits second @ 1:54 but should be safe with even chrono specialist Roglic unlikely to take enough time from him. And on zero seconds, the man who has amazed us all, Richard Carapaz (Movistar and Ecuador) – it’s highly unlikely Nibali can pull that 1:54 back. 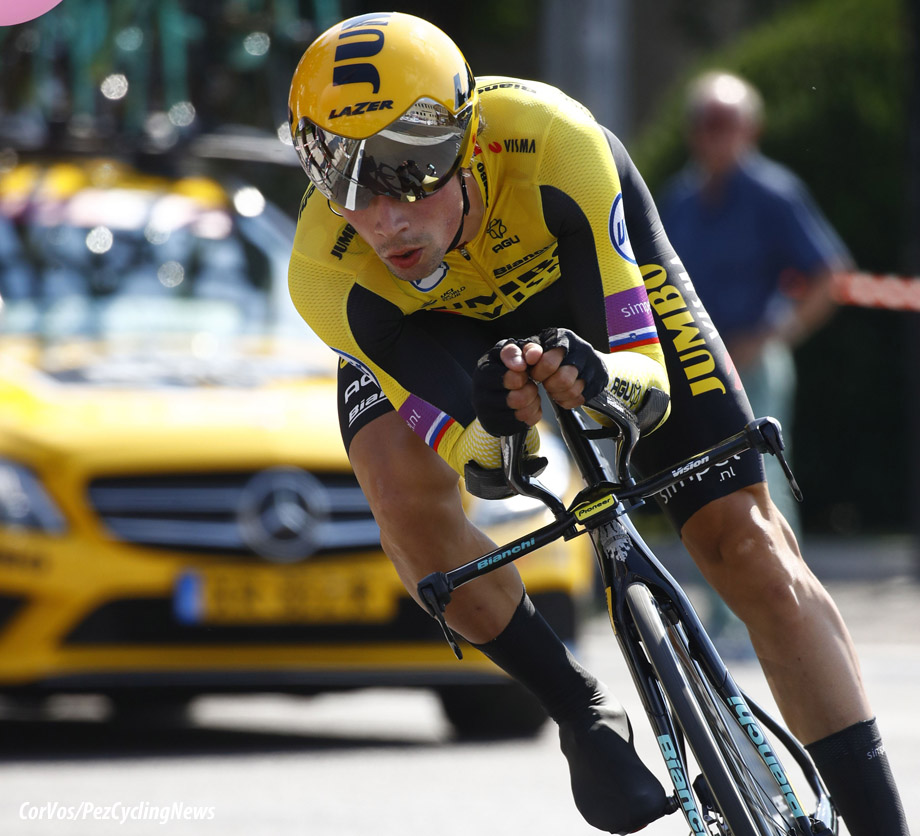 Roglic is taking time from Landa with every turn of the pedals on the flat approach to the hill but Landa can climb and will stop the rot up the Toricelle for sure. At the line, Sivakov and Yates battle home over the cobbles – neither on a ‘good one’ but enough done to defend their spots. Majka is going well and may just be on course to usurp Lopez? Roglic is on the decent now but down on Haga at the check point. Of course, Roglic and The Bigs were going way deep yesterday whilst Haga and Campenaerts were doing as little as possible in the grupetto. 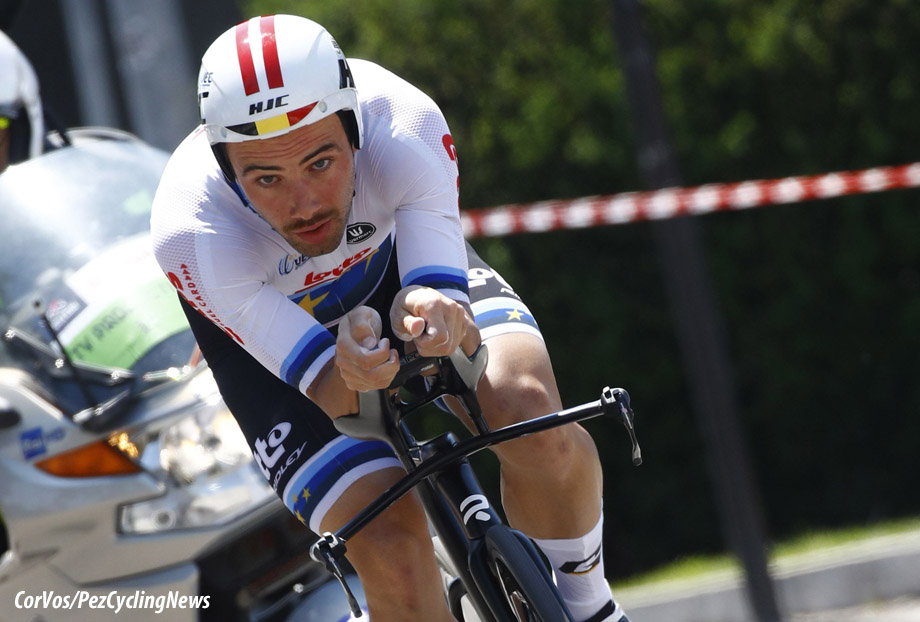 Nibali is cheered to the rafters by the tifosi with Carapaz riding like a man possessed three minutes behind him. Landa crests the climb, he’s lost some 20 seconds to the Slovenian, who should take more time on the descent.

Nibali is smooth on the climb and going nicely – up on Roglic at the check – impressive. Carapaz is no stylist, very physical, battering that Canyon into submission on the climb. Roglic is flying through the streets of Verona – will it be enough? No! Not to win the stage – but there’s still the GC podium. 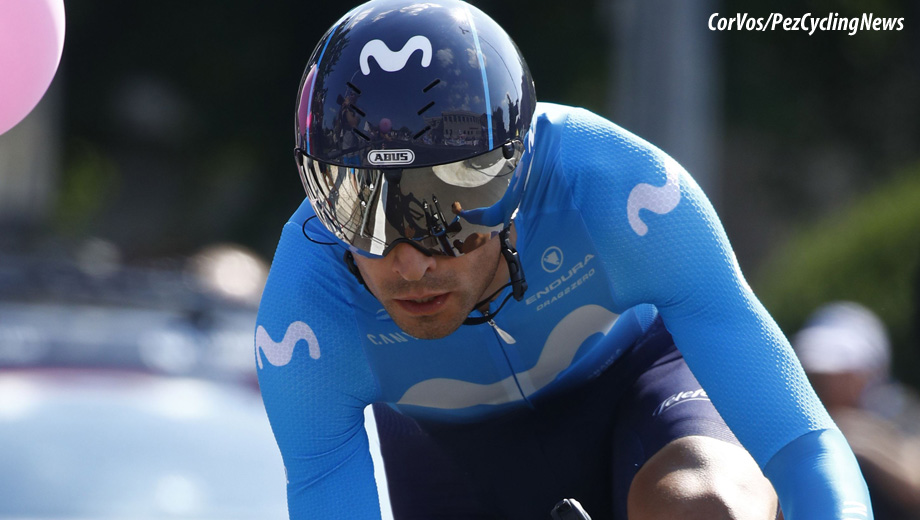 It’s Haga’s day, unless Landa, Nibali or Carapaz can pull a big rabbit from the hat. Landa is off the podium – Roglic takes third on final GC. Nibali is fighting all the way, big geared with not too much upper body movement. Haga can’t watch the Italian come home – but Nibali doesn’t match the American’s time, the stage belongs to the man who as well as riding a mean test, plays a neat piano. Chapeau Chad! 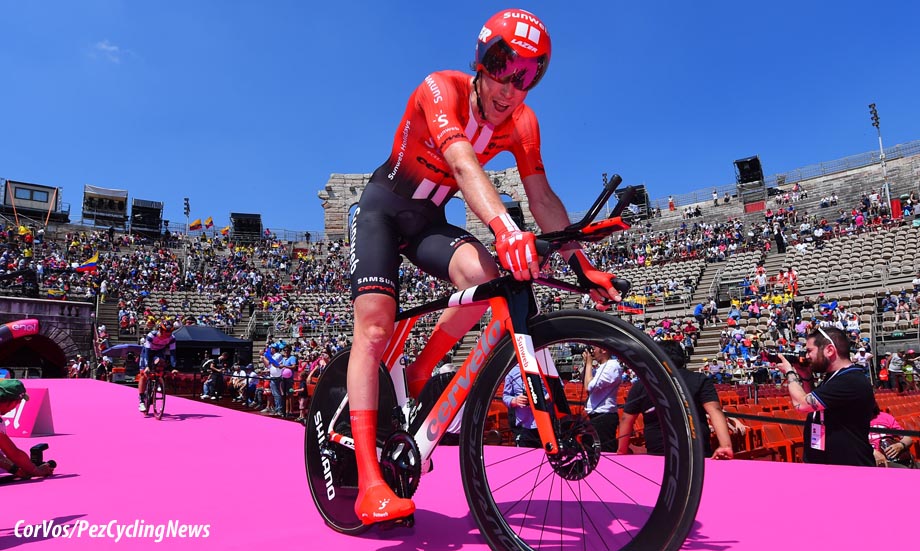 Carapaz thrashes home, he’s lost time to Nibali but it’s his Giro. Ecuador – the UCi ‘Mondialisers’ will be ecstatic. The top 10 has one change, Majka hops over Lopez but the Colombian stays in white. 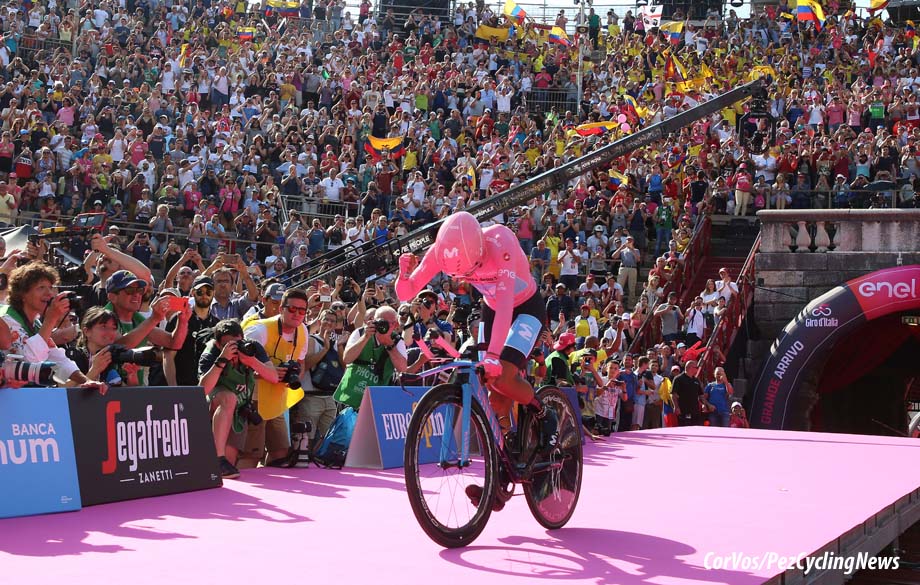 I was wrong and I was right about this Giro; I said Vincenzo couldn’t win, ‘the new boys’ would be too strong – I got that right unfortunately but got the new boys names wrong – ‘Richard’ not ‘Adam’ or ‘Primoz.’ 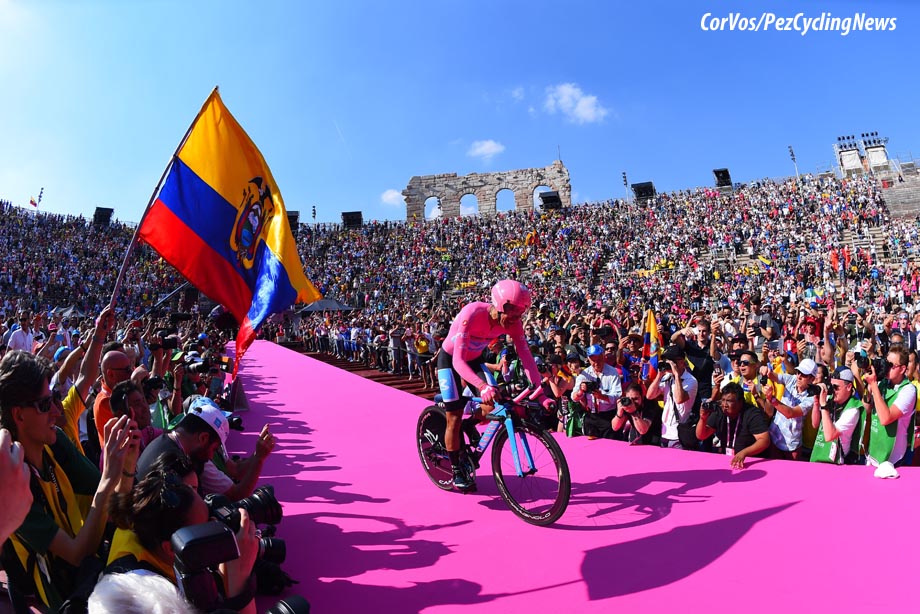 Final overall winner, Richard Carapaz (Movistar): “This is the biggest moment of my sporting life. In this final time trial I just suffered from start to finish until I reached the arena of Verona. It’s fabulous to win the Giro d’Italia.” 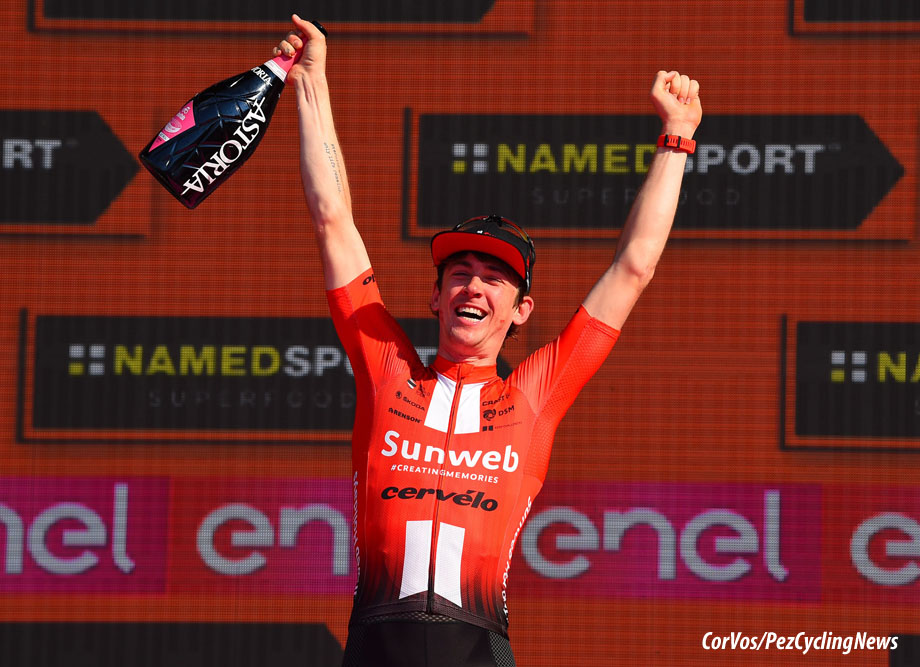 Stage winner Chad Haga (Sunweb): “This is my first World Tour win but I started this morning believing strongly that I could win. I saved my legs these past few days. Watching Roglic and Nibali on TV, I had to convince myself that they were tired. It’s a huge emotion. I’m speechless.” 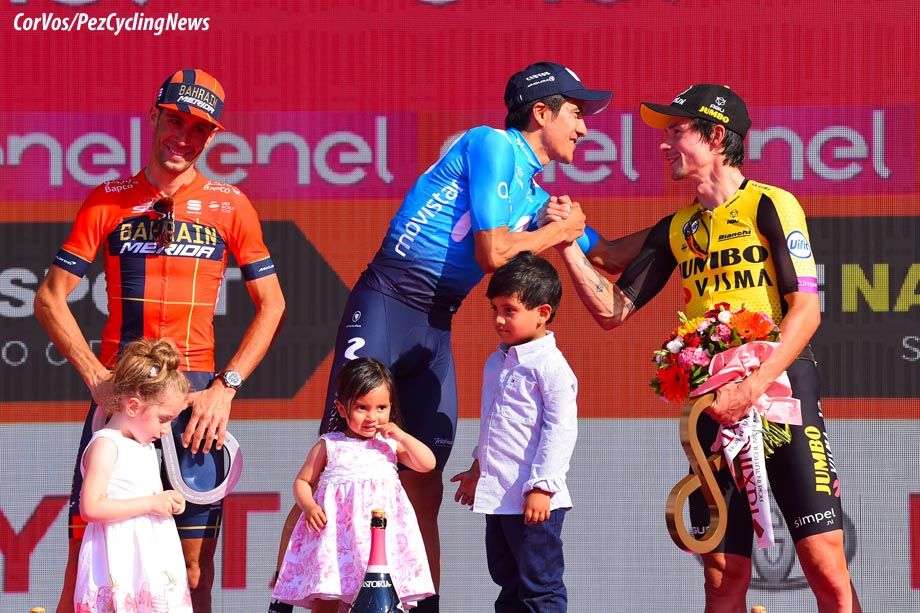