Race Report: In the expected bunch sprint, Lotto Soudal’s Caleb Ewan won the 11th stage of the Giro d’Italia. In the gallop for the finish line in Novi Ligure he was to fast for Tuesday’s winner Arnaud Démare (Groupama-FDJ), with Pascal Ackermann (Bora-Hansgrohe) third and Elia Viviani (Deceuninck – Quick-Step) fourth. This was the Australian’s second stage win after victory in stage eight. Another day in pink for Valerio Conti (UAE Team Emirates). 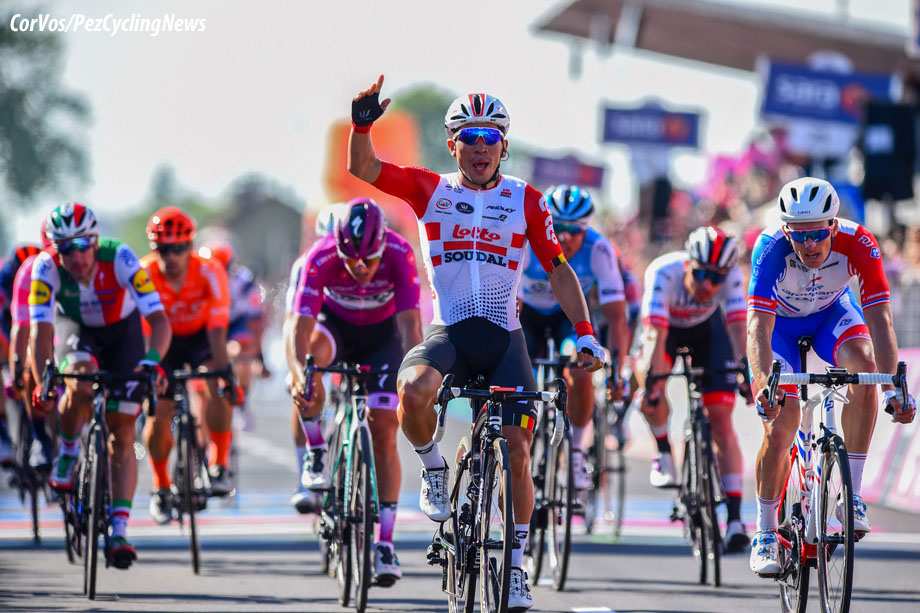 For the second day in a row the stage profile was flat and made for the sprinters. From Carpi the stage headed to Novi Ligure, where Italian cycling legend Fausto Coppi lived most of his life. This was also the birthplace of that other Campionissimo, Costante Girardengo. In short, a place with cycling history. The expected mass sprint was on the menu. 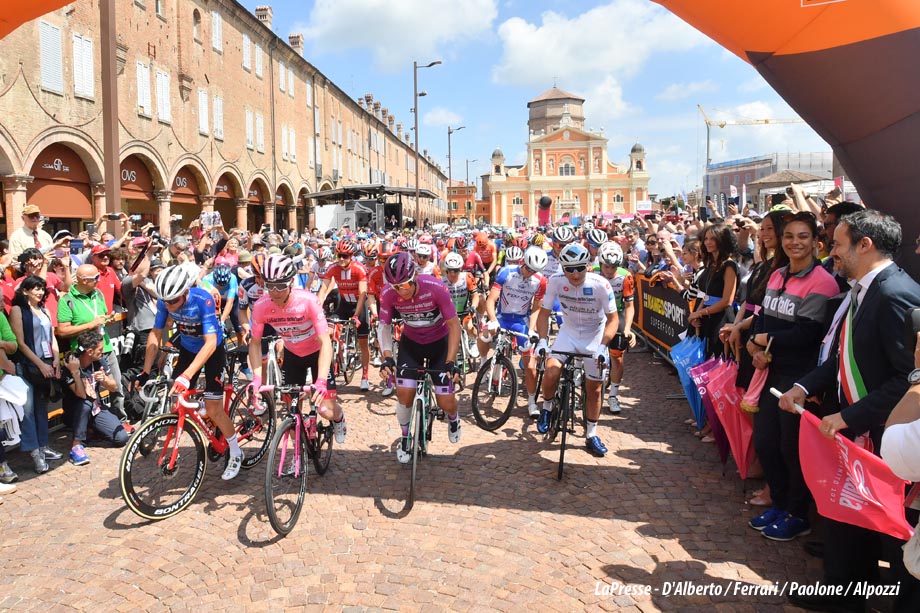 The start in Carpi

Route:
Stage 11 – Carpi-Novi Ligure 221km – total elevation 400m
A pan-flat stage to the edge of the Po Valley. After Casteggio, the route follows the traditional itinerary of Milano-Sanremo, up to 3km from the finish. Starting from Carpi, the route first heads towards Reggio Emilia. After crossing the town, it takes the ss. 9 “Via Emilia” all the way to Piacenza, following a straight course. Past Piacenza, the route takes the former Statale Padana Inferiore all the way to the finish, passing through several cities that have often featured regularly in the Giro route, and in the Milano-Sanremo finale. 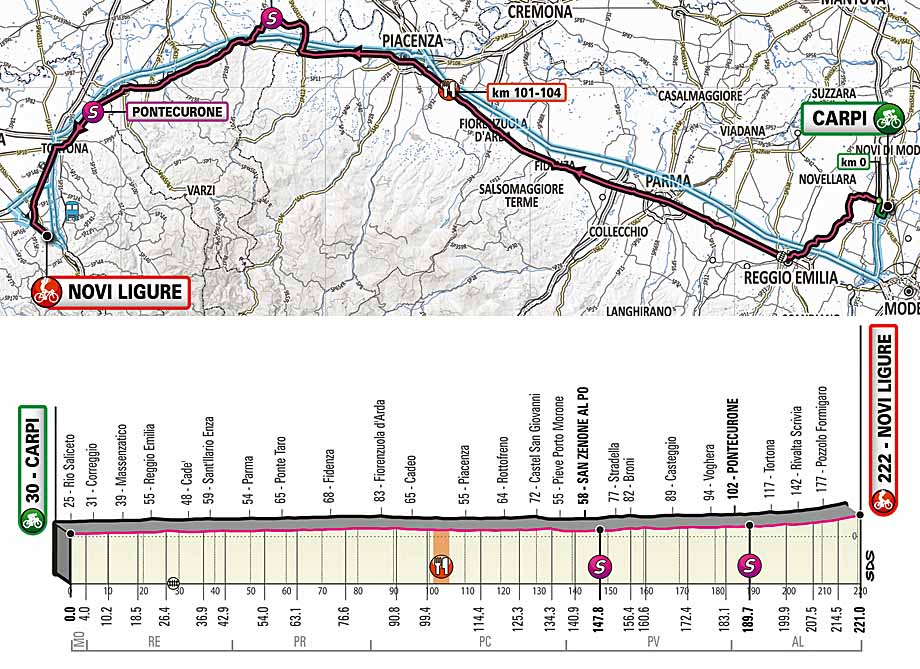 Final kilometres
The last 3km are virtually straight, with some roundabouts, but not requiring major diversions. The last bend is 3,000m from the finish line, then the home straight is 2,800m long, on 7.5m wide asphalt road. 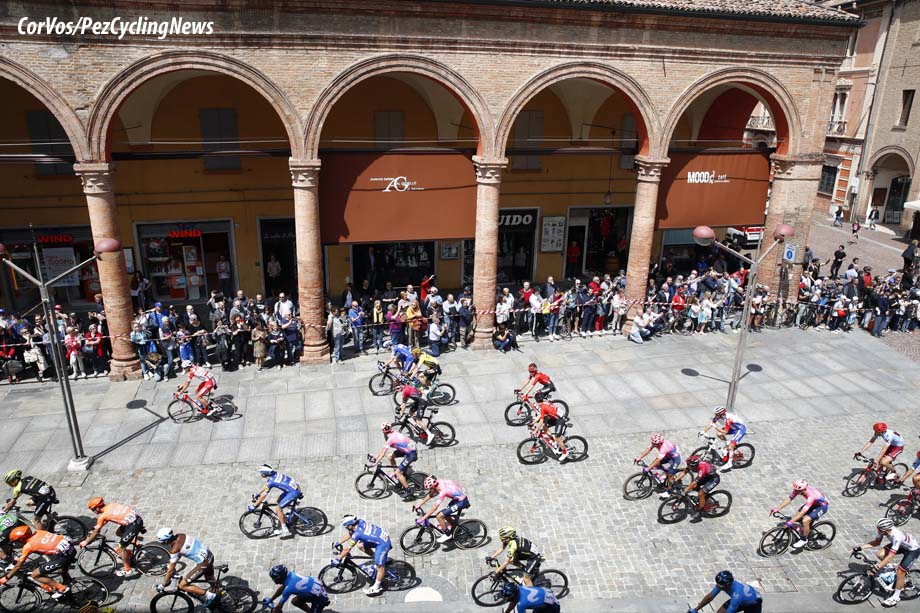 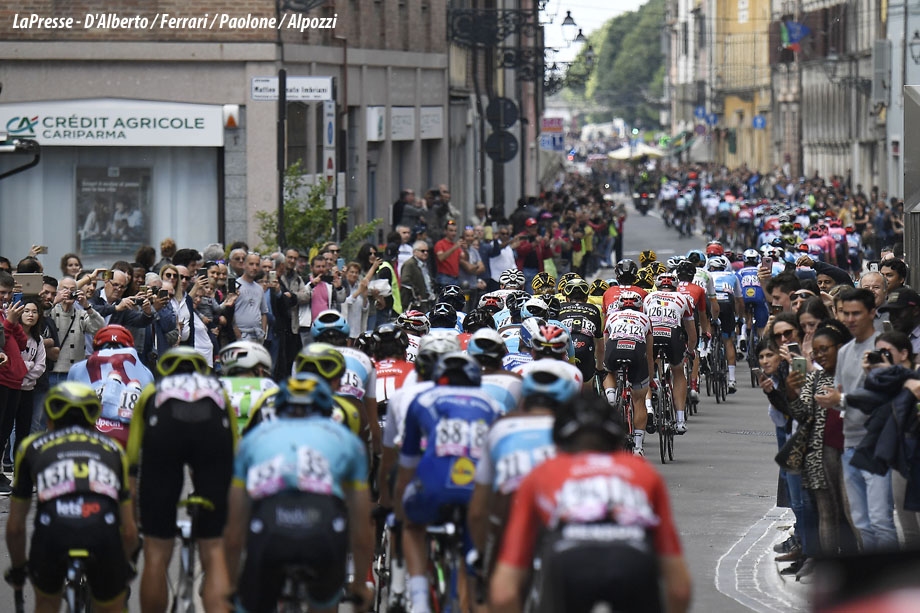 The stage started without Matteo Moschetti; the Trek-Segafredo sprinter could not start after crashing in yesterday’s stage. Pascal Ackermann also crashed, but the wearer of the Maglia Ciclamino was able to continue. Elia Viviani, Caleb Ewan and his main competitor for the points jersey, Arnaud Démare, would be the battered German’s main opposition today. 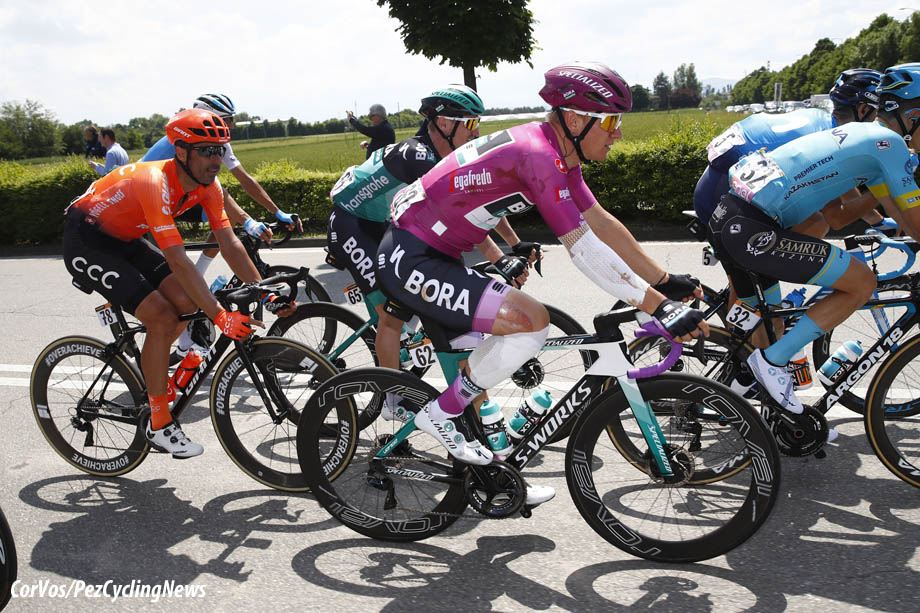 After his crash on Tuesday, Pascal Ackermann started stage 11 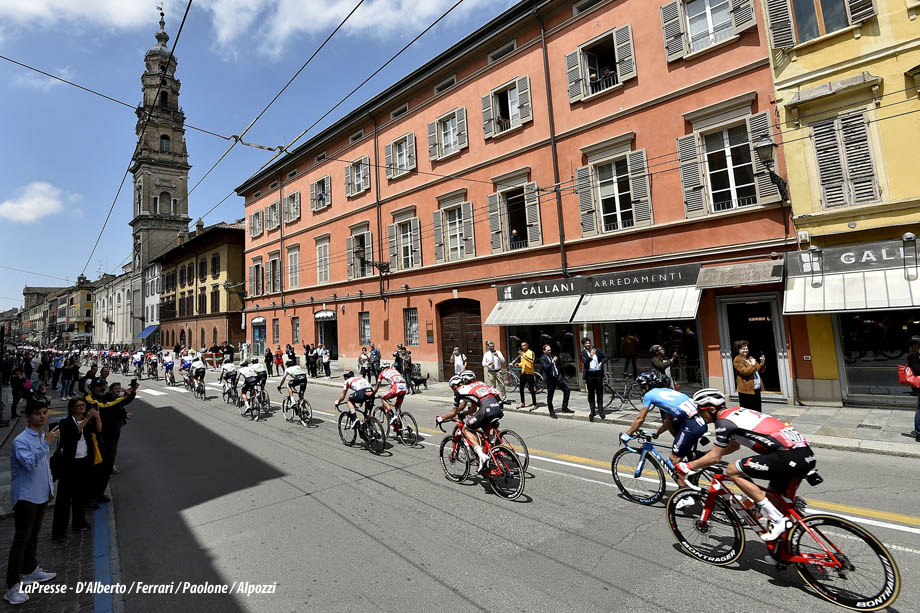 Again the early break went in the first meters. Damiano Cima, Marco Frapporti and Mirco Maestri – now well-known faces in the long escape – gave their Nippo-Vini Fantini-Faizanè, Androni Giocattoli-Sidermec and Bardiani-CSF teams the TV time they pay for. The three Italians are also leaders in the Pinarello Competition, the ranking for the riders with the most kilometres on the attack. 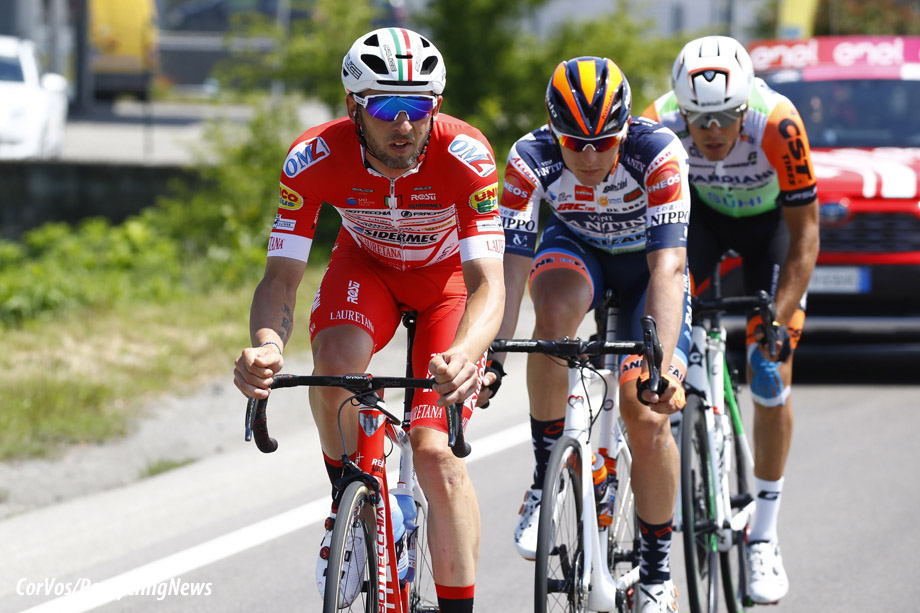 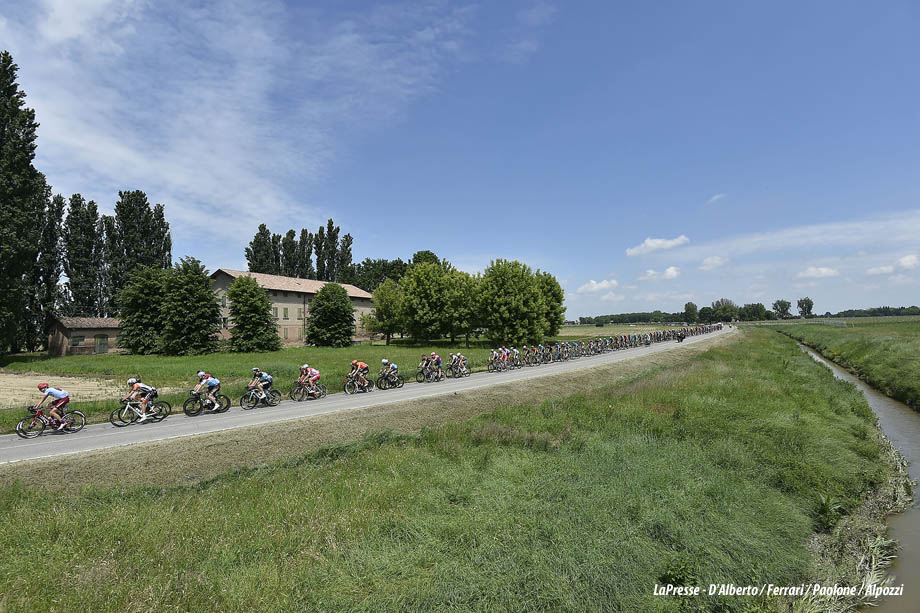 After 20 kilometres the leaders already had 6 minutes. It was then the teams of the sprinters set the pace at the front of the pack. Groupama-FDJ (Démare), Lotto Soudal (Ewan) and Deceuninck – Quick-Step (Viviani) all put a man to work and they gradually brought the lead down. By the halfway point the gap had fallen to around 4 minutes. 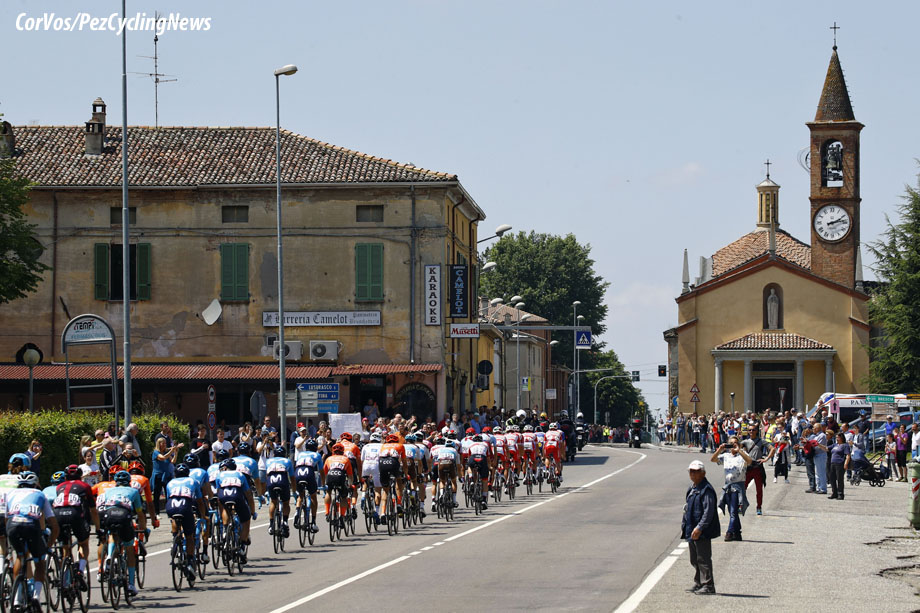 Another day in the peloton 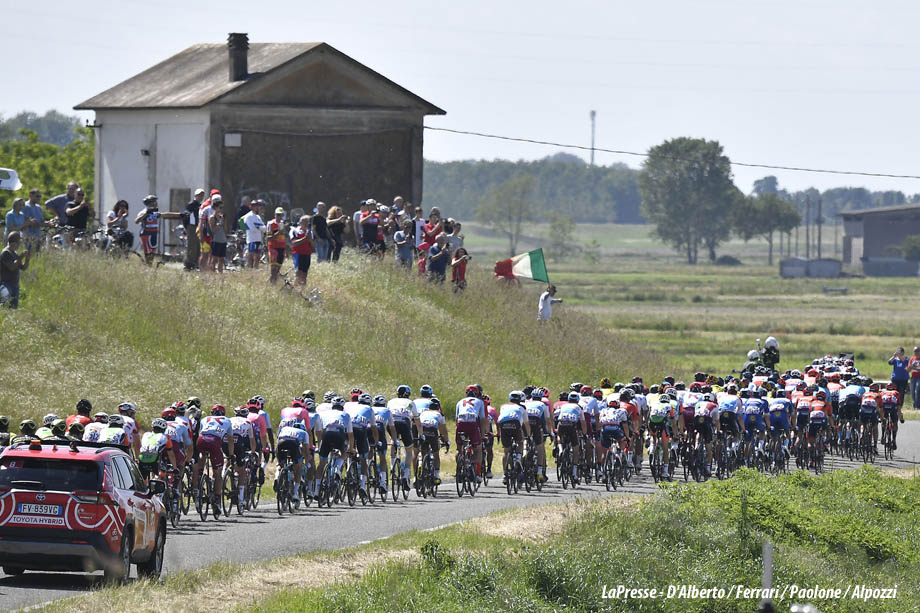 The time difference at the first intermediate sprint was more than two minutes, but there was still a battle for the purple jersey. Teammates Rüdiger Selig and Pascal Ackermann tried to hold off Arnaud Démare in San Zerona, but the Frenchman was the fastest and took the virtual points classification. 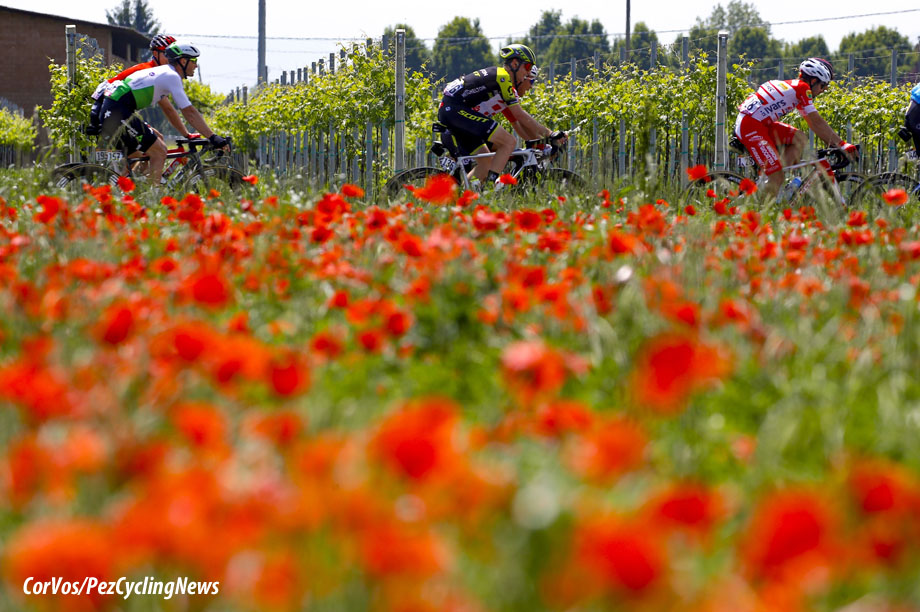 For Cima, Frapporti and Maestri saw their lead continue to decline. At 26 kilometres from the finish line the three Italians day out was over, and with a shake of the hands they were caught. From then on it was the sprinter teams who led the peloton to the finalé for one of the last bunch sprints till next week. 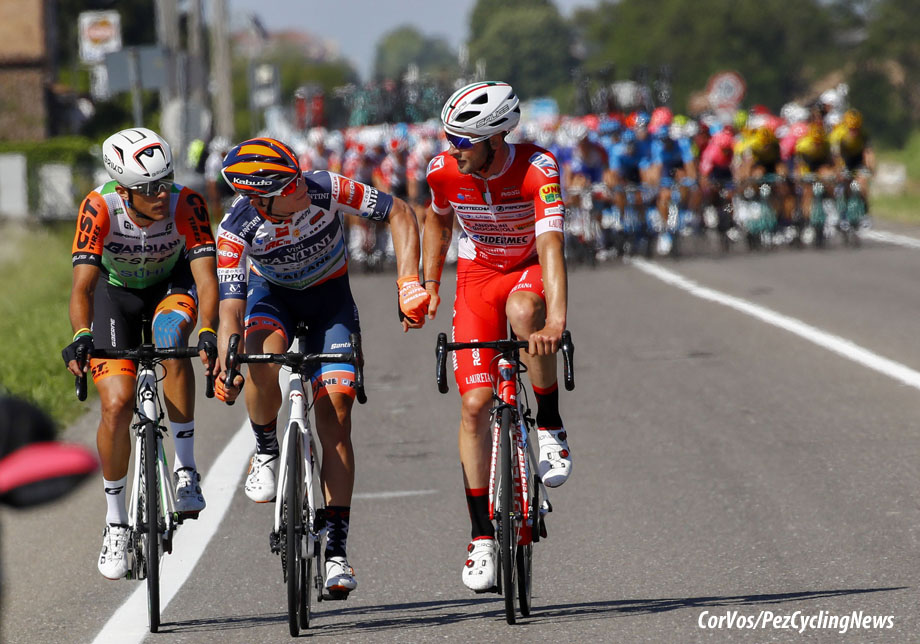 Day over for the break 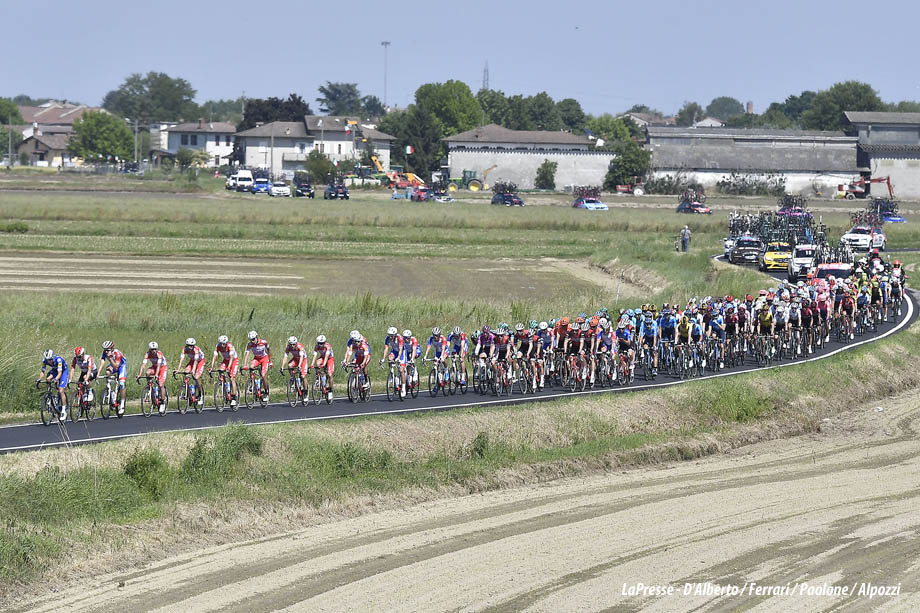 Teams like Jumbo-Visma, Mitchelton-Scott and Movistar tried to manoeuvre their GC men into safe positions, Bora-Hansgrohe, Deceuninck – Quick-Step and Lotto Soudal placed their sprinters for the finish. The injured Ackermann pushed through in the last ten kilometres, showing his intent to compete for a third stage success. 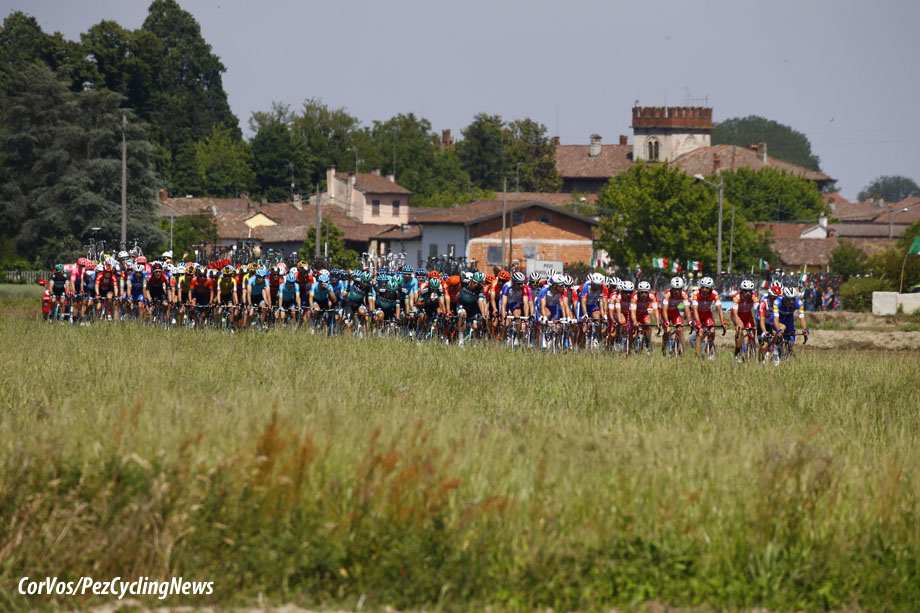 The bunch pushed on to the finish

Christian Knees (Ineos) went solo 4 kilometres from the finish line, but the CCC teammates of Jakub Mareczko brought him back. There was still 3 straight kilometres to the finish and Groupama-FDJ provided an impressive lead-out for leader Arnaud Démare, who pursued his second victory in a row, although the French team was overwhelmed by Bora-Hansgrohe. 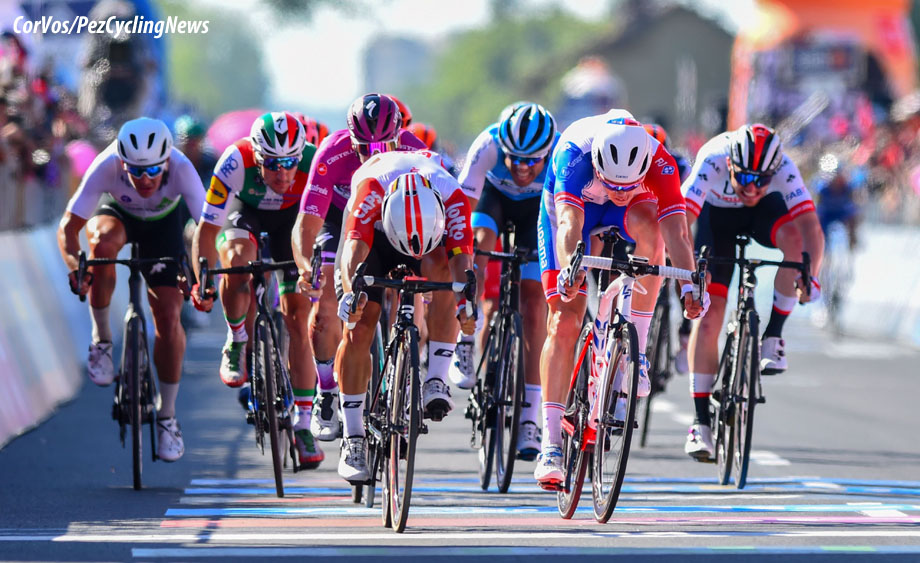 The Australian was just too fast

Pascal Ackermann was the first to start the sprint, but Caleb Ewan came past on his right hand side for the win. This maybe the last ride from the Australian in the Giro, because after today he will prepare for the Tour de France. Behind him, Démare finished in second place, Ackermann came in third. Again Elia Viviani was stranded in fourth place. 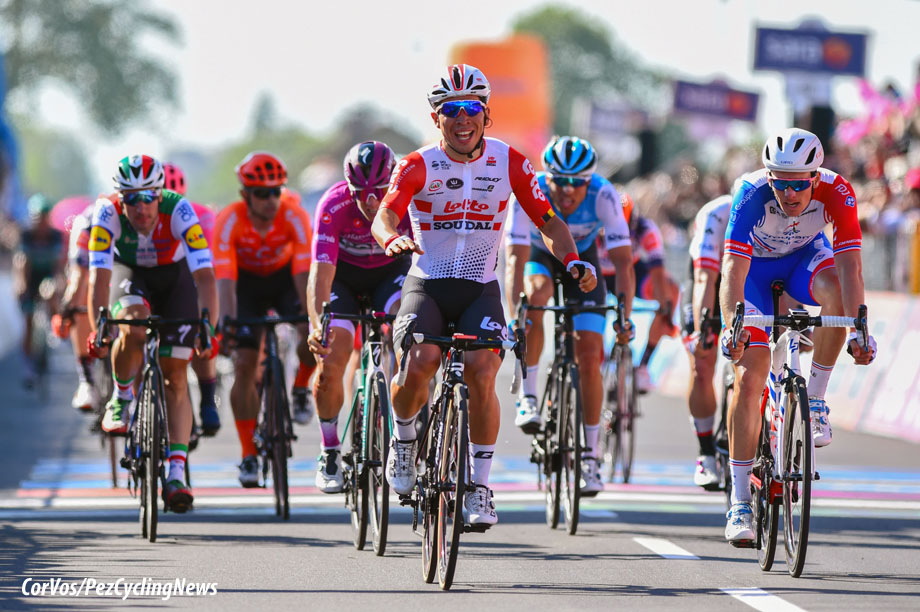 Valerio Conti did not get in trouble and kept the pink leader’s jersey. The Italian still has an overall lead of 1:50 over Primož Roglič (Jumbo-Visma). Nans Peters (AG2R-La Mondiale) is in third place at 2:21. 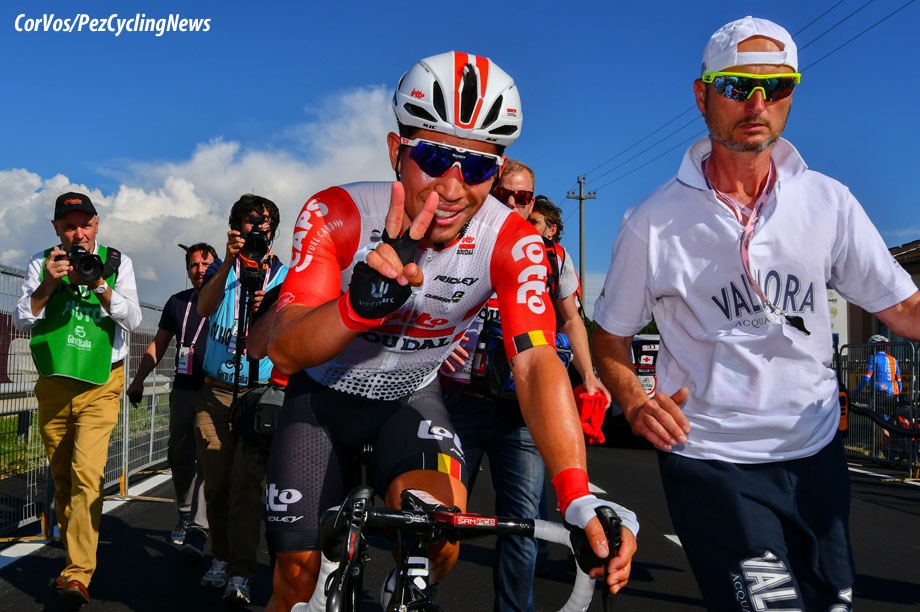 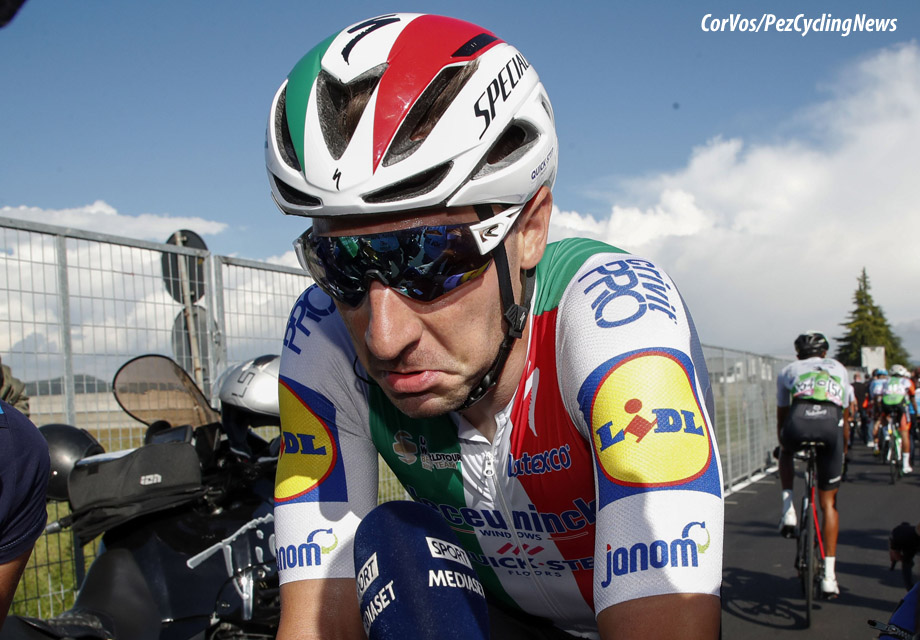 Not so happy Italian champion

Stage winner, Caleb Ewan (Lotto Soudal): “A longer stage today suited me a bit better than yesterday with the other sprinters having sore legs. I followed Pascal Ackermann’s wheel because I knew he’d still be good [despite his crash yesterday]. He had a good lead out so it was a good wheel to sit on. I timed it right. I always considered myself one of the top sprinters. Two stage wins prove that I am really one of them.” 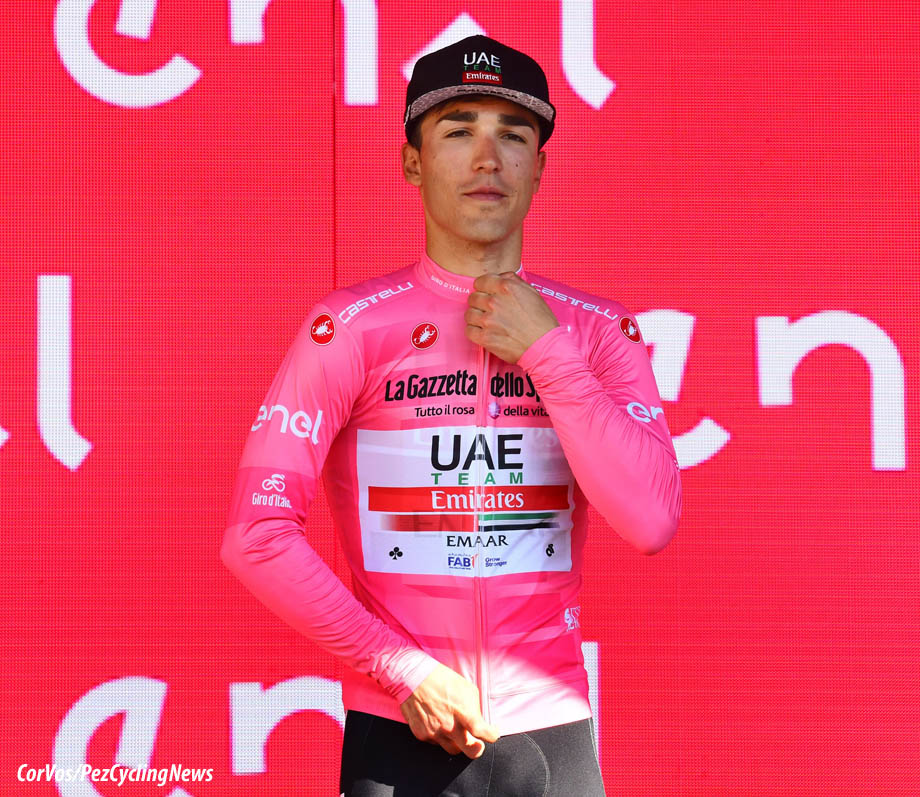 Race leader, Valerio Conti (UAE Team Emirates): “It was a long and sunny stage. So I enjoyed it very much. Tomorrow it’ll be harder to keep the jersey because the main climb is a hard one. But I want to keep the Maglia Rosa tomorrow also.”