Race Report: No Gavia on stage 16 of the Giro d’Italia on Tuesday, but there was enough excitement. Vincenzo Nibali (Bahrain-Merida) threw his cards on the table on the Mortirolo to blow the GC apart, but Overall leader Richard Carapaz (Movistar) was still on his wheel. Primož Roglič (Jumbo-Visma) and Simon Yates (Mitchelton-Scott) lost time. The stage victory went to KOM Giulio Ciccone (Trek-Segafredo), who beat Jan Hirt (Astana) to the line. 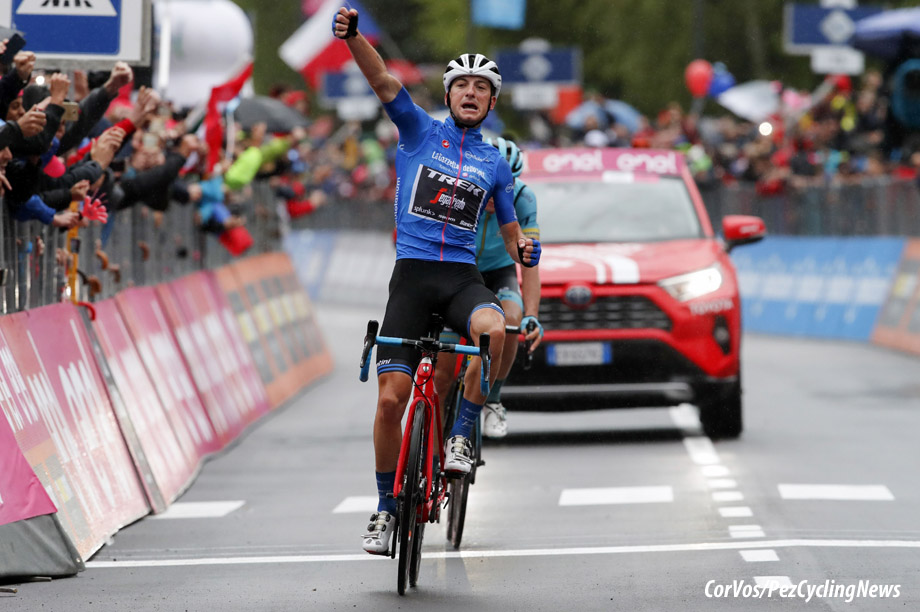 It was to be the Queen Stage of the 2019 Giro d’Italia, but the weather gods decided otherwise. Due to the heavy snowfall the peloton could not be sent over the Gavia, so we “only” had the dreaded Mortirolo. The day was still hard enough to cause mayhem. The week of truth has begun. 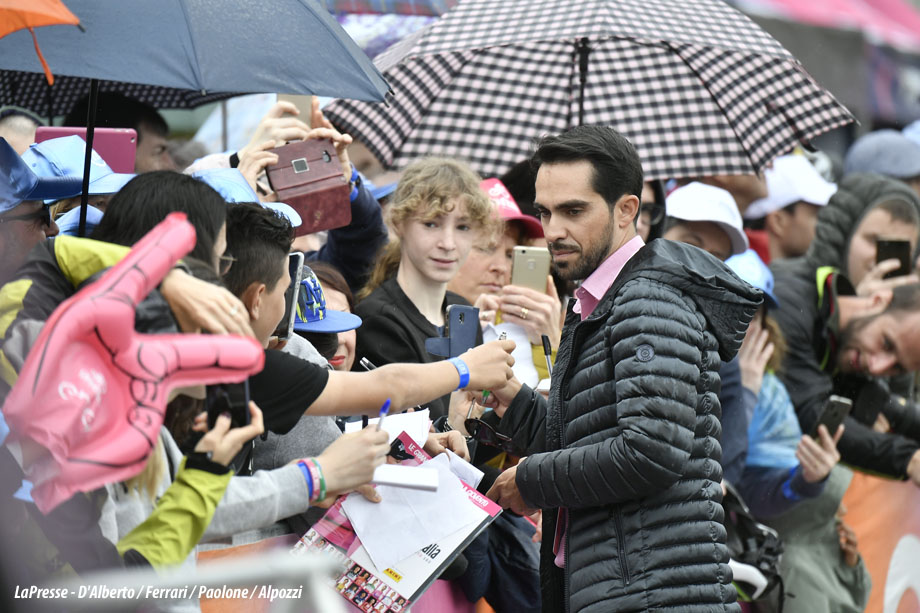 Alberto Contador meets his fans at the start in Lovere 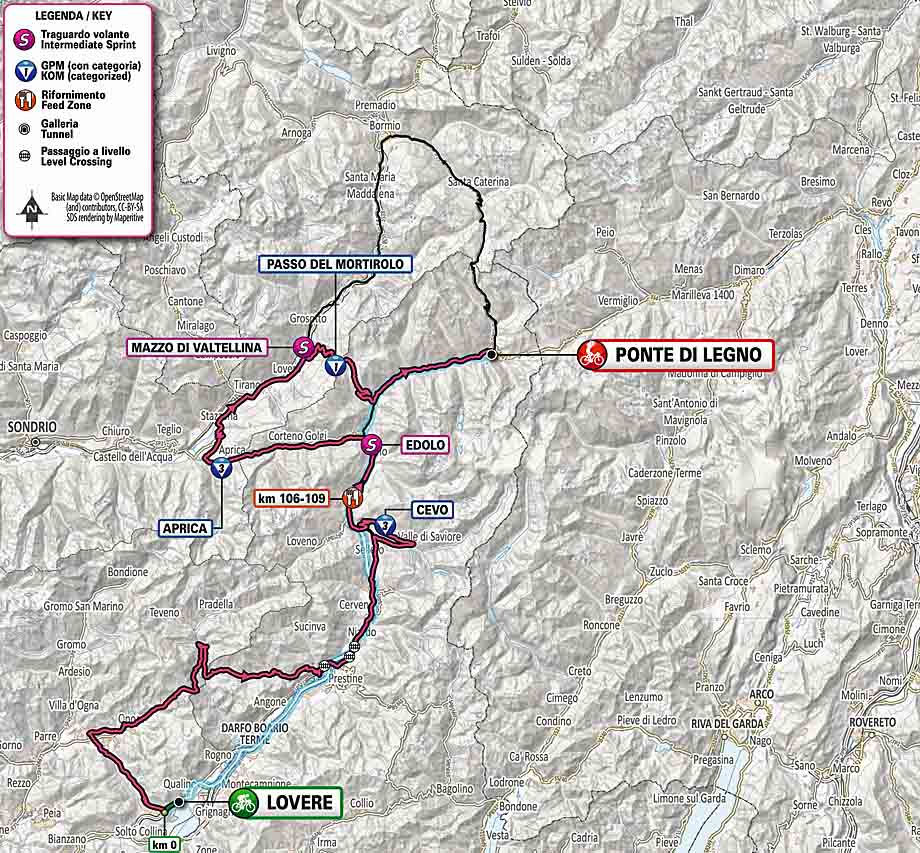 From there the race faces the unprecedented ascent of Cevo and, after climbing up to Edolo, the race turns towards Aprica, the second third category climb of the day. Descent in Valtellina as far as Mazzo, clearing the Mortirolo from the “conventional” side, with maximum 18% gradients. After dropping into Monno, the route goes up again with shallow average gradients (3-4%) for the final 15km, all the way to the finish. 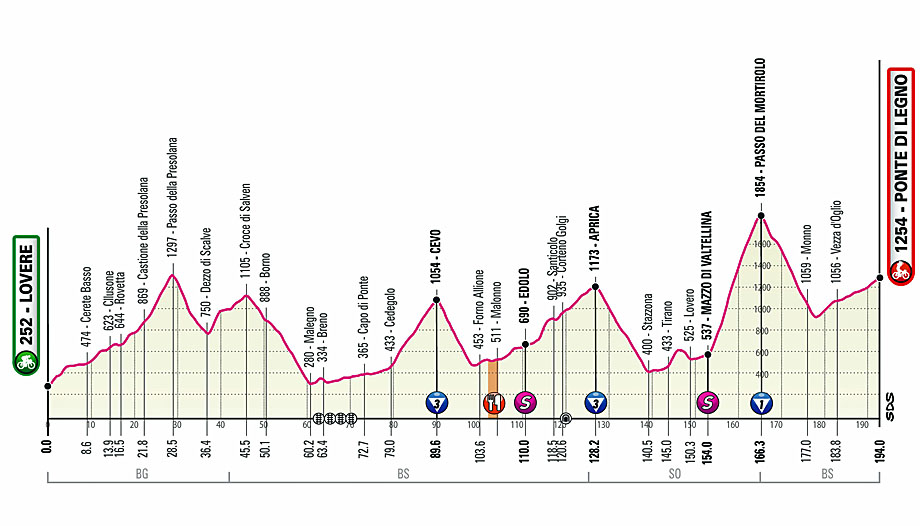 Final kilometres
The final kilometres in urban Ponte di Legno are played out on narrower roads, with many 90-degree bends leading into wider avenues, heading for the finish. The home straight (300m) is on 6m wide asphalt road. 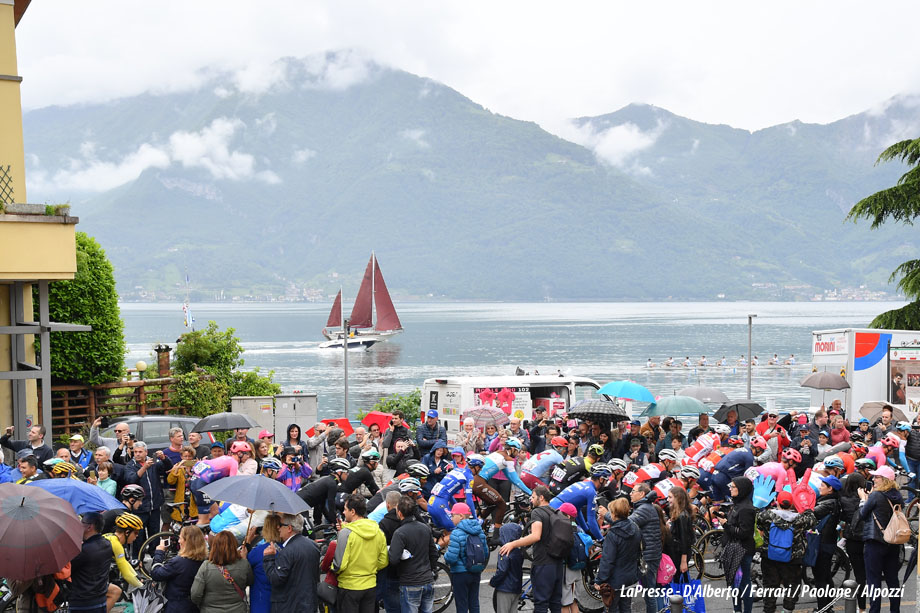 Another tough day ahead 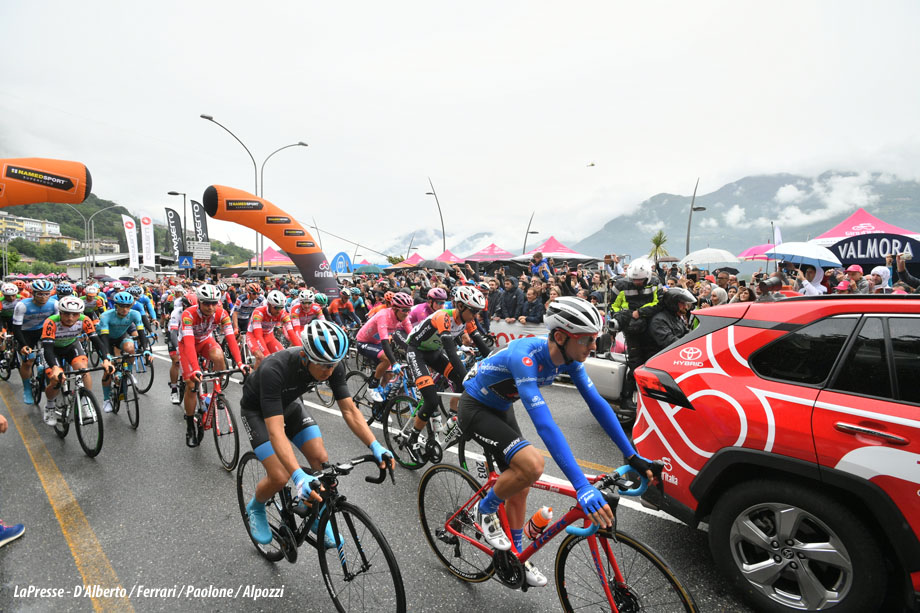 Climbs of Cevo, Aprica and the Passo del Mortirolo on the menu

From the start the route slowly climbed towards the Passo della Presolana. Simon Yates and Miguel Ángel López appeared to have a plan, as Mitchelton-Scott and Astana went on the attack. The Spanish Movistar team of Richard Carapaz and Mikel Landa tried to keep things together, but eventually 22 riders escaped. López, Yates and Vincenzo Nibali had several teammates in the lead, so the group was allowed to go. Astana had Pello Bilbao, Jan Hirt and Davide Villella, the Kazakh team were in control at this point. Bahrain-Merida had Damiano Caruso and Antonio Nibali, while Mitchelton-Scott had Mikel Nieve and Christopher Juul-Jensen up front. The others were: Koen Bouwman, KOM Giulio Ciccone, Joe Dombrowski, Fausto Masnada, Mattia Cattaneo and Andrey Amador, who was the only Movistar rider in the early break. 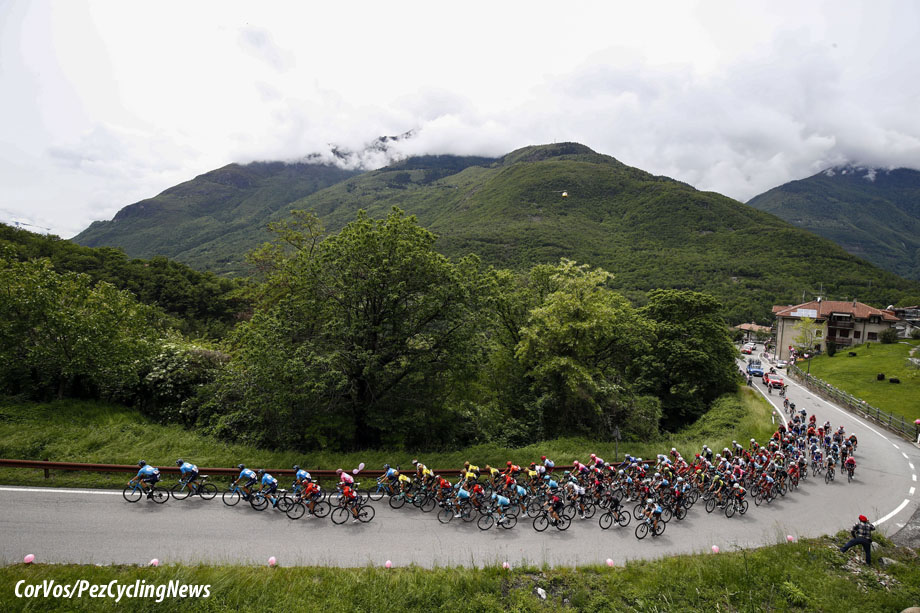 Low cloud on the mountains for the peloton

The escape managed to build up quite a lead, but not too much, some of the riders were too dangerous for that, so Movistar kept them to 5 minutes. On the Cevo, after 89.6 kilometres, Ciccone took the KOM points. The action was going to come on the Mortirolo. Francisco Ventoso (CCC) did not want to wait and attacked on the descent of the Aprica, but was caught later. 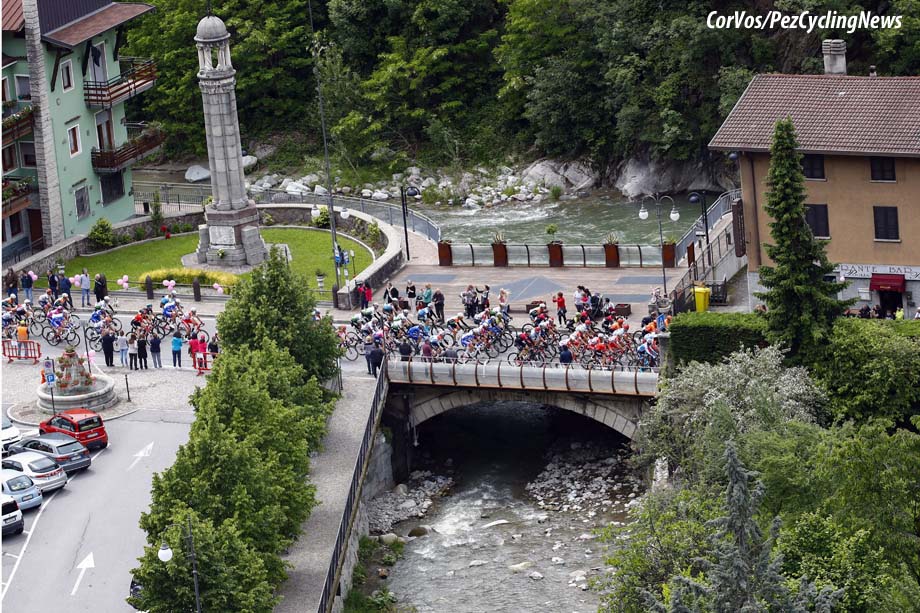 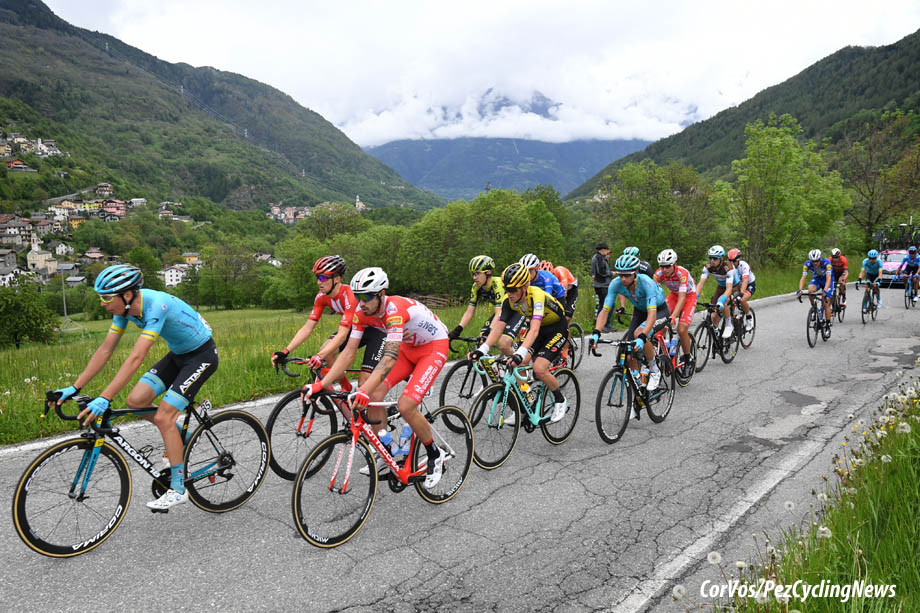 The leaders started the Mortirolo with a six minute lead. It was Nathan Brown who started the action on behalf of EF Education First. The American rode hard for his teammate Dombrowski, causing the leading group to split apart. One of the riders who had a hard time was… Dombrowski. 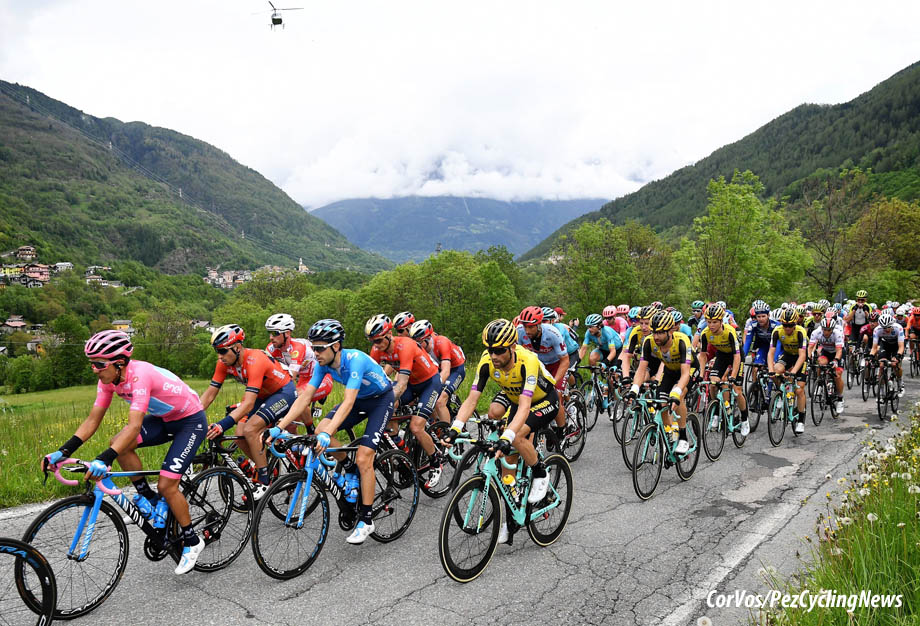 The peloton before the action

As the peloton started the Mortirolo, it was Nibali who put his teammate Valerio Agnoli to set the pace. The Italian did not last long, so Movistar took over again with Hector Carretero. This thinned the chase group. Up front: Nieve, Hirt, Caruso and Ciccone were clearly the strongest climbers. Hirt in particular hurt his fellow escapees with some big pushes, but Caruso and Ciccone refused to give in. Nieve was having a hard time, or was he waiting for Yates? Domenico Pozzovivo led the peloton, with teammate Nibali on his wheel. 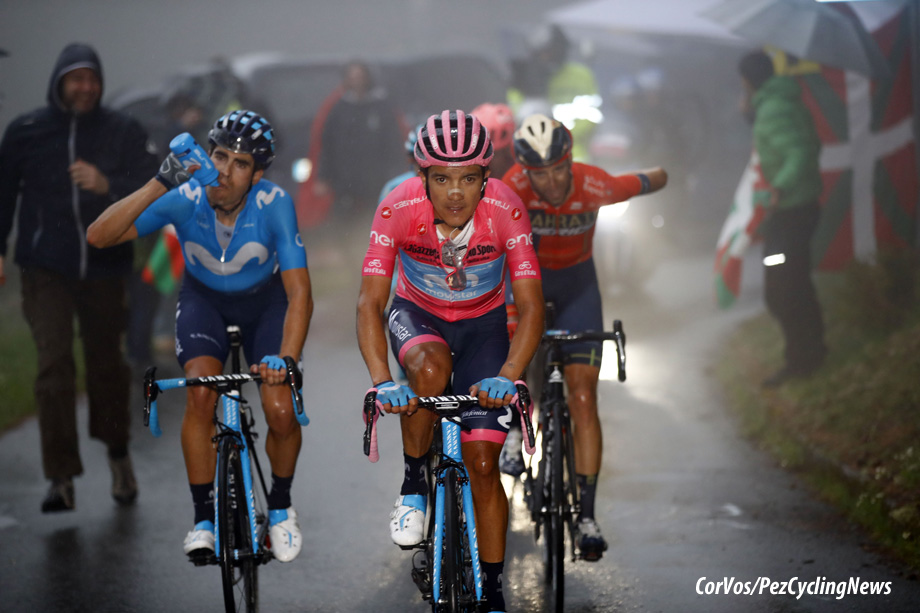 Carapaz had another good day

The pace of the small Italian was particularly high, which meant that more and more riders had to drop off the group, including Katusha-Alpecin’s Ilnur Zakarin and eventually Yates and Rafal Majka. This was the signal for Nibali to attack. The others did not respond, except Hugh Carty (EF Education First). In the pursuit, Carapaz had Antonio Pedrero and Landa, but the difference between Nibali and the other favourites was still small. López managed to rejoin and tried to jump to Nibali, but Pedrero, Lopez and Landa responded – Roglic couldn’t. The Slovenian had a fight to limit the damage, but the Jumbo-Visma leader had nothing in the tank. 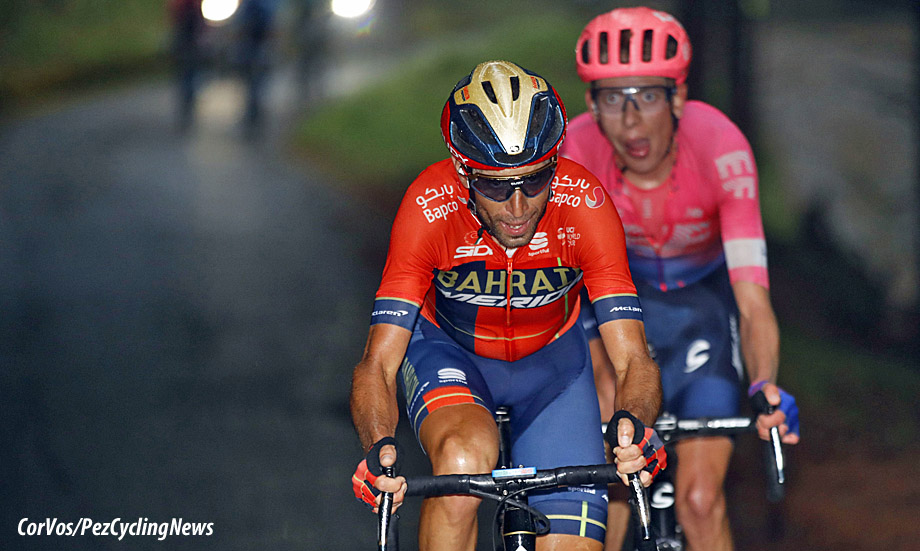 Nibali made his move and was followed by Hugh Carty 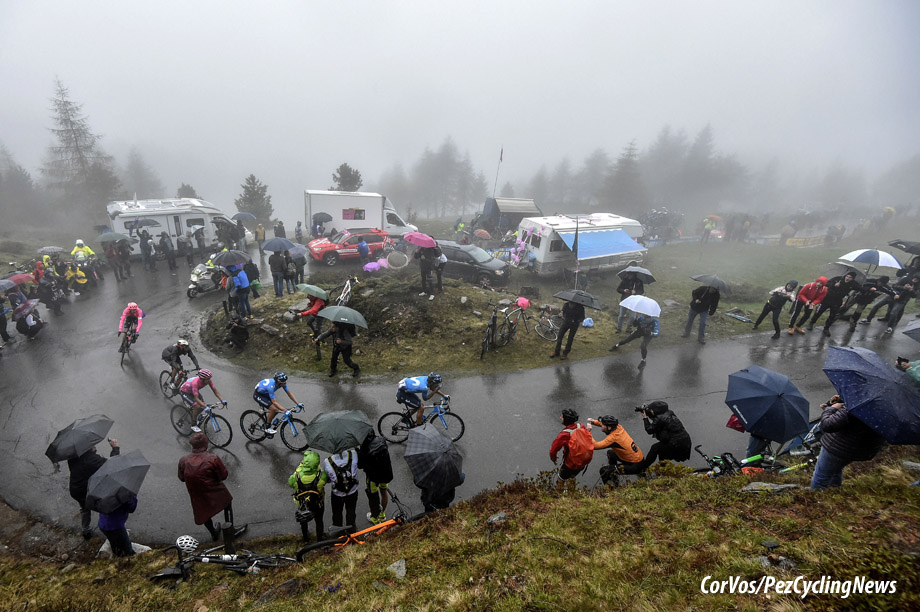 Nibali joined his younger brother Antonio. Two-time Giro winner Nibali did everything to put time into the others, but Movistar could keep the Italian in sight. The gap became even smaller when Landa pulled for his leader, Carapaz. Roglic was caught by the Yates group. If the Giro was not hard enough, the rain was pouring down. Nibali did everything to stay out of the grip of Carapaz, Landa and López, but they managed to pull the Shark in. 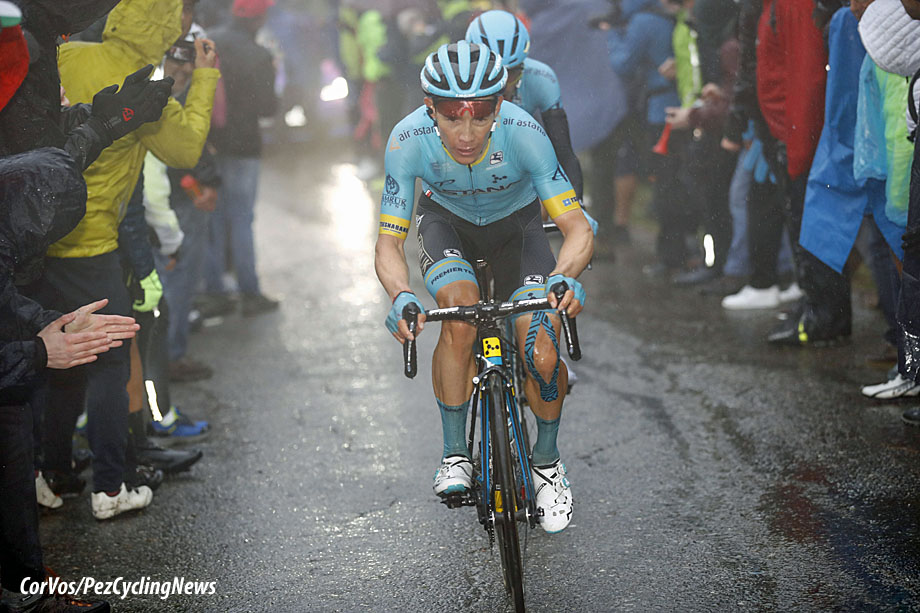 López had a hard day, but didn’t achive so much

Ciccone and Hirt rode well together on the Mortirolo with Caruso at a short distance, but looked to be waiting for Nibali. Nibali could not get Carapaz, Landa, López and Carthy off his wheel, but the danger for Movistar was not over yet, with the highly technical and now soaking wet descent of the Mortirolo to come. López was the first favourite at the top, 15 seconds ahead of Amador, Landa, Carapaz, Nibali and Carthy. Two minutes later, Roglic, Mollema and Yates emerged. The Slovenian has probably lost the 2019 Giro today. 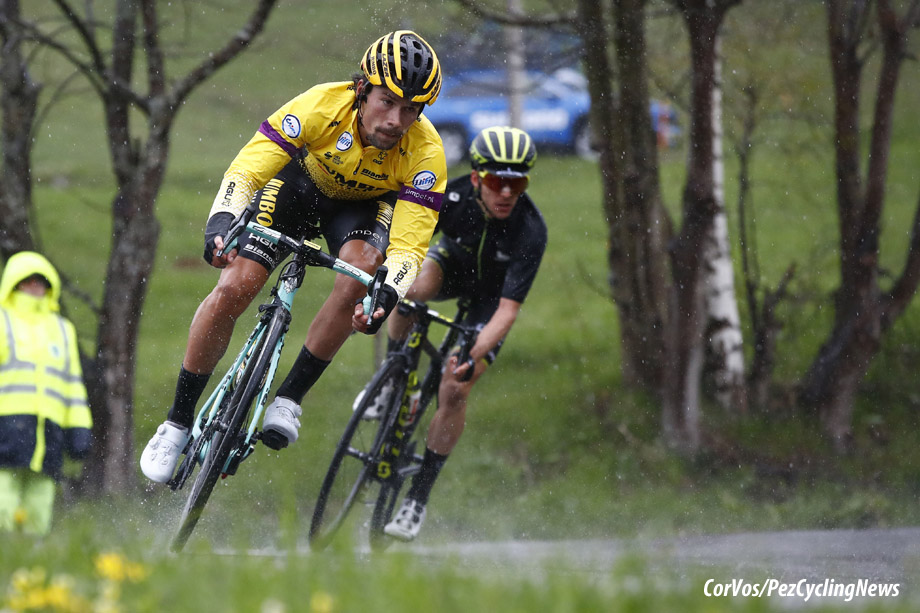 Everyone was waiting for an attack from Nibali, but the Italian decided to take the descent in safety. Ciccone and Hirt would fight for the stage win, but the Czech refused to ride with the Italian. Ciccone showed that he was not happy with his fellow front rider. Luckily the pace of the Nibali-Carapaz group had eased and Roglic regained a little hope. The Jumbo-Visma leader, together with Yates and Mollema, managed to reduce the difference to just 45 seconds. Although Nibali was joined by teammate Caruso which proved crucial for the chasing group, and the pace was increased. Movistar also started to ride ‘Full Gas’, knowing that they could cause a lot of damage to Roglic. 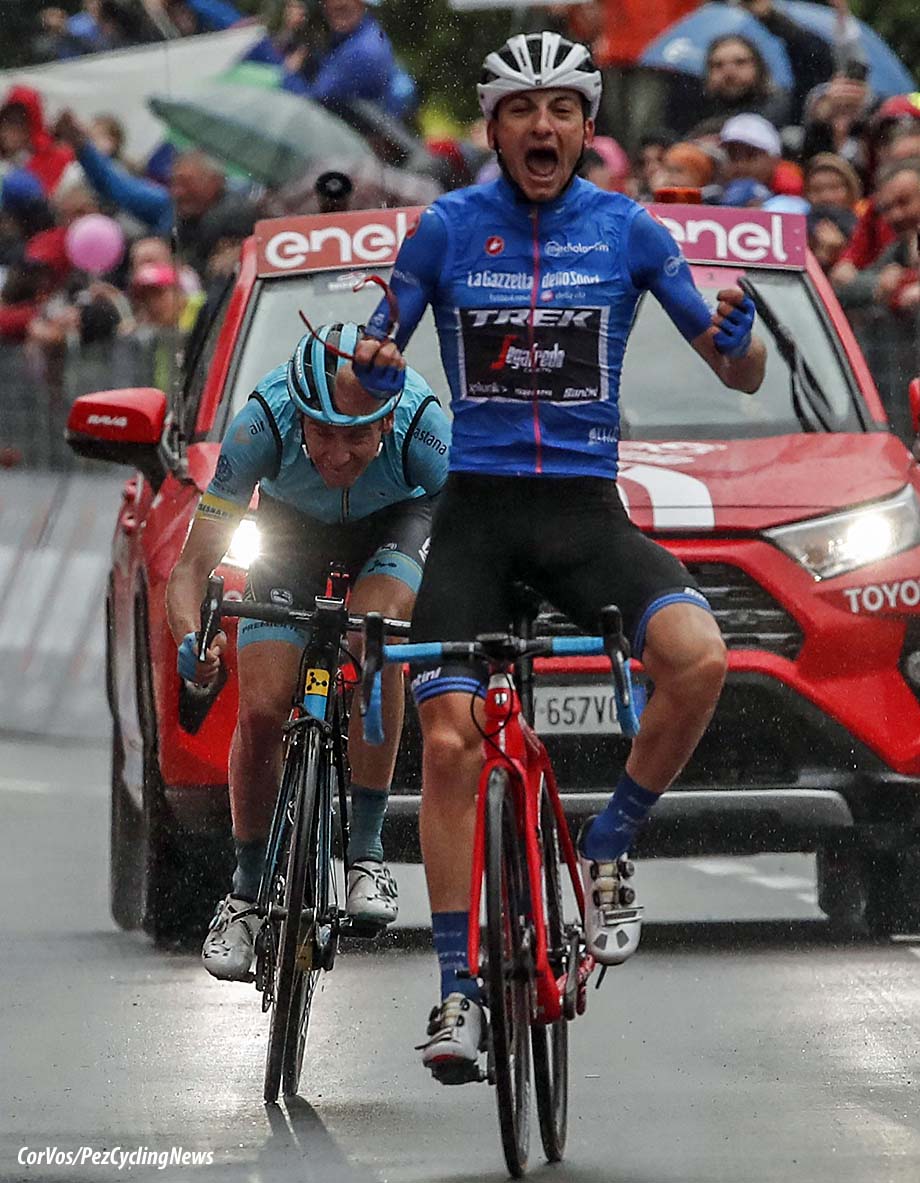 The win for a cold KOM – Giulio Ciccone

Ciccone and Hirt stayed together in the final kilometres, giving us a two-man sprint for the win. Ciccone had done most of the work on the run-in, but the Italian turned out to have the better legs and beat his escape buddy with ease. 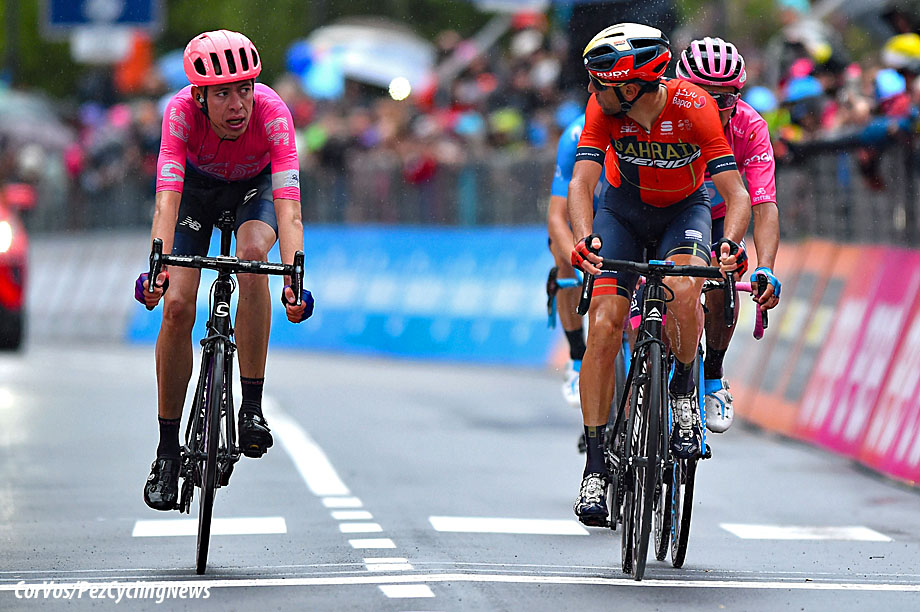 Nibali and Carty bring in the chase group

Nibali, Carapaz and Landa came in 1:41 down on the stage winner. Roglic finished together with Yates and Mollema at 1:23 from the pink jersey. Roglic was the big loser of the day as Carapaz’s closest competitor is now Nibali at 1:47. Roglic is third now at 2:09. 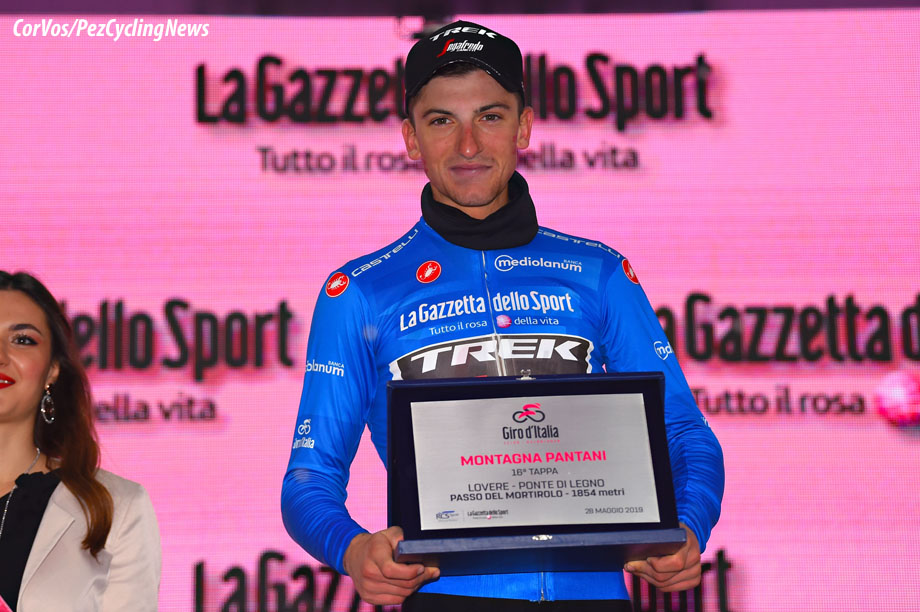 Stage winner, Giulio Ciccone (Trek-Segafredo): “I’ve been waiting for this second stage win for two years now. So I yelled with joy on the finishing line because it’s been a complicated day with lots of rain and cold. Jan Hirt didn’t want to cooperate so it’s been a bit nervous between us but at the end I’m happy with everything.” 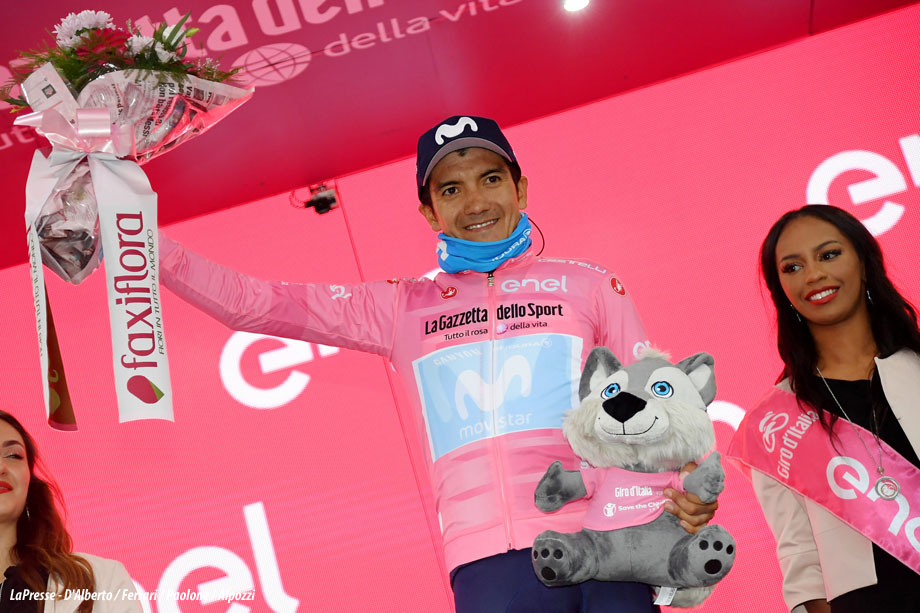 Race leader, Richard Carapaz (Movistar): “The truth is that it’s been a very complicated day, especially because of the weather conditions and the climbs. But as a team we’ve worked very well for Mikel Landa and myself. It’s another good day in terms of time gained on GC.”