Race Report: The German champion, Pascal Ackermann, won the second stage of the 2019 Giro d’Italia into the town of Fucecchio. The Bora-Hansgrohe fast-man was the best sprinter after 205 lumpy kilometres. Elia Viviani (Deceuninck – Quick-Step) was second, ahead of Australian Caleb Ewan (Lotto Soudal) in third. The Maglia Rosa stays on the shoulders of Primoz Roglic (Jumbo-Visma). 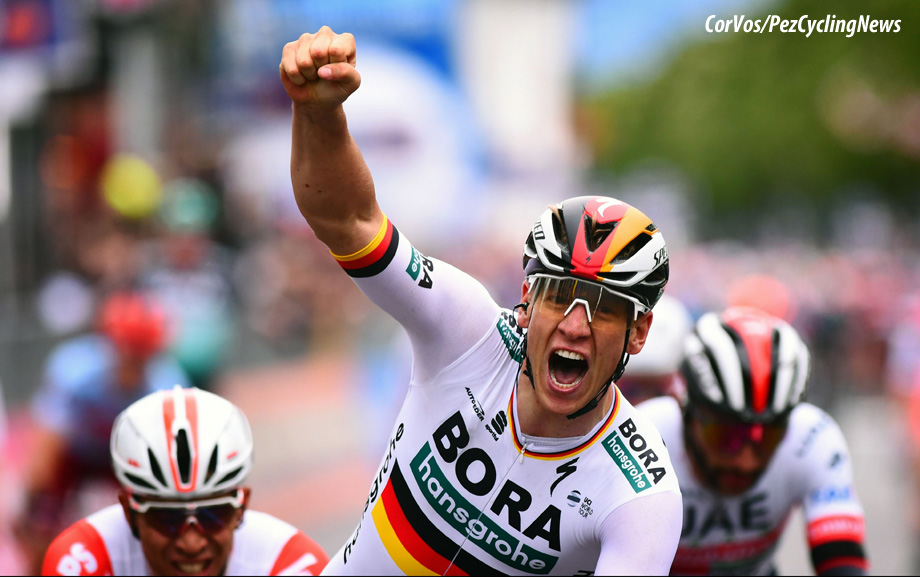 The big win for Pascal Ackermann

Stage 2: Not that flat

The sun for Saturday’s time trial in Bologna gave way to hard rain for Sunday’s stage 2 to Fucecchio. Within fifteen minutes of the start, there was a leading group of eight up the road in the cold and wet conditions. King of the Mountains, Giulio Ciccone (Trek-Segafredo), was there to consolidate his leading position in the blue jersey. Along with the Italian was François Bidard (AG2R-La Mondiale), Marco Frapporti (Androni Giocattoli-Sidermec), Mirco Maestri (Bardiani-CSF), Lukasz Owsian (CCC), Sean Bennett (EF Education First), Damiano Cima (Nippo-Vini Fantini-Faizanè) and William Clarke (Trek-Segafredo). 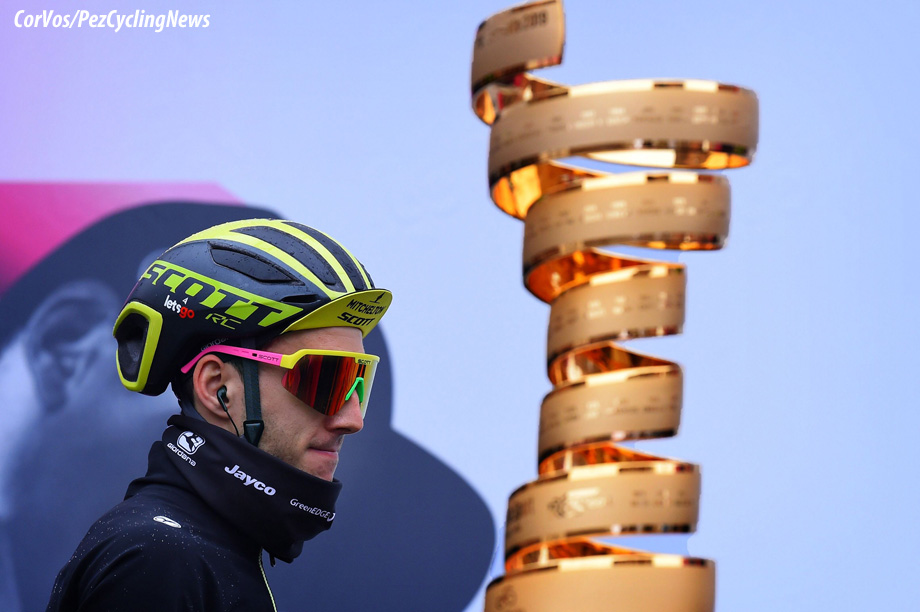 Will Simon Yates get his hands on the trophy? 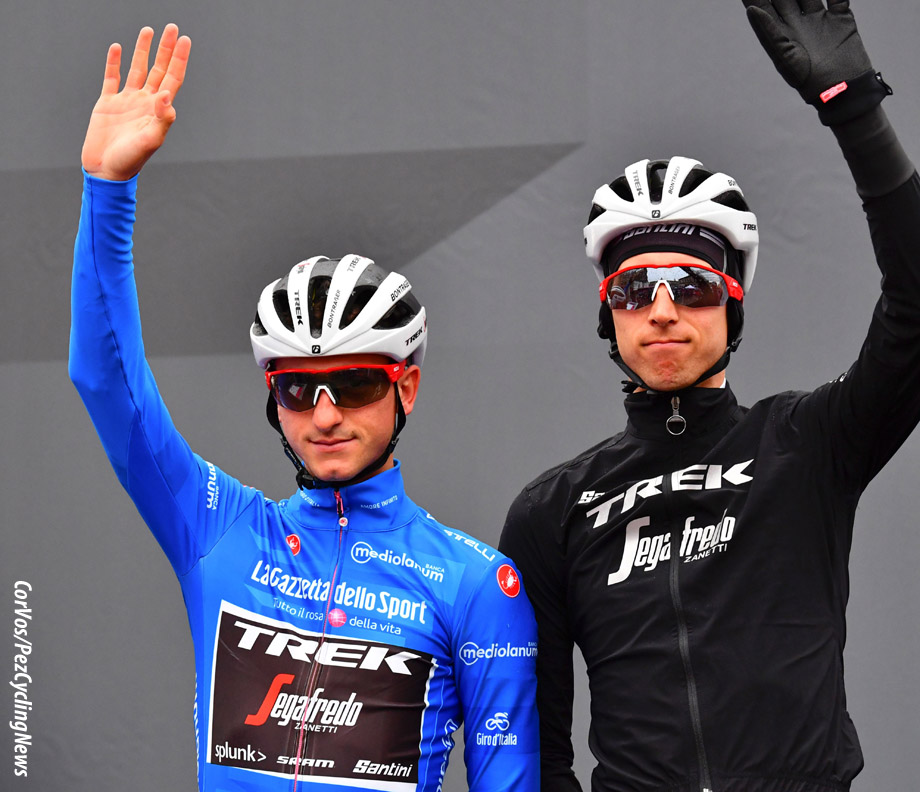 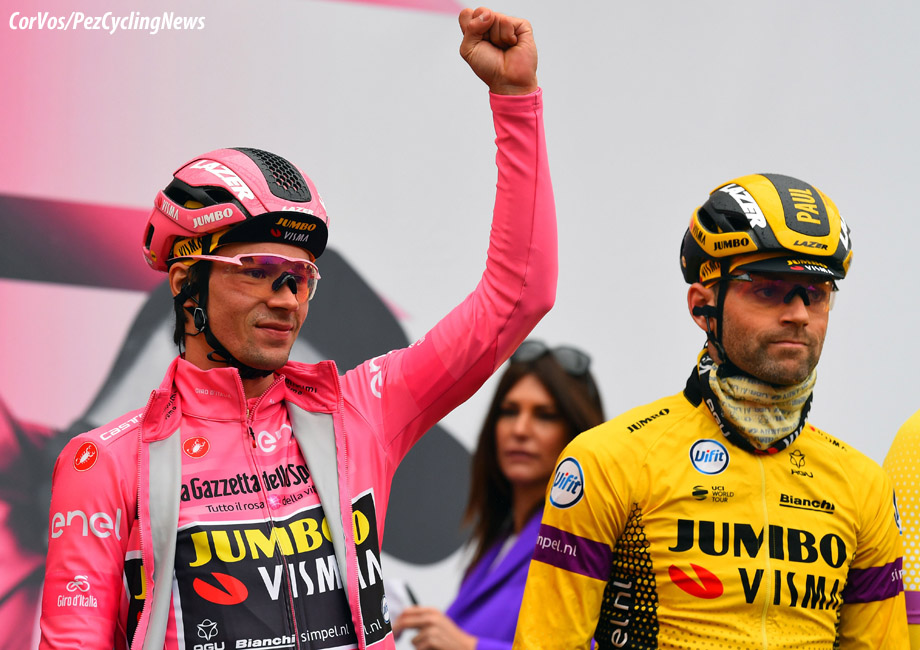 Roglic at the start 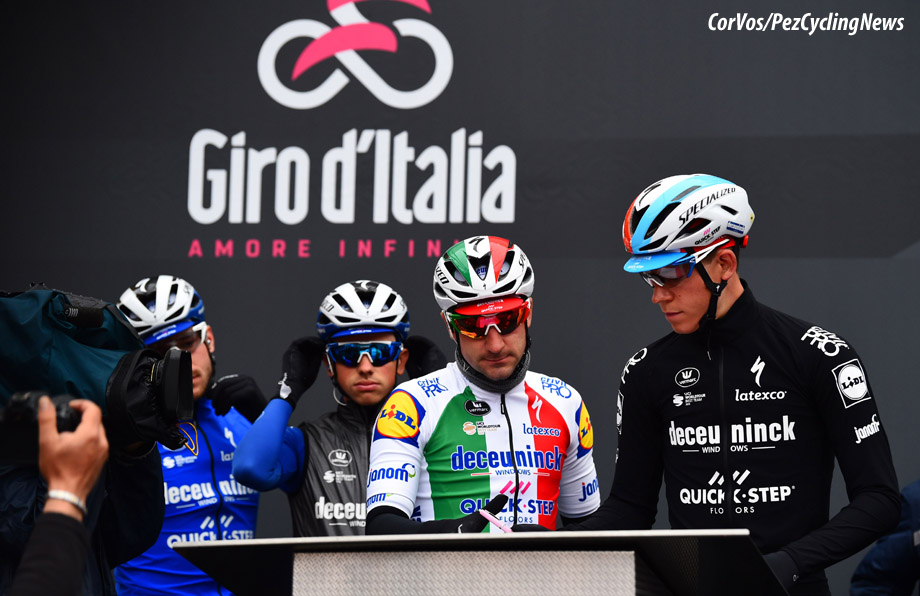 The Italian champ was looking for the win

The lead grew to more than four minutes, after which the sprinter teams each put a man on front of the peloton. The teammates of Elia Viviani, Caleb Ewan, Pascal Ackermann and Fernando Gaviria were in control with Jumbo-Visma also helping out. The lead of the eight was stuck around three minutes. 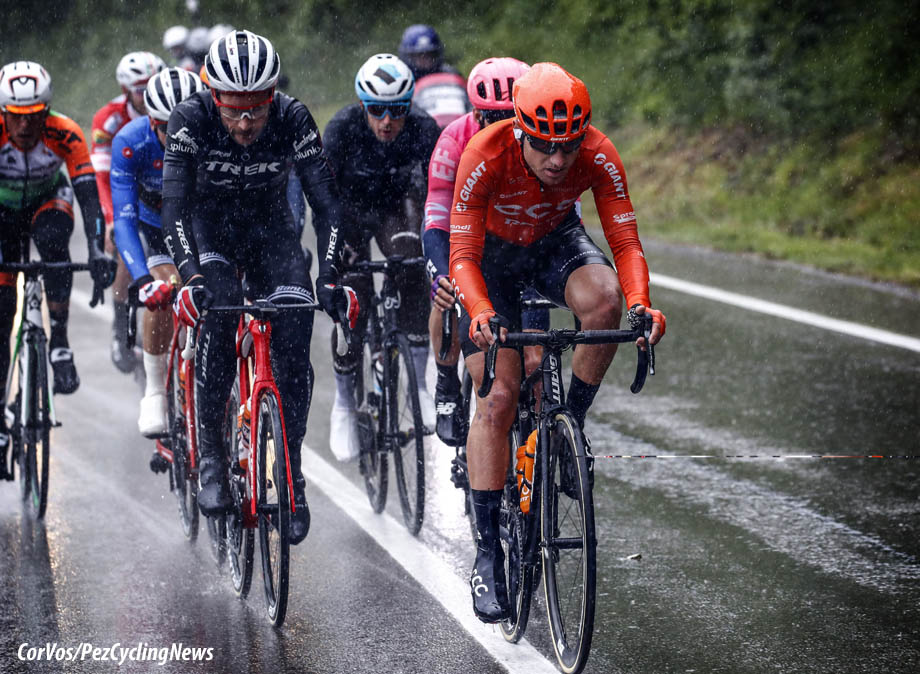 A wet start to the day for the break… 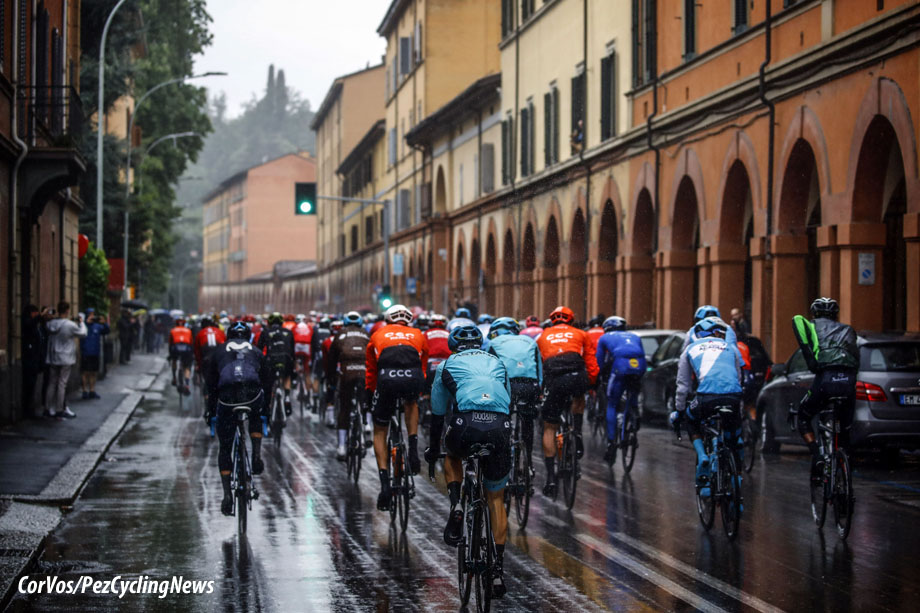 The first intermediate sprint after 130 kilometres went to Frapporti and the second was won by Cima, after which the work for Ciccone started. The wearer of the blue KOM jersey jumped on the first climb of the day, the Moltalbano (cat 3). At the base of the climb, the peloton was at 2 minutes. Owsian and Bidard were the only ones able to follow Ciccone, Frapporti also managed to join the front group. Ciccone took the seven mountain points. 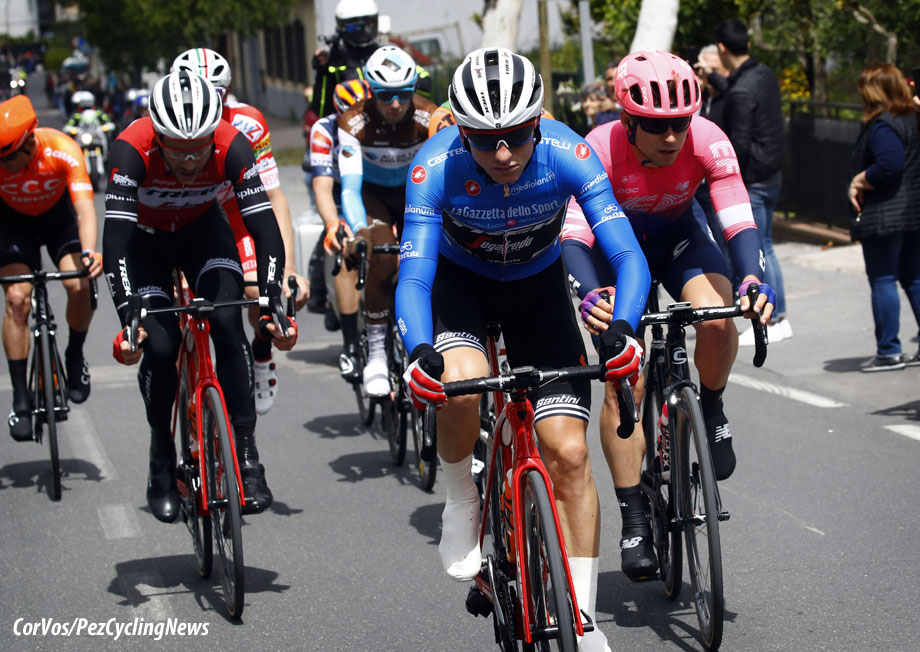 The sun dried out the wet roads for the finish 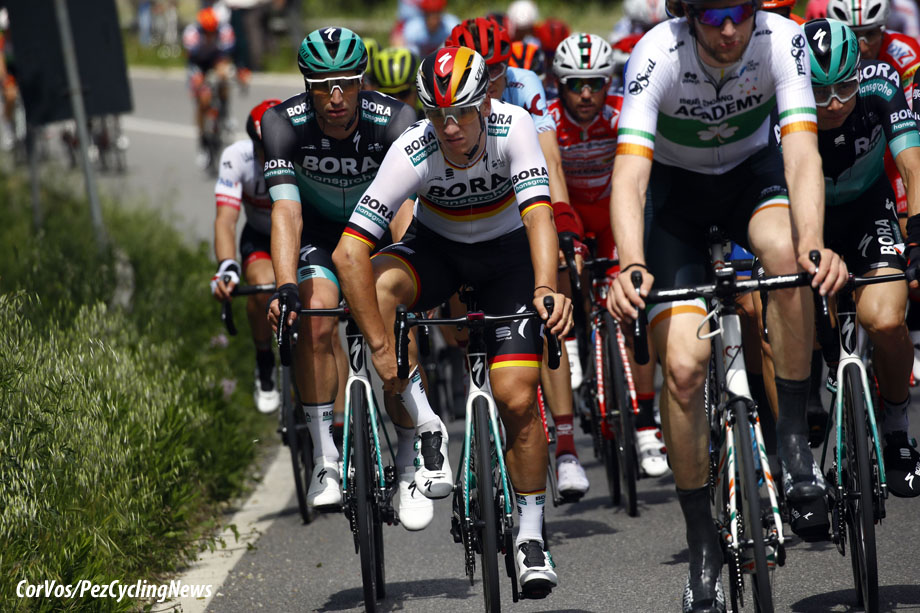 Ackermann ready for the sprint

In the peloton the favourites were all close to the front. Bahrain-Merida took the initiative, while Dumoulin, Yates and Roglic moved forward. After the descent, Jan Bakelants (Sunweb) jumped out of the peloton, but he was quickly caught. 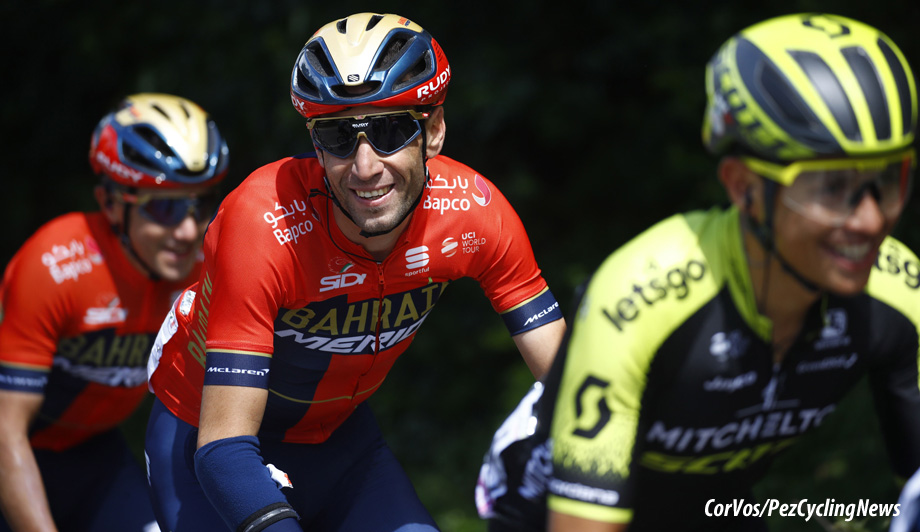 The sun brought out the smiles 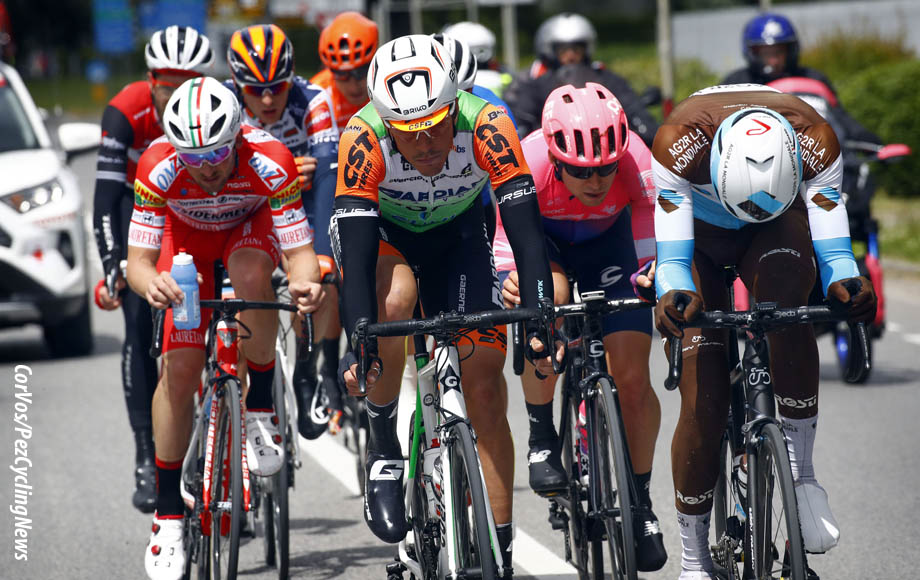 The sun didn’t help the break

The sprinters were all still in the peloton when they hit the relatively flat climb of the San Baronto. After the summit (where Ciccone took the points again), there was 26 kilometres to go to the finish line and the sprinter teams took the lead in the peloton again. On the descent the peloton broke into two parts, but the majority were together for the run-in to the finish in Fucecchio. 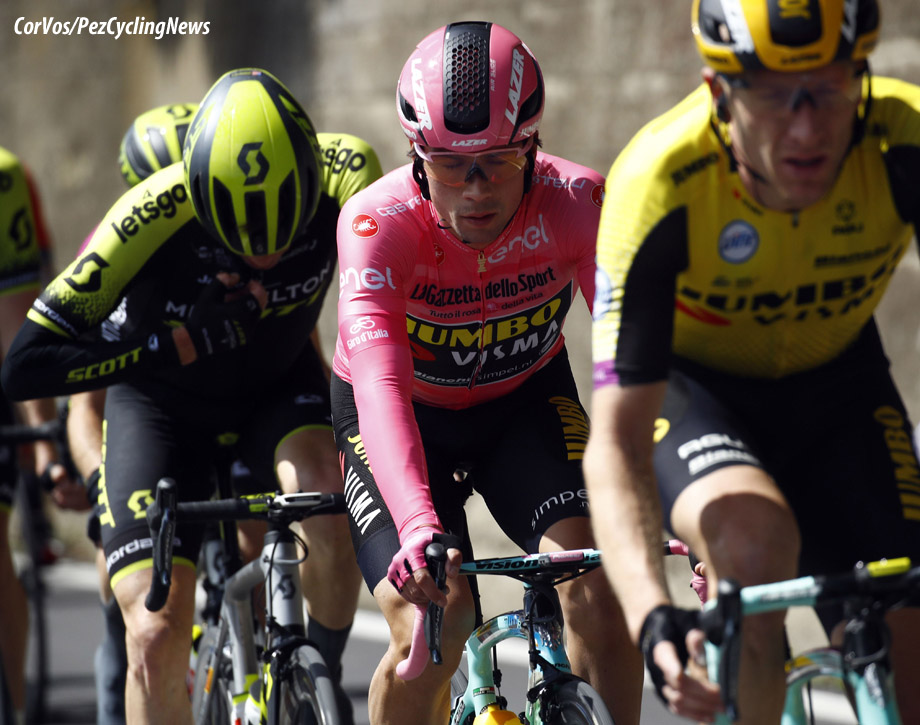 The pink jersey moved to the front for the final climbs

The four remaining leaders struggled on as the peloton lingered at 10 seconds. The escape was ended 7 kilometres from the finish. BORA-hansgrohe showed itself the entire day at the front, but Groupama-FDJ and Deceuninck – Quick-Step also moved to the fore in the narrow, twisting finalé. The last kilometres caused quite a bit of chaos. 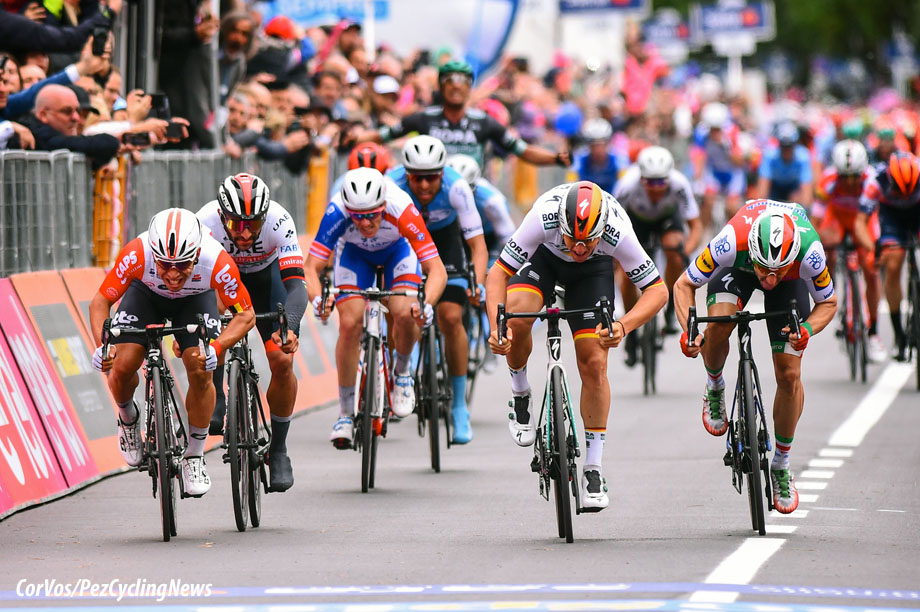 It was a fast, but clean sprint

They sprint started without Giacomo Nizzolo and Manuel Belletti, who both had late punctures. The final kilometre was led by Lotto Soudal, who did a great led-out for Caleb Ewan, but the Australian was overtaken by Pascal Ackermann and Elia Viviani in the last hundred meters. The German champion held off the Italian champion for the win and Ewan came third, ahead of Fernando Gaviria (UAE Team Emirates). This was Ackermann’s first stage victory in a Grand Tour. 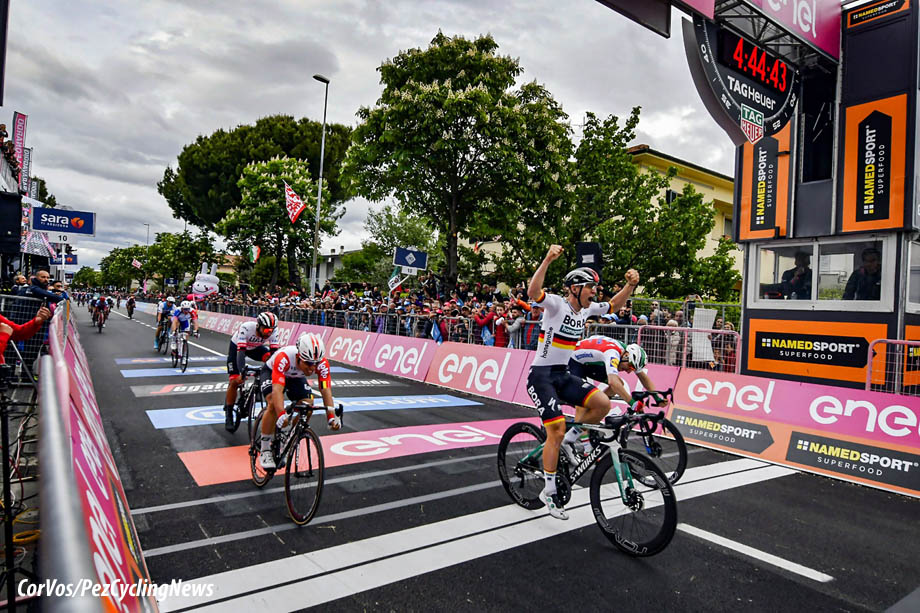 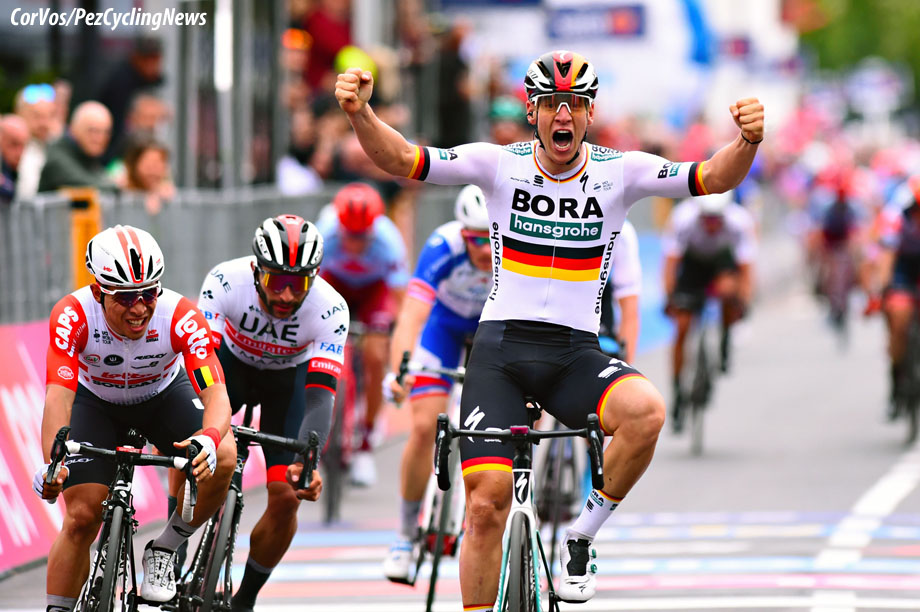 The German champion beat some of the best sprinters

Stage winner, Pascal Ackermann (Bora-Hansgrohe): “I feel so happy. It was my first chance to win a stage and we achieved it straight away. It’s good for the next three weeks. I chose the right moment to sprint from 250 meters to go. To win the first stage of my first Grand Tour is fantastic.” 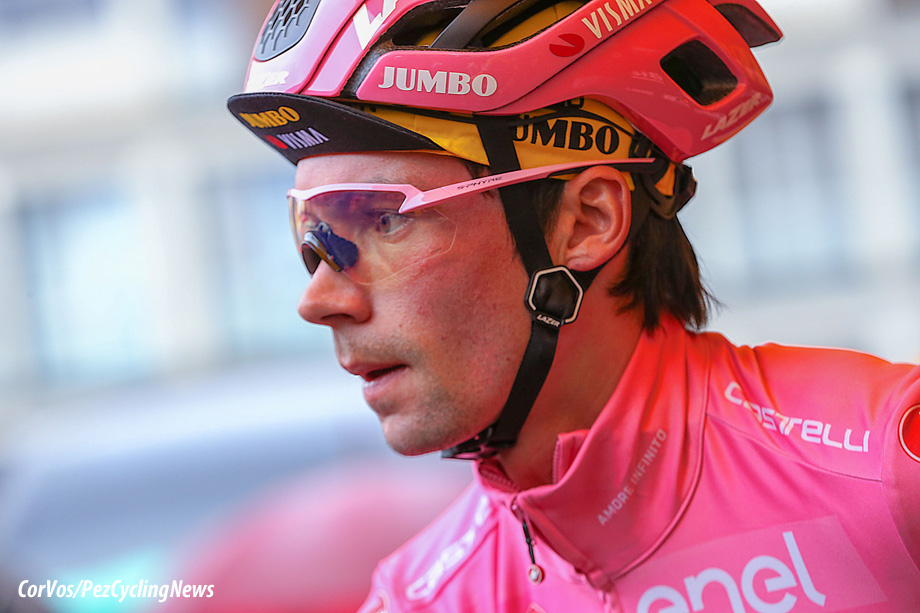 Race leader, Primoz Roglic (Jumbo-Visma): “It wasn’t an easy day because it was cold from the beginning and also quite fast all the time. It’ll be another day in the Maglia Rosa tomorrow. The team worked hard for that. It’s a pleasure to retain the jersey.”

# More in EUROTRASH Monday and stay PEZ for the Giro. #