Race Report: Stage six of the 2019 Giro d’Italia saw a big change in the overall classification. Valerio Conti (UAE Team Emirates) will start tomorrow in the Maglia Rosa. The Italian was part of the early break which managed to stay clear all the way to the finish line. The stage victory went to his countryman and finalé partner; Fausto Masnada (Androni Giocattoli-Sidermec). 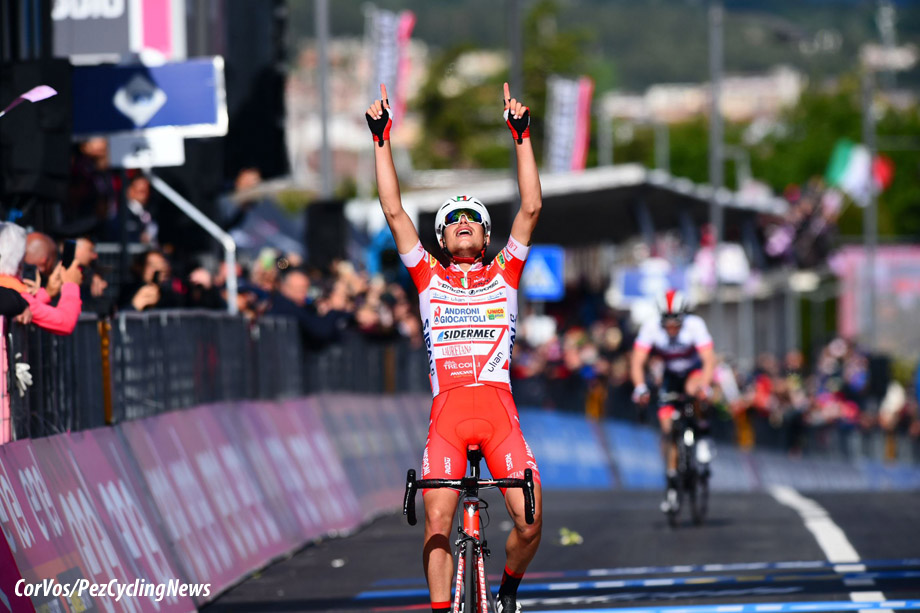 All things can change: Yesterday it was raining and the GC stayed the same, but today the sun was out and the overall was turned upside-down. At the end of the 238 kilometre stage to San Giovanni Rotondo, we had a new overall leader and an Italian stage winner. Valerio Conti and Fausto Masnada finished together to share the Giro d’Italia spoils. 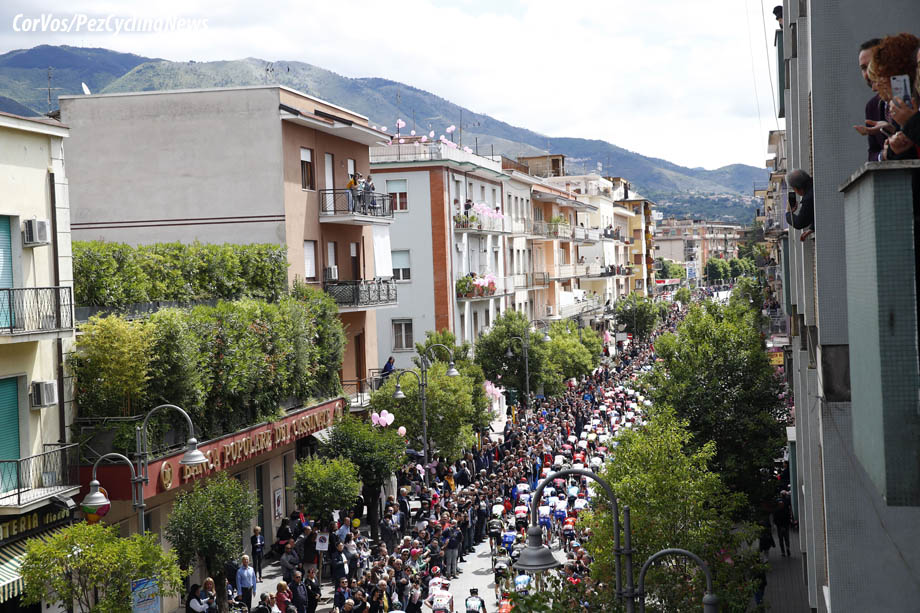 A sunny stage start out of Cassino

Route
Stage 6 – Cassino-San Giovanni Rotondo 238km – total elevation 2,800m
The first 190km of this very long stage are on straight and broad fast roads, with a few tunnels along the way, but no major climbs. Then the route changes dramatically: to narrower, worn out roads. The Coppa Casarinelle climb, 30km before the finish, ascends in hairpins with 5-6% gradients to the Gargano, until 15km from the finish line. 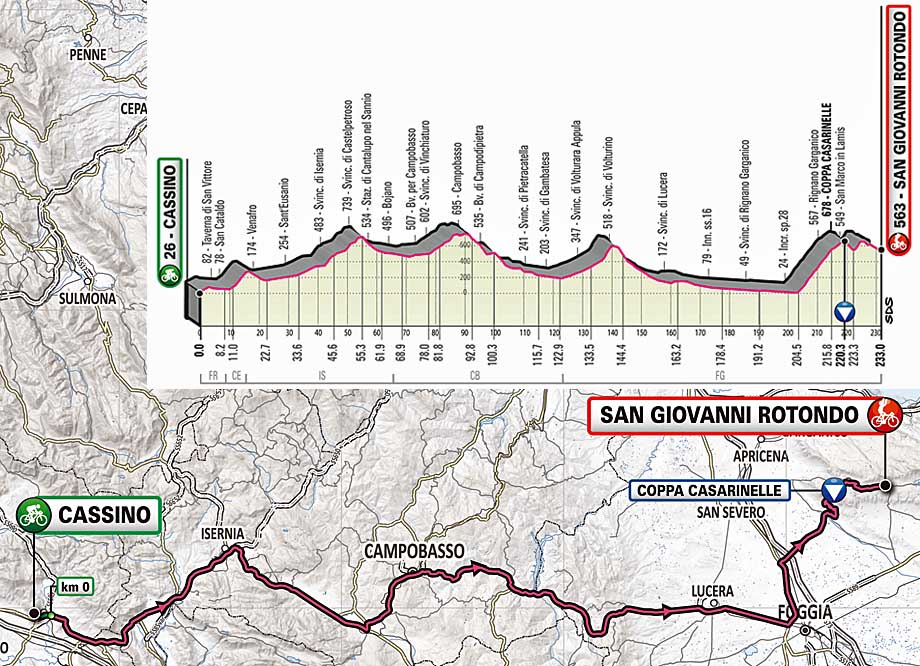 Final kilometres
On undulating, twisting roads, the route runs uphill until 6km out from the finish, then downhill for 3km. It’s uphill again, across the town before heading into the final descent, from 2km to the red flag. The 1,200m home straight is on 7.5m wide tarmac, with a 2-3% incline. 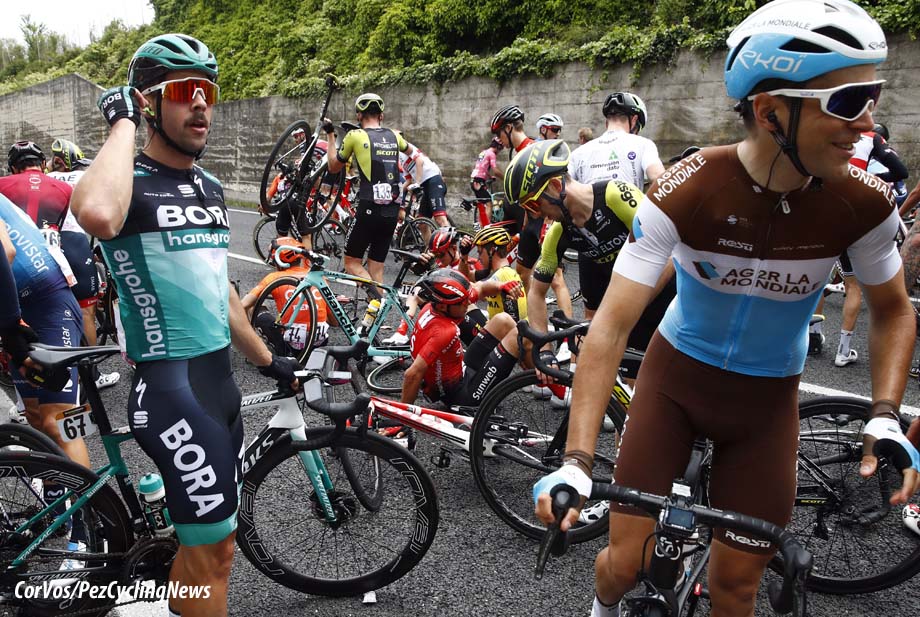 Many came down in the crash 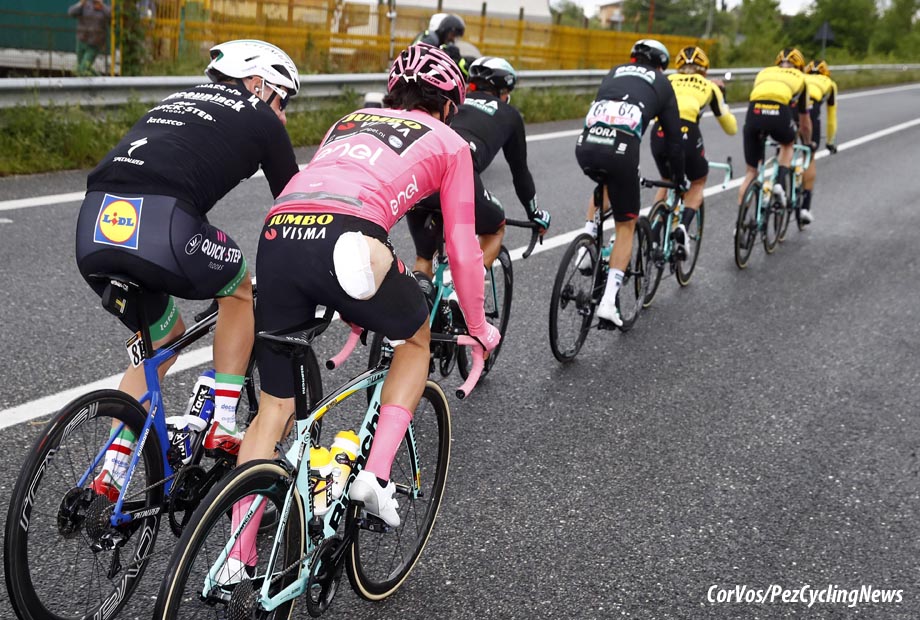 Roglic was possibly the worst affected

On Wednesday there was little enthusiasm for an early break, but today was perfect for a successful escape. It took a while before a break was allowed to go up the road, which made for a nervous peloton. Several crashes occurred, including the overall leader, Primož Roglič (Jumbo-Visma). He was able to race on, but with a very visible injury to his right hip. 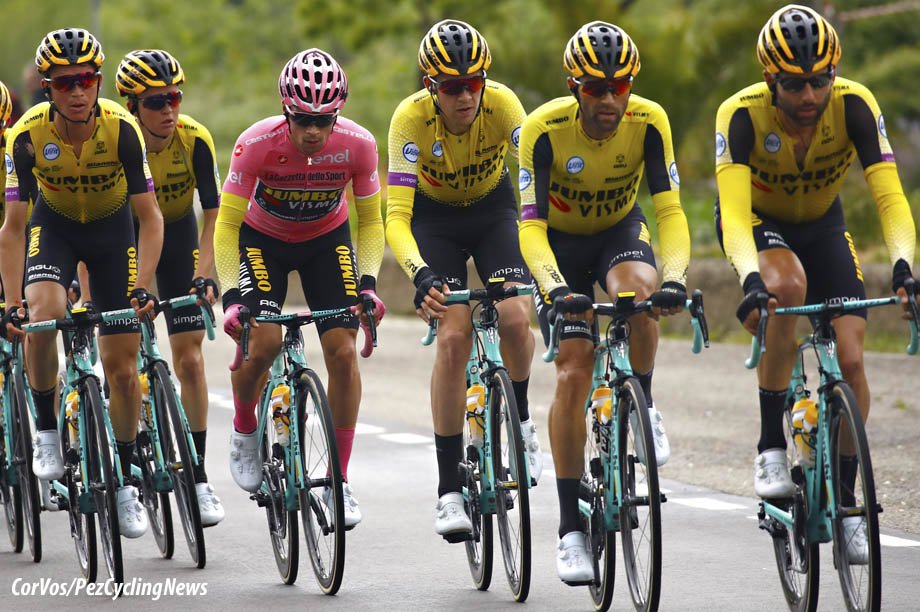 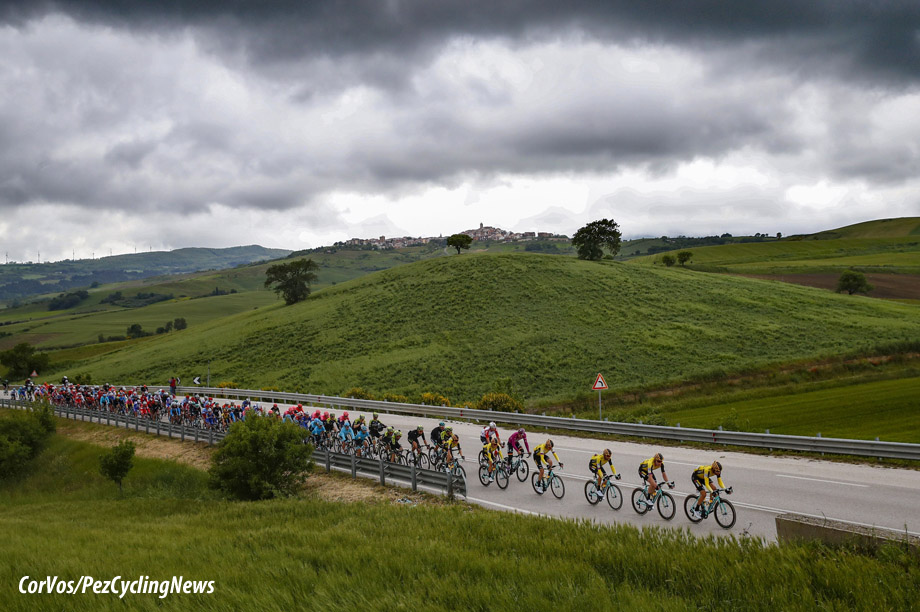 Conti started the day at 1:59 down on Roglič, so he soon rode into the virtual pink jersey. The lead for the eleven dropped to 4 minutes, but after Roglic had been patched up, his Jumbo-Visma started to ride. 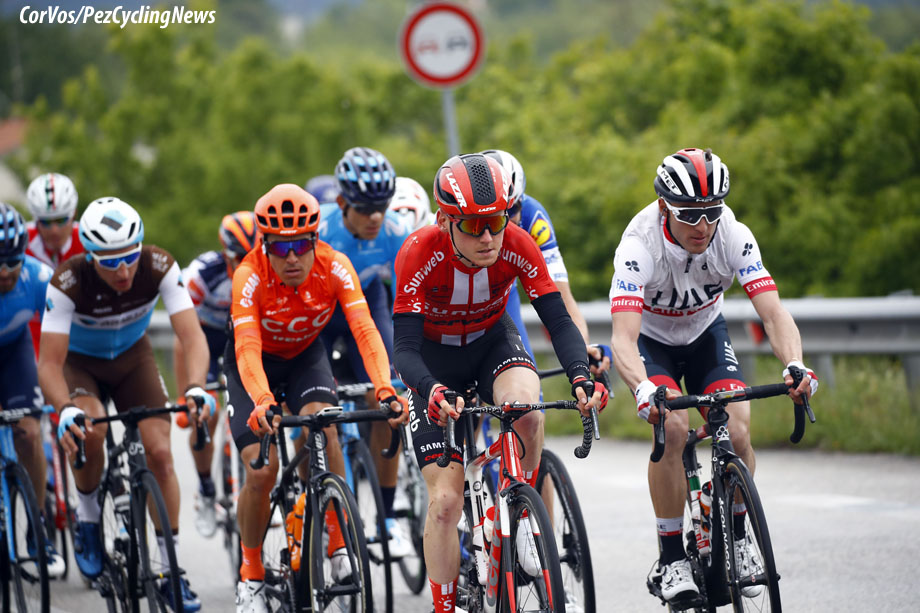 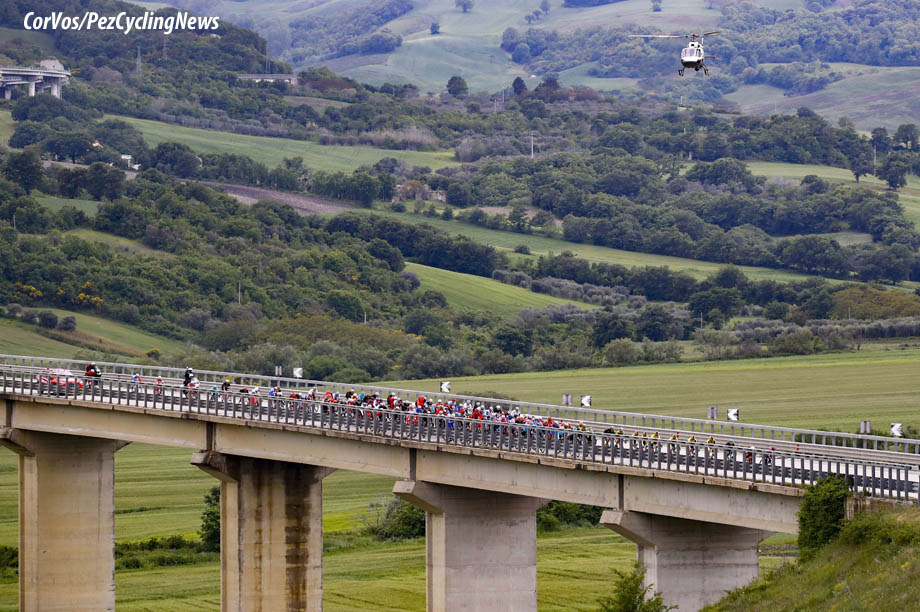 The break managed to gain more time, giving them the dream of victory and a new overall leader. On the climb of the Coppa Casarinelli, with a five minute lead, the first attack came from Masnada and the Italian was joined by his compatriot Conti. 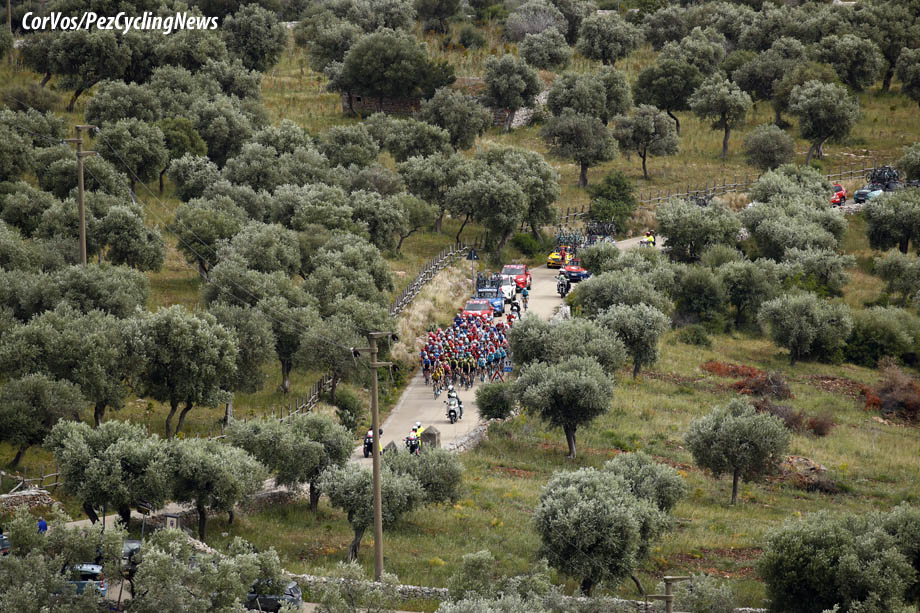 The peloton took it steady on the climb

The others in the group could do nothing and allowed the two Italians to gain half a minute. This was perfect for Conti, as he was heading for a pink jersey. Jumbo-Visma knew the overall had gone, but carried on setting the pace for the peloton. The main action was at the front. 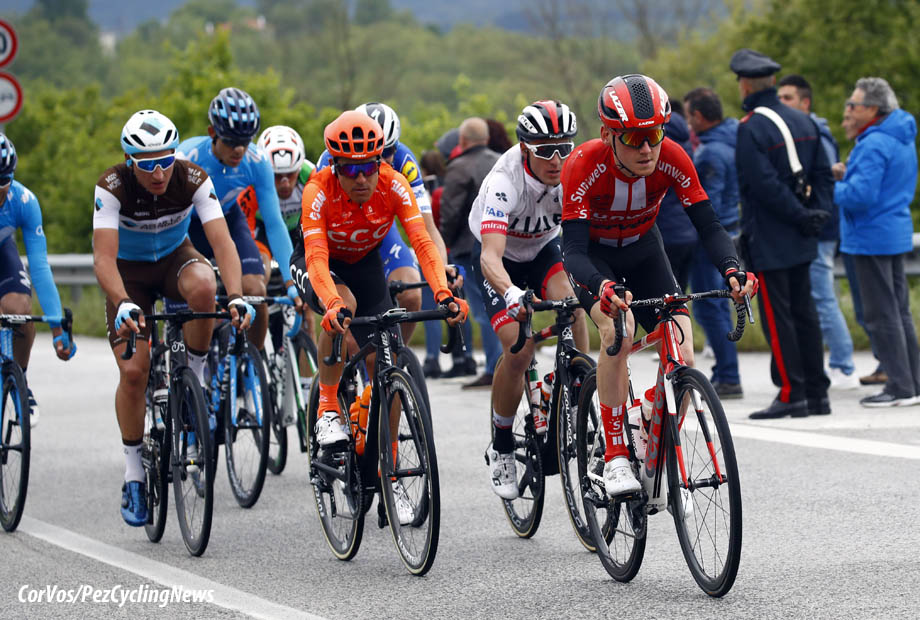 Oomen tried to cross to the leaders, but it didn’t work 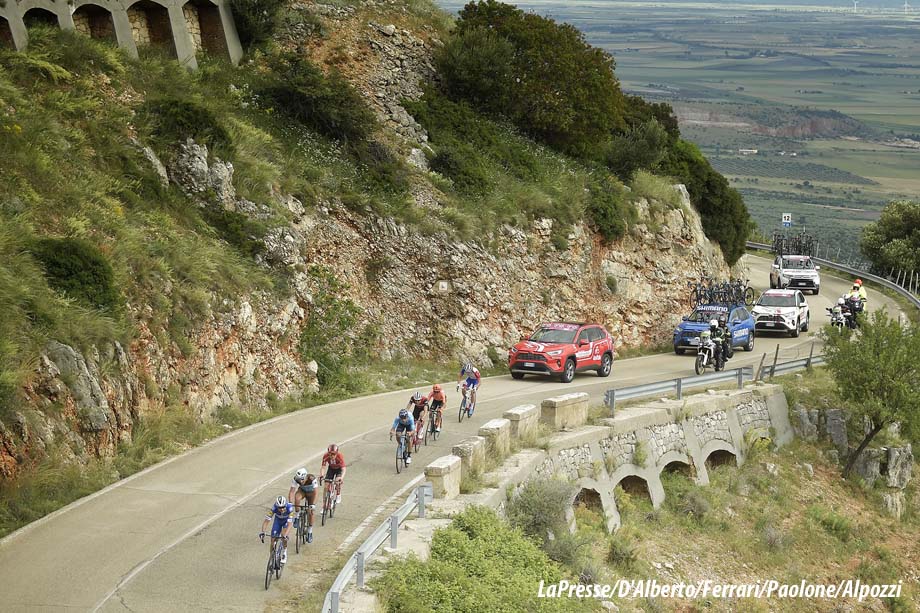 The chase couldn’t catch the two up the road

Sunweb’s Oomen tried to cross, but the others in the chase group were not keen on his, or anyone else, joining the front duo. Oomen, Plaza, Rojas and Carboni also tried, but this wan’t to succeed either. It was Masnada who was the first at the summit of the Coppa Casarinelli, ahead of Conti, with Carboni at the front of the chase. 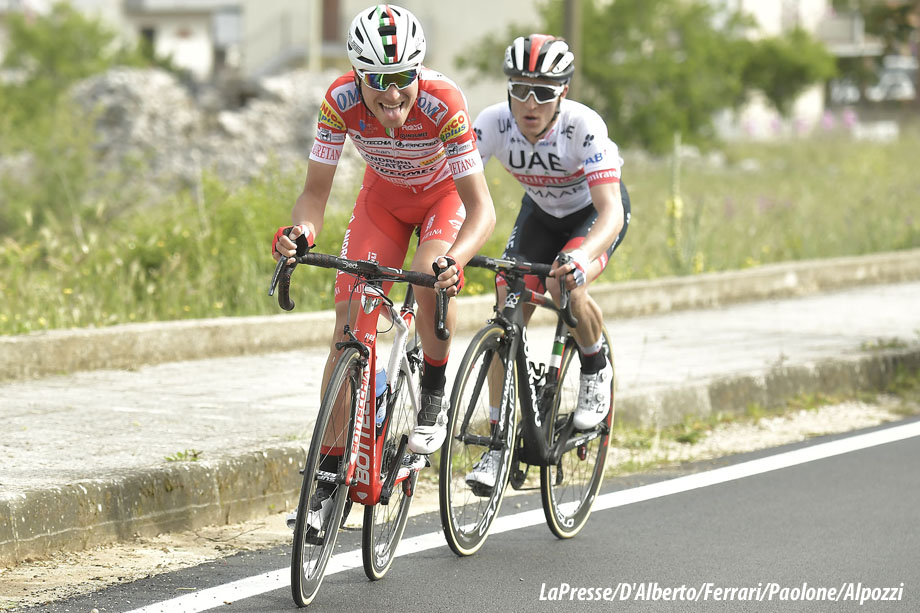 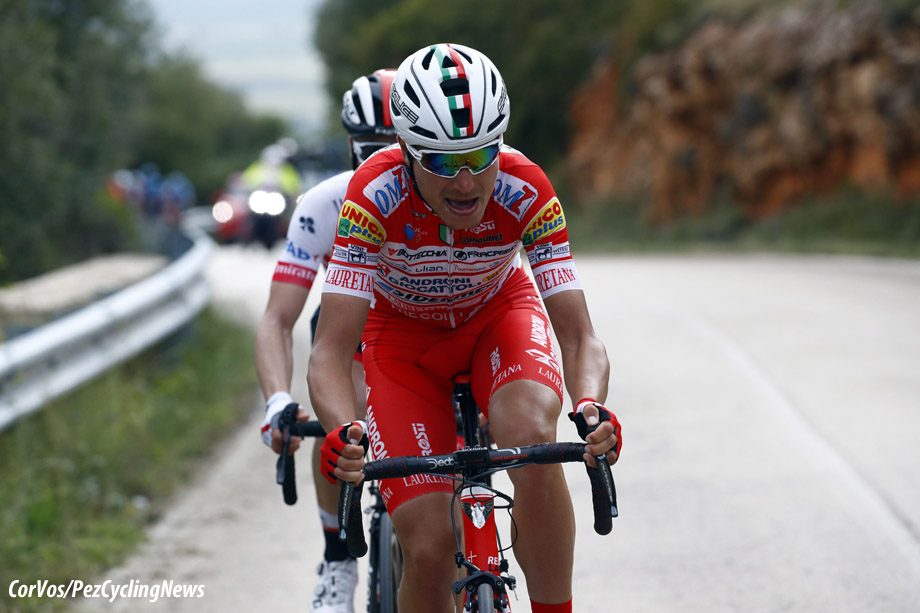 Masnada was the strong-man of the duo

For the final 15 kilometres, Masnada and Conti managed to stay out of the grip of the chasers, giving us a 2-up sprint for the win. Conti was more concerned with the pink, and so drove hard for the line. Masnada came past for the stage win with ease. 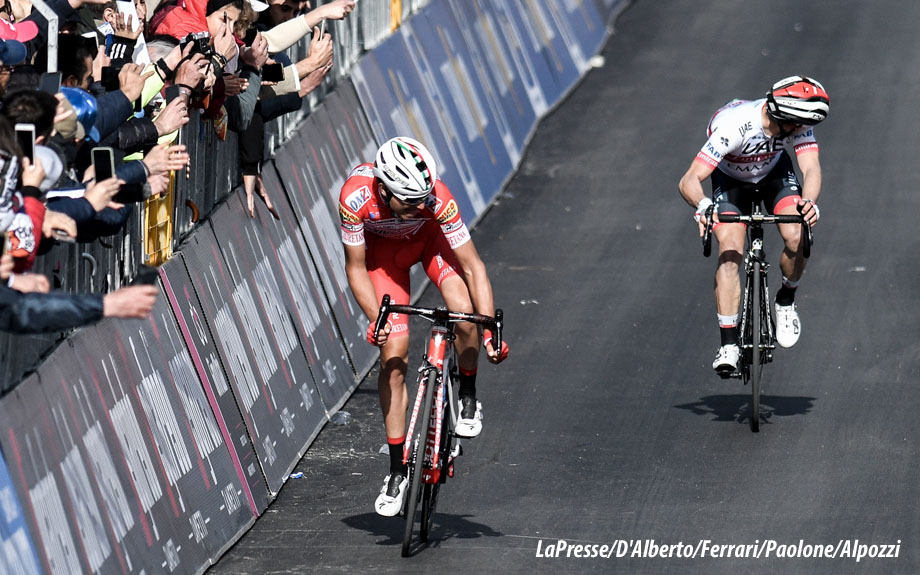 Masnada had the sprint in the bag 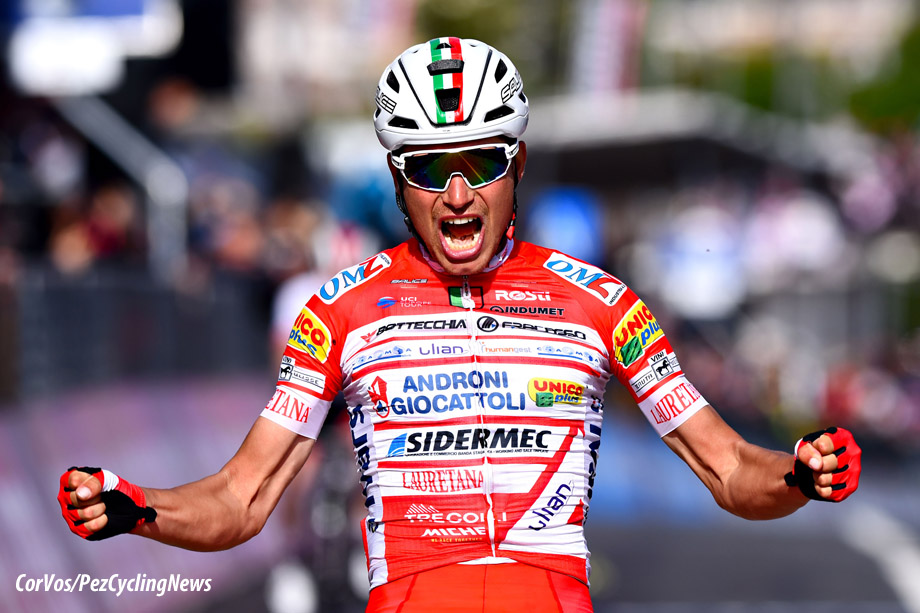 Stage winner, Fausto Masnada (Androni Giocattoli-Sidermec): “I’m very happy with this win. I knew today could be the day for the breakaway to succeed. I came to the Giro with a good shape. It was our team’s goal to win a stage and I’m delighted to have achieved it.” 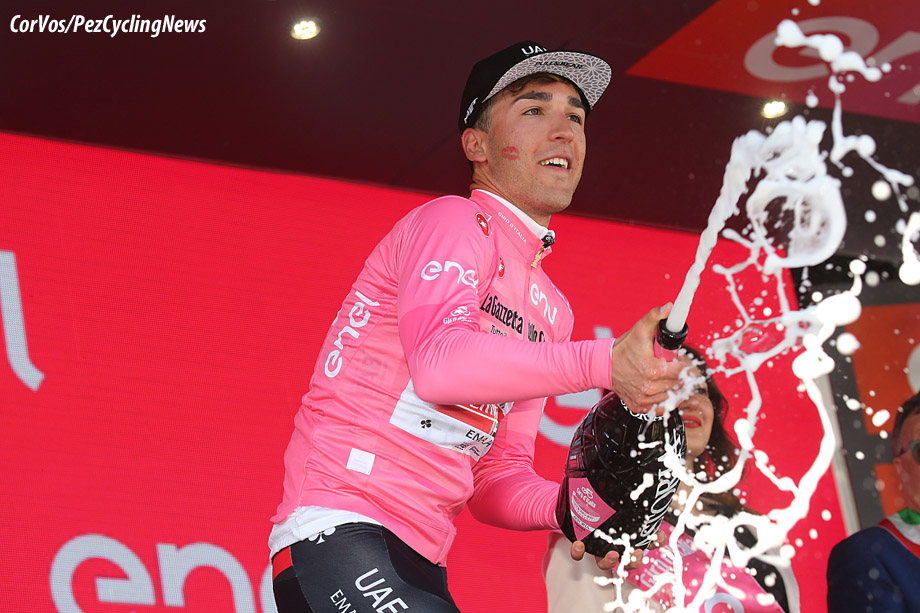 Conti in the Pink

New race leader, Valerio Conti (UAE Team Emirates): “I was targeting both stage win and Maglia Rosa but Fausto Masnada is an incredibly strong rider. I’m very happy with what I got. For an Italian rider, it’s fantastic. This is my first time leading a stage race. I’m thrilled.”