Race Report: Another new Giro d’Italia stage winner on the seventh day, this time from Spain. Astana’s Pello Bilbao took the win in L’Aquila with a solo attack from a leading group with just over one final hard kilometre to go. The Basque rider finished ahead of Tony Gallopin (AG2R-La Mondiale) and Davide Formolo (Bora-Hansgrohe). Valerio Conti (UAE Team Emirates) held the pink jersey. 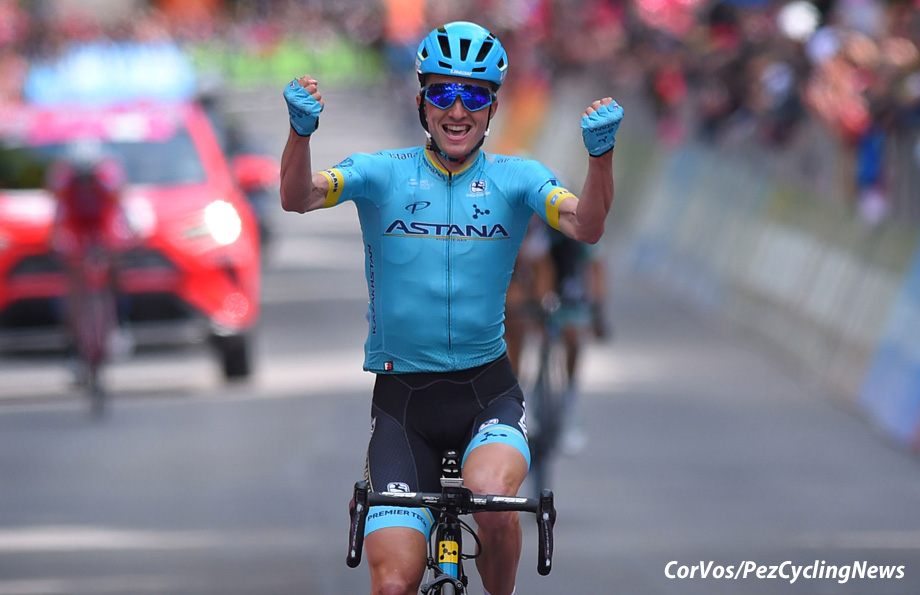 On yesterday’s stage 6 the break was given a free pass, but today also offered opportunities for the attackers. It took a very long time before a leading group made their escape. After 30 kilometres the peloton was still together, and so points leader, Pascal Ackermann (Bora-Hansgrohe), took full advantage of the situation at the first intermediate sprint. 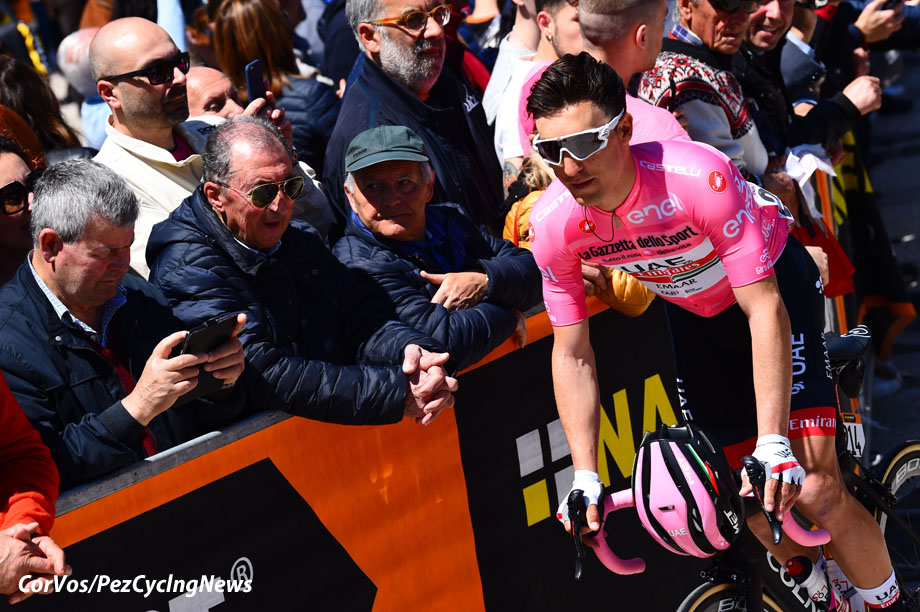 Valerio Conti was pleased to be in the pink jersey

Route
Stage 7 – Vasto-L’Aquila 185km – total elevation 2,400m
With a hilly profile, this stage starts its route beside the sea, all the way to Ortona, and then follows the constant undulations of the hinterland, taking in climbs up Ripa Teatina and Chieti. The only categorised climb is Svolte di Popoli, before the plateau leading to L’Aquila. After the GPM, straight roads with a mild incline will lead all the way to L’Aquila, crossing the areas affected by the April 2009 earthquake.

Final kilometres
With 9km to go, the riders leave the ss17 and tackle the Via della Polveriera climb, with gradients around 5-6%, topping out at 9%. The route heads down towards the castle, twisting and winding its way through the city until the final descent (partly within the centre), which ends with a sharp right-hand turn 2km from the finish. With 1,500m to go, the road heads up again. The final kilometre has a gradient of around 7%, peaking at 11% a few hundred metres before the home straight (450m, 7% uphill gradient). The finish line sits on a 7m wide asphalt road. 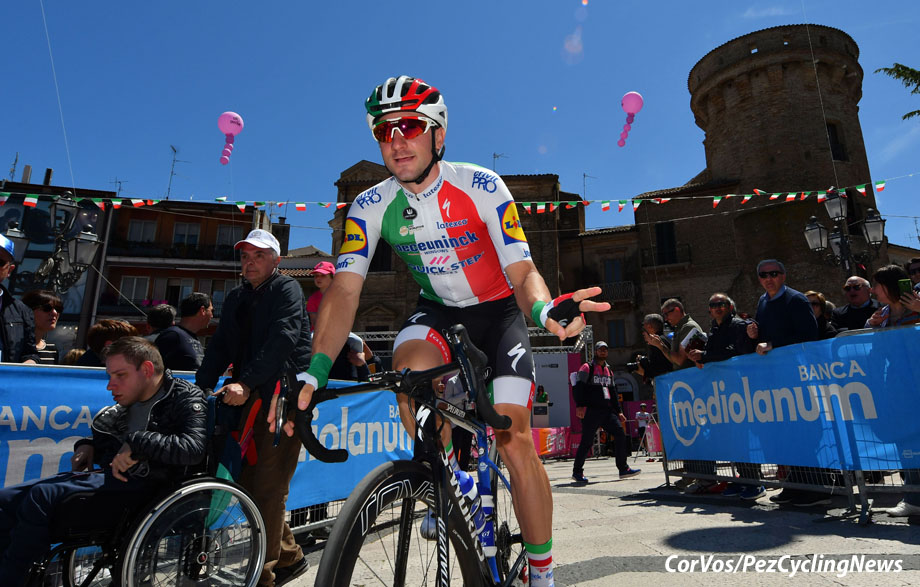 Elia Viviani will be looking for another stage win, maybe not today 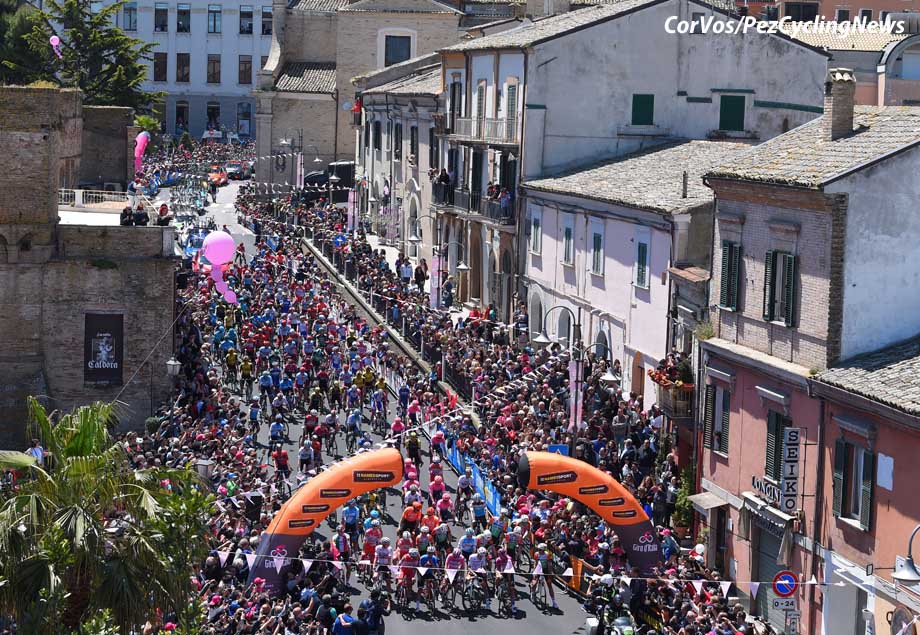 A good crowd to see stage 7 off from Vasto

The race leader’s UAE Team Emirates teammate, Fernando Gaviria had to retire from the race due to knee pain over the last few days. The Colombian sprinter said: “I was struggling from the start today and my left knee has been already been hurting for some days. I tried to hang on but I could barely push the pedals. It’s a pity because we were doing okay in the sprints and were ready to have another crack. The knee pain has complicated things. I’ll rest now, take care of the knee pain and come back and build towards the next big goals.” 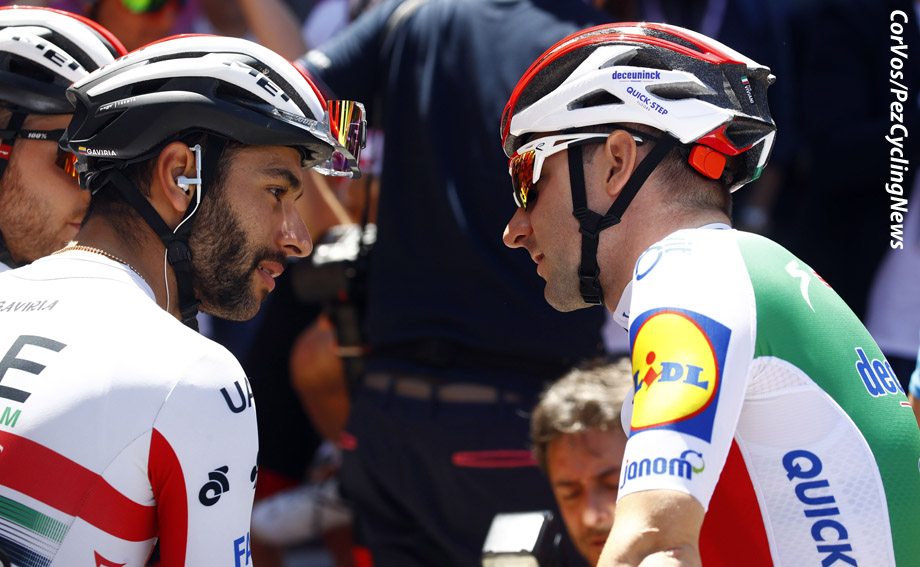 It was to be a short stage for Gaviria 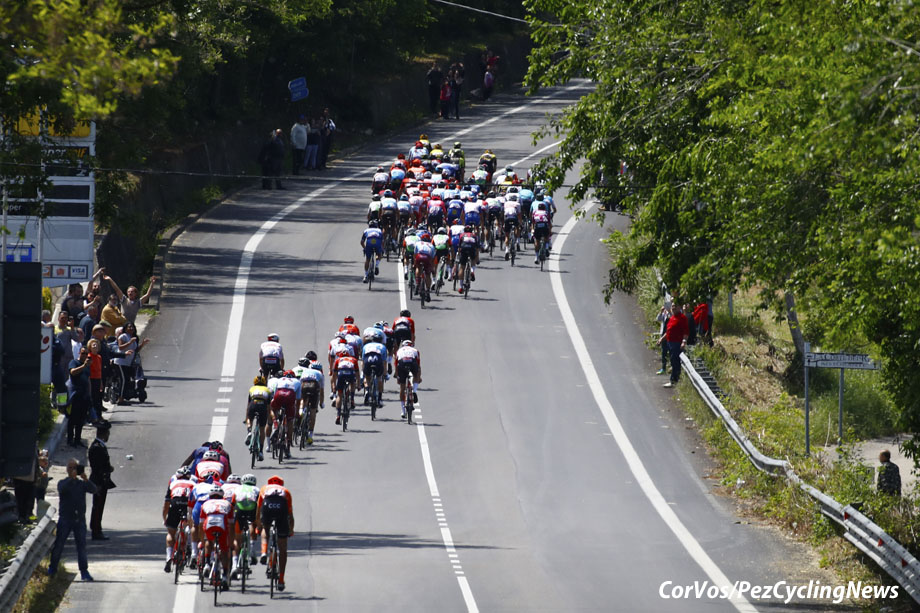 It took a while before the ‘correct’ break got away

There was a problem for the leading group, in that the Bahrain-Merida team were not happy with the escape and did not want to give these riders too much space, and so they were soon caught. This was the signal for Thomas De Gendt to make an attack. 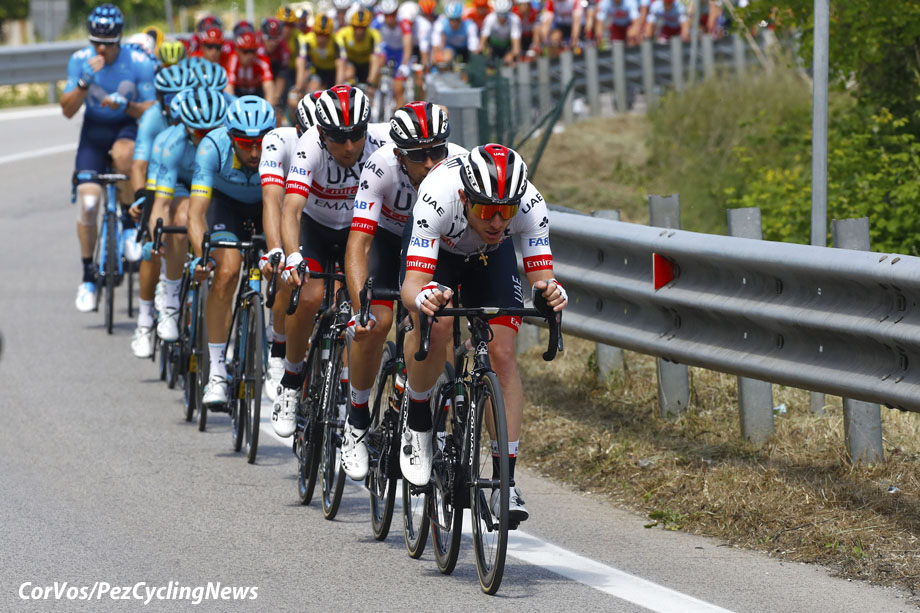 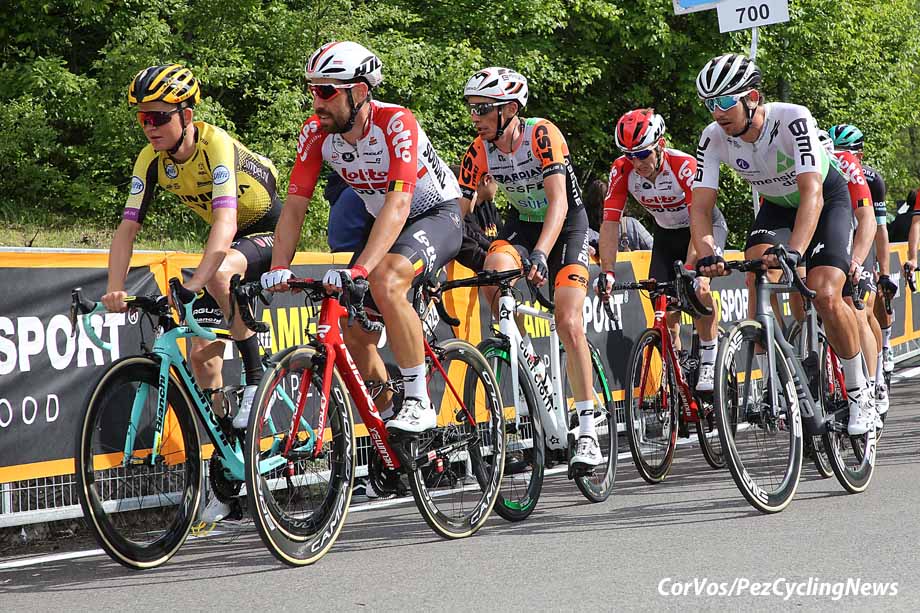 It was De Gendt who started the action

Bahrain-Merida decided that this combination was okay to be given the green flag. Their lead was limited to a 1:30, since UAE Team Emirates did not want to give up the pink jersey. This reduced the lead to one minute, but the race was on. 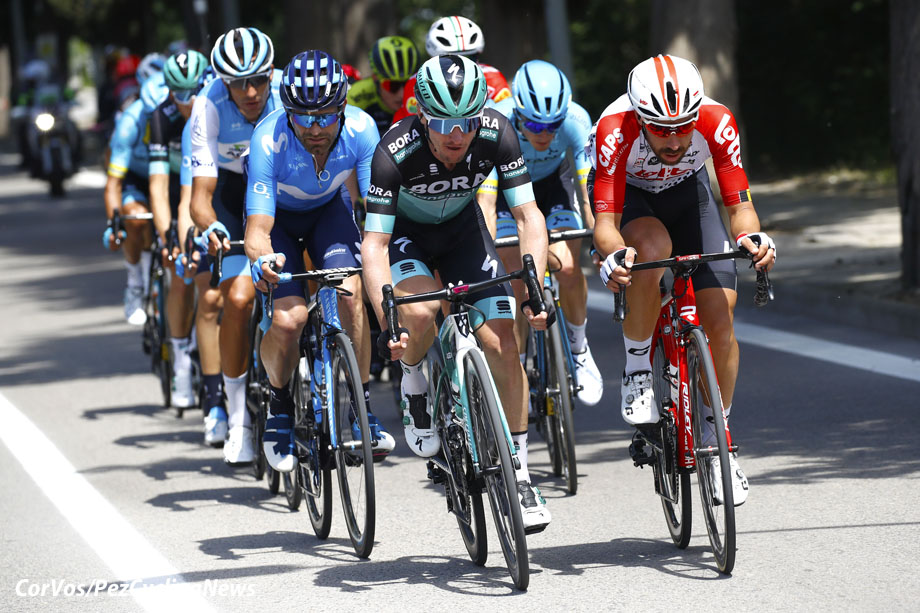 The front group managed to slowly stretch their lead, giving overall leader Conti something to worry about, especially when the experienced Rojas, 4th at 2:19, rode into the virtual pink jersey. Fortunately for UAE Team Emirates, Bardiani-CSF and Trek-Segafredo also started to work at the front of the peloton, for no apparent reason. Not for the stage win anyway. 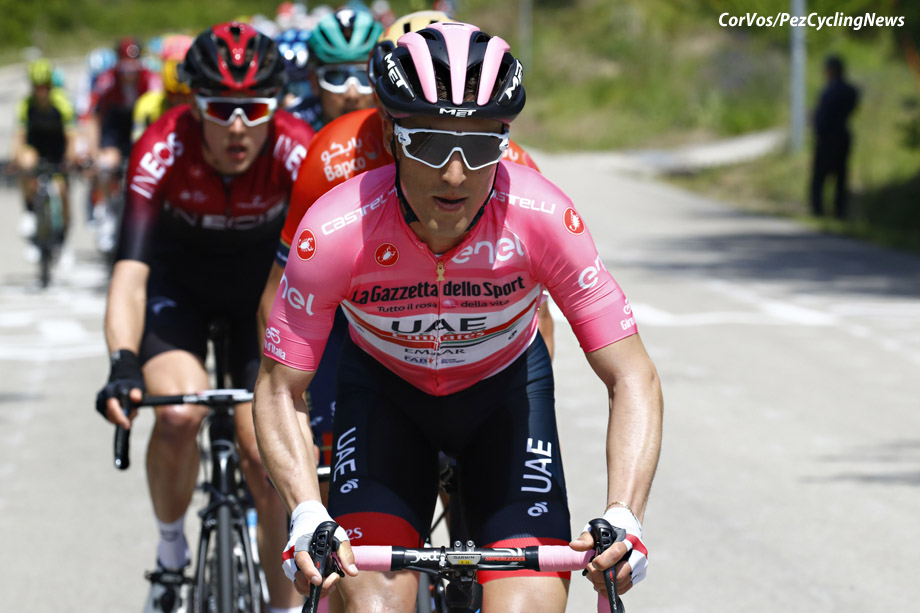 Conti was worried at one point

The escape had a sufficient lead for the hilly final, 10 kilometres from the finish line with the climb to Torrione. The race exploded on this 3 kilometre slope, thanks to Hamilton. The Australian from Mitchelton-Scott was clearly in good form, but he couldn’t get Formolo, Bilbao, Cattaneo and Gallopin out of his wheel. On the next descent; Rojas managed to catch the front five riders, and then immediately attacked. The Movistar rider immediately had a few meters of a gap. 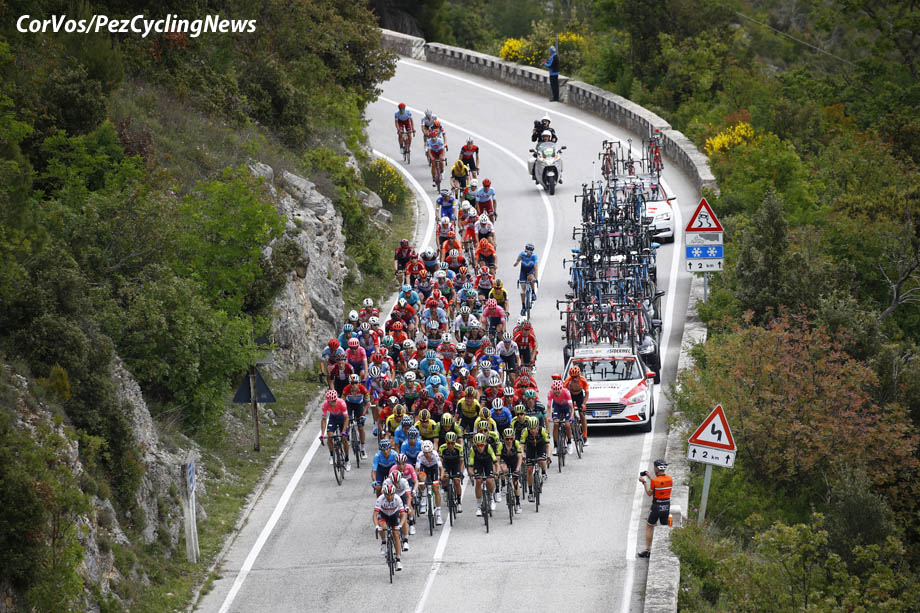 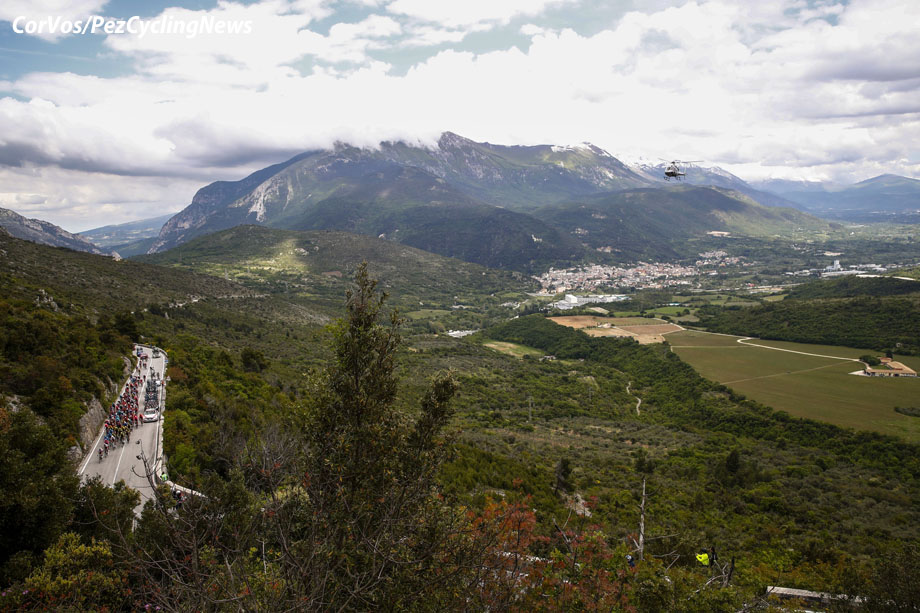 This turned out not to be enough, as Formolo managed to catch him 2 kilometres from the finish, followed by Cattaneo, Gallopin and Hamilton. It was Bilbao that managed to take full advantage of a moment of calm. The Astana rider accelerated at a kilometre and a half out from the finish. 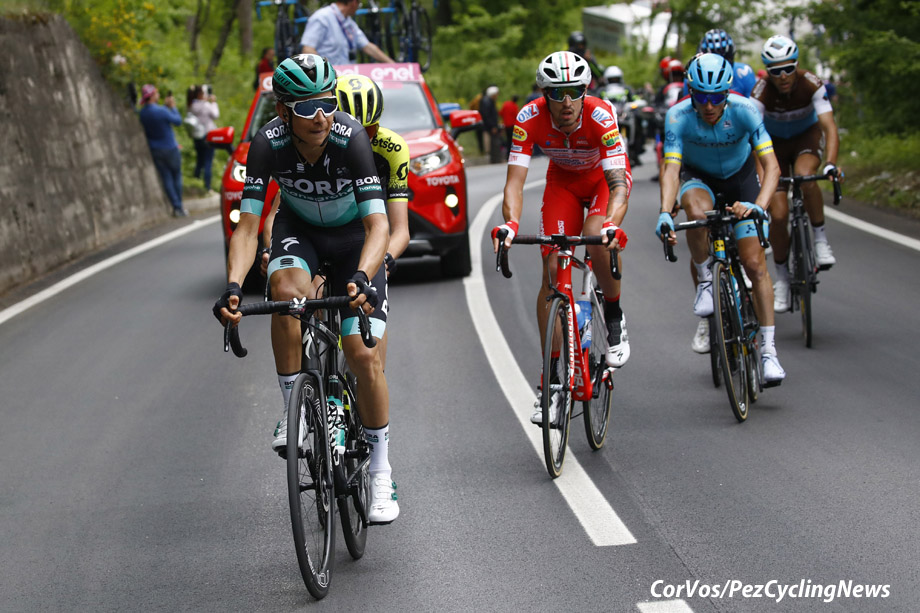 Formolo was a strong third

There was a moment of hesitation among the pursuers, and Bilbao managed to take 5 seconds. In the final last kilometre, the Basque died a thousand deaths, but both Cattaneo and Formolo were unable to close the gap and Pello Bilbao had a fine Giro d’Italia win to add to his palmarès. 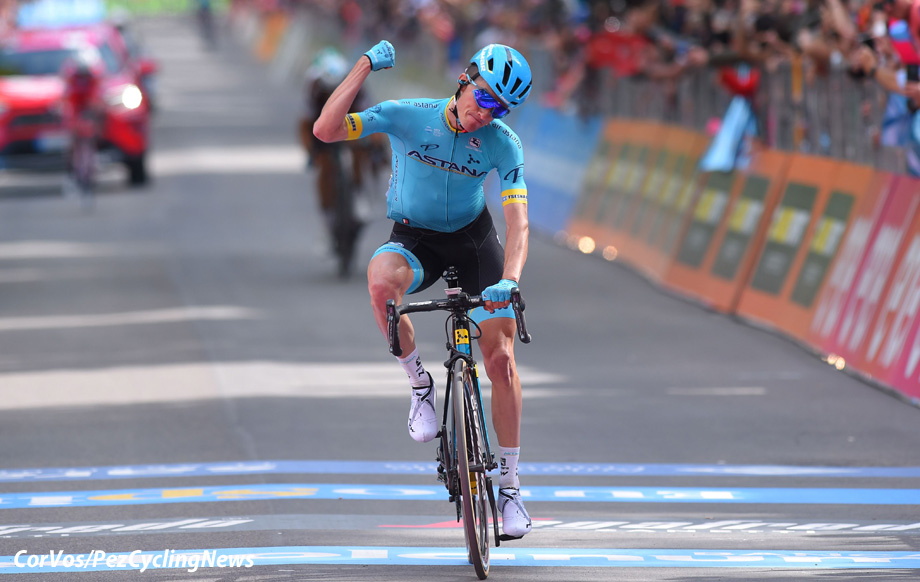 Stage winner, Pello Bilbao (Movistar): “It’s a really important day for me today. It took me a long time to get my first stage win in a Grand Tour. It was a very big advantage to have two riders in the breakaway. Andrey [Zeits] pulled a lot. Dario [Cataldo] was our designated rider but it was such a hard and complicated stage that eventually who made the breakaway was improvised.” 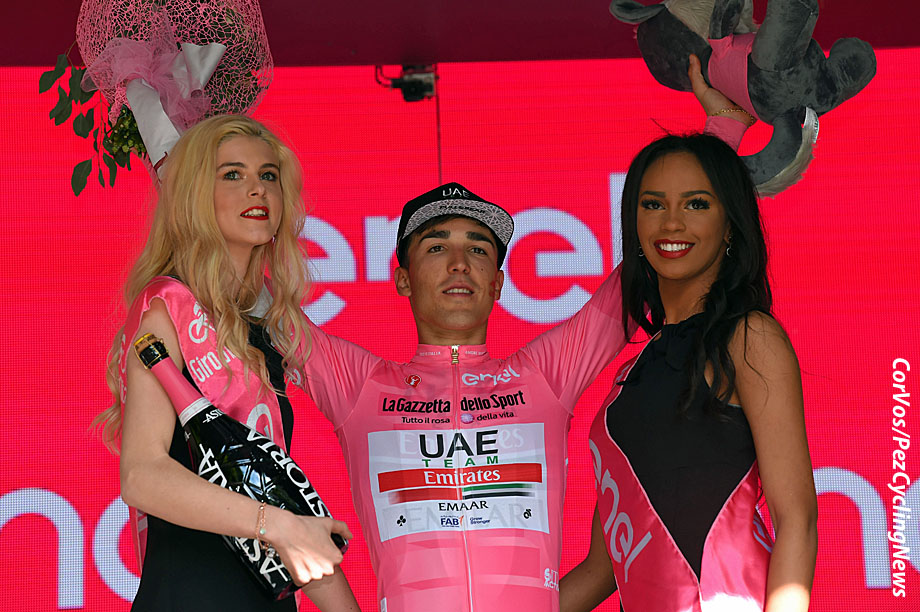 Another day in pink for Conti

Overall race leader, Valerio Conti (UAE Team Emirates): “It’s been very difficult to retain the Maglia Rosa because it looked like the whole peloton wanted to break away today. There were strong GC riders like Rojas and Bilbao at the front. Luckily the UAE Team Emirates is very strong and dedicated too. I’m very happy to keep the lead.”