By Alastair Hamilton On Oct 14, 2020
Share
Like PEZ? Why not subscribe to our weekly newsletter to receive updates and reminders on what's cool in road cycling?

Stage 11 Race Report: A real sprinter’s day and it was the top sprinter of the season, Arnaud Démare (Groupama-FDJ) who showed his top form… By a bike length. All the talk before the stage was ‘how to beat the Frenchman?’ None of the plans worked and the French champion and points leader took his fourth stage win of the 2020 Giro. João Almeida (Deceuninck – Quick-Step) holds the pink jersey for another day. 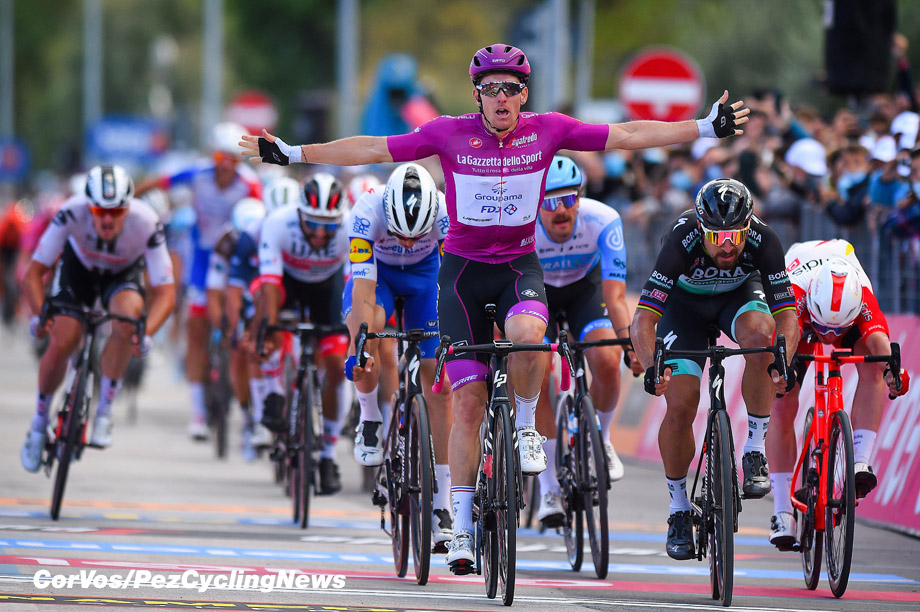 Arnaud Démare has added the eleventh stage of the Giro d’Italia to his Palmarès. In the resort town of Rimini he was the fastest in the bunch sprint for the fourth time this Giro. Peter Sagan was second, Álvaro José Hodeg third. 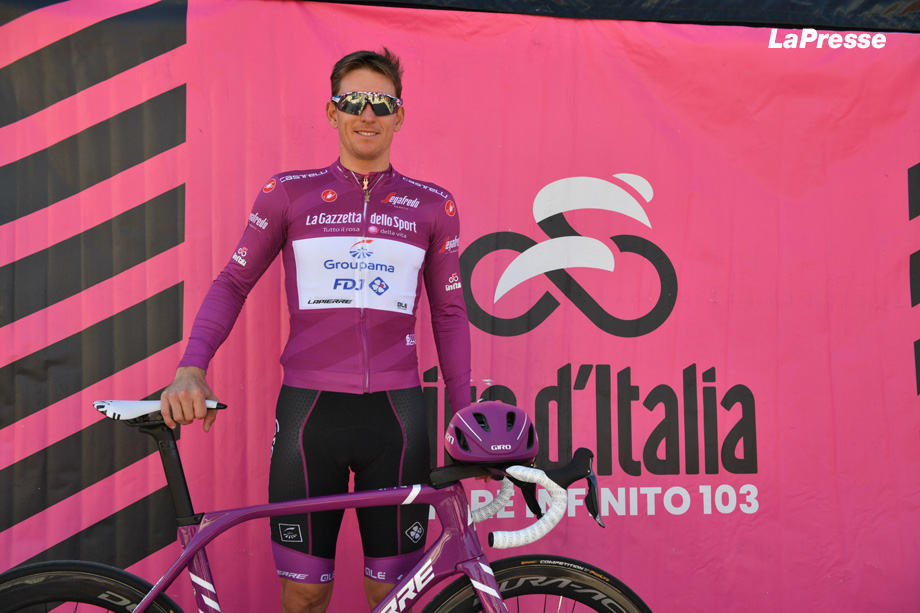 Stage 11 – Porto Sant’Elpidio-Rimini – 182km
The profile is almost completely flat. The route follows nearly the entire Strada Statale Adriatica, with just a slight diversion to climb up Monte San Bartolo, coming from Pesaro, after 100km on wide and mostly straight roads. The route continues straight along the ss. 9 Via Emilia for the following 20km, and then takes in a few mild undulations around Misano Monte, Coriano and Cerasolo before heading from Santarcangelo di Romagna to the finish in Rimini.

Final KMs
From -5 to -2 km, the stage finale is very demanding. The route tackles a long succession of corners on well-paved and wide roads, with a narrow passage 2,500m from the finish. After running straight for more than 1km, the route takes two wide left-hand bends, 100 meters apart The last one leads into the home straight (600m, on 8m wide tarmac). 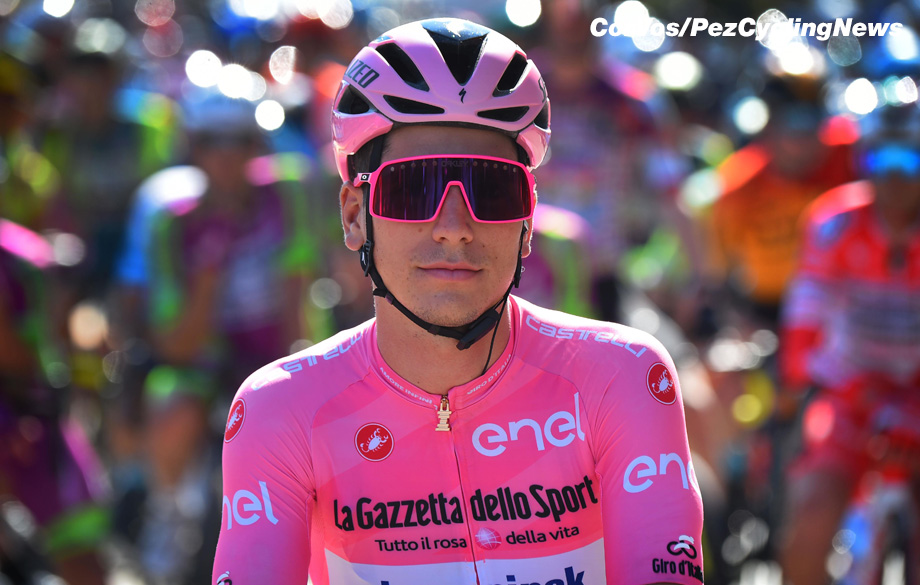 The day after Peter Sagan’s impressive stage victory in Tortoreto Lido, for which even his main competitor for the points competition, Arnaud Démare, had to take his hat off. The Giro d’Italia started from the resort of Porto Sant’Elpidio, over 182 kilometres, the course led to the tourist town of Rimini, where it would be a day for the sprinters. The coastal city is linked to Marco Pantani, who was found dead here in a hotel room in 2004. 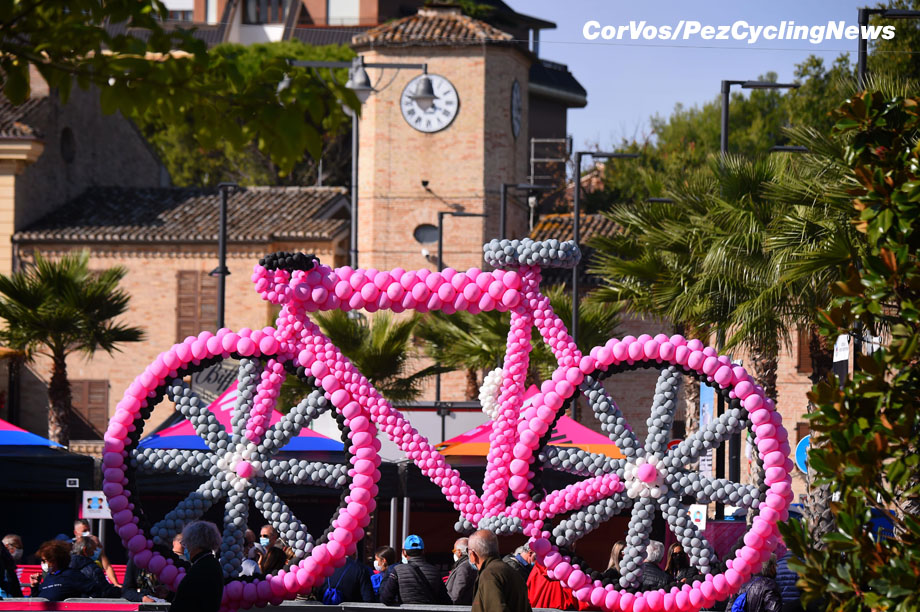 Big pink bike at the start in Porto Sant’Elpidio

Stage 11 kicked off just after noon under sunny conditions and a moderate southeast wind. A leading group with five men escaped: Marco Frapporti (Vini Zabù-KTM) joined forces with the Bardiani couple Fabio Mazzucco and Francesco Romano, Mattia Bais (Androni) and Sander Armée (Lotto Soudal). Frapporti and Armée were the most experienced men in the escape, both are in their mid-thirties, Bais (23), Mazzucco (21) and Romano (23) are all at the start of their careers. They were able to take a 4 minute lead from the peloton, where the sprinter teams Groupama-FDJ for Démare, Cofidis for Viviani and UAE Emirates for Gaviria set the pace. 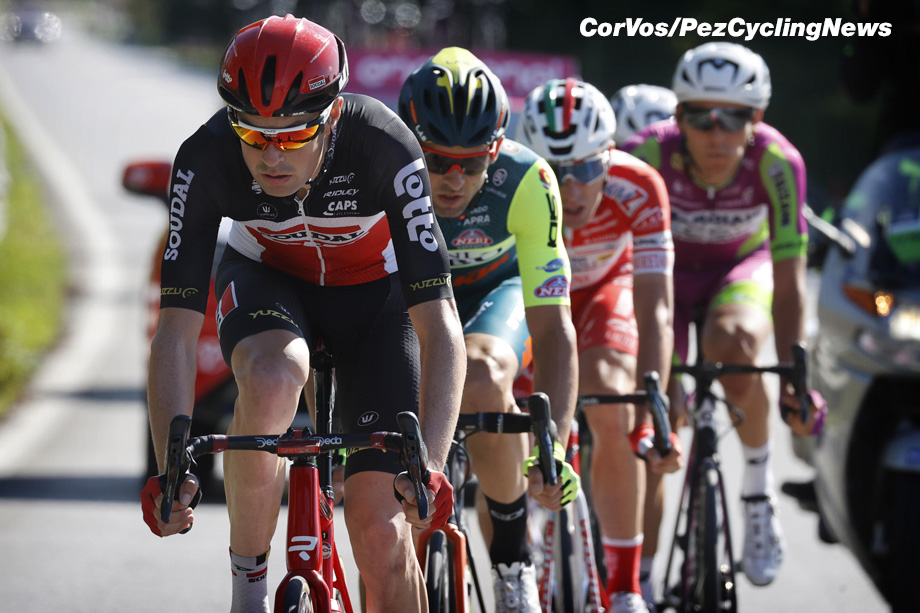 The lead for the five fluctuated between 3 and 4 minutes for a long time. After 105.9 kilometres they reached the first intermediate sprint in the port and seaside resort of Pesaro, Romano beat Frapporti in the sprint duel. Points were also at stake for the peloton, Démare was not the fastest and Sagan took a point back. 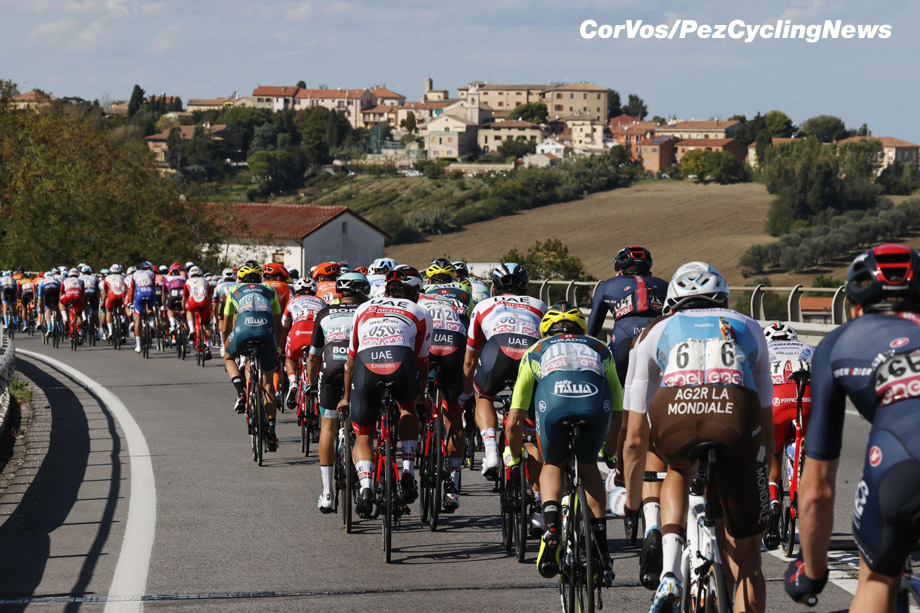 The peloton were waiting for a sprint

Shortly after the intermediate sprint, the road went up the Monte San Bartolo, where Bais had the strongest legs. The Italian took 3 points, but that wouldn’t affect Ruben Guerreiro’s blue jersey. With 70 kilometres to go the sprinter teams started to increase the speed. Both Groupama-FDJ and UAE Emirates put several men on the front as Cofidis watched. 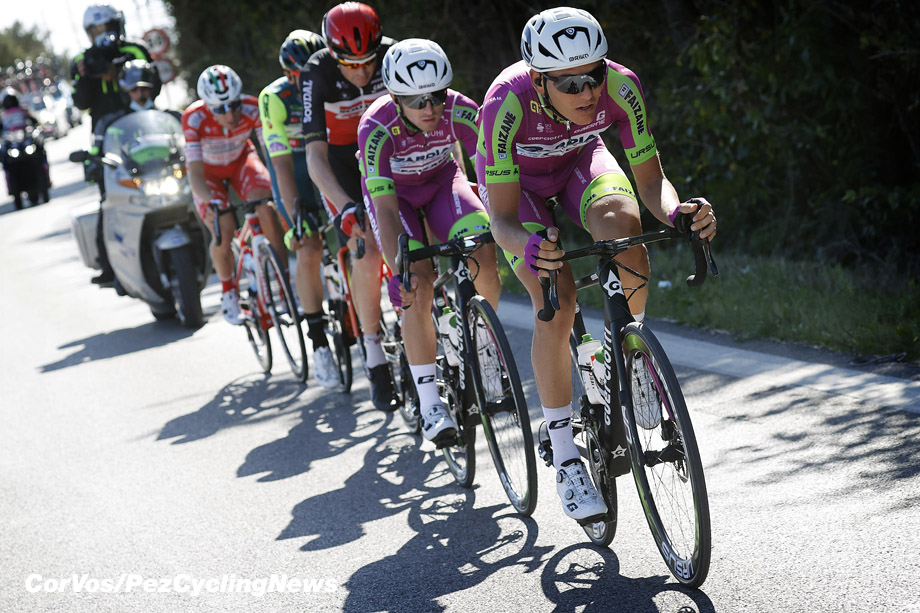 The break on the way to Rimini

After 144 kilometres, at the intermediate sprint in Coriano, the lead had already been cut to 2 minutes. Romano took the three points after Frapporti started his sprint too late. On the climbs after the sprint, Armée and Bais rode away from their escape companions. In the peloton Elia Viviani crashed on a round-about when he was hit by a motorbike. The damage was not too bad for the Italian sprinter and with the help of his teammates he got back to the peloton. Partly due to the crash, the front runners were able to stay away a little longer. Just over 20 kilometres from the line, Bais was dropped by Armée, who was now solo off the front.

The road to Rimini

As the line got closer and the difference was still just under 2 minutes with 15 kilometres to go, Armée’s chances started to look possible. Although, when the sprinter teams shifted up a gear, his lead quickly diminished. At 6 kilometres from the finish, the Belgian was caught and the finish in the streets of Rimini was set. 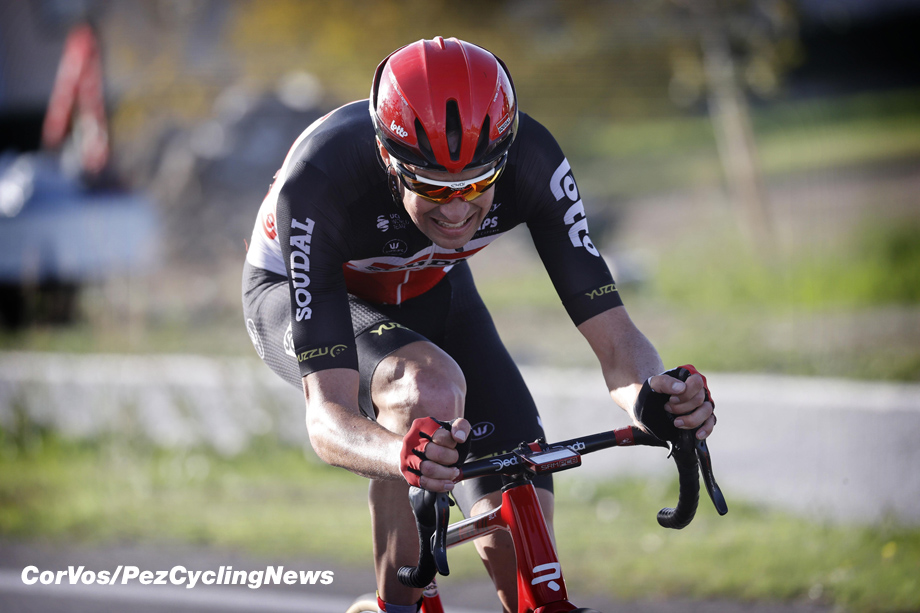 Sander Armée went solo, but was caught with 6 to go

Israel Start-Up Nation led the peloton into the last 5 kilometres. The Israeli team, with Davide Cimolai and Rick Zabel, still had two fast men on hand. In the last 3 kilometres UAE Team Emirates came to the front, but it was Groupama-FDJ who had the initiative again with 2 kilometres to go. In the last kilometre the French team were in full control. 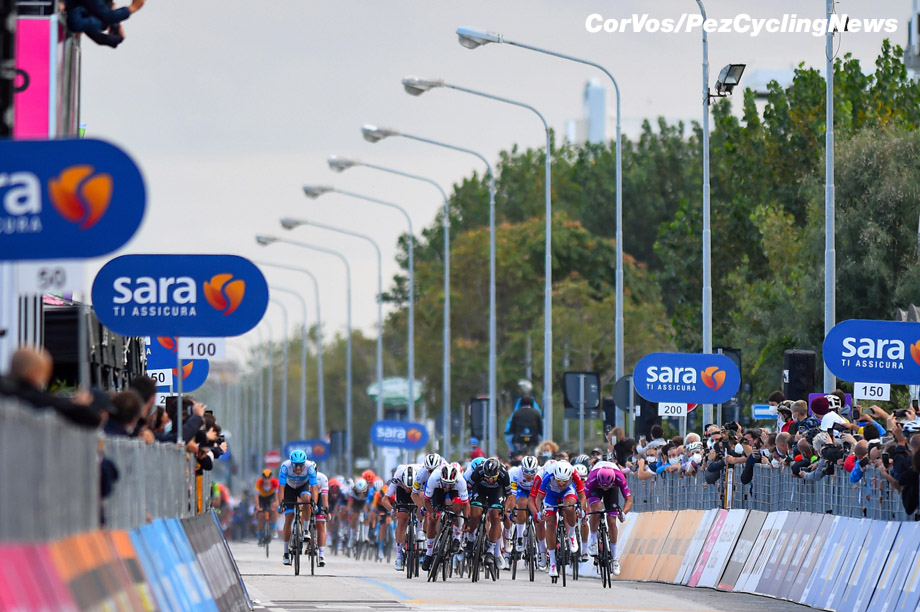 There was only going to be one winner – Démare

Démare was sat perfectly with Fernando Gaviria and Peter Sagan on his wheel. In the last two hundred metres the French sprinter started his jump as Sagan opened his effort. However, there was nothing to be done against Démare, who won his fourth stage victory in this Giro. Sagan finished second, ahead of Álvaro José Hodeg. Gaviria didn’t have the legs and had to settle for seventh place. 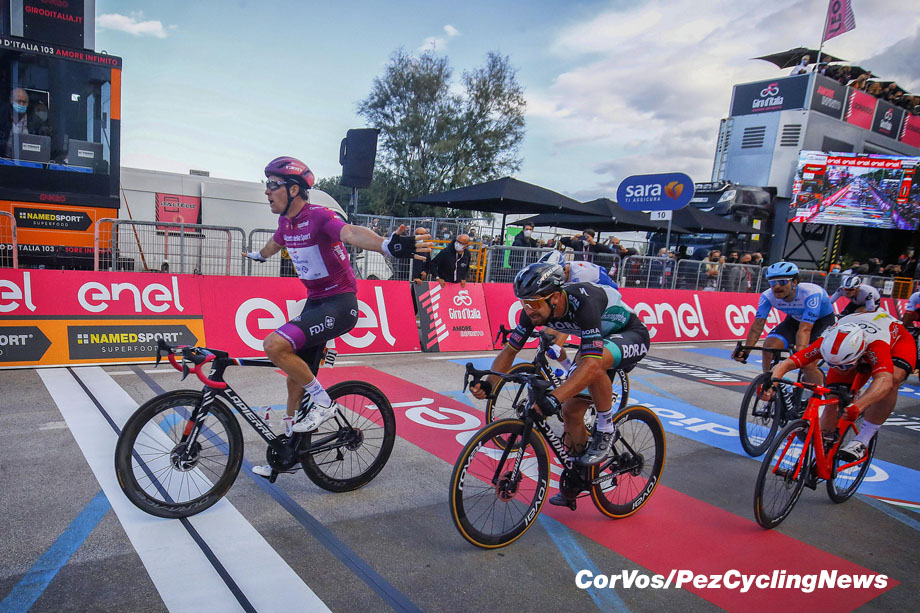 Another second place for Peter Sagan

Stage winner and points leader, Arnaud Démare (Groupama-FDJ): “The youngsters of the team have done an enormous work to bring Sander Armée back. My three lead out men delivered me in a perfect position and I felt a lot of strength in my legs to launch my sprint. Coming to the Giro I didn’t think I’d get four stage wins. Hats off to my team mates!” 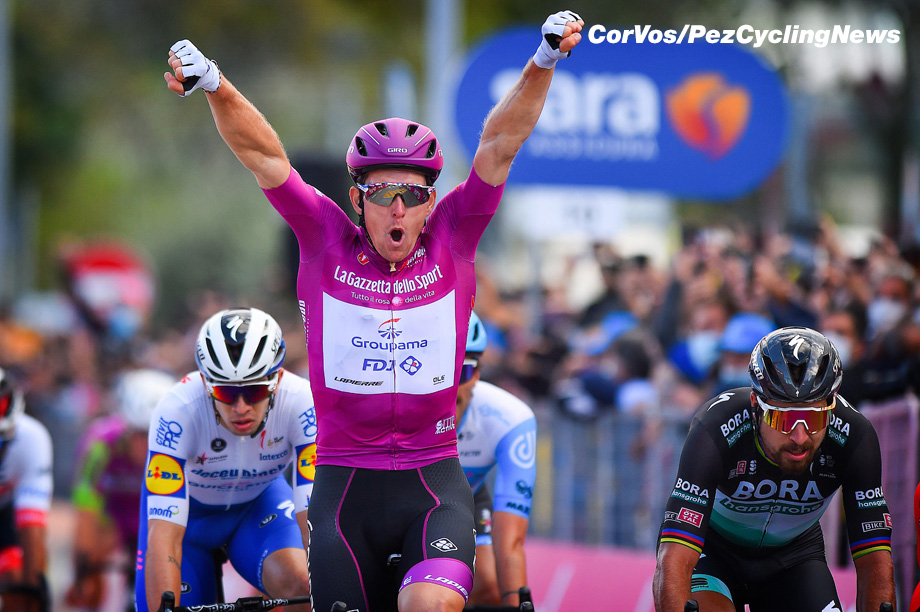 The Frenchman made it look easy again

Maglia Rosa, João Almeida (Deceuninck – Quick-Step): “The first part of the stage was fairly quiet, then a frenetic finish with many teams who wanted to race in the front. Tomorrow is a very undulating stage, there will be some attacks but we will be prepared.”

# Keep it PEZ for the best Giro coverage. #

Motivate Your Mind When Your Body Isn’t