Stage 12 Race Report: A crazy day on the home roads of Marco Pantani, saw many riders suffer from the cold and wet conditions that split the race to pieces. The stage victory went to Jhonatan Narváez (INEOS Grenadiers) ahead of an unlucky Mark Padun (Bahrain-McLaren). The pink jersey of João Almeida was safe after strong work from the Deceuninck – Quick-Step team. 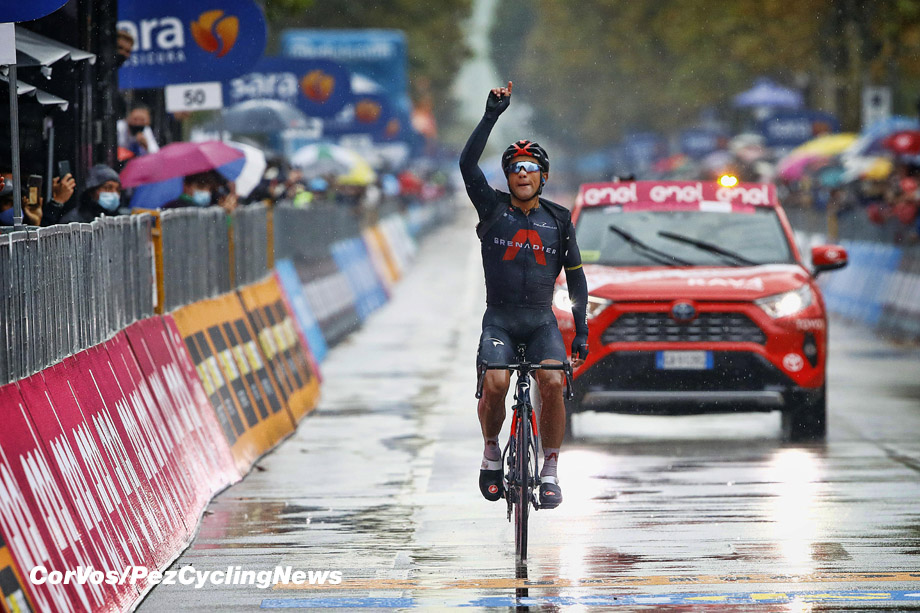 INEOS Grenadiers have taken their third stage victory in the 2020 Giro d’Italia. The British team had already won two stages with Filippo Ganna, today it was Jhonatan Narváez who crossed the line first. The Ecuadorian proved to be the strongest and the luckiest in a soaking wet Cesenatico. 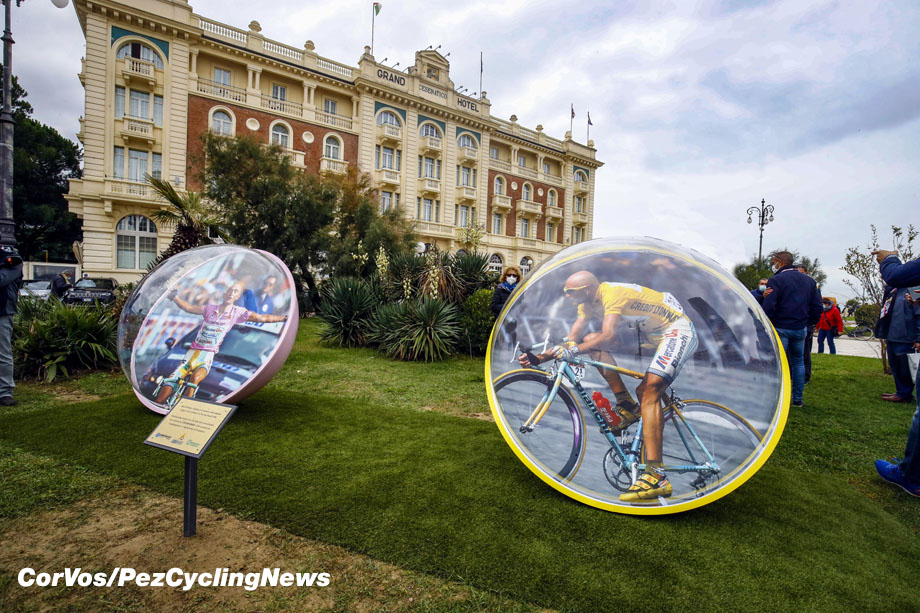 Start and finish in the home town of Marco Pantani – Cesenatico

Stage 12 – Cesenatico-Cesenatico – 204km
The stage follows the same route as the Gran Fondo Nove Colli. With the exception of the first and of the last 25km, the remaining 150km do not even feature a single flat meter to let the bunch catch their breath. The route is an endless succession of climbs and descents, with double-digit gradients at points, often on narrow and worn-out roads.

Final KMs
From 5 to 3km remaining to the finish, the road is relatively wide and mainly straight, with several roundabouts. With 2.5km to go, the route bends as it descends from the railway flyover, and then passes underneath, onto a narrow roundabout. With 1.4km remaining, one last left-hand bend leads into the home straight (featuring two speed bumps), on 7.5m wide tarmac. 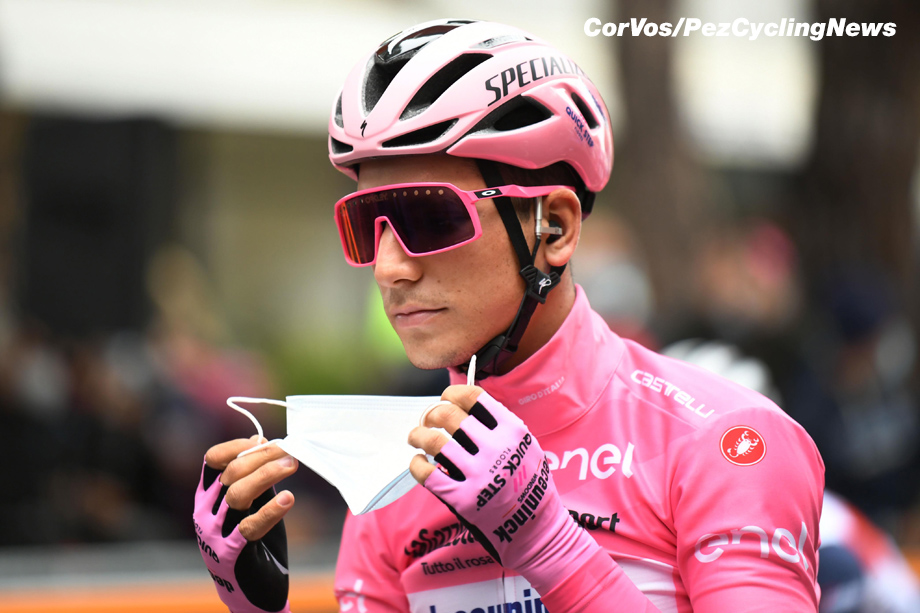 Stage 12 could be decisive for the pink jersey

The twelfth stage started under not too sunny conditions. Thirteen riders managed to escape from the peloton: François Bidard, Simon Pellaud, Manuele Boaro, Mark Padun, Cesare Benedetti, Joey Rosskopf, Jesper Hansen, Simon Clarke, Albert Torres, Victor Campenaerts, Jhonatan Narváez, Maximiliano Richeze and Etienne van Empel. The peloton let them go and quickly increase the lead to more than 6 minutes. Between the leading group and the peloton, Hector Carretero had a hard job ahead of him. Carretero had to try very hard to make the crossing to the front riders, but was stuck for a long time at two minutes and needed some help from the team car. Carretero took full advantage of a very sticky bottle to close the last gap. 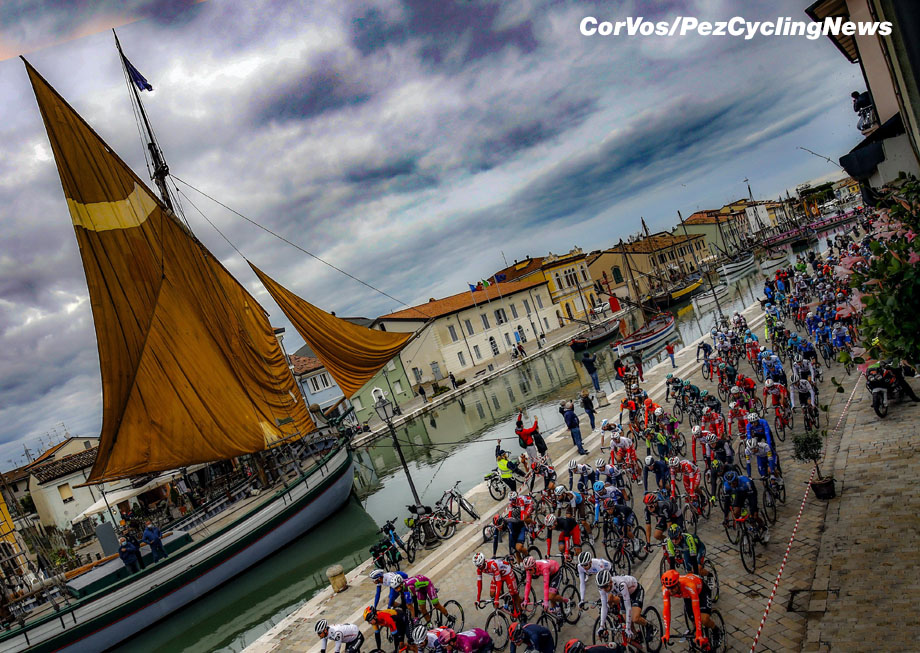 The start from the Port of Cesenatico

In the peloton, the men of Deceuninck – Quick-Step rode at a leisurely pace for leader Joāo Almeida, allowing the break to gain more than 13 minutes and dream of the stage victory. With more than 120 kilometres ridden, NTT Pro Cycling decided to take the lead in the peloton. The South African team quickly managed to take 7 minutes from the leaders. Was team leader Domenico Pozzovivo, fourth on GC, keen to make a Pantani-esque victory in Cesenatico? The escapees had to be caught first. 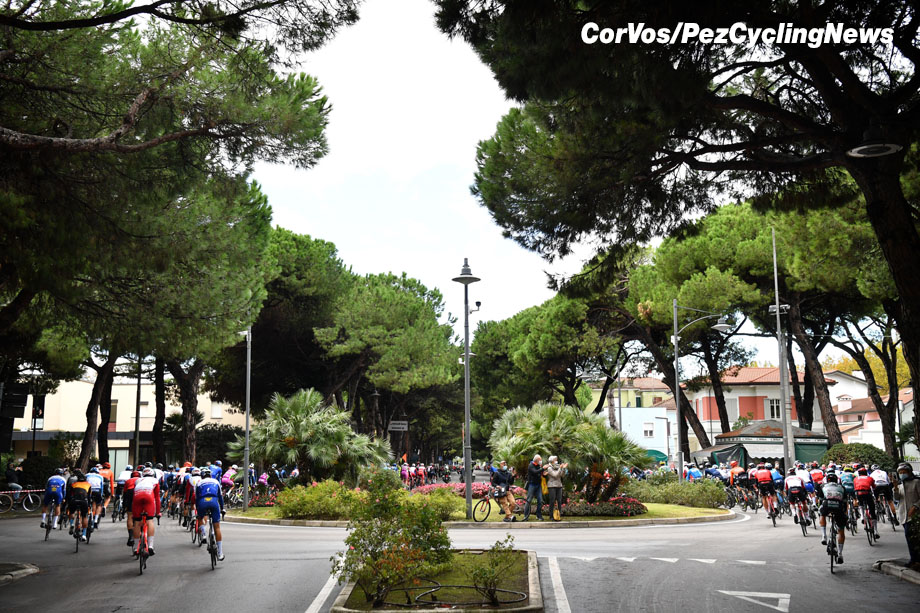 Due to the amount of climbing during the stage, the leading group was slowly but surely thinned out. It promised to be a tough finalé towards the home town of Marco Pantani, it also started to rain. Under the impulse of NTT, the peloton was decimated, fast men like Arnaud Démare and Peter Sagan had to let go of the front group. At the front the men were separated from the boys. 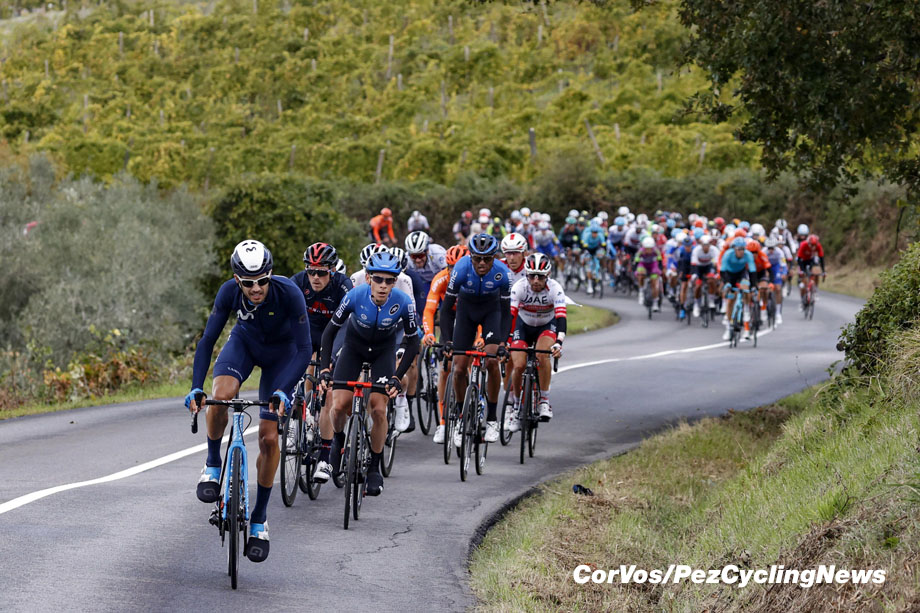 The formation of the ‘Break of the Day’

The leading group exploded on the Madonna di Pugliano (9.1km at 5.5%). Rosskopf, Pellaud, Hansen, Narvaez, Boaro, Padun and Bidard were left at the front, followed by a brave Van Empel. The seven front riders still had a lead of more than 4 minutes on the group of favourites at the top of the Pugliano, but still had to survive 60 kilometres to the finish. 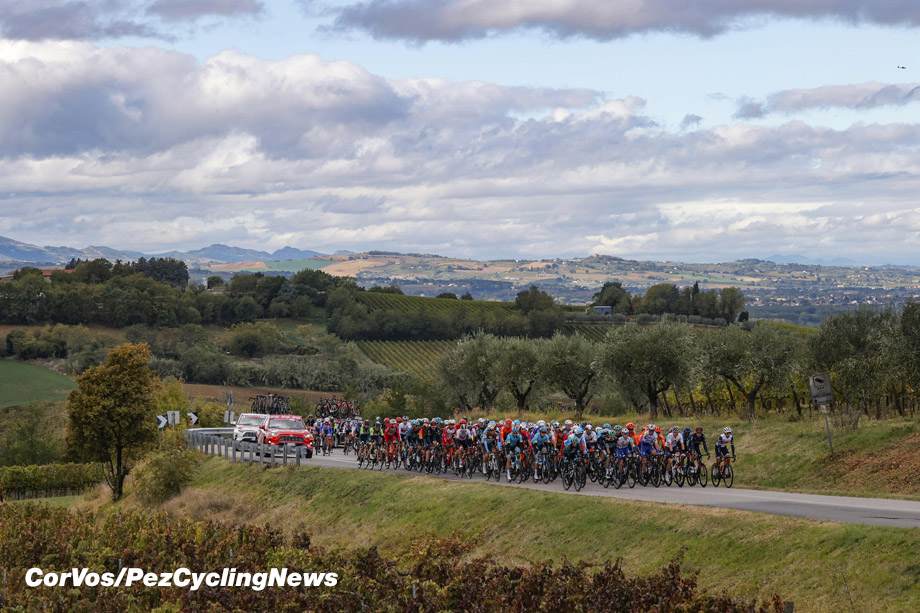 The peloton at the start of a long and tough day

On the slippery and treacherous descent of the Pugliano, Clarke shoot off the front. The Australian, who was second in the Amstel Gold Race won by Mathieu van der Poel last year, struggled to keep up with the pace uphill, but this did not prevent him from going down particularly fast. Clarke, together with Narváez and Padun, managed to get away from the others.

Thirteen men in the break at first

Clarke, Narváez and Padun started the Passo delle Siepi together, the penultimate climb of the day, but it did not count for the KOM classification. Clarke soon had to take his own pace and let his two companions go. Narváez and Padun decided to give everything to the finish. Clarke lost more and more ground, the others of the break were two-minutes down. In the peloton two NTT riders were on the front for Pozzovivo. Most of the leaders were isolated and had to go to the team cars for their own rain jackets or last bottle. The favourites for the overall victory would not be winning today, as the lead had increased to more than 7 minutes. 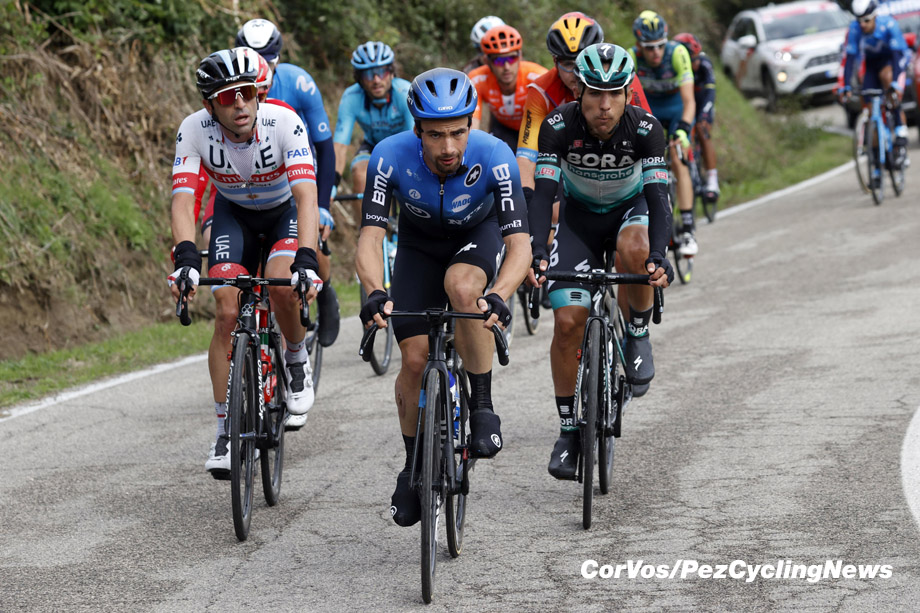 The group of favourites didn’t ease off. On the contrary: the fifteen riders, with the most important classification riders included, kept the pace high. Pink jersey Almeida, Wilco Kelderman, Pello Bilbao, Vincenzo Nibali and Jakob Fuglsang had managed to survive the first serious selection. Just before the top of the Gorolo we finally had an acceleration from Pozzovivo. The Italian climber managed to drop teammate Ben O’Connor, who had been on the front for a long time, the other top-men could follow easily. The GC chase group started together on the descent of the Gorolo, the last climb of the stage, 30 kilometres from the finish, 6 minutes behind the two leaders: Narváez and Padun. 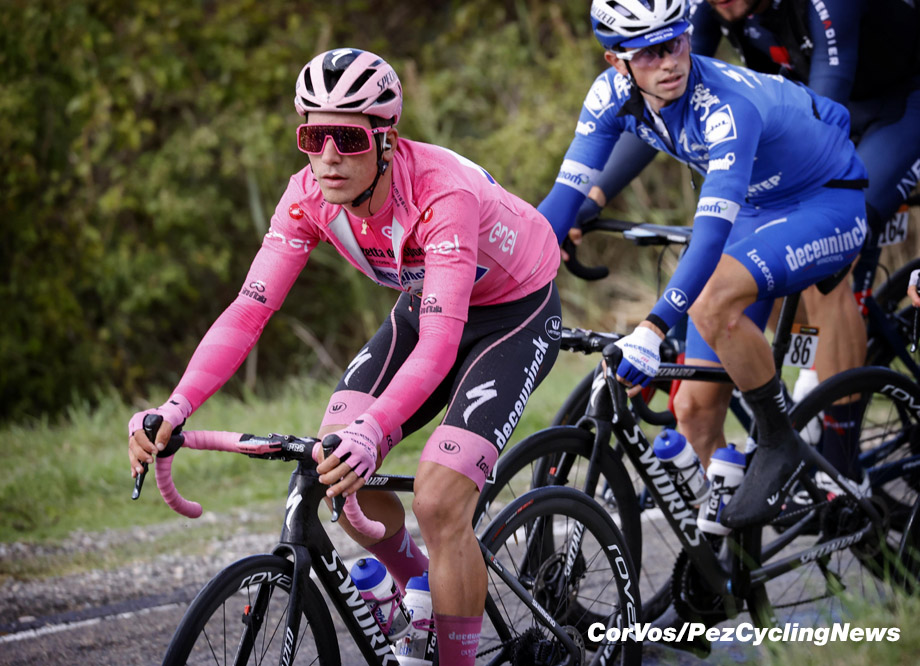 A cold and wet day for everyone

On the descent Padun had a lot of bad luck due to a mechanical at an unfortunate moment. The Bahrain-McLaren rider lost half a minute, but was not going to give up on a stage victory. The promising Ukrainian was getting closer and closer, while Narváez tried to hold him off. The difference between the two men became smaller and smaller. 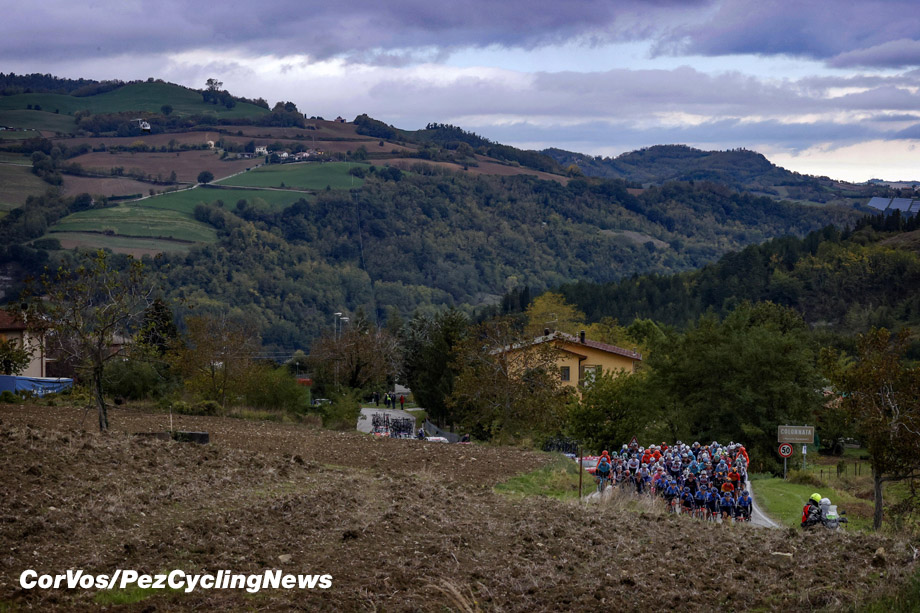 Not a nice day for a bike ride

Padun managed to cut the gap in half and was 13 seconds down in the last 10 kilometres on the INEOS Grenadiers rider. The Ecuadorian did not give up and eventually started to pull away from Padun, who was having more and more difficultly and could not close the last gap. Narváez doubled his lead again and was on his way to his first stage victory in a Grand Tour. 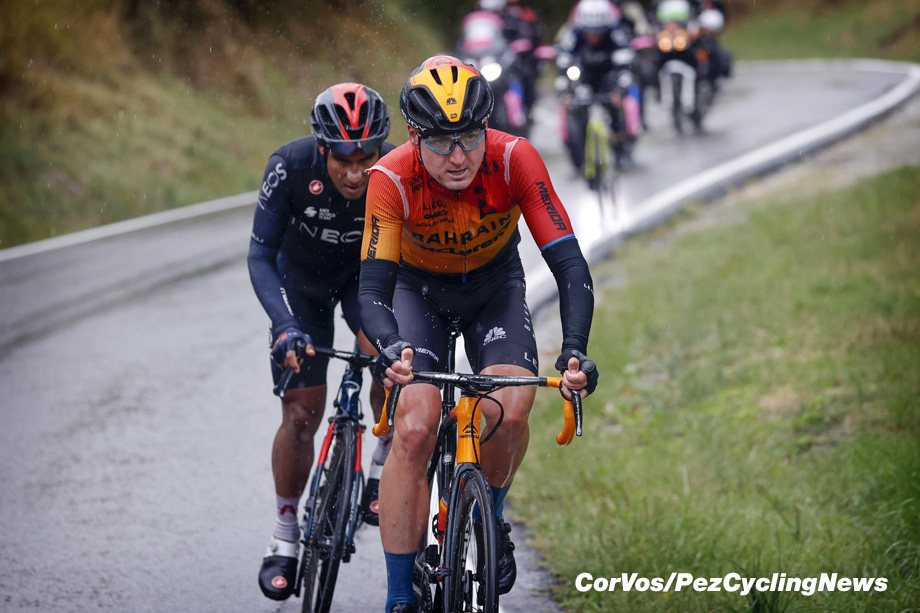 Padun looked good for the win, but a mechanical ended his hopes 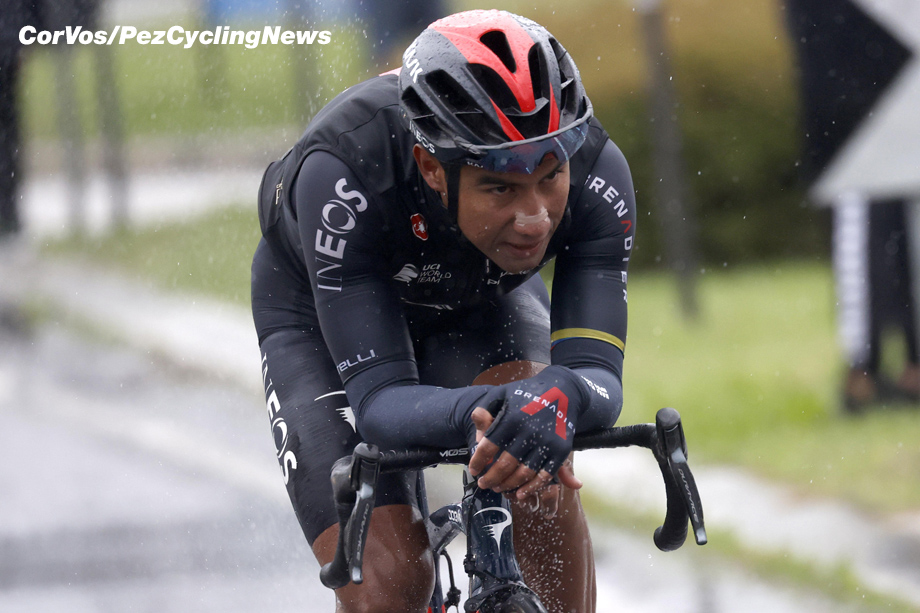 Man against man to the finish

The 23-year-old Ecuadorian had plenty of time in the last kilometre to enjoy his Giro victory. It is not the first victory of the season for Narváez, as he already won the Settimana Internazionale Coppi e Bartali in the run-up to the Tour of Italy. A disappointed Padun crossed the finish line second, Simon Clarke third at almost seven minutes. The GC men all crossed the finish line together. 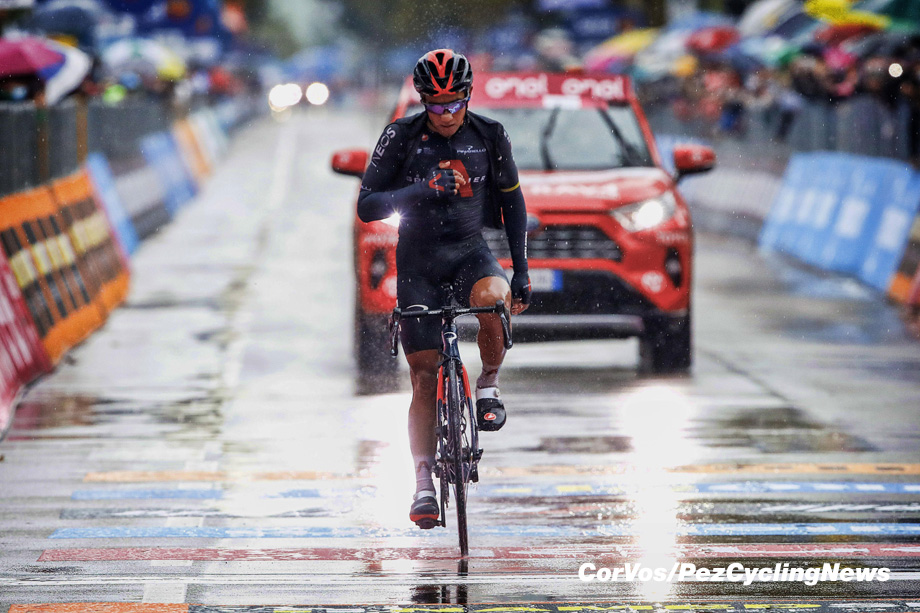 A hard fought win for the Ecuadorian 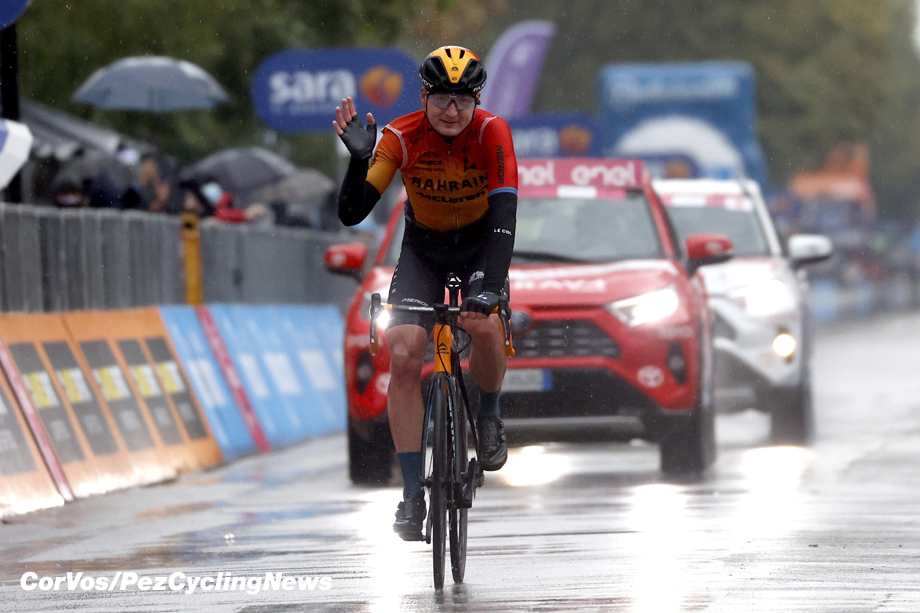 Stage winner, Jhonatan Manuel Narváez (INEOS Grenadiers): “I want to dedicate this victory, my first in the WorldTour, to Nico Portal, I learned a lot from him. Today I woke up with the right spirit and wanted to be the protagonist in this stage. It is not a problem for me to race in the rain, in fact, I prefer it to the hot weather.”

Maglia Rosa, João Almeida (Deceuninck – Quick-Step): “Today was a very tough stage. I am happy to have managed to keep the Maglia Rosa. Once again my team was extraordinary, I’m really grateful to my teammates.”

# Stay PEZ for all the best Giro race reports and photos. #

FLANDERS’20 The PEZ Preview – Who’s Hot For the Hellingen?