Stage 13 Race Report: The flat stage 13 to Monselice had a sting in the tail, actually a double sting. The big question was “would the sprinters make it?” In the end it was the GC men who fought out the sprint aster a strong ride from the Deceuninck – Quick-Step team to split the race. At the line it was Diego Ulissi (UAE Team Emirates) who won from the pink jersey, Joāo Almeida (Deceuninck – Quick-Step), and Patrick Konrad (BORA-hansgrohe) in third. 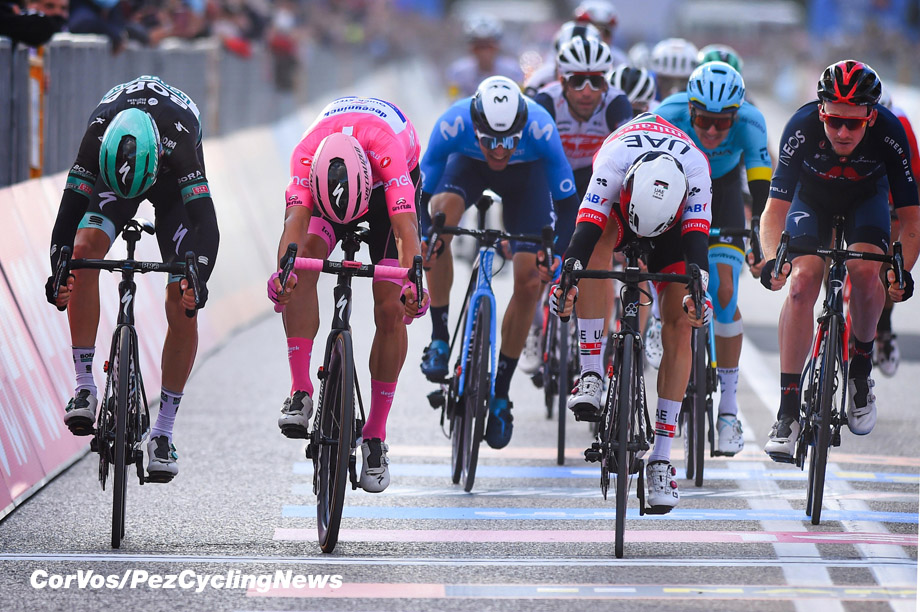 Diego Ulissi won stage 13 to Monselice on Friday afternoon. The UAE Team Emirates rider was the strongest sprinter of a thinned GC group after a 192 kilometre stage. He was narrowly ahead of GC leader João Almeida 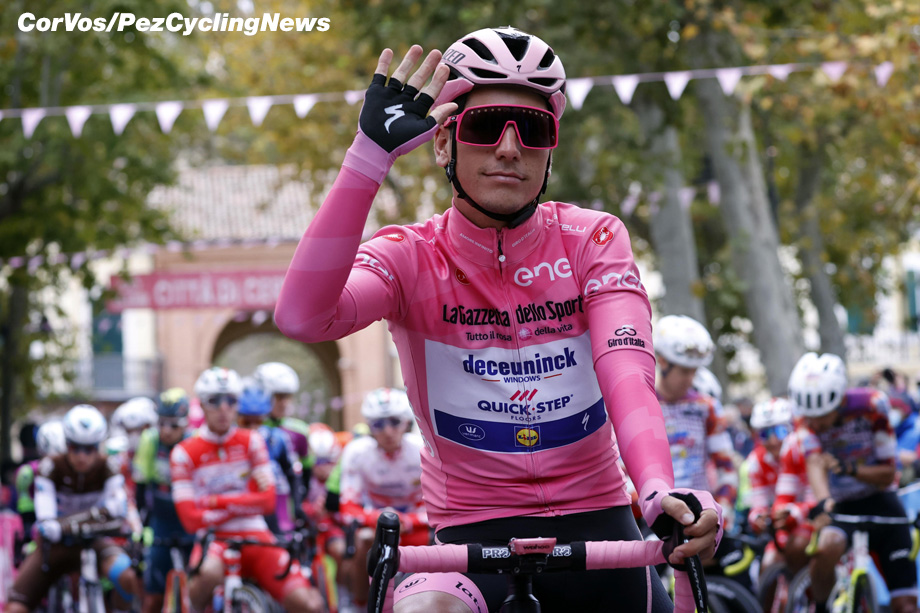 Another day in pink for Joāo Almeida

Stage 13 – Cervia-Monselice – 192km
The stage runs perfectly flat across the Po Plain for 150km, on straight roads (sometimes wide, other times narrower). As it takes its first pass through Monselice, the route draws a long, challenging “semi-circuit” of nearly 40km, with two consecutive harsh climbs. Past Galzignano Terme, the route tackles the Roccolo, taking in three climbs in a row (the Muro di Vallorto, with a maximum gradient of 20%, the Castelnuovo climb and the “actual” Roccolo, max 17%). The roads are relatively narrow, yet well-surfaced. The route drops into Cinto Euganeo and then tackles the Muro di Calaone (maximum slope: 18%), coming from Rivadolmo, before heading for a fast stage finale.

Final KMs
Over the last 15km, the route descends rapidly along a large road with wide hairpins, from Calaone towards Este. Past Este, the route straightens and levels out, all the way to Monselice. With approximately 3km to go, the stage enters the urban area coming from the railway underpass, with one last sharp left-hand corner 400m before the finish, leading into the home straight, on 8m wide tarmac. 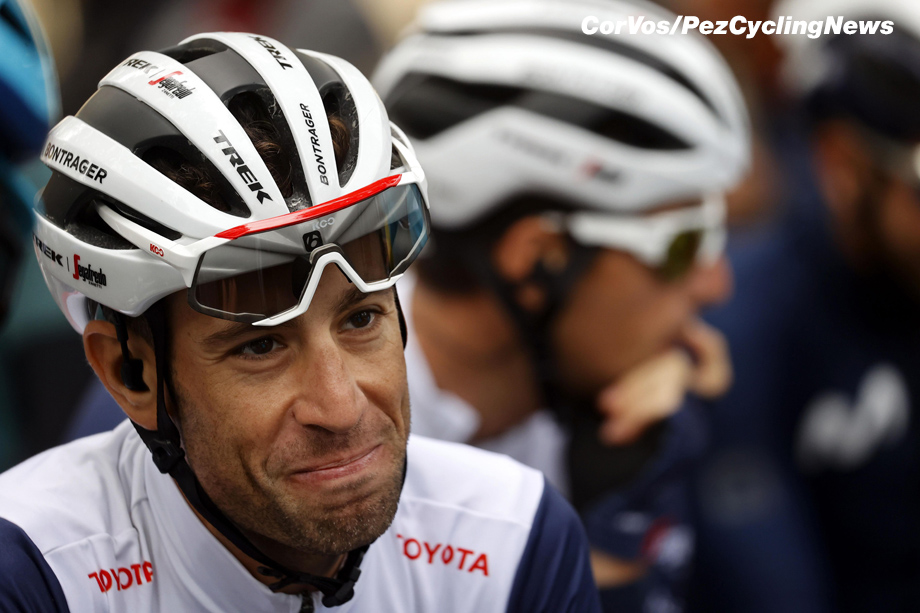 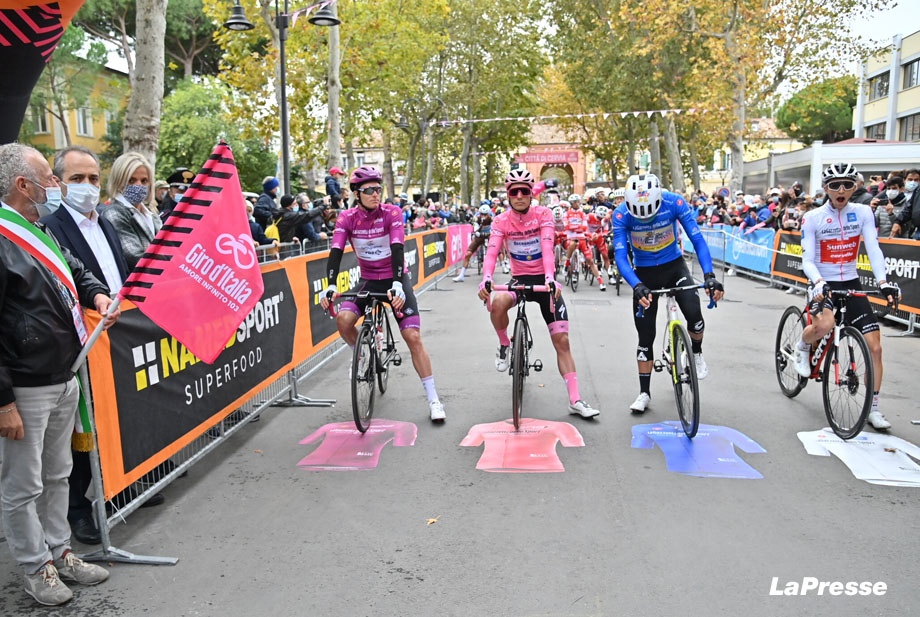 The leader’s jerseys line up at the start 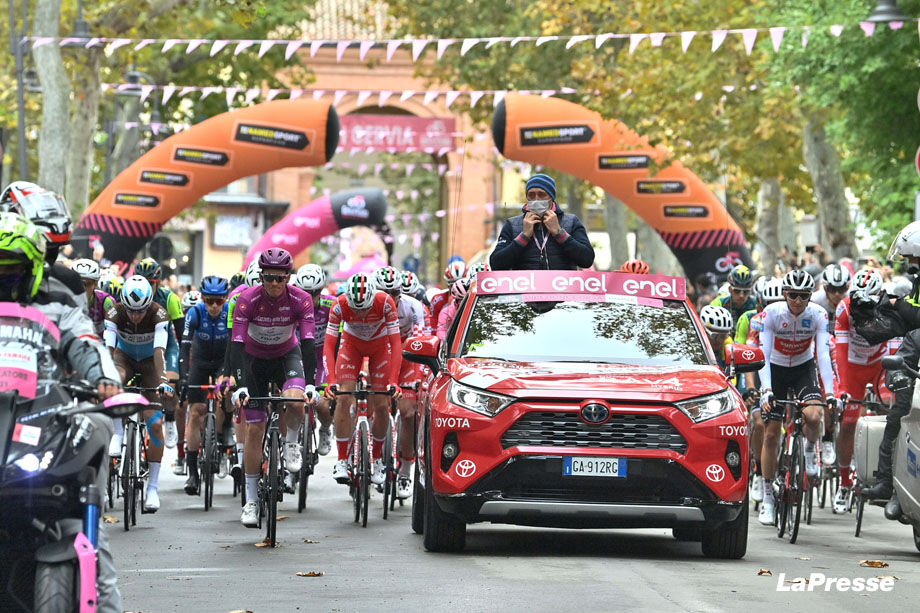 After a relatively calm run up the Po Valley, the race really started in the final section, where a few climbs were on the menu. Under the initiative of the BORA-hansgrohe team, the pace increased and the escape was caught one by one by the peloton. About 17 kilometres before the finish, Tonelli was the last attacker to be caught. The peloton had already split into different groups. 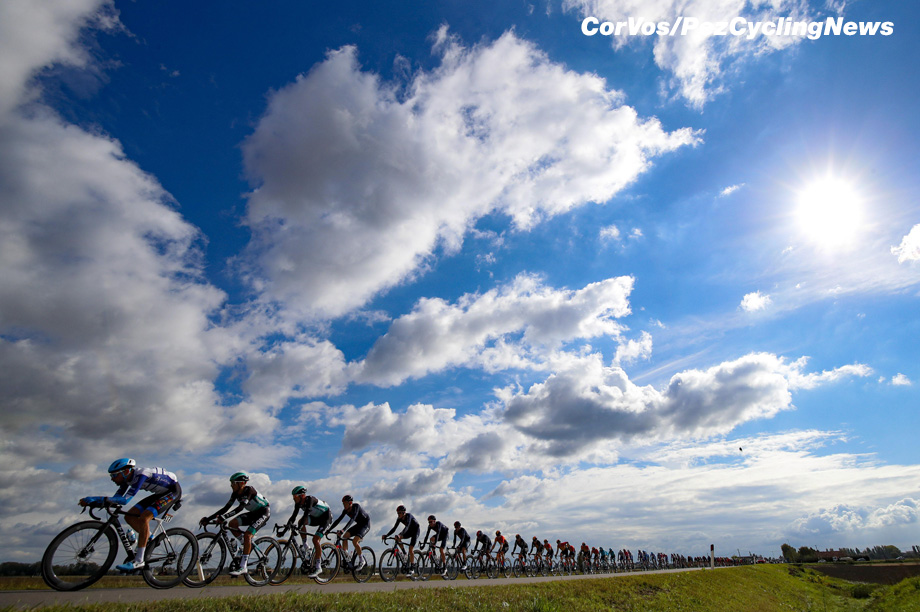 A cool day, but no rain

After the top of the last climb at 15.9 kilometres from the line, Sagan and Démare had missed the move of the front group. A thinned peloton containing all the favourites then pushed on to the finish. Overall leader Almeida, had two teammates with him; James Knox and Fausto Masnada, who immediately went to the front of the group to set a fast pace to hold off the likes of Peter Sagan and any other fast finishers. 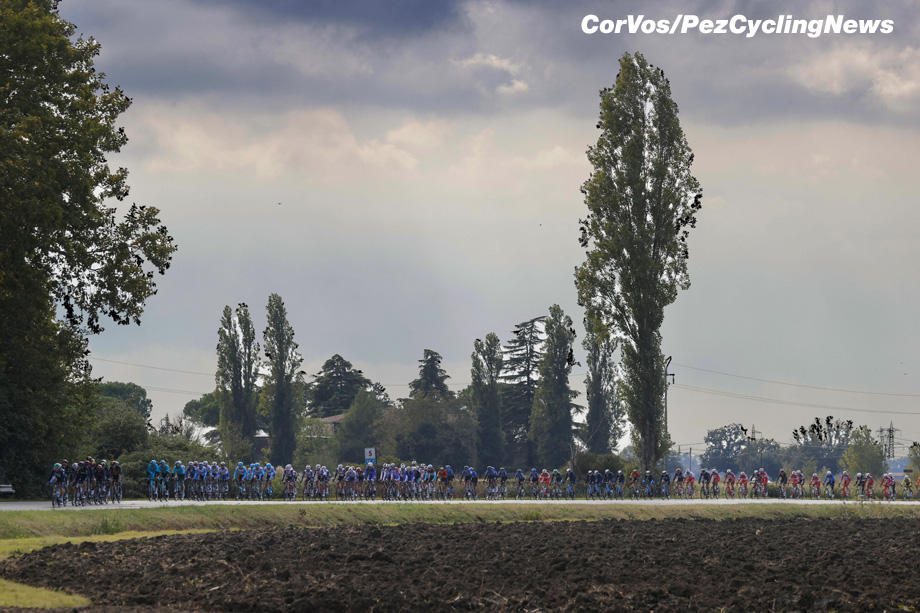 Most of the stage was flat 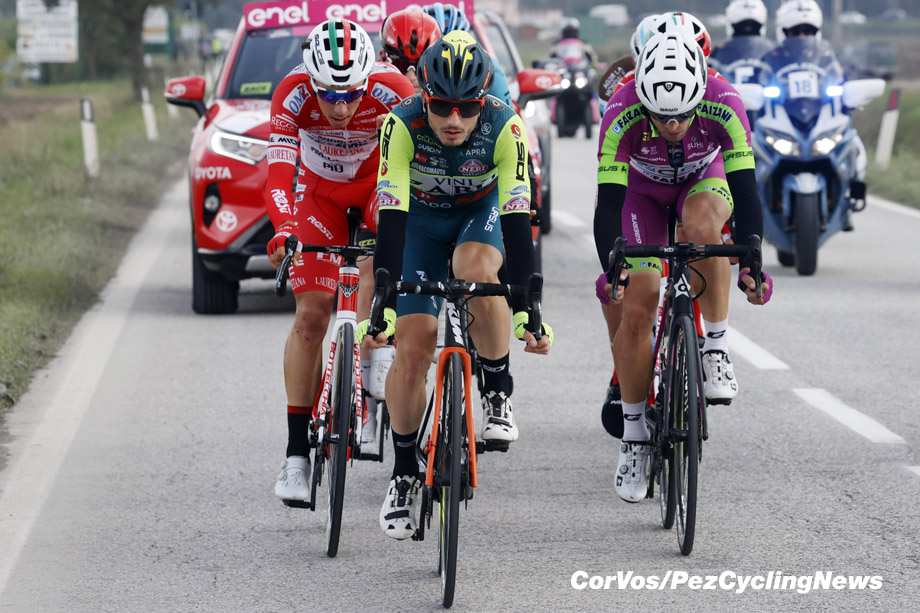 A stage would be decided in a sprint between this elite group riders. Ulissi started the sprint from afar with Almeida in his wheel. The Portuguese kicked next, but it was Ulissi who crossed the finish line first, less than a half wheel ahead of the pink jersey. 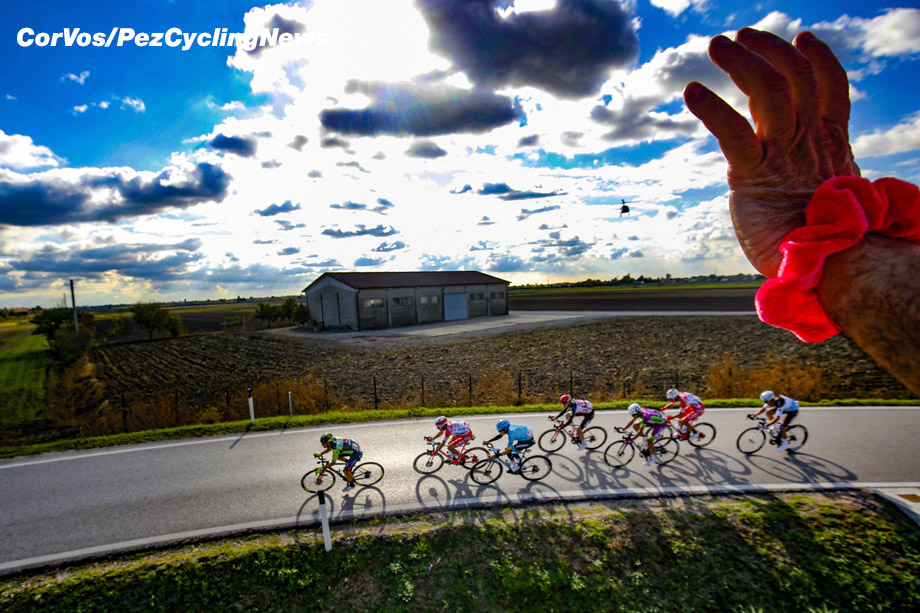 The action was hot even if the weather wasn’t 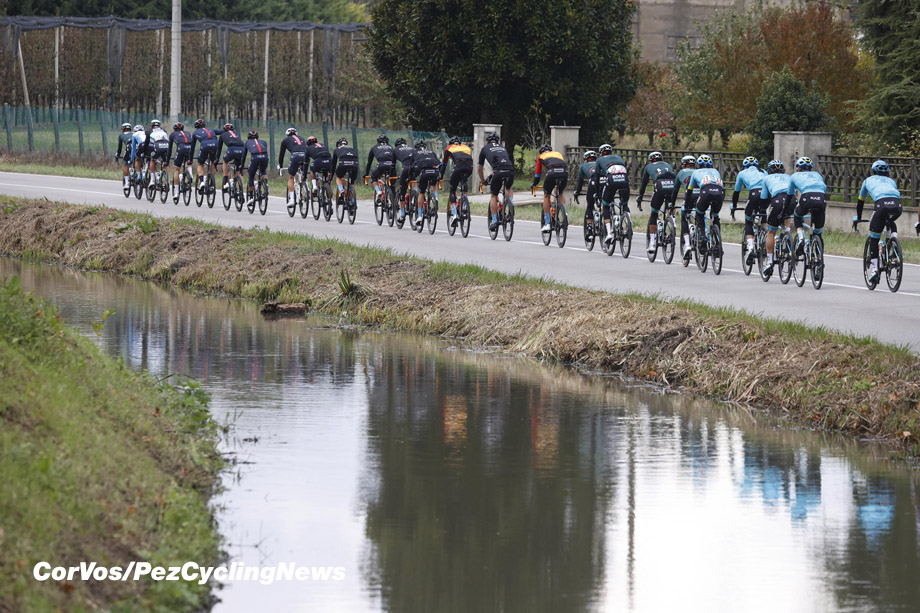 The overall wasn’t under threat, but the points jersey was

The Italian thus booked his second stage victory in this Giro, his eighth ever. Almeida is left with six bonus seconds from his second place, which means that he will start the individual time trial tomorrow with a 40 seconds advantage over Wilco Kelderman. 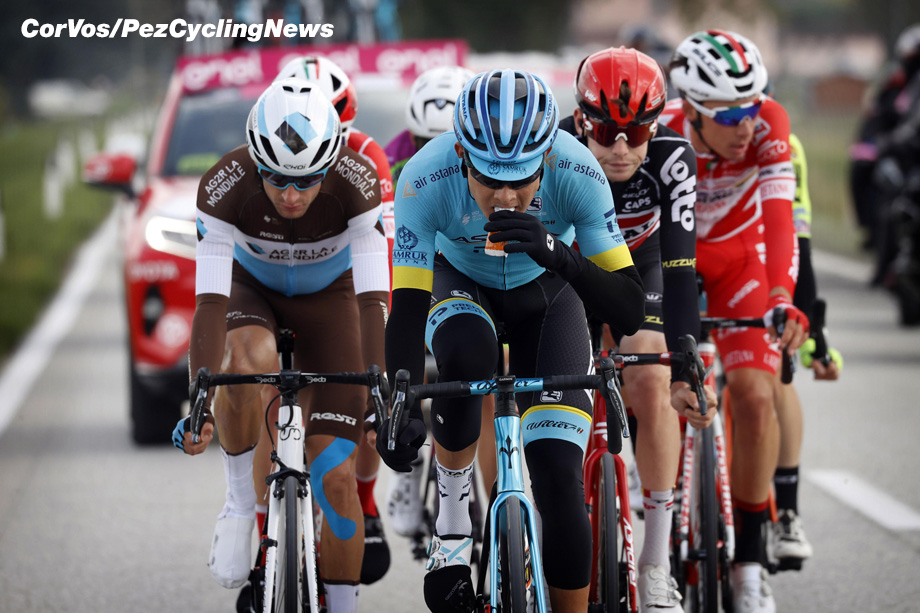 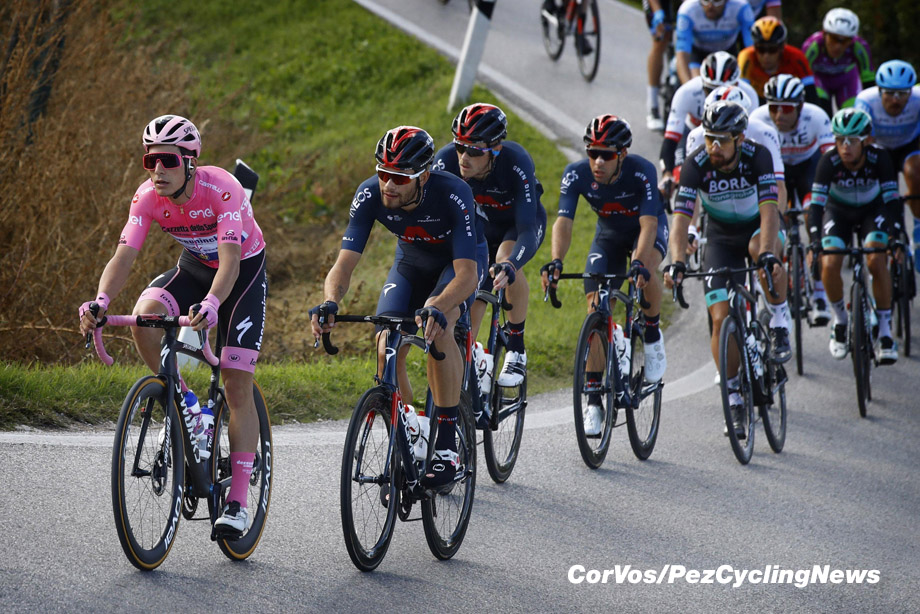 Stage winner, Diego Ulissi (UAE Team Emirates): “We did a great job on the last climb to drop the sprinters and arrive with a small group. McNulty was very good in the final, how nice to get another success in the Giro!” 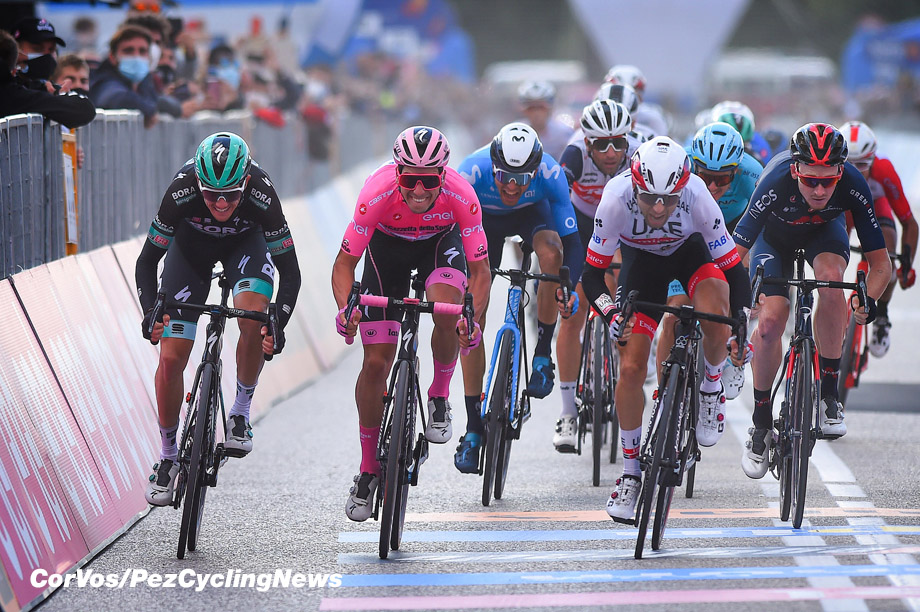 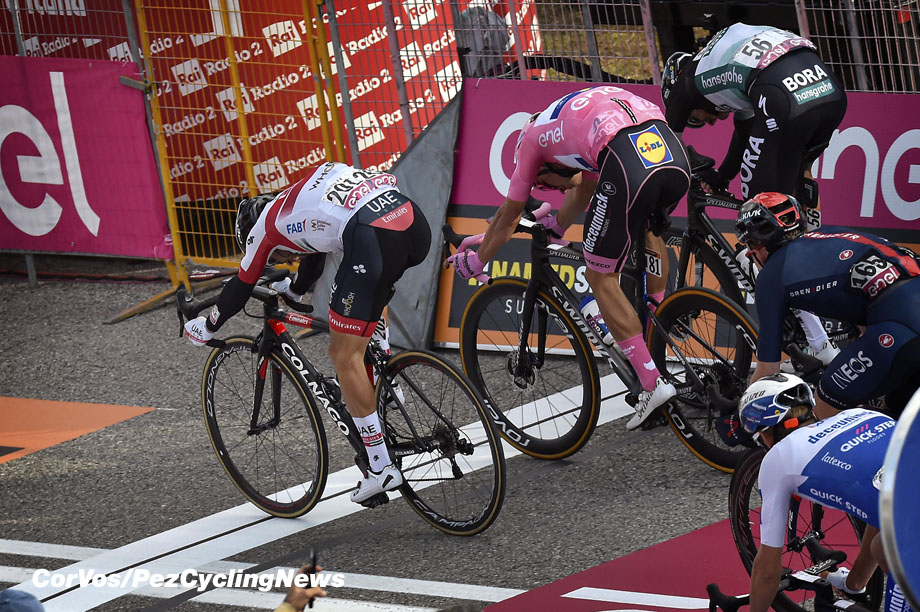 It was a close call at the line 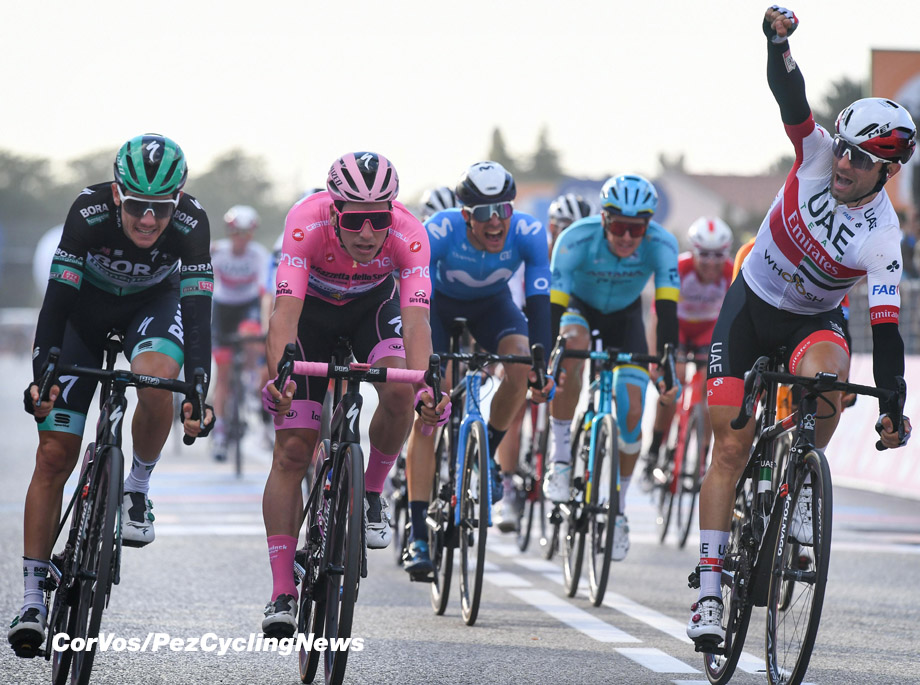 Maglia Rosa, João Almeida (Deceuninck – Quick-Step): “I am a bit disappointed with my second place, I wanted a stage win. I was really close but not close enough. Tomorrow will be a hard ITT but I will give it my best.”

# Keep it PEZ for a big weekend of Giro d’Italia and De Ronde van Vlaanderen. #

FLANDERS’20 The PEZ Preview – Who’s Hot For the Hellingen?