Upset in the Giro d'Italia

Stage 15 Race Report: Teo Geoghegan Hart (INEOS Grenadiers) put the fifteenth stage of the 2020 Giro d’Italia on his palmarès. On the mountain stage to the ski resort of Piancavallo he beat the Sunweb tandem of Jai Hindley and Wilco Kelderman, who, including bonuses, took 43 seconds back on the pink jersey, João Almeida (Deceuninck – Quick-Step). 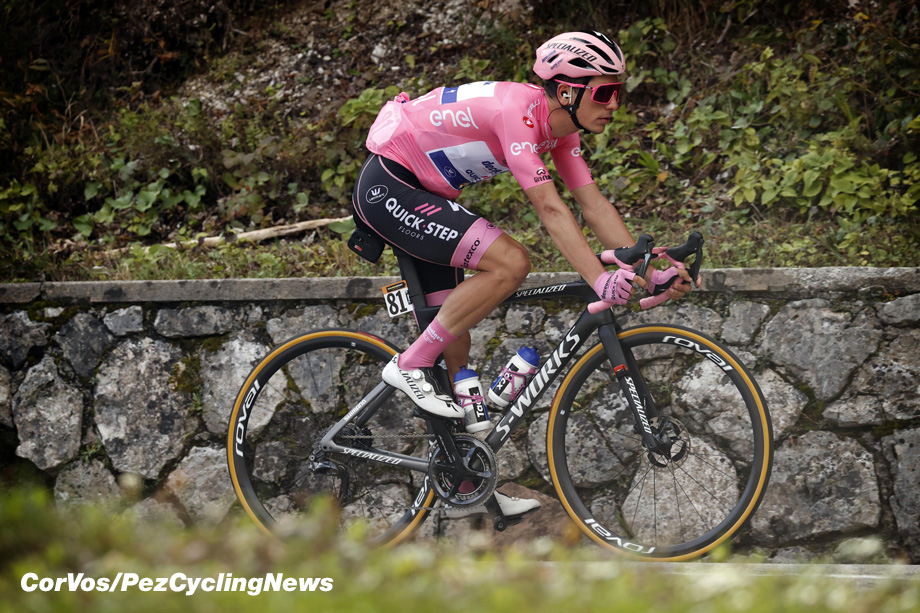 Juan Sebastian Molano was not at the start. In the time trial to Valdobbiadene, the Colombian crashed and his injuries turned out to be too serious to continue. Only 141 riders started the fifteenth stage. In the first 7 kilometres a leading group of twelve men escaped, but they only managed to take a small lead. 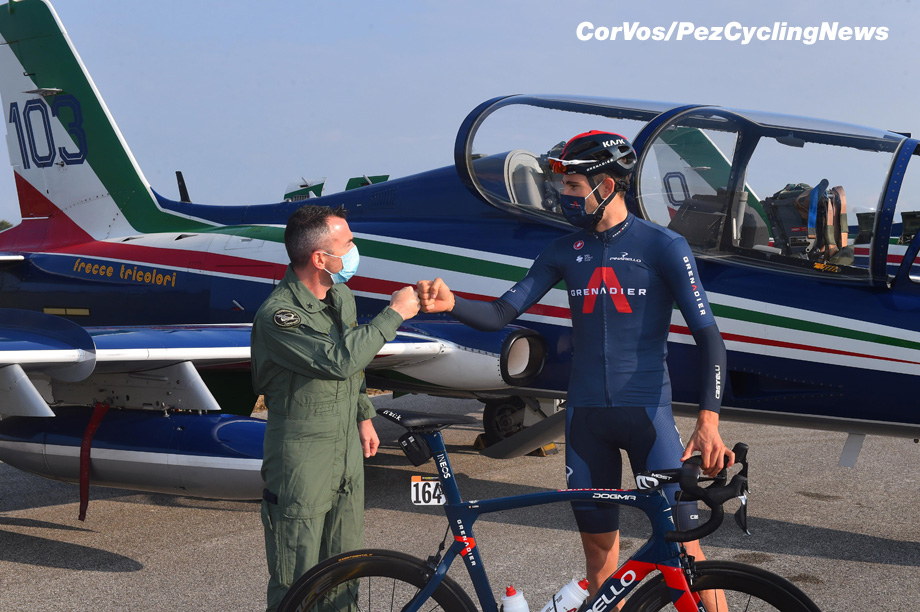 Stage 15 – Base Aerea Rivolto (Frecce Tricolori) – Piancavallo – 185km
This is a mountain stage with long downhill or flat drags in between the climbs. After the Sella Chianzutan categorised climb (on relatively wide and well-paved roads), a long descent leads all the way to Tolmezzo. The route then clears the 2nd category Forcella di Monte Rest on narrowed roadway (with several hairpins along the climb and the descent, at times inside a tunnel). The following descent then leads to the Pala Barzana KOM summit, with some intricate sectors while travelling uphill across the urban areas. The route then takes a technical descent, followed by a perfectly-surfaced and well-lit tunnel of over 4km, and eventually levels out until Aviano, where the final climb begins. 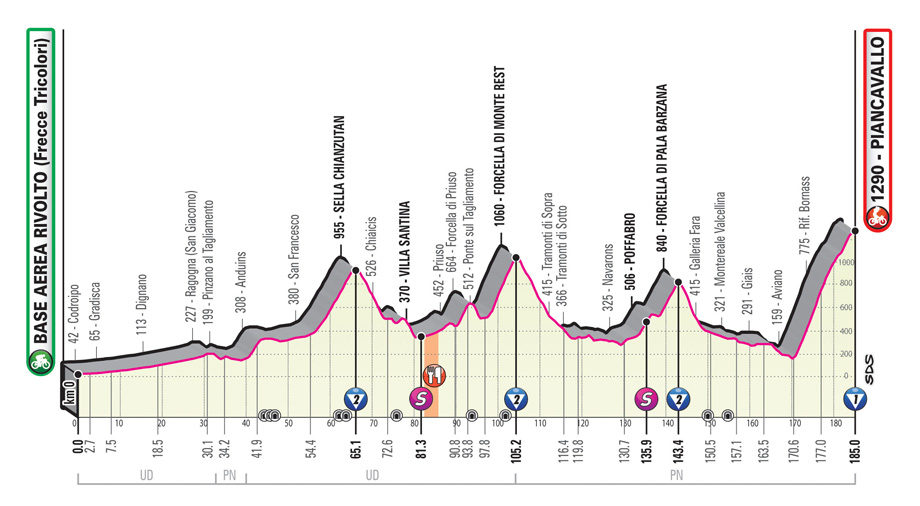 Final KMs
The final 15km run entirely uphill. The first 10km of these go up at very steep gradients – around 9% and topping out at 14%. With 10.9km remaining, the road levels out and even descends a little, then climbs up again (passing through an avalanche gallery) with milder gradients (maximum 8%). The final kilometre is quite tough, still climbing slightly. The home stretch (100m long) sits on a wide, mild bend, on 7.5m wide asphalt road, and has a 1.5% uphill gradient. 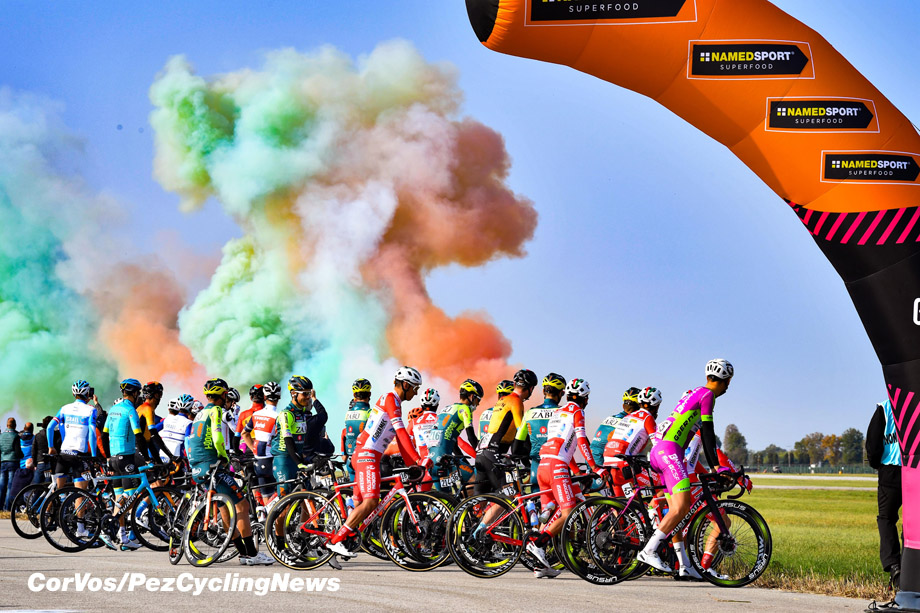 Will we see fireworks today? 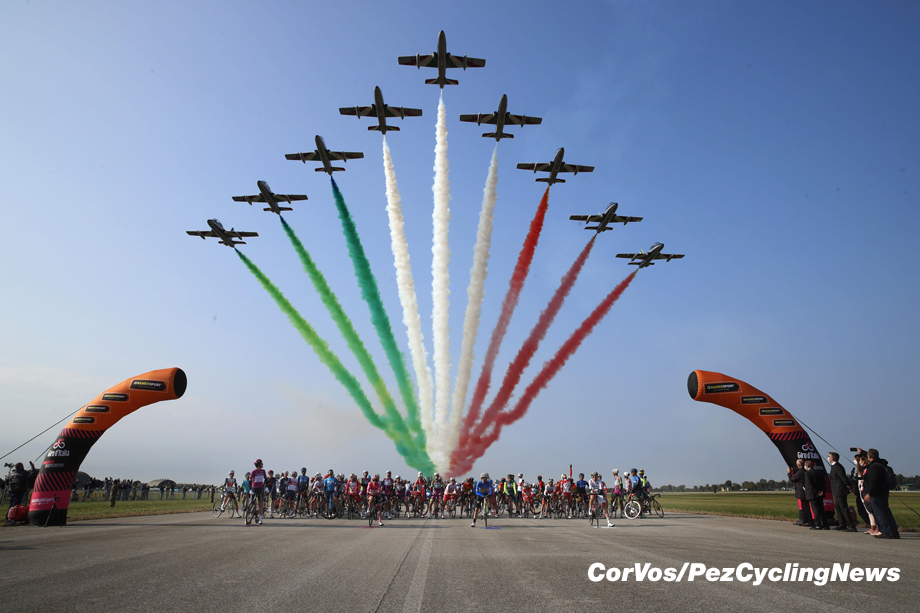 The Italian airforce showing their colours

On the Sella Chianzutan, the first climb after 65.1 kilometres, the Italian was the first to cross the summit and took the lead in the KOM. The early break now had a lead of 6:30. Behind; Sunweb for Wilco Kelderman, second on GC, and NTT Pro Cycling for Domenico Pozzovivo took control. They slowly reduced the difference in the run-up to the second climb. 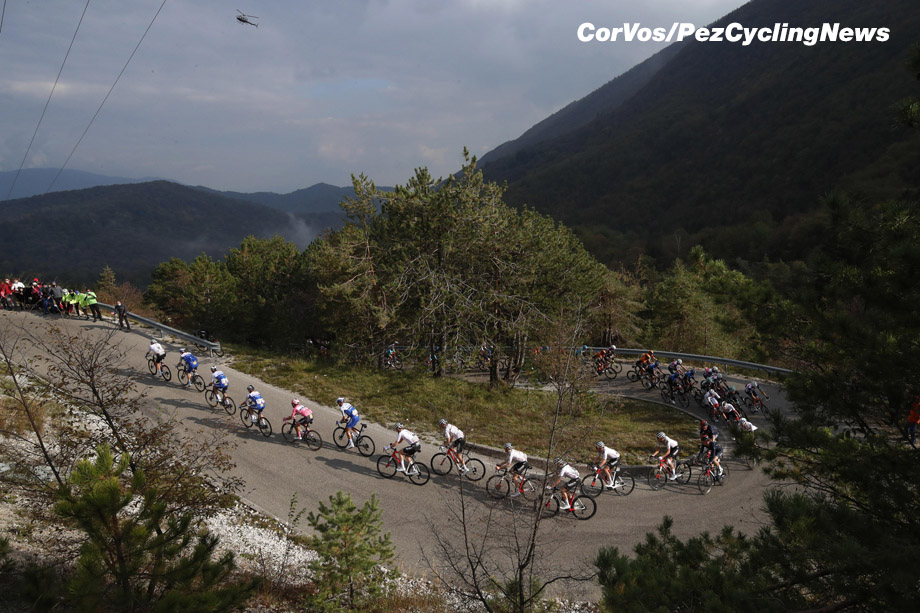 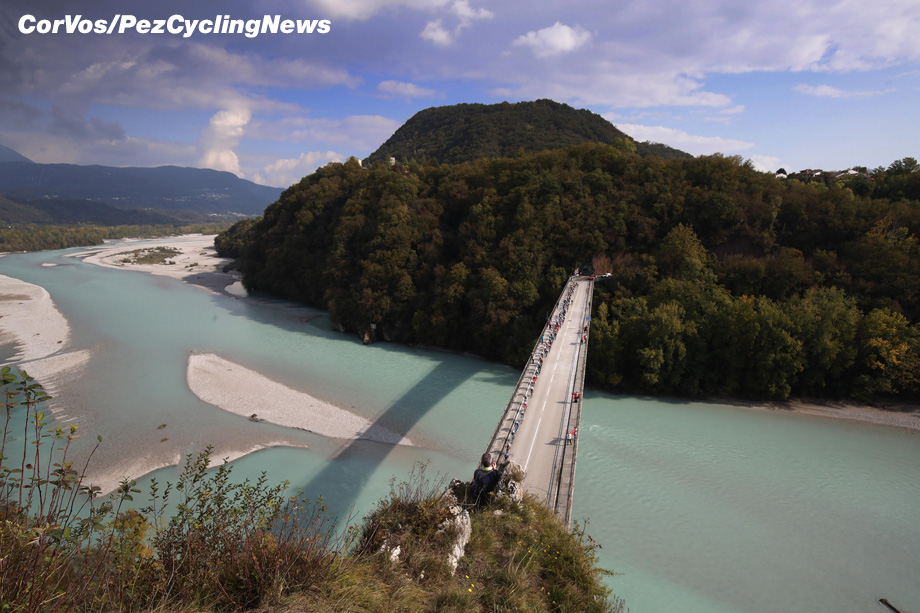 Stage 15 was a bridge too far for some

On the Forcella di Monte Rest, after 105.2 kilometres, Visconti once again took full advantage and strengthened his KOM lead. The peloton followed at about 4:30. In the run-up to the third climb, there was a crash involving Jhonatan Narváez, winner in Cesenatico, Jefferson Cepeda and Nicolas Edet. Cepeda was able to continue, Narváez and Edet had to retire. 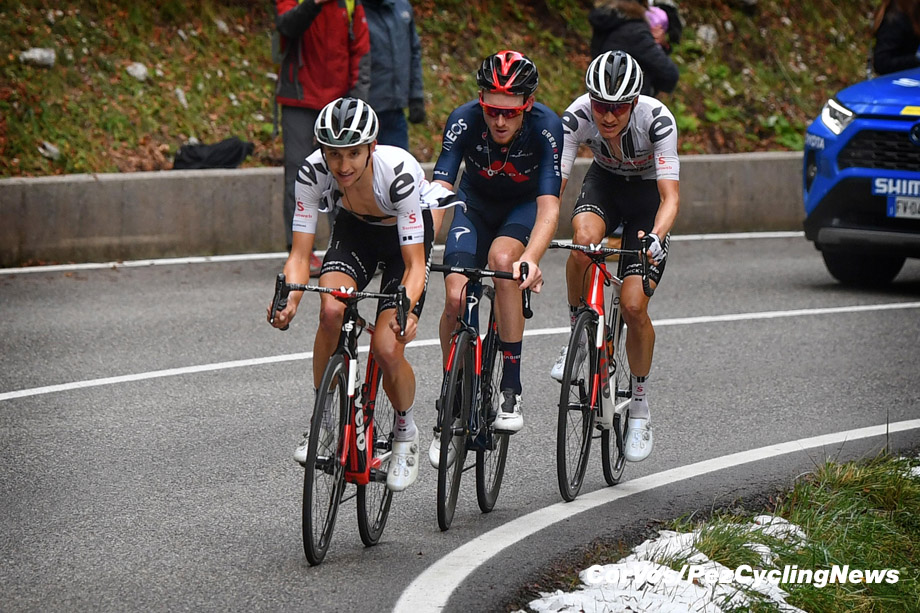 While the road started to climb on the third mountain of the day, the Forcella di Pala Barzana, De Gendt thinned out the leading group and only Villella, Dennis and Visconti could follow, but Dennis continued solo. The Australian quickly broke away from his fellow escapees and reached the top with a 35 seconds advantage over De Gendt. The peloton was now more than 3 minutes behind. 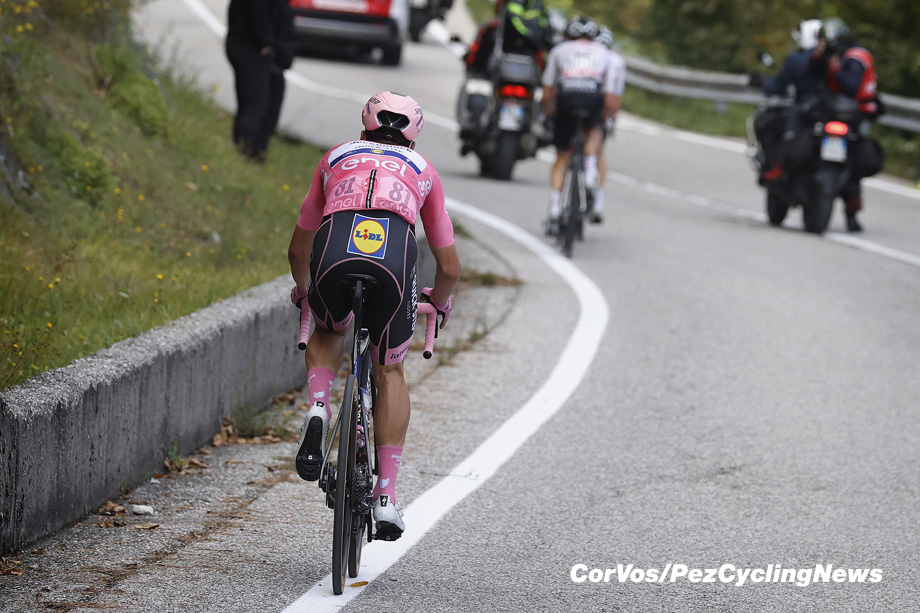 The pink jersey was in trouble

41.6 kilometres remained, of which the last 14.5 kilometres were all uphill to the finish. With a two-minute lead, Dennis then started the climb to the ski resort of Piancavallo. Astana and Sunweb led the pack up the first 6 kilometres, where the road averaged 9.4%. One by one, the dropped early escapees were caught by the riders of Jakob Fuglsang and Kelderman. 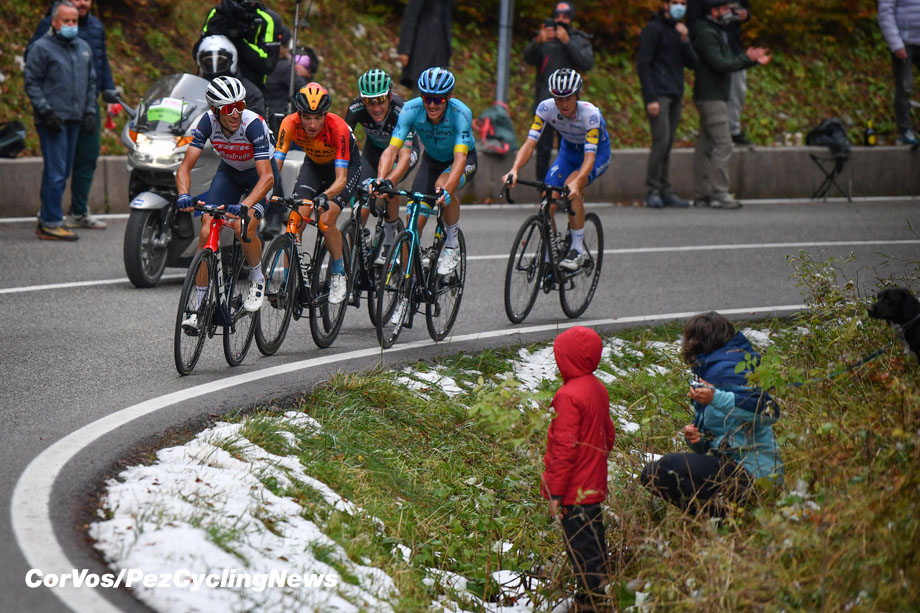 Almeida wasn’t the only one

Due to the fast pace of Sunweb, Dennis was the last to be caught 9 kilometres from the finish. The Kelderman train, which was driven by Jai Hindley and Chris Hamilton for a long time, also resulted in victims among the favourites for the overall in the first part of the climb. Pello Bilbao (third), Brandon McNulty (fourth), Pozzovivo (seventh), Patrick Konrad (ninth) and Fuglsang were in trouble. 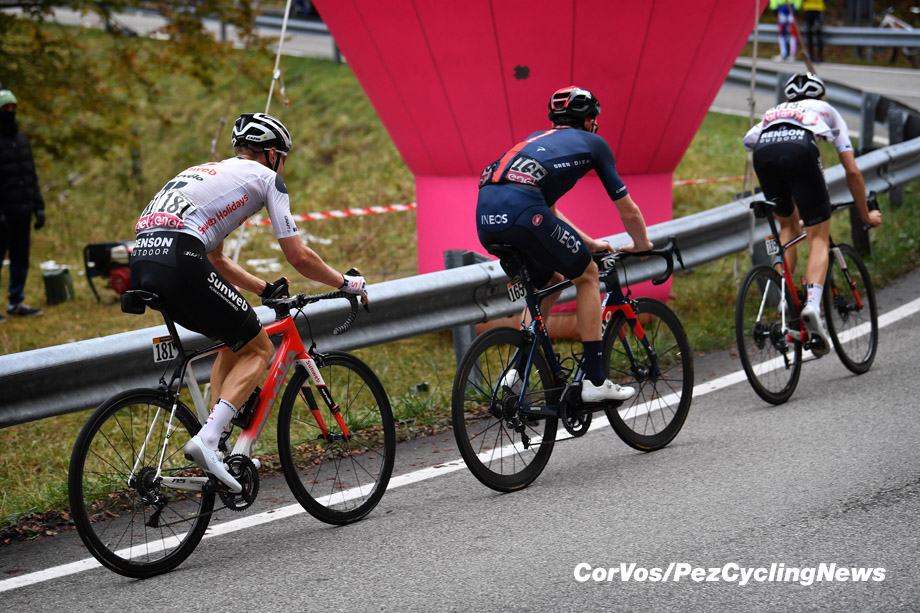 Vincenzo Nibali also had to let go on the steepest part and at 7 kilometres from the line, overall leader João Almeida also was dropped, while the very strong Hindley, Kelderman and Tao Geoghegan Hart took the lead together. The Portuguese pink jersey wearer refused to accept the situation and bit his teeth to keep the leading trio in his sights. He initially succeeded, but then he had to give up more and more time. 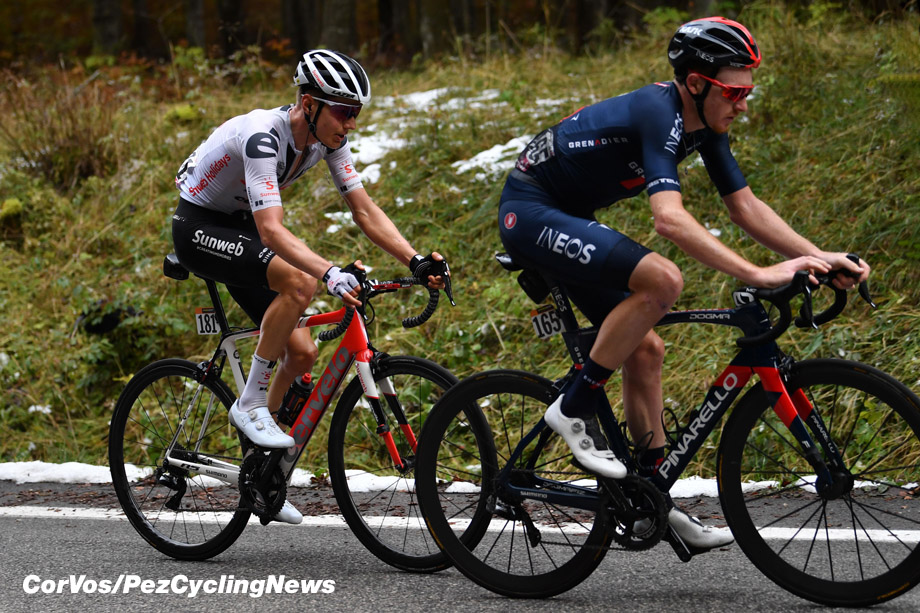 Sunweb had a plan

In addition to the stage victory, the bonus seconds were also at stake at the finish for the first three riders. Kelderman had to let the full ten seconds go to Geoghegan Hart, who still had a sharp sprint in the legs in the last hundred metres. The Briton gave his INEOS Grenadiers team their fifth success in this Giro. The Sunweb leader finished second and earned 6 bonus seconds. 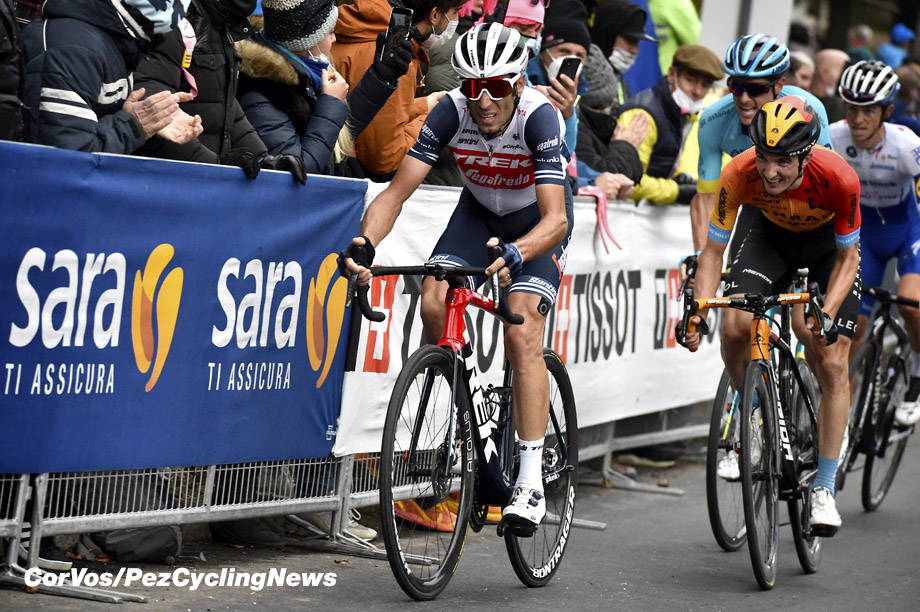 Some of the day’s losers

We had to wait for Almeida. The wearer of the pink kept the damage limited to 37 seconds and kept his jersey. Kelderman is now at 15 seconds on GC. The Dutchman dealt a heavy blow to all his competitors. Hindley and Geoghegan Hart climbed to third and fourth place respectively thanks to their performance on the stage. 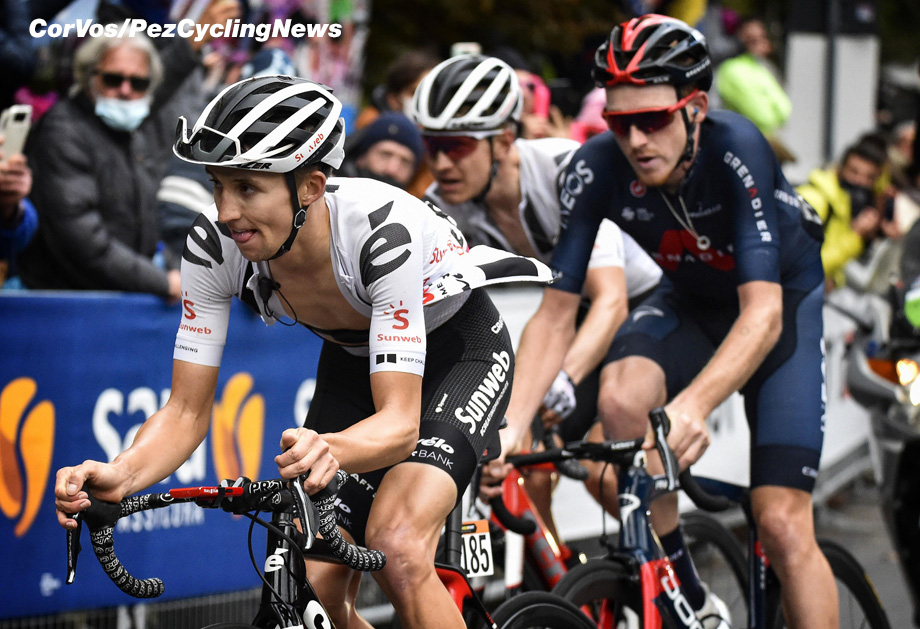 Another stage win on the way for INEOS Grenadiers

Further back the damage was worse. Bilbao, Nibali and Fuglsang, lost a minute and a half and are now fifth, seventh and twelfth. For McNulty, the loss was more than two and a half minutes, dropping him out of the top ten. Majka, Pozzovivo, Konrad and Masnada also lost time. 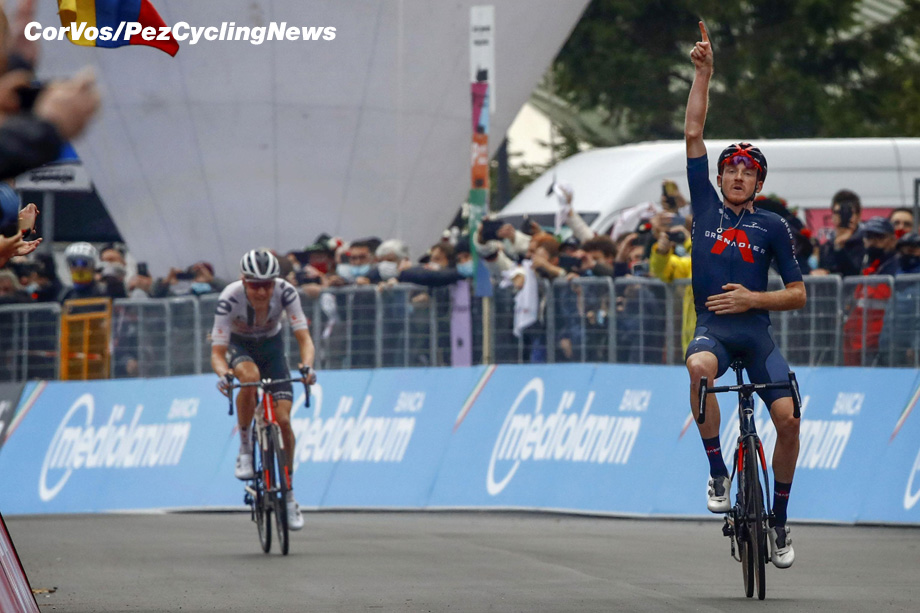 Stage winner, Tao Geoghegan Hart (INEOS): “I can’t believe it, we have had a really tough Giro to date after losing Geraint Thomas, but this team is extraordinary and we are all showing what we’re capable of stage by stage. Everyone knows what a great influence Nico Portal had on the team and for me in particular: everyday we ride, we are remembering him.” 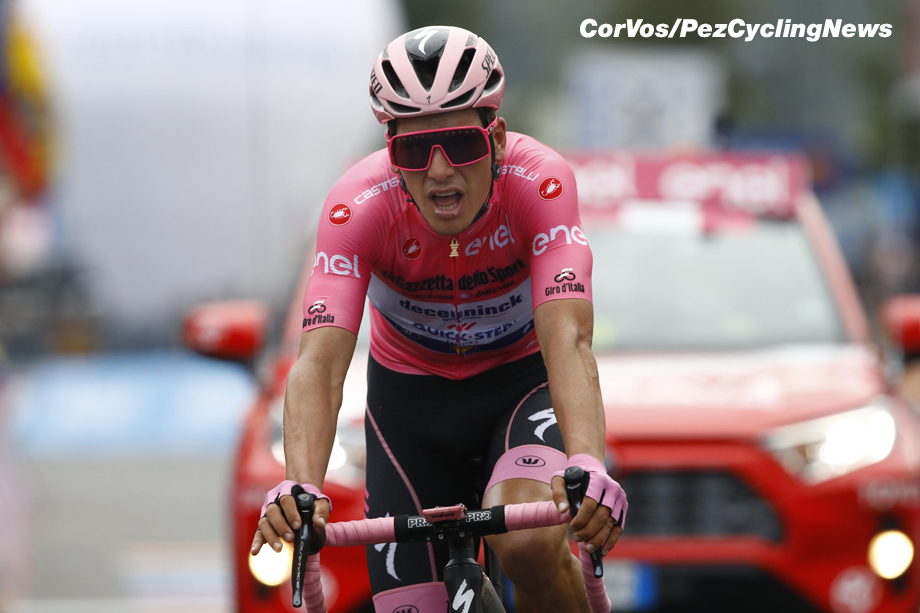 Maglia Rosa, João Almeida (Deceuninck – Quick-Step): “It was a very hard stage, the three riders on the front on the final climb were too fast for me. I know my body and my limits, so I had to drop back. I’m happy to have managed to save the Maglia Rosa, once again thanks to my team.”