Giro Stage Report: Ben O’Connor (NTT) turned the tables in the Giro d’Italia. Second on Tuesday’s stage and first on Wednesday. On stage 16 O’Connor was beaten by Bahrain-McLaren’s Jan Tratnik, but on stage 17 he had his revenge by beating Hermann Pernsteiner into second place. The peloton came in over 5 minutes down for Joāo Almeida (Deceuninck – Quick-Step) to hold the pink jersey for the fifteenth day. Tomorrow the Stelvio. 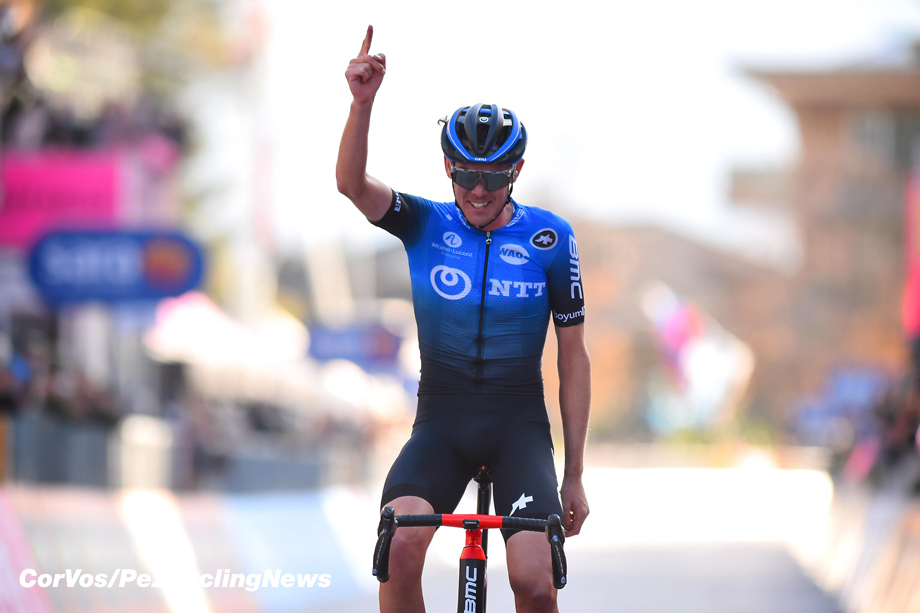 NTT still looking for a sponsor for 2021

A day after his second place in San Daniele del Friuli, Ben O’Connor put the seventeenth stage to his name. The Australian was part of the break and then rode away from his companions on the final climb. 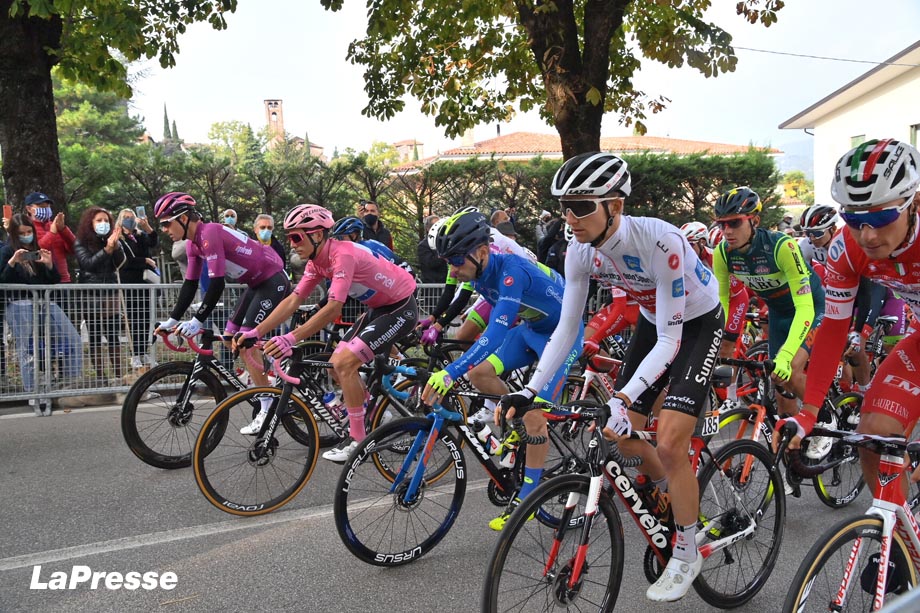 Stage 17 – Bassano del Grappa – Madonna di Campiglio – 203km
A tough summit finish awaits the peloton after a full mountain stage. The route briefly travels up the Valdastico and climbs up the right side of the valley, through Tonezza del Cimone, up to Forcella Valbona. The climb is very long, with steady gradients and several short tunnels along the way, with excellent visibility. After a long descent leading all the way to Calliano, the route takes in the Monte Bondone climb coming from Aldeno (20km with average 6.8% and maximum 15% gradients). The stage then descends into Sarche, clears the Passo Durone, and reaches Terme di Comano and Tione di Trento. The road goes up again, starting with a false flat until Pinzolo, and then climbing with 6% average gradients until the final 3km before Madonna di Campiglio. 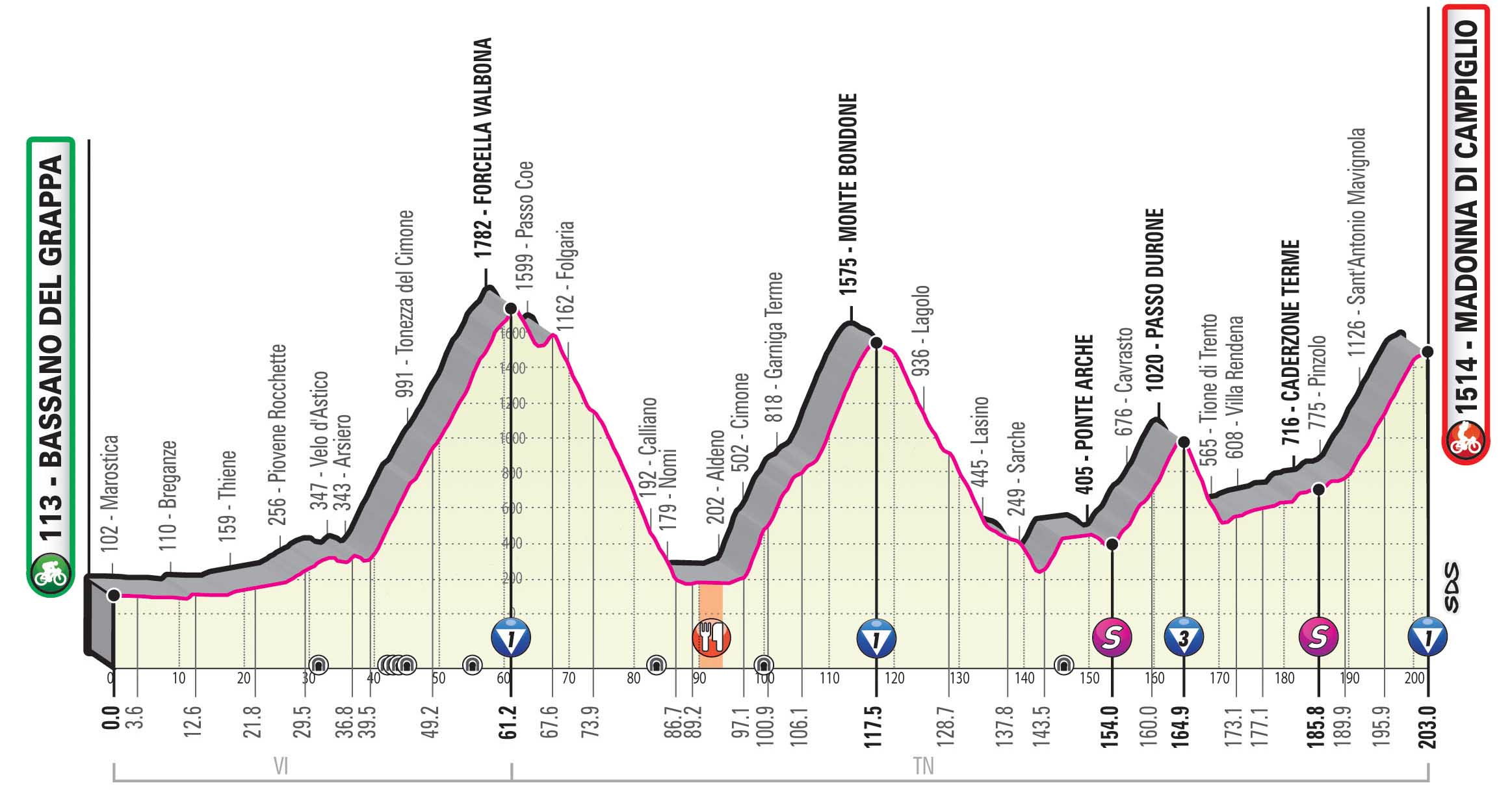 Final KMs
In Carisolo, the road begins to climb steadily at around 6.5% for 12.5km. The route flattens out over the last 2km, after entering the urban area through a short artificial tunnel. The finish line lies on a 650m long, 6.5m wide, well-paved tarmac home stretch. 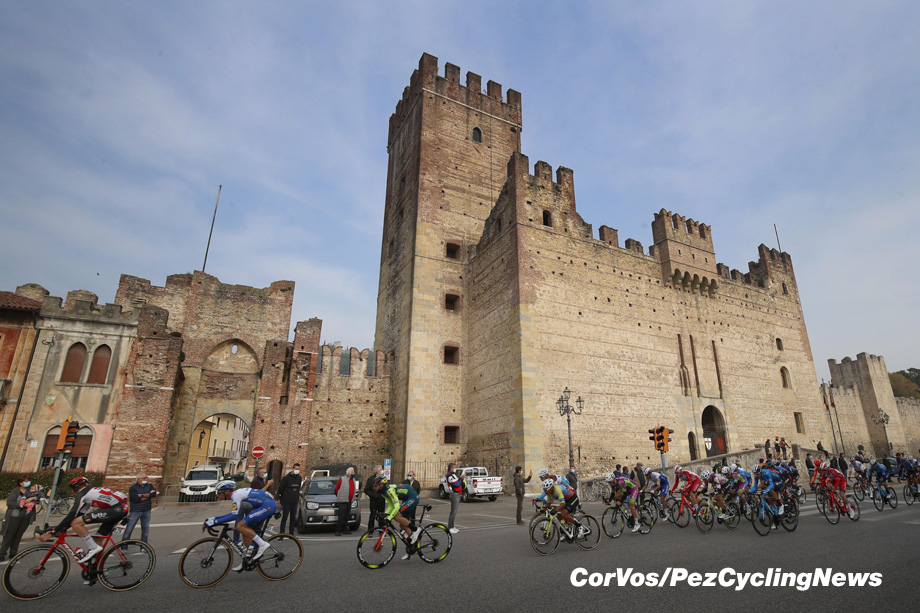 Bassano del Grappa was the start for this tough stage with more than 5,000 vertical meters. The pace was fast from the start and numerous groups tried to ride away. Eventually a large leading group with nineteen men, emerged on the first climb. Hermann Pernsteiner was the best-classified rider, just under 10 minutes from pink jersey. 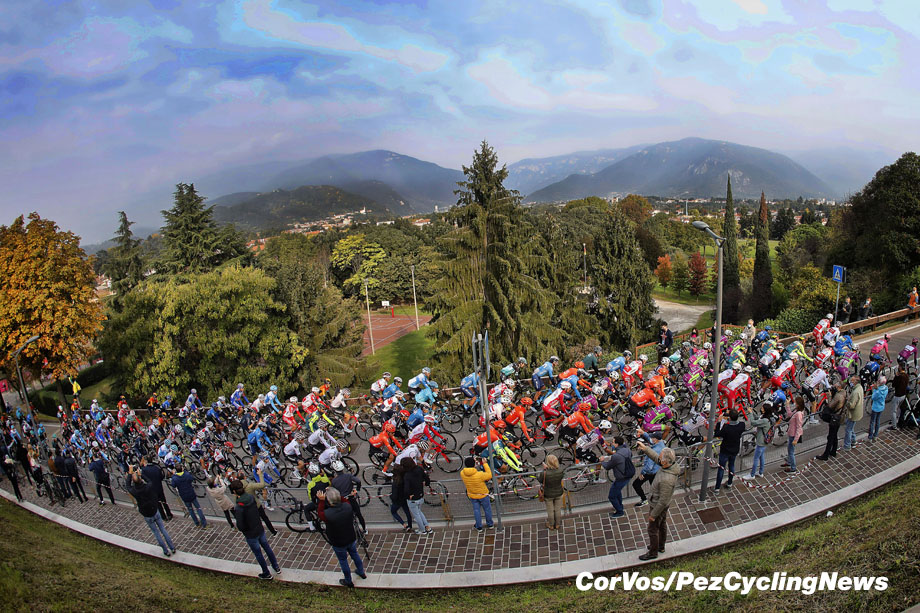 The mountains are in the distance 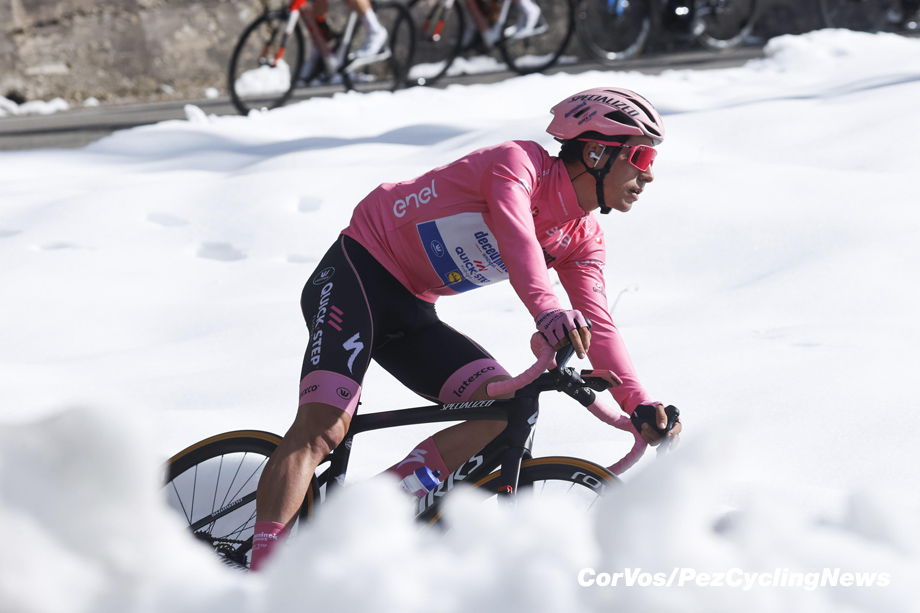 Ruben Guerreiro was there, but his closest attacker in the battle for the mountains classification, Giovanni Visconti, was missing, so the way was clear for the EF Pro Cycling rider to take the blue for the second time. At the top of the Forcella Valbona, after 61.2 kilometres, he took the lead in the classification as he was first and earned 40 points.

At the top of the first climb, the leading group had a lead of almost 5:30. Behind, Almeida’s teammates set the pace, with Sunweb behind them. The race left the Veneto region behind and entered Trentino-South Tyrol. Then the Monte Bondone started. On this climb, the nineteen off the front were 7 minutes ahead, putting Pernsteiner in to the virtual top ten. This did not cause other teams to chase. Just below the top, after 117.5 kilometres, Guerreiro started again and raked in the maximum number of points, like on the first climb. 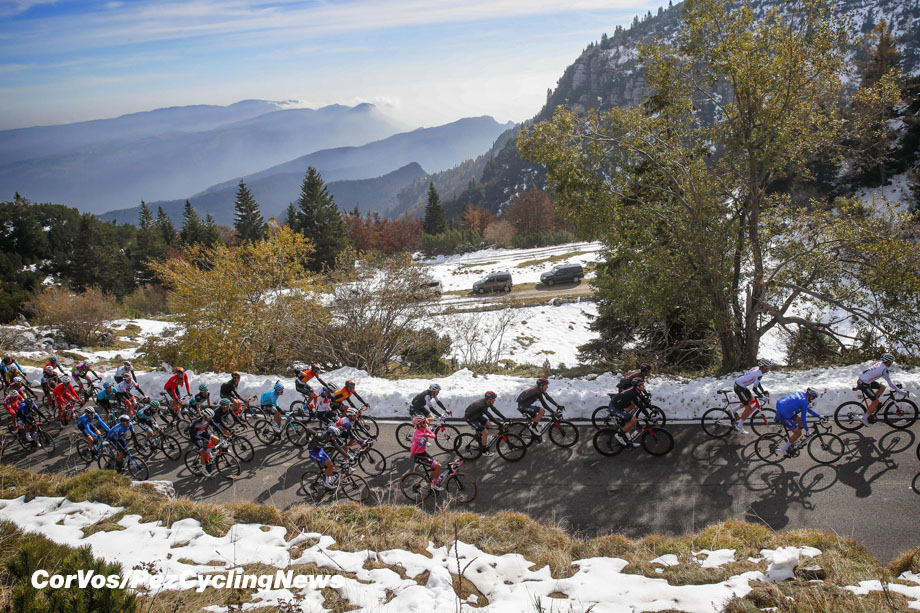 The race hit the snow line

On the descent to Sarche, Dario Cataldo rode away from his fellow escapees and hit the valley with a lead of 40 seconds. The experienced Movistar rider was successful in the Giro last year, when he took the stage to Como where he won the final sprint against his fellow countryman Mattia Cattaneo, with whom he had been on the attack all day.

Cataldo stayed ahead until the intermediate sprint in Ponte Arche, after 154 kilometres. There he was caught by Zakarin, Vanhoucke, Carretero, Gebreigzabhier, O’Connor and Dennis. Moments later, De Gendt and Pernsteiner also rejoined. On the Passo Durone, the third climb of the day, the lead of the escapees increased to 8 minutes. The peloton were maybe thinking of Thursday’s climb of the Stelvio. 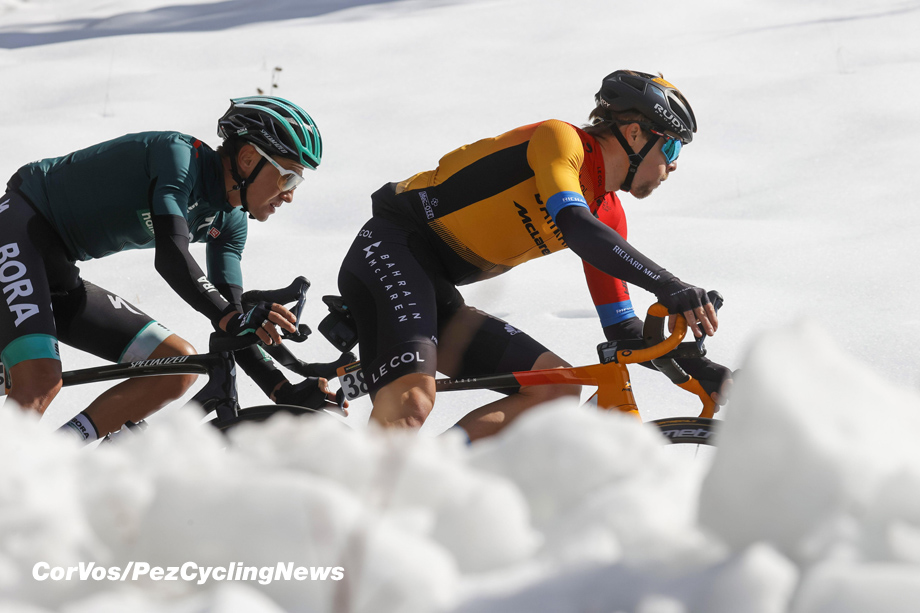 Villella also managed to get to the front before the top of the climb. De Gendt was the first to top after 164.9 kilometres. Bouchard, Rodríguez, De la Parte, Hansen and Frankiny were also able to return. Only Guerreiro, who had done good business for the mountain jersey, Sepúlveda, Meintjes and Ulissi were back in the peloton. The break started the final climb with a lead of 6 minutes. 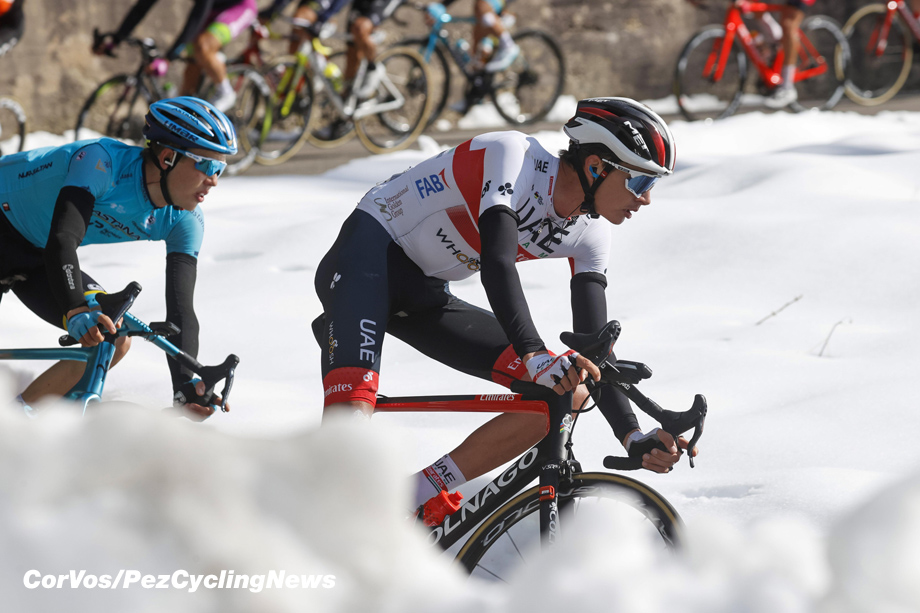 In the first part Carretero and Cataldo quickly got rid of the leading group, it also went too fast for Bouchard, De la Parte and Hansen. Movistar was in front with four riders, but at the start of the last 9 kilometres, Villella was the last rider of the Spanish team. De Gendt and Zakarin delivered the first attacks in the leading group, but an attack by O’Connor with 8 kilometres to go was more successful. 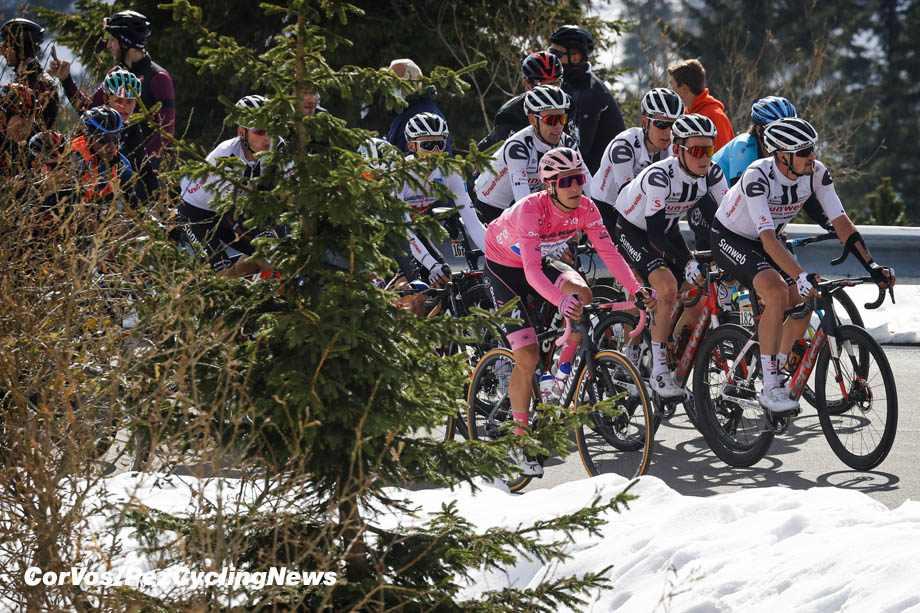 The peloton were maybe holding back for tomorrow’s Stelvio

In the peloton, which also reached the final climb, Sunweb had taken over the initiative from Deceuninck – Quick-Step. Under the impulse of first Martijn Tusveld and later Sam Oomen, the large peloton thinned out further and further, while Wilco Kelderman and Jai Hindley watched the work of their colleagues. Then Hindley took the lead, only to test the competition with an attack a little later. Kelderman tried to jump to his teammate, but the pair was not given space. 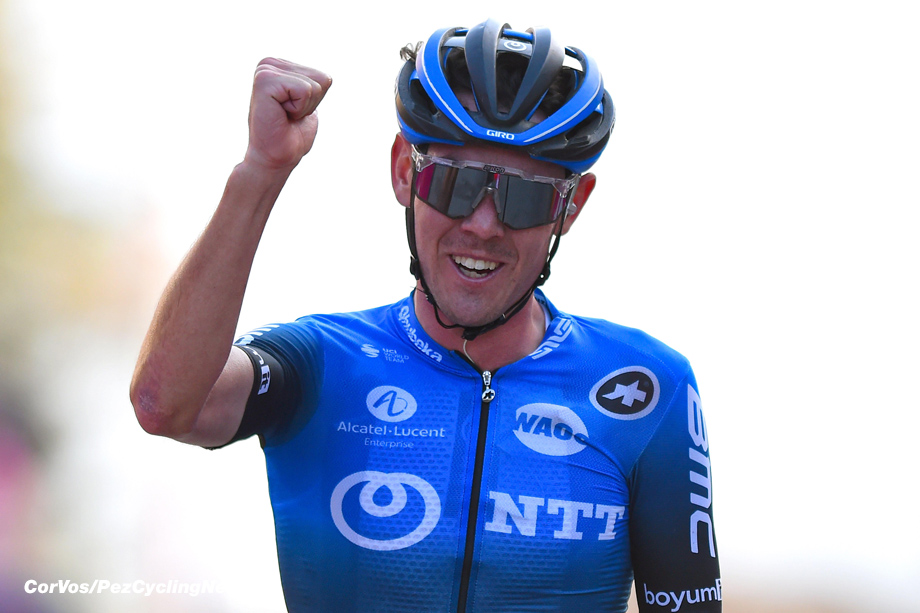 Big win for O’Connor and NTT

At the front, O’Connor managed to enlarge his lead, despite a counterattack from Pernsteiner. The Australian rode more than half a minute away from the Austrian and secured his best solo victory at the line in Madonna di Campiglio. Second place for Pernsteiner, De Gendt third ahead of Zakarin. More than 5 minutes later, the top ten of the GC crossed the line. 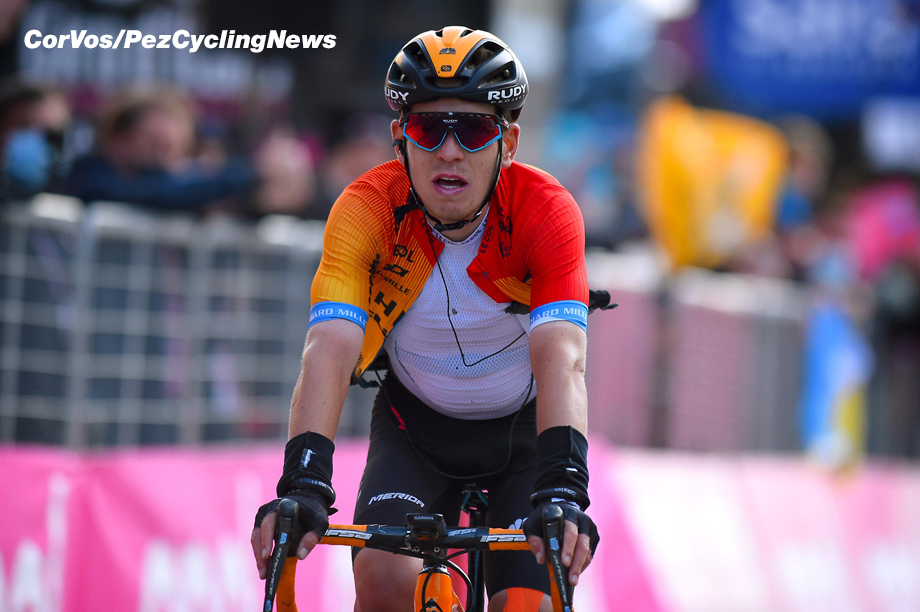 Stage winner, Ben O’Connor (NTT): “Yesterday’s second place left me feeling pretty bitter. Today I was able to bounce back and get this success, it’s a dream to get a victory in a Grand Tour.” 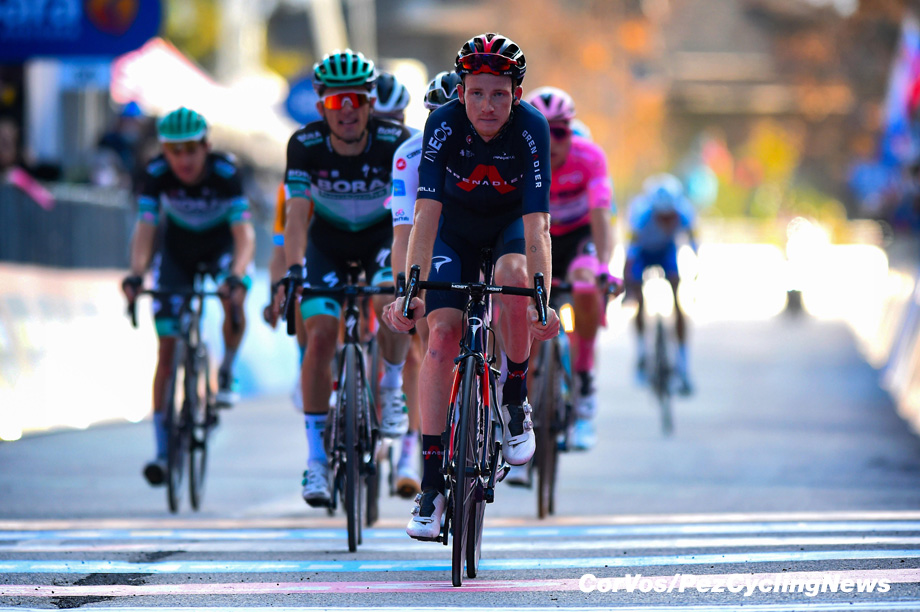 Maglia Rosa, João Almeida (Deceuninck – Quick-Step): “Today it was a hard day, a lot of climbing but I had the perfect team with me. That’s one more day in the Maglia Rosa. Team Sunweb tried to attack but I was feeling good. Tomorrow it’s another day, I look forward to it.”

# Still a lot of climbing before Milan – Keep it PEZ all the way. #