Giro Stage Report: Stage 19 was first lengthened and then shortened due to a rider strike. But Josef Cerny was a deserving winner, taking a Grand Tour stage for the soon to disappear CCC team. Victor Campenaerts (NTT) was second and Jacopo Mosca (Trek-Segafredo) third. Wilco Kelderman (Sunweb) finished in the peloton to hold the overall lead. 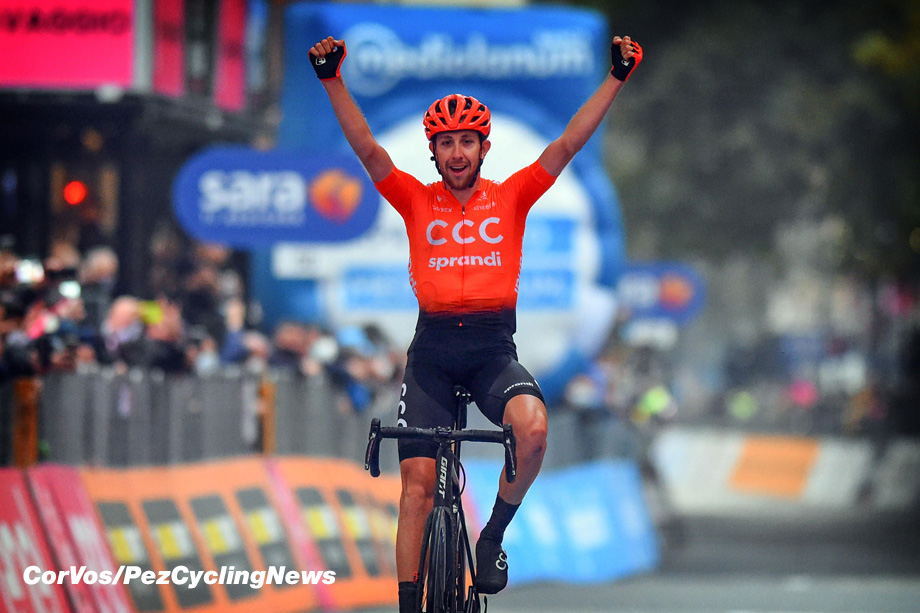 Josef Cerny has won a much-discussed stage in the Giro d’Italia 2020. After a shortened race of 124 kilometres, CCC’s Czech rider was the best of the breakaway in the finish town of Asti. Victor Campenaerts was well behind second and the peloton took a day off. 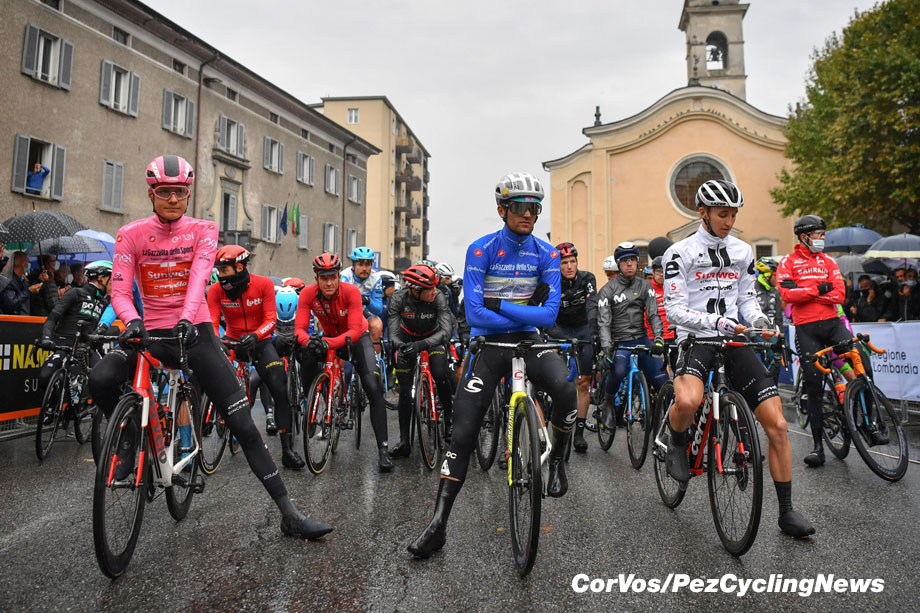 The competition leaders ready for a wet day

Stage 19 – Morbegno-Asti – 258km
Owing to the collapse of the bridge over river Sesia in Candia Lomellina, Stage 19’s route has been changed, causing the stage to be extended to 258km, then everything changed. The stage was neutralised after the roll-out in Morbegno. The race subsequently restarted in Abbiategrasso at 14:31. The Intermediate Sprints at Vigevano and Masio (Abbazia) and the stage finish in Asti (after 124km of racing) remain unchanged.

It should be one for the sprinters

Even before the start of the stage, there was already quite a bit of action off the bike. Led by the cyclist union CPA, the riders had complained to the organisation about the length of the stage. The 258 kilometres that were on the program, in combination with the heavy rain, and after the very tough mountain stages of the last days. Giro boss Mauro Vegni changed tack because a number of riders threatened not to start and decided to shorten the stage. 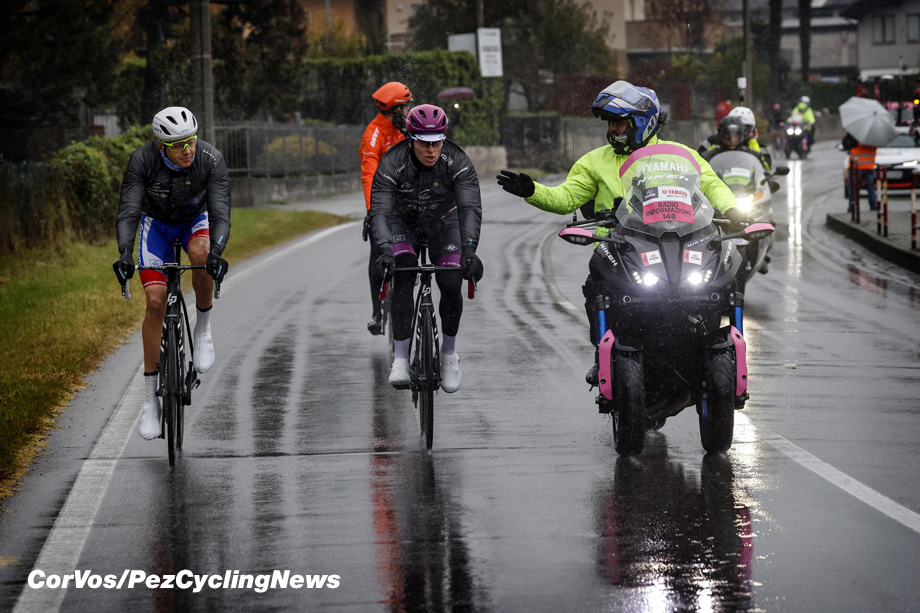 The riders were taken to Abbiategrasso by bus. From there, 124 kilometres had to be raced. It was a very remarkable day for new pink jersey Wilco Kelderman, but you didn’t hear the leader of Sunweb complain. 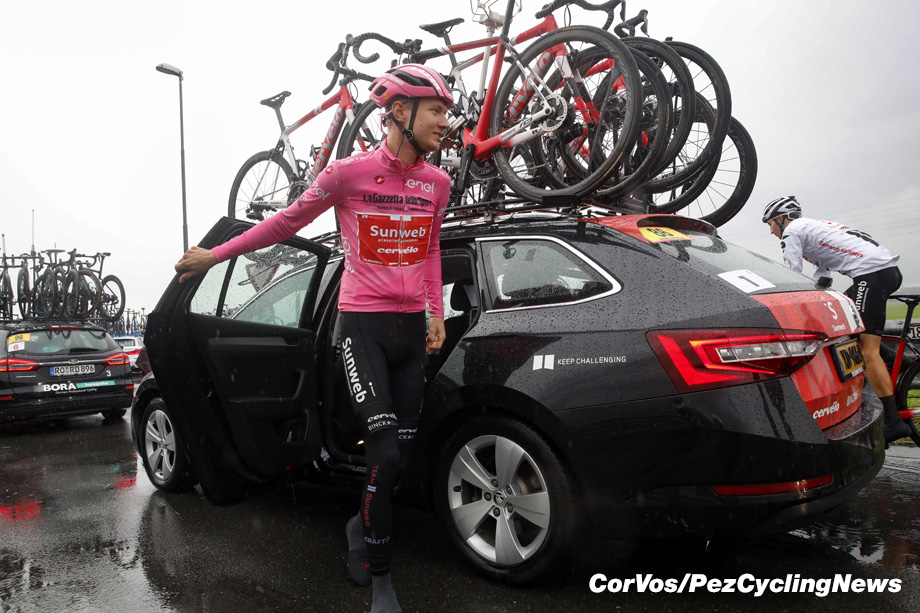 Some of the stage was ridden in the team cars 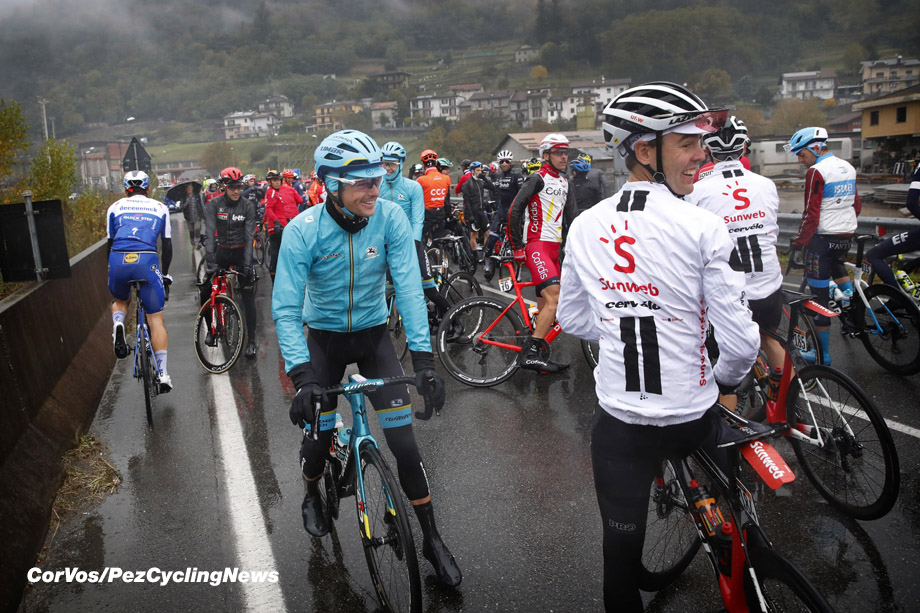 In the peloton, BORA-hansgrohe chased. Peter Sagan’s team gave the fourteen leaders no more than a minute and a half. For a moment BORA-hansgrohe reduced the difference to half a minute, but the peloton did not get any closer. The escapees again pushed the lead to one and a half minutes, which was the sign for BORA-hansgrohe to give up the chase. 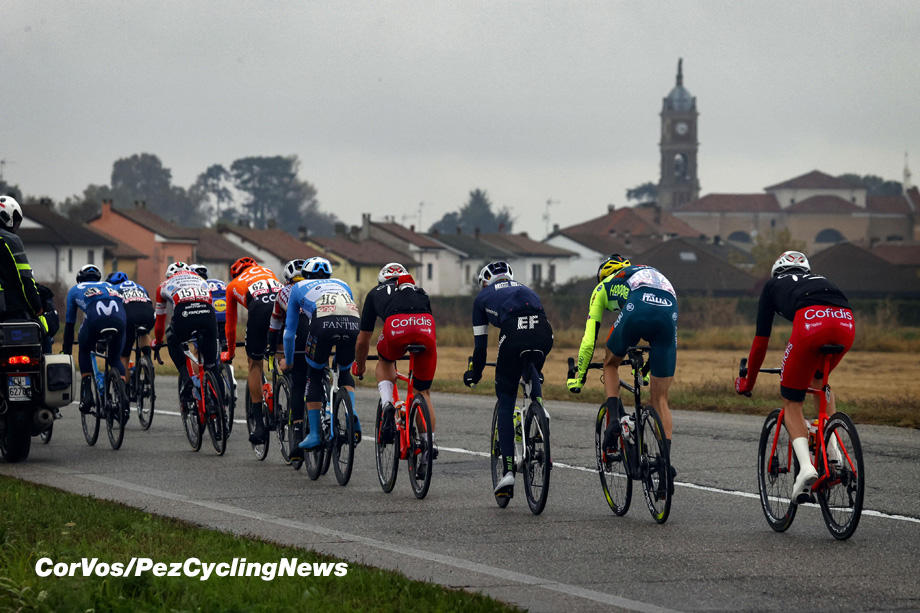 Not a nice day

No other team was interested in the stage victory, and so the fourteen leaders were free to compete for the stage victory. In no time, the lead was increased to 7 minutes, because Sunweb maintained a leisurely pace in the peloton. The front runners continued to work well, up to 30 kilometres from the finish. 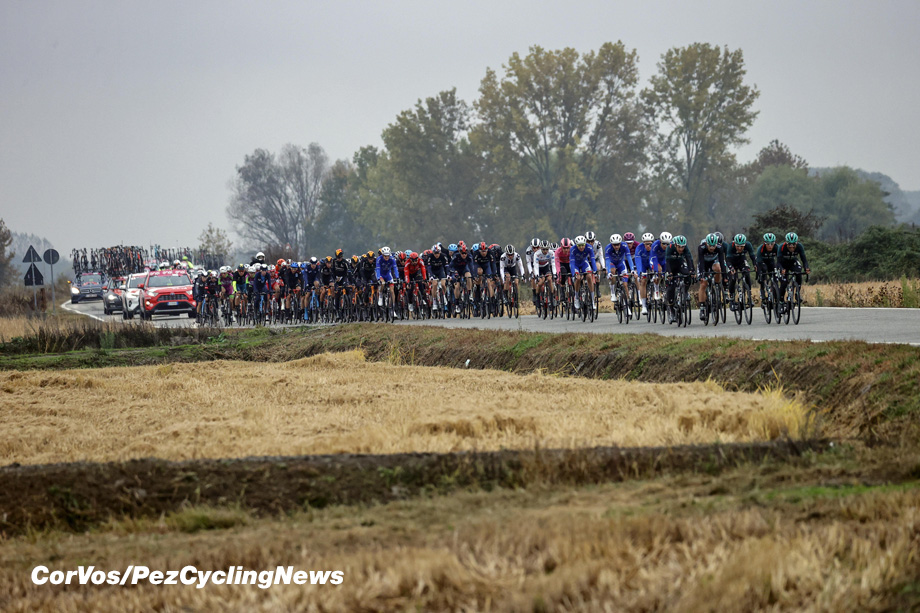 BORA-hansgrohe were the only team interested in the chase

Victor Campenaerts was the first to attack to open the final action. The NTT time trial specialist was the most active, with Pellaud, Clarke, Cerny, Armée and Mosca behind him. On a hilly part before the second intermediate point, Cerny managed to break away. Cerny took 20 seconds on Campenaerts, Clarke, Mosca, Armée and Keisse. The latter managed on his own to make the jump to the Campenaerts group, where Pellaud was dropped. 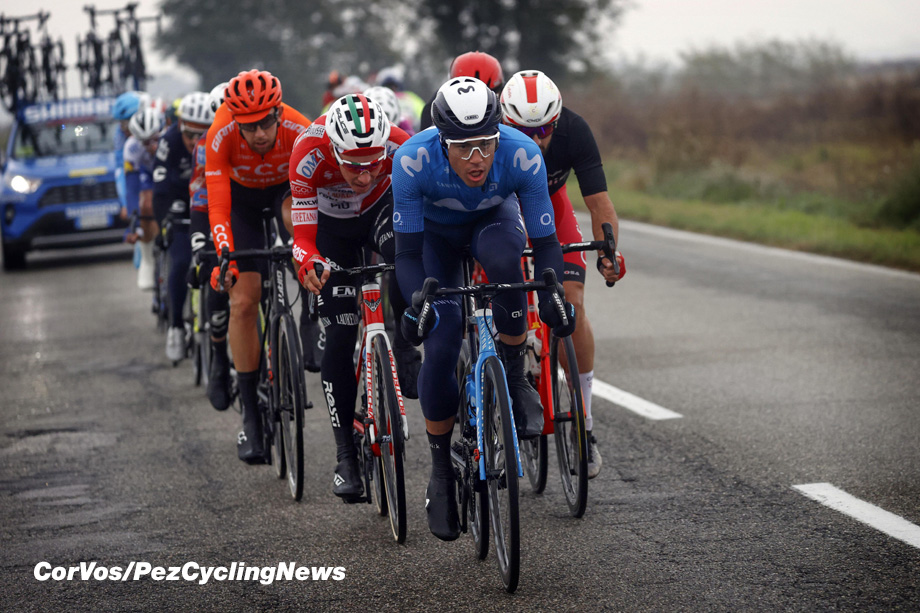 The break was eventually allowed to go

Cerny started the last 15 kilometres towards Asti with a lead of 40 seconds. The five pursuers did not accept that and worked well in the chase. They got closer to Cerny little by little, but the difference stuck around 20 seconds. The Czech dived into the last 2 kilometres with enough time to claim the stage victory in Asti. 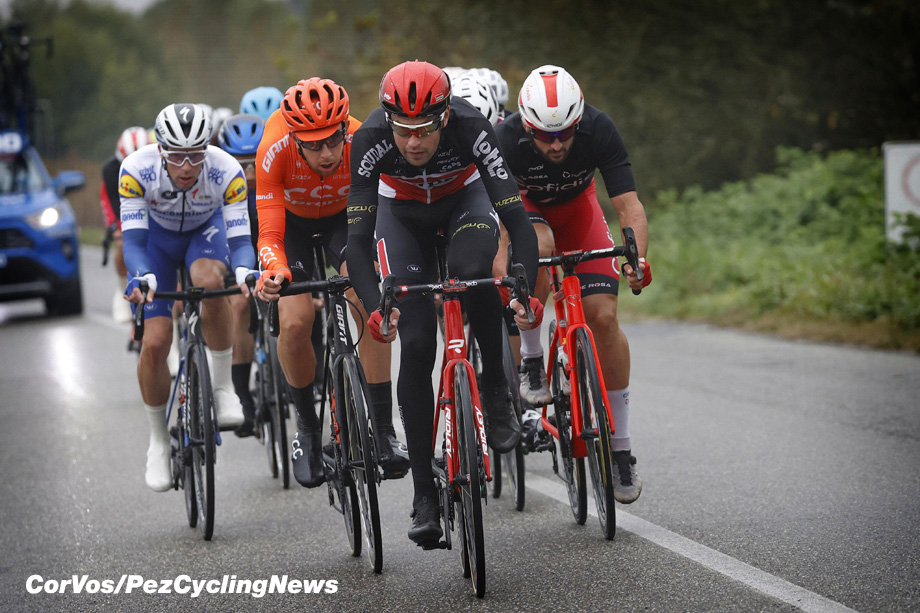 It was a strong break, even if the peloton wasn’t interested

Campenaerts managed to finish second with an attack in the last kilometre. Behind him Mosca won the sprint for third place against Clarke, Keisse and Armée. 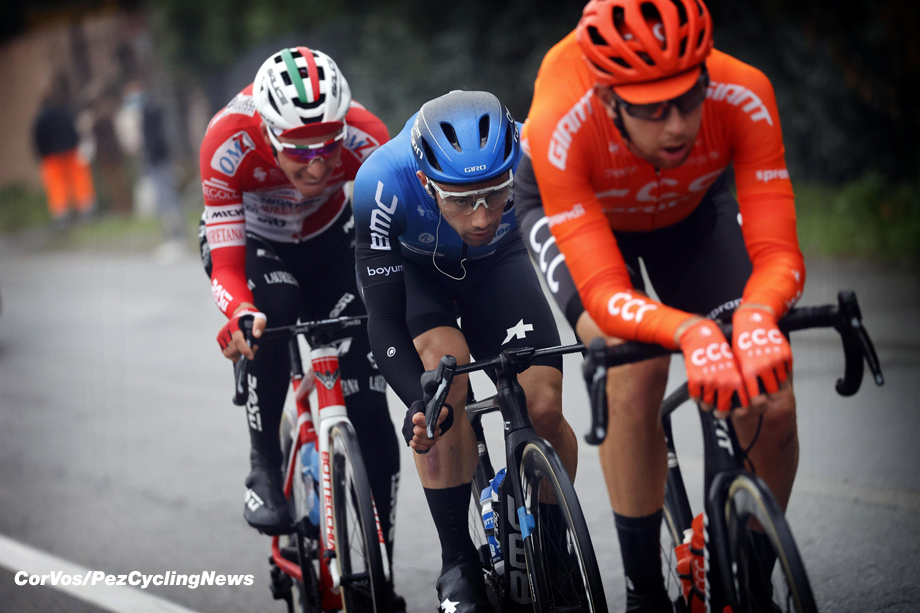 The money was on Campenaerts, but…

The peloton crossed the finish line almost 12 minutes behind the stage winner. Tao Geoghegan Hart, third in the rankings, tried in the wet final with an attack to grab some seconds on Kelderman and Hindley, but Deceuninck – Quick-Step did not allow it. All favourites crossed the line in the same time and Kelderman remains in the pink jersey. Saturday is the last mountain stage of this Giro with finish the in Sestriere. The Giro ends on Sunday with an individual time trial to Milan. 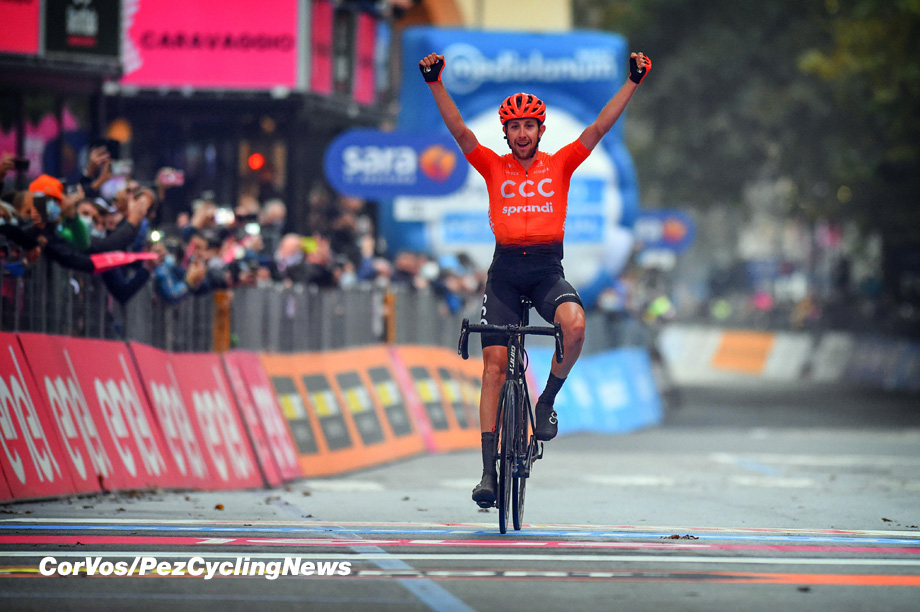 Stage winner Josef Černý (CCC): “It’s incredible, I have no words. Today my dream has come true, I am very happy. I dedicate this success to my team and my family! I still cannot believe it, I cannot describe how I’m feeling right now!” 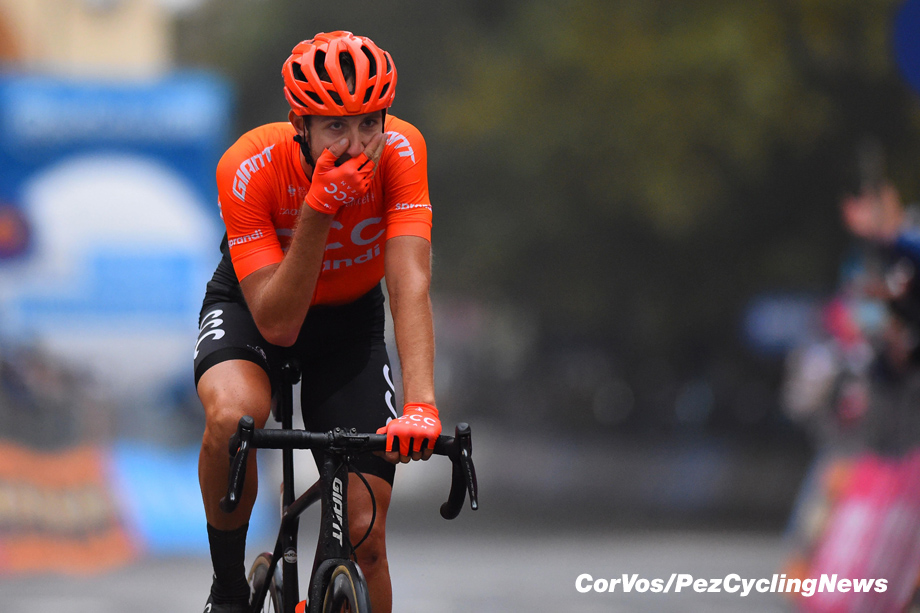 Maglia Rosa, Wilco Kelderman (Sunweb): “I’ve enjoyed every minute wearing the Maglia Rosa today. I’m quite confident I can retain it tomorrow as well. This morning the weather was bad, it was very cold. This week has been tough and it’s risky for our immune systems. I am grateful to RCS Sport for listening to us and for having shortened the stage.”

# Keep it PEZ all the way to Milano on Sunday. #