Hindley in Pink as Kelderman cracked

Giro Stage Report: Stage 20 of the Giro d’Italia turned the podium upside down as the climb of Sestriere put INEOS Grenadiers’ Tao Geoghegan Hart across the finish-line first and Jai Hindley (Sunweb) into the pink jersey, both on the same time. Wilco Kelderman couldn’t hold the pace and dropped to third. Sunday’s time trial will decide this year’s Italian Grand Tour. 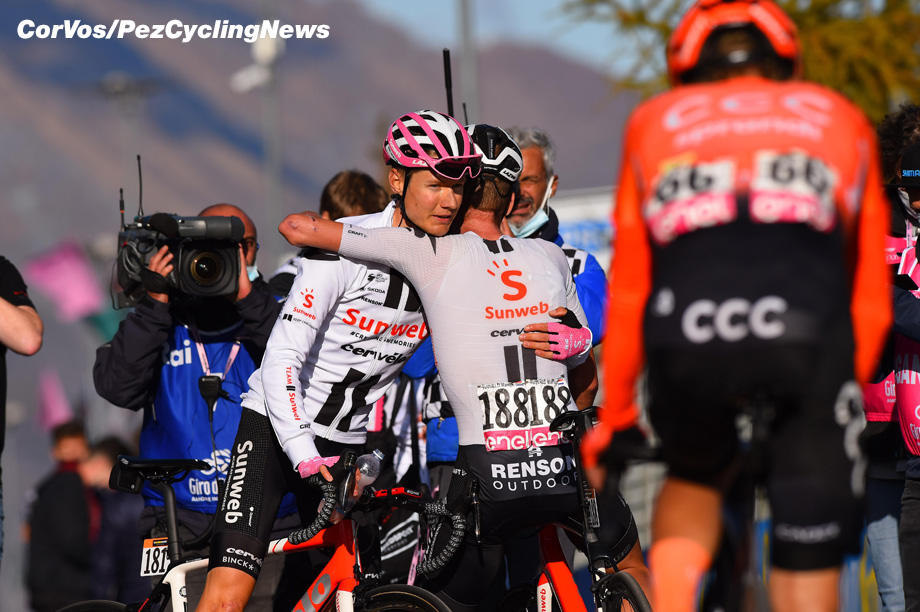 Wilco Kelderman will not start the final time trial to Milan in the pink jersey on Sunday. The Dutchman cracked on the last mountain stage to Sestriere and lost one and a half minutes to stage winner Tao Geoghegan Hart and teammate Jai Hindley. Hindley takes over the pink, but Geoghegan Hart is on the same time. 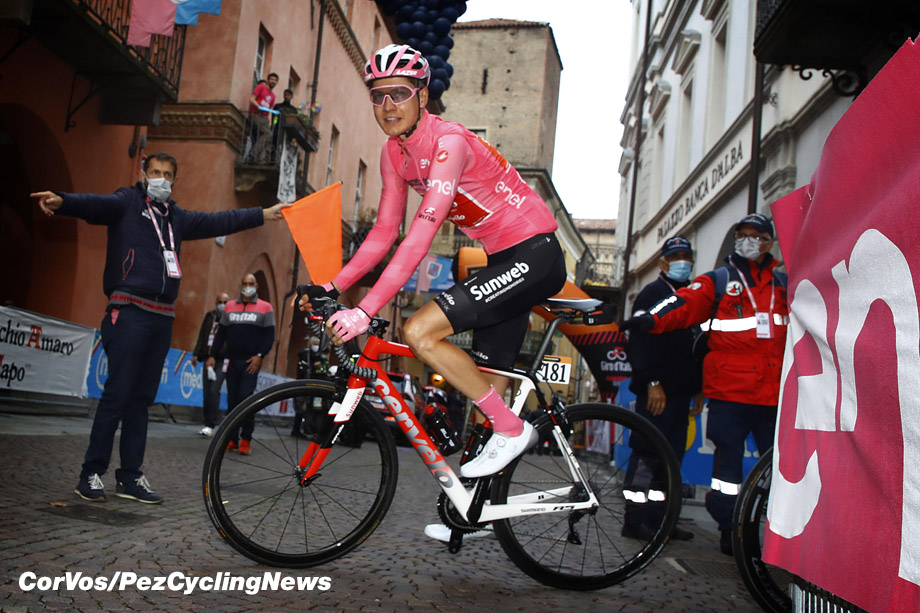 Wilco Kelderman will want to be in pink tomorrow in Milano

Stage 20. Alba-Sestriere – 190km
An Alpine stage featuring over 3500m in vertical elevation. From Alba the route goes to Pinerolo across the plain through medium-wide and straight roads. Then the climb begins for the first passage through Sestriere (the riders will not pass over the finish line). A descent to Cesana Torinese follows, before climbing back up to Sestriere through Sauze di Cesana. The route then crosses the finish line, where a GPM (KOM) is assigned. The riders descend again to Cesana Torinese for a second lap of the circuit before an uphill finish in Sestriere.

Last km
The last few kilometres are all on the sp.215 with a medium-wide and well-paved carriageway. Of note is a short tunnel (100m) in Grangesises and a small roundabout 300m from the finish. The 250m finishing straight is on 7m wide asphalt. 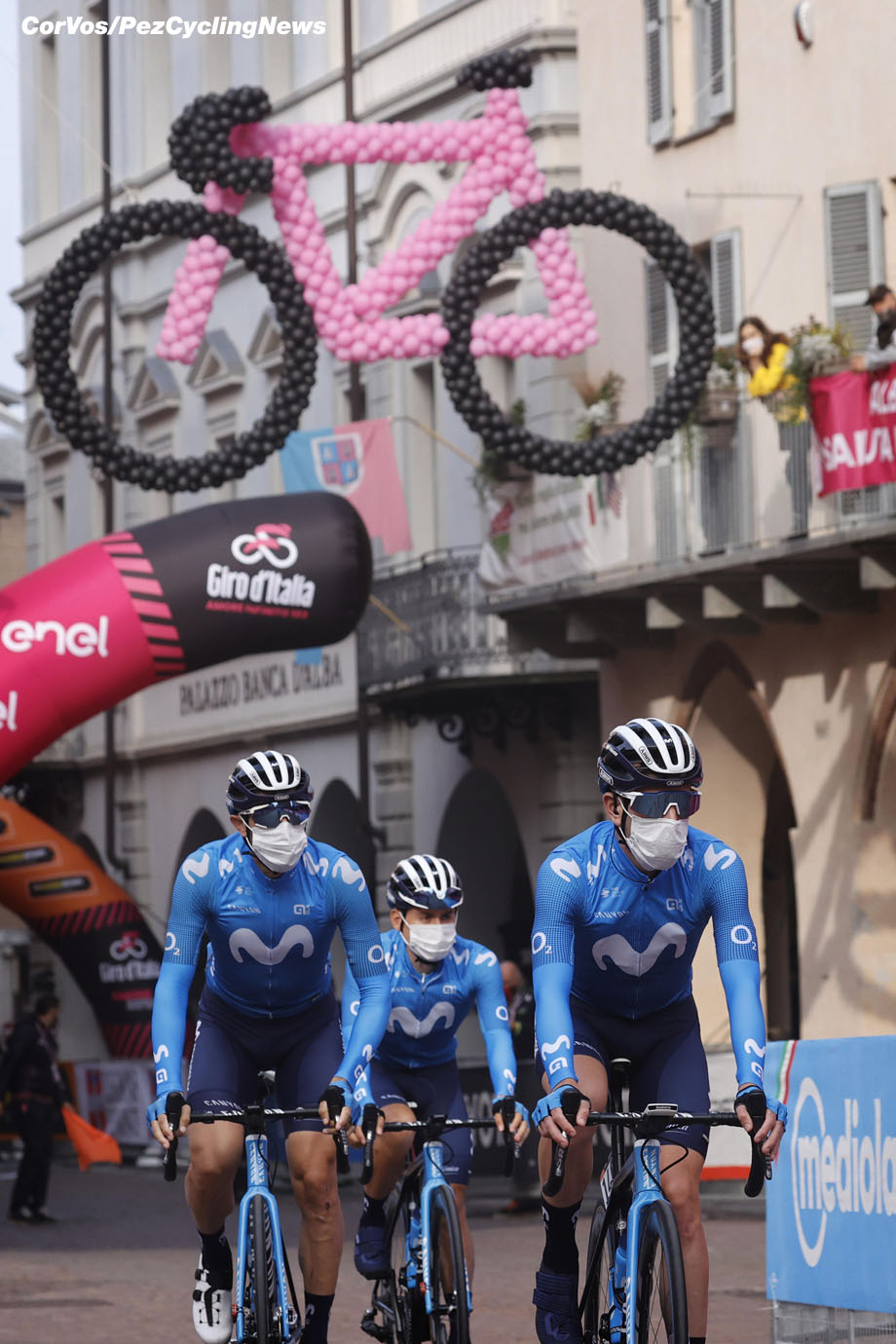 Twelve and fifteen seconds was Wilco Kelderman’s lead before the start of the last mountain stage to Sestriere. The Sunweb rider had to keep a close eye on Tao Geoghegan Hart, third overall, just fifteen seconds from the pink. And Jai Hindley, his teammate and second overall, could also play a crucial role on the way to the ski village of Sestriere. 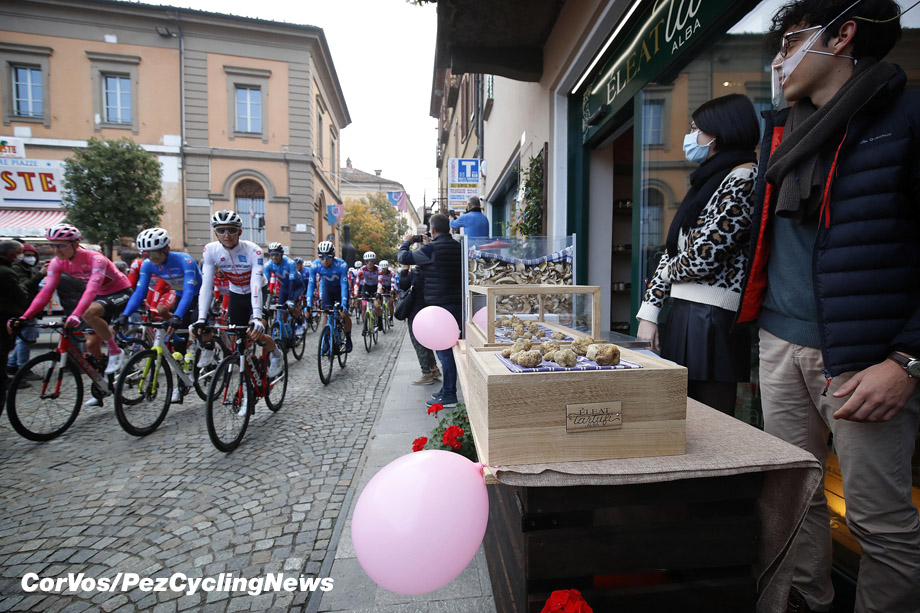 A tough and important day ahead

Initially, the climbs of the Colle dell’Agnello and the Col d’Izoard were in the road book, but the French government banned passage through their territory. Mauro Vegni had to return to the drawing board to come up with an alternative stage. A fairly long mountain stage with a triple climb of Sestriere. 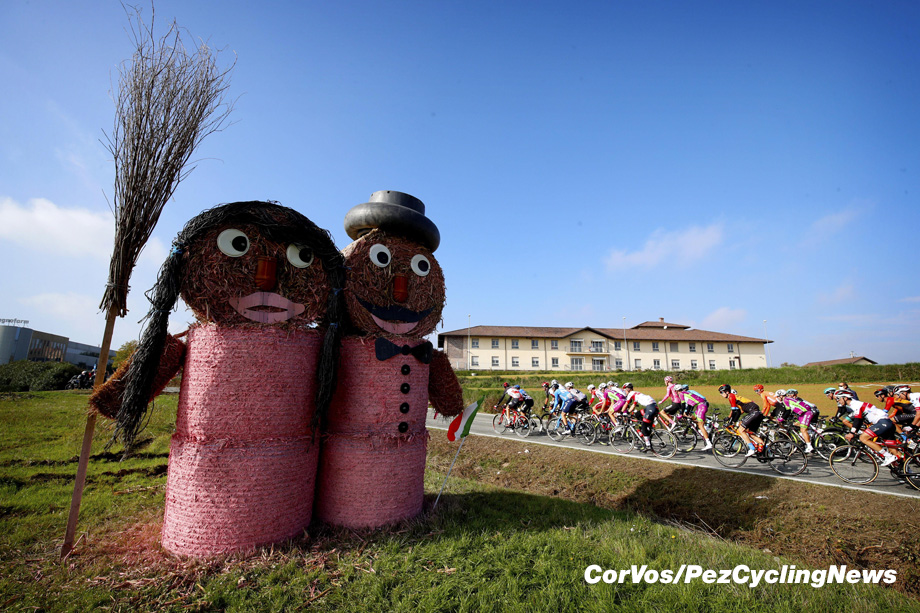 The farmers have been busy

The break of the day was established quite quickly with 21 riders. There was no immediate danger for the GC men, as the best-placed rider, Brandon McNulty was at more than 33 minutes to Kelderman. There were also a lot of sprinters at the front with purple jersey wearer Arnaud Démare, Elia Viviani, Davide Cimolai, Davide Ballerini and Andrea Vendrame. 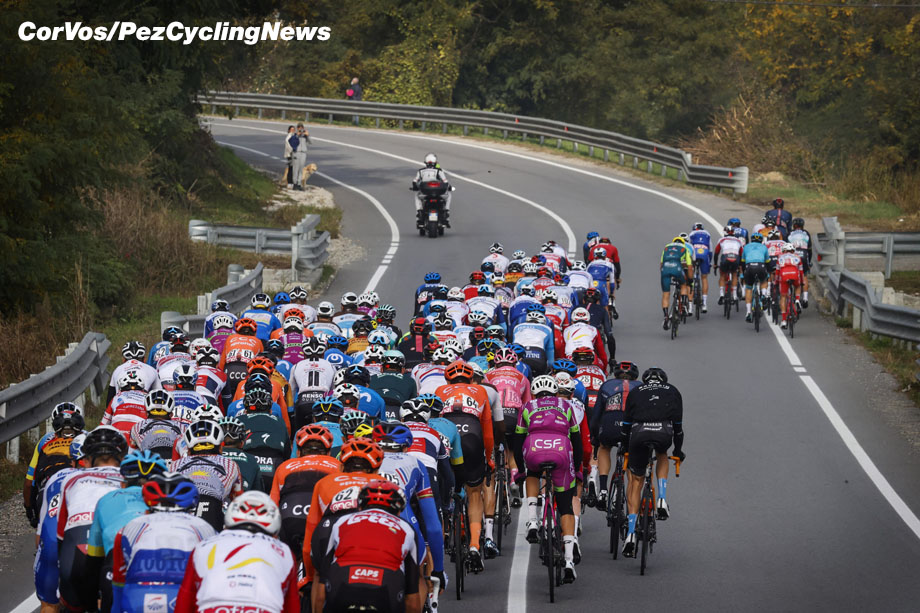 The break trying to escape 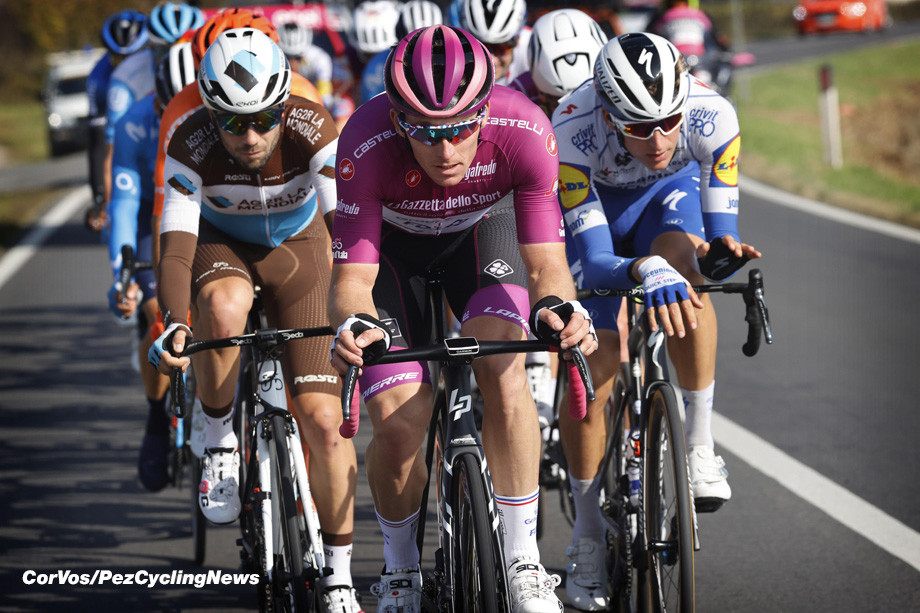 Démare is wearing the only jersey we are sure of

In the peloton Astana (for Jakob Fuglsang) and Bahrain McLaren (for Pello Bilbao) did the work, causing the lead of the 21 to fluctuate around 7 minutes. Fuglsang apparently felt good on the last mountain stage of this Giro and so he let his teammates go full steam ahead. The Danish climber had plans. 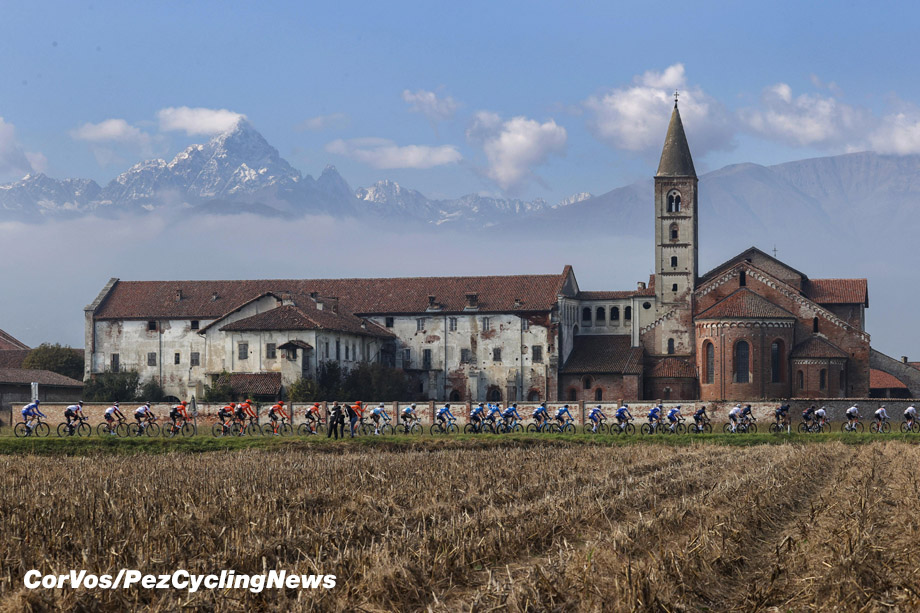 Sestriere on the horizon

On the run-up to the first climb of Sestriere, the difference was reduced to 5 minutes. Very little happened on the climb itself. It went too fast for a few escapees, while in the peloton one man from Astana was in the lead for Fuglsang. On the steeper ramps of Sestriere, INEOS Grenadiers’ men shoot forward. Salvatore Puccio was the first rider to sacrifice himself for leader Hart. 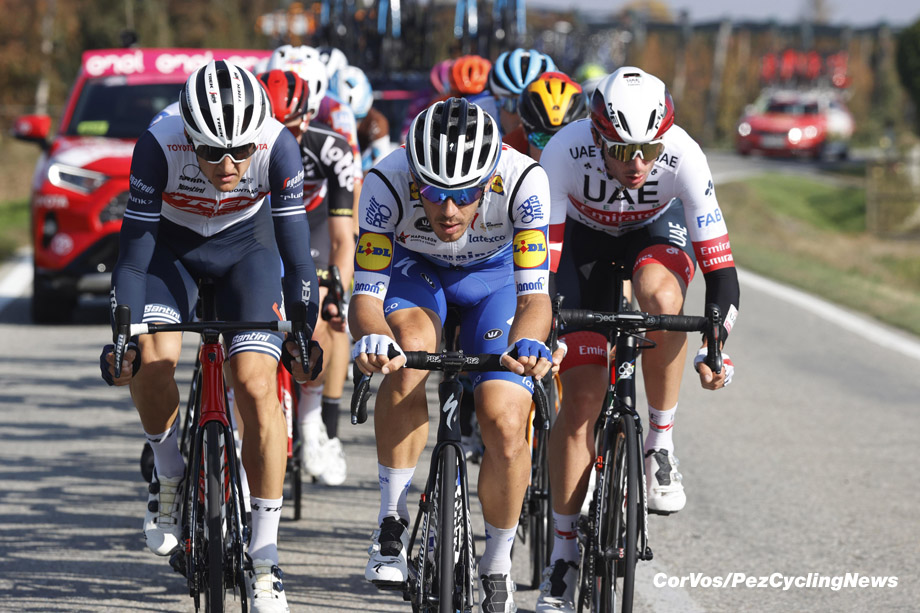 Deceuninck – Quick-Step’s Ballerini had a plan for the day

Filippo Fiorelli was at the top in Sestriere with 52 kilometres to go. The Italian from Bardiani-CSF-Faizanè managed to take 12 KOM points, Ruben Guerreiro’s mountain jersey was in trouble. On the descent from Sestriere, Ballerini went crazy, hoping to start the second climb of the Alpine climb with a lead. 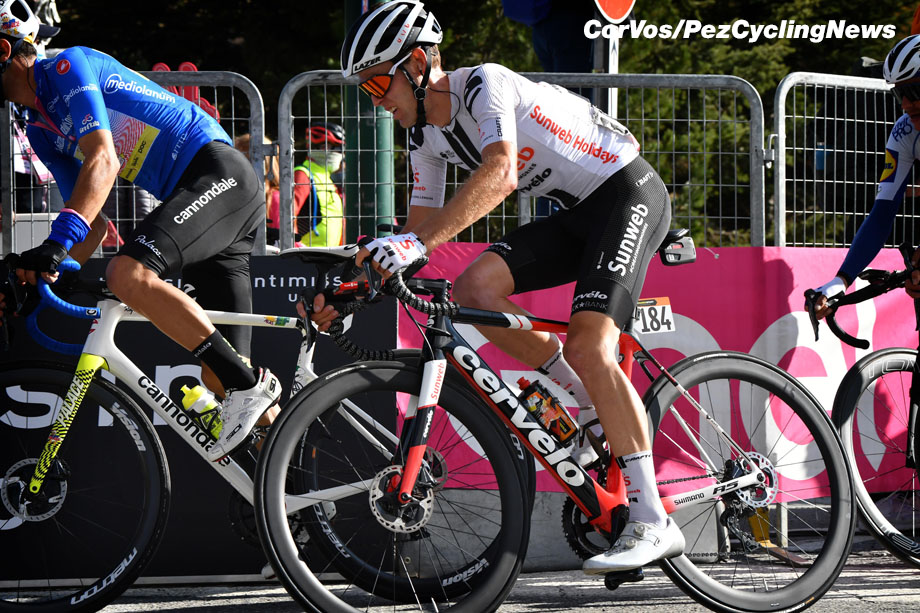 Hindley only had to watch Geoghegan Hart

The fast Italian succeeded and started the next climb with a lead of half a minute. The leading group completely fragmented on the way up, leaving everyone on their own. In the group of favourites, Puccio was relieved by three-time stage winner, Filippo Ganna, who managed to thin out the group in time trial mode. 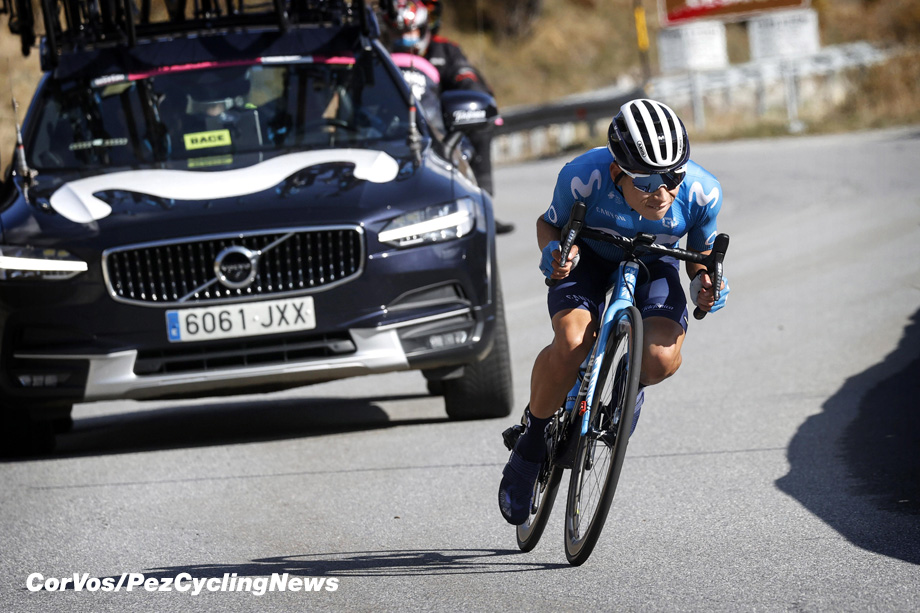 Einer Rubio had no chance of a stage win, but he tried

A very strong Dennis took care of the necessary demolition work, Kelderman was dropped, as was Rafal Maja. In the meantime it was the turn of the Stelvio’s strongman, Rohan Dennis, to completely empty himself in the service of Hart. The Australian time trial specialist turned out to have another top day: Fuglsang, Pozzovivo and Nibali had to let go. 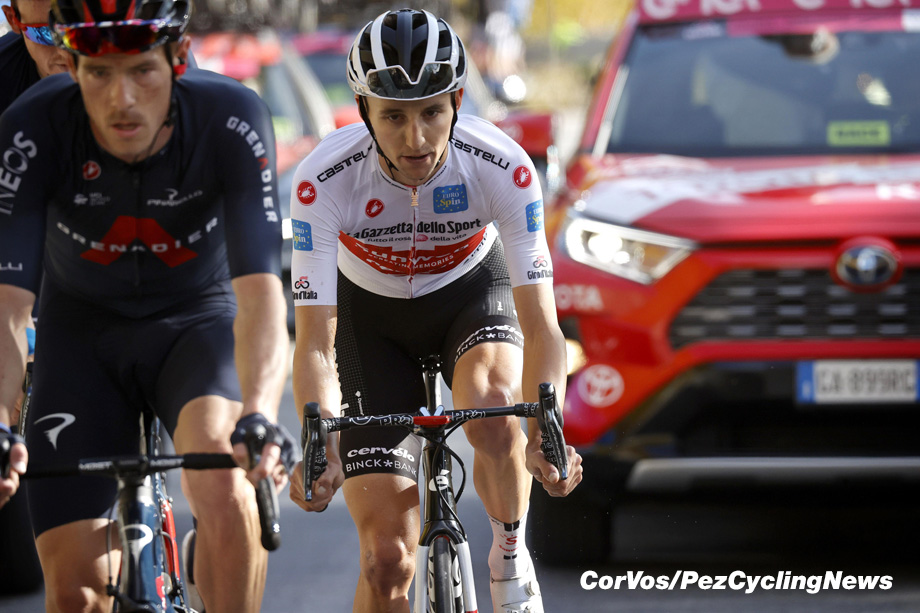 Rohan Dennis was the engine of the race, again

At 30 kilometres from the finish, Jai Hindley was looking back anxiously, as Kelderman had to leave a few meters. The leader in the Giro was visibly struggling and had to let go of the super trio (Dennis, Hart and Hindley). Kelderman found himself in a group with Bilbao, Almeida and Pozzovivo and Nibali. The difference between the Hart-Hindley group and the Kelderman group quickly increased to 40 seconds. 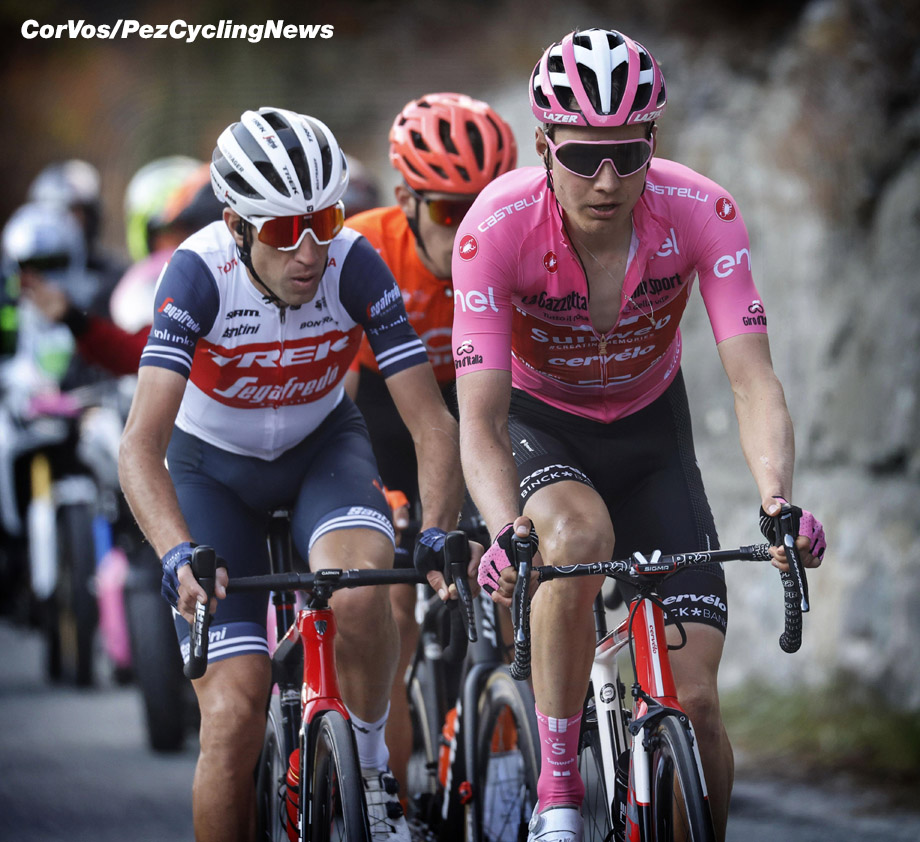 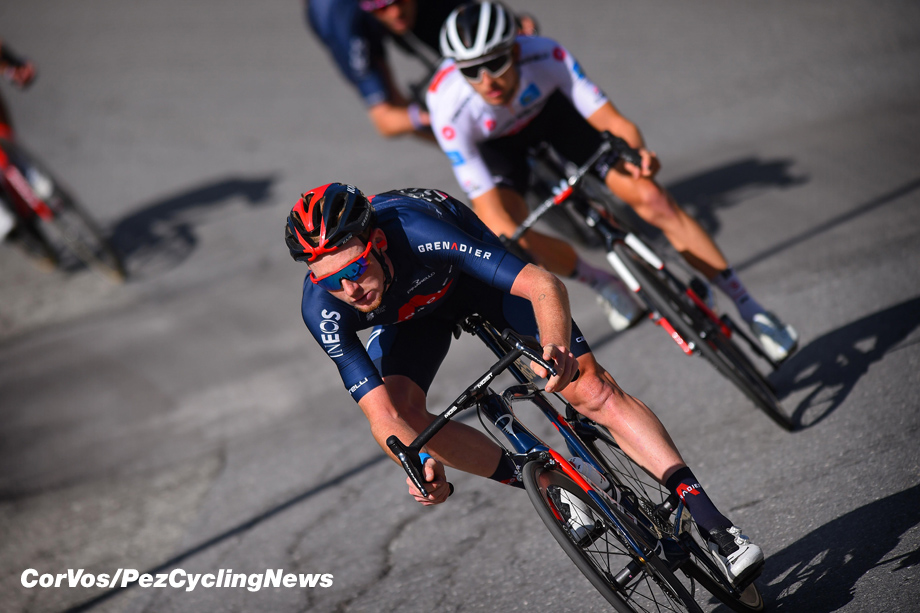 The two strongest men of the Giro – Hindley and Geoghegan Hart

In the meantime, Einer Rubio was the first to reach Sestriere, the Colombian still had to complete almost 30 kilometres. Dennis, Hart and Hindley followed after a minute and a half, then it was a good 40 seconds wait for the group containing Kelderman. The Dutchman could still count on support from riders from Trek-Segafredo (for Nibali) and Deceuninck – Quick-Step (in the service of Almeida). The difference continued to fluctuate around 40 seconds, but Kelderman and co were unable to reconnect before the final climb. We now had a hand-to-hand fight for the stage victory and the pink jersey. 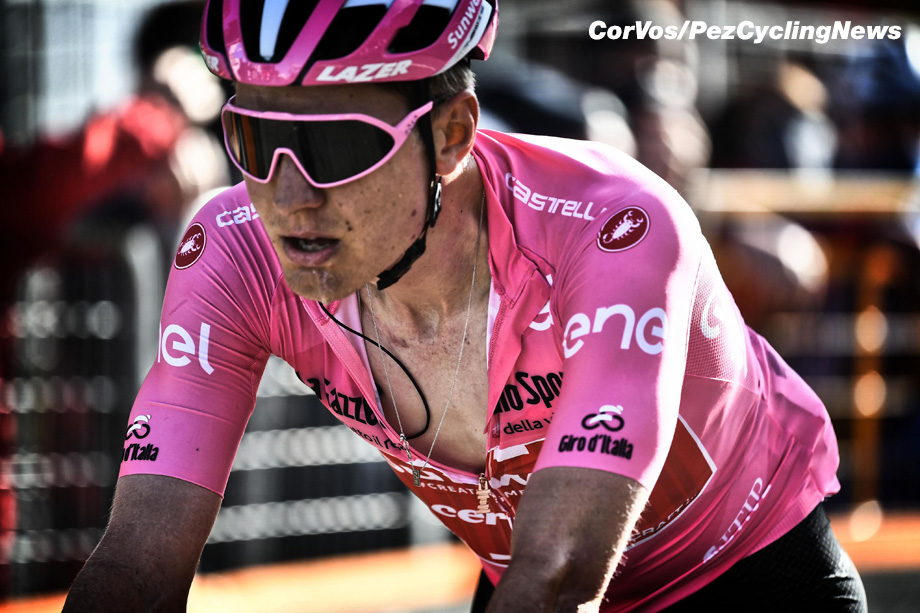 Rubio, Serry and Ballerini, the last survivors of the early break, started the final climb together. However, the three front runners were soon joined by Dennis, Hart and Hindley. Kelderman’s pink dream seemed to come to an end, as the difference increased to one and a half minutes. It was the final climb between Hart and Hindley, the two best climbers in this Giro d’Italia. 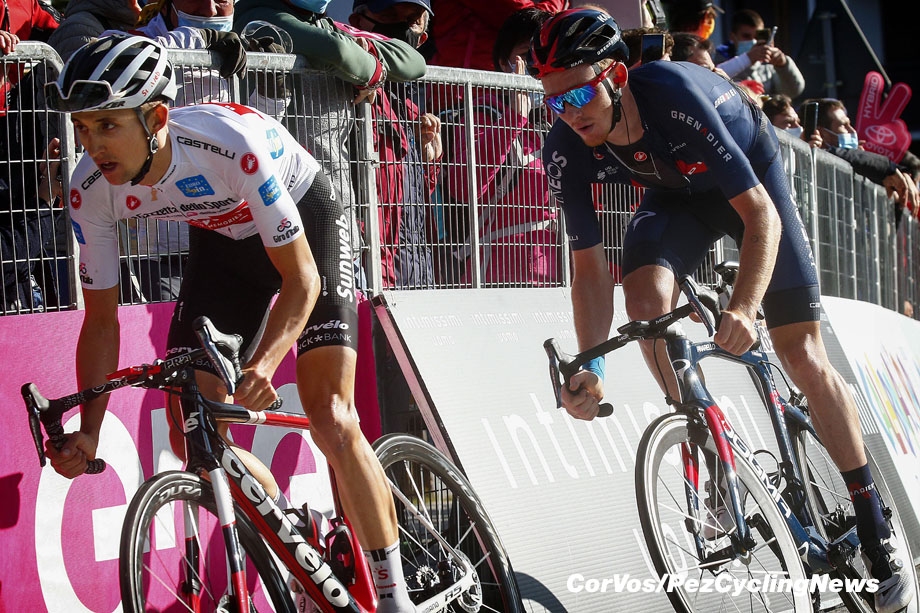 The battle was for the stage and the pink jersey

The Australian took the intermediate sprint in Sauze di Cesana, at 7 kilometres from the line, for 3 bonus seconds. Hart managed to get two. On the steeper ramps of Sestriere, Hart still left the work to Dennis, which narrowed the difference with the Kelderman group. The pink jersey followed with 5 kilometres to climb, one and a half minutes from the front runners. A kilometre further it was only one minute. 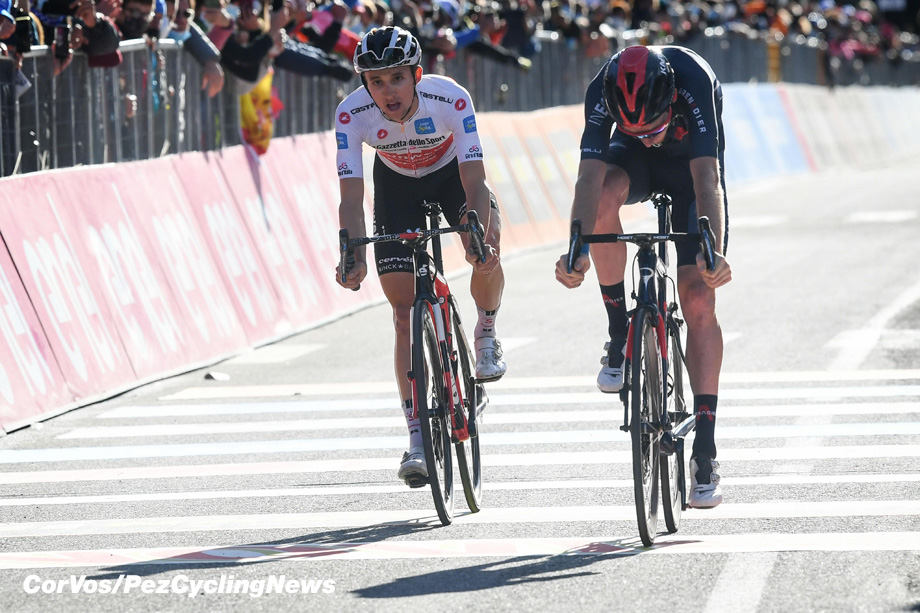 It came down to a sprint

Kelderman had to match an acceleration of Almeida, who managed to impress in the penultimate stage. Kelderman couldn’t follow, while Hindley tried to drop Hart with two hard attacks. The Briton proved to be tough and refused to give in, causing the pace to slow again. This gave Dennis the opportunity to reconnect and lift the pace. 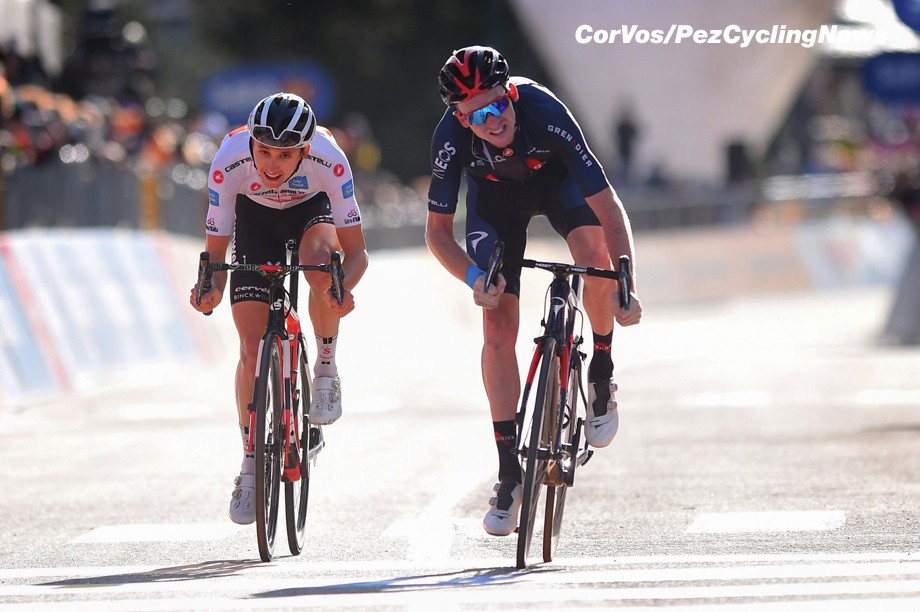 Hindley and Hart eventually had to go for a sprint for the victory. The INEOS Grenadiers’ rider started the sprint first and managed to hold Hindley off. This means that Hart and Hindley are on the same time with the final time trial to Milan ahead. The Australian now has the pink jersey, but Hart is on the same time and is the better time trialist. Kelderman drops to third place in the standings, at 1:32 from his teammate Hindley. 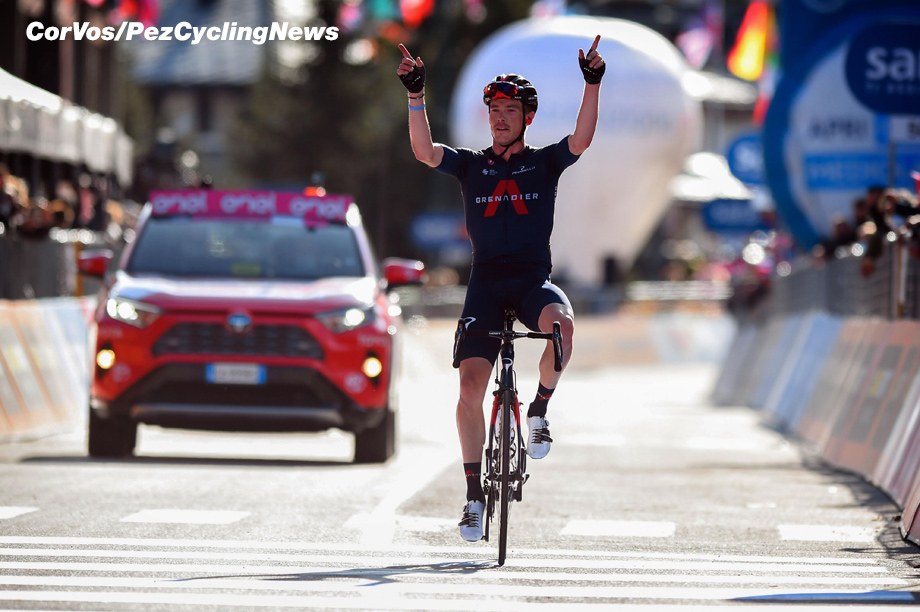 The man of the day, again, Rohan Dennis

Stage winner Tao Geoghegan Hart (INEOS Grenadiers): “I’m very happy for myself, for my team and for the Giro: today was a beautiful day! Tomorrow’s time trial will be a matter of legs, the route is short, I hope to have a good day and a bit of luck, then we will see.” 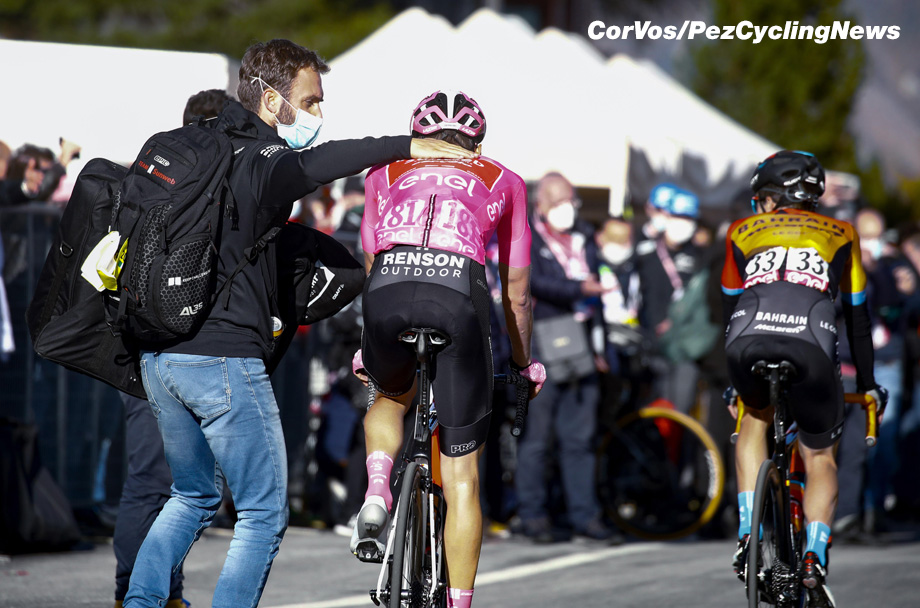 Kelderman finished out of the jersey

Maglia Rosa Jai Hindley (Sunweb): “Incredible, I have no words. From an early age I dreamed of wearing the Maglia Rosa, it’s a huge honour for me, I still don’t believe it. Tomorrow I’ll give my best in ITT.”