Stage 5 Race Report: Time trial specialist and stage 1 winner, INEOS Grenadiers Filippo Ganna surprise everyone by winning the hilly stage 5 to Camigliatello Silano. The young Italian went with the early break and then left them to solo to the finish. Behind; João Almeida (Deceuninck – Quick-Step) held the pink jersey, finishing in third as the GC men looked at each other. 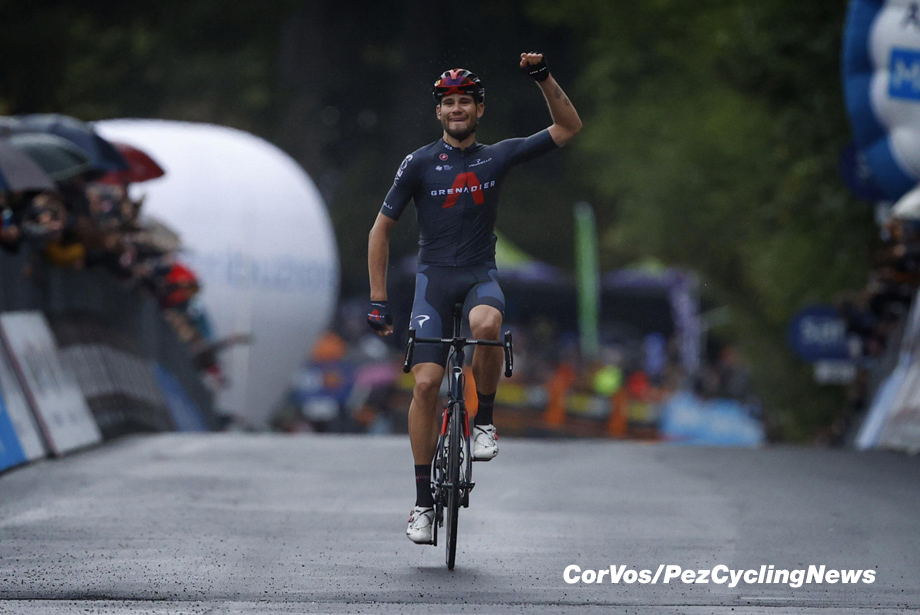 After four days of racing in Sicily, the Giro d’Italia continued on the mainland today. The fifth stage was the first really long stage, a tough exercise over 225 kilometres between Mileto and Camigliatello Silano. 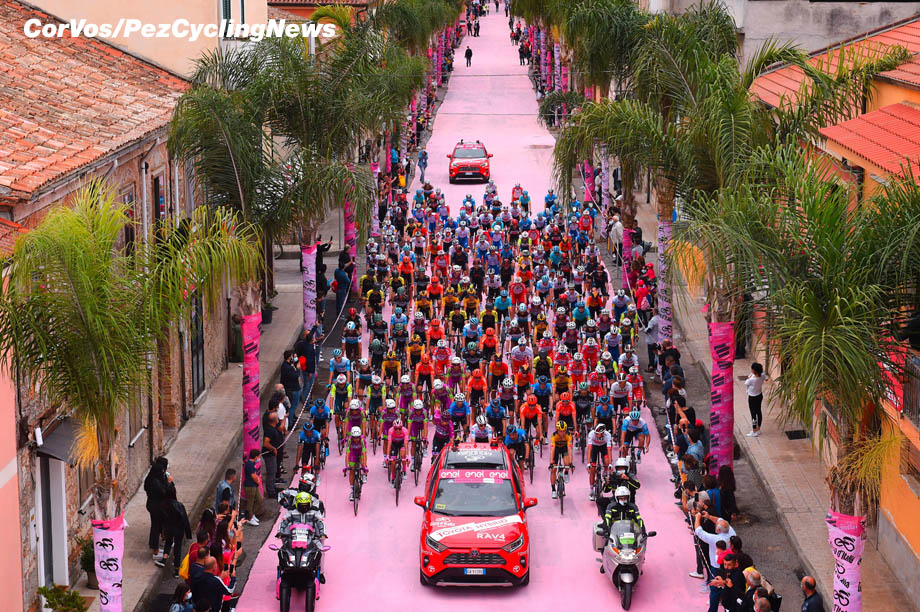 Even the road is pink!

Stage 5 – Mileto – Camigliatello Silano – 225km
The stage has a very wavy profile with several climbs, including three categorised ones. The route briefly heads north along the ss. 18 and travels across Calabria following the winding, bumpy and undulating profile, eventually reaching the Ionian coast. After passing Catanzaro Lido and Catanzaro (categorised climb), and after taking in the Tiriolo climb, the route then undulates continuously for approximately 70km across the Sila. Past Cosenza, the road starts to go up, heading for Valico di Montescuro. The climb, nearly 25km in length, has a 5.6% average gradient with peaks reaching 18% (in Spezzano della Sila). The road is wide, and ascends in hairpins. Past the Valico, the finish is a little more than 10km away. 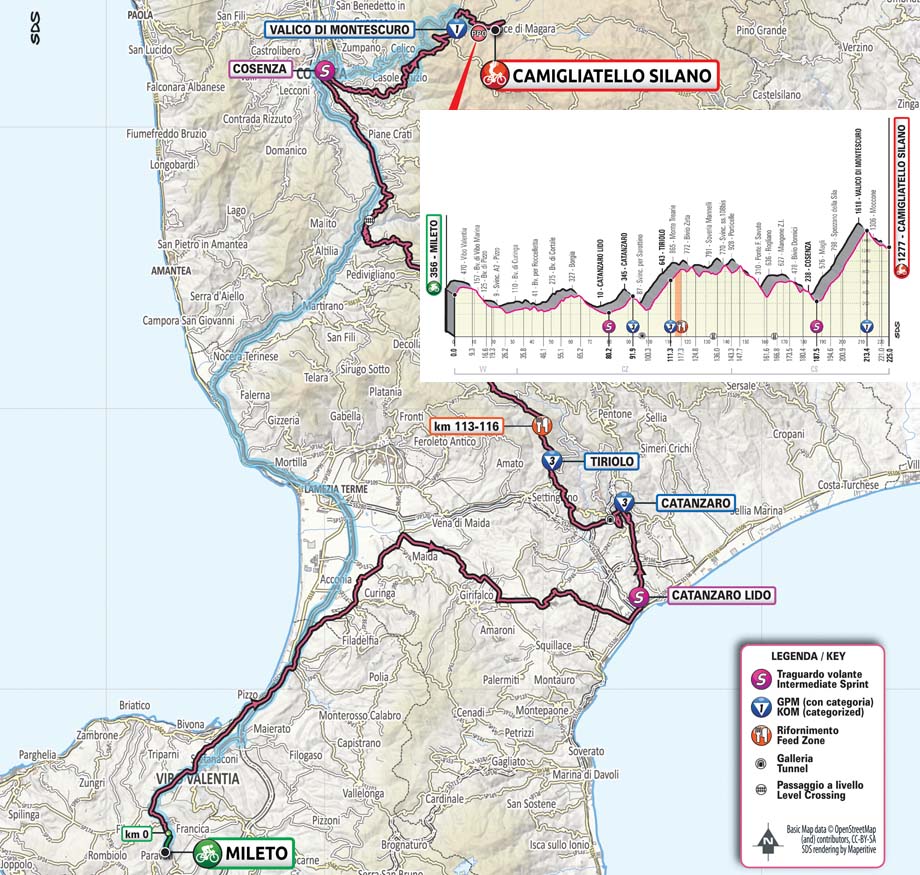 Final KMs
The road plunges steeply into Moccone (4km from the finish), then a milder descent leads all the way to Camigliatello. The route crosses part of the urban area (on narrowed roadway at points), then takes a U-shaped bend with 1.2km to go, heading for the finish. Two wide bends (with approximately 400m to go) lead into the 6.5m wide home straight. 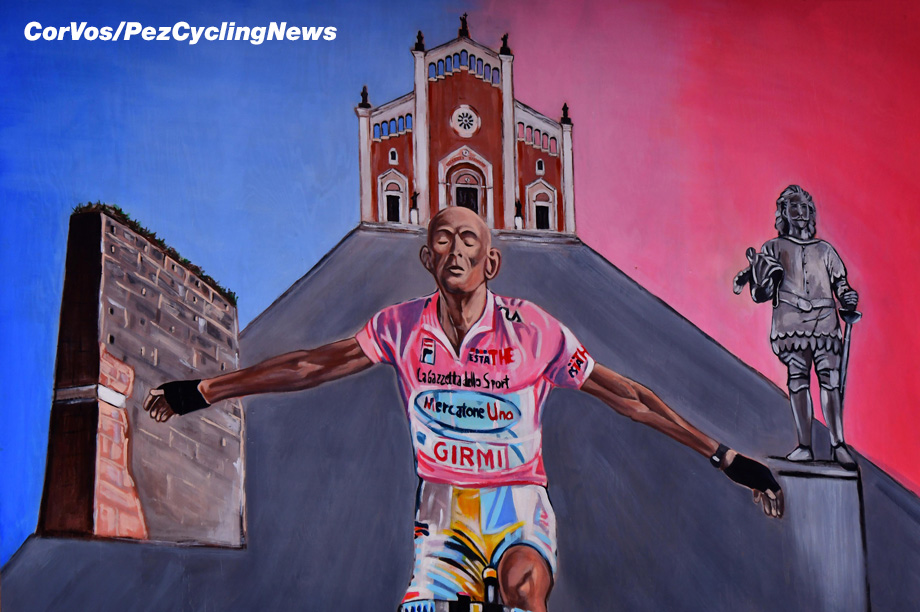 There were a lot of attacks from the start by riders who wanted to be in the early break. Thomas De Gendt was very active, after he was in the break on the second stage. But the Belgian missed in the leading group, which was only formed after 45 kilometres. Two groups of four riders merged into a leading group of eight. 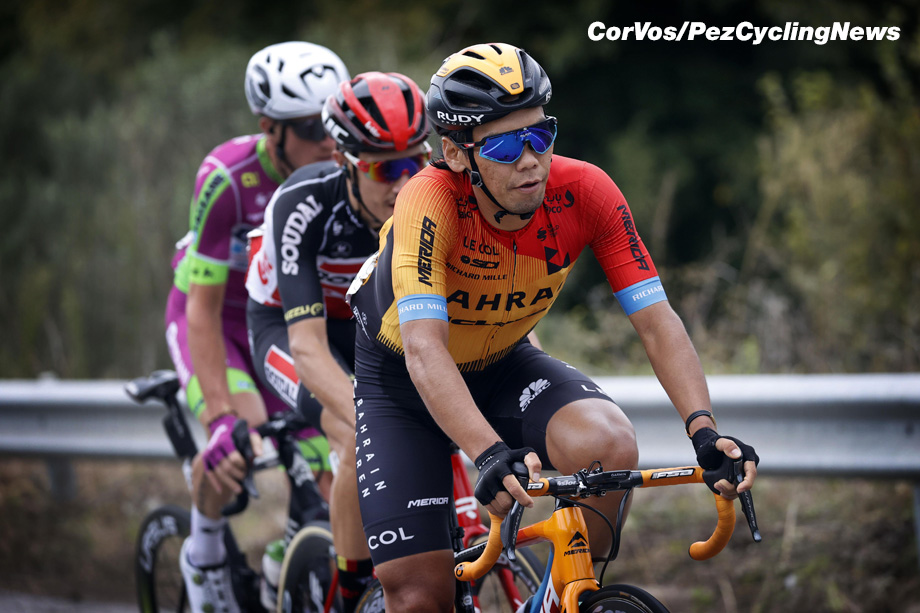 The start of the break 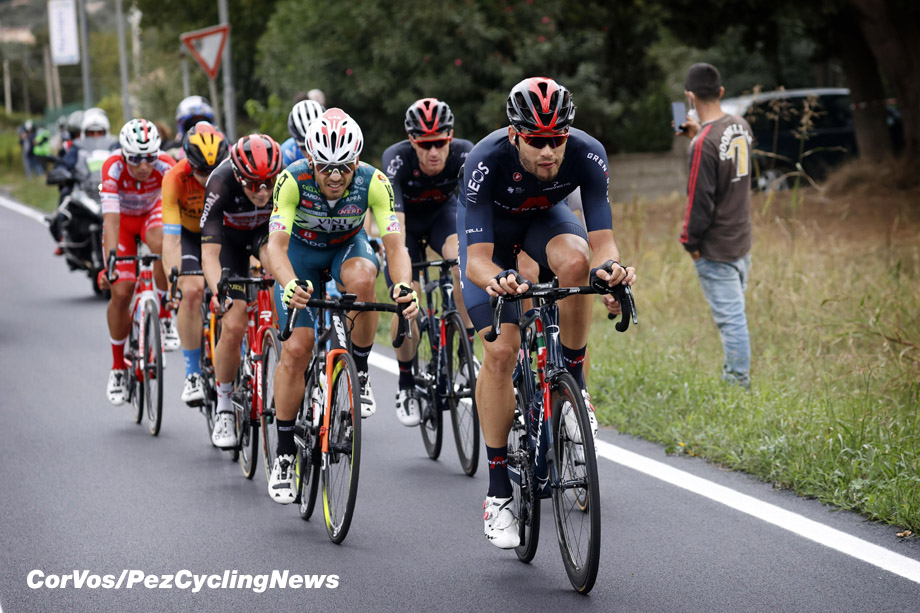 Ganna leading the break of the day

After 80 kilometres, the escape reached the intermediate sprint in Catanzaro Lido and their lead on the peloton had already increased to more than 4 minutes. On the climbs of the Cat 3 to Catanzaro and Tiriolo, Zardini was first over the top. In the meantime, the race lost Pieter Weening, who was unable to continue after his hard crash on Tuesday. 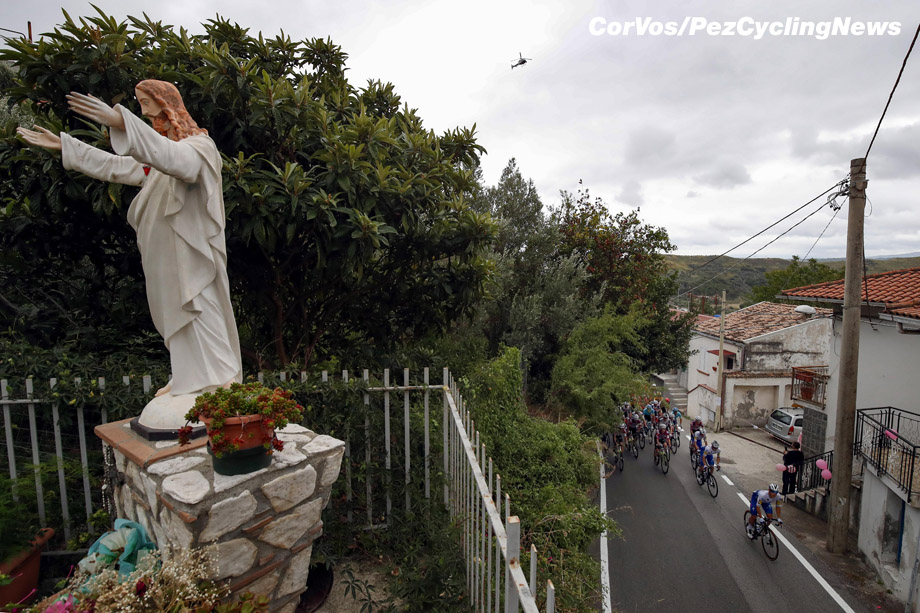 The break had the blessing of the peloton

The route went over many climbs to the intermediate sprint in Cosenza, where the breakaway also took the bonus. With a lead of 3 minutes, the eight leaders started the Cat 1 Valico di Montescuro, while Deceuninck – Quick-Step and Sunweb set the pace in the peloton. The pure sprinters were now in trouble, they will get their chances again in the following days. 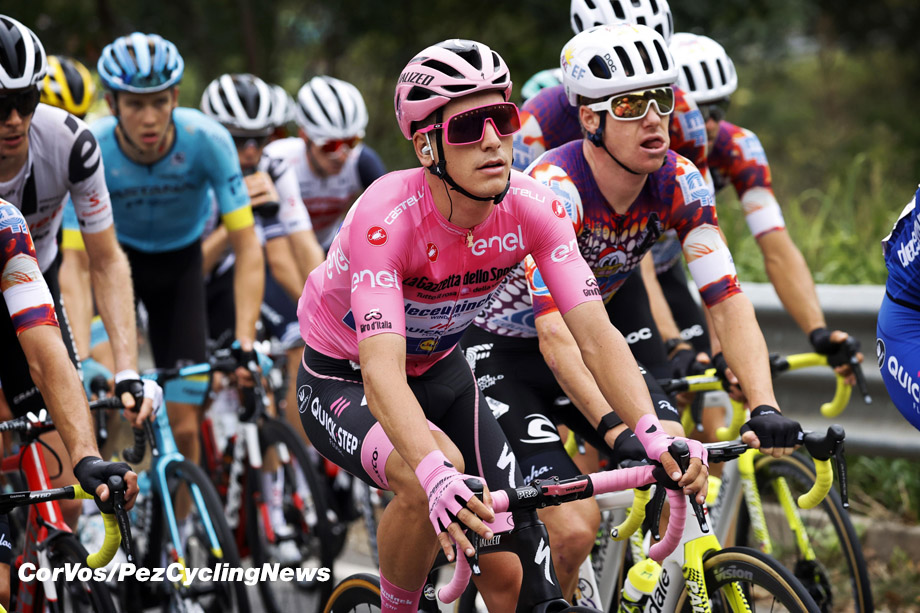 Another day in pink for João Almeida (Deceuninck – Quick-Step)

On the steep first kilometres of the climb, Hagen and Restrepo were the first to be dropped from the leading group, while Geoffrey Bouchard decided cross to the breakaway, but the Frenchman, winner of the KOM jersey in the Vuelta a España last year, did not get away from the peloton. Thomas De Gendt attacked with the young climber Einer Rubio on his wheel. First they picked up Restrepo and Hagen, later they also caught Puccio and Conti. 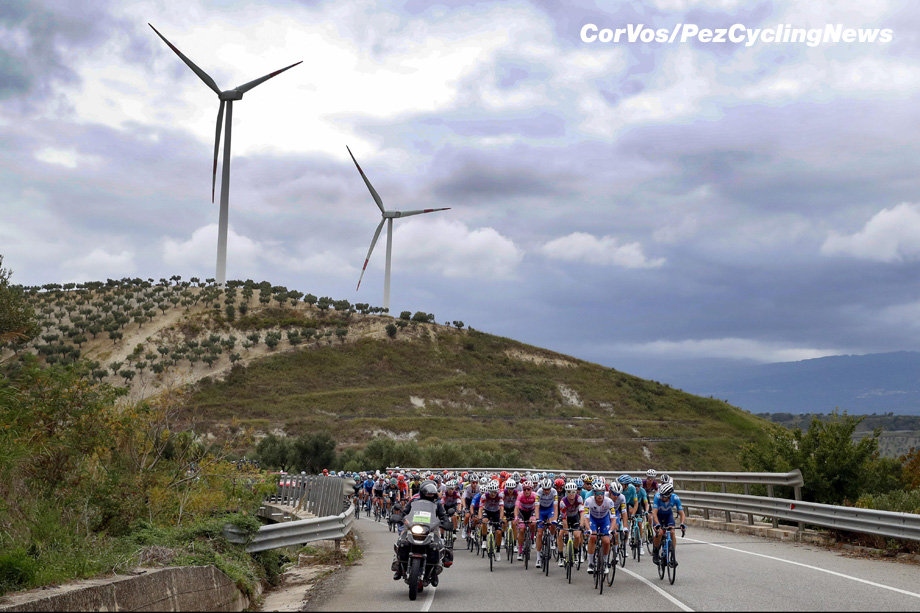 The peloton didn’t chase too quickly

Carretero, time trial world champion Ganna and Zandini turned out to have the strongest legs at the front. Just over half-way up the climb, De Gendt and Rubio caught the front riders. De Gendt was on a mission, that was clear, and only Rubio and Ganna could follow the powerful pace of the Lotto Soudal rider. Five kilometres from the top, it was the Italian from INEOS Grenadiers who managed to drop his new companions. 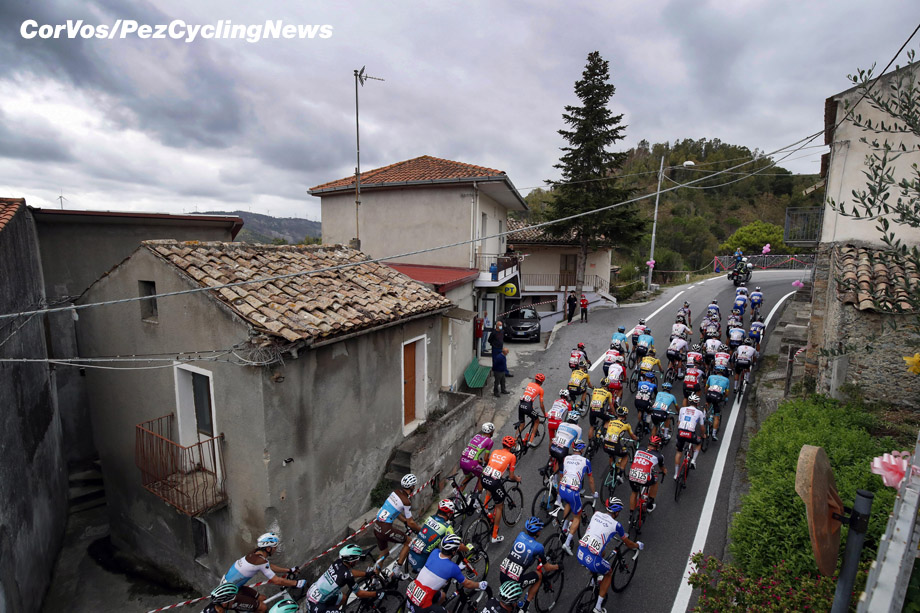 No flat roads around here

With both hand curled over the handlebars, Ganna raced away from De Gendt and Rubio, in the shade of the Valico di Montescuro. Despite the rain and the dense fog, the time trial specialist rode strongly on the long climb. His performance was not a total surprise, as eight months ago he was 6th at the summit of the Alto del Colorado in the Vuelta a San Juan. 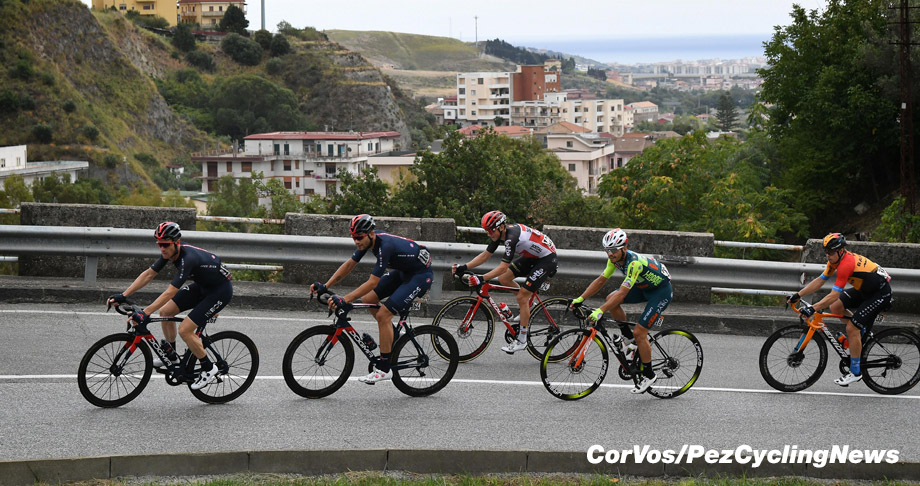 The big guy can climb

With a lead of more than a minute, Ganna started the descent to Camigliatello Silano. On the descent, Vincenzo Nibali took the lead as master, but the Giro winner of 2013 and 2016 was not given any space from Jakob Fuglsang. The pursuers did catch up a bit, but at the start of the final kilometre, Ganna was still ahead by 35 seconds. That turned out to be enough for his second stage victory. 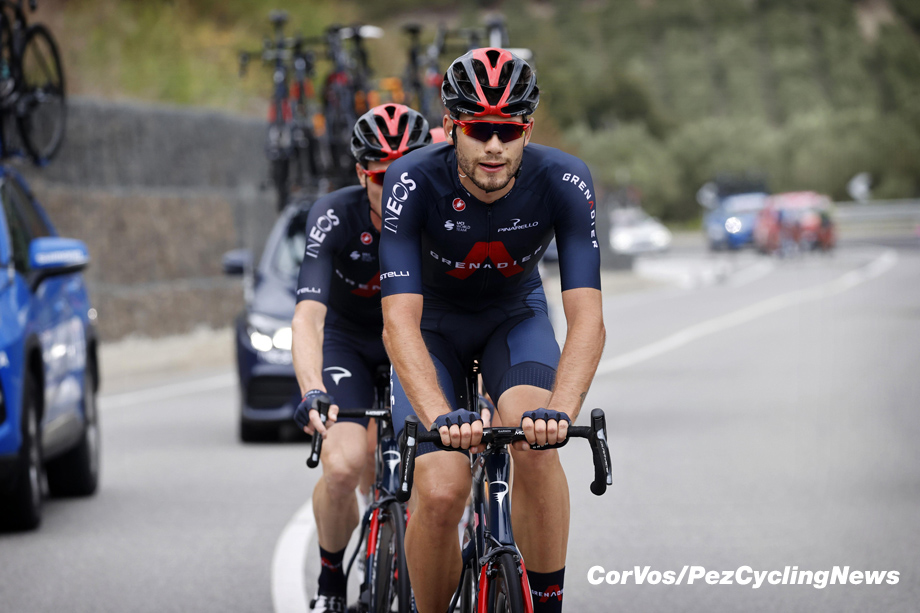 INEOS Grenadiers and Filippo Ganna had a plan

Thirty-four seconds later, the peloton crossed the line, with Patrick Konrad finishing second ahead of João Almeida. The Portuguese rider gained 4 bonus seconds and was well in-front of the other GC men. Wilco Kelderman took fourth place. Due to Ganna’s first place at the top of Valico di Montescuro, the Italian took the lead in the KOM classification from Jonathan Caicedo. 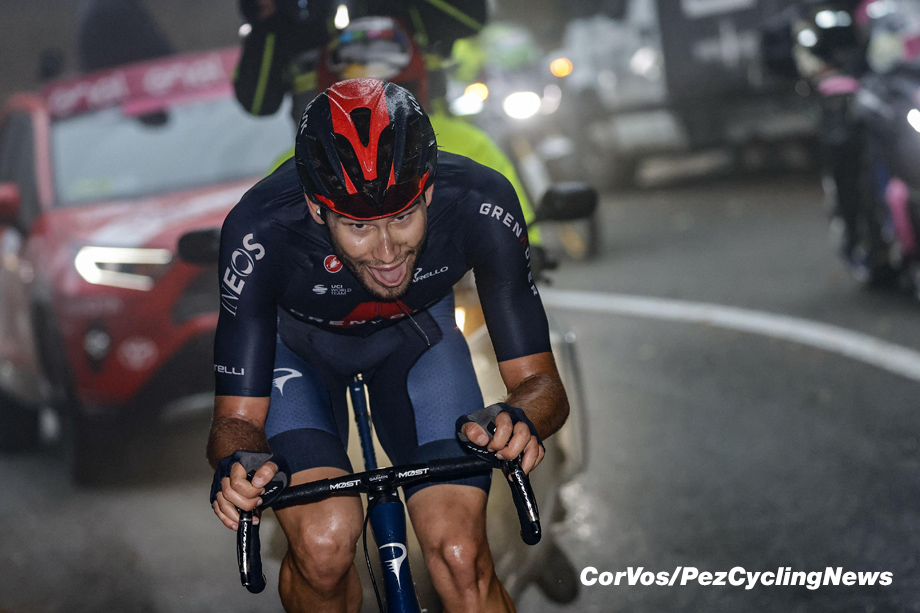 Going solo to the finish

Stage winner Filippo Ganna (INEOS Grenadiers): “It was not planned for me to go in the breakaway. Then after some attacks this morning I told Salvatore [Puccio] to stay on my wheel. We managed to go in the breakaway, then all went incredibly well. A success that partially redeems the team after Thomas’s unfortunate retirement.”

Maglia Rosa João Almeida (Deceuninck – Quick-Step): “It was a very cold stage, with some rain. I am happy with how I rode. After Caicedo was dropped I managed to stay with the main favourites and gave everything until the finish line.”