Another stage for the French champion

Stage 7 Race Report: After a windy day of echelons and crashes, it was the French national champion, Arnaud Démare (Groupama-FDJ) who won the bunch gallop into Brindisi and he made it look easy again. Peter Sagan (BORA-hansgrohe) took yet another second place with Michael Matthews (Sunweb) in third. The pink jersey stayed with João Almeida (Deceuninck – Quick-Step). 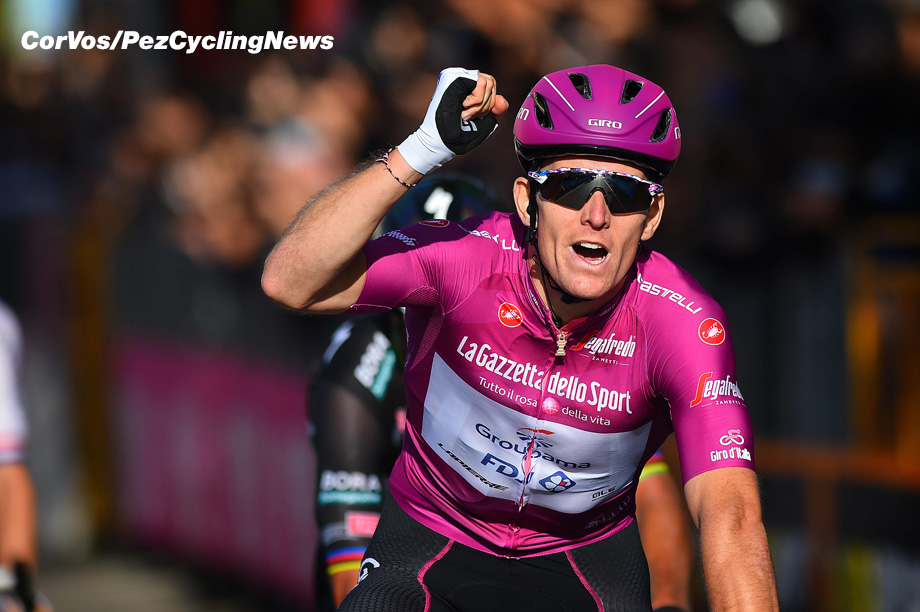 Stage win No. 3 for Arnaud Démare

The cross-winds cause problems for many, but stage 7 still ended in a bunch sprint. All the usual sprint suspects were there, but they stood no chance against the flying Frenchman – Arnaud Démare and his Groupama-FDJ lead-out men. 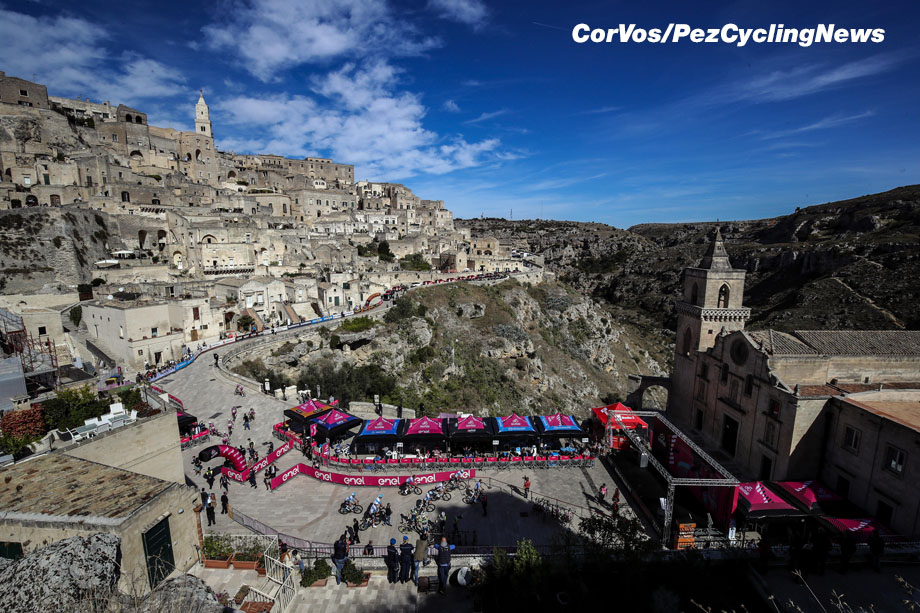 The start town of Matera

Final KMs
The final 5km run partly on wide and straight roads, and partly on city roads marked by series of bends and narrower points. From -5 to -2 km, the route runs mostly downhill, and then continues on a slight incline. There is one last bend with 1,200m to go, then a long home straight leads all the way to the finish, on 7.5m wide tarmac. 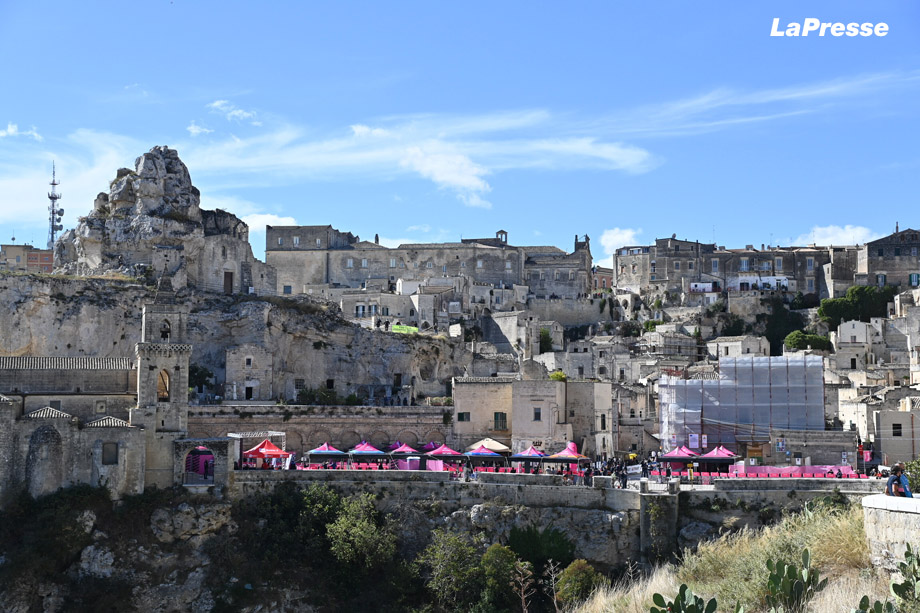 It was a nervous peloton on the seventh stage from Matera in Basilicata to the Apulian Brindisi. Not because of the climbs, because there was hardly any, but because of the dangerous crosswind. There was going to be echelons today and the chance of time losses. Under a blue sky with some small clouds, the stage started quietly with a break of four, who escaped in the first kilometre. 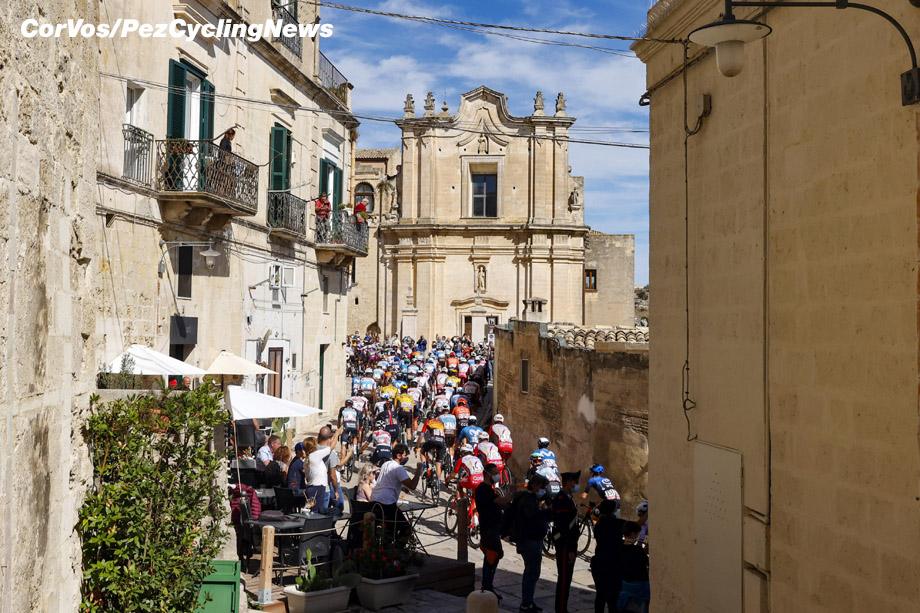 Nice place for a coffee stop

Thomas De Gendt, Simon Pellaud and Marco Fverslagi were part of the break, and not for the first time in this Giro, Josef Černý managed to go with them. Fabio Mazzucco tried to jump over to the leading group on his own, but could not make the crossing and was pulled back by the peloton. 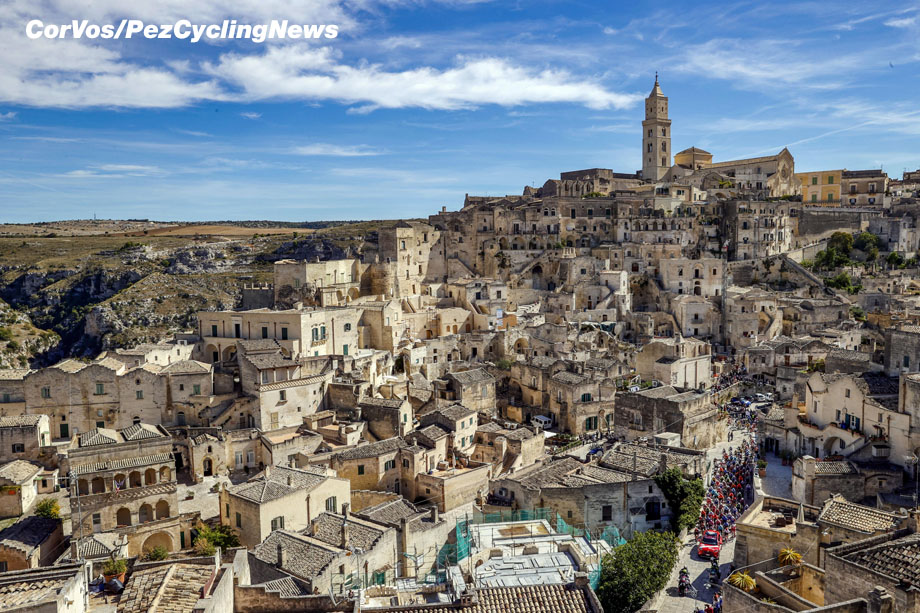 The peloton at the start of a windy day

After only 10 kilometres, the wind started make its mark on the race. Deceuninck – Quick-Step and Jumbo-Visma hit the front and the peloton was split into pieces. In addition, Pello Bilbao, second overall, Harm Vanhoucke (fourth), Domenico Pozzovivo (sixth), Jakob Fuglsang (seventh) and Rafał Majka (tenth) were in trouble. In the front echelon of thirty men, the pink jersey Almeida, Kelderman (third), Nibali (fifth) and Kruijswijk (eighth), were all safe. 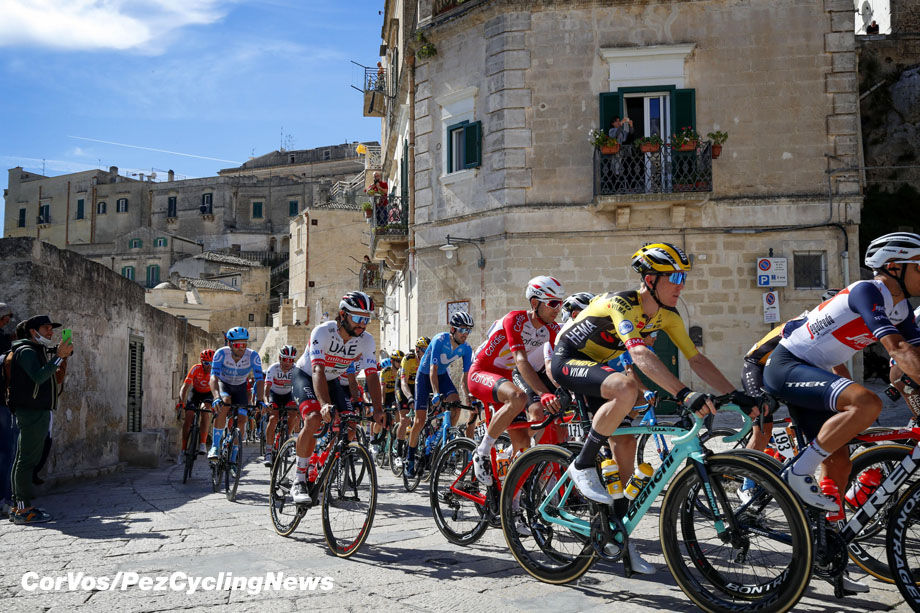 The sprinters Arnaud Démare, Peter Sagan, Michael Matthews and Elia Viviani had not missed the boat either. The echelons also marked the end for the leading group, which was caught after 24 kilometres. Behind; the second group was getting bigger and bigger as Bilbao, Fuglsang, Majka, and others, were able to return after 45 kilometres. A little later Vanhoucke, Pozzovivo and Simon Yates, who had fallen behind, also managed to rejoin. 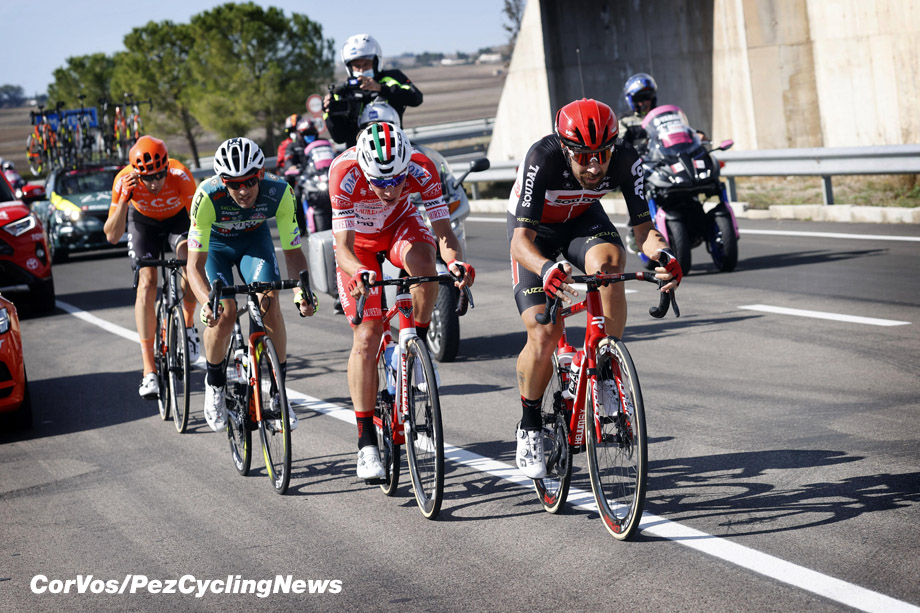 The failed early break of the day

The first escapees, Pellaud and Fverslagi, did not give up after they were caught and attacked again after 60 kilometres. The Swiss Androni rider and the Italian from Vini Zabù-KTM, initially got no more than 20 seconds from the peloton, which was slowed by a crash. Vanhoucke, Fuglsang and Jai Hindley were involved. 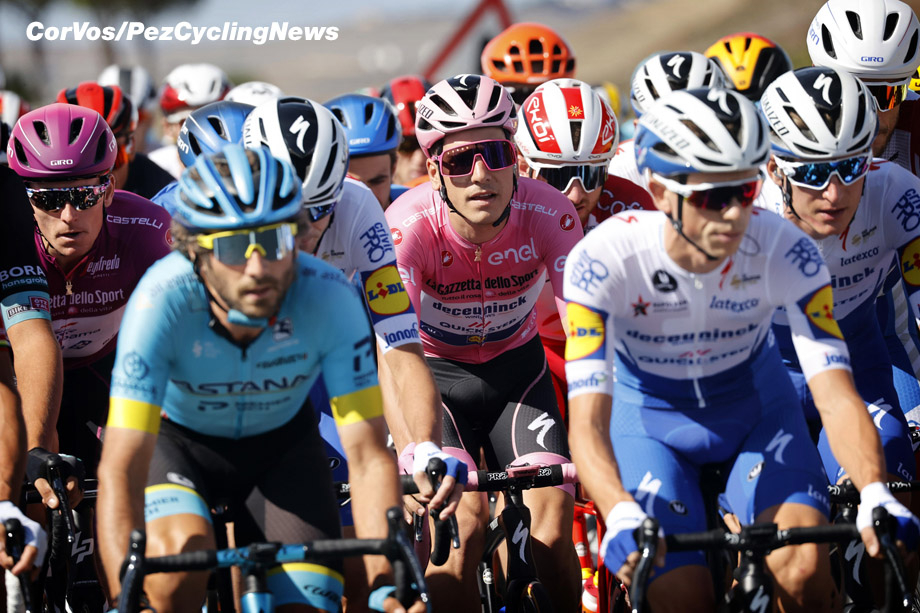 The escape attempt by Pellaud and Fverslagi was also doomed and after 86 kilometres the pair were again swallowed up by the peloton. The nervousness increased in the run-up to the intermediate sprint after 91.5 kilometres, Miles Scotson crashed when he touched the rear wheel of a teammate. The classification riders kept clear of the sprint for the bonuses. This allowed Manuele Boaro, Davide Ballerini and Kamil Gradek to pick up a few seconds. When leaving Grottaglie the race was in open countryside again. After 98 kilometres, there was another crash in the peloton. In the middle of the group a number of men came down, which delayed many riders. KOM, Filippo Ganna, Ilnur Zakarin and again Vanhoucke were involved. 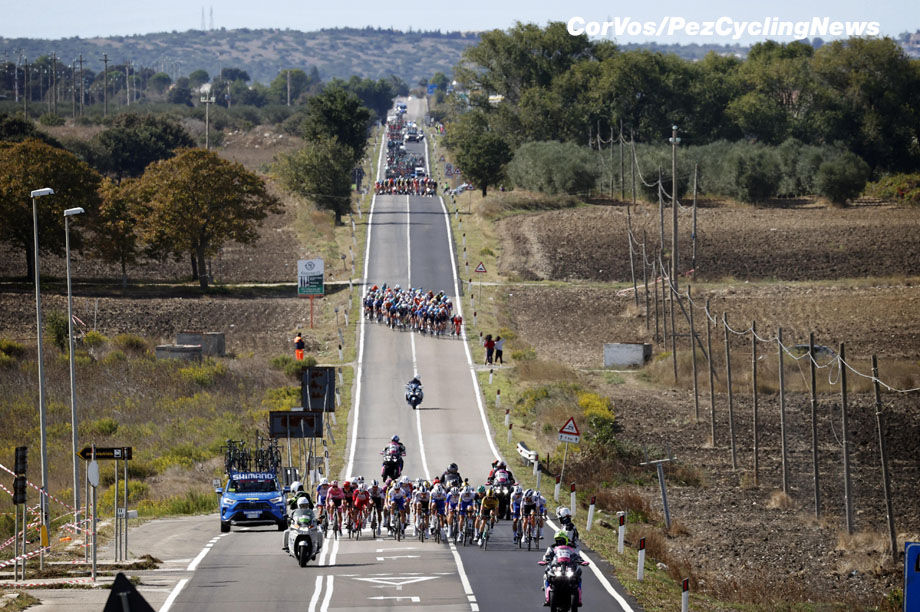 Echelons were on the menu for stage 7

The riders who had crashed were allowed to return, after which Iljo Keisse, teammate of the pink jersey Almeida, led the peloton into the final 20 kilometres. The teams of the sprinters also came forward, and it looked like the day would end like the previous stage, with a bunch sprint. Groupama-FDJ put their sprint train on the front for Arnaud Démare, who could win his third stage after successes in Villafranca Tirrena and Matera. 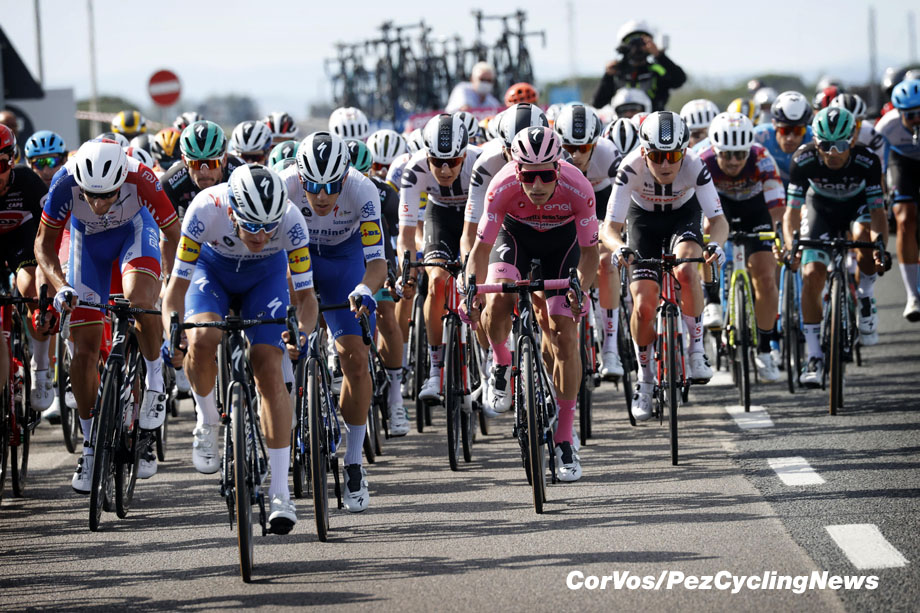 Almeida made sure he was at the front

In the port city of Brindisi, the teams of the GC riders stayed at the front of the peloton to keep out of trouble in the winding streets. Jumbo-Visma did a lot of lead work for leader Steven Kruijswijk, who was looking sharp. At the start of the last kilometre it was then up to the sprinters. Groupama-FDJ took over control again.

The French train drove up to the last five hundred metres on the front, while Peter Sagan became trapped. At 150 metres from the line, Démare jumped with Sagan on his wheel. The French sprinter took the right side, next to the barriers, leaving little room for the three-time World champion to come past. Sagan didn’t have any answer to the speed of Démare. The Frenchman was a good length ahead of the others, just like yesterday’s stage 6, to take his third stage victory of the 2020 Giro d’Italia. 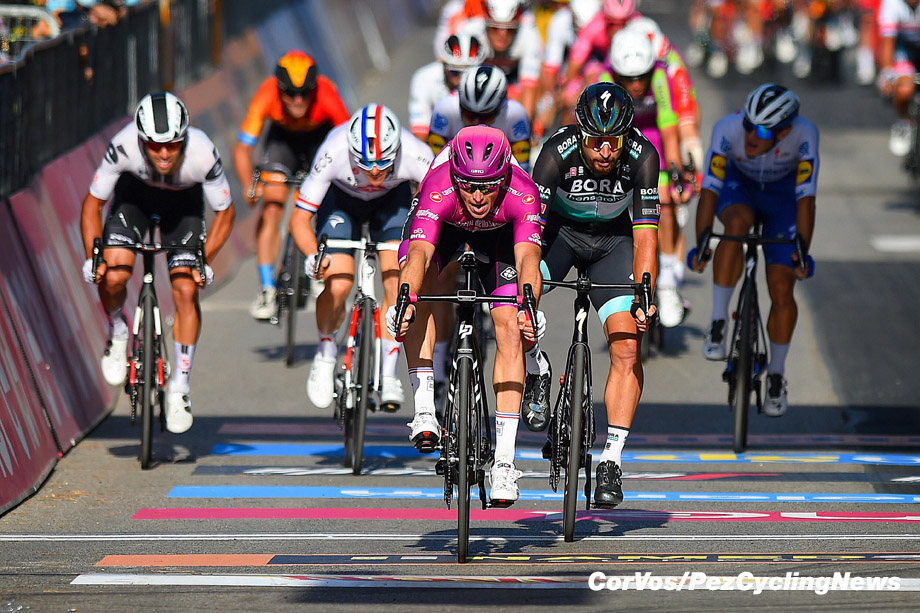 The best sprinter in the 2020 Giro d’Italia

Stage winner, Arnaud Démare (Groupama-FDJ): “My team-mates have made the difference even more than the great confidence I have these days. We had to exchange the positions of the lead out men in the finale. There was some elbow to elbow. With the three-quarter head wind to finish with, it wasn’t an easy task. I opened my sprint at a right time. I felt the presence of Peter Sagan close to me. I’m happy I made it again. It is extraordinary.” 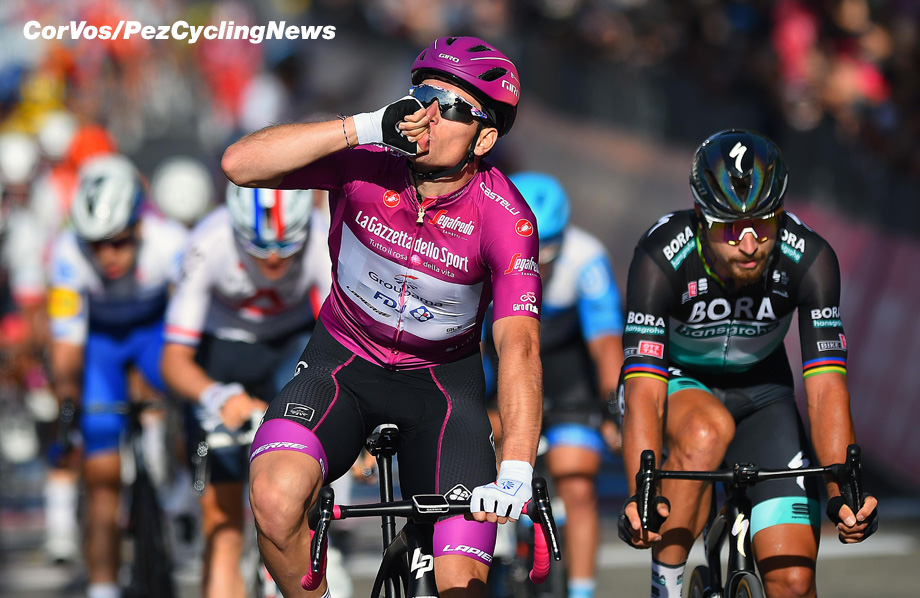 Maglia Rosa João Almeida (Deceuninck – Quick-Step): “Today we went very fast, especially in the final. In the last kms I stayed in the front of the peloton protected by my team-mates, they did a perfect job to protect me from the wind. The Maglia Rosa makes me stronger every day.”