Stage 8 Race Report: British rider, Alex Dowsett, took the Israel Start-Up Nation’s first Grand Tour stage win in Vieste on Saturday afternoon. Dowsett was a part of the ‘Break of the Day’ in-front of a peloton that had decided on a day off. The British time trial specialist attacked on the finish circuit from the group of six and solo’d to the line. Salvatore Puccio (INEOS Grenadiers) was second at 1:15, with Matthew Holmes (Lotto Soudal) and Joey Rosskopf (CCC) finishing on his wheel. João Almeida (Deceuninck – Quick-Step) had an easy ride to hold the overall lead. 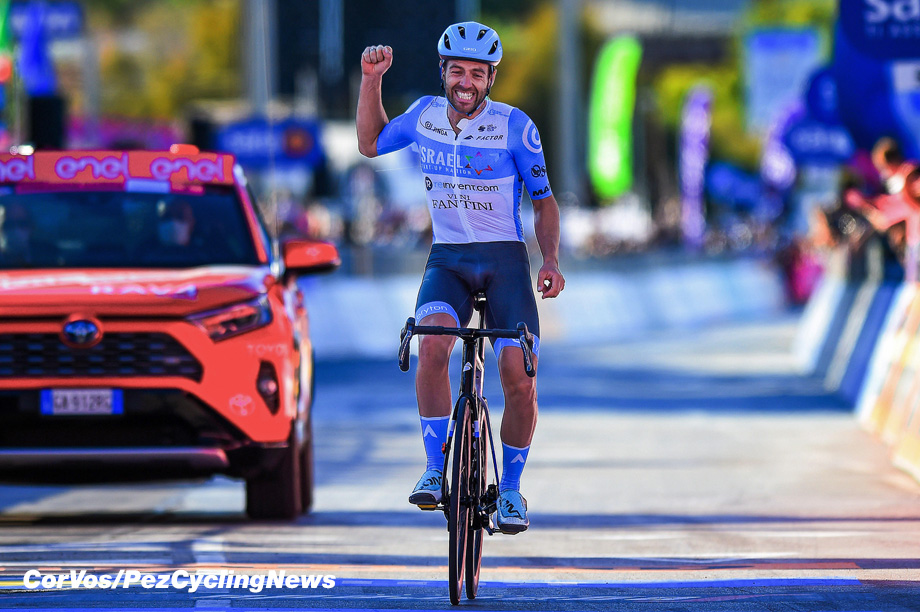 Alex Dowsett won the eighth stage of the Giro d’Italia. The 32-year-old Brit of the Israel Start-Up Nation team broke away from a group of six riders in the final and then soloed towards victory. 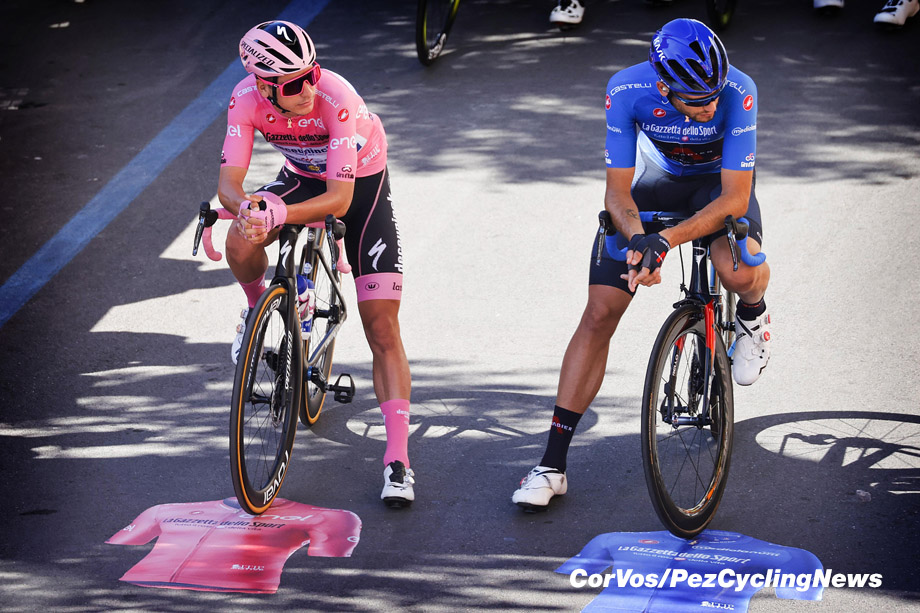 Pink and blue ready to go

Stage 8 – Giovinazzo-Vieste (Gargano) – 200km
The stage course combines a flat start and a challenging second half across the Gargano. From Giovinazzo to Manfredonia, the route unfolds on straight roads along the Adriatic coast. Past Manfredonia, the profile changes considerably as the route takes in the Monte Sant’Angelo climb, and then winds its way along the coastal road, following the constant undulations all the way to Vieste. 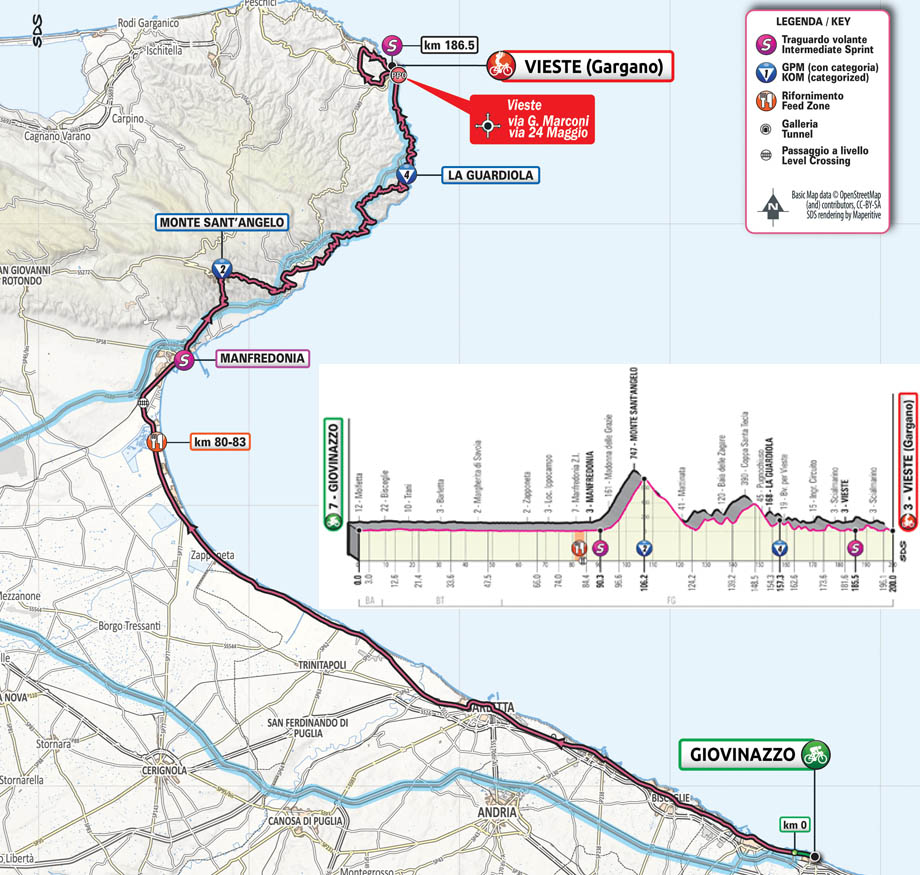 Final KMs
The closing circuit (14.5km) initially features a steep climb up Via Saragat (approximately 1km, peaking as high as 15-17%), followed by a long false-flat down, which leads back onto the coast. The route then levels out over the final 2km. The home straight (1,000m) is on 7.5m wide tarmac. 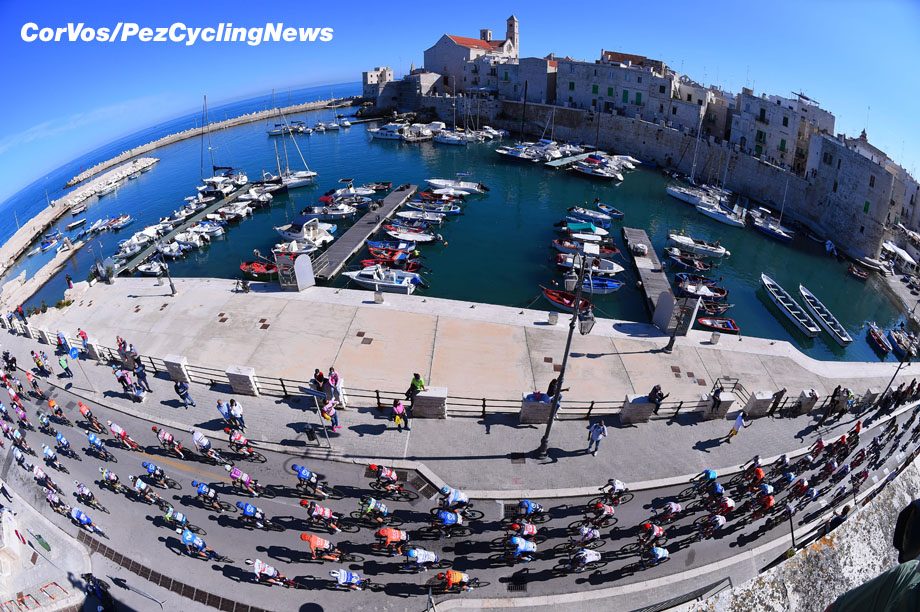 The start port of Giovinazzo

During the first hour of racing, a leading group of six riders was formed after about 30 kilometres. Simone Ravanelli (Androni Giocatolli-Sidermec), Joey Rosskopf (CCC), Alex Dowsett and Matthias Brändle (both Israel Start-Up Nation), Matthew Holmes (Lotto Soudal) and Salvatore Puccio (INEOS Grenadiers) were not chased by the lethargic peloton and built up a lead of more than 10 minutes. 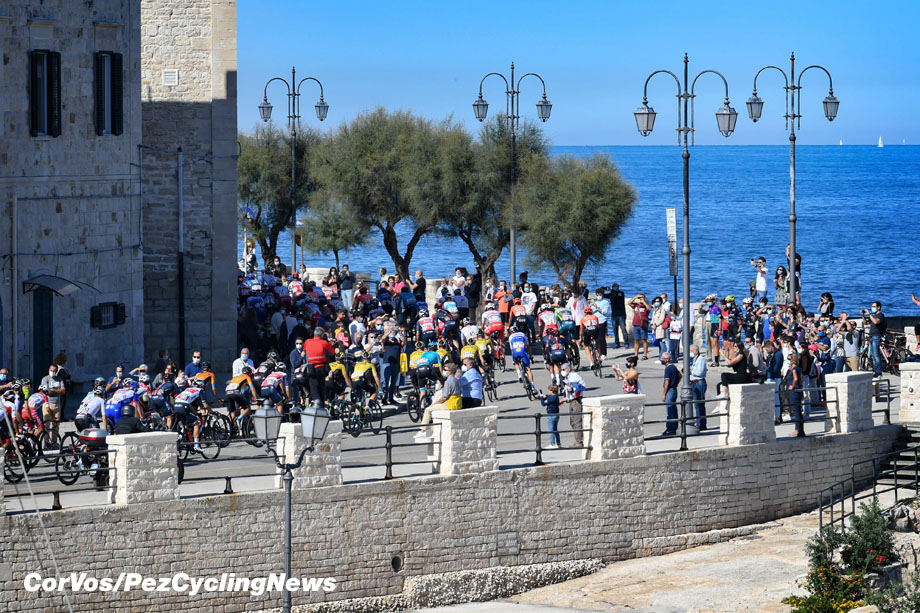 An easier day was on the menu

Holmes took the mountain points at the top of Monte Sant’Angelo. In the peloton, Fuglsang had a puncture, which forced him to chase. This was made more difficult for him, because Trek-Segafredo started to set the pace at the front of the peloton. 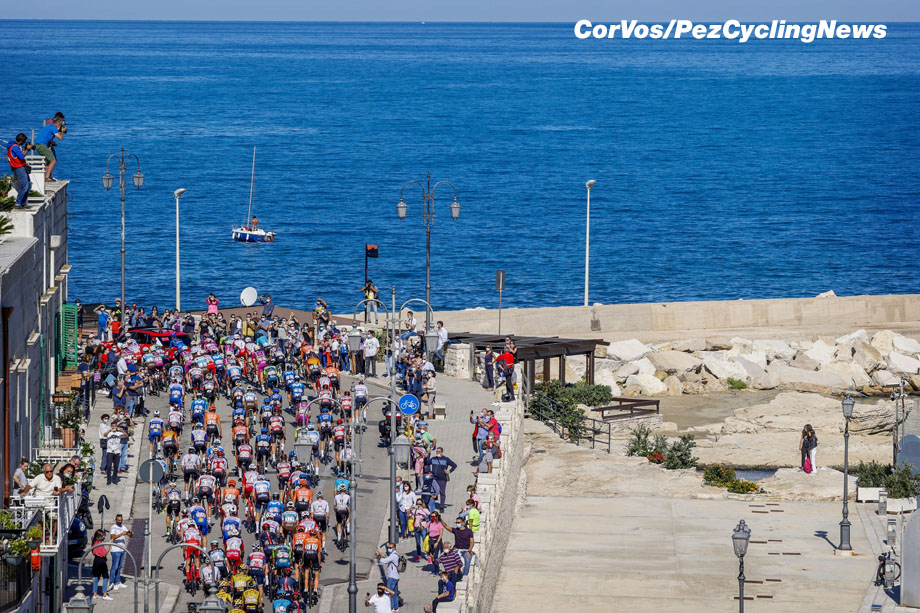 Nice ride up the coast

When Vincenzo Nibali’s team eased off after some time, Fuglsang managed to rejoin. The situation in the peloton settled down, after which Deceuninck – Quick-Step took control again. In the meantime it had become clear that the battle for the day’s victory would be between the escape riders. The lead increased again to more than 10 minutes. 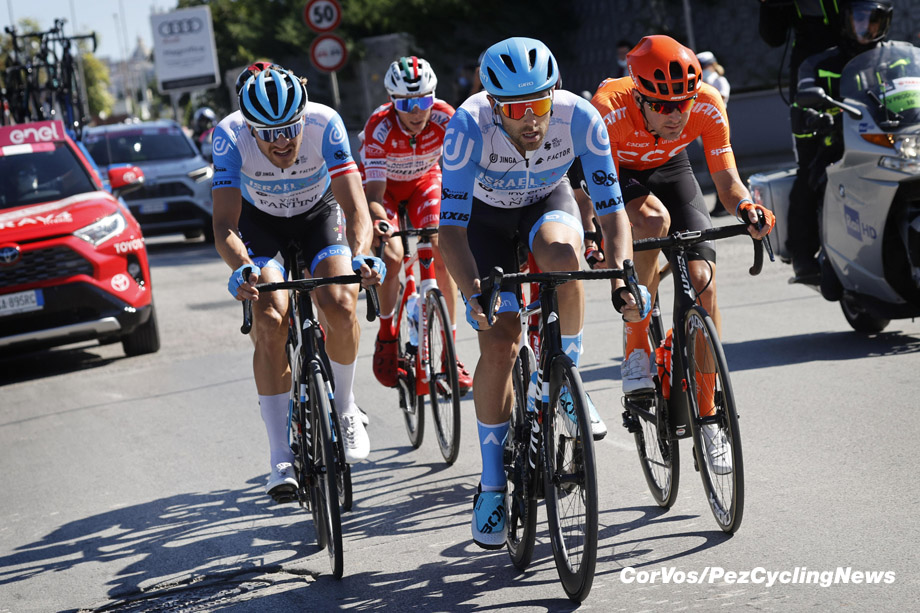 The final action was started 30 kilometres from the finish with an attack from Dowsett. The Briton did not manage to escape, but from that moment on the cohesion in the front group was a thing of the past. An acceleration by Puccio ensured that the leading group thinned out further. Initially, only Holmes could follow the Italian, but Rosskopf also managed to join a little later. Dowsett, Ravanelli and Brändle had to chase. 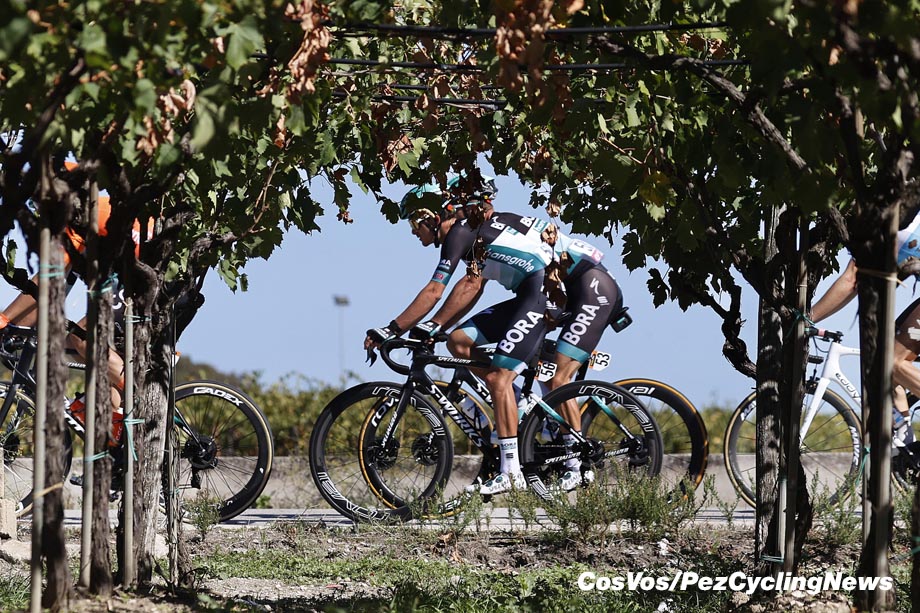 The two groups got back together, then Dowsett tried again. The chase for the Briton got off to a slow start, so Dowsett started the 14.5 kilometre final lap with a 33 second lead. 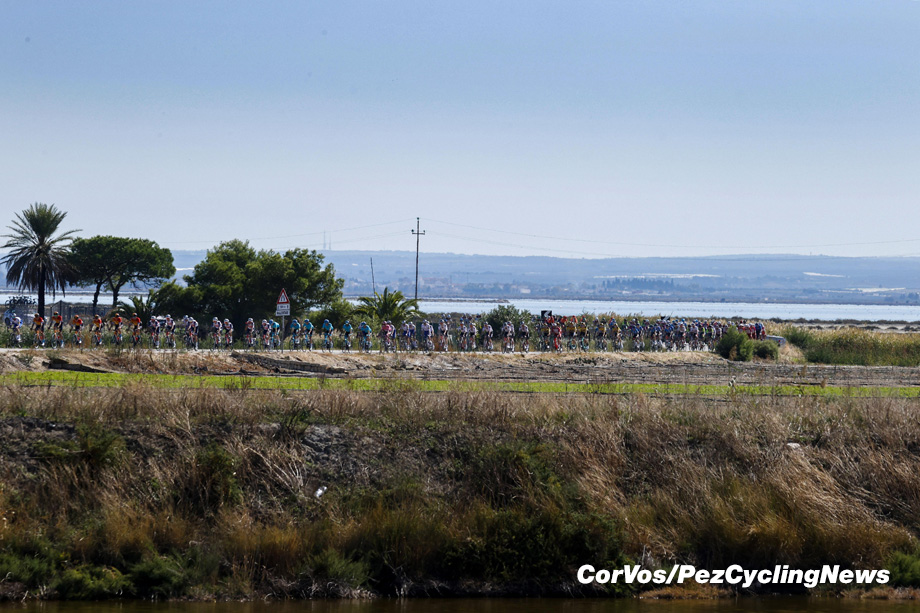 The peloton were not too interested in a chase

The ascent of La Chiesuola was going to be tough for the TT specialist. Dowsett reached the summit half a minute ahead of Puccio and Holmes. In the remaining 10 kilometres to the finish, Dowsett did not give up his lead and had time to celebrate his victory. 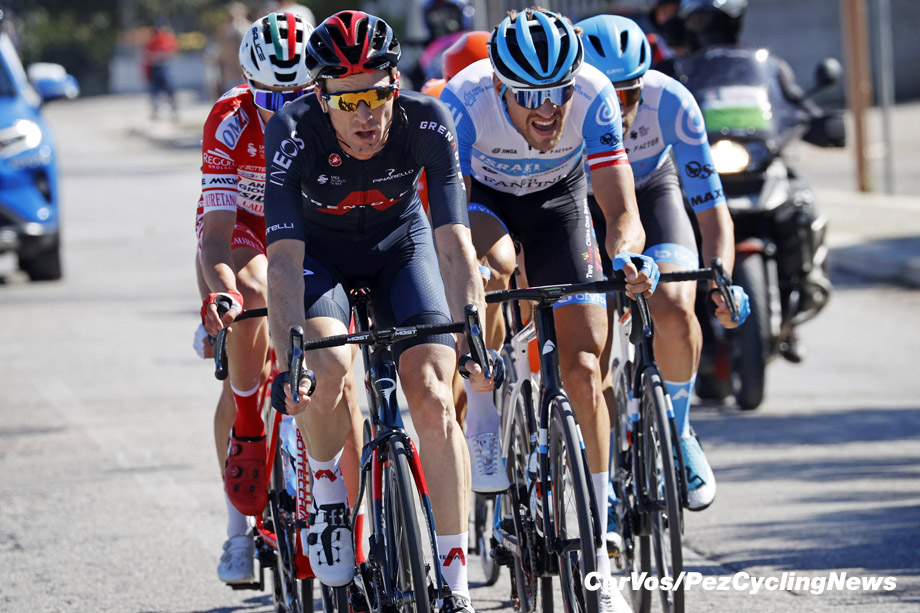 Seven years after his time trial victory in Saltara, Dowsett managed to win another Giro stage. Giving his Israel Start-Up Nation team their first victory in the WorldTour. 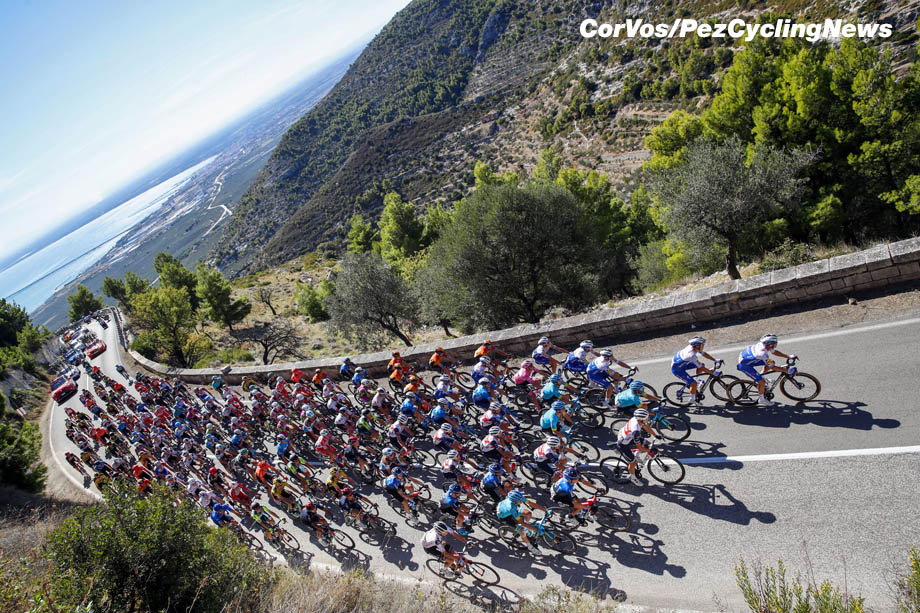 The day wasn’t all flat

Puccio won the sprint from the chasers and took second place. Holmes came in third, ahead of Rosskopf. The peloton finished after almost fourteen minutes. João Almeida remains in the lead of the general classification and will be in pink again tomorrow. 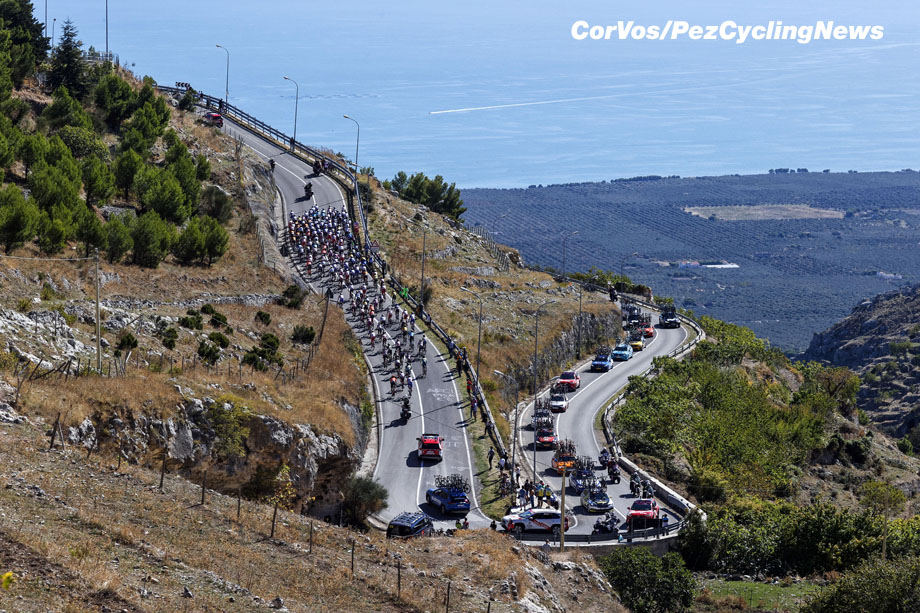 Monte Sant’Angelo was no battle ground

Stage winner, Alex Dowsett (Israel Start-Up Nation): “I don’t know what to say, I can’t say how much I needed a win like this in such a difficult year! I don’t have a contract yet for next year and with a baby coming in January, I really needed such a result so badly, I cannot believe it.” 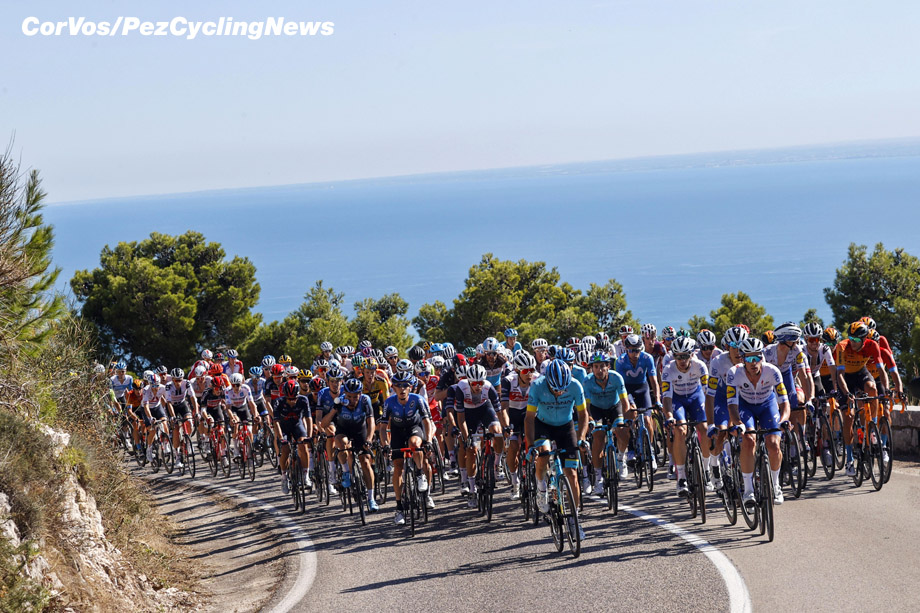 Maglia Rosa, João Almeida (Deceuninck – Quick-Step): “We are focussed on keeping the Maglia Rosa but we took it easy today. Tomorrow it will be harder, we will see if I can keep it after the stage.” 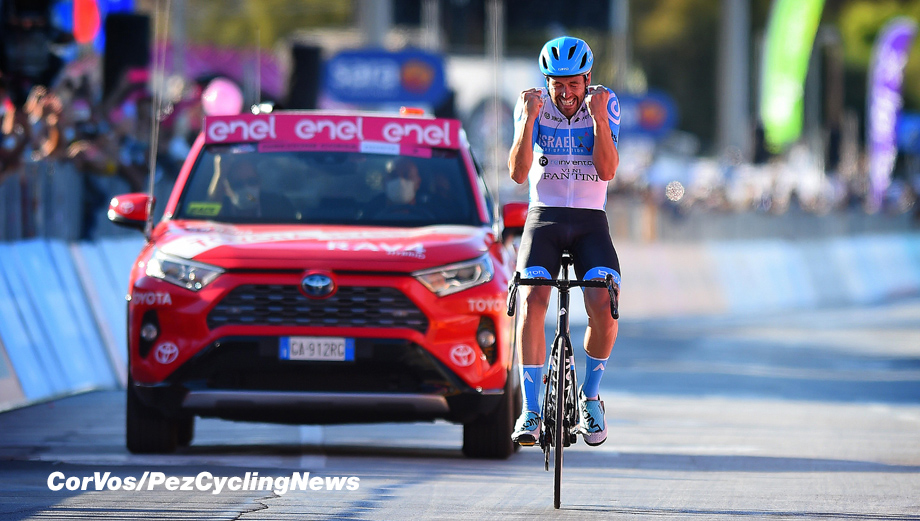 Big win for Alex Dowsett – Maybe a contract for 2021 now?

Simon Yates had to withdraw from the Giro d’Italia due to testing positive for the corona virus. Yates developed very mild symptoms on Friday evening, after the seventh stage to Brindisi. During the routine temperature checks, which are performed three times a day during the Giro d’Italia, he had a slight increase. According to the protocols, the British rider was immediately isolated in his room. Subsequently, the Mitchelton-Scott medical team asked for a rapid test, which gave a positive result. A second, real-time PCR test was performed later, which confirmed the positive result. During the quarantine period, the rider, who was 21st on GC after seven days, will be transported by a specially arranged ambulance.

The other riders and staff members of the Australian team have also undergone a rapid test. Each gave a negative result. The remaining riders have received permission from the Giro organization to continue the race and will be tested further in the coming days, as a precaution.

“Simon’s health remains our main concern and fortunately his symptoms remain very mild and he is otherwise in good health,” team doctor Matteo Beltemacchi said. “We would like to thank organiser RCS for all the support in arranging the quick tests and appropriate transport.”

# Stay PEZ for Giro stage 9 and Gent-Wevelgem on Sunday. #