By Alastair Hamilton On Oct 11, 2020
Share
Like PEZ? Why not subscribe to our weekly newsletter to receive updates and reminders on what's cool in road cycling?

Stage 9 Race Report: Ruben Guerreiro (EF Pro Cycling) out-sprinted his escape partner, Jonathan Castroviejo (INEOS Grenadiers) at the end of a tough stage 9. The stage could have been a GC battle, but the ‘Break of the Day’ went all the way to the finish for a Portuguese win. Another man from Portugal, João Almeida (Deceuninck – Quick Step) held the overall lead going into the first Giro rest day. 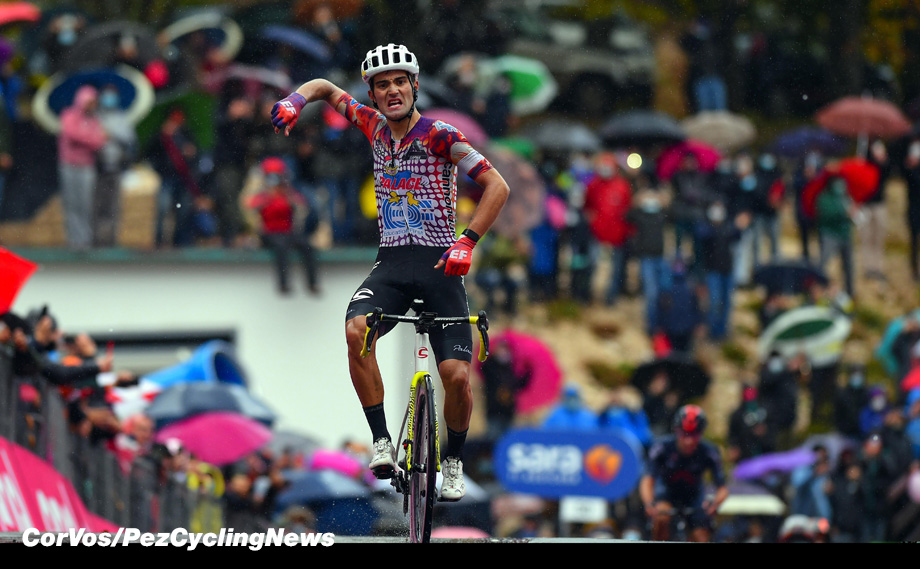 Ruben Guerreiro put the ninth stage of the Giro d’Italia on his palmarès. In Roccaraso he beat Jonathan Castroviejo who he had jumped away with from the early break. 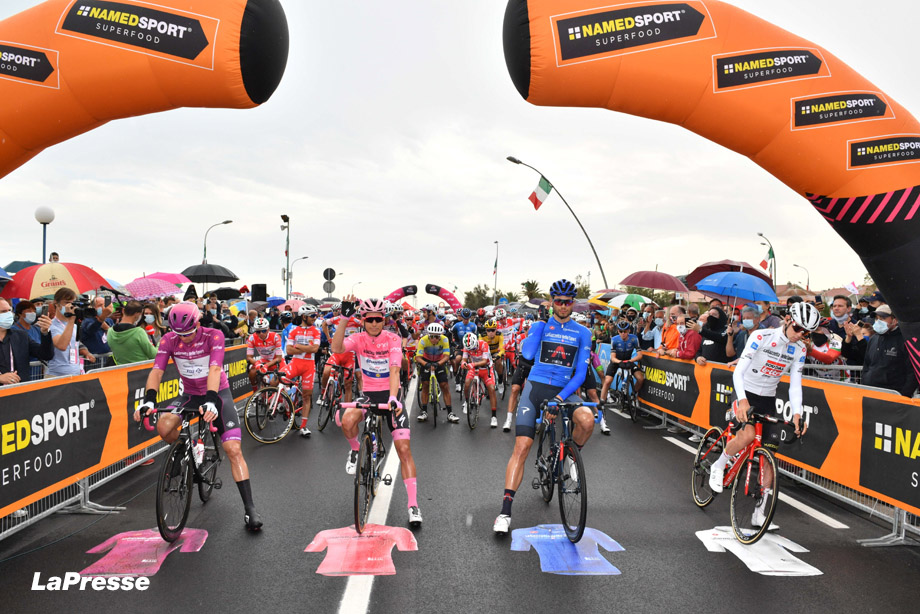 The jersey’s line up in San Salvo – Changes were expected

Stage 9 – San Salvo-Roccaraso (Aremogna) – 208km
This is the queen stage across the Apennines, with a remarkable vertical altitude gain (over 4,000m). After briefly skirting the Adriatic coast, the route heads inland, undulating continuously all the way to Guardiagrele, and then takes in long, consecutive climbs up Passo Lanciano, Passo di San Leonardo and Bosco di Sant’Antonio, with two-figure gradients over the first ascent. Past Pescocostanzo and Rivisondoli, the route reaches the foot of the closing climb in Roccaraso. 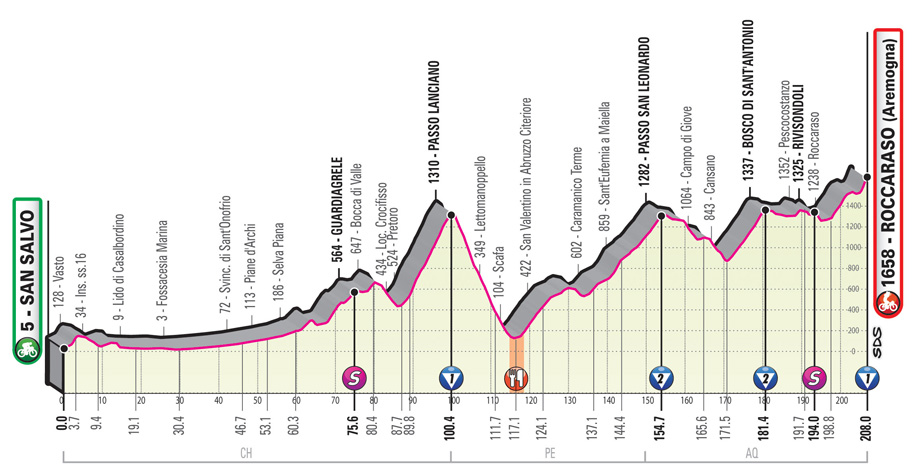 Final KMs
The closing climb is nearly 10km long, with an average 5.7% gradient. The ascent is manageable in the first part, and is followed by a false-flat down. The last 2km rise at a 7% gradient, topping out at 12% over the final kilometre. The stage finish is on 6m wide tarmac. 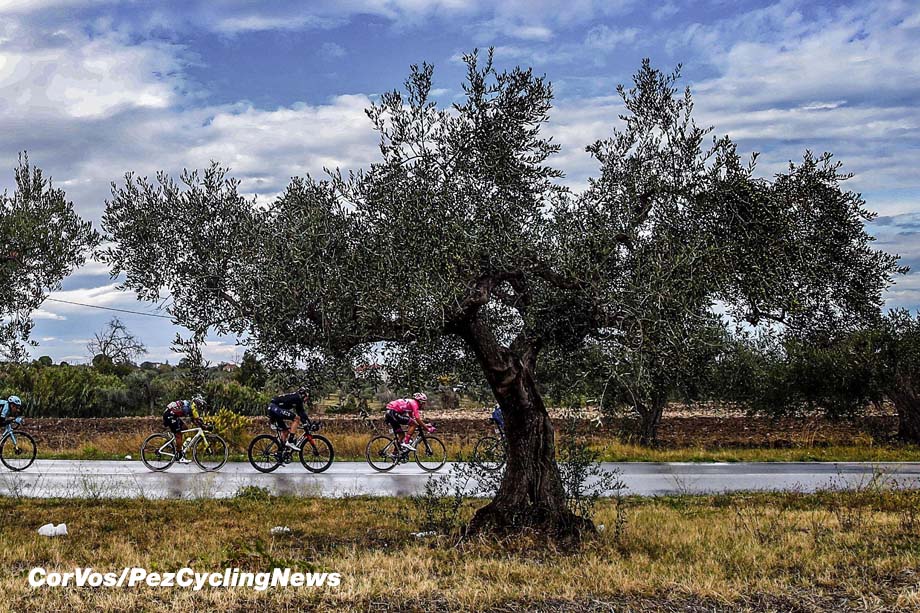 The battle for the early break started immediately. The blue KOM jersey, Filippo Ganna, wanted to be up front in the rainy weather, as there were 116 points to be earned on he stage. Attacks followed each other in rapid succession, until after 75 kilometres Ruben Guerreiro (EF Pro Cycling), Eduardo Sepúlveda (Movistar), Ben O’Connor (NTT) and Jonathan Castroviejo (INEOS Grenadiers) took the lead. 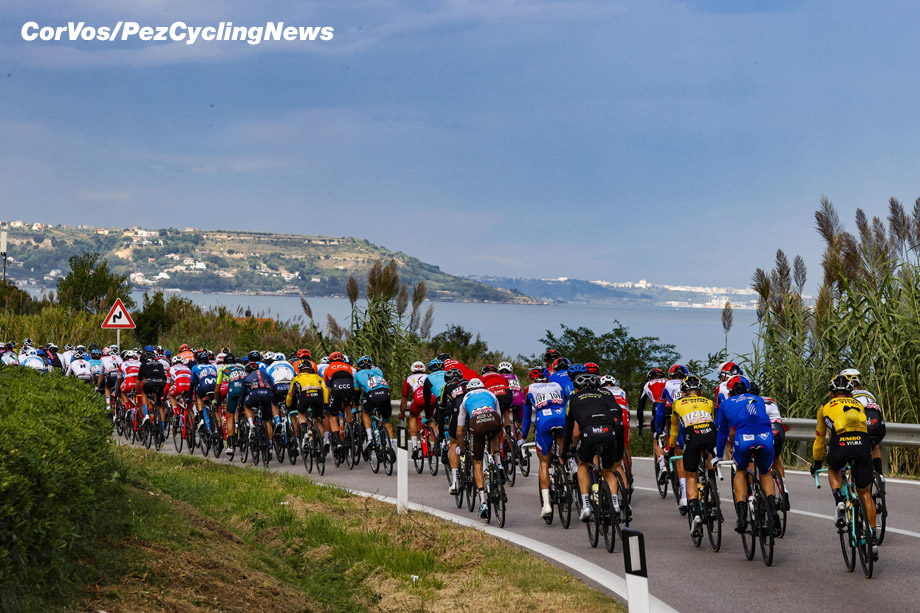 Up the coast and then some climbing

As the weather was getting drier, the foursome passed the intermediate sprint in Guardiagrele. The leading group was not yet complete, Larry Warbasse (AG2R-L a Mondiale), Kilian Frankiny (Groupama-FDJ) and Giovanni Visconti (Vini Zabù-KTM) managed to cross. On the Passo Lanciano, their lead had increased to more than 6 minutes. Visconti was the first over the top, overtaking Ganna in the mountains classification. 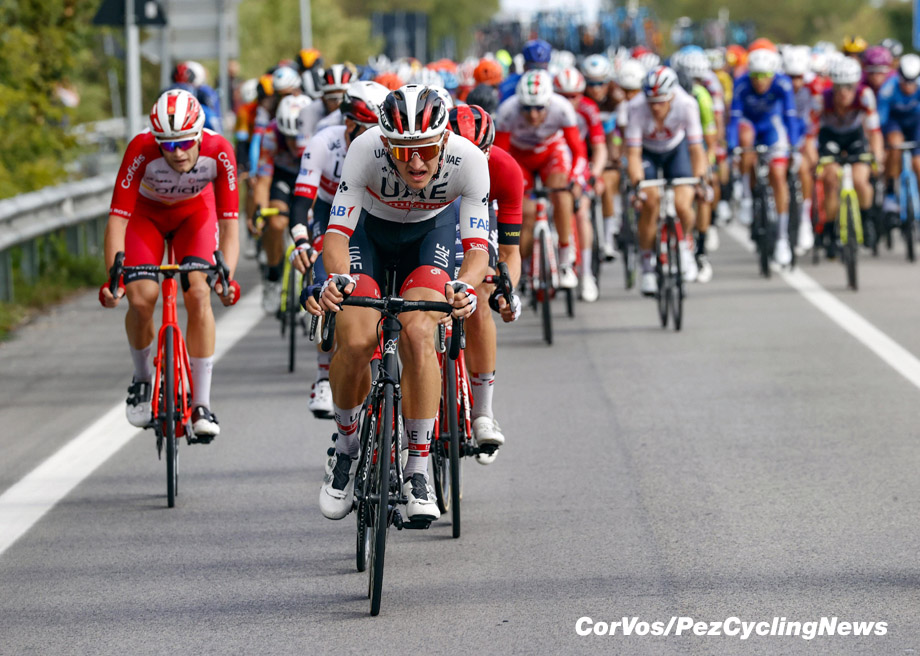 Mikkel Bjerg on the attack

After 121 kilometres, Mikkel Bjerg also joined the breakaway. The young UAE Emirates rider, three-time U23 World time trial champion, did so after a chase of 30 kilometres, to close a 5 minute gap on his own. It was not the first time that the Dane was part of a breakaway, he was off the front in the stage to Etna. 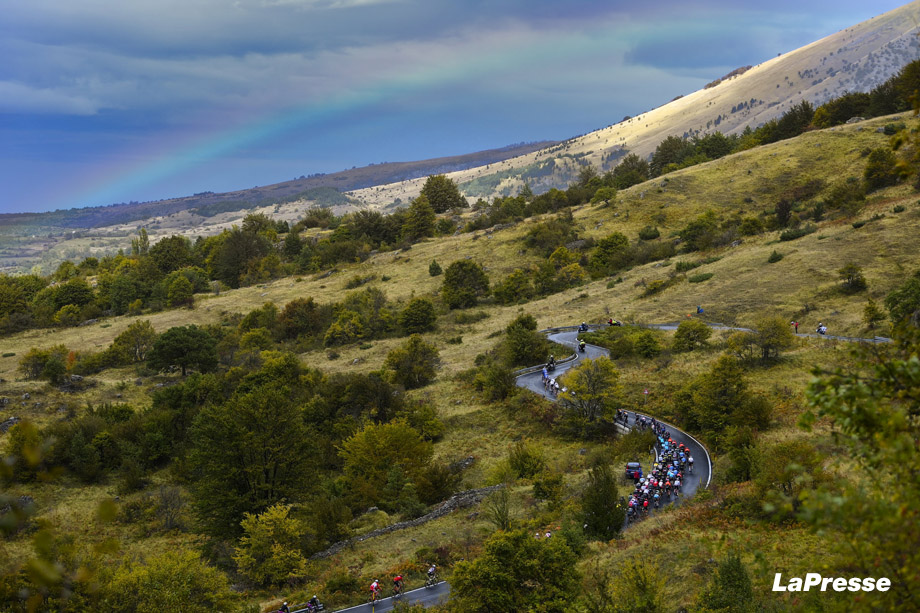 Not the best of weather for stage 9

The Passo San Leonardo was next, on the climb of nearly 14 kilometres it started to rain again. After 154.7 kilometres, the leading group crossed the summit with a lead of almost 7 minutes, Visconti again took the most mountain points, increasing his total to 76 points. After a descent of 17 kilometres, the eight escapees started the penultimate climb. 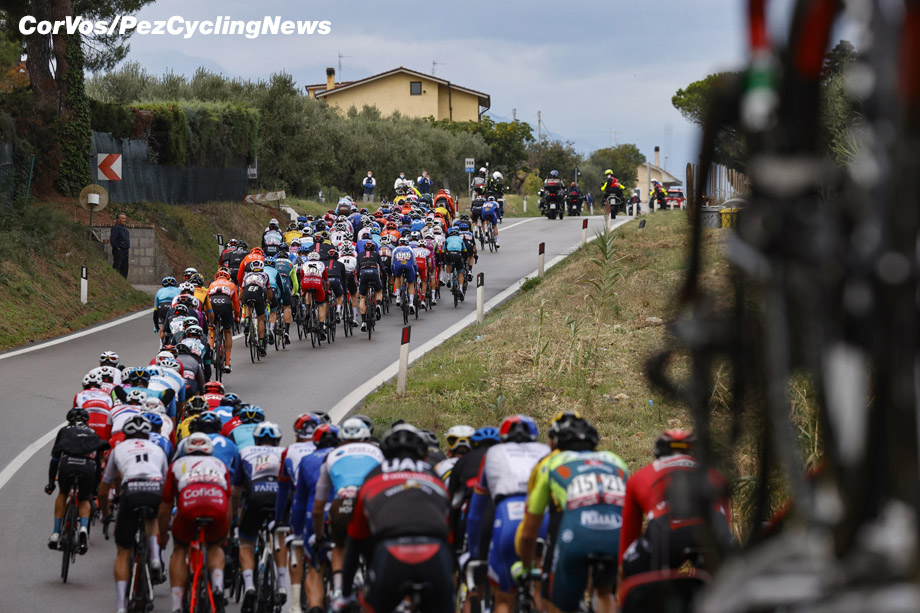 The peloton was split to pieces

In the run-up to the Bosco di Sant’Antonio, the peloton had reduced the difference to 4 minutes. On the climb the break split and Warbasse, Guerreiro, Frankiny, Castroviejo and Bjerg pushed on. In the peloton, Vincenzo Nibali had his Trek-Segafredo teammates increase the pace, which meant that many riders were in trouble. The Shark of Messina seemed to have his sights set on the pink jersey. 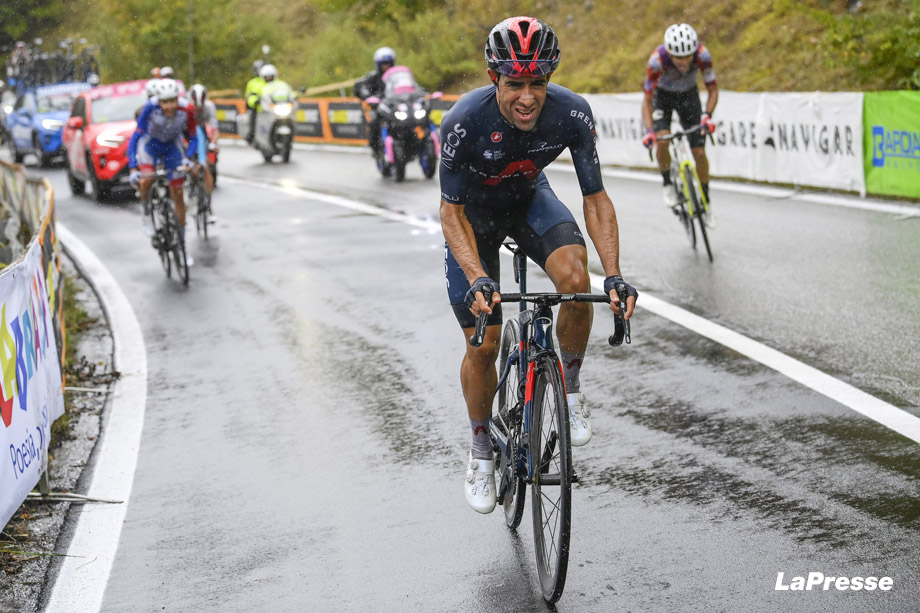 Castroviejo was strong, but not fast enough at the finish

Nevertheless, Nibali took his men off the front as the group was still quite large, after which Deceuninck – Quick-Step took control again. Despite the easing of the speed in the peloton, the five in the break continued to work together and had 3:30 at the top of the penultimate climb, 26.6 kilometres from the finish. 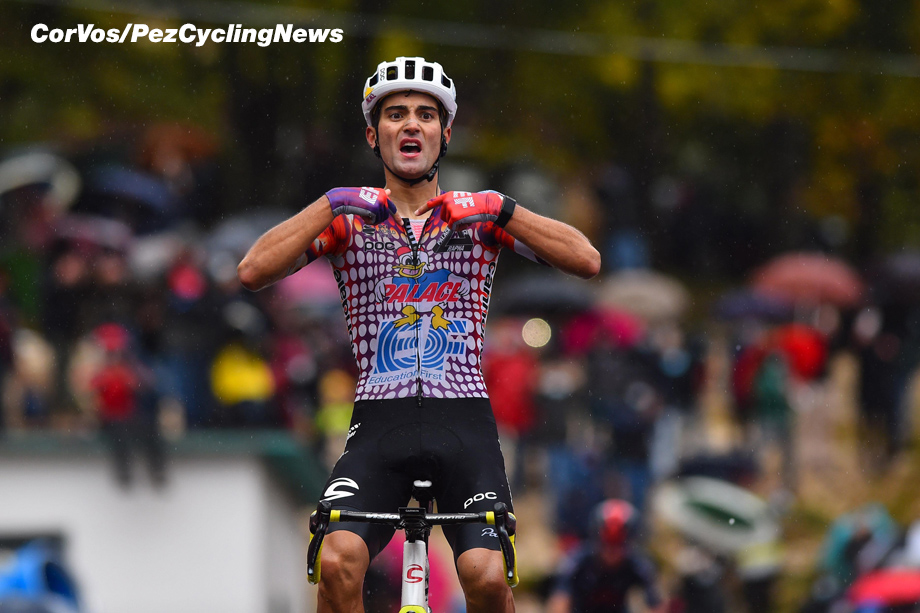 At 14 kilometres from the finish, the escape picked up the bonuses at the intermediate sprint; from then on it was a countdown to the base of the final climb. In the run-up, the teammates of Wilco Kelderman, third on the classification, and Steven Kruijswijk (eighth) also came forward and the other classification riders were ready. With the leading group 3 minutes ahead, the race could prepare for a battle on two fronts. 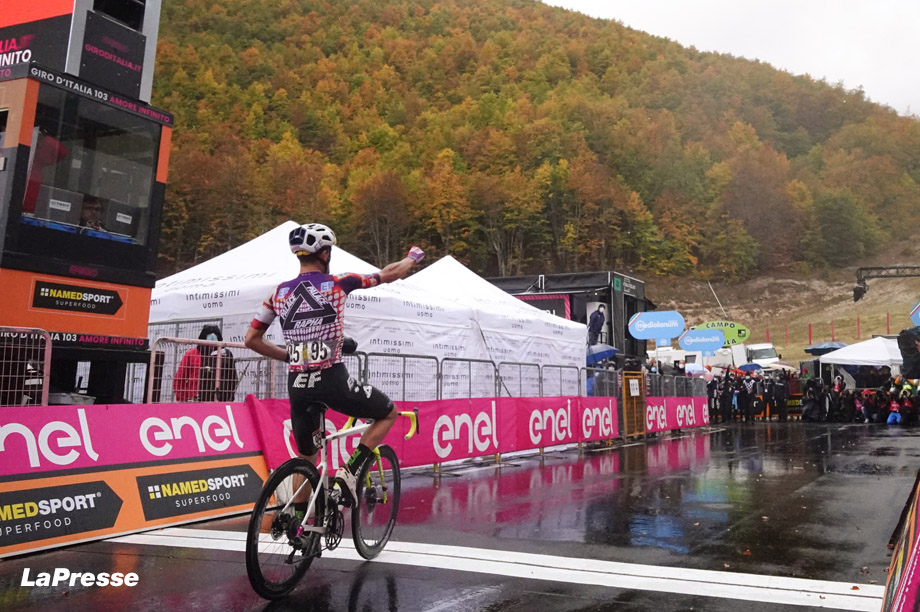 In the last 6.5 kilometres, Warbasse opened the action in the leading group, but the others were immediately on his wheel. Then there was some more power behind Castroviejo’s attack, Guerreiro managed to connect. From the peloton, Lucas Hamilton, seventh overall, and Tao Geoghegan Hart (19th) accelerated. 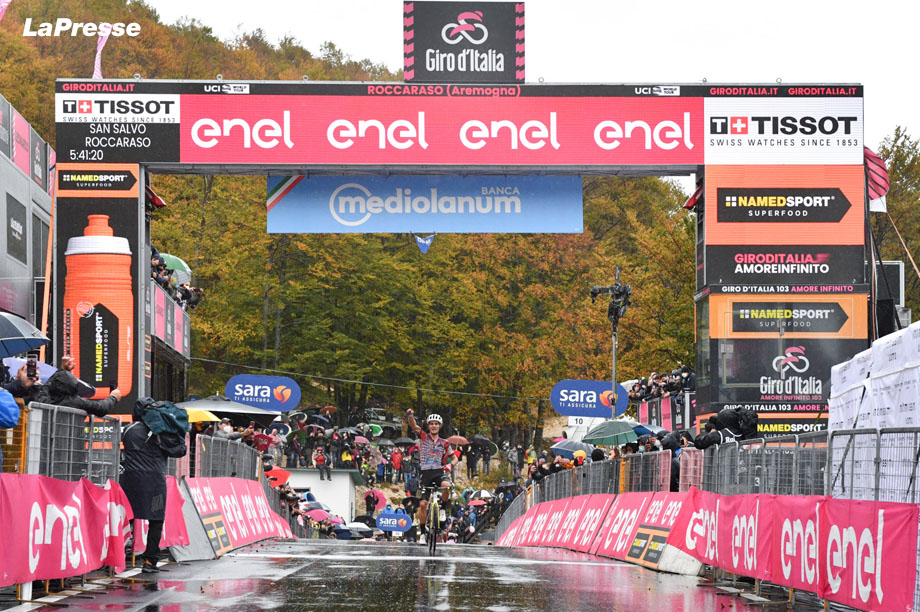 Castroviejo and Guerreiro prevented the others from returning and then got ready for a long sprint on the steep last kilometre, with stretches of up to 12%. The Portuguese rider turned out to be the better of the two, giving his EF Pro Cycling team the second victory of this Giro, after Jonathan Klever Caicedo won the third stage to the Etna volcano six days ago. Guerreiro also added the blue KOM jersey to his success of the day. 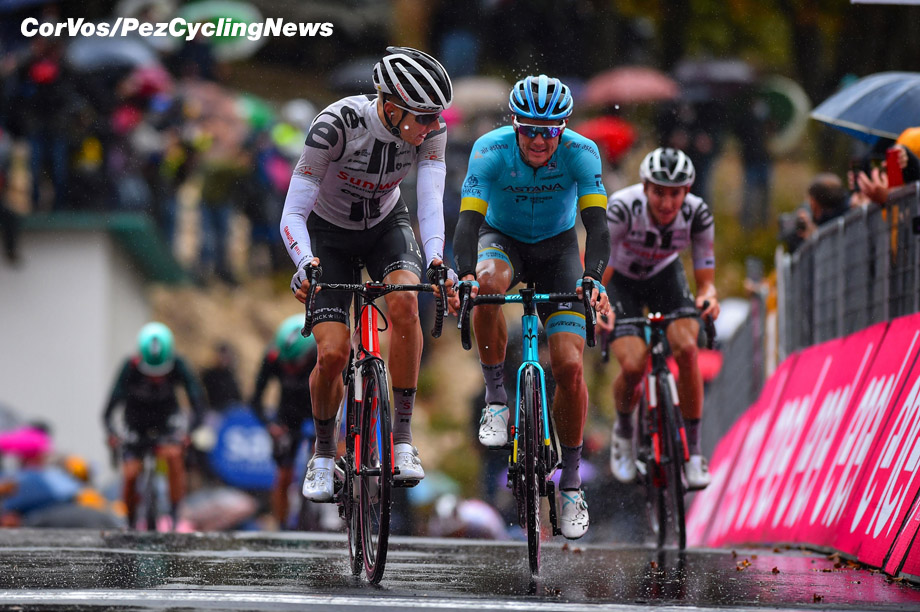 Wilco Kelderman, Jakob Fuglsang and Jai Hindley were the strongest of the classification riders. In the steep final section they took precious seconds on João Almeida, who kept the pink, Pello Bilbao and Vincenzo Nibali. Kelderman moved to second place on the overall at the expense of Bilbao, the Spaniard is now third. Domenico Pozzovivo is now fourth. 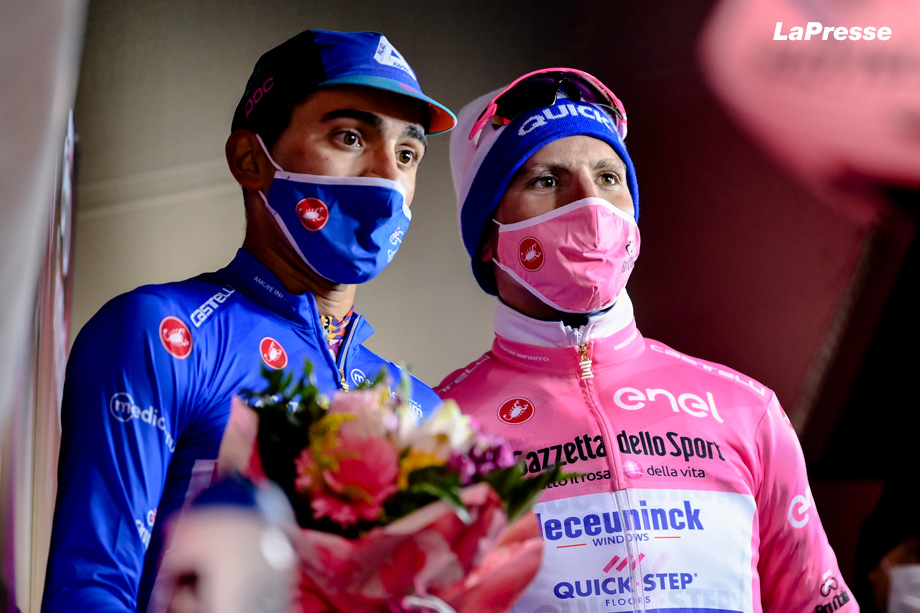 KOM and overall – A Portuguese podium

Stage winner, Ruben Guerreiro (EF Pro Cycling): “Finally, what a great satisfaction after so many second places! The team and I really deserved this victory. It was very difficult to get into the breakaway this morning and it’s extraordinary to win today.” 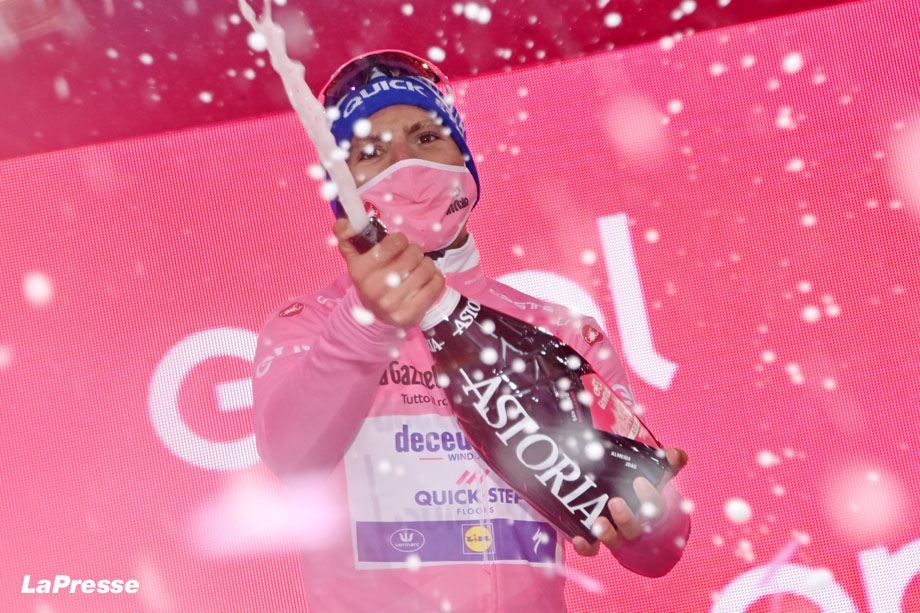 Maglia Rosa, João Almeida (Deceuninck – Quick-Step): “The team did an incredible job, they were perfect and it is thanks to my team-mates that now I still wear the Maglia Rosa. I’m also happy for my compatriot Guerreiro, he deserves the win!”