Giro d’Italia stage 5: The little Australian, Caleb Ewan (Lotto Soudal), won a crazy technical finish to stage 5 in Cattolica. He weaved his way through the final traffic jam to shoot his front wheel across the line ahead of the unlucky Giacomo Nizzolo. Ewan was in a class of his own in the last metres. Alessandro De Marchi held the overall lead. 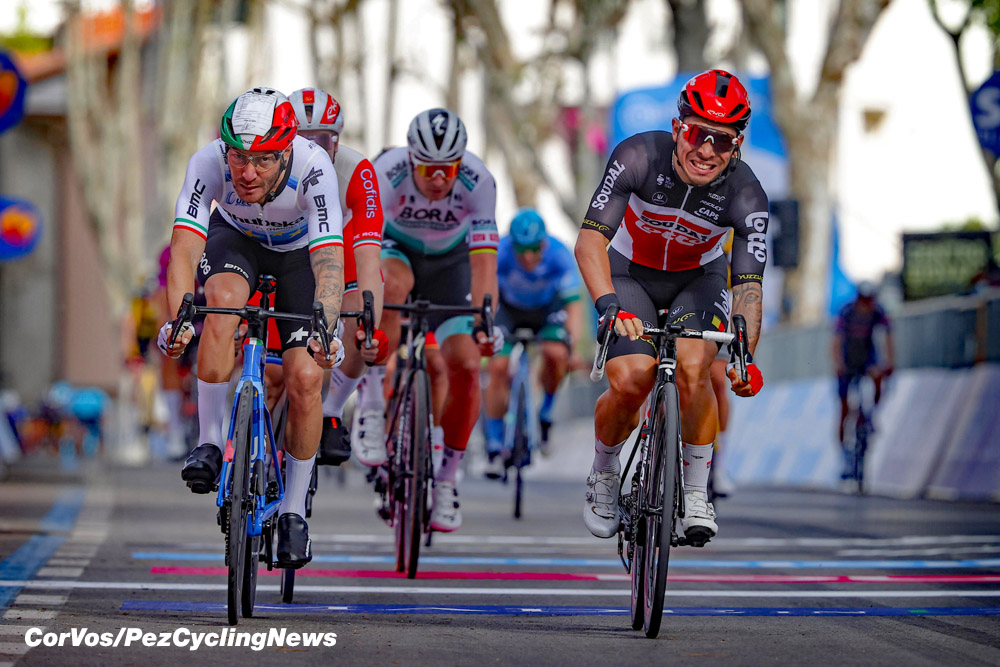 Ewan made it look easy

Caleb Ewan has put the fifth stage of the Giro d’Italia in his palmarès today. In Cattolica he was the fastest in the bunch sprint. There was yet another second place for Giacomo Nizzolo and third for Elia Viviani. Pavel Sivakov and Mikel Landa had bad crashes on the run in to the finish. 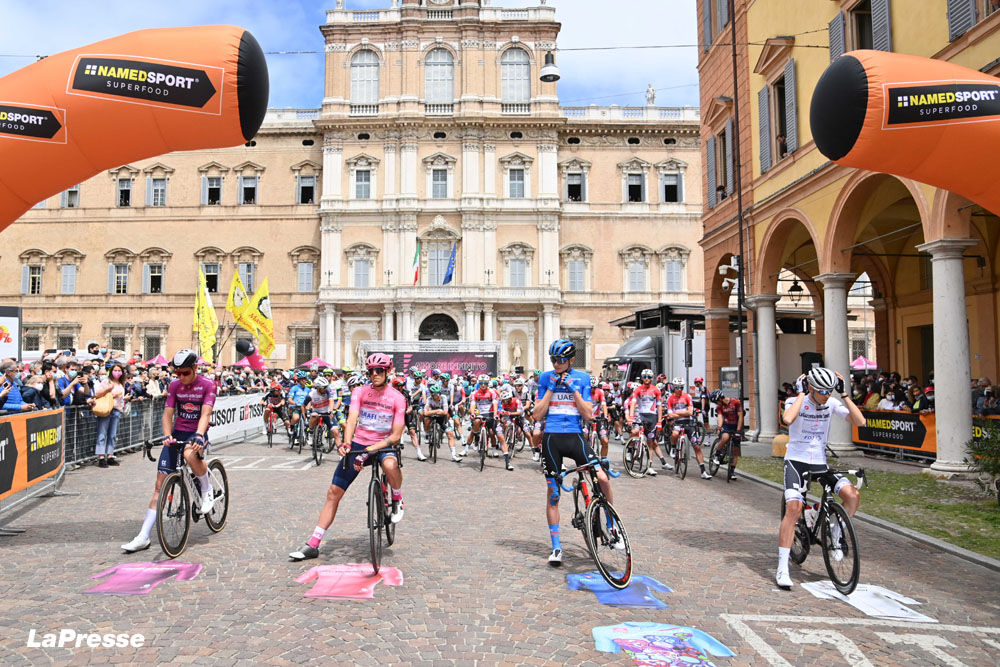 No cold rain today in Modena

Giro stage 5 route: A pan-flat stage running almost entirely along the ss. 9 Via Emilia, on straight and mostly wide roads. As the stage passes through several urban areas, roundabouts, traffic islands and street furniture will be found along the route. The final kilometres are raced on city roads. A brace of roundabouts and bends, 3 left-handers and one right-hander, leads into the home straight, approx. 900m. 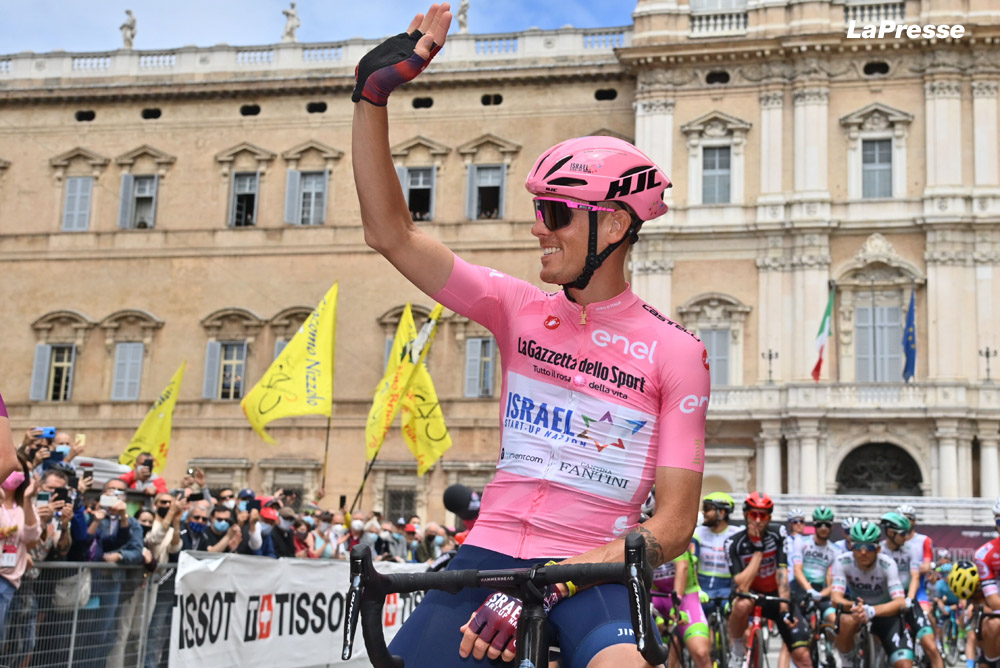 Stage 5 from Modena in the Po Valley to the Adriatic resort of Cattolica was as flat as flat can be. Three days after Tim Merlier’s sprint success in Novara, there was another chance for a bunch sprint. However, the wind could play its part on the straight route to the sea. There is also a lot of twists and turns in the last 3 kilometres. 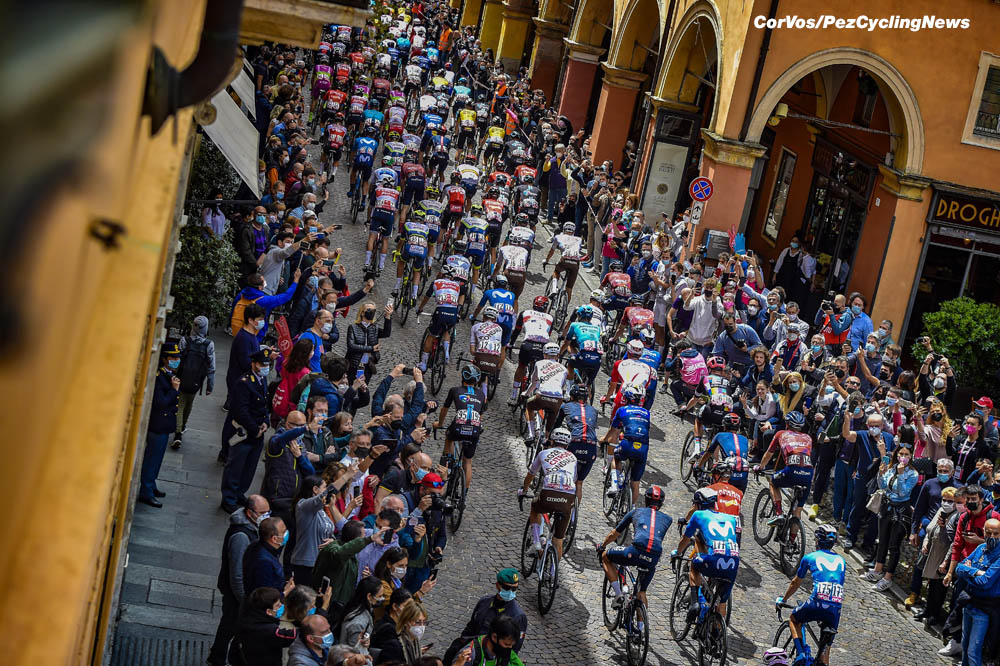 The peloton rolls out of Modena for a very flat stage

After the rain of stage 4, the fifth stage started under sunny skies and the wind wasn’t hard enough to cause any problems at first. From the start, Androni’s Filippo Tagliani attacked and Umberto Marengo (Bardiani-CSF-Faizanè) jumped on his wheel. Behind them the peloton was not too interested. 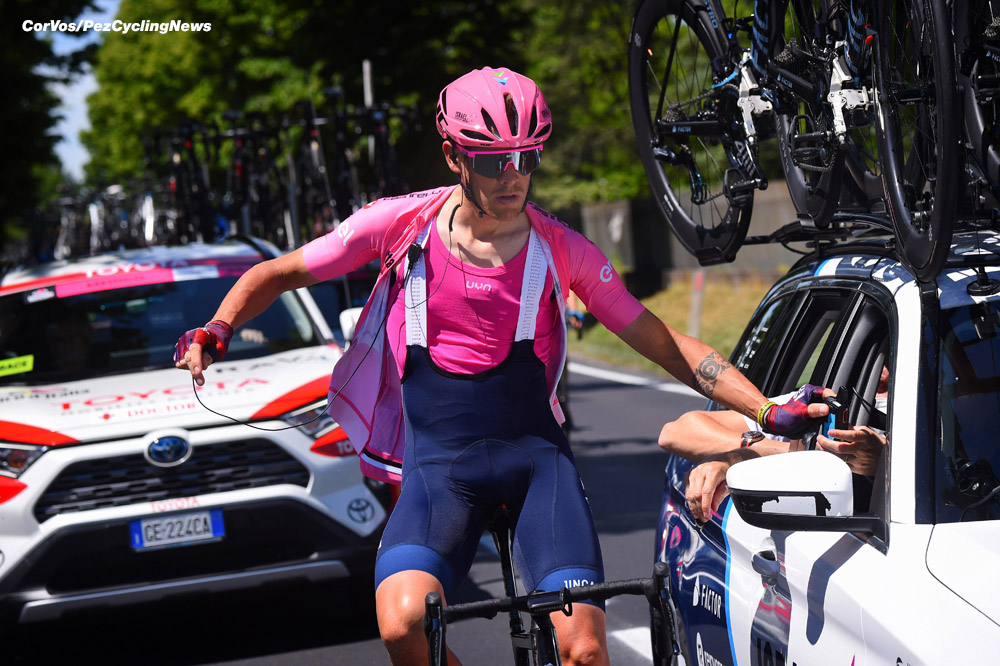 Radio problems for the race leader

Tagliani and Marengo were on the attack on the second day, riding for 150 kilometres ahead of the peloton. Yesterday Tagliani was again in the leading group after 41 kilometres with eleven men. Today they were the only escapees, which was easy to control for the five or six sprinter teams. 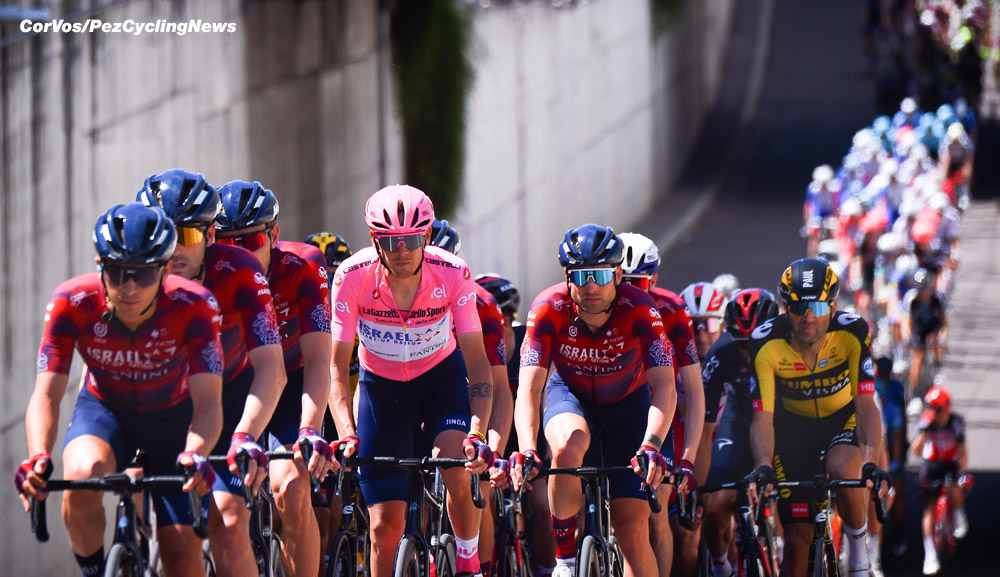 The Israel Start up Nation team did the early work

The leading duo took a lead of 5 minutes, which initially remained stable. But as they got closer to Imola, the nervousness and speed suddenly increased sharply in the peloton. In the city of Formula 1 races, there was an intermediate sprint. Tagliani beat Marengo, while behind them in the peloton Gaviria was ahead of Viviani, Merlier, Sagan, Nizzolo and Pasqualon. 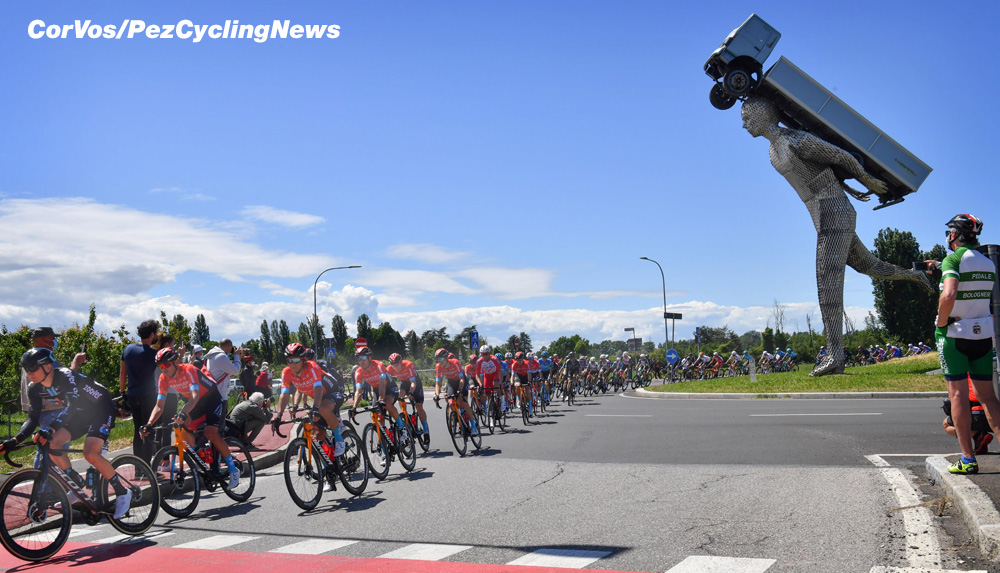 There was some early entertainment

With 107 kilometres to go, the two escapees were caught. The teams of the GC riders came to the front in order not to be surprised in the finalé by echelons due to the changing wind conditions. With 68 kilometres to go, Simon Pellaud jumped from the peloton and Davide Gabburo went with him, and the race again got two escapees from Androni Giocattoli-Sidermec and Bardiani-CSF. The peloton left them to it and took the opportunity for a bathroom break. Pellaud had already been on the attack on Monday, the stage that was won by Taco van der Hoorn. 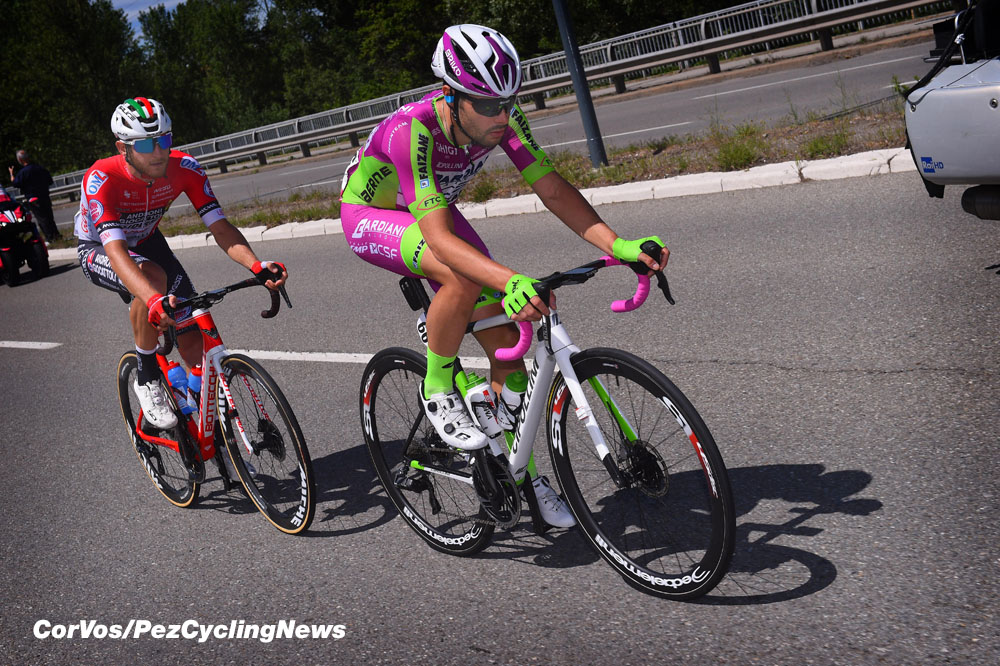 Tagliani and Marengo were never going to succeed

Pellaud and Gabburo managed a lead of more than a minute, but the sprinter teams prevented the duo from taking too much time. 40 kilometres from the finish, Gabburo led Pellaud across the bonus sprint, Gabburo’s teammate Filippo Fiorelli was third in the peloton. The lead fluctuated for some time around the minute mark, but with 30 kilometres to go the peloton started to chase again. 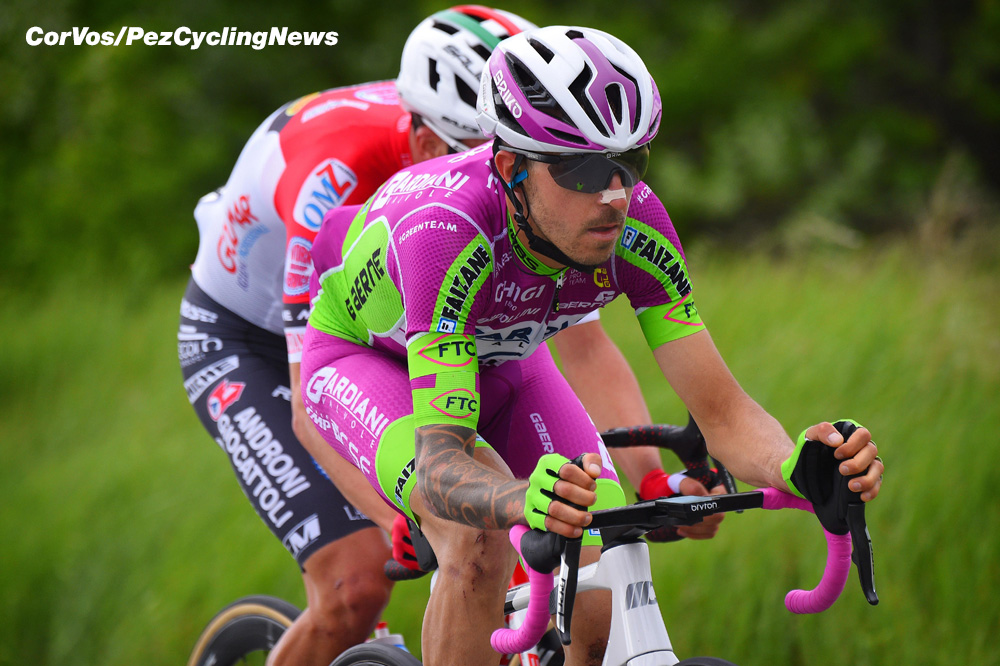 At 24 kilometres from the finish, Alexis Gougeard tried to jump across to the two front riders, as they entered the tourist town of Rimini. After 3 kilometres of chasing, the AG2R Citroën rider caught Pellaud and Gabburo. Pavel Sivakov crashed at high speed and couldn’t get back to the peloton. 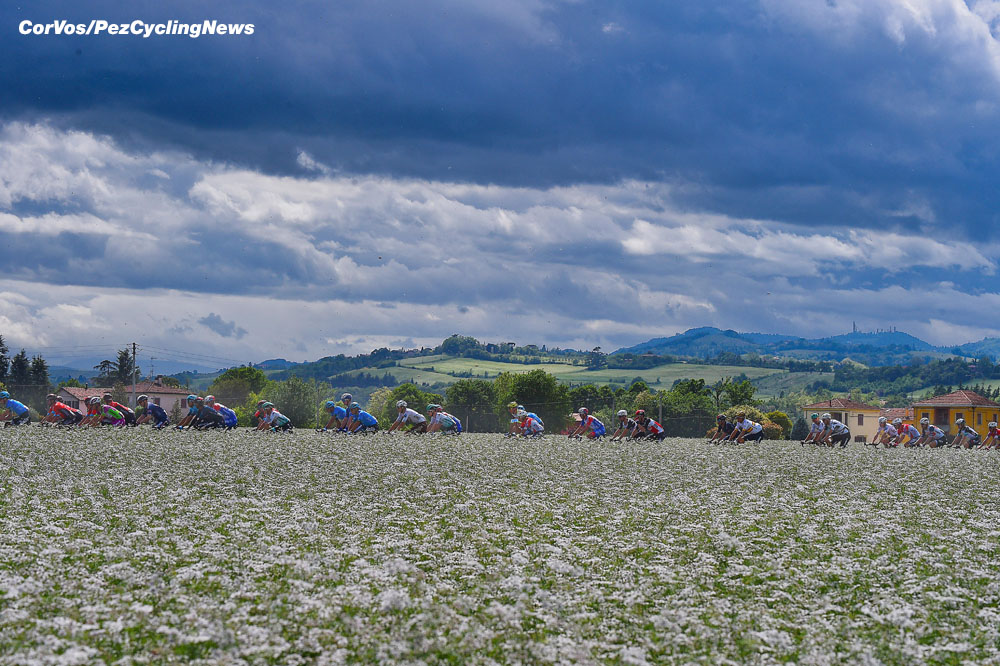 With 9 kilometres to go there was another crash, this time Filippo Fiorelli hit the tarmac with Kobe Goossens. And in the last four kilometres Joe Dombrowski ran into a signalman and took Mikel Landa with him to the road surface. The Spanish rider finished the stage in an ambulance. The peloton rode on unabated. Gougeard at the front couldn’t prevent the escapees from being caught and at 2 kilometres from the finish everything was together. 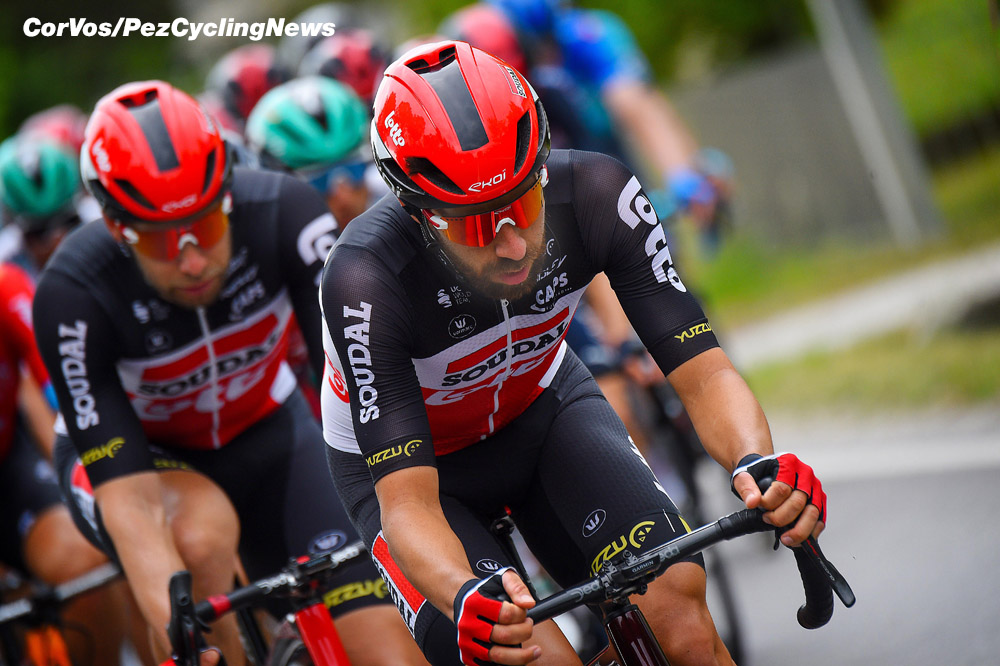 Lotto were working for Caleb Ewan

Lotto Soudal and BORA-hansgrohe led the peloton in to the last kilometre. Elia Viviani launched first, but it was Giacomo Nizzolo who looked to have the best move. The European champion has already won the points classification twice, but has never had a stage success. And again he missed the win, as Caleb Ewan was the first to cross the line with an explosive final jump. 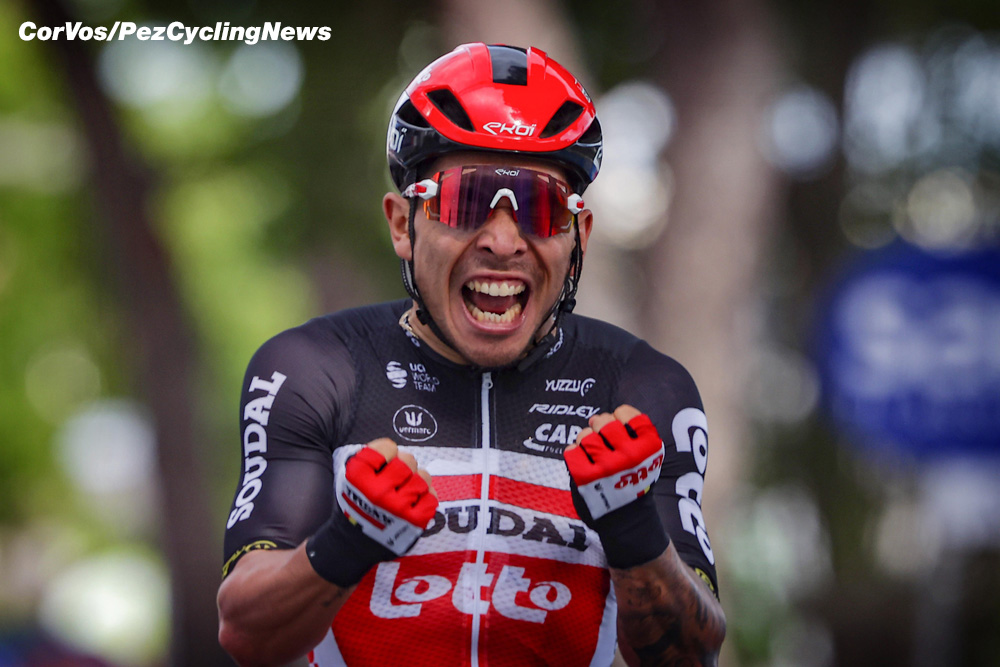 And Ewan finished the job

Stage winner, Caleb Ewan (Lotto Soudal): “It’s a relief because my goal this year is to win at least one stage in all three Grand Tours. There was pressure on me and the team to do a good job today. Now that I have won a stage I think I’ll be hungry for more.”

Maglia Rosa, Alessandro De Marchi (Israel Start up Nation): “My first stage wearing the jersey started out quite relaxed, but the finale was a bit crazy. I hope the guys who crashed are ok. Tomorrow I’ll try to keep this jersey and also help Dan Martin.”