Giro Stage 11 Race Report: Today’s stage was always going to finish with a bunch sprint, but Dries De Bondt nearly upset the fast-finishers with a late attack. He was caught with 1,2 kilometres to go and a chaotic sprint ensued. DSM’s Alberto Dainese pushed his wheel over the line ahead of Fernando Gaviria, Simone Consonni and points leader Arnaud Démare. Juan Pedro López held the overall lead. 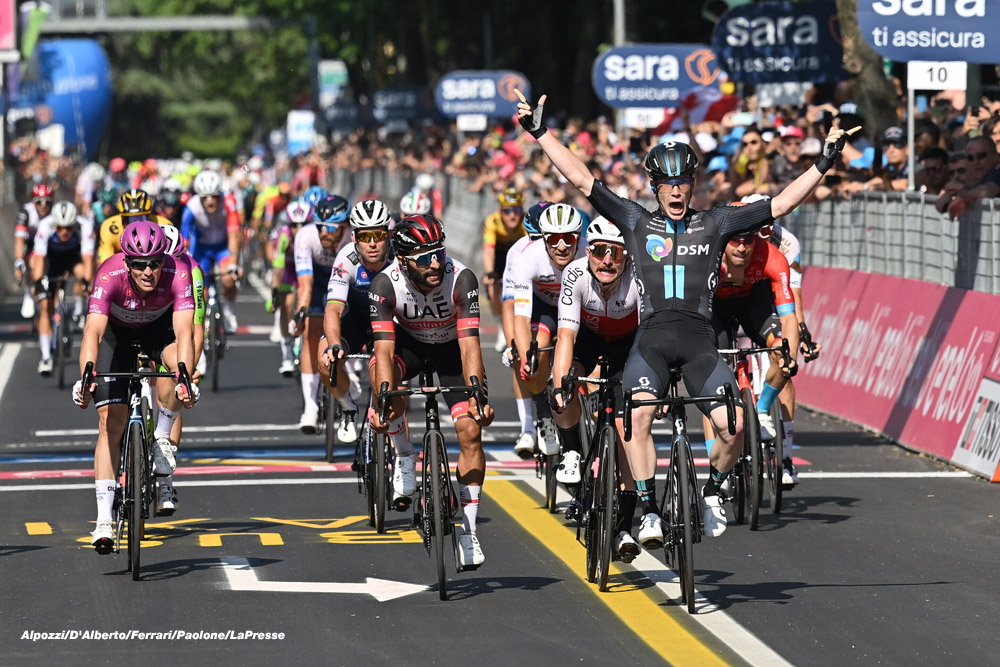 The eleventh stage of the 2022 Giro d’Italia 2022 was won by Alberto Dainese. The Team DSM Italian was the fastest sprinter in the streets of Reggio Emilia after a pan-flat stage of 203 kilometres. The pink jersey will remain on Juan Pedro López’s shoulders for another day. 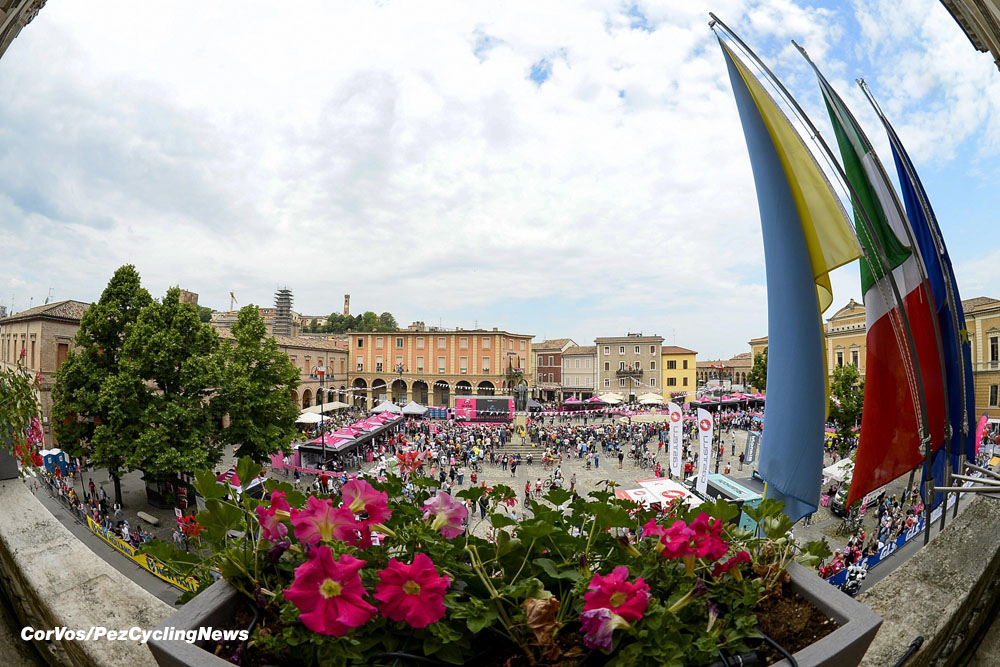 The start of stage 11 was without stage winner Biniam Girmay

The Route:
Stage 11 sees a pan-flat stage across the lowlands of Emilia-Romagna, on straight and mostly wide roads. As the stage passes through several urban areas, roundabouts, traffic islands and street furniture will be found along the route.

Final kilometres
The final kilometres are on wide and well-surfaced roads, with further roundabouts, traffic dividers, pedestrian islands and speed being the main obstacles. The home straight is 350m long. 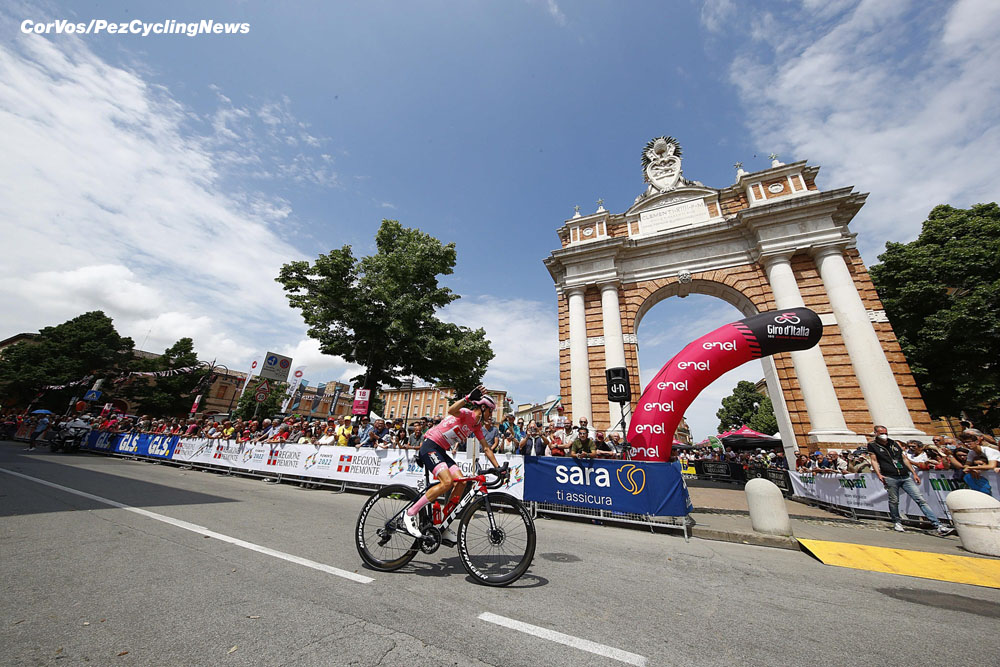 Another day in pink for Juan Pedro López 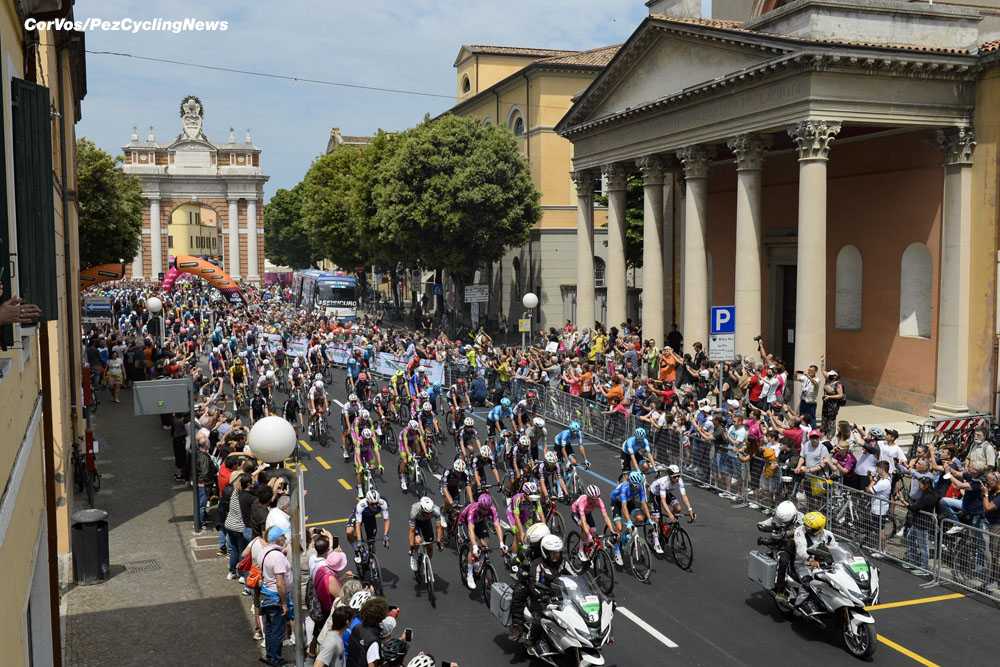 The stage started without Biniam Girmay, due to Tuesday’s stage winner being hit in the eye by a Prosecco cork during the podium ceremony in Jesi. He was advised not to ride due to the injury. More news in EUROTRASH Thursday. 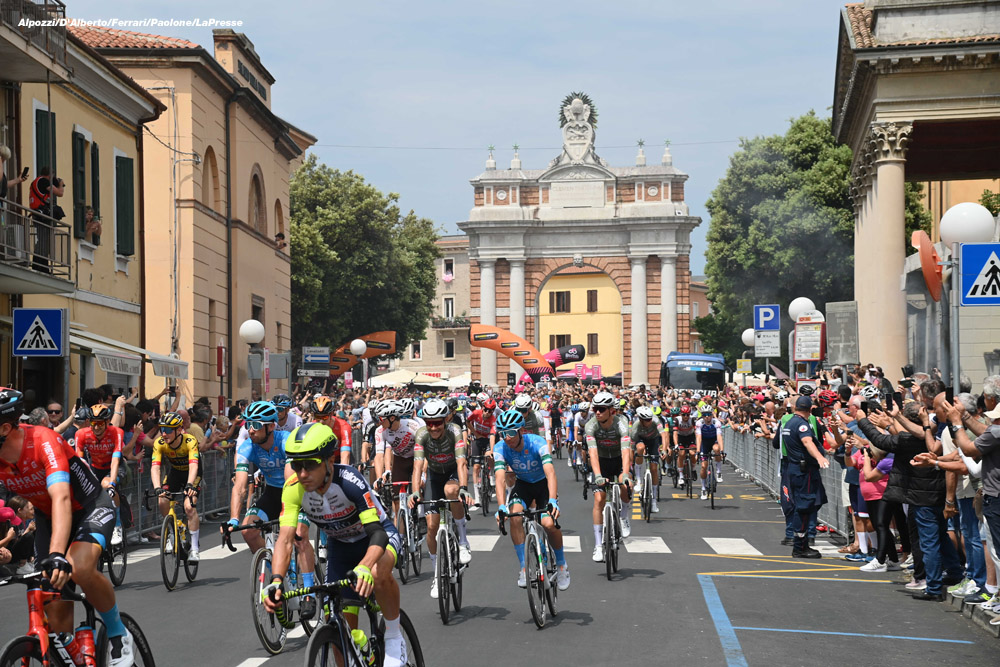 Everyone knew it would be a day for the sprinters 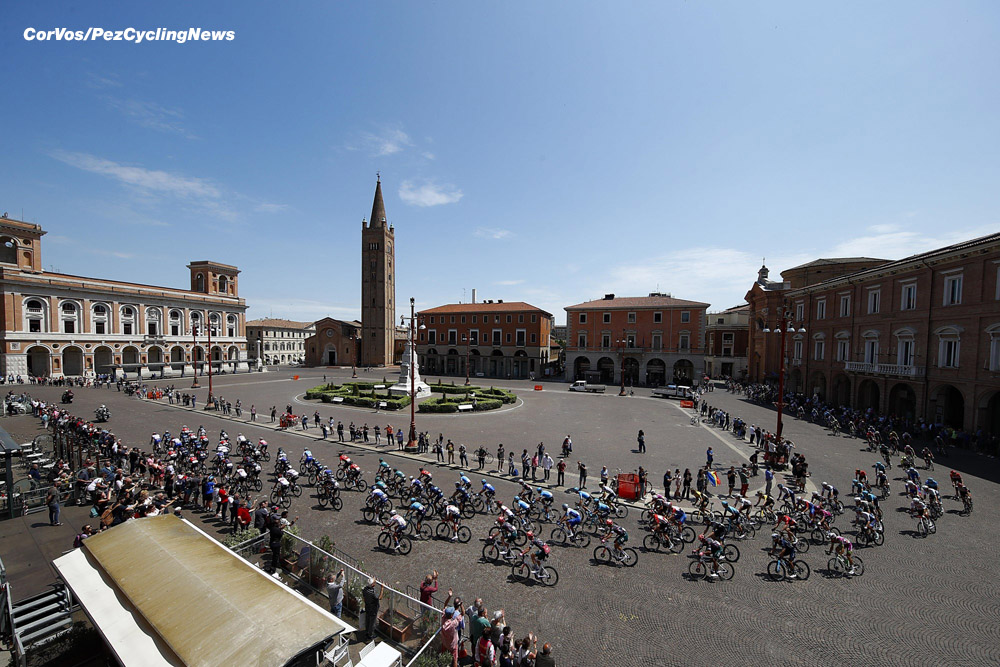 The stage to Reggio Emilia threatened to become a very dull day, because there was hardly any climbing and it was also not a very creative route. The first hours ran on long and wide roads, but it was coloured by two escapees, Luca Rastelli (Bardiani-CSF-Faizanè) and Filippo Tagliani (Drone Hopper-Androni Giocattoli). 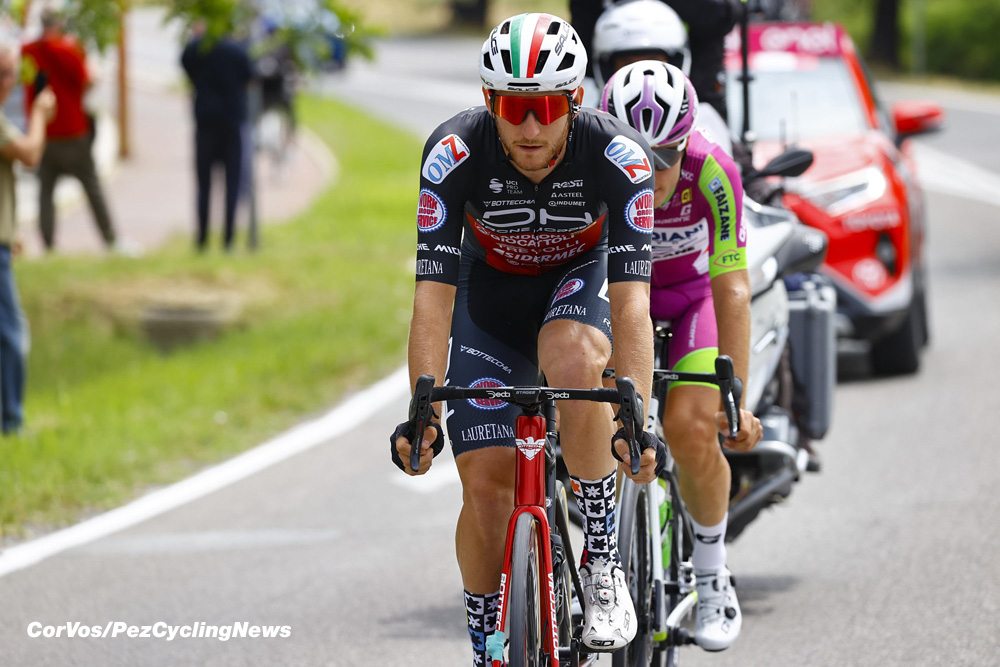 The early break of Filippo Tagliani and Luca Rastelli 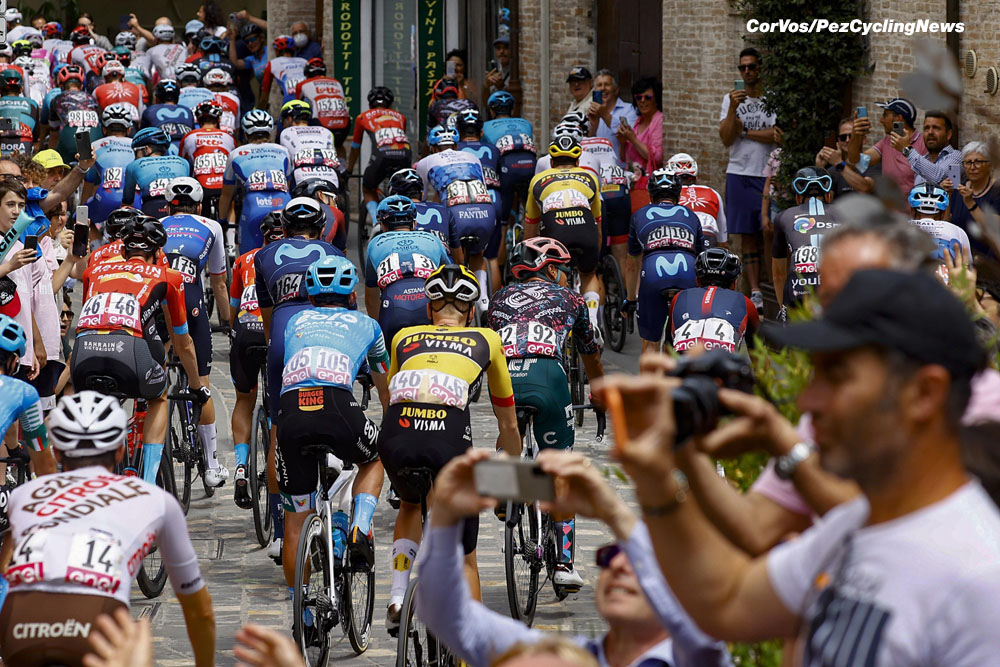 The fans were out again for the Giro

The two Italians were given more than 5 minutes, but the sprinter’s teams kept tight control. At the first intermediate sprint, Mark Cavendish, Giacomo Nizzolo and Arnaud Démare took the most points in the peloton. The lead had fallen to 3 minutes by that point. 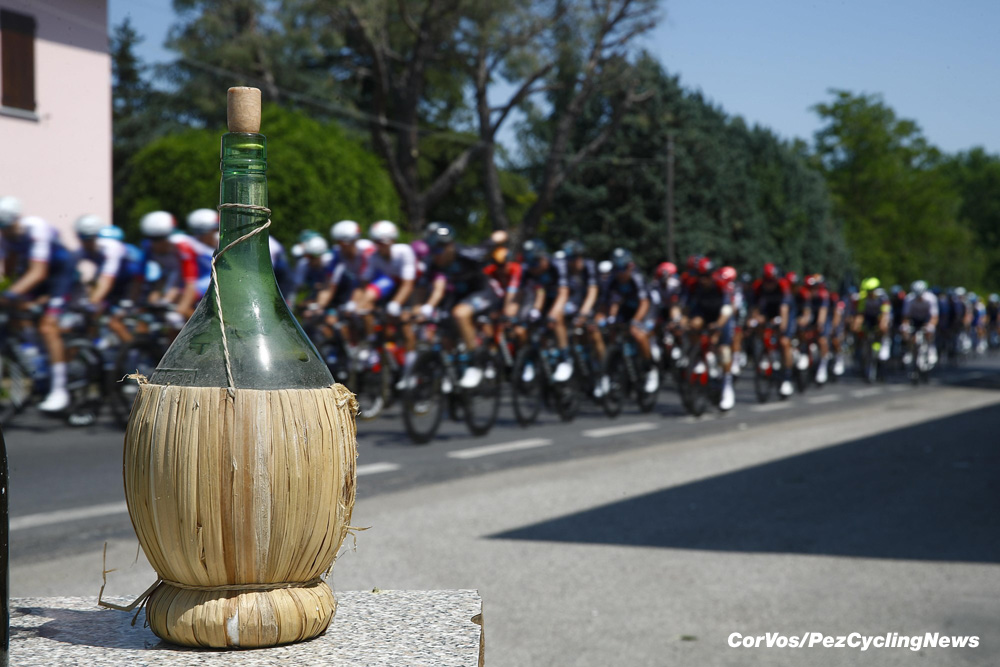 There was nervousness in the peloton, as echelons were possible on the open plains after passing Bologna. The peloton started a loop north of the city of Modena, eventually ending up in Reggio Emilia. Because of the possibility of echelons, Rastelli and Tagliani were caught 92 kilometres from the finish. 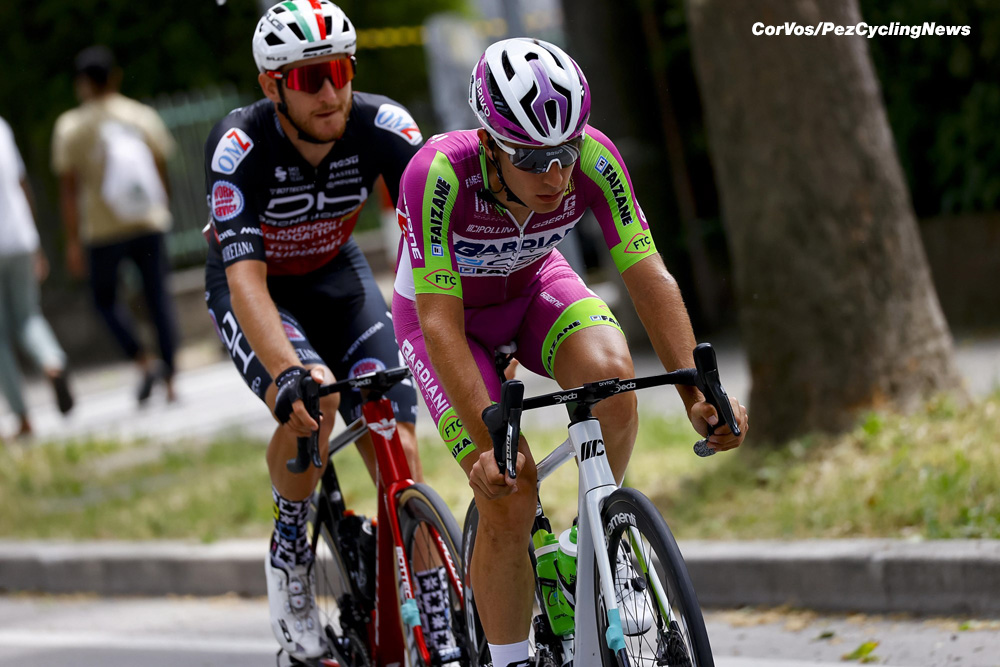 The break was not going to last and it didn’t

The peloton had the wind on its back, which caused a high speed, but a real echelon attempt didn’t come for a long time. At the second intermediate sprint there were 3, 2 and 1 seconds bonus and Richard Carapaz took the full 3 seconds in first place. He jumped over Romain Bardet and is now level with João Almeida on the general classification. 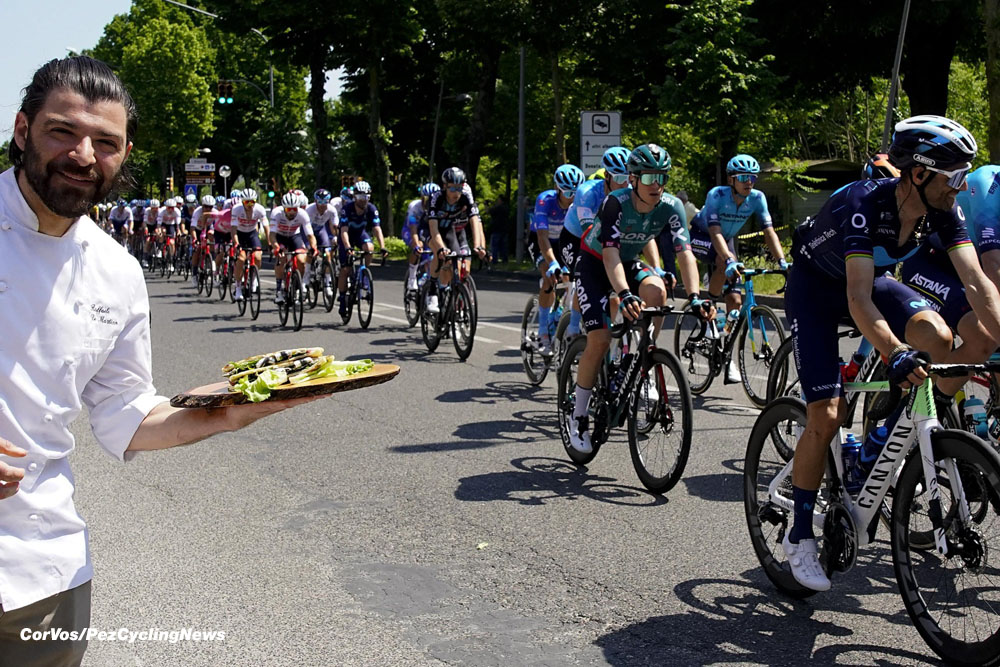 It was a day off for many

About 60 kilometres from the finish, Dries De Bondt attacked. He managed to escape and gained more than a minute and a half, but the bunch didn’t seem too concerned. The sprinter’s teams kept control, but De Bondt stayed ahead of the pack at about 20 seconds for a long time. 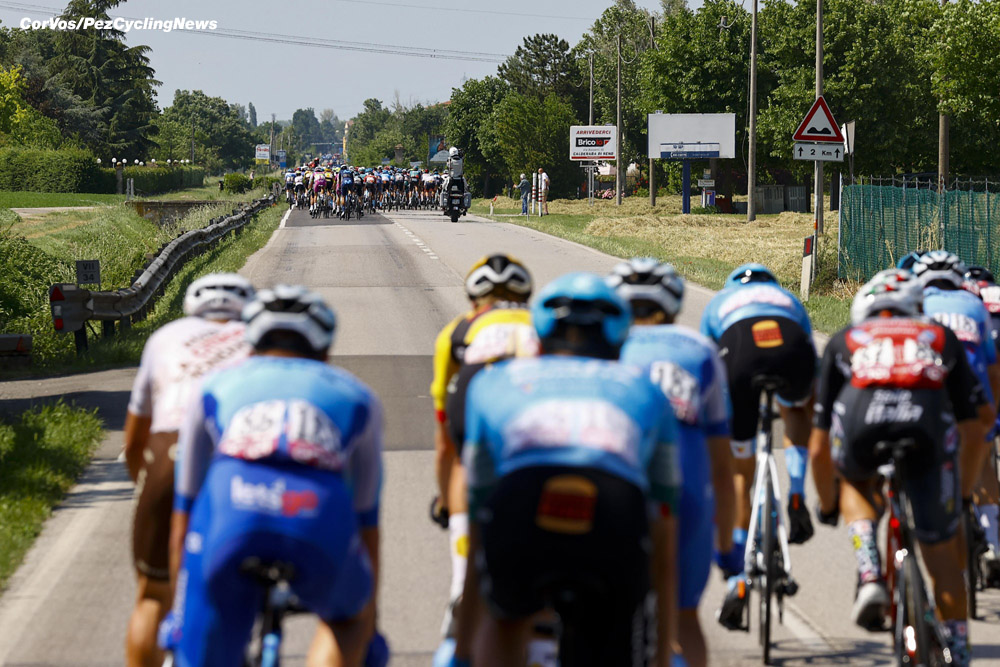 The cross wind caused a split about halfway through the stage

The last 5 kilometres were fairly straight forward and so the sprint trains could see the solo De Bondt in front of them. Quick-Step Alpha Vinyl, Lotto Soudal, Groupama-FDJ and Team DSM took the lead, plus the other sprinters also moved forward. 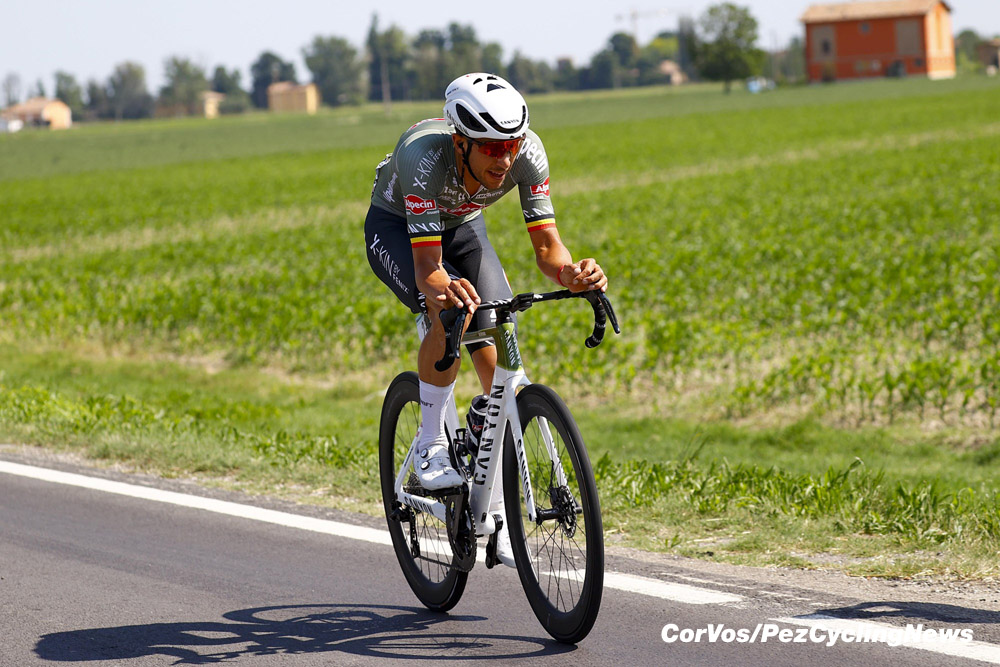 Dries De Bondt went solo in the finalé, but was caught with 1,2km to go

At 1.2 kilometres from the line, De Bondt’s escape was over, after which it was up to the sprinters. No train managed to get their sprinter in place properly, after which Arnaud Démare was first to open the battle. He was pulled in, in the final straight by Fernando Gaviria, but Alberto Dainese was coming fast from behind. 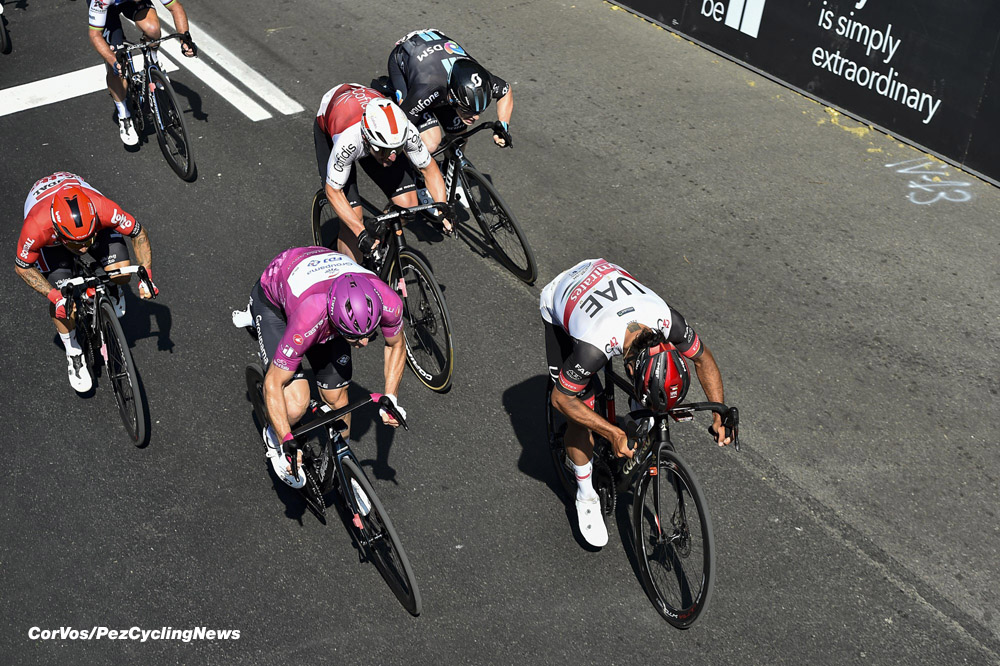 Dainese came from behind 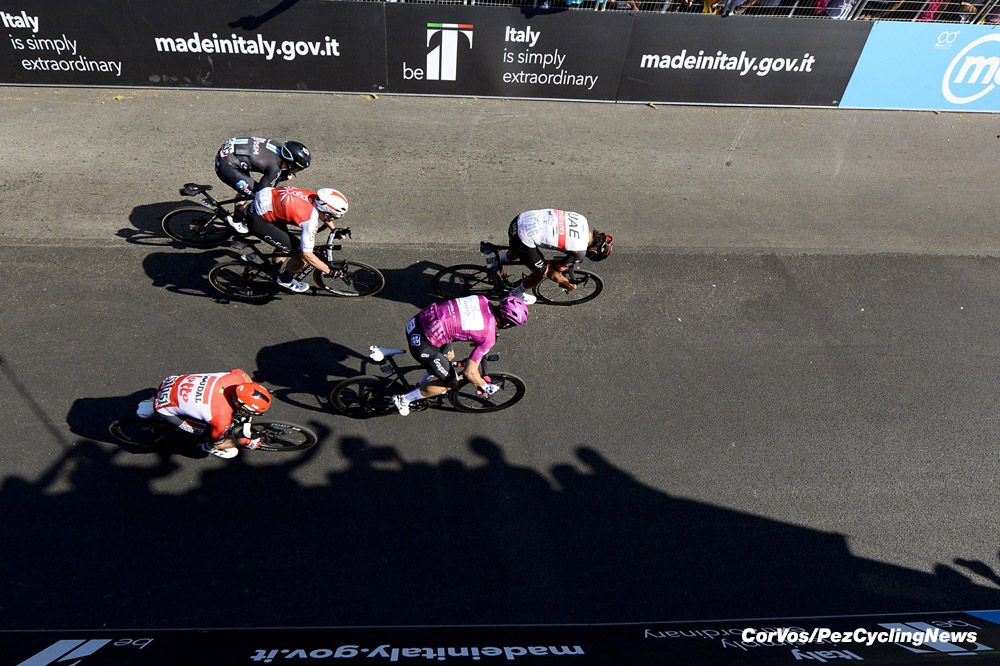 From fourth to first

The little Italian from Team DSM was moving much faster than the rest and passed Gaviria and Simone Consonni. Démare was fourth, Ewan fifth and Cavendish sixth. For Dainese it is only his third professional victory. This was also the first stage victory in this Giro by an Italian rider and is Team DSM’s first WorldTour victory of 2022. 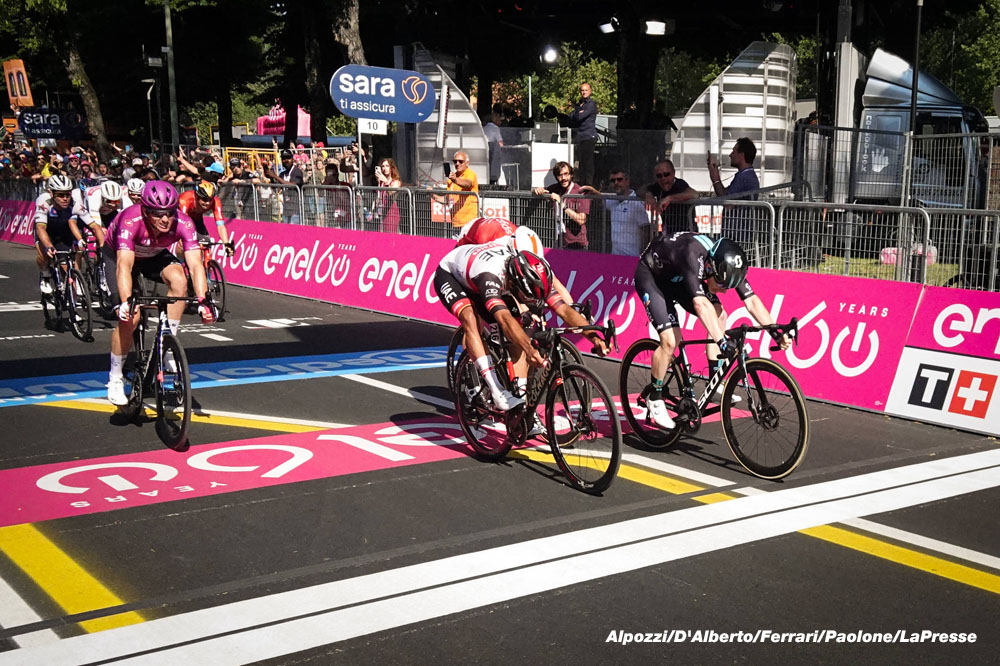 Dainese had the jump 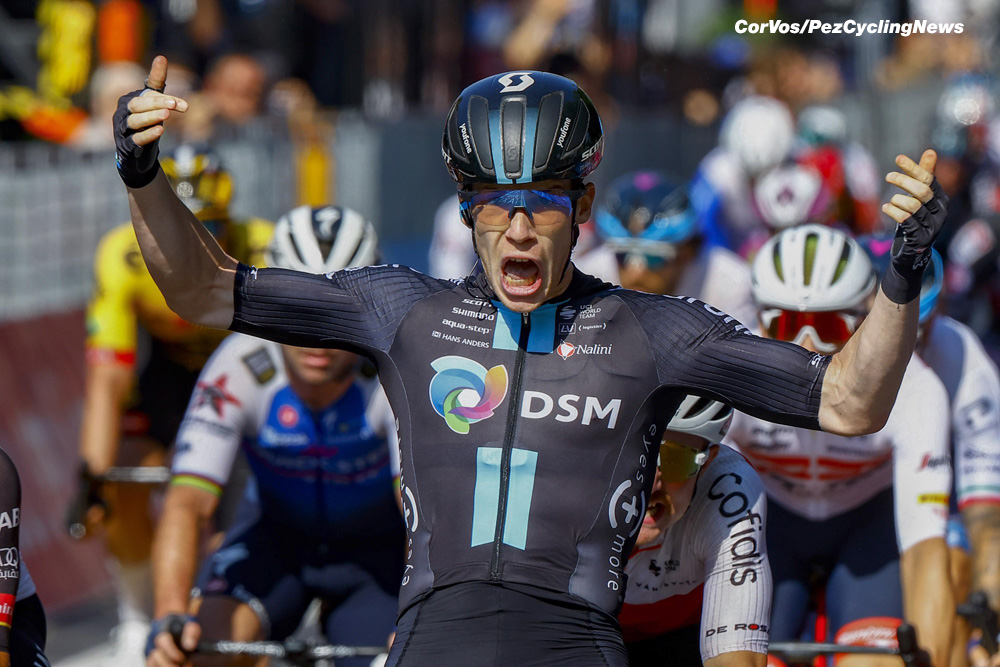 The Italian came round all the top sprinters for the win

Stage winner, Alberto Dainese (DSM): “To win so close to home at the Giro d’Italia is unbelievable. This morning our plan was to sprint with Cees Bol. It didn’t work that way. It’s insane that Romain Bardet, who is third on GC, led me out. It’s a fantastic feeling to win a stage of the Giro d’Italia!” 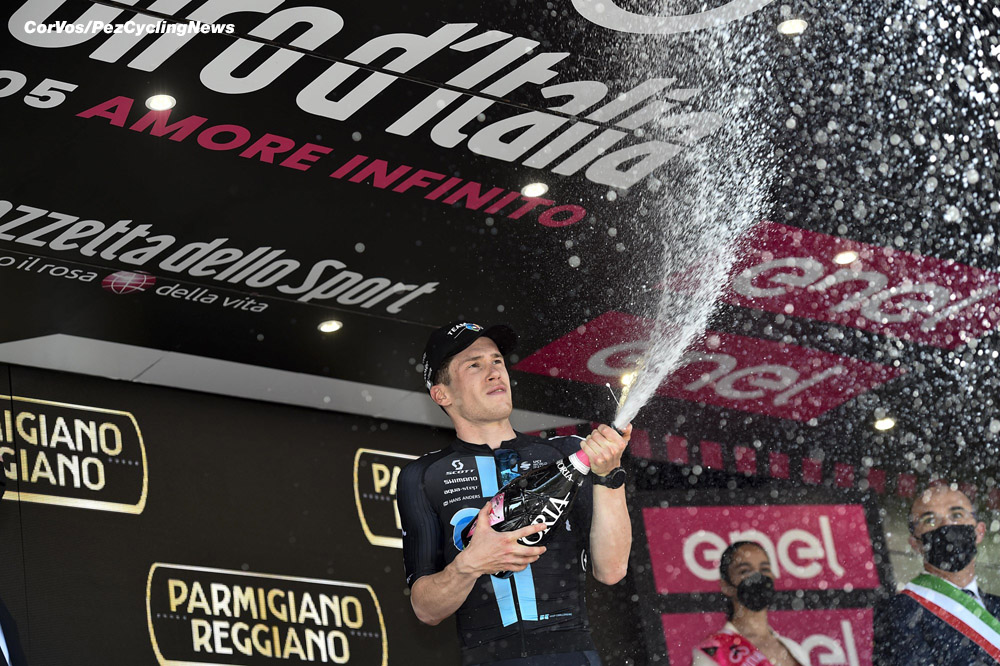 No accidents on the podium for Alberto Dainese

Maglia Rosa, Juan Pedro López Perez (Trek-Segafredo): “I’ve seen Richard Carapaz going for time bonus in an intermediate sprint but I’m not as fast as he is. There was nothing I could do. Anyway I’m very happy to keep the Maglia Rosa for at least one more day. My team-mates have done a tremendous job today again, always telling me what to do. There were some difficult moments today as well but thanks to my team I overcame them.” 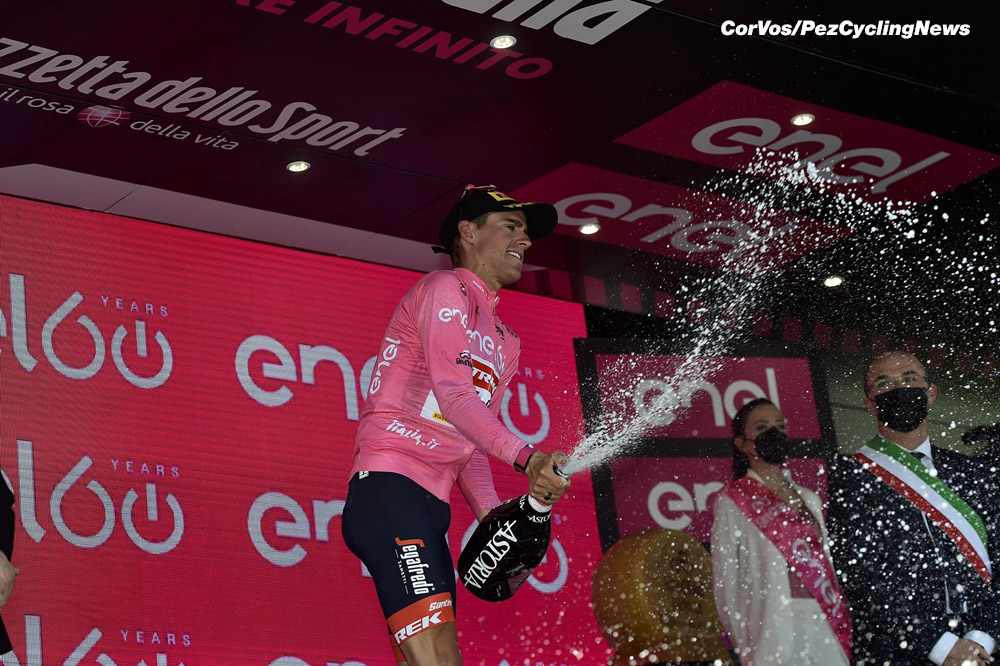 Another day in pink for López