Giro Stage 7 Race Report: A super strong break formed early and was whittled down to four riders: Koen Bouwman, Davide Formolo, Tom Dumoulin and Bauke Mollema. The stage victory came down to a sprint from these four and it was the young Bouwman who had the best legs after a tough 196 kilometres. The bunch came in at 3 minutes with Juan Pedro López keeping the pink jersey. 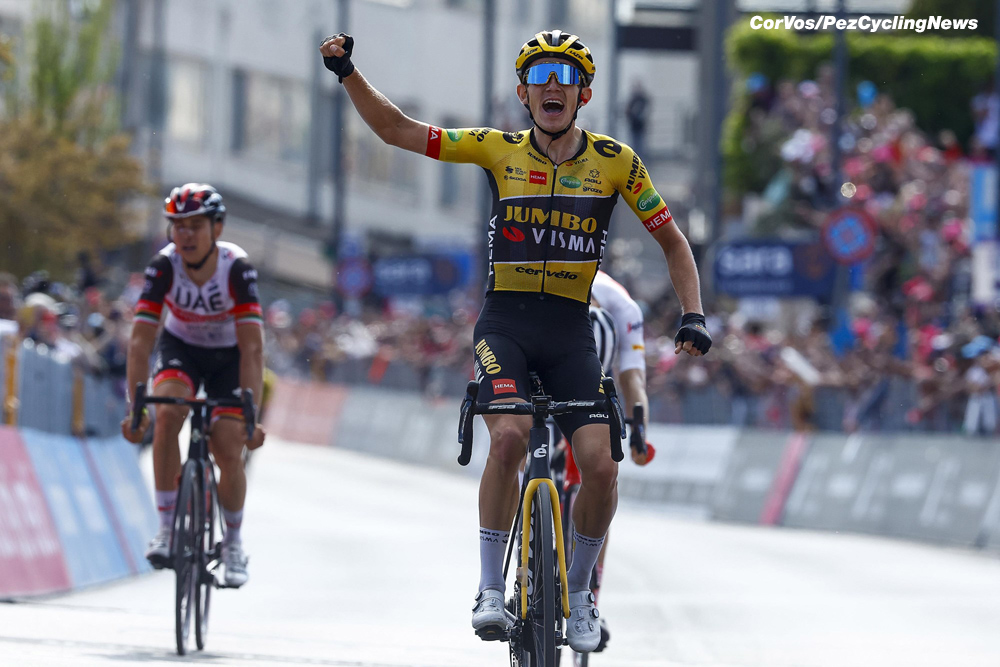 Koen Bouwman won the seventh stage of the Giro d’Italia. In Potenza, the Dutchman of Jumbo-Visma was the best of a leading group of four men. He beat countryman Bauke Mollema and Italian Davide Formolo in the sprint, while his teammate Tom Dumoulin finished fourth. Bouwman also took the lead in the KOM classification. 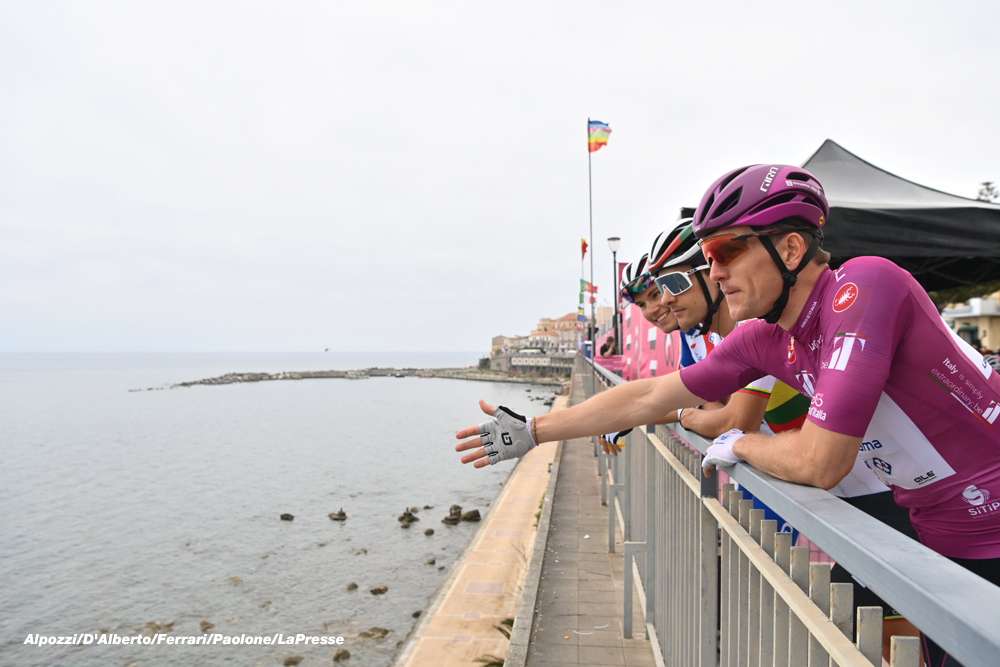 The Route:
A very challenging stage that journeys across the Southern Apennines. The start, along the sea, is the only flat stretch. Past Maratea, the route rolls continuously, with a mix of mild or harsh gradients. After climbing the Passo della Colla, and reaching Lauria, the riders will tackle Monte Sirino. The route then hits Viggiano, clearing the challenging Montagna Grande di Viggiano, and then takes a final ascent of Sellata before reaching Potenza. Throughout the course, the roads are usually narrow and can be damaged at points, twisting continuously along the mountainside. 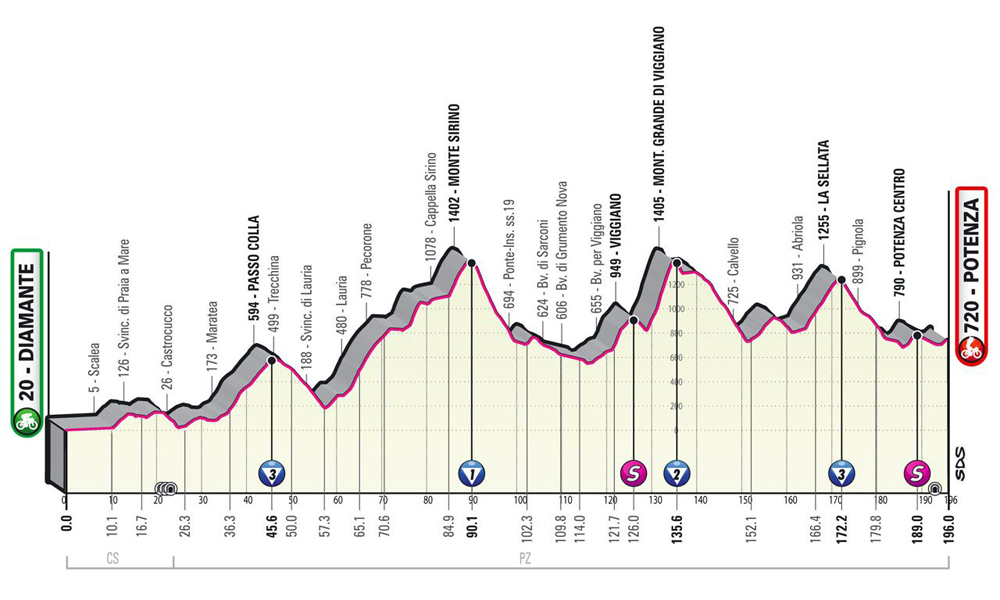 Final kilometres
The final kilometres are raced entirely on urban roads. The route runs uphill across the inner city, with sharp gradients at points, and then descends along wide and well-paved avenues. There is a short tunnel at the 2 km marker, leading into the finish avenue. The last 350m has an average gradient of 8%, but reaches 13% in parts. 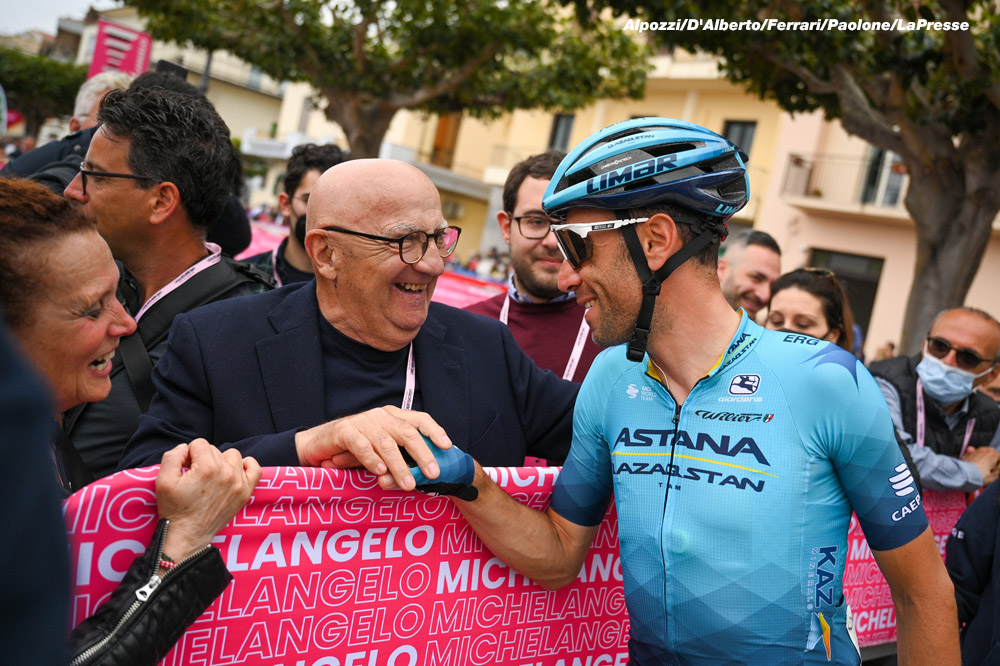 Vincenzo Nibali and the parents of Michele Scarponi 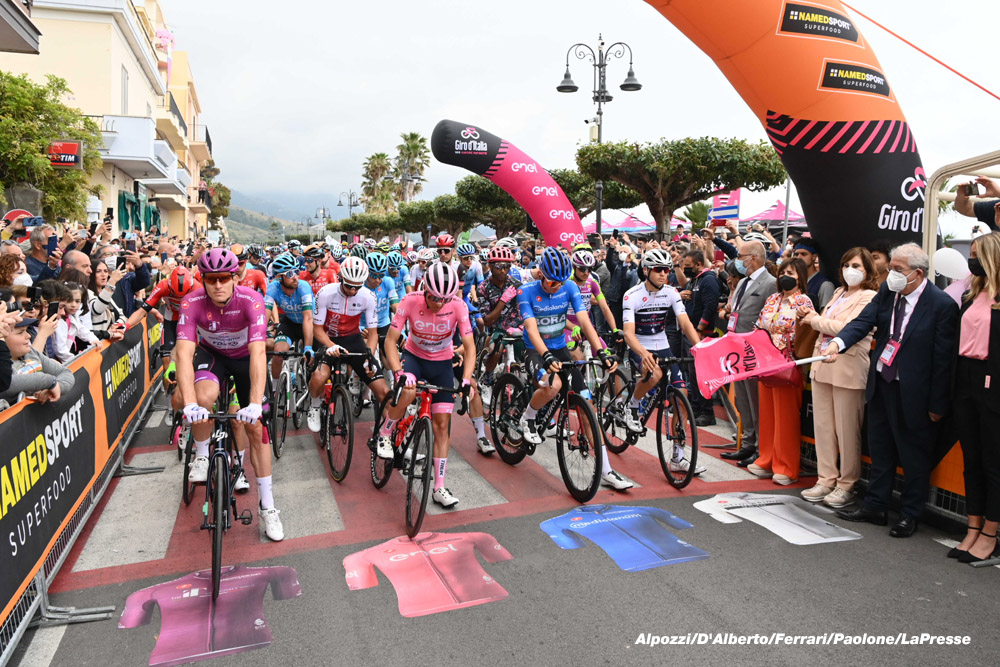 The jerseys at the start – Who will be wearing them this evening?

Michael Mørkøv did not sign-on this morning. Mark Cavendish’s Danish lead-out man had a fever during the night. With Juan Pedro López in the pink jersey for the third day, the stage got underway. There was a fierce battle for the break of the day, with a particularly fast pace. Attacker Thomas De Gendt tried, Van der Poel made several escape attempts and KOM Lennard Kämna also gave it a go. As he was second on GC, the German was not allowed any space by Trek-Segafredo, the team of pink jersey López. 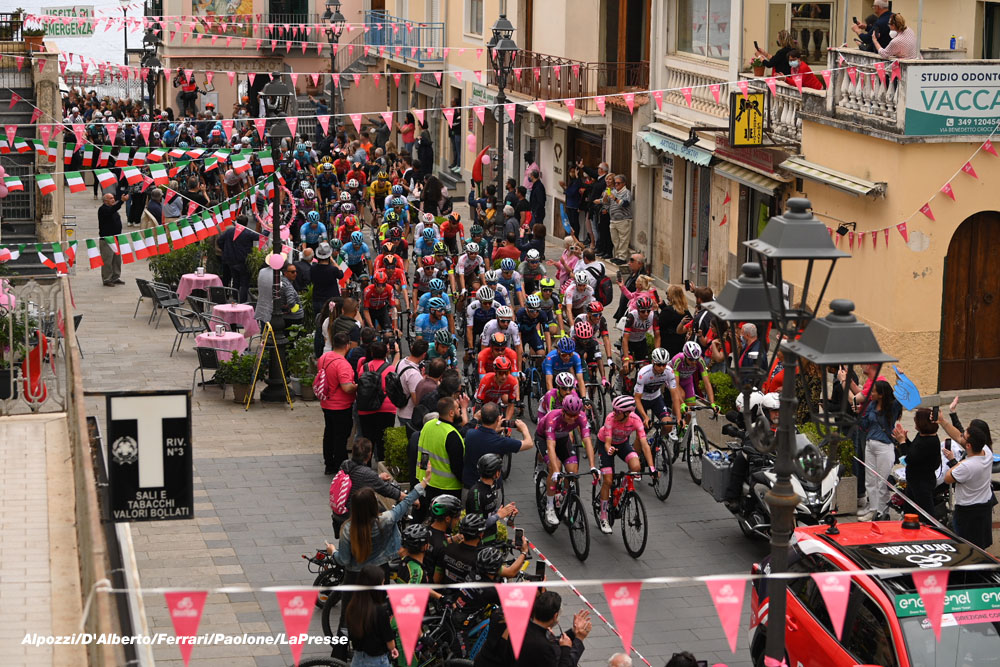 The peloton leaving Diamante on a hard day 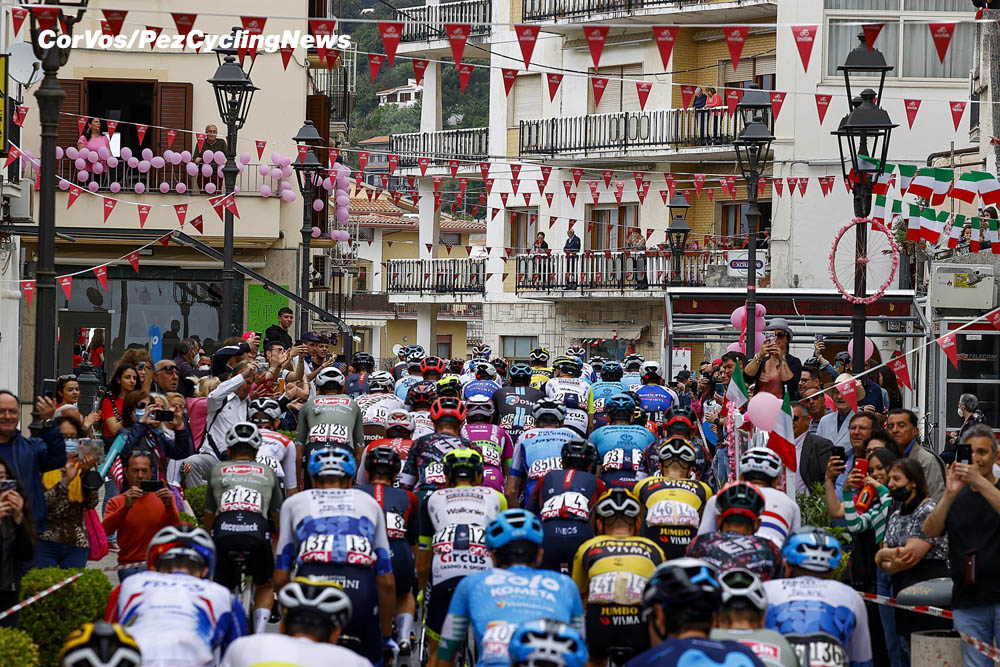 On the Passo Colla, the first climb of the day, Wout Poels attacked and was the first over the top, collecting the first points for the mountains classification. There were many attacks until the long climb of Monte Sirino, but no break was successful. The escape finally came about after 70 kilometres. Four Dutchmen were in front with Wout Poels (Bahrain Victorious), Tom Dumoulin and Koen Bouwman (Jumbo-Visma) and Bauke Mollema (Trek-Segafredo). The others were Davide Villella (Cofidis), Diego Camargo (EF-EasyPost) and Davide Formolo (UAE). 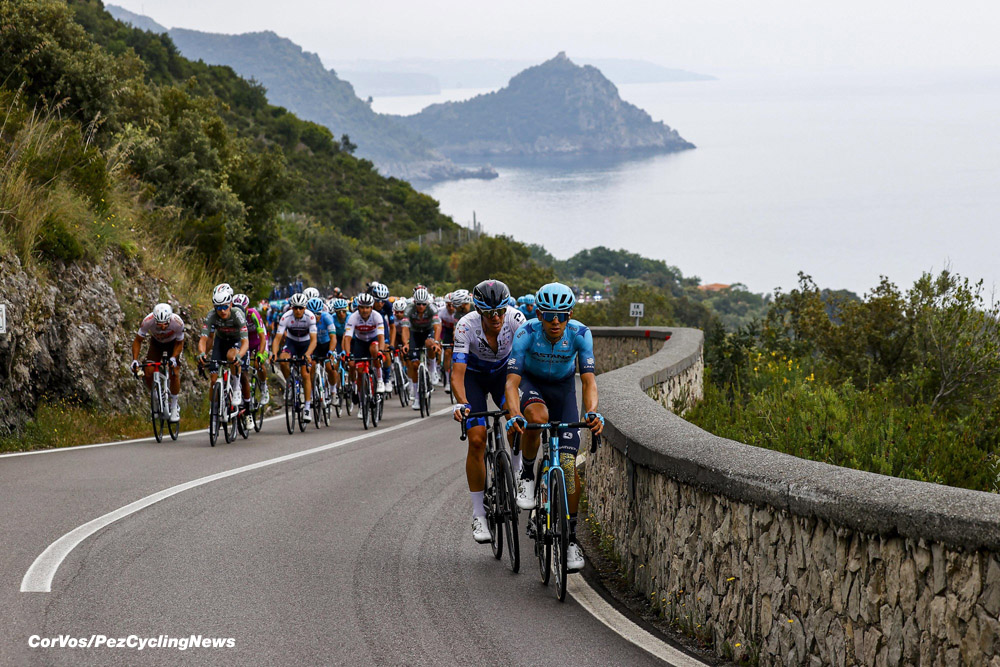 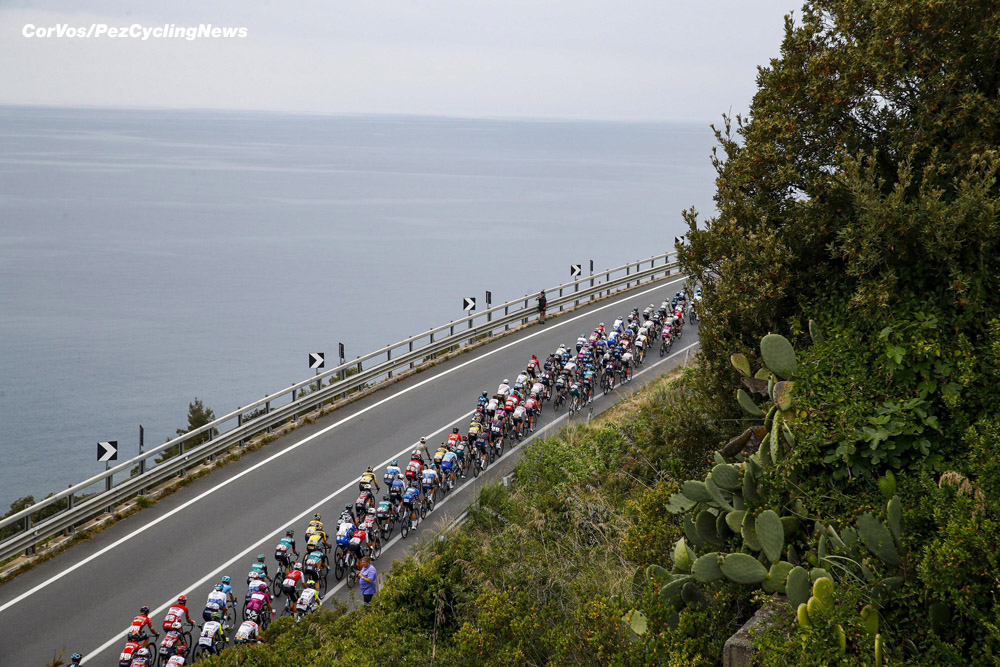 From the coast to the mountains on stage 7

The peloton slowed, allowing the seven escapees to get away. The leading group had 5 minutes at the top of the Monte Sirino, where Bouwman was the first over the top for 40 mountain points. The Dutchman was the best-placed of the break and when the lead increased to over 5:30, he was in the virtual pink jersey. The race lost more riders: Movistar lost to Sergio Samitier. EF Education-EasyPost saw Owain Doull give up and Bardiani-CSF-Faizanè had to continue without Samuele Zoccarato. 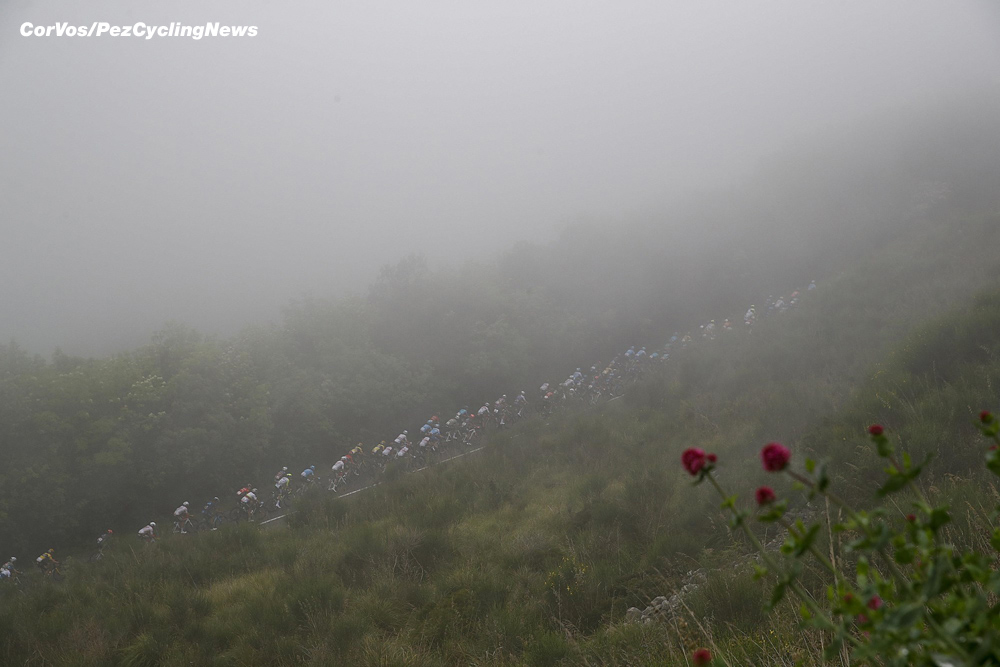 Thick fog on the first climbs of the Southern Apennines. 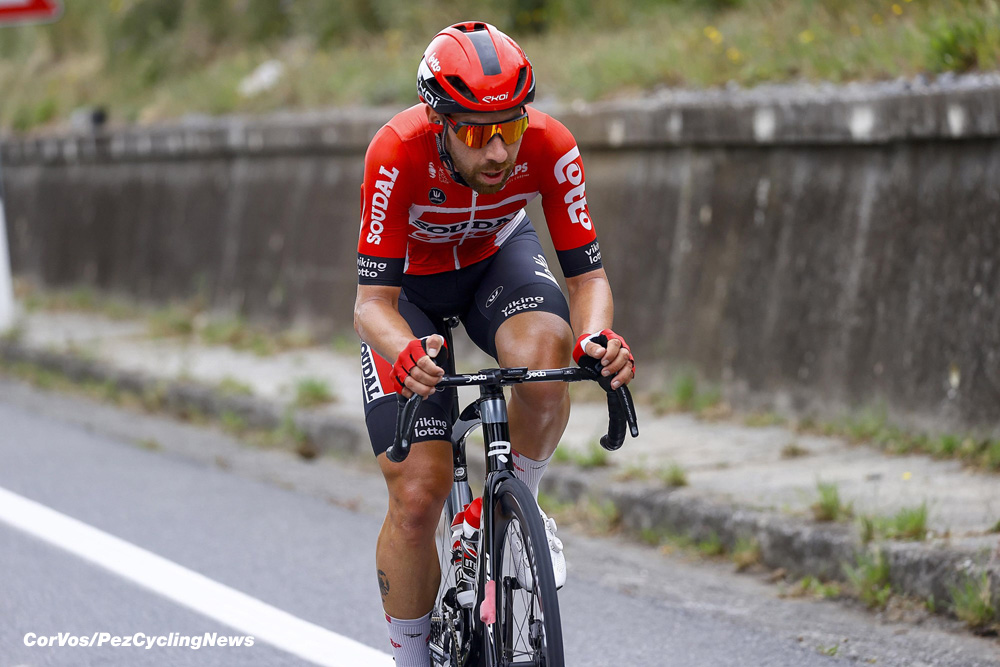 Thomas De Gendt (Lotto Soudal) started the action, but didn’t manage to get in the break

On the descent to the foot of the Montagna Grande di Viggiano, the third climb, Villella took a curve badly and ended up in the grass. The Italian was able to get back on the bike and take his place in the leading group. On the second category climb, with an average of 9.1%, the steepest slope of the day, Poels was the first escapee to be dropped, followed a little later by Villella and Camargo. We were now left with Formolo, Dumoulin, Bouwman and Mollema. Camargo was able to fight back. 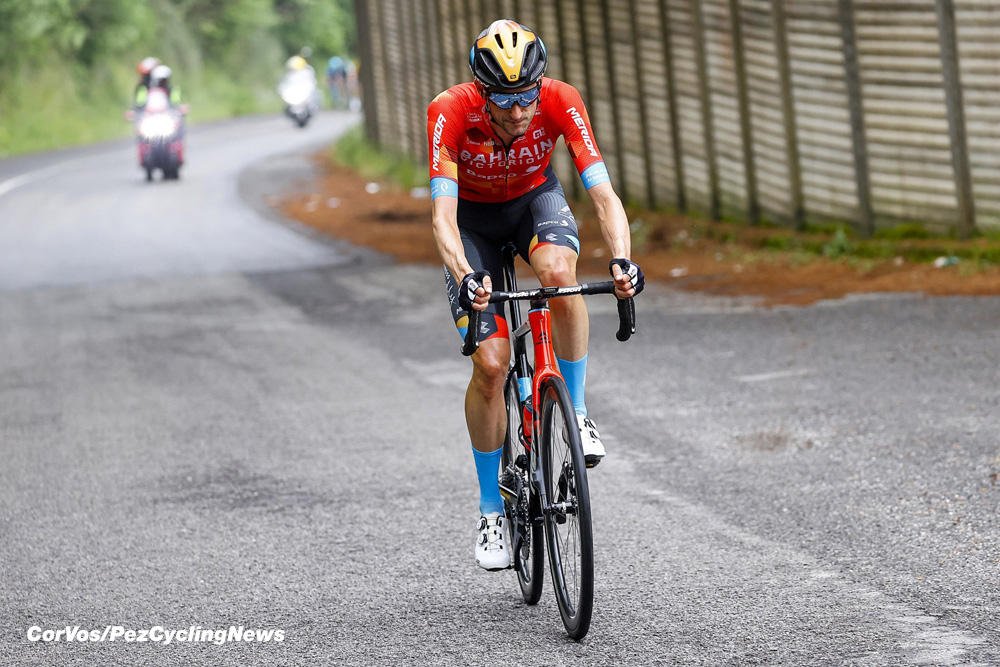 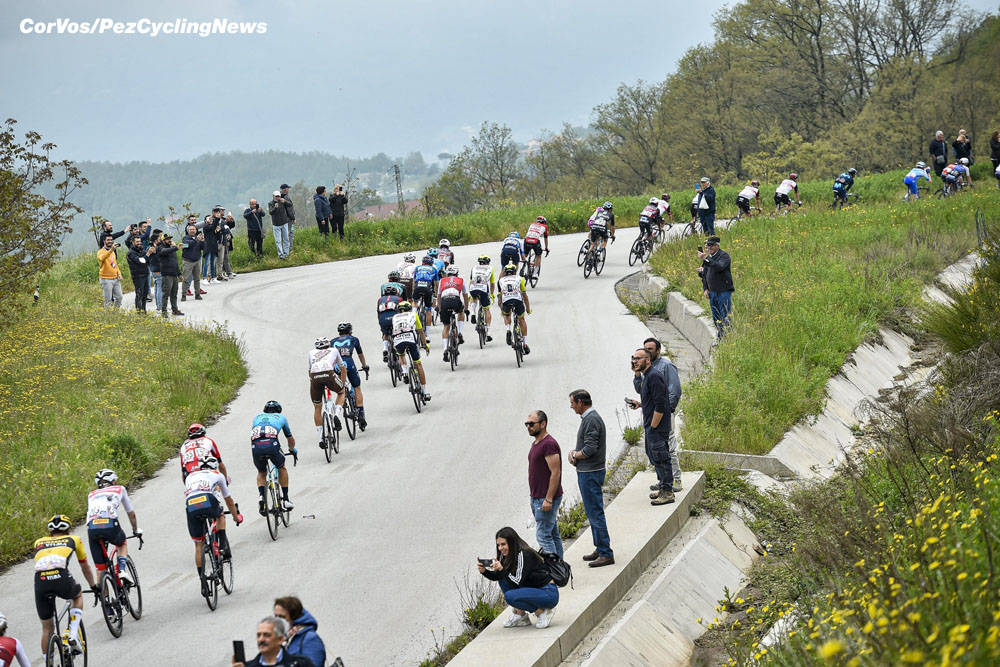 The peloton split and the sprinters were dropped

Bouwman was first at the summit of the Montagna Grande di Viggiano, putting him in the lead of the KOM. On the descent, Villella was also able to return to the front. On an uncategorised climb on the way to La Sellata, Bouwman tested the opposition with an attack. Mollema went with him, but the duo did not get away. Dumoulin attacked several times on La Sellata, but Formolo always brought the others back. Due to the moves of the strong Dutchman, Villella and Camargo were dropped from the leading group. 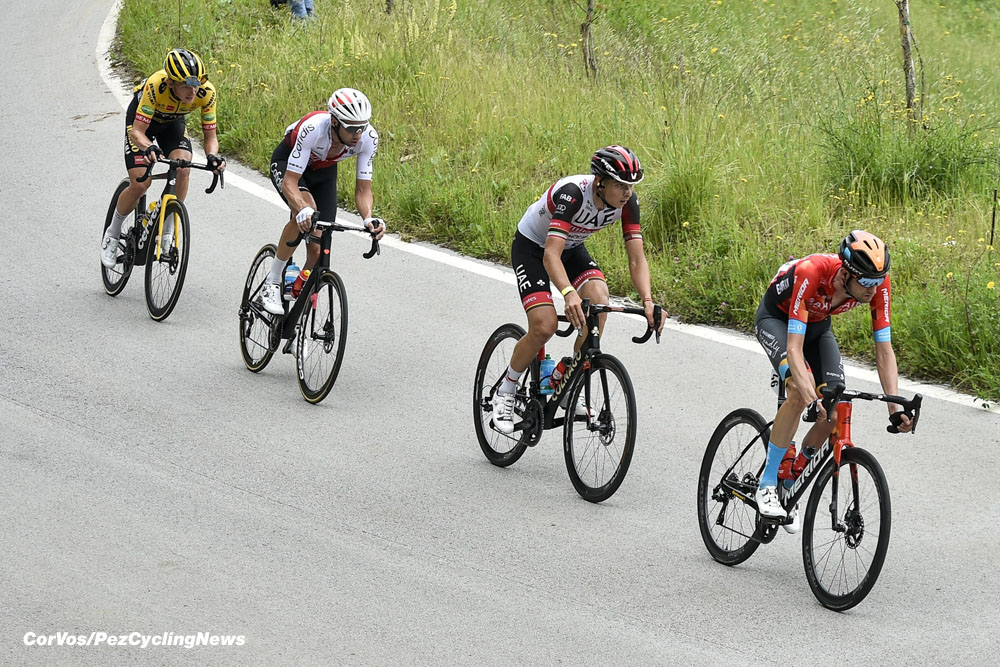 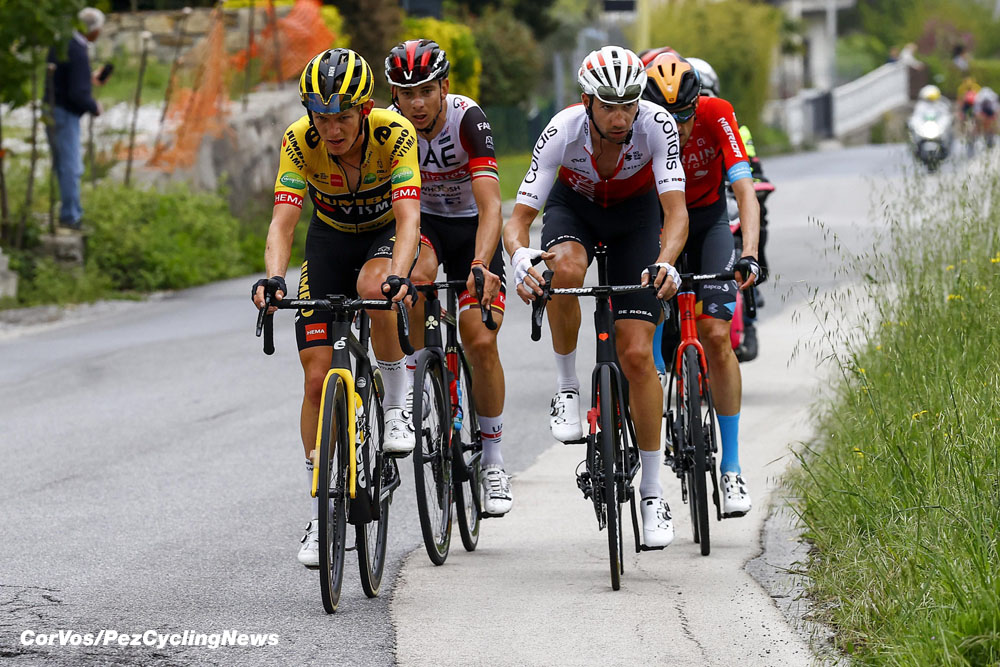 At 28 kilometres from the finish, Dumoulin attacked again. Formolo and Mollema were able to get to him, but Bouwman had to leave a gap. This was the moment for Mollema to launch a counter-attack. Bouwman was distanced again, but Dumoulin and Formolo were able to return. Then it was Formolo who tried. Dumoulin and Mollema joined him a kilometre from the top, while Bouwman was also able to rejoin at his own pace. The new KOM took the full points on La Sellata, ahead of Formolo who was also interested in the points. 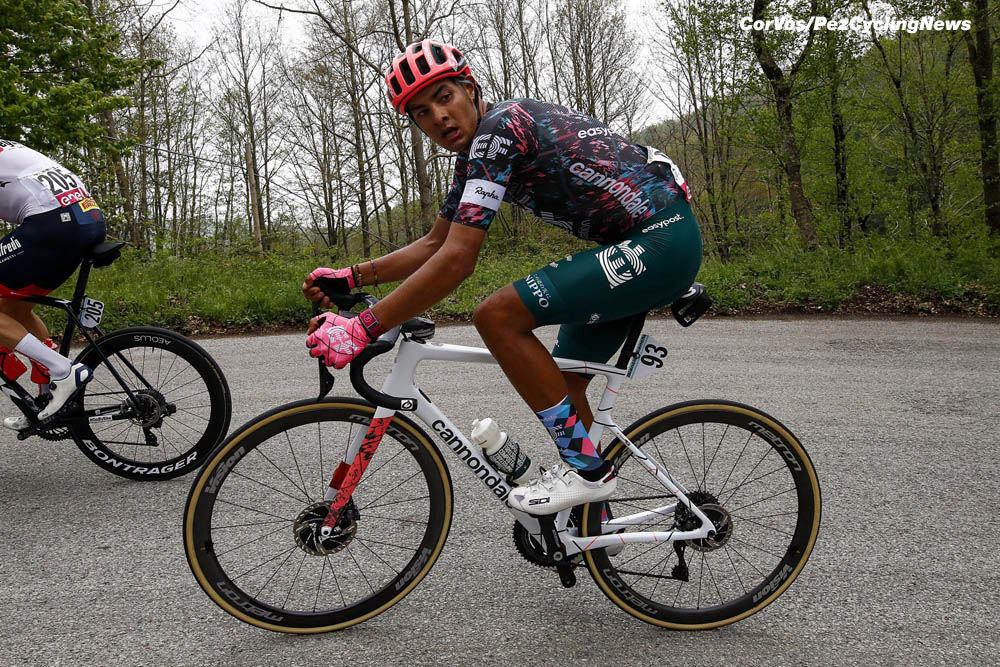 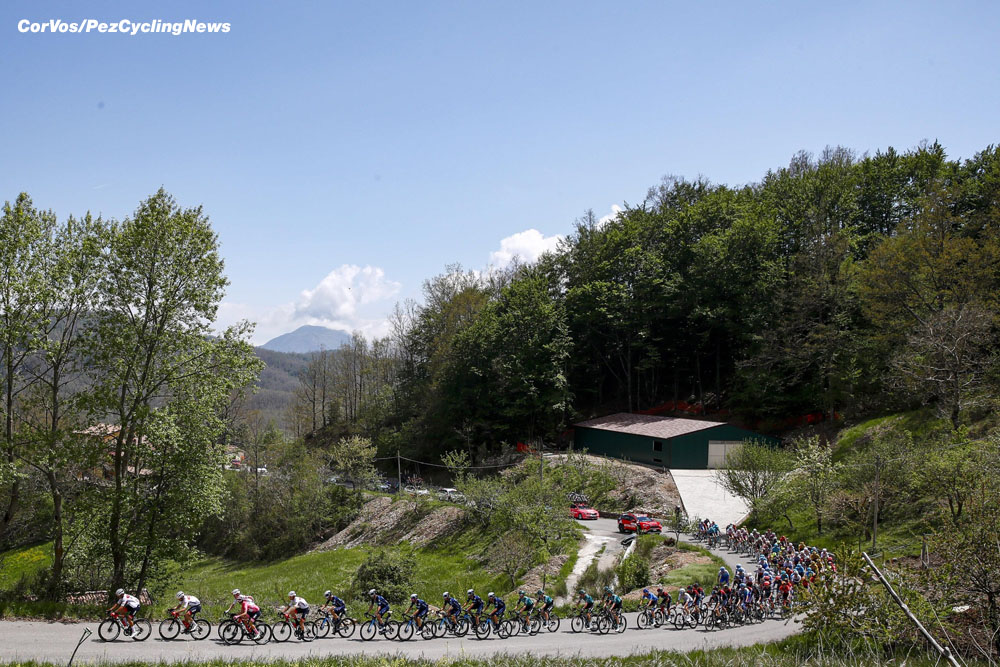 The peloton was steady behind the break

Formolo then tried to pull away again on the descent, but Dumoulin closed the gap. These four attackers were together in the valley. At 7 kilometres from the finish there was still a climb and again Mollema attacked. Bouwman and Formolo pulled him in and Dumoulin also got back to the front. The 2017 Giro winner then took the lead in the service of Bouwman. Just before the top Mollema tried again and Bouwman and Formolo jumped on his wheel. As with Mollema’s previous attack, Dumoulin couldn’t follow. 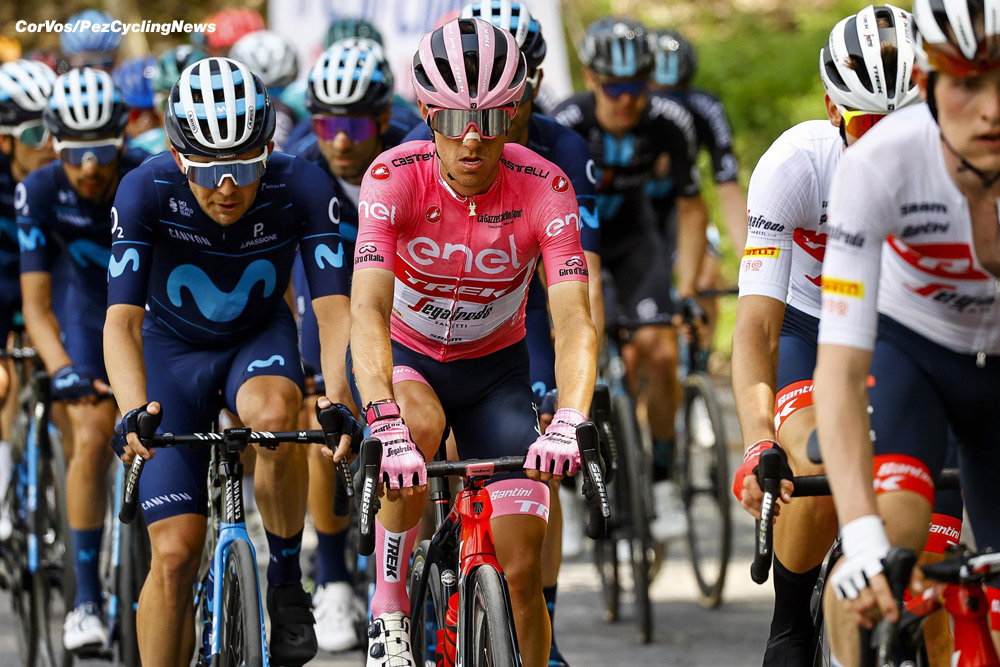 Trek-Segafredo wanted to keep López in the pink, but they had Mollema up the road 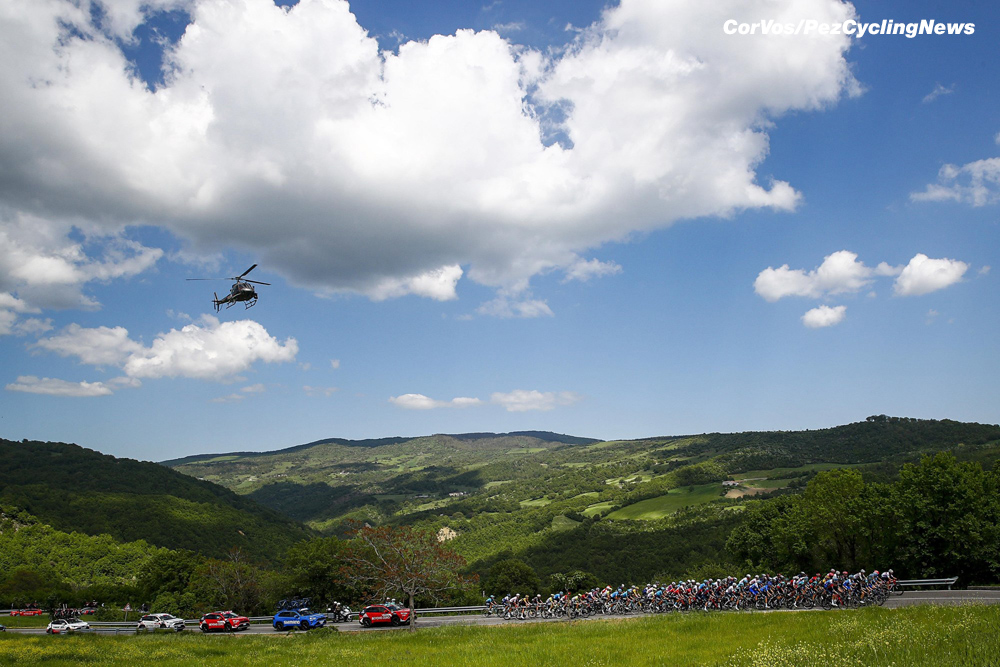 The bunch was split, but the sprinters had no problems with the time cut

Formolo tried again just after the top, but again Bouwman was on him. Mollema was also able to join. At 3 kilometres from the finish, Formolo tried again, but in vain. Suddenly Dumoulin was with them again. As a result, the four of them started the final kilometre, of which the last 350 metres were at about 8%. Dumoulin took the lead, with Formolo, Bouwman and Mollema on his wheel. Bouwman started a long sprint and shook Mollema and Formolo off his wheel. The 28-year-old rider maintained his effort to the finish line and took his first Grand Tour victory. 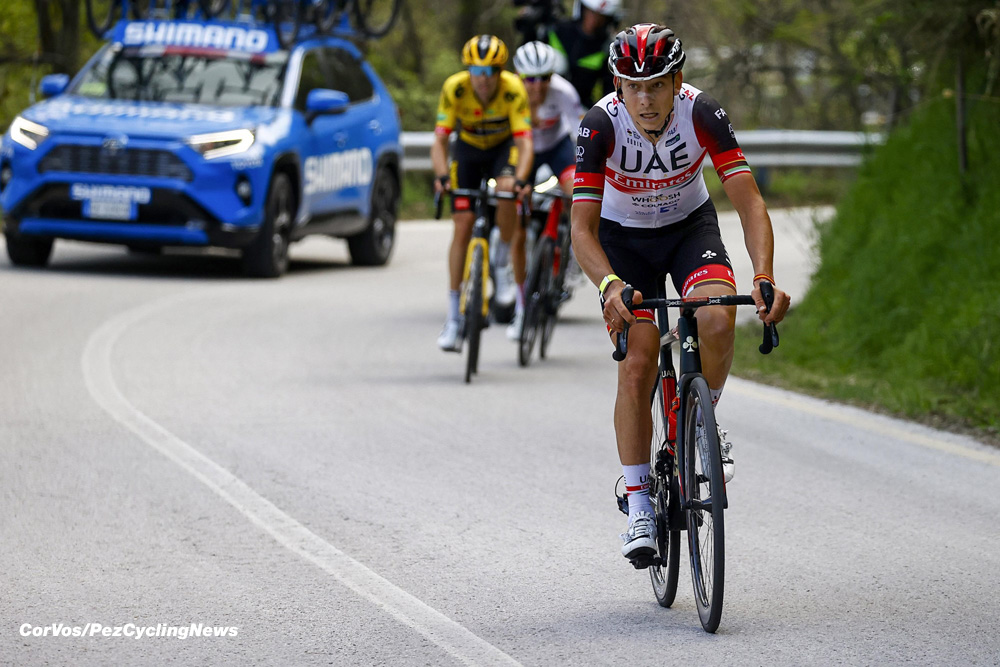 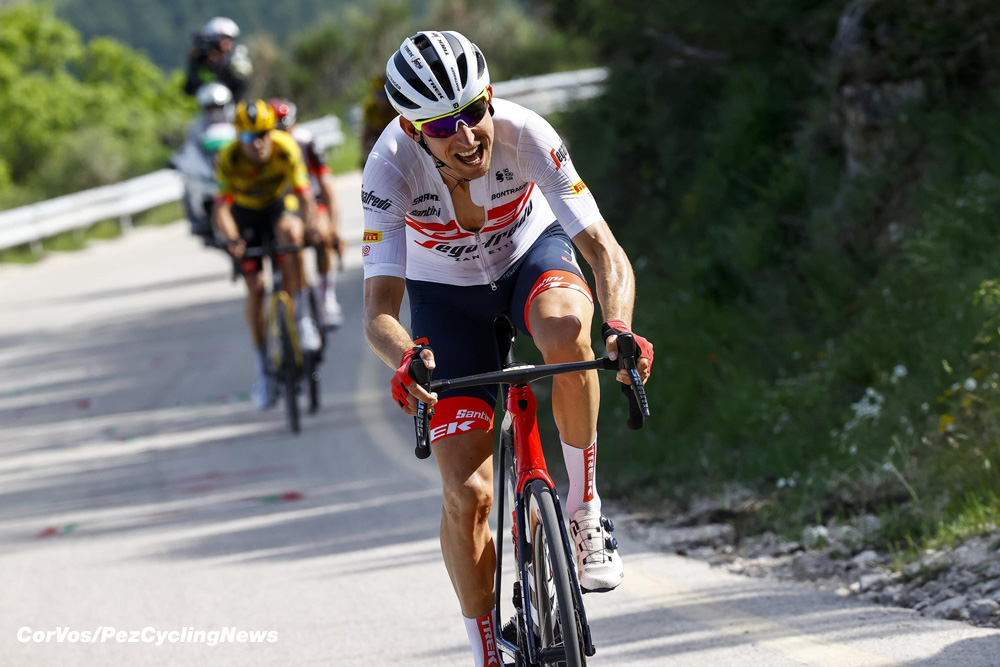 The GC riders lifted the speed on the last climb and crossed the finish line almost 3 minutes after winner Bouwman. It was mainly INEOS Grenadiers, the team of Richie Porte, Richard Carapaz and Pavel Sivakov, that had controlled the second half of the race. Juan Pedro López kept the pink leader’s jersey. 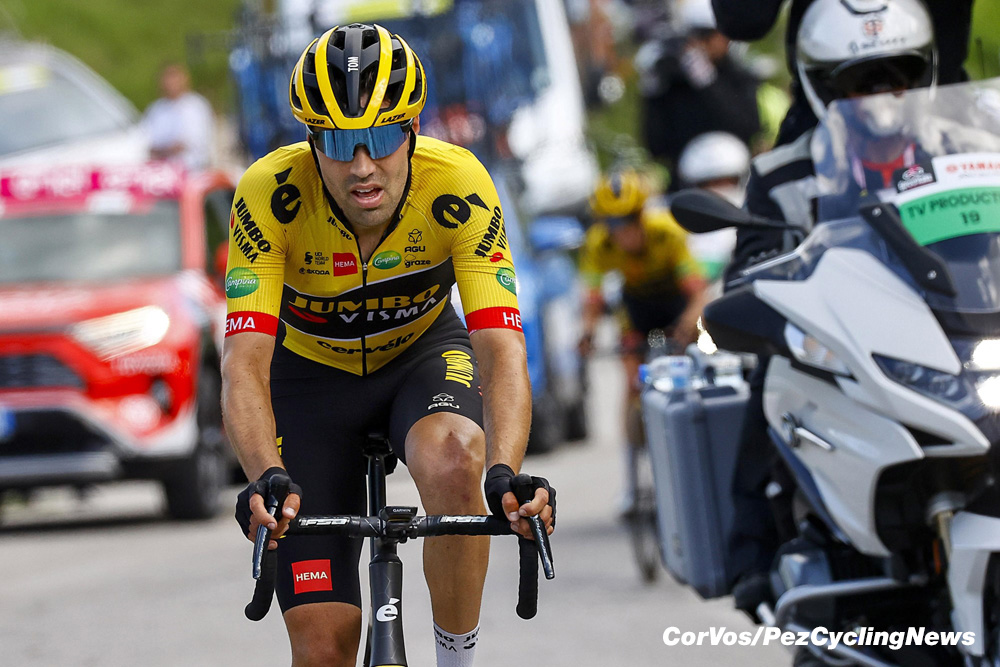 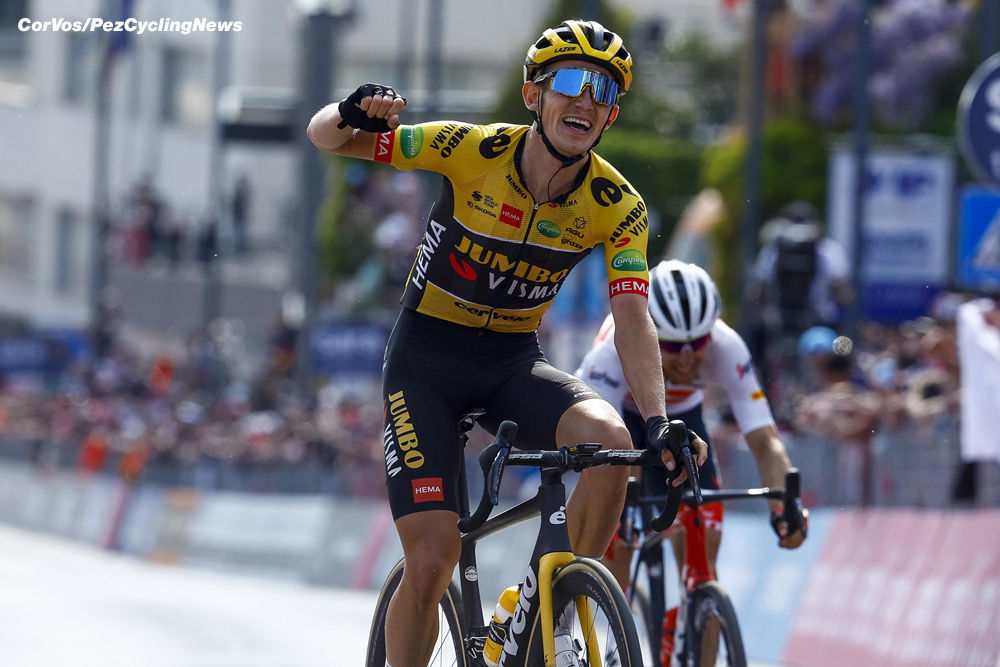 Stage winner and KOM, Koen Bouwman (Jumbo-Visma): “It’s unbelievable. This is only my second pro victory. It feels the same as in the Dauphiné five years ago. I’ve been in trouble on the climb but I came back. I got great help from Tom Dumoulin in the last 2km. I was confident that I would win the sprint but I didn’t expect the finish to be that steep. After the disappointment we had at Mount Etna, we decided to chase stages and that’s what we did today.” 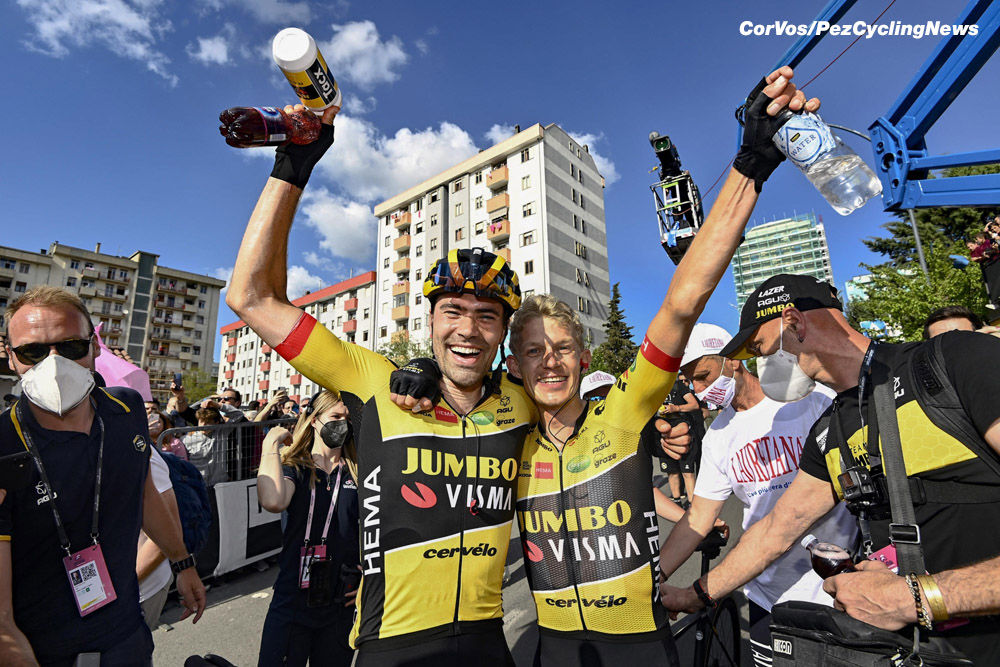 Dumoulin and Bouwman happy at the finish

Maglia Rosa, Juan Pedro López Perez (Trek-Segafredo): “It’s been a perfect scenario to have my team-mate, Bauke Mollema, at the front. I had a bad moment at the beginning with a flat tyre but my team brought me back to the bunch. I gave 100% to defend the Maglia Rosa again today.” 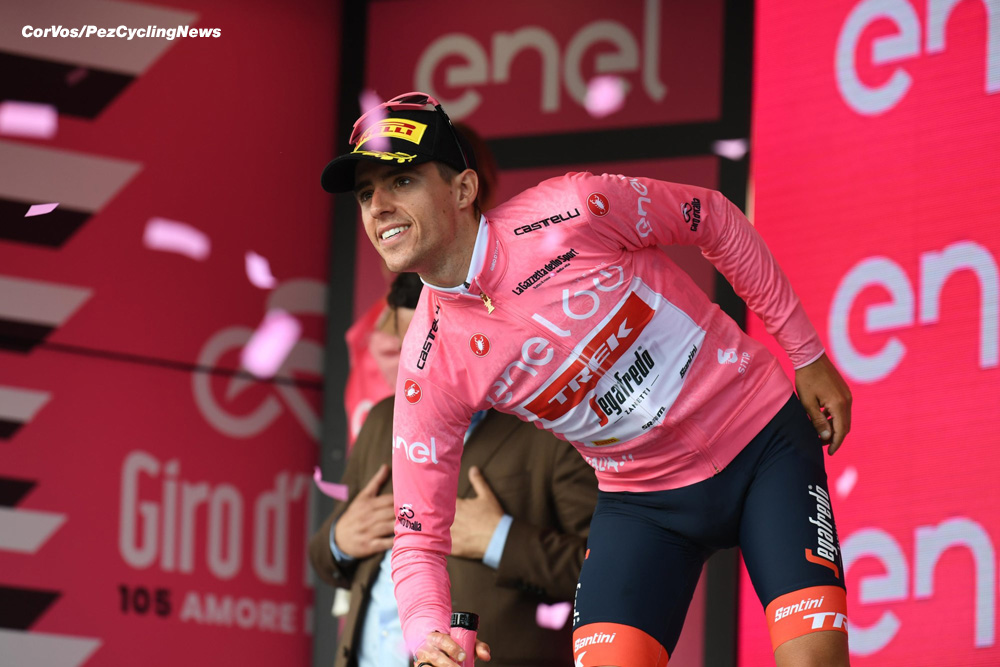 # Stay PEZ for a weekend of Giro action. #