The Cima Coppi will be atop the 2,758-meter Stelvio. This edition’s Wine Stage will be the Individual Time Trial of the Prosecco Superiore from Conegliano to Valdobbiadene – an area that has been part of a Unesco World Heritage site since 2019. 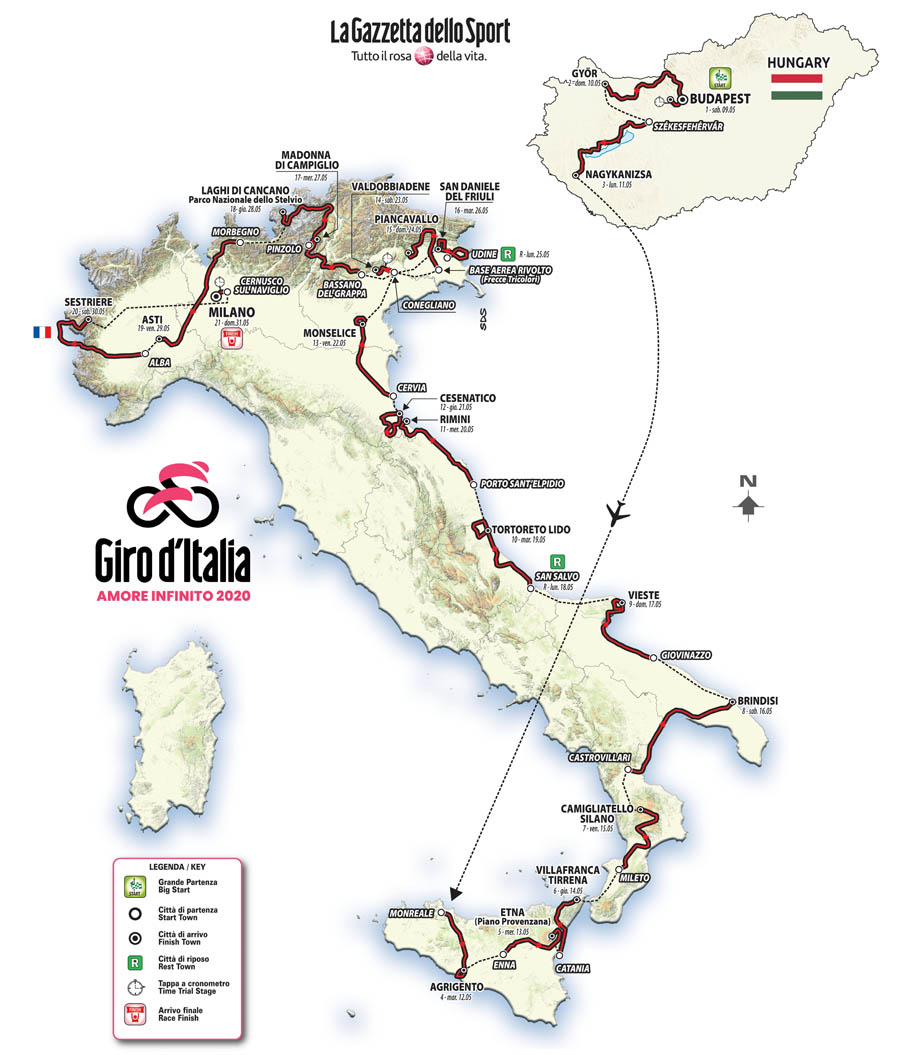 For the first time in the history of the Corsa Rosa, a stage will start inside a military base, from Rivolto, home of the 2° Stormo dell’Aeronautica Militare (2nd Wing of the Italian Air Force). An important year for the Friulian base: 2020 will celebrate the 60th year of the PAN (Pattuglia Acrobatica Nazionale; National Acrobatic Patrol) and the Frecce Tricolori.

The stage finishing in Rimini will commemorate the great movie director Federico Fellini on the centenary of his birth. The race’s total vertical elevation measures 45,000 meters. Hungary will host the 14th start from abroad for the Giro d’Italia; the first from an Eastern European country.

Twenty-one stages will be raced, first in Hungary and then Italy, from 9 to 31 May, to crown the winner of the Giro d’Italia. They will also showcase to the world’s viewers many UNESCO World Heritage sites, along with many other beautiful aspects of the Italian land, at the stages’ starts, finishes, and along the 2020 route.

The peloton travels from Budapest with its Castle district up to Milan with Leonardo’s Cenacolo di Leonardo (Last Supper). It passes through the second Hungarian stage with Pannonhalma Abbey and then to Sicily, with the Cathedral of Monreale, the Valley of the Temples in Agrigento and Etna; and on to Puglia with the Monte Sant’Angelo and the Umbra Forest.

Then it’s Emilia Romagna, where the race will touch Ravenna; Veneto, with the site of Arquà Petrarca and the Hills of Prosecco Superiore, and finally with the uniqueness of the Dolomites (through the three regions of Veneto, Friuli Venezia Giulia and Trentino Alto Adige) that have been UNESCO World Heritage sites since 2009.

The video of the Giro d’Italia 103 route

GRANDE PARTENZA FROM HUNGARY
The Giro d’Italia 2020 will start from Hungary on Saturday 9 May, with an 8.6km Individual Time Trial on the streets of Budapest, then two stages in the north of the country that are suitable for sprinters. The Corsa Rosa will then move to Sicily, where, on Tuesday 12, it will begin its ascent of the Italian Peninsula, ultimately heading towards the final finish line in Milan.

THE FIRST WEEK IN ITALY
The 136km Monreale-Agrigento stage will open the triptych of stages in the Sicilian Region.
Wednesday 13 May sees the first altitude finish of the 103rd Giro d’Italia with the Enna-Etna (Piano Provenzana, 1,775m) of 150km. A new climb, only partially climbed in 2011, is from the northern side (Linguaglossa) to reach Piano Provenzana.

On Thursday 14 it’s the last stage on the island, from Catania to Villafranca Tirrena before restarting on the following day, in Calabria, from Mileto and finishing after 223km – including the long final 22km climb of gentle slopes – in Camigliatello Silano.

On Saturday 16, the stage from Castrovillari to Brindisi is one for the group’s fast wheels. The ninth stage is a wavy one, especially in its final part, which will bring the peloton from Giovinazzo to Vieste, with a final circuit of 12.7km. Monday 18 will be this Giro’s first rest day. 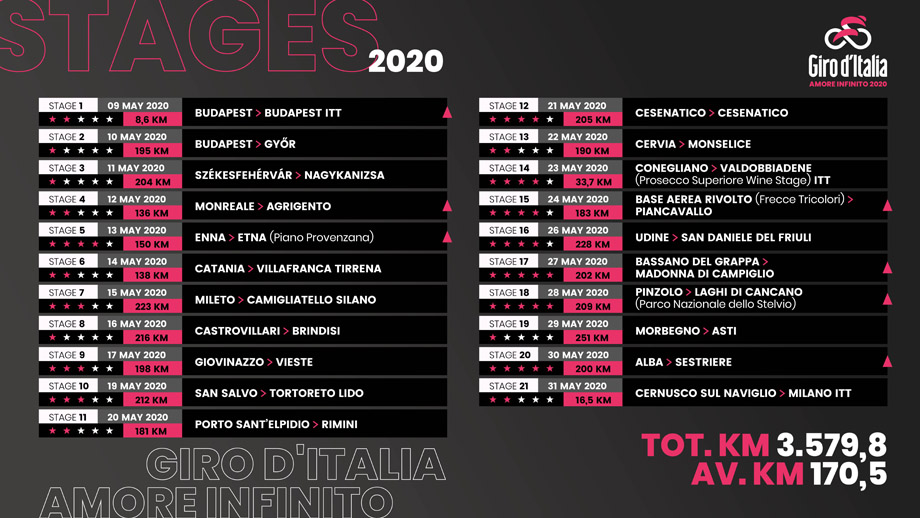 THE SECOND WEEK
The Corsa Rosa will resume with a wavy stage in Abruzzo, between San Salvo and Tortoreto Lido of 212km. Then Stage 11 will be raced between Marches and Emilia Romagna, on Wednesday 20 May, from Porto Sant’Elpidio to Rimini. The following day the action starts and finishes in Cesenatico on a challenging route that follows that of the Gran Fondo Nove Colli, now in its 50th edition.

We go from Cervia to Monselice for Stage 13; 190km that will bring the group from Emilia Romagna to Veneto where the Individual Time Trial from Conegliano to Valdobbiadene will be contested on Saturday 23. It’s a very demanding test against the clock of 33.7km (including, in the first part the hard, short climb of the Ca’ del Poggio) between the Prosecco Superiore hills that became a UNESCO World Heritage this year.

A key stage in the Corsa Rosa will start from the Rivolto air base, home of the Frecce Tricolori, on Sunday 24. The finish is in Piancavallo – which will also be the Montagna Pantani – after having climbed Sella Chianzutan, Forcella di Monte Rest and Forcella di Pala Barzana. Monday 25 is the second and final rest day, in Udine.

THE THIRD AND FINAL WEEK
The Corsa Rosa enters the final and decisive week with a stage raced entirely in the Friuli region. It departs from Udine and finishes in San Daniele del Friuli, with Monte Ragogna at the end – to be climbed three times – included in the two 27km circuit laps.

On Wednesday 27 May the action will start from Bassano del Grappa and finish in Madonna di Campiglio after 202km. The stage includes more than 5,000 meters of climbing with the unprecedented Forcella Valbona, plus Monte Bondone from the Aldeno side and Passo Durone before the finish line.

The 18th stage from Pinzolo to Laghi di Cancano, with its unprecedented finish, in the Stelvio National Park will be one of the hardest of the Corsa Rosa. From the start the route heads uphill to face Campo Carlo Magno, then Passo Castrin and the Passo dello Stelvio (Cima Coppi) from the Prato allo Stelvio side. After the descent, the climb to the Laghi di Cancano is attacked straight away. Friday 29, from Morbegno to Asti, is the longest stage of the 103rd Giro at 251km, and probably the last opportunity for the sprinters.

Stage 20 from Alba to Sestriere (Tappa Bartali) will be breathtaking. It starts immediately with the route going up towards the 2,744m Colle dell’Agnello. The route will cross the French border to face the Col d’Izoard then return to Italy from Monginevro to face the final ascent of Sestriere from the Cesana Torinese side.

The Giro ends on Sunday 31 May with the Individual Time Trial from Cernusco sul Naviglio, 2020 European City of Sport, to Milan, in Piazza Duomo under the Madonnina. It’s a flat 16.5km ITT to close this 103rd edition.

# Stay tuned to PEZ for the full review coming soon. #