He’s the man with one of the toughest jobs in pro cycling – outside of riding the strade bianche – the link between the riders and the ‘gentlemen of the press.’ The team press officer. One of the biggest budget, most glamorous and slickest outfits around is Italy’s Liquigas ‘squadra.’ Their ‘man in the middle,’ Paolo Barbieri took time to talk to Pez at the stage 9 finish in Cava de’ Tirreni.

PEZ: How did you get into pro cycling media work, Paolo?
I was a football journalist in Bergamo then three years ago I got a job with a cycling press agency; after that I worked for the Tirreno-Adriatico race and at the end of last year I got the job with Liquigas. 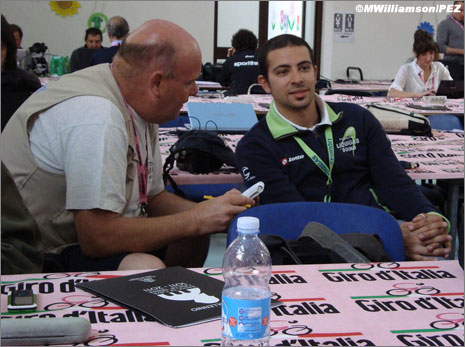 PEZ: Tell us a little about Liquigas, the company.
It’s big company which pays a great deal of attention to marketing and communications. Liquigas Sport owns the team, there’s no management company between the team and the rider, like at Riis cycling for instance.

PEZ: Why cycling?
A large part of the Liquigas market is people in small towns in the mountains who cannot get connected to the main gas distribution system and must use liquefied petroleum gas (LPG) to cook; newspaper and TV doesn’t do a good job of communicating with them, but to have the team travelling around Italy is an excellent way to spread the brand.

PEZ: Which is more important, the Tour or Giro?
The Giro, absolutely – that’s not to say that other races around the world aren’t important but we’re an Italian company and Italian races are priority. 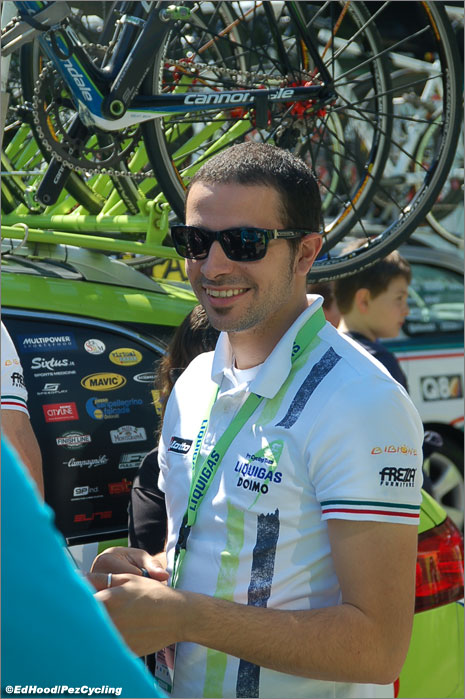 PEZ: How do you measure the effectiveness of the team as a marketing vehicle?
The formula is that for every four million euros you invest in a team, it should generate 22 million euros worth of marketing value. We have an agency who monitors everything; they take all factors into account – number and size of photos, number of times the name appears and so on, then they apply a mathematical formula which gives us the values.

PEZ: In this Giro, Nibali and Basso – two captains?
The leaders know Liquigas want to win; we come with two captains because if Basso crashes out after three days, what then? Riders know that in high level cycling it’s the team that counts. But of course it’s important you have good directors who explain to the riders that they’ll all get their opportunities, it’s a long season, from January to October.

PEZ: Were you happy with Ivan Basso’s 2009 season?
Yes, of course, the man came back because he needed to race and we were happy to help him. He won Trentino and was fourth in the Giro and Vuelta. But it’s not just his palmares, it’s his character – he’s a guide to riders like Nibali and Kreuziger when it comes to strategy. Sometimes young riders race with their feelings and not their heads!

PEZ: You have Kiserlovski and Agnoli both well up in the young rider competitions – is that a goal?
No, they are here to support their captains; their role is not to win the ‘giovani’ competition for best young rider but to ride for Basso and Nibali. But their DS has explained to them that if they are in the front groups with their leaders then it is possible that one of them can win the giovani jersey. 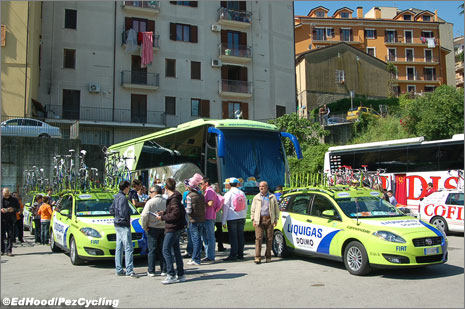 PEZ: What’s your favourite part of your job?
Speaking to the riders and DS’s to get their quotes for the journalists. Sometimes they may be tired or disappointed and only say a few words, but I know what they mean and can put that across to the press. But Nibali is different to Basso and you have to understand how the different riders think.

PEZ: And the least favourite?
The pressure – you are between the team and the journalists. The journalists want quotes, but maybe someone has crashed, they’ll say, ‘I crashed! what else is there to say?’ Sometimes I have to take five or six words and make that into a statement. 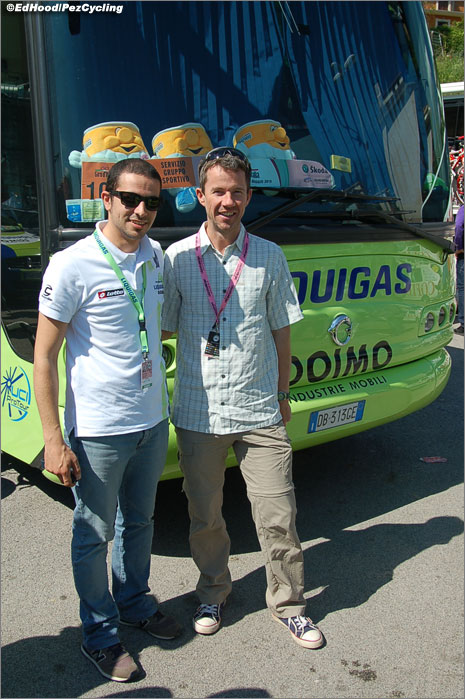 PEZ: Liquigas won the Giro TTT in Sardinia a year or two ago, and again, this year – why so good at this discipline?
Attitude! Before, you asked me about how to manage a team which has Basso, Nibali, Pellizotti and Kreuziger – all the riders know that it’s the team that counts. We prepare thoroughly for these races, we start work in December with individual time trial training then testing on the velodrome – but it’s motivation, strength and listening to their director that makes them ride the way they do. There was not one minute that their Director was not speaking to them on the radio.

If it’s a drag, put Szmyd on the front, for the flat Sabatini and Vanoti. He was telling them about every bend, every thing that was coming up. We took no risks in the rain and it was a huge joy for everyone to win, that day. With the whole team on the podium it’s like a family celebration.

PEZ: What’s the latest on the Pellizotti situation?
We’re confused, the team has a policy of clean cycling – Beltran paid the price of not observing that. Why did the UCI wait until so late before they told us about the situation, it’s an issue from last year? We had to draw Vincenzo Nibali in to the team at the last minute; he was preparing for the Tour, not the Giro. Leaving it so long before notifying us was very damaging to our preparations for the year.

Then there’s the medical aspect, our team doctor is not the sort of man who would give his support to a rider if there was any doubt about a situation – he has given his full support to Pellizotti. We don’t understand why the UCI don’t give us full answers on this aspect – we’re still waiting.

All of that said, we’re supporting the rider at the moment because everything indicates that he’s a clean rider, but if it became a situation like Beltran then there would be no hesitation in acting.