Let’s just call this the Sorbet Stage because it cleans the palate between the hard first courses of Zoncolan and Plan de Corones and the other major mountain meals to come, like the Mortirolo. Though it is unlikely that Passo Palade will be a decisive stage, it will most likely confirm who won’t win. Here’s our close inspection of this unsung Tyrolean climb. 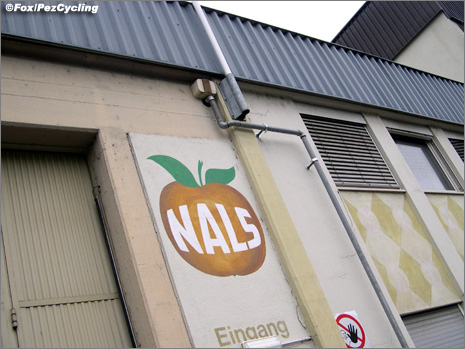 The climb starts in Nalles – famous for apples and… that’s about it.

The First 5km
Looking at the data, this ride doesn’t seem too hurtful: 19km, 1250m elevation gain, average of 6% with a maximum of 16%. Combine this information with watching professional cyclist effortlessly flying up these passes on the TV and you’d never imagine how wrong these “facts” can be! Trust me. 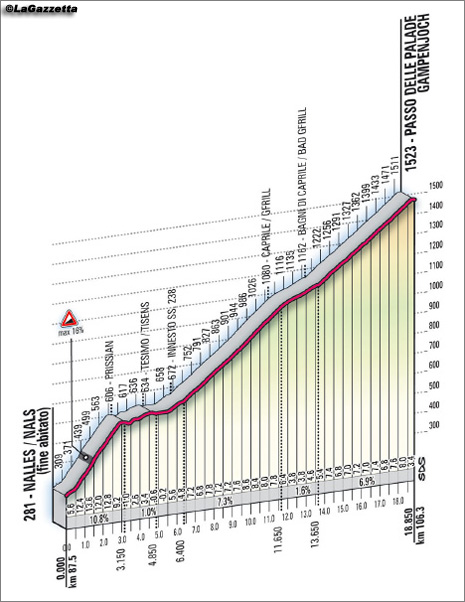 Hey this doesn’t look so bad.

I will admit that even though Passo Palade is in my own backyard, I’ve never climbed it… well, not from the side featured in this year’s Giro. I usually climb it from the Mendola / Fondo side and instead descend it. There is a very good reason for doing so: the first 5km of Passo Palade are depressingly hard. The signs state 14%, but there are plenty of sharp spikes, the 4 switchbacks are nasty traitors that offer no respite and the traffic on these lower parts is dangerous. 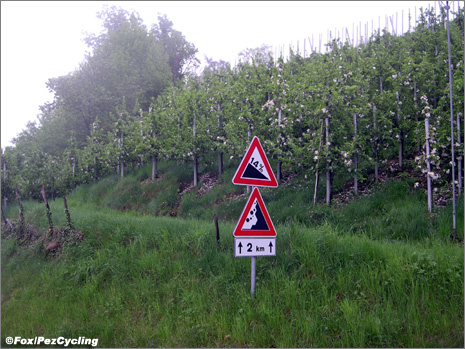 Get ready for climbing right from the start. 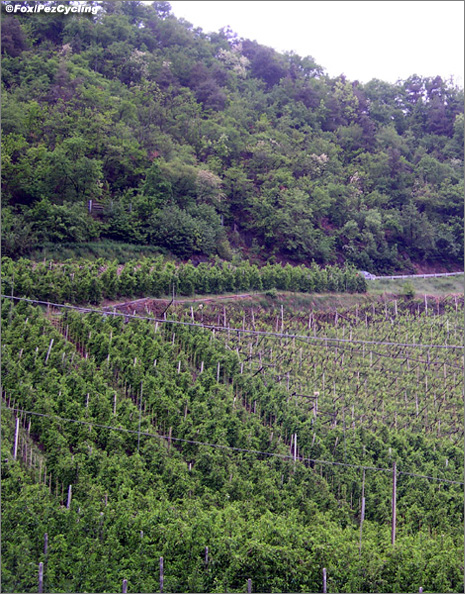 All of this bad news starts almost immediately after arriving at the town of Nalles. The idyllic apple orchards and farmers driving tractors and typical Tyrolean houses with wooden roofs give way to a sharply pitched up street. Oh my golly! It’s one of those, I didn’t think climbing was going to be so hard kinda slaps in the face / kick in the groin / maybe I don’t have the form today and should turn back type deals. Whoever planned the mountain roads in South Tyrol must have decided that 7 – 8% is the right elevation gain, because almost all of our passes seem to follow this logic. However, the guys in Nalles obviously didn’t get the planning brief. 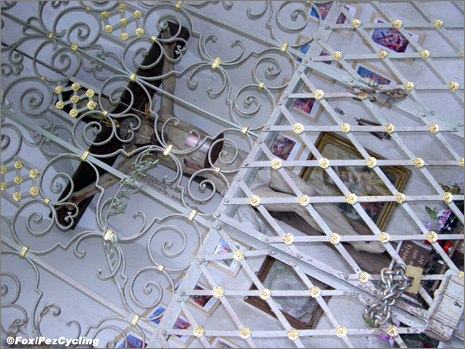 Little wonder that there are a number of roadside chapels: prayers are very welcome here.

Today is cold and gray, and another reminder that this was a long winter. The Giro starts in less than a week and we could very well get a snowy mountain stage (though the organizers would probably shorten/re-route it). The orchards give way to vineyards. The vineyards give way to forests. Small farms are sporadically mixed in. Sheep and sheep smells and clanging bells. The low cloud cover and rolling fog keep me on the look out for Hanzel and Gretel. 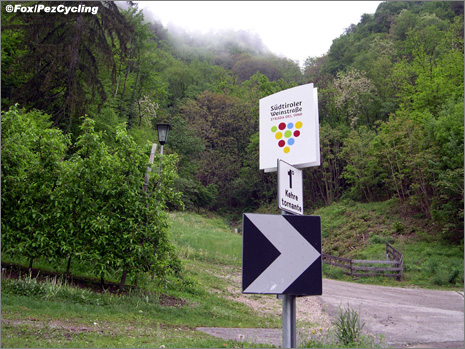 No time for wine, these switchbacks are calling.

Nalles isn’t very pretty, but Prissiano is. There’s a castle and a cool old church and if this climb wasn’t so damn hard I’m sure I’d appreciate it even more. Instead it serves as the halfway marker in this pain factory. The next town, Tesimo is even cooler with a wooden, covered bridge in the center. Quaint, picturesque. I didn’t even bother to take photos, yep, that bad. But we’re almost there, one more kilometer. 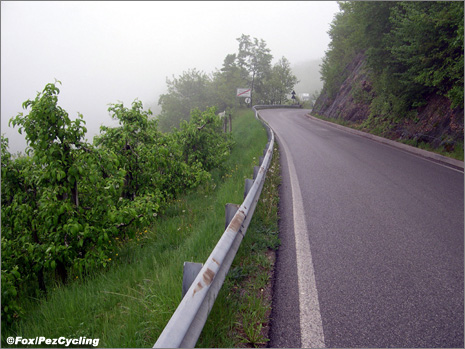 Up. Into the mist.

The Next Climb
The actual climb really begins here: this big curve in the road that features a gas station and a cafй (it’s the bottom floor of the owner’s house). Time to get a coffee and chat with the locals. I mention that I’m writing about Palade, er… actually everyone up here is German speaking, so maybe we should start calling it Gampenpass. 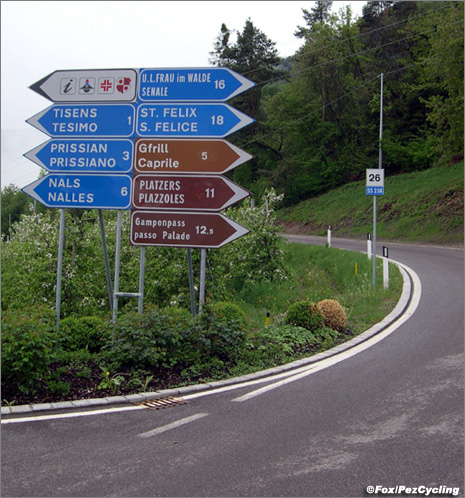 Now the Tyolean climbing can begin. Ask Cassani about this curve.

The gas station attendant asks me if I’m with RAI because they sure thought it was funny watching them film “that poor guy that had to ride his bike up the curve in front of the sign about 10 times before they got it right.” I think they’re talking about Davide Cassani and his stage previews. By the way, the gas station guy’d never heard of PezCyclingNews. Unfathomable, yet true! 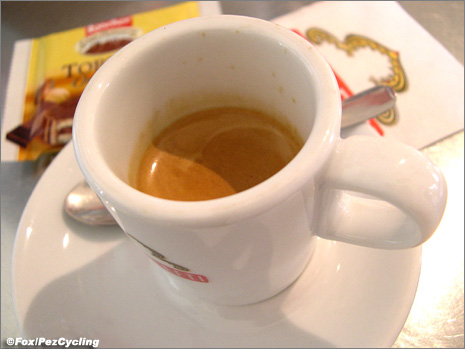 The next 12km to the summit is the classic South Tyrolean climb. The roads are well kept, there’s plenty of space for cars and cyclists and the pitch never exceeds anything unreasonable. Now we all love to poetically revel in suffering and pain (it’s part of the cycling journalist’s manifesto), but the reality is that I don’t. I like climbing, I like the peace and solitude and beauty and the views. Yet, the only view one gets while suffering is the pavement ahead. I watched the legends of the Giro (can’t remember the title) on the TV the other night. A reporter asked Pantani why he rode so fast, so hard in the mountains even when he didn’t need to at times. Pantani answers, “to get the agony over with sooner.” 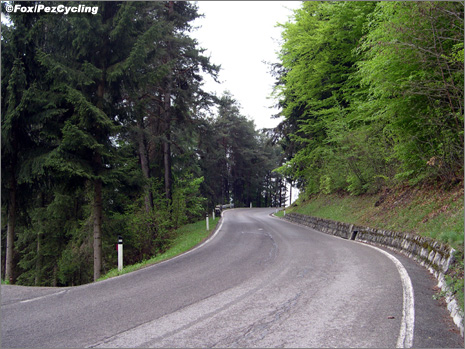 Back to normal climbing.

Sidebar: The Legends on Italian TV
These shows come on every year right before the Giro, constantly recycled content with some additional footage and a new interview or two. It always begins with Ganna and Binda. Lack of film and all witnesses dead keep this part brief. Then about 2/3’s of the show is about Bartali and Coppi, there is a little bit of Magni here too. The heyday of cycling, its popularity much greater than soccer. Then Gimondi wins everything for a year or two until the arrival of… Merckx.

Then the program tackles doping, but this year is different. They start with Eddy, showing him crying, crying like a baby and saying “I never, never took anything.” Then, he gets reinstated in the Giro – that’d never happen today. Then there is an interview with Coppi, where he talks about the amphetamine cocktail called La Bomba. He states that everyone, even those that say they don’t, take La Bomba. 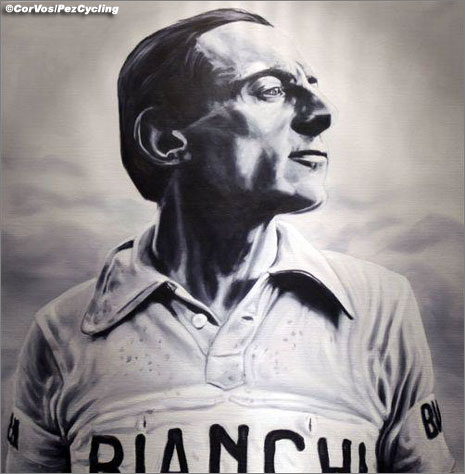 I was blown away. I usually turn these shows off by this point, but this one had me. I couldn’t wait to see how they’d handle the last of The Legends. All Italians (even Pez’s own Ale) have an unconditional love for Marco Pantani that allows them to forgive all his transgressions. While the program pins doping on Coppi and Merckx, it amazingly dodges the issue when featuring Pantani. Yep. At that point, I turned it off. 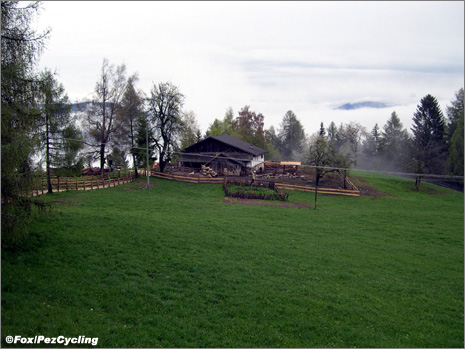 Hansel and Gretel stepped out for a walk.

Back to Work
Ok, I lied. There are some spikes in this 12km road into the double digits. But these are the kind that one can easily excuse saying, “well dear, at least we’re gaining elevation a lot quicker.” And around the next corner the road eases back down into a fine 7% grade. There is a light drizzle. The air is getting colder as one travels towards the 1500 meter passo. The views are also filling up with clouds. Those last few hundred meters, then… 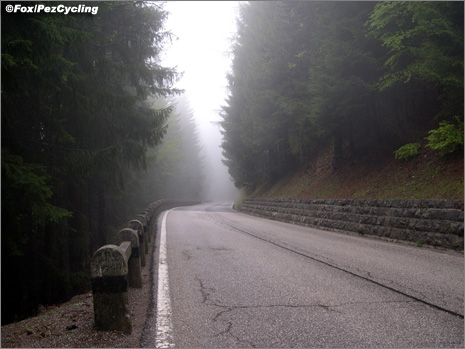 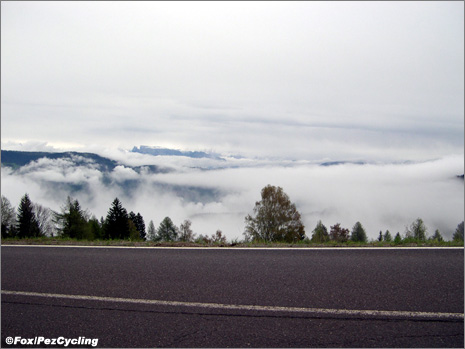 I’m in it for the views, even mystic ones.

The Anti-Arrival
The way to finish off a challenging climb, the icing on the cake, is a majestic view in the splendor of nature with a quaint little bar for refreshment. That’s my idea of a just reward. Yet so many climbs finish with a circus sprawl of bars, gift shops, parking lots and fat tourists that destroy the view and the endeavor. Stelvio being a glowing example. Other climbs end on a whimper, no views but discreet development, Mendola comes to mind. Gampenpass is an unfortunate exception: no views and no development aside from an unimpressive bar hemmed in by trees. It’s almost hard to believe that you’ve made it, the brown sign being the only indication. Congrats! 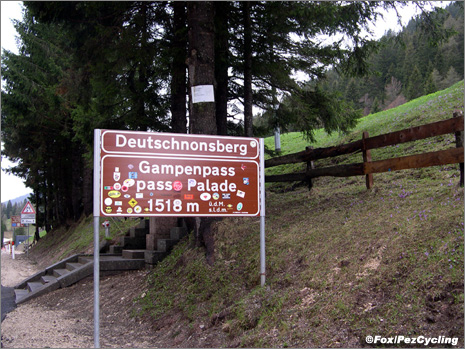 Giro Analysis
So what does the Passo Palade mean to the 2010 Giro? Not a whole lot. The arrival in Pejo is too far off for this climb to be decisive – though if the contending teams aren’t motivated, it’s possible that someone like Pozzovivo from Colnago CSF could attack and win from here [note: he looked very strong in the Giro del Trentino, dropping Ricco’]. Plus I think that after the first two brutal mountain stages, this one will be treated more like a transition one – there is a lot more climbing ahead with mountain top finishes for any of the potential leaders to risk anything on this stage. At best, this race that we’re calling The Cleansing Sorbet will show us who can’t keep up with the leaders. 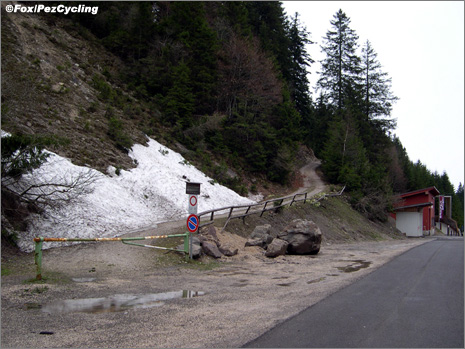 Not much to look at here.

A more interesting question is: why hasn’t the Giro climbed any of the notable mountains in this region for the past two years? The Giro del Trentino climbed Mendola to Pejo last year and this time the Giro does Palade to Pejo – both very similar ride profiles, both starting from Brunico. Well, if something smells fishy in Italy, it most likely is. There must be very good political and financial reasons why famed passes like the Sella Ronde are being avoided. Feel free to conjecture, it’s a fundamental part of Giro Talking in Italy.

In any case, my money’s on Pozzovivo, who will probably be in the green jersey by this stage.