Here we are again, the start of the first Grand Tour of the year; the 93rd Giro d’Italia. In three weeks time it all ends in Verona with a time trial, but today we kick off with stage 1, an 8.4 kilometre test against the clock in Amsterdam and what a stage! A battle royale between Millar, Wiggins, Evans, Vino and…Bookwalter!

Cronometro Individuale
8.4 kilometres around Amsterdam on, as you would guess, flat roads awaits the riders, you can’t really call the canal bridges climbs! The course’s lowest point is at 3 metres altitude, rising to 8, the difficulties are the technical corners just after the start in the Museumplein and then at Amstel, but after the Weesperstraat there are some long straights with a handful of sharp 90є bends before the finish at the Stadionplein.

Il Corridore
First man off was Team Milrams Matthias Russ and fellow German; Andrй Greipel the HTC sprint ace will be last off the ramp, he has a bad stomach so don’t expect too much from the big guy today. The most interest will be focused on the group of riders in the last half hour with Bruseghin (Caisse), Millar (Garmin), Wiggins (Sky), Basso (Liquigas) and Evans (BMC) all starting within minutes of each other, with Wiggins chasing his countryman, Millar, for 2 minutes.

Processo Alla Tappa
As always Italian TV covered every pedal stroke from the first man off, mixing in some great old film. My favourite has to be the duet between Bartali and Coppi, not in the mountains, but singing; Bartali wins by a mile! 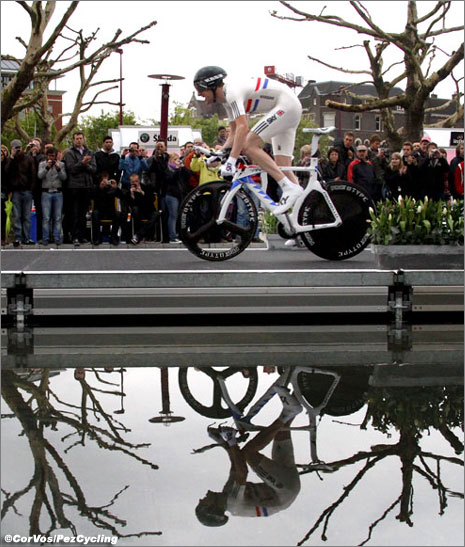 The Early Riders
First problem of the day goes to 3rd man off; Robbie McEwen (Katusha) as he pulls his rear wheel across in the first meters and has to stop for adjustments. Matthias Russ completed the course in 11:03 under dark skies and a light drizzle that made the road a little slippery. Sebastian Lang (Omega) raised the bar with a time of 10:48 and caught his minute man, Blot of Cofidis, but with 198 riders there were many changes on the leader board before we were done.

The “Little Prince” Damiano Cunego put up a fairly below average time of 11:10, much slower than the current leader; Andriy Grivko (Astana) with his time of 10:31. Saxo Banks other time trialist (not Cancellara); Gustav Larsson moved himself into the lead, 10:25 from the Olympic silver medallist. Then Pez fave Dario David Cioni (Sky) came up with a great ride to put him in 3rd position (at present) in 10:51. Well wrapped up against the cold at the finish, he was reasonably pleased with his time and pointed out that “it is only the start of a three week battle!”

The Mid-Section
Italian TT champ; Marco Pinotti (HTC) looked fast and probably would have been much faster than his 10:27 if the rain had not started again making the road very tricky, that must have cost him the 2 seconds he lost to Larsson, but he did push the tall Dutchman Tom Stamsnijder down to third. Old stager, Gibo Simoni (Lampre), seemed happy as he launched himself into the rain for what must be his last Giro; his time of 11:14 was good enough for a rider who isn’t supposed to be going for the overall.

Georgia resident, Brent Bookwalter (BMC), stormed across the line to be surprise leader a good 5 seconds faster than Larsson, his task was aided a bit as the roads were drying out, but no question: a huge ride for the young BMC rider. Jos Van Emden (Rabobank) put up a time of 10:27 for 3rd as one of the favourites for the overall; Vincenzo Nibali (Liquigas) nearly crashes on one of the tight left hand bends and then again on a right hander, still a good time of 10:28. Greg Henderson (Sky) is the next to put up a great time to go second with 10:23.

The Top Riders
David Millar (Garmin) was battling round the course as Bradley Wiggins (Sky) kicked out of the start gate on a very different Pinarello, hidden brakes and a shaped seat tube around the rear wheel, the bike looked the business. Cadel Evans looked strange in normal BMC kit as we have only seen him in the rainbow jersey. Millar gave it all he had but was 4 seconds adrift of Bookwalter on the line, then to a big cheer from the Dutch crowd; Wiggins took a slim 2 seconds off the time of Bookwalter for the lead at 10:18. 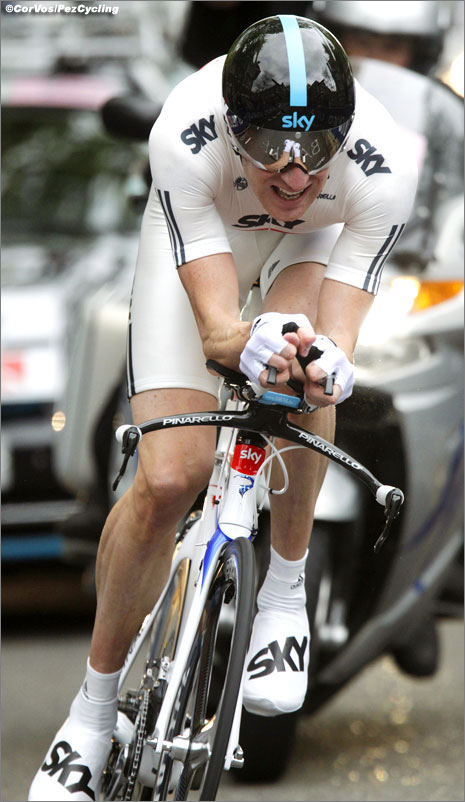 Cadel Evans runs Wiggins close and finishes with 10:20, then Alexandre Vinokourov (Astana) shows he has the form with a blistering 10:23 to put him in the top five. Past Tour winner; Carlos Sastre (Cervelo) has said he wants to win this Giro, earlier this week he told Spanish sports papers that it was his principle aim for the season. Sastre’s time of 10:43 wasn’t great, but he wasn’t so far off the pace. Richie Porte (Saxo) took 6th and young rider jersey.

Bonnet (Bbox), Mollema (Rabobank) and Griepel (HTC) all came in with times out of the top placings, so Bradley Wiggins took his first Pink Jersey of the Giro d’Italia. He said “the conditions didn’t worry me, I’ll take all the chances and if I crashed…but if this is my chance to take the leaders jersey, I’ll go for it!”

An exciting first stage, but loads more to come, catch up with our man at the Giro in Holland; Gordan for all the street level action.