From the west of Italy to the east, today’s 230km jaunt from Avellino – Bitonto was for the most part a rest day for the riders. Flat and straight, it was a simple day. Well, until the last 20 km when the peloton opened up a can of fast, and sprinter Tyler Farrar of Garmin-Transitions got his 2nd victory of this year’s Giro.

For a change, the riders enjoyed a good weather day today. You could say they’ve earned it after the horrific conditions they’ve raced under so far. The weather was calm, and so were the riders, as an almost nonchalant break of 3 containing Hubert Dupont (Ag2R-La Mondiale), Dario Cataldo (Quick Step) and Charly Wegelius (Omega Pharma-Lotto) slowly rolled off the front and kept a seemingly easy pace. The peloton was happy to let them go, giving them various time gaps through the stage, but never anything quickly insurmountable.

Right around the 17km mark, the escapees were done as the sprinter’s team wound it up on the front. Apparently Greipel was feeling better because the HTC-Columbia team was clearly working for him, keeping him near the front and safe. The Maglia Rosa of Astana’s Vinokourov also sat near the front tucked into his blue and yellow fold, safe and sound.

Another crash claimed a pile of riders at about 14km to go, but it didn’t look too serious as riders scrambled to fix wheels and bikes and remount. The real loser in that equation was Sky’s sprinter Greg Henderson, who had some teammates drop back to pace him up. Tough job at this juncture. At the front, it was all Garmin and HTC-Columbia controlling the business end of the race. Garmin clearly working for the points jersey wearing Tyler Farrar, and HTC for Greipel. Vino sat at the back of these trains, happy to let the sprinter teams do their thing and keep his nose clean of any crashes. 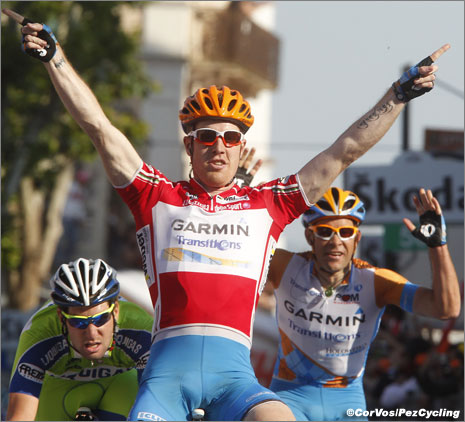 Under 8km to go, more teams tried to claim a little real estate at the pointy end, but HTC, at this time lead by Marco Pinotti, was clearly in charge. With Henderson moved up by Sky, Michael Barry took to the front to move the boys in black and blue up to the front. AG2R-Mondiale also was picking a fight near the front.

Saying “what the hell”, and hoping for a little joy for the yet winless host country, a Colnago rider went off the front for about 3.2 seconds, before the Liquigas boys took their place at the front. Even Basso was driving the pace at the front. Probably half-helping their sprint chances, and half keeping himself out of the argy bargy behind.

A sweeping left hand turn at 3.5km to go saw the front go from completely controlled to a veritable scrum of teams. Lots of yelling and gesticulating marked the front end of the group as the peloton behind tailed into a long, thin, single file line. 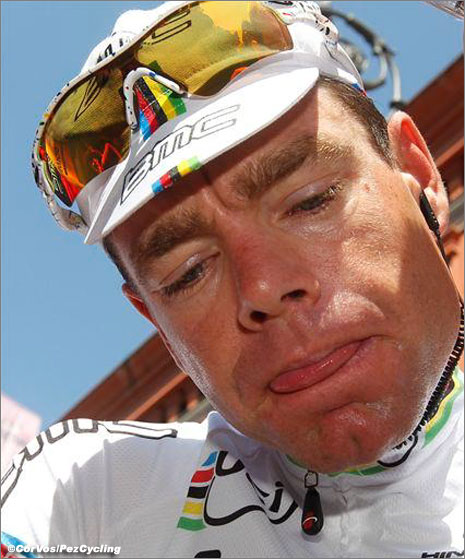 Sky again took to the front with a tucked in Greg Henderson obviously liking his chances. A few Milrams and a few Garmins also infiltrated the show. Katusha’s tiny Robbie McEwen showed himself at the front. All the sprinters were hoping for a shot at the line on this stage, tailor made for the fast men. 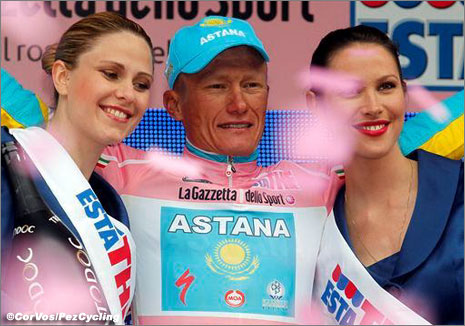 Vino is still on top.

Thin, twisty roads had the group strung out as a Quick Step rider kept the pace insanely high. Looking back, noticing whoever he was working for wasn’t there, he sat up, basically gift wrapping the last 500 meters for the Garmin sprinter Tyler Farrar, who came around his lead out man Julian Dean and took the win ahead of a hard charging Liquigas sprinter Sabatini.