After two pieces of mountain madness bread with a filler of rest day gone by, the beaten and weary souls of the 2010 Giro d’Italia were gifted an easy day, well, as easy as you can get for northern Italy.

The Giro’s 17th stage started in Italy’s northernmost valley, the Pustertal, in the medieval town of Bruneck. From there it was west then south toward Bolzano before hanging a right into the mountains and up the category one Passo Palade. After the Palade, it was rolling valley road all the way to the finishing climb to Pejo Terme. The climb to Pejo Terme is not even a blip on the radar compared to the the gradient of the last two mountaintop finishes, but it’s still a wasp in the collective jersey of the riders with the final 10 km clocking in at an honest 6% average 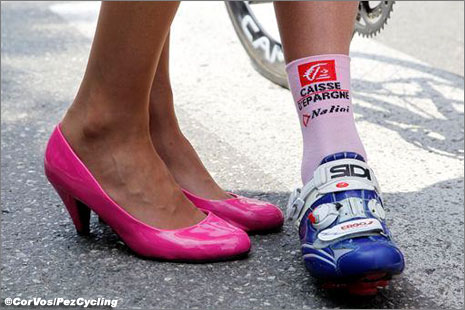 Of course Arroyo has some pink heels to accompany his pink socks, pink bike, pink helmet, pink everything. I think he might paint himself pink by the end of the week.

The day is classified as a high mountain stage with over 3000 meters of climbing, but it was no surprise to see the race taking this as a long, hard, easy day.

It took a long while for the race to get going. No one even bothered to attack for the first 10 km, but once they got going, they got going in earnest. The first 80 km of the day were more or less downhill, so the speeds were high, while the effort was low. It took until the end of the first hour before the break managed to pry itself loose. When it did, it did with conviction. 19 riders cruised away to enjoy their own mini-race on the day. The peloton looked relieved to have a nice, unimportant group roll away. The lights were dimmed, the piano was tuned, and a nap time coinciding with a piano session was the call of the next few hours. 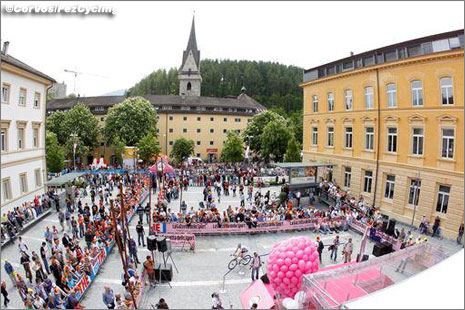 Lovely Bruneck. It’s not too far from Austria, it used to be Austria, and they still speak German there, so I’m going with the German naming of the town.

Of course, this should be tempered with the fact that after 80 km, the riders would have to take in over 3000 meters of climbing in the final 100 km, so no matter how sweetly that piano played, there was still a lot of suffering and unhappiness going on.

I’m going to grab the remote control and fast forward a bit here. Alright, here we go…there’s the field churning along, there’s the break churning along, there’s a big 19 km climb to tickle the knees, there’s a fast descent, some valley road, Basso chats, Arroyo looks, wait for it, wait wait, ah yes, resplendent in his Maglia Rosa, ok, more boring chatter to pass the day, and here we are, yes, let’s take up the tale again with 25 km to go.

The break is rolling along merrily with 15 km to go until the start of the final climb, all is well in our mini-race of 19 riders, but of course someone had to ruin the pleasant peace, and of course it was none other than Aggressive’s best friend, Mikhail Ignatiev. Ignatiev is still a young rider, but his palmares is already impressively broad. He doesn’t quite have the reputation of a Jens! when it comes to aggression, but give him another ten years, a charisma lift, an injection of humor, and he’ll be right there with Jens! 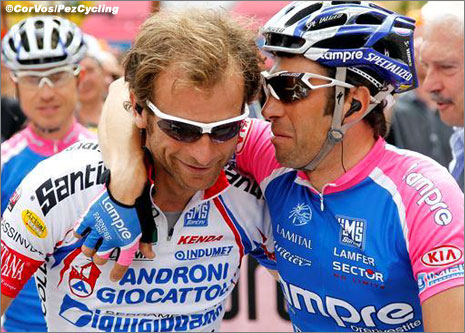 This picture doesn’t fit here at all, but that’s ok. There’s always room for a picture of Gilberto Simoni trying to sneak in a lascivious groping of Michele Scarponi.

Not to be critical of Ignatiev, he’s just one of those quiet aggressors. We’re always looking for that attacking rider with that over-used French word, panache, you know?

Anyhow, the break didn’t blink an eye when Ignatiev rolled away. They smartly realized that Ignatiev is a pain in the liver, so he was allowed a solid 5 km of freedom, before being pulled back. Then it was time for Nicki Sorensen to go in search of his Grand Tour trifecta of stage wins – he’s got Vuelta and Tour de France stage wins already. And just like that, with a yawn (Ignatiev) and a stretch (Sorensen), the racing had begun in earnest.

Attacks went to and fro, left and right, up and down. The group stretched, split, reformed, repaired, breathed, then stretched, split, until finally there was a working group of Damien Monier (Cofidis), Steven Kruiswijk (Rabobank), and Danilo Hondo (Lampre). Two of the three (the first two) weren’t even slated to race the Giro until mere days before, but suddenly here they were, in with a chance at a career defining win.

Behind, the break was splintered all to hell, with many a rider doing his everything to get across to the leading trio. The leaders merely cackled with glee as the chasers beat the crap out of each other and never made a bit of headway in getting across to the land of success and plenty. 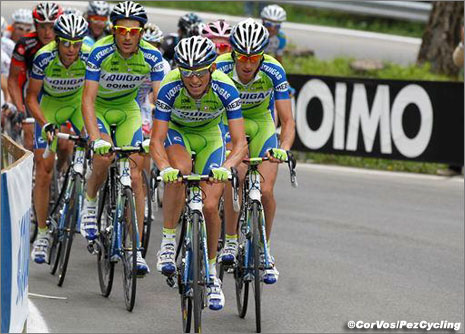 Arroyo’s Caisse d’Epargne team did the slow riding on the front today, while Basso’s Liquigas boys did the screwing, I mean the turning of the screws.

Steven Cummings made a promising move to make the journey from the land of desolate failure to the land of happiness, but he suddenly found himself stuck on his own island, some might call it purgatory. He wasn’t fast enough to make it to success, nor was he slow enough to wallow in the mud with his erstwhile companions. Numerous riders tried to leap out of their sad plights back in the chasing section of the break, but no one could make it to Cummings. It seems he preferred being a lone island, Cummings Island if you will. He did not wish to be an archipelago.

Eventually, Cummings was not given a choice, and Omega Pharma’s Daniel Moreno finally swam across to Cummings Island. From there, the two put their heads down to journey to the leading trio.

Unfortunately, it wasn’t to be.

The climb had begun in earnest, and the leading three had been cast to play out the stage’s finale. Danilo Hondo was his typical rigid, teutonic self, complete with stone cold stare and muscles flexing mightily in his arms to avoid any extra movement so as to give away the fact that he was going as hard as he possibly could. Then there was Rabobank’s Steven Kruiswijk, a picture of not Hondo. Kruiswijk is a proponent of a little known fact of nature – power output directly correlates to the angle of your outward pushing elbows. For Kruiswijk, this means a lot of power. The third breakmate, Damien Monier, is a disciple of the bob bob bob, rock rock rock. This is by far the most powerful of movements. It is a law of humanity that the more one bob bob bobs and rock rock rocks a rider is able to manage, the more violently he will proceed forward, and violent is fast, right?

Absolutely. The theory was proven as Monier bob bob bobbed, and rock rock rocked right on by his two unfortunate breakmates who had both chosen poorly in their search for more gusto to the pedals.

Monier lurched by the two and set about trying to yank his bars right off his bike, or if that didn’t work, break his cranks or downtube in half. When it was apparent that he wasn’t going to destroy his equipment, he aimed wide on a switchback and nearly rammed it head on. It was obvious that he was either going to win or go out with the played out excuse of mechanical failure or crashing. It was a solid plan – it was a win, win, win situation. If he won, well, he won, but if he crashed or broke his bike – he also won, because he’d have that perfect bike racer excuse: I would have won if it wasn’t for (insert excuse here).

Monier, however, was on fire, in fact he rode like it. He could barely keep himself in the saddle from all of the friction and thus ensuing flames caused by his sexual maneuvering on his poor, unfortunate saddle.

All jesting aside, Monier rode like a man looking to capitalize on an opportunity that doesn’t present itself all too terribly often. He attacked at the right moment, applied the proper amount of force to the pedals, and just like that – he was a Giro stage winner. 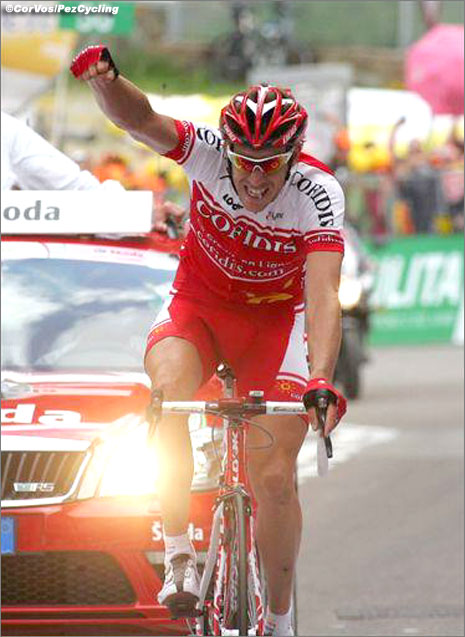 He looked quite happy on the podium afterwards as well. In fact, it looked like someone had just told him that he had been fired, his favorite stuffed animal had been burned, and his dog had run away…to Provence.

Monier might get the award for most depressed look on the podium I’ve ever seen.

Behind, oh about three days later, or about 10 minutes, whatever, the field came trucking up to the finish in Pejo Terme. The final 10 km of climbing did the number on everybody save the riders interested in GC it seemed. No one moved, no one did anything except for get dropped as Liquigas unleashed their hounds yet again and made life uncomfortable for all.

Coming into the final kilometer, it was none other than Vincenzo Nibali setting the pace and everyone else thinking, only 900 meters to go, only 800 meters to go, only 700, 600, 500, 400, 300, 200, ah hell, there goes Scarponi. Basso reacted with the force of a gentle spring breeze and made Scarponi look like Mark Cavendish. Scarponi picked up a few bike lengths on the line, but that was the extent of the GC battle for the day.

That’s all I have to say about that. 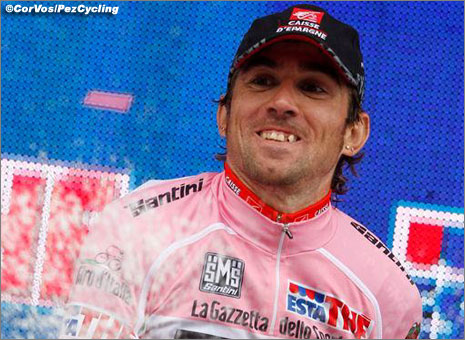 Arroyo survived another tough day and looks certain to take his Maglia Rosa to the Mortirolo on Friday.

I lost this whole report just before I posted it. So I just finished retyping it. I’m going to go throw my computer in the ocean now.

Tons of new pictures on the Flickr page. Have a look if you get a chance!