Yesterday’s Stage
As we all saw; Liquigas took the race by the scruff of the neck and put Ivan Basso in pink, but you have to be impressed by young Richie Porte and especially David Arroyo who faltered early on the climb of the Mortirolo and then came storming up the hill through the unexpectant team cars to shoot past first Evans and then a shocked Sastre and eventually Vinokourov to get within 40 seconds of Basso and friends. As Sastre commented latter “there was no understanding between us (the chasers), so time was lost.” He didn’t mention the tactic of the TV moto’s always in front of the Basso group, but always behind the pink jersey group!

Back in Spain Arroyo’s son, Marcos, was watching the stage in the cafй of a large department store in the Arroyo’s home town of Talavera de la Reina (Toledo) with his mother and family friends. David’s wife, Pamela, had much of her hair dyed pink at the Arroyo family hairdressers as she and Marcos were leaving for Italy to see “The Hero of the Town” on the podium in Verona. Young Marcos was heard to shout at the TV: “ЎVenga, papб, aprieta el culo!” roughly translated means; “Go, daddy, with the strength/speed of your ass!”

Today’s Course
There had been reports that the Passo di Gavia could be shut with amount of snow around the mountains, but the sunny morning told the fans it would be great day and the riders that more torture was on its way. As well as the Gavia there is the Forcola di Livigno (2315 metres), Passo di Eira (2211m), Foscagno (2291m), the Gavia (2618m) which is this year’s “Prima Coppi” as the highest point on the Giro and then the summit finish on the Ponte di Legno/Tonale at 1883 metres altitude…yip, 178 kilometres of torture. 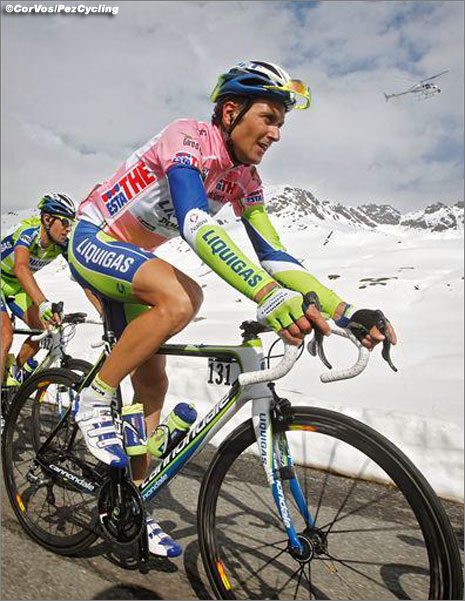 The Action!
An easy start was on the cards for the peloton before the long climb of the Forcola di Livigno after 38 kilometres, the Livigno is 35 kilometres long and rises nearly 2000 metres from bottom to top, Andrei Grivko of Astana had a little go off the front, but was back in the fold before long.

Danger-man in the group was obviously Sastre at 5 minutes and 32 seconds down on Basso, but by the top of Livigno he was only 1:27 in front, Matt Lloyd jumped away to take Mountain points as the race crossed into Switzerland with 108 kilometres to go to the finish, as you would expect Liquigas had all their men on the front and Vinokourov was between lead group and peloton, he suffers an untimely puncture but manages to catch the leaders. 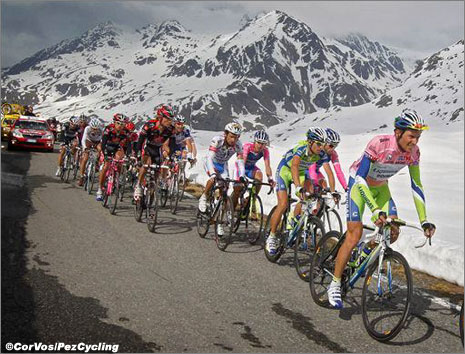 On the climb of the Passo di Eira; Matt Lloyd does most of the work with Wyss, Sastre and Vino, this whittles the lead group down to around 15 riders as the pink jersey bunch was in the region of about 40 riders, the gap froze at just over 1 minute.

Wyss set the pace for Sastre and the others until Matt Lloyd took off again for more points at the top, he was caught by the Sastre group on the descent as Basso was at 1:07 over the GPM line.

Next we had the Passo di Foscagno, Pirazzi (Colnago) attacked from the leaders at the base of the climb and is first over the top 50 seconds before Matt Lloyd, Sastre and co. then Basso, Evans, Arroyo and the other contenders at 1:45.

Cima Coppi
At the start of the Gavia in Bormio; Pirazzi was still on his own out front, 1:27 ahead of Sastre, Lloyd and Vinokourov and 2:30 in front of Basso etc. Liquigas had five riders leading Ivan Basso as Matt Lloyd led the chasers; he needed to get as many points as he could on the Gavia as he would be thinking he might not get any points at the summit finish in Tonale.

As the weather was so bad Italian TV had given up trying to show live pictures, Giro Radio were saying that Pirazzi was ahead of Vinokourov, Sastre, Lloyd, Moncoutie, Simoni, Pinotti and Tschopp at 1:20 with the others of the group dropped. The Liquigas/Basso peleton were at 2:20, but it was very difficult to receive any information, Paolo Savoldelli on the back of a moto was relaying something, although intermittently!

Simoni (Lampre) and Moncoutie (Cofidis) had a short time in the lead, but were caught by Sastre, Lloyd, Vinokourov, Pinotti and others on the Gavia, as was long time escapee; Pirazzi, the pink Jersey was at 1:27. Sastre drove the group as Vinokourov needed another wheel change, although he regained the other five before the top of the Gavia. Simoni wanted the “Cima Coppi” and attacked again this time to be joined by Tschopp (Bbox). Sastre, Lloyd, Vino and Pinotti chased behind with Basso now at 1:18. 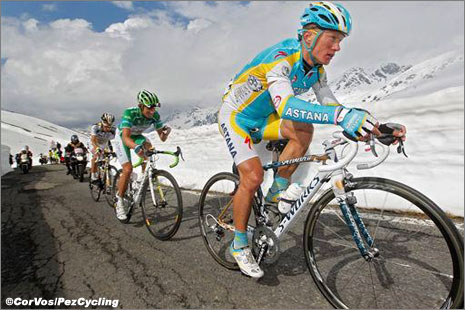 Tschopp attacked and then cracked allowing Simoni to close back to the Swiss Bbox rider. Gibo Simoni sprinted through the high snow banks to the line, but Tschopp got the better of him on the line to take the honours, Lloyd took third.

The Last Climb of the Giro’10
At the bottom of the Ponte di Legno/Tonale, Johann Tschopp was on his own 55 seconds in front of Simoni with Vino, Karpets (Katusha) and Righi (Lampre) between them and the Liquigas/Basso group, Matt Lloyd had been caught on the descent, Sastre and Pinotti were between Vino and Basso.

Basso still had two team riders with him; Arroyo was on his wheel followed by Evans, Porte, Cunego and Scarponi and around 20 or so riders. Vinokourov was the strongest in the three man group and rode Karpets off his wheel, Righi held him, but they were 54 seconds behind Tschopp at 5 Km’s out. Simoni, Sastre and Pinotti were back with the peloton, Simoni managed to take a TV interview as he went out the back.

Evans launched an enormous attack from the peloton to pass Karpets, Basso had Nibali, Arroyo (& 1 team-mate) and Scarponi. Evans then shot past Vino and Righi, while behind Arroyo can’t hold on to Basso. Scarponi has to chase Evans; this puts Basso in slight trouble, but not for long as he gets back on terms. 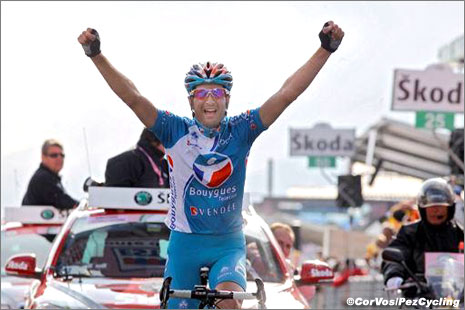 Tschopp keeps the pressure on and takes the win, Evans has something left and fights his way to the line with Scarponi and Basso not so far away. Arroyo is next just before Nibali and then a very tired Vino, Richie Porte, Matt Lloyd and all the others came in in ones and twos. Basso took more seconds from Arroyo and Evans moved to less than 1 minute from Scarponi.

The big question is; will the time trial tomorrow make any changes? Stay Pez to find out.