Race Report: Just like yesterday crashes were to make some decisive differences to the result today, cross winds played their part, but putting a hairpin bend in the last 2 K’s split the pack to ribbons. Evans lost out, Wiggins crashed, and Greipel didn’t have the legs. It won’t be popular with some people, but Alexandre Vinokourov took the lead by using his head.

Another dangerous day faced the nervous peloton on the 224 kilometres from Amsterdam to Middelburg via Zuidland on the flat coastal plain with lots of cross winds. At the start Alessandro Petacchi (Lampre) was wearing woolen gloves against the cold, but he was being tipped by RAI (Italian TV) as one of the favourites today, but with wind, rain and cold conditions forecast any predictions could easily go out the window.

The big subject at the Giro is how the race will get to Italy? With the Icelandic volcano doing its bit again, there is talk of the riders either going by bus or train and the possibility that the team time trial on Wednesday, between Savigliano and Cunego, will be cancelled to give the riders an extra rest day. 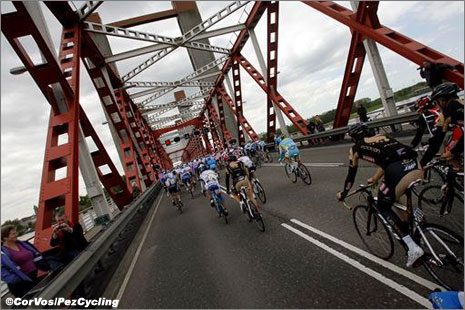 From the Gun
The first break went off the front while the race was still in the suburbs of Amsterdam, Jerome Pineau (Quick-Step), Olivier Kaisen (Omega) and Tom Stamsnijder (Rabobank) tried their luck and by the 50 kilometre mark had around 8 minutes advantage on a cautious bunch with Team BMC on the front for Evans in pink.

As the race passes through the outskirts of Rotterdam, after 80 kilometres, the gap had come down to six and a half minutes and then by the feed with 119 kilometres to go it was 5 minutes, but the sprinters teams of HTC, Sky, Garmin, Katusha and Lampre hadn’t started any sort of chase…yet! 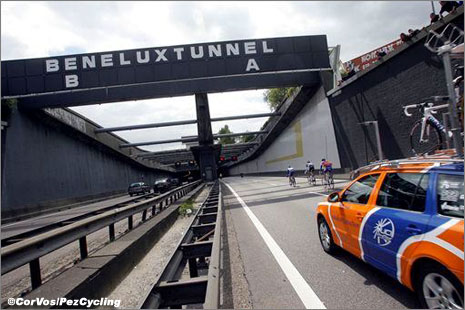 From Rotterdam the course heads out towards reclaimed land and the islands of Ouddorp and Burgh Haamstede before crossing the windswept dams and causeways to Domburg, this was a very dangerously exposed section, the three break away riders were pulled back into the fold as the race reached this pуlder area and the action was soon under way with attacks from Astana, which gave rise to two groups off the front and the “ Maglia Rosa” in the chase bunch at 50 seconds from the front. 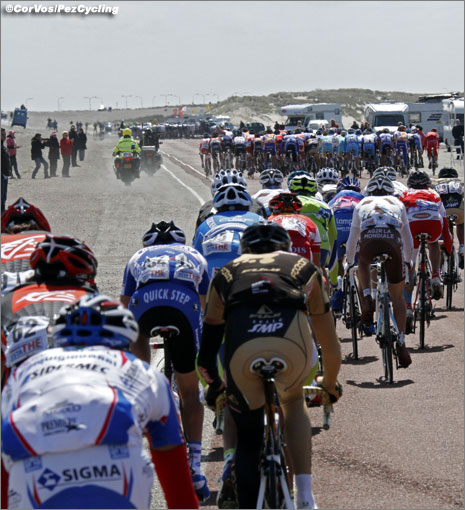 The Real Race Starts
With 60 kilometres to Middelburg, Damiano Cunego with three of his Lampre team-mates were in a sizeable group behind a Sky-led bunch as he had missed the bus. Colnago’s Pozzovivo was further back and was losing more time, within 10 kilometres they were over 1 minute behind. Cunego’s group was struggling to hold the bunch and they dropped to 30 seconds behind, the Little Prince’s “best friend” Gibo Simoni was up front and must have had a big grin on his face at this point! 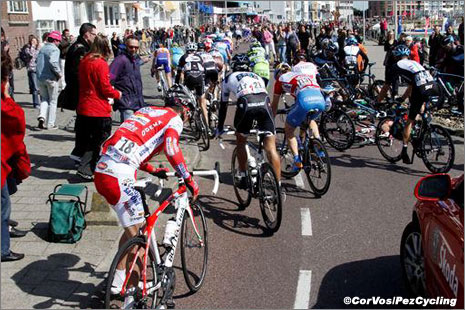 The bunch was in one long line as they went under the 40 to go sign, it wasn’t going to be Lampre’s day as Petacchi had to swap a rear wheel and fight his way back to the fast moving peloton. The Cunego group managed to catch the Evans bunch at Westkapelle (35 km out) as HTC took over proceedings up front for Griepel, a crash with Bruseghin (Caisse) and Vandevelde (Garmin) split the bunch again with riders all over the place with no time to take in the beach view. Vandevelde later abandoned. 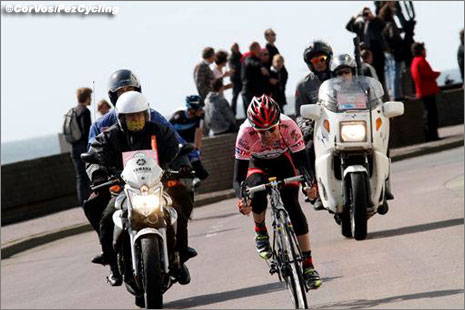 Evans chased alone just to reach the second group on the road, then he had to chase some more in hopes of getting to the front. No luck.

As expected the hammer went down as they rode along the beach front, HTC were still in charge with Astana keeping Vino out of harm’s way near the front, Petacchi had still not made contact after his mechanical, Sky and Liquigas were not making it easy for the big sprinter either by laying down a fast pace, Simoni had dropped back for Petacchi, a service he didn’t give to Cunego. 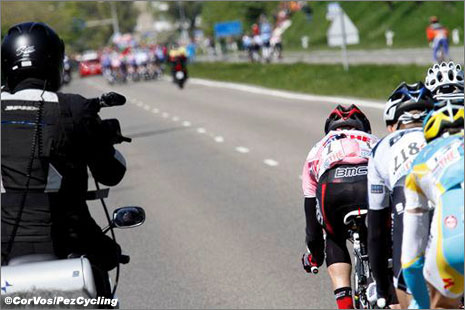 Cadel Evans drove the chase hard, but couldn’t reconnect with the front.

Last 5K
Dario David Cioni (Sky) kept the pace high, but on a tight left hand bend four Sky riders, including Wiggins, over cooked it and kissed the tarmac, at what was the trickiest point of the day, where the race crossed the harbour to make its run-in to the finish. This whittled the leaders group down to around 20, including Greipel, Basso, Vinokourov and Cunego; the others including Evans were 15 seconds behind with 6 kilometres to the line. 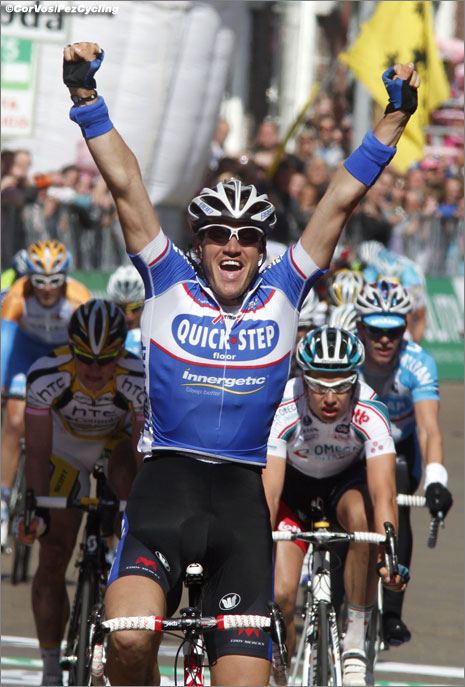 Evans tried to galvanize his chasers into action to save his pink jersey, but they started to attack each other. This played into the hands of HTC/Greipel who had 30 seconds lead as they passed under the 1K banner. After a perfect lead out from HTC, Goss took the last bend as Brown (Rabobank) and Weylandt (Quick-Step) came past swamping Greipel and not giving him a chance. Weylandt was by far the fastest and launched himself across the line. Young British rider Adam Blyth was 5th on the stage outsprinting Greipel in 6th. 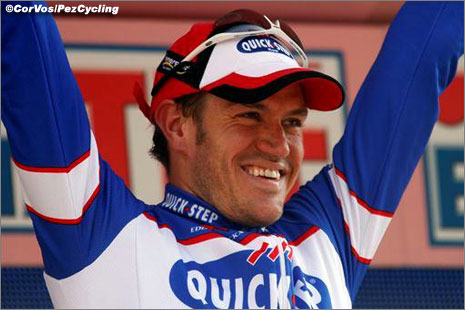 Wouter Weylandt has been criticized by his team manager, Patrick Lefevere, a fair bit this season. He responded in a huge way today.

As Alexandre Vinokourov (Astana) was in the front group he has taken over the pink jersey with our man; Ritchie Porte (Saxo) second in the same time and David Millar at 1 second in third. After the finish the Kazakh remarked “it wasn’t the plan for today, but it happened, it’s good to go into the rest day with the lead, and it means the team will be last off in the team time trial in Wednesday”. Cadel Evans came in 45 seconds adrift. 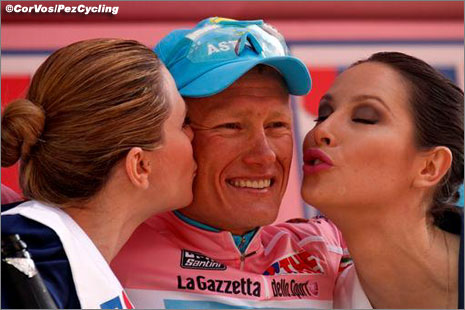 Alexandre Vinokourov will start Wednesday’s TTT in pink – his Astana team gets the honor of starting last.

Lots of riders lost time today due to the course with its narrow roads, cross winds and dangerous corners; let’s hope things are safer back in Italy. Stay tuned for Gord’s day in Holland.