Race Report: Another wet and miserable day, but this time with lots of mud thrown in for good measure. Today the riders looked like they had ridden Paris-Roubaix, you couldn’t tell one rider from the other, but Evans and Vino stood out from the crowd. All the riders today were hero’s…unbelievable!

Today’s Course
The road from Carrara to Montalcino is 220 kilometres, sound simple, it’s far from it as the riders have to cross the mountain pass of the Passo del Rospatoio, but this was only part of the story. The main difficulties of the day are in the last 30 kilometres with the un-made roads used for the L’eroica around Bilbiano (Strade Bianche) and the rough road climb of the Poggio Civitella (15%) which is dust spitting distance from the finish line. Basically a hard-man’s day in the saddle. They should have gone over the Volterra, but a large landslide closed the road, so the race has been cut slightly shorter. 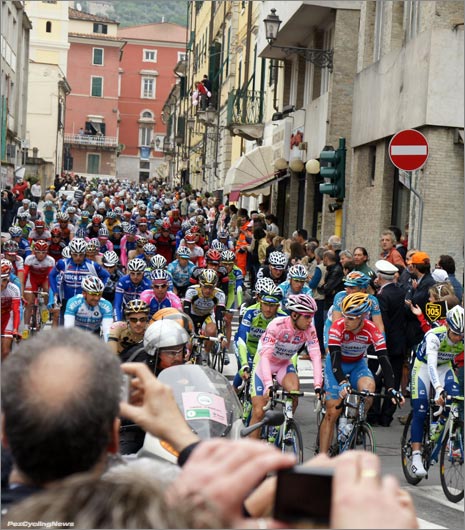 Despite rain falling all around, the roads were dry in Cararra for today’s 220km stage start.

How It All Unfolded
During the long flat section of 120 kilometres down the Mediterranean coast there were a few failed break-aways due to the high speed. A dangerous group of 16 escaped just after Pisa (55Km) for 14 kilometres, but were back in the fold before Pontedera (75 Km). The first serious break came at 80 kilometres out from Carrara with Nicki Sorensen (Saxo Bank) and Rick Flens (Rabobank), the two bankers built up a lead of 8 minutes as they passed the 130 kilometre mark with Lampre chasing behind in dreadful weather conditions.

At 72 kilometres to the finish Flens had to change bikes, Sorensen waited for him and they carried on together into the wet gloom. The bunch slowly pulled the two escapees back as Katusha and Lampre had decided the speed had to be lifted before the gravel sections, this caused a split with favourite Carlos Sastre (Cervelo) in a chase situation.

54 kilometres to go and the lead was down to 2 minutes and 40 seconds as they approached the Passo del Rospatoio. Lampre, Liquigas and Milram all had men near the front as Katusha kept the pressure on making it difficult for Sastre and Pinotti (HTC) to regain the main bunch as they were nearly 1 minute in arrears.

Astana took over the proceedings for a very keen looking Alexandre Vinokourov who was many people’s favourite for today’s stage after his win in Liege. Sky launched Dario David Cioni off the front and as an ex-mountain biker he should be good on the rough roads. Flens and Sorensen were caught at this point (41.5 Km) on the climb, behind many riders were struggling on what is not a monster climb due to the high speed.

Cioni was not allowed too much space and was caught before the top of the Rospatoio, the good news was that Sastre, Tondo and Pinotto made it back the front. Bad news; Nibali (Pink Jersey-Liquigas) crashed on the descent and had to change bikes, first with a team mate and then another from the car. This caused more splits, but Vinokourov and Garzelli were not willing to take advantage of the situation, but did stay with the front riders.

By 30 kilometres the Pink jersey group were chasing at 1 minute 17 seconds and the most dangerous part of the stage was still in front of the riders:

The Strade Bianca
The mud was flying as the riders hit the “Hell of Tuscany”; riders were slipping on the corners through the slime. Garzelli, Vinokourov, Gerdemann (Milram) and Bekelandts (Omega) were leading with a larger group including Evans, then a big gap back to the Nibali group. As they come off the mud for a respite of tarmac the two front groups got together, putting 20 or 30 mud soaked riders together 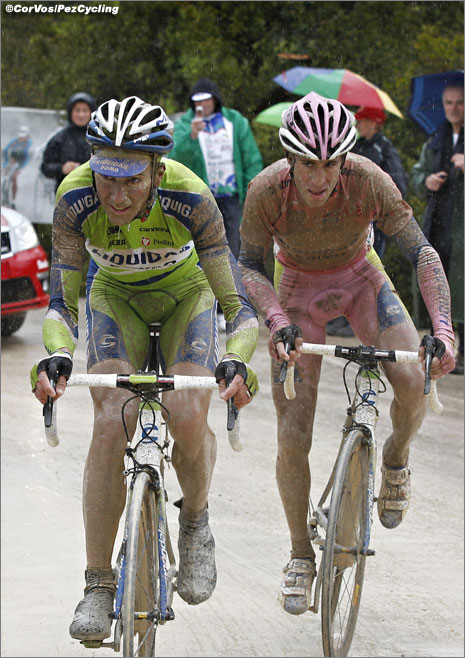 Cunego wanted to put distance between him and the others at 20 kilometres out and was first into the second section of mud. Nibali was not giving up without a fight and had three team riders with him, but he was over 1 minute behind the lead.

The Vinokourov group had Millar, Garzelli, Evans, Karpets, Pozzato, but with all the mud on the jerseys it was nearly impossible to recognise anyone. Vinokourov thought it was time to go on a sharp rise, Evans jumped on his wheel and the two fought on, Vino seemed to be struggling with grit in his eyes, all the riders needed to take their glasses off for some visibility.

Vino, Evans and Garzelli caught the Cunego group to put 7 up front, Pinotti, Arroyo (Caisse) and Gadret (ag2r) made up the others. Nibali and Basso were not getting back and were stuck at 1:40 and more riders in between at 28 seconds.

8.5 kilometres from the finish and Vinokourov and Evans attacked as they neared to top of the climb and the end of the mud section, Arroyo crossed to them as the other four suffered. Evans was the strongman doing most of the work with help from Vinokourov, Arroyo was sensibly sitting on.

At the top of the 2nd Cat climb Cunego and Pinotti got across to Evans, Vinokourov and Arroyo, Vino was worried that the others would get with him; so he attacked to lose Pinotti and Arroyo, this worked on the uphill, but they were all back together on the descent.

The Last K
Tight corners and cobbles put Evans on the front with Cunego on his wheel, Cunego (and Lampre) needed this win, but then as the road widened Evans kicked out of the last corner in a big gear, no one could get near the flying World Champion, Cunego and Vino had nothing left and had to make do with the lesser places.

Riders were coming in, in one’s and two’s, the pink jersey was impossible to see through its covering of mud, he came over the line 2 minutes behind Evans, Sastre at 5 minutes, the others…who knows! 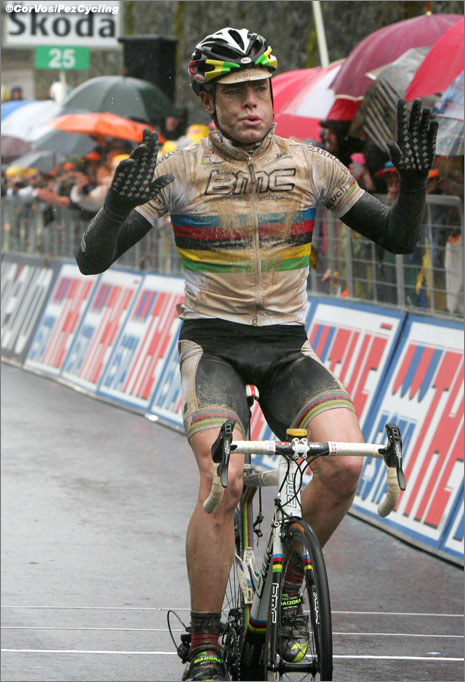 New Pink jersey for Vinokourov, Evans second and a great ride by David Millar to put him third overall. Ritchie Porte is back in the young riders jersey.

Stay tuned for Ed and Mertins’ Pez on the Giro day.

Giro di PEZ: A Day We’ll Talk About For Years