Race Report: Rain…and lots of it! A day of wet weather and deep puddles, but the stage was not short of final action. A slightly up-hill sprint finish and Matthew Goss flew past a sprinting Evans and Vinokourov to take a third stage for the men down under. Three stages and three jersey leaders (yesterday) for Australia! Another shrimp on the barbie, cobber!

It’s not often you see the 1st and 2nd overall riders sprinting it out at the end of a Grand Tour Stage, but that’s what transpired today in the Giro. A ragged bunch sprint saw Evans and Vino hit the front, then a fast lead-out from David Millar for Tyler Farrar allowed Matt Goss followed by Filippo Pozzato to shoot past for the Aussie to take the victory. Still no home win from an Italian, not sure I’d like to be an Australian living in Italy!

Le Tappe
Today’s stage is 187 kilometres of rolling roads, with a slight rise (3%) for 5 Km’s to the finish and a bad road surface, this is a transitional stage, basically following the route of the main autostrada south from Frosinone past Napoli to the finish at the coastal town of Cava de’ Terreni. Lots of history in this area recently made a World Heritage site with some small museums housing Roman artefacts, famous religious paintings in the Domo and there is a funicular railway up the mountain, back from the coast. Better weather was predicted for today, but the word back from Ed and Martin out on the course was that it was raining…again. 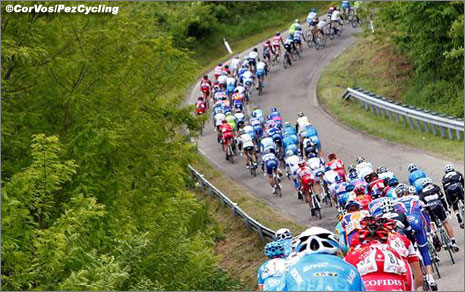 The Early Action
After 9 kilometres four riders took their chance and gained a maximum gap of nearly 3 minutes, but they were not allowed to get far in front and were slowly pulled back Astana. Live TV today was a little late today, but no one at RAI seemed too bothered as Giampaolo Cheula (Footon), Tom Stamsnijder (Rabobank), Michael Barry (Sky) and Mikhail Ignatiev (Katusha) ploughed their way through the rain. The dancing girls on the finish line were quite entertaining wearing what looked like pages of the Gazzetta dello Sport!

With 80 kilometres remaining the four leaders were only 1 minute 40 seconds ahead of an Androni Giocattoli lead bunch with Astana and Liquigas in close attendance, the sprinters teams at this point were keeping their powder dry, but Garmin and HTC-Columbia were not too far behind.

Stamsnijder took the sprint with 63 kilometres to go and the lead was down to 40 seconds, the front of the peloton was looking a bit more animated as a few riders tried to jump away through some deep puddles, they were soon captured by the ever vigilant Astana team to keep it together leaving the four up front for a little longer. The big obstacle of the day has been the water on the road surface, very deep, but the riders are making swimming motions with their hands, so their sense of humour hasn’t been dampened. 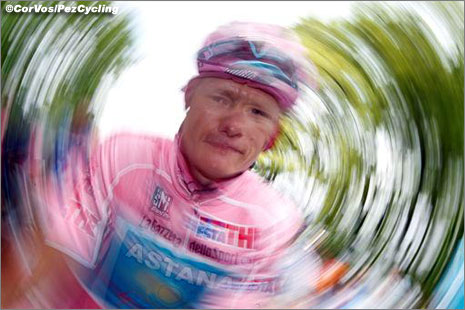 The gap opened up again to 2 minutes with 48 kilometres to go, HTC took over the chase work and had the lead four back to 1 minute 49 at the 40 kilometre mark in heavy, heavy rain. By 30 kilometres there was no change, except the rain seemed to get heavier, if that’s possible! The lead at this point was 1:15.

Last 20 Km’s
Astana and HTC brought the advantage of Cheula (Footon), Stamsnijder (Rabobank), Barry (Sky) and Ignatiev (Katusha) down to 50 seconds as Cervelo’s; Carlos Sastre’s bad luck continued with a puncture at the wrong time. Barry and Ignatiev were the strongmen of the leaders as Cheula was suffering, but none were missing their turn on the front.

A split occurred in the peloton through the town of Sarno, HTC and Astana where on the front, Evans, Basso, Garzelli and Scarponi had missed the bus and needed to give it 100% to catch the pink jersey group and not loose precious seconds overall.

10 Left To go
Mikhail Ignatiev attacked as the four were in sight (15 secs) of the now compact bunch, Barry was on him within 2 kilometres, the two worked together as Brandle (Footon) jumped from the peloton, but everyone was together under the 5 kilometre banner. 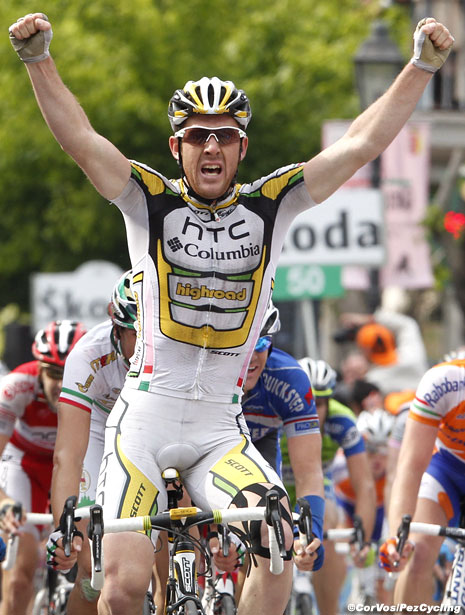 The 5 K’s Of Action
The HTC lead-out train got into action as the course started its rise towards the finish line, Basso pulled next to Vinokourov and HTC lost the front to Quick-Step, Sky, Garmin and Milram making it a sprint for just about anyone. The road stepped up and Bertogliali jumped but Evans and Vino chased him down, on the right of the road Matthew Goss came round them as all eyes were on the two leading overall riders. The Australian was kicking hard as Pozzato tried to stay with him, the better positioned Farrar had no answer to the flying Goss, but the American did get the points jersey back from Evans. Goss was the strongest rider and rode them all off his wheel.

The man from Tasmania said at the finish “the plan was for Greipel to win, but I saw my chance and went for it. Richie Porte is also from my area and we live close in Monaco”, super champs from Tazzy!