Zdenek Stybar and Lars Boom aren’t the only two big name cyclocross racers to successfully make the switch to road. While Jon Gadret is no new comer to the road cycling scene, his win in today’s eleventh stage at the Giro was by far his biggest career victory.

The aggressive, 32 year old has long been a huge climbing prospect, but it was on yet another bright and sunny day at this year’s Giro that everything finally fell into place for the AG2R rider, who has been a professional for nine years now. The Frenchman put in a perfect attack inside the final five hundred meters, swept up Daniel Moreno, the last of the day’s break, and took the win in Castelfidardo. 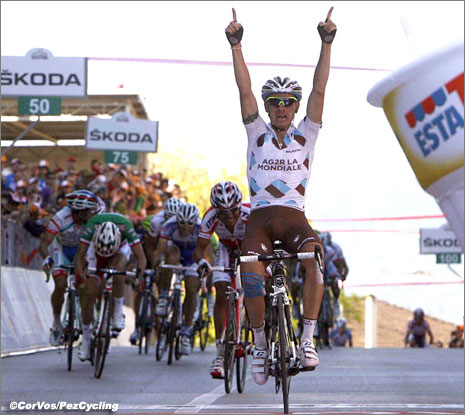 The Giro’s big names were all right behind Gadret – no real time was gained or lost.

Let’s Start From The Beginning
At only 142 kilometers in length, today’s stage didn’t stand out for its duration, but rather the sawtooth profile that included four Category Four climbs and countless other uncategorized ones. The Marche region always ensures an aggressive day in the hills, and that’s what we got.

Before the fireworks began, however, David Millar read aloud a message dedicated to the fallen Belgian sprinter, Wouter Weylandt, and followed that with a minute of silence. Weylandt’s funeral was held today in Belgium. 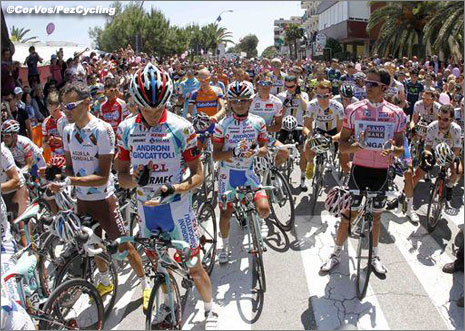 The mood was understandably solemn as the race left Tortoreto Lido, but it didn’t take long for the action to begin, so at least pain could drive away thoughts of #108.

It took ages for the early break to go, and by the time it went, it wasn’t an early break anymore. After countless attempts, a move finally went around the halfway point in the day, and surpassingly, it contained a rider well up on the general classification, Garmin-Cervelo’s Christophe Le Mevel. The Frenchman, who started the day in third overall, 1:19 behind Maglia Rosa, Alberto Contador, was a surprise entrant into the day’s lottery. 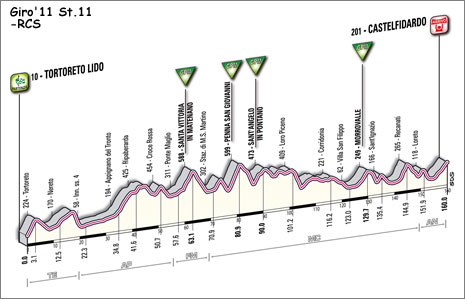 Can you say, jagged?

Even with the presence of Le Mevel, the peloton finally eased up, this was the move. When Lars Petter Nordhaug (Sky) and Tiago Machado (RadioShack) realized this simple fact, they departed the field and bridged across to the break, making it eleven at the front.

The gap quickly grew to over two minutes just after the day’s halfway point on the Monte Vidon Combatte, the second climb of Stage 11.

Le Mevel’s presence drew out Contador and his Saxo Bank team – Contador recently noted that he would be just fine with losing the Maglia Rosa right now, but it appeared he wasn’t keen to lose it today to Le Mevel. With the Saxo Bank team working hard on the front, the gap began to stabilize around the two minute mark, while up ahead, the break members were already testing each other out on the constantly undulating terrain.

With around 40 kilometers remaining in the stage, and the gap still at two minutes, Saxo Bank were joined at the front by teams interested in stage glory: Giovanni Visconti’s Farnese Vini boys, as well as Androni and Astana. The addition of more firepower caused the gap to finally begin to ease downward.

It was around this time that it became apparent that the break’s fate was sealed, which means of course, that one of the break’s denizens would try his luck solo.

Today, it was Daniel Moreno. The Spaniard attacked on the final categorized climb of the Morrovalle, left his erstwhile companions behind, and set about taking his destiny into his own hands.

With 25 kilometers remaining, Moreno had just over a quarter minute, with 15 kilometers to go, it was up to 22 seconds on the break, but the field was only a little over a minute behind.

Things took an interesting turn when Konovalovas attacked from the group of ten in hot pursuit of Moreno. The Lithuanian made quick work of the gap, caught Moreno, then immediately attacked him. Moreno faltered, but with 9k to go, somehow managed to reconnect with the flying young rider.

Despite Moreno’s agonizings on the wheel of Konovalovas, this looked like the move. There were only eight kilometers remaining, and they had nearly a minute. That had to be enough, right?

Unfortunately, almost half of those kilometers were uphill, and Androni Giocattoli were not messing about anymore.

As the two hit the final 3.5 kilometer ascent to the finish in Castelfidardo, they had 44 seconds, but behind, Lampre-ISD were on the front setting a thundering pace…and so the gap tumbled. 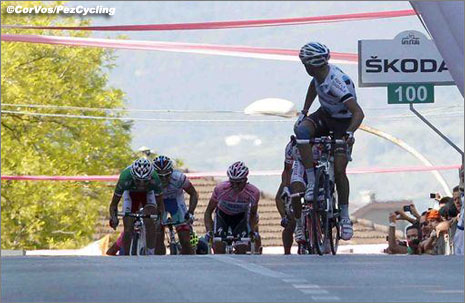 Serial attacker Stefano Pirazzi had another go, but there was nothing doing against the collected might of the fuchsia and blue boys of Lampre.

One thousand meters to go and the duo out front had twelve seconds – could they do it?

Moreno, who had spent much of the recent kilometers groveling on the wheel of Konovalovas, found something deep inside and mounted one last, massive attack – and it looked good.

It looked really good, but then Gadret rocketed out of the field in the final half a kilometer, devoured the steepest part of the climb, the gap, and Moreno, then rolled in for a triumphant victory.

Behind, Joaquim Rodriguez looked great, but he left it too late to have any chance to get Gadret. The rest of the favorites were all tightly clumped together. 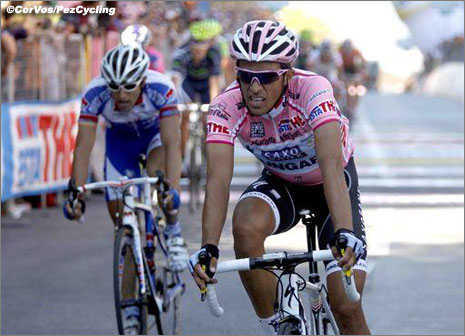 Christophe Le Mevel’s audacious bid for glory didn’t pan out, but it wasn’t a disaster either – he only lost nine seconds in the finale. He’ll likely be a bit sore tomorrow, but he certainly spiced up an already tasty stage.